Amy Traverso, senior food editor of Yankee magazine and the host of the PBS series Weekends with Yankee, knows this well. Traverso lives in Massachusetts and grew up in New England. She’s lived in various parts of the US over the years and has embraced many of the Thanksgiving traditions across the country — fresh fruit from the farmers market the day before Thanksgiving in California, for example, and red chilis on the table in New Mexico.

New England, however, is home, and Traverso has gathered a wealth of knowledge about the region’s Thanksgiving history. Not to mention she’s helped shape the idea of a New England Thanksgiving herself through her work writing and editing stories about Thanksgiving culture, as well as creating recipes for Yankee.

We spoke with Traverso about the importance of Thanksgiving in New England and the dishes that best exemplify the region’s traditions.

This interview has been lightly edited for clarity and space.

What are your thoughts on how Thanksgiving is somewhat idolized in New England?

I grew up in Connecticut, and when you’re a kid and you see pictures of Thanksgiving — of the wholly invented notion of the first Thanksgiving and the popular idea of it, which isn’t really based in history.

But you see the landscape [of that notion of the first Thanksgiving] growing up in New England that looks very similar to the landscape I see out of my window. I think New Englanders do feel a sense of the history that happened here.

And how does food play into that?

I’ve always been interested in talking with food historians about what would have been served in the original harvest feast, and you know, it’s quite different from what we eat today.

Certainly turkey would have been an option, along with probably venison. You would’ve seen corn and beans and squash. Not so much stuffing and pumpkin pie, but watercress and dried berries — those kinds of foods would have been abundant.

But I think the idealized classic Thanksgiving menu, which was an invention of the Victorian era, definitely holds a lot of sway [in New England]. People may feel like they need to have a certain set of dishes on the menu for it to feel like Thanksgiving.

That would be the mashed potatoes, the stuffing, the turkey, some form of pumpkin pie, and some form of cranberry sauce.

With such strong traditions regarding the dishes, is there room to play around with the classics?

As a recipe developer, I assume that when I do a menu for our November issue that readers might try one of the recipes — they’re probably not going to make the whole menu. In my experience, people will have that heirloom family recipe that gets made over and over again, but there’s always room for something new, and I think people enjoy a little bit of variety.

Knowing where we are in history and knowing that there’s a lot of scary changes happening right now and a lot of anxiety, I wanted to do a menu for the magazine this year that paid homage to iconic New England foods but put a fresh spin on them.

Those would include apple cider, molasses, cheddar cheese, pumpkin, and marshmallow fluff, which is kind of like a marshmallow mousse that’s very sweet and fluffy and marshmallowy. Growing up in New England, I ate peanut butter and fluff sandwiches, and they’re totally delicious.

So I came up with this menu where the turkey is brined with molasses and has a cider glaze, the stuffing is made with cornbread and brown bread — a classic New England bread that’s sweetened with molasses and made with corn, rye, and wheat flour. We did Brussels sprouts with maple glaze walnut and mashed potatoes with cheddar crisps, and then we did a pumpkin pie that has a layer of fluff so you have a fluff and cream cheese layer and then a pumpkin layer on top.

I’m sure there are people who serve a chowder or incorporate lobster into the meal. Or they might start out with oysters. Oysters would be the most common thing to start with as a light starter or hors d’oeuvres. There is also a tradition of oysters in the stuffing here.

New England is sometimes wrongly considered a monolith. Are there differences between the states or regions when it comes to Thanksgiving?

I think there are various regional differences that you can trace back to the history of the region. In Maine, which is still a major potato growing region, you certainly see mashed potatoes, but also potatoes worked into breads and stuffings. You also see a lot more seafood on your table if you’re in coastal Maine for Thanksgiving.

If you were going to go to Rhode Island, you might start with a clear chowder, whereas in Maine you have a creamy chowder. 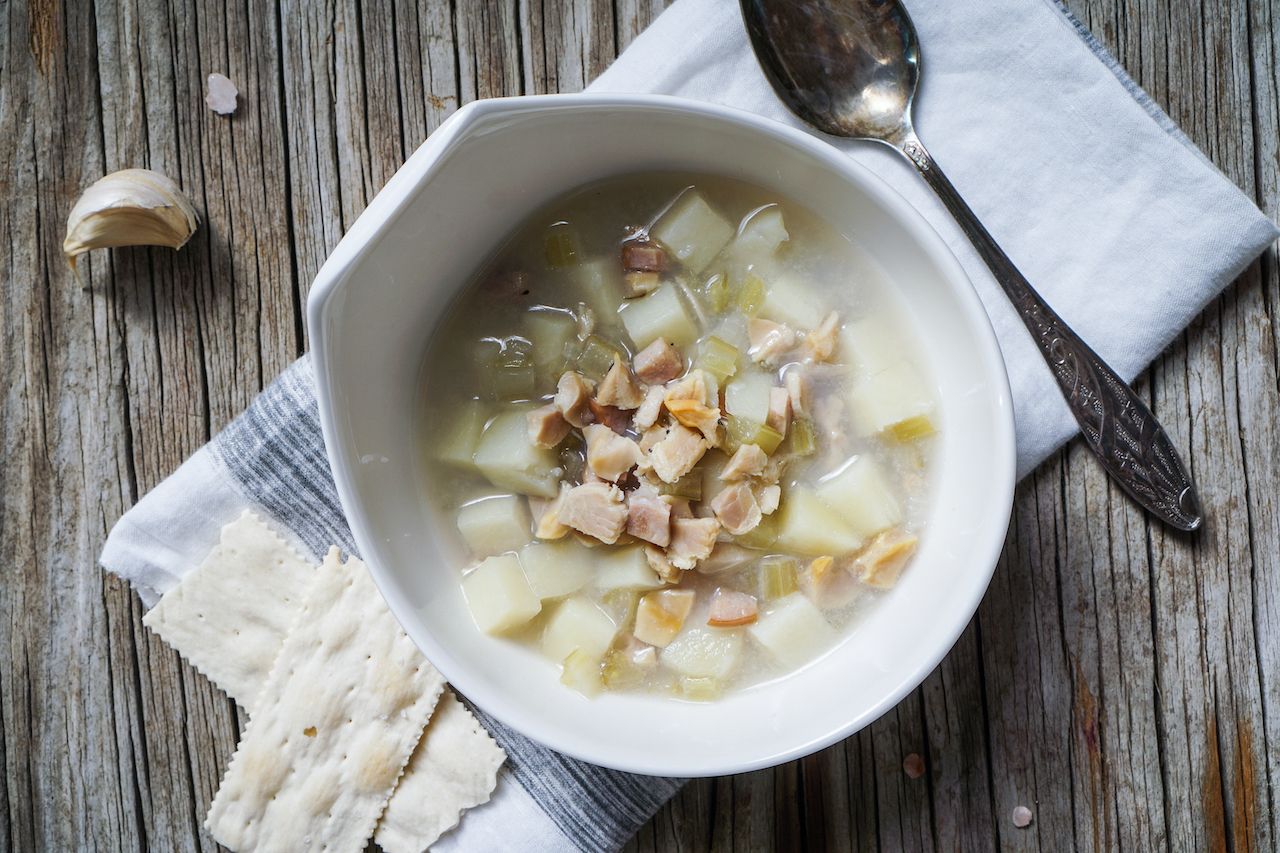 I think a lot of Thanksgiving is one meal and we are kind of sharing similar outlines. We might be vegan, or we might be Italian-American, or might be Somalian-American, and that’s where you’ll see a few of the side dishes that represent our specific cultural background.

New England food is heavily influenced by Portuguese food because there was such strong Portuguese fishing tradition here. Certainly a lot of Italian influence as well, and increasingly Puerto Rican and Jamaican flavors, and there’s a large Somali community in Maine.

So I see more and more of those flavors being folded into [the region’s] food in general, and certainly ingredients like Portuguese sausages show up in stuffing.

It really is a mix, because this is the home of Ocean Spray. I 100 percent grew up with Ocean Spray jellied cranberry sauce. On the other hand, my dad likes to make a simple sauce of cranberries cooked with sugar and orange juice and it’s yummy.

I think the classic jellied cranberry sauce is still pretty dominant. If you really feel strongly about making another side dish, then you would make your own cranberry sauce.

What other canned or prepared ingredients are classic to New England?

There’s a pumpkin brand that’s regional called One-Pie. It used to be made here, but the company was subsumed into a larger food company. It’s basically canned pumpkin and canned squash. [One-Pie was] bought by a company in Illinois, but the can is so cute it hasn’t changed since the ‘40s. I always seek it out — they still pack it under the One-Pie label, and that is the ingredient for your pumpkin pies unless you’re growing your own pumpkins and making your own pumpkin puree.

Bell’s Seasoning is another New England company that’s a very classic way to season your stuffing or your turkey. And that company is based in Massachusetts. Again, very cute vintage packaging with a turkey on the front. One of those childhood memory foods that a lot of people can relate to.