Urban travel often involves contemporary niceties like hip cafes or trendy boutiques. In such cities, the only way to look backward is to visit a museum or take a historical walking tour. But how about challenging yourself to think outside the confines of modern-day cities and planning a trip to the archaeological site of Çatalhöyük, in southern Turkey — to what is considered humanity’s first city. It won’t just make for cool photos. It’ll open your eyes to how our modern urban centers evolved. Here’s how to visit Çatalhöyük and what to expect.

Çatalhöyük presents a vastly different historical experience than you’d find in Istanbul or Ankara. It’s located about 35 miles from the Turkish city of Konya in a region that has been inhabited by humans for over 9,000 years. In its heyday several millennia ago, Çatalhöyük was the world’s first established settlement, bridging the gap between the nomadic hunter-gatherer lifestyle and the more settled way of life brought forth by the evolution of agriculture.

First settled in 6250 BCE and inhabited by nearly 8,000 people, Çatalhöyük essentially was the world’s first prototype of a city. If you consider yourself to be any type of urbanist, historian, or simply someone who appreciates the incredible ability of humankind to adapt and seek progress, the remains of Çatalhöyük are a must-see.

Today Çatalhöyük is an archaeological site, brimming with diggers and researchers. According to the official archaeological records of the settlement, the ruins were first discovered by British archaeologists David French, Alan Hall, and James Mellaart in 1958. The first excavation began three years later in 1961, with various teams leading digs over the ensuing half-century.

Much of Çatalhöyük and other ancient settlements nearby are unrecognizable today, worn away by time. Sedimentation has buried much of the remains several feet under the surface. But what has been preserved can be viewed in its post-excavation state, with a brochure available at the visitors’ center to guide you through the site.

How Çatalhöyük paved the way for today’s cities 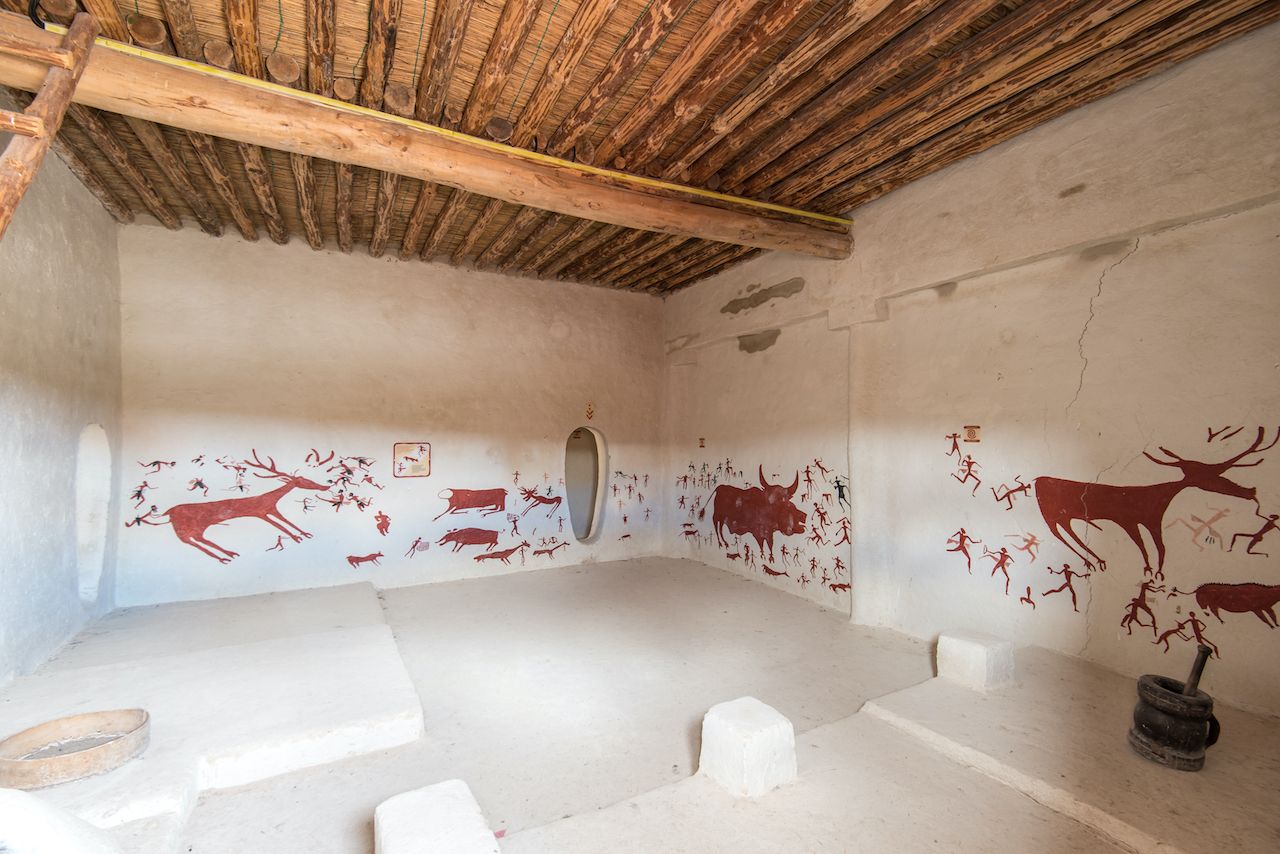 Çatalhöyük contained much of what we still have in cities today, such as houses, common areas, and waste disposal spots. The main thing missing was roads. The houses of Çatalhöyük, each about 80 square feet, were built directly adjacent to one another, separated by walls made primarily of mud. Each had a mudbrick flat roof with a smoke hole, which also served as the entrance and exit for residents who climbed up and down on a ladder. Scientists believe that the city was the center of many religious festivities, as evidenced by wall paintings depicting ritualistic practices. These images include images of people portrayed as bears and other “tough” animals out on the hunt.

Within the settlement, you can visit three sections. The first is an archaeologist-built model of a typical home in Çatalhöyük. You can see the mudbrick walls used to form the exterior of each home, along with recreations of where residents likely slept, cooked, and performed family tasks. Adjacent to the home is a museum containing finds from the various excavations. Here you’ll also find historical information that puts what you’re looking at into context. 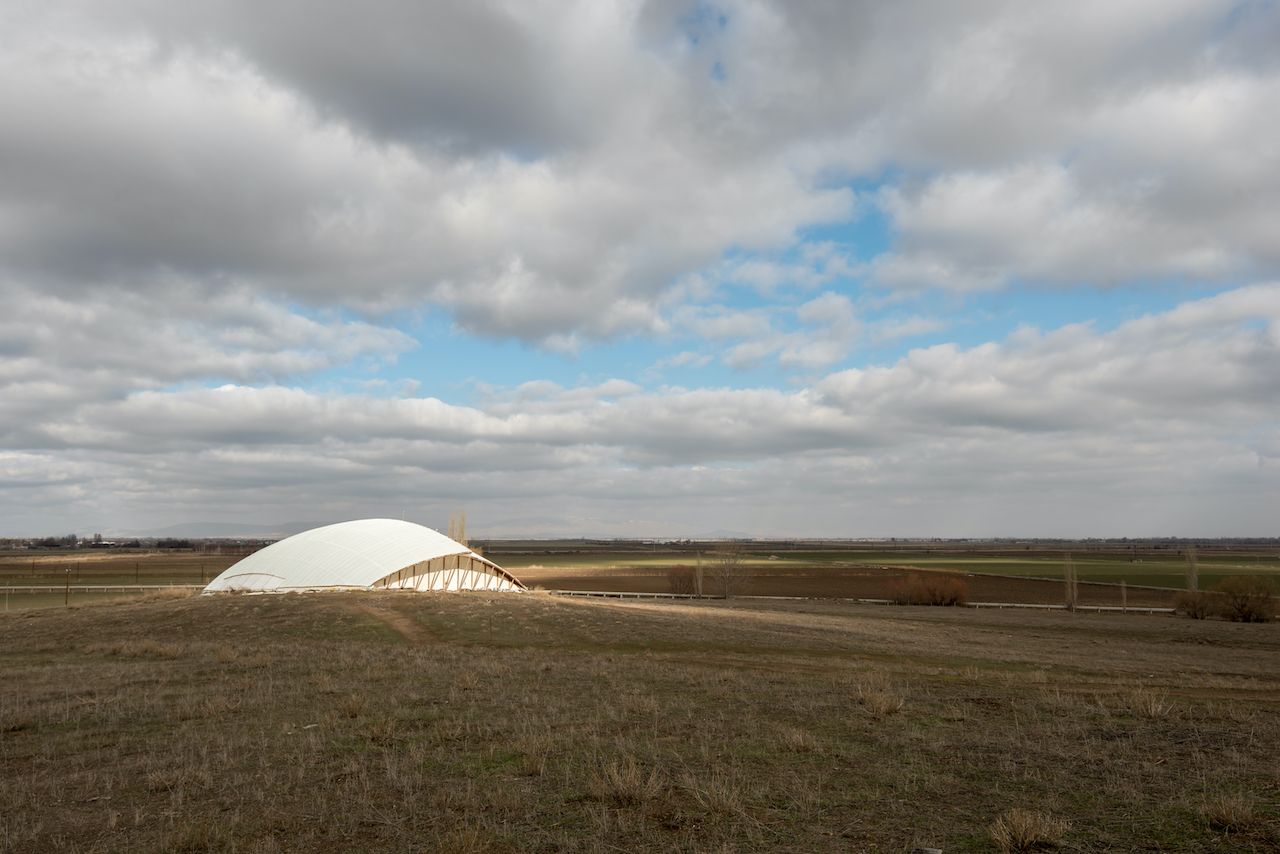 Finally, you’ll make your way to an actual excavation site protected by an unenclosed dome roof. This “settlement mound,” as it’s known, is called the North Shelter and is the most well-preserved ruin at Çatalhöyük. You can see the remains of original housing in its single-layer block formation. The South Shelter, a short walk from the North Shelter, is where archaeologists uncovered handicraft works that now sit in museums here and in Turkey’s capital of Ankara. All visits to the ruins themselves, as well as to the replica home, are led by a guide.

How to visit Çatalhöyük 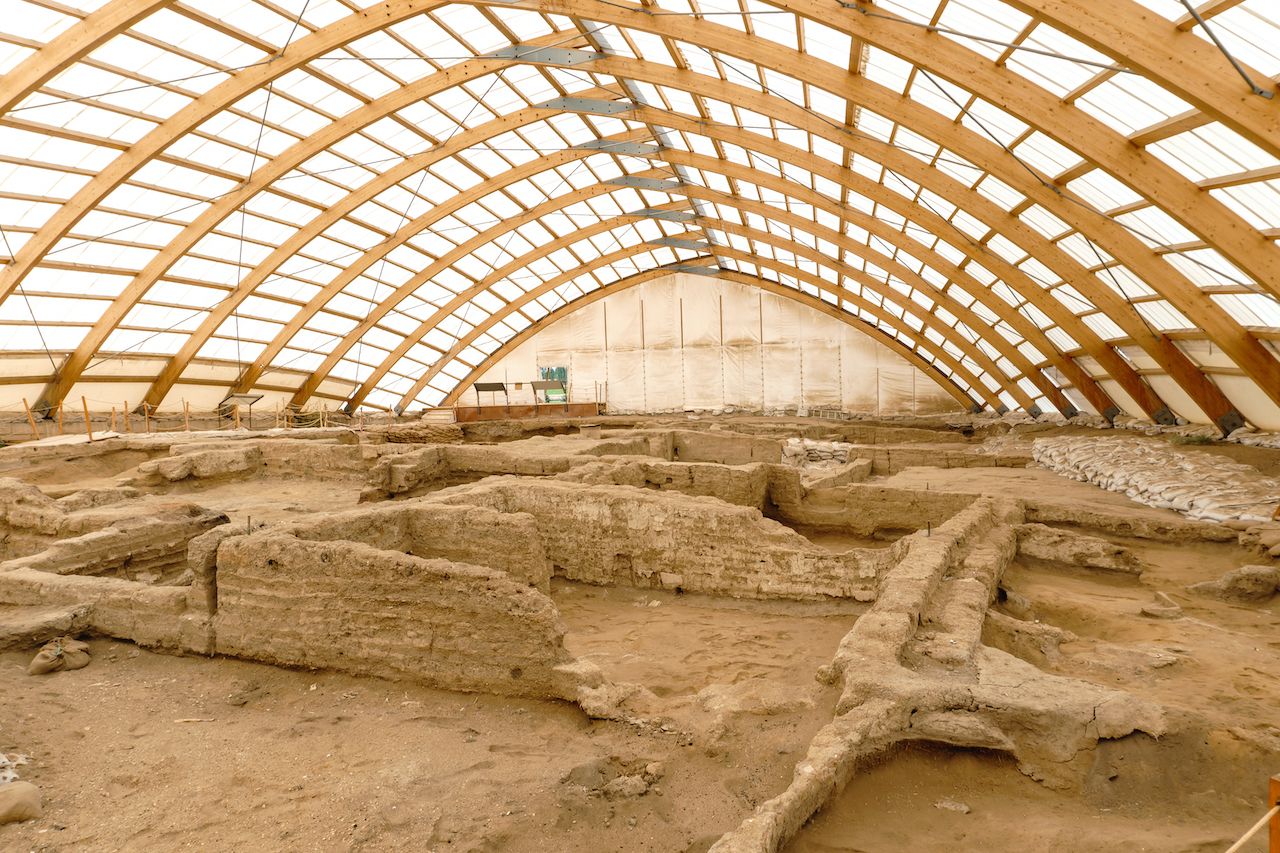 Getting to Çatalhöyük takes about an hour from Konya by car via highway 715. If you don’t have a car, you can travel via taxi from Konya for about $36 round trip, including an hour’s wait time while you tour the site. If you travel by taxi or personal car, allow three to four hours round trip, including transit and time to experience the site. You can also travel by bus from Konya’s Eski Garaj minibus station to Cumra, and take a taxi the rest of the way, to save about $10. If you don’t make it down to Çatalhöyük, or want more context on what you’re seeing, some archaeological finds have been moved to the Museum of Anatolian Civilizations in Ankara.

ArchaeologyThe Most Epic Pyramids and Ruins in Mexico’s Yucatán Peninsula
Tagged
Archaeology Turkey
What did you think of this story?
Meh
Good
Awesome