“Nikkei” just sounds like a word people are going to use wrong.

You can almost hear a half dozen people sitting around a violet-lit table in some SoHo hotspot asking stuff like, “Is the octopus tonight Nikkei? Perhaps you could go back and ask the chef.”

While the waiter looks on confused another chimes in, “Kylie ONLY eats Nikkei now. It’s like sushi, but lower-carb.”

“And, like, all the fish has to be flown in from Peru,” says another.

“And they mix it with six different kinds of pomegranates,” another pipes up over a Martini. “Nikkei is everything.”

Theoretically, everyone in this hypothetical situation is right. Nikkei could be everything. With barely a century of history and only a handful of restaurants serving it, there’s not enough tradition to really say what Nikkei is and what it isn’t. That’s not to say Nikkei is the next ambiguous non-term restaurants throw on their menu to sound avant-garde, like “farm-to-table.” But it’s a lot harder to define than, say, Chinese food, which we all recognize when we see it.

Even those who make this Japanese-influenced Peruvian food don’t often have a straight answer when you ask them what makes something Nikkei. Yet as it’s become the hottest trend in restaurants over the past year or so, chefs around the world are quickly finding their own definitions.

How Nikkei was invented 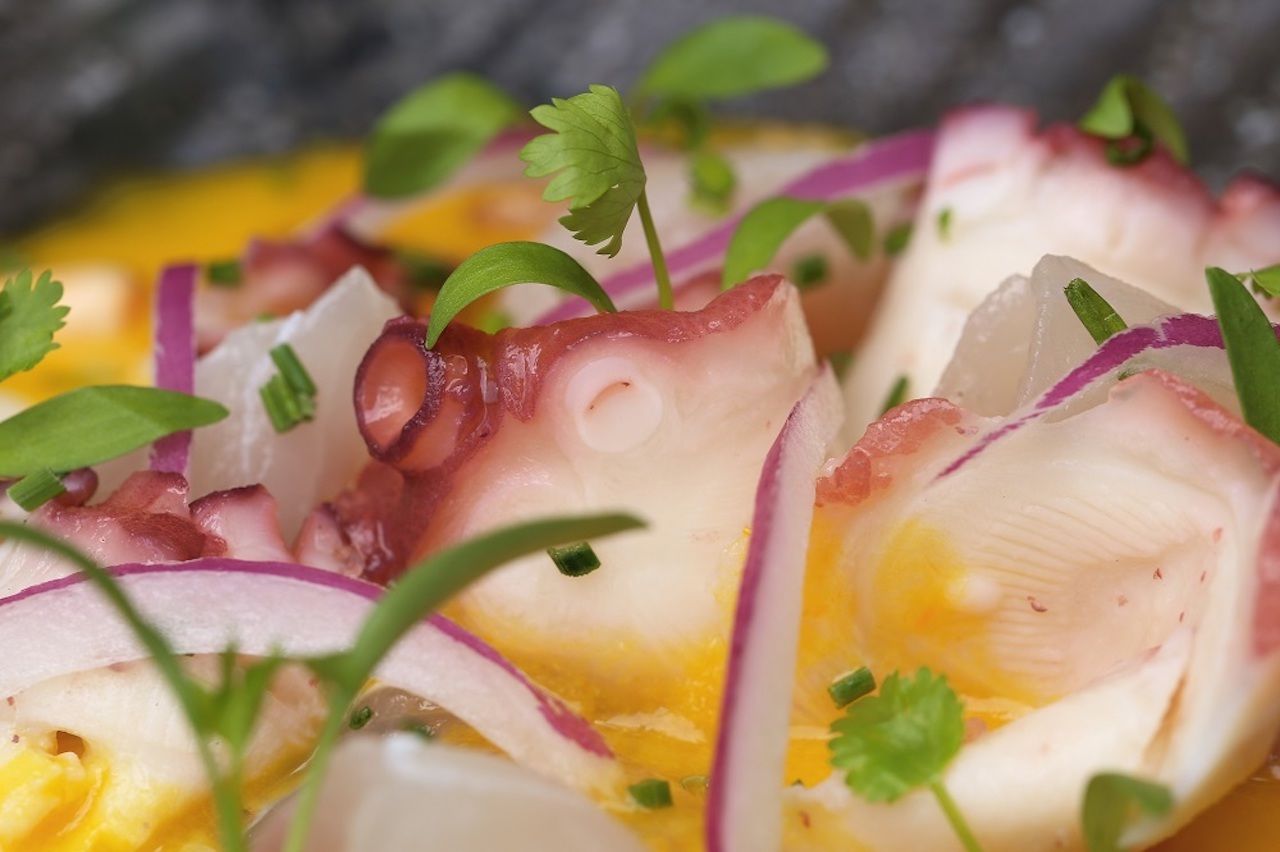 “Nikkei” isn’t a cuisine name at all, but rather a term for Japanese people living outside Japan. Nikkei the food started with the Japanese who moved to Peru around 1889 to work in the sugar cane fields. Some of the immigrant community that came opened restaurants. Lacking many of their traditional ingredients, they began using Japanese cooking techniques with stuff they could find locally.

Take the thinly sliced, ceviche-like fish dish called tiradito, for example. It’s flash-cooked in citrus and has become a staple on Nikkei menus. It’s commonly served with jalapeno, an ingredient added from Peru.

“Ceviche is Peruvian, through and through,” says Kurt Zdesar, whose Chotto Matte restaurant brought Nikkei cuisine to London, Miami, and soon Toronto. “Peruvians had limes in abundance, and it allowed them to preserve fish. The ceviche you’d consider Nikkei now is not about preserving, it’s about adding flavor. So maybe instead of lime, you’re using yuzu. It’s an inspiration that that’s evolved from Japanese techniques.”

This might lead one to think the acceptably loose definition of Nikkei is Peruvian food made with Japanese techniques. But even that is a little too restrictive.

“This is octopus, Peruvian olives, olive oil, and avocado,” Oka explains as he shoves the pulpo in his mouth with a cracker. “There are no Japanese ingredients in this, but it was created by a Nikkei chef, Rosita Yiruma, [who’s] super famous. It’s not a Peruvian dish, but it’s from the Nikkei cuisine.”

He also mentions a black snapper cooked in a salt crust from Humberto Santo, another Peruvian Nikkei chef.

“It’s so new, there are no traditional recipes,” Oka says. “Each chef represents what they think is Nikkei food. It’s a fusion but could be a confusion if you do it wrong. You have to respect the Peruvian culture and the Japanese culture. You can’t just put soy sauce on this salad and say it’s a Nikkei salad. Or if you cook a sushi with ceviche, you have to respect the rice. The technique. The fish. Then do the leche de tigre respecting Peruvian flavors, then merge it.” 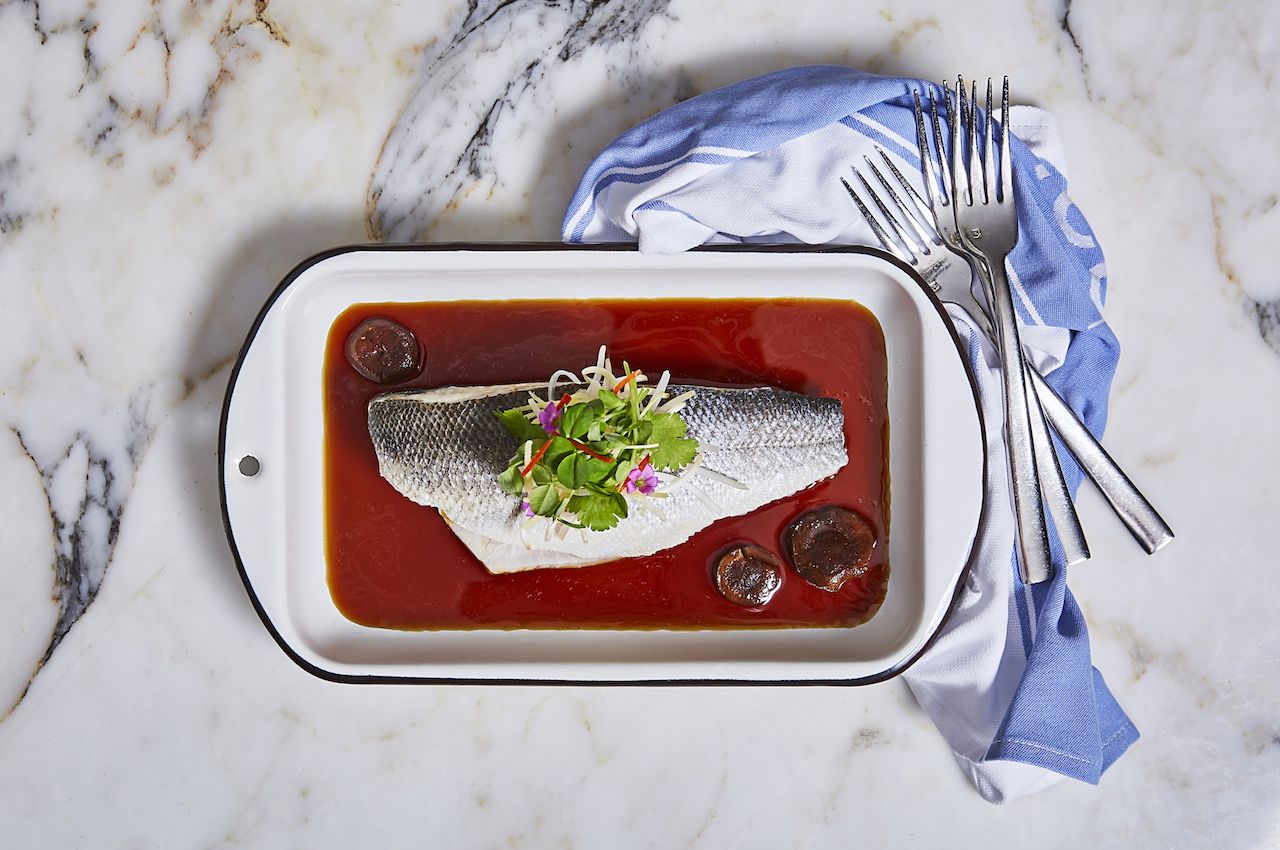 Though Nikkei restaurants seem to be popping up like gourmet burger joints were five years ago, the style wasn’t found much outside of Peru until the 1980s. That’s when a sushi chef from Lima’s Matsuei opened his own spot in Los Angeles. His name was Nobuyuki Matsuhisa. The restaurant, Nobu.

Nobu was the first to really bring Nikkei to America, later joined by fellow fine dining chain Zuma. But it wasn’t until recently it’s become available to people who can’t afford $250 a person for dinner.

Now you’ll find spots like Susheria in Washington, DC, which has an approachable menu of Nikkei dishes. Vegas has a Nikkei restaurant called Once in The Venetian that’s owned by Ricardo Zarate, one of the guys who helped open Zuma. You can even find Nikkei in food halls, like Itamae in Miami’s St. Roch Market. Its chefs were just nominated for James Beard awards.

“When we first opened, I had to educate the market that this wasn’t Japanese, it was Peruvian-Japanese,” Chotto Matte’s Zdesar says. “Now in London, there’s probably 20-30 places doing the same thing.” 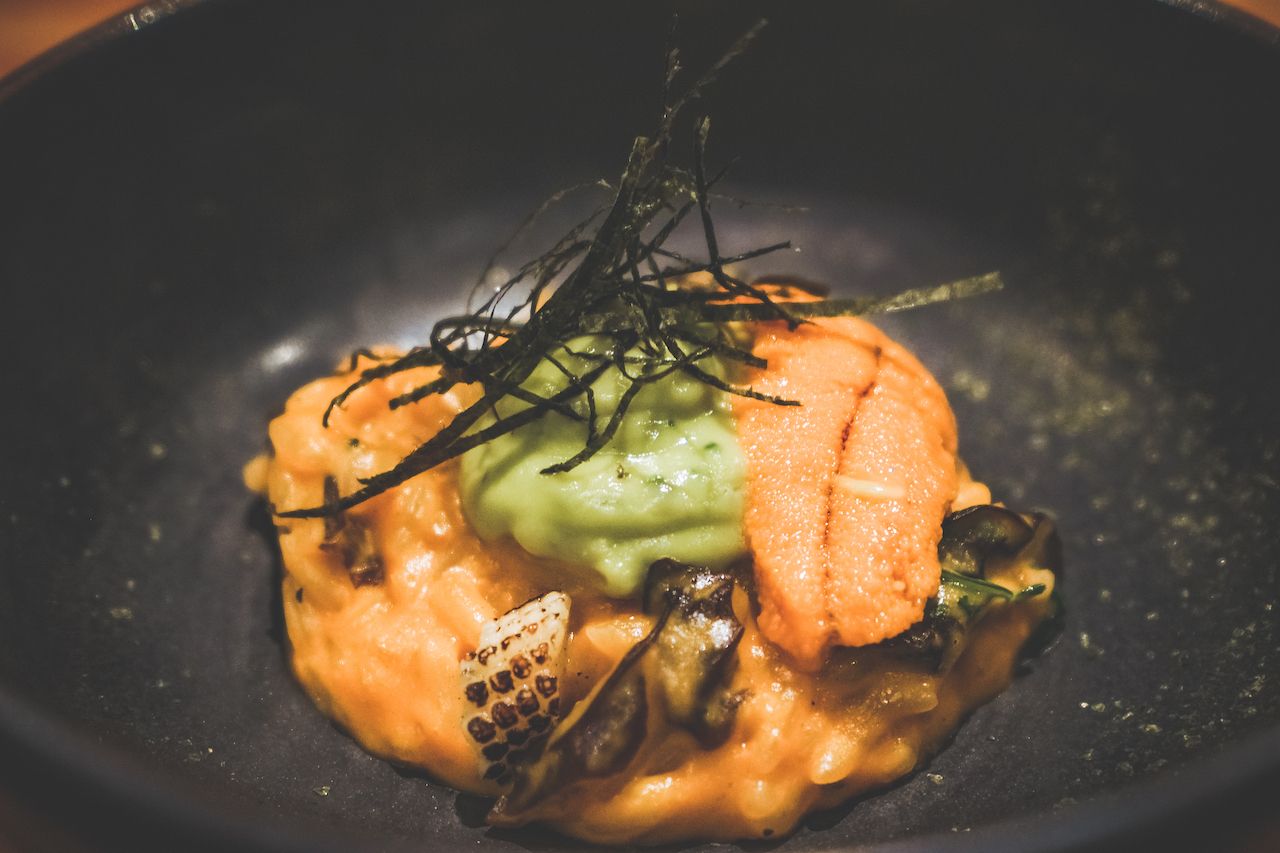 So why, all of a sudden, is the world in love with a 100-year-old cuisine they just discovered? Some of it’s fueled by an interesting twist on the familiar.

“Nikkei cuisine can go all over the world because even if people don’t know Peruvian food, they know Japanese food,” says Zarate, who owns Once. “But it’s a very different flavor profile, so it’s attractive to anyone in the world.”

Part of the growth has also come from Lima’s recognition as a world-class culinary destination. Its two most notable Nikkei restaurants, Maido and Central, both landed in the top 10 of San Pellegrino’s vaunted 50 Best Restaurants in the World list. Ask anyone who’s just been to Lima how the food was, and it’s like asking someone to tell you about Crossfit.

Even if you don’t have time to listen (or to get to Lima), just hearing about the flavors will get you excited about Nikkei. 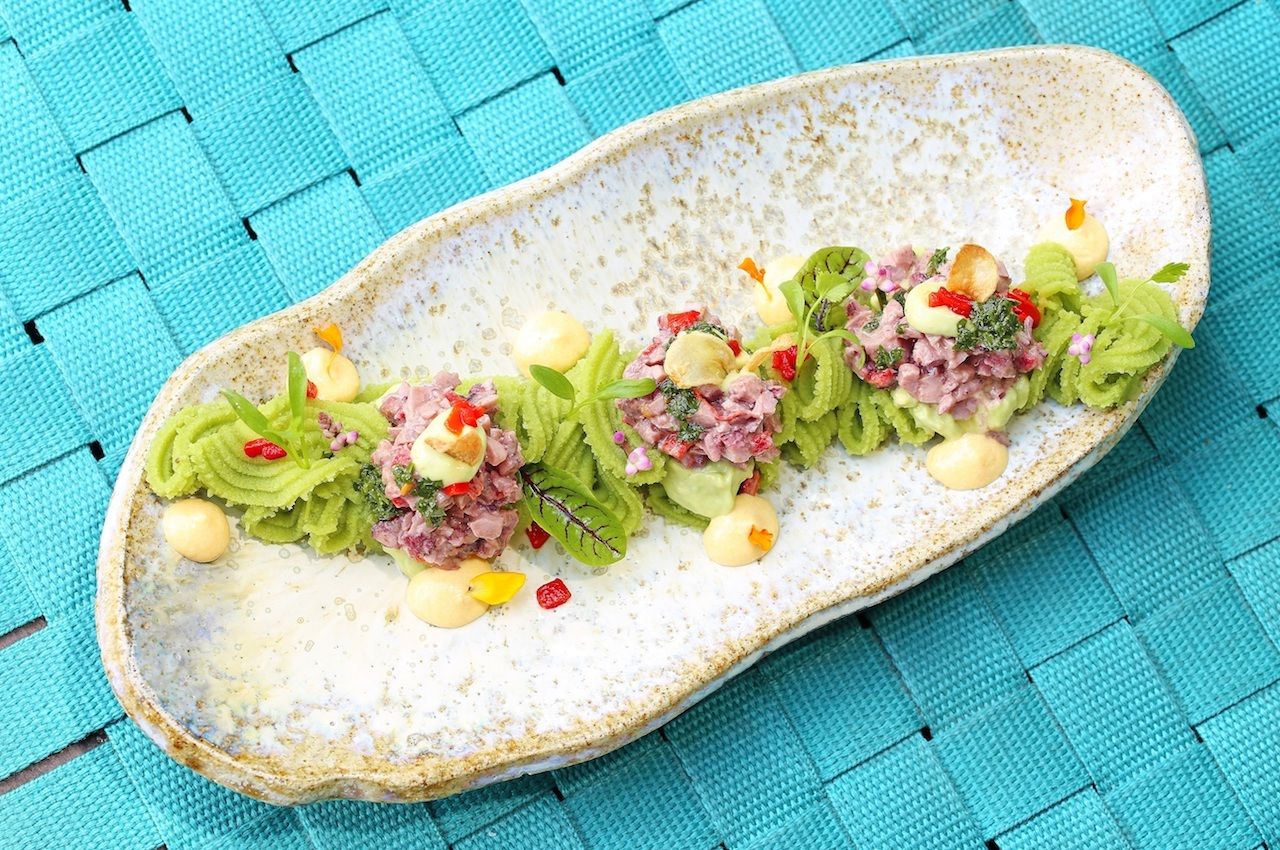 But Nikkei’s popularity may have as much to do with its low-carb, low-fat dishes as it does how good it tastes.

“It’s super popular because it’s easy to eat again and again,” says Chotto Matte’s Zdesar. “There’s no creams or fats in this food. It’s really lean but full of flavor.”

Because the food is healthy, Zdesar surmises, people will eat at a restaurant more often because they won’t be weighed down. Which means more repeat customers for restauranteurs.

“I think I eat every day in this restaurant, and I always look forward to it. So I know that means it can be eaten regularly,” he says. “If a customer came for dim sum once a month, they’ll come once a week for this, easily. With the same audience we have a much bigger appeal, and more regularity.”

This is why other spots, like Susheria, have their eyes on expanding far past America’s culinary hotspots.

“I don’t think there’ll be one on every corner, but I can see four or five in major cities,” says Susheria owner Mauricio Fraga Rosenfeld. “That’s our plan, to move city to city. I’ve seen some other [restaurant groups] doing more casual dining. So it may become more of a casual thing.”

As health-conscious and Keto-crazy Americans begin to discover this crazy little Latino-Asian hybrid we call Nikkei, it’s likely to become even more accessible. Though the rules for what it is might be loose, the flavors are unique, and the style hasn’t yet reached sushi-level saturation. Whether it continues its momentum or evolves into something else remains to be seen. But as long as people keep talking about it (even without knowing what it means), it’ll remain hot.

Food + Drink15 Peruvian Foods so Delicious They’ll Blow Your Mind
Tagged
Restaurants + Bars
What did you think of this story?
Meh
Good
Awesome

English Pub Rules That You Don’t Have To Follow in an American Bar
Every Michelin Star Restaurant in Las Vegas and How Much They Cost
The 7 Best Places To Eat in New York City’s Chelsea Market
14 Bourbon Street Bars You Must Visit When in New Orleans
The 10 Best Rooftop Pool Bars To Soak Up the Sun in Austin, Texas