Peru, and Lima in particular, has one of the great culinary cultures of South America. There’s so much happening in the country gastronomically, from traditional Incan dishes to exciting new fusions inspired by the many peoples and cultures that make up modern Peru. Take, for example, the innovative Nikkei, or Peruvian-Japanese food, that has influenced restaurants across the Americas. Or just look to the many thought leaders who have called Lima a culinary capital for years, even before the city’s Central Restaurante, the highest-rated South American restaurant on the World’s 50 Best Restaurants list, opened.

Whether you’re looking for a multi-course meal or prefer street stalls and holes-in-the-wall, Peru has you covered. These are the 15 classic dishes you don’t want to miss in your exploration of Peruvian food.

No list of Peruvian food would be complete without the national dish. Small chunks of raw fish are marinated in lime juice and served up with sweet potato, corn, onion, chiles, and cilantro. While it’s not cooked with heat, the acid in the lime denatures the proteins in the fish and turns it an opaque color similar to how cooking it over heat does. For an authentic ceviche experience, skip the upscale eateries and instead head to Lima’s bustling Central Market, where pop-up cevicherías offer generous bowls of the freshest ceviche in town. A treat for all your senses, you’ll be surrounded by the smells of the fish market and the sights and sounds of the vendors vociferously advertising their dishes. 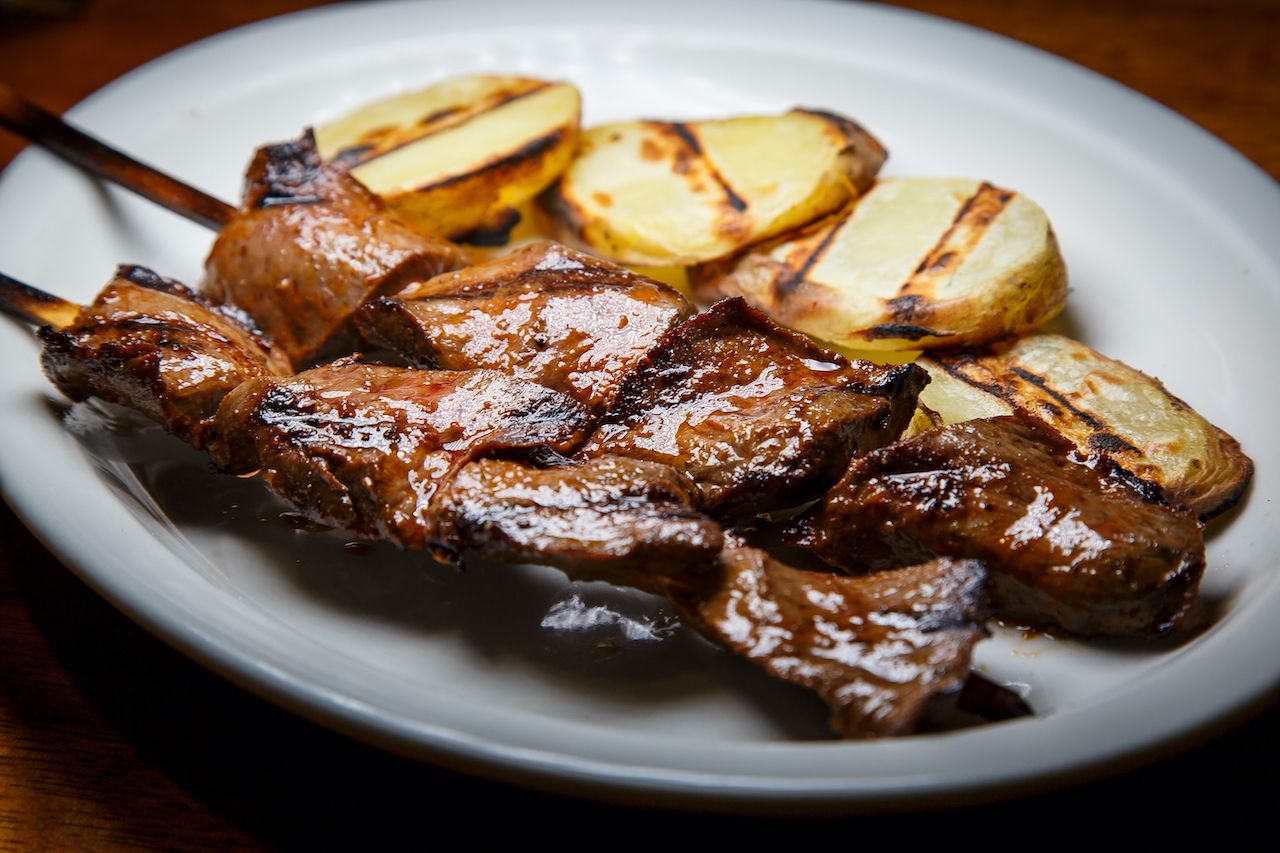 These succulent cuts of beef heart are marinated in a blend of spices and grilled on an open fire. The texture and taste is similar to a tender center cut of beef. Just follow your nose to the origin of the grill, which is usually part of a popular street food stand. A modest Lima hole-in-the-wall with a reputation for the best anticuchos in town is Grimanesa Vargas, run by Señora Grimanesa, who’s been making them in Lima for over 40 years. Anticuchos de corazon is a delicious place to start for anyone who is curious about adding more offal to their diet.

Paiche is a beast of a river fish that’s known as the king of the Amazon. It can grow to more than nine feet in length and 400 pounds, making it one of the largest river fish in the world. It also happens to be delicious, and people along the Amazon have been eating the fish for centuries. The meat is firm with an earthy flavor, and it can stand up to a number of preparations. In Peru, you’ll find paiche grilled, roasted, and served in the country’s famous ceviche. 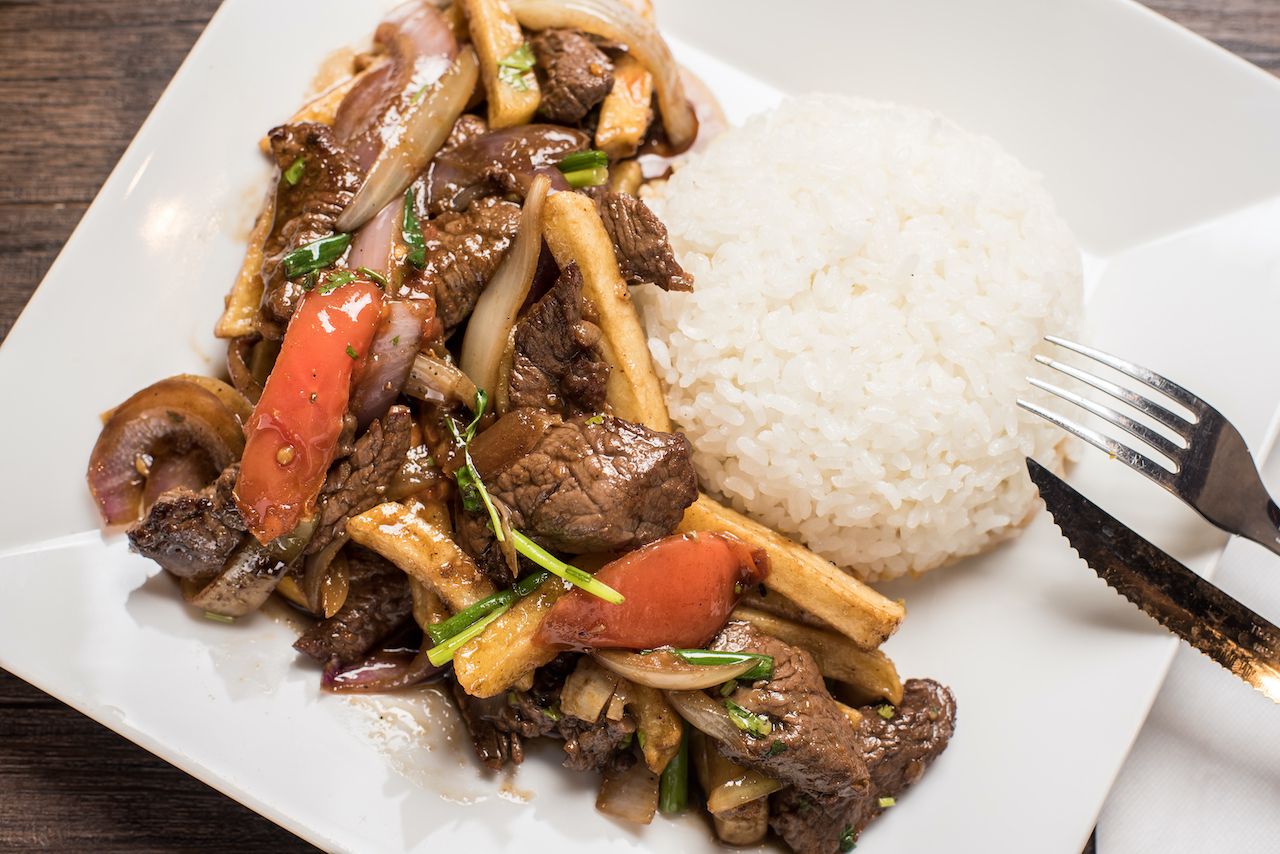 Lomo saltado is essentially a beef stir-fry with a Peruvian twist. This national favorite brings together chunks of tender steak, tomato, onion, and aji amarillo (a flavorsome Peruvian chile) that’s all flash-fried in soy sauce. Rather than served over rice, this stir fry comes with potato or cassava fries and a fried egg on top. The notable Chinese influence in Peruvian cuisine is evident in this dish, and it’s part of the Chinese-Peruvian food tradition known locally as chifa. Lomo saltado is a hearty lunchtime staple on many Peruvian tables. Look for it on cheap menu-of-the-day specials at restaurants across Peru.

Peruvians are serious about their stews, with many regional variations and takes that you’ll only find in one area. One you want to keep an eye out for is adobo de chancho, a rich pork stew from the south of Peru. The meat is marinated in chicha de jora, a fermented corn drink that dates back to the Inca. It’s then slow cooked with tomatoes, onions, cumin, chile, and oregano. 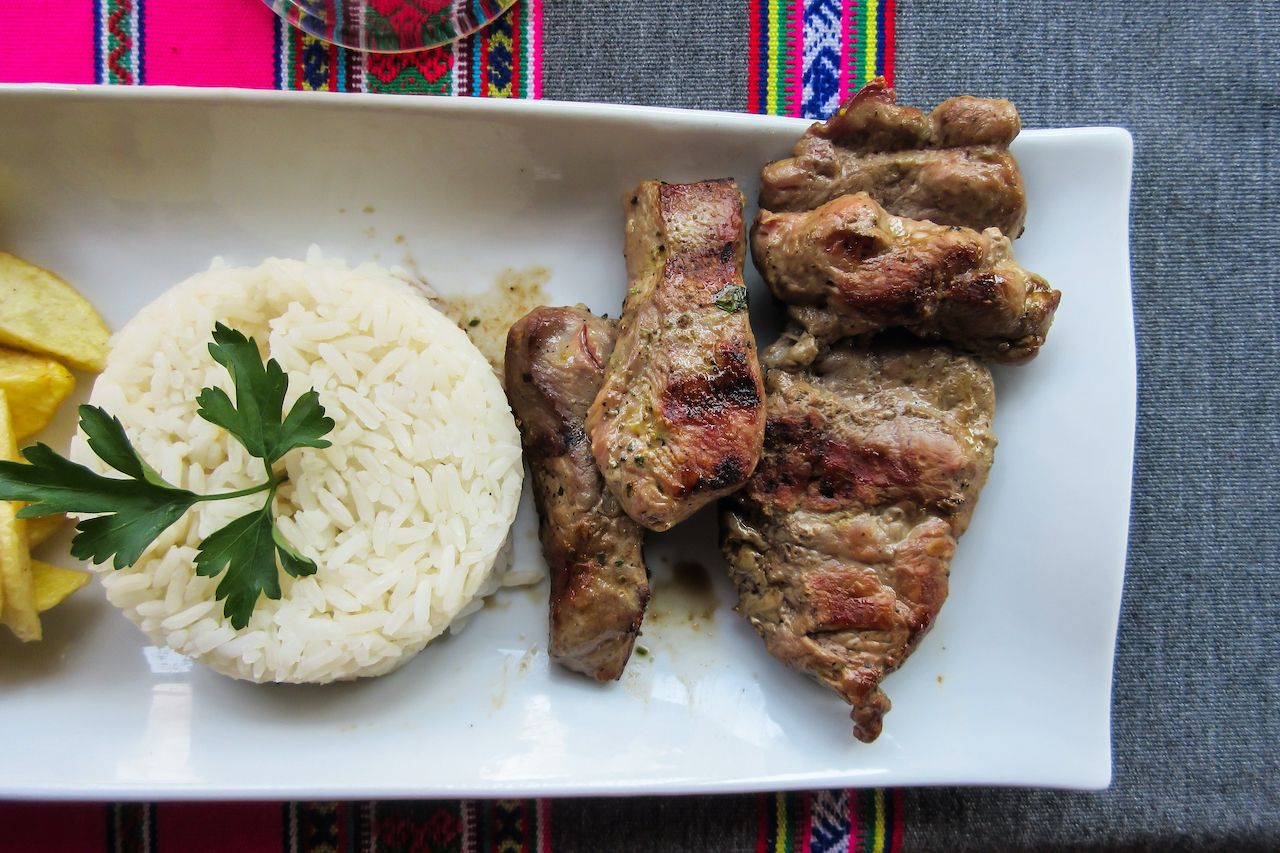 A domesticated camelid, alpacas have been bred in South America for centuries for their fleece. They’re also good for eating, and alpaca meat is considered a delicacy in the Andes Mountains region of Peru. Many restaurants in Cusco and the Andes serve alpaca meat that’s usually oven roasted. It’s a lean, flavorsome meat resembling venison. While roasting is the most common, other interpretations include alpaca carpaccio like the one at Cusco’s famous restaurant Cicciolina, which is known for its modern interpretations of traditional Andean cuisine.

When not prepared correctly, octopus can be tough and chewy. But Peruvians really know what they’re doing with this wriggly sea creature, and they keep it simple. Pulpo a la parilla translates to “octopus on the grill,” and that’s exactly what it is: Fresh octopus from the Pacific Ocean, straight on the grill. The result is tender and full of flavor. What more could you ask for? 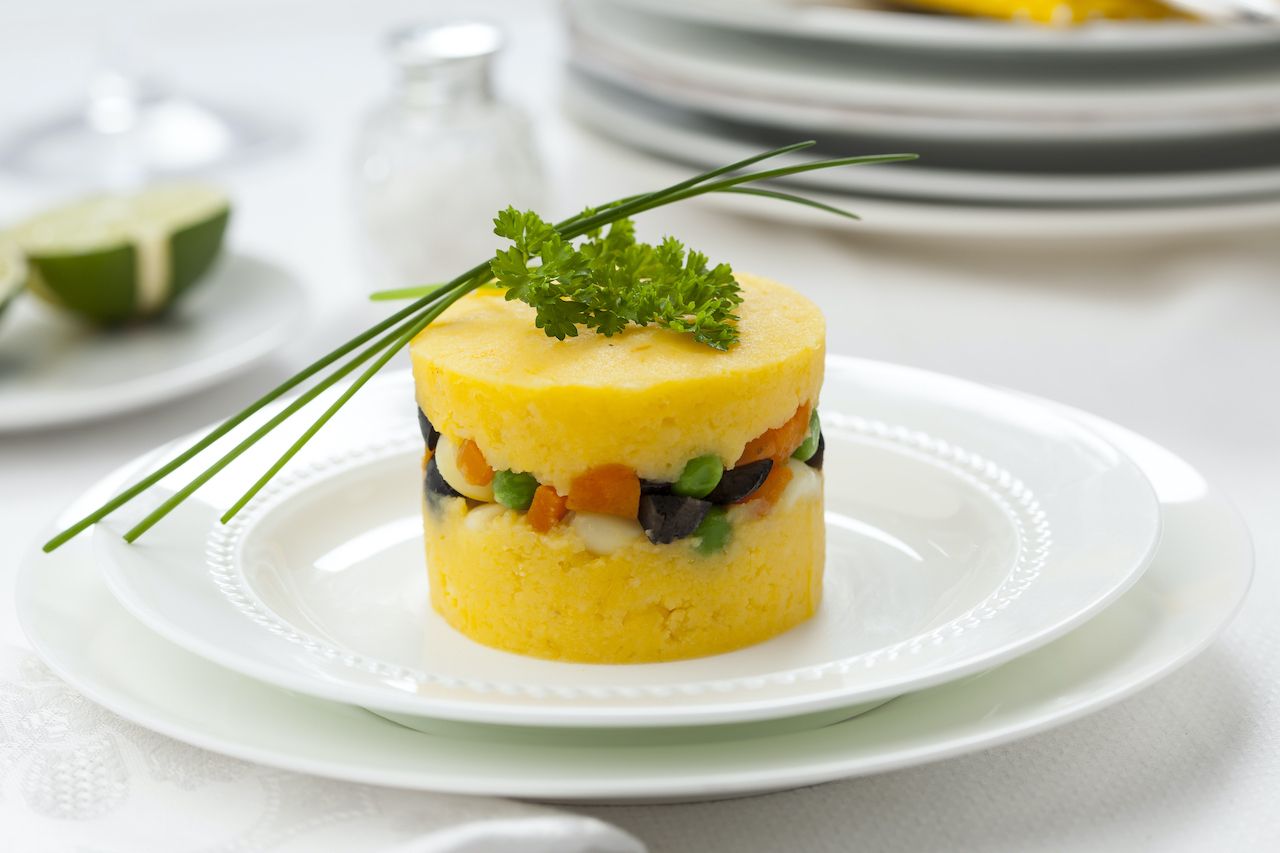 Causa rellena is the humble potato served cold. But don’t let that put you off. This interesting take on Peru’s most famous crop (there are more than 4,000 potato varieties in the Andean highlands) is like no potato dish you’ve tried before. The dish is made with smooth mashed yellow potato that’s flavored with lime and layered with avocado, mayonnaise, and chicken or seafood. The result is a surprisingly light and zesty dish, and it’s equally aesthetically pleasing with its delicate and colorful layers. It’s a family favorite that’s often shared as a cold starter before a hot meal.

Pacha means earth and manca means oven in the indigenous Quechuan languages. Dating back to the Inca Empire, this sacred and highly ritualized meal is prepared by layering meat, potatoes, vegetables, and Andean herbs on red hot rocks and then burying the whole thing underground. Think of it as something like an ancient pressure cooker. Once uncovered, the result is tender meat with crispy edges that’s infused with the aromas of the herbs. Today, you can find versions of pachamanca in the cities as well as the mountains. 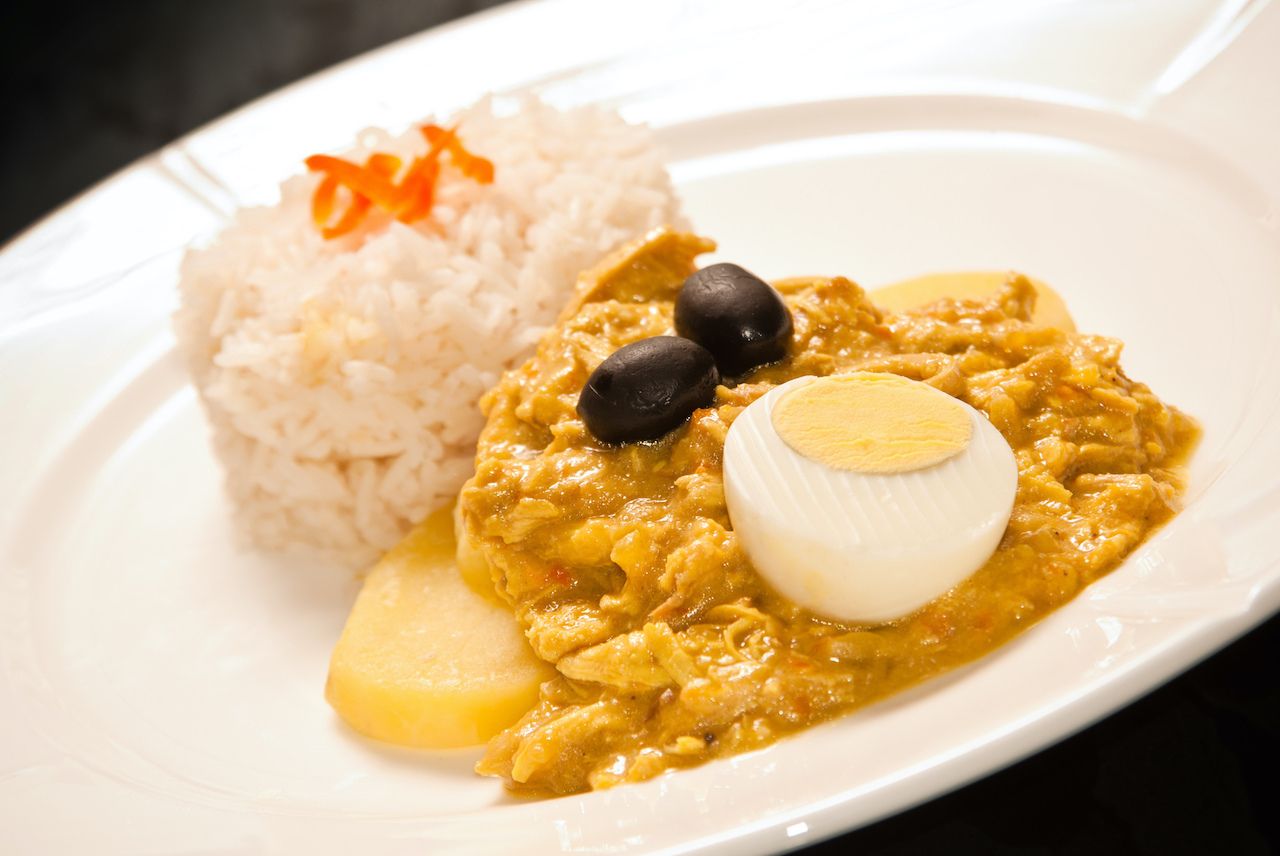 Another pillar of Peruvian cuisine, aji de gallina is a slow-cooked shredded chicken dish that’s served in a sauce made with walnuts, milk, cheese and the bold flavor of the aji amarillo chile pepper. The sauce is a vibrant yellow thanks to the chile (aji amarillo means “yellow chili”). The dish is topped with black olives and a boiled egg and is served (like many Peruvian dishes) with rice and potatoes.

Choclo is a type of corn from Cuzco that was first grown by the Incas and now thrives in Peru’s Sacred Valley. It looks like corn on steroids, with huge white kernels three times the size of your average grocery store corn. A popular preparation is choclo con queso, or choclo with cheese. This popular street food snack is simply hot boiled choclo served with a slap of fresh, salty Andean cheese. It’s a warming and filling snack that’s one of the simple pleasures of life in the Andes. 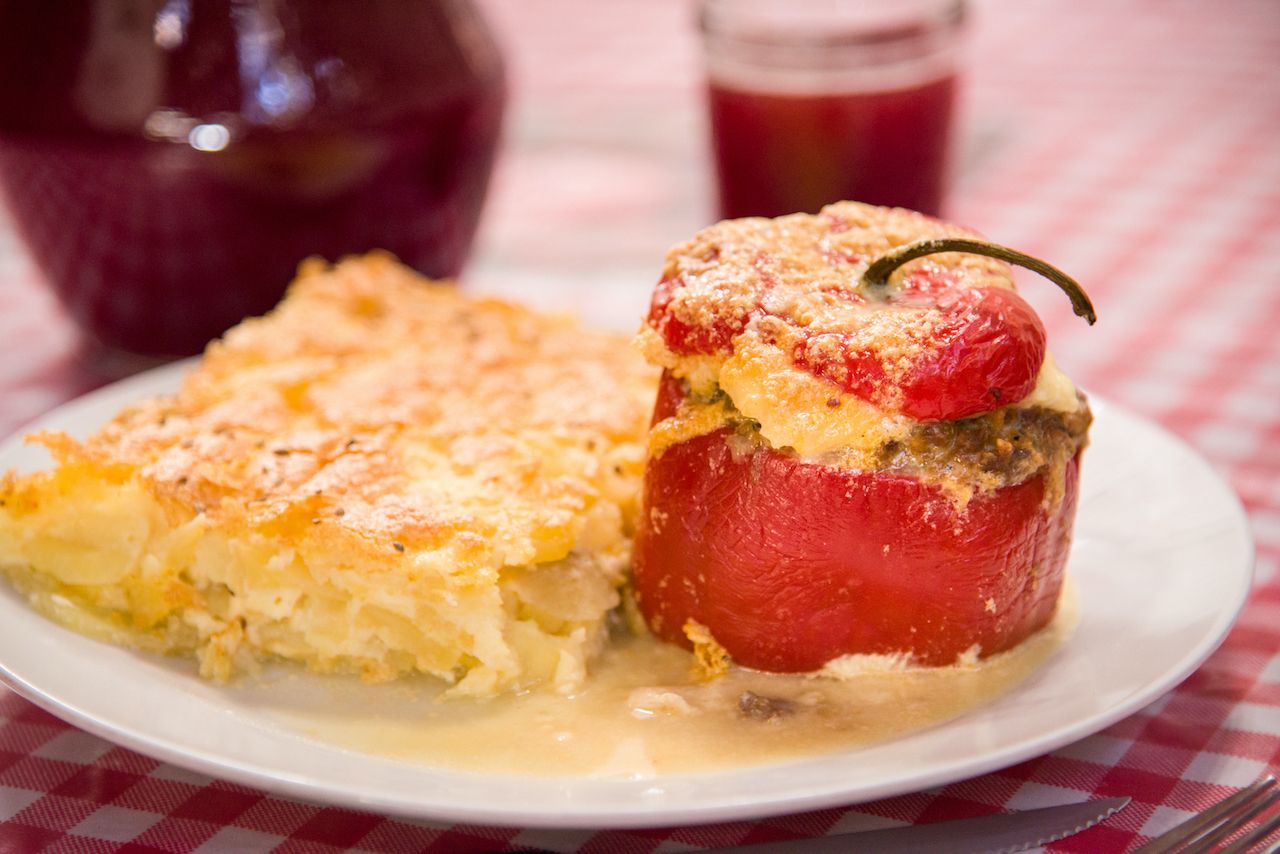 A regional speciality from Peru’s second-largest city, Arequipa, rocoto relleno is Peru’s version of the stuffed pepper. Rocoto looks like a red bell pepper, but beware as it comes with a spicy kick. The rocoto is stuffed with a mix of minced beef, pork, onions, and pecans, and then is topped with cheese and grilled to perfection. It’s often served with a side of pastel de papa, thin layers of potato and cheese. Overall it’s an immense tour de force for your taste buds, so bring a friend to help you out.

Peru has 1,500 miles of Pacific coastline, and incredible seafood is featured on menus across the country. Chupe de camarones is a hearty shrimp chowder that’s a showcase of the ocean’s finest catch and a great warming dish for a chilly evening. Made with shrimp, potatoes, tomatoes, and chiles, the flavors of the ocean are complemented with huacatay, an Andean herb that tastes like a cross between basil and mint. 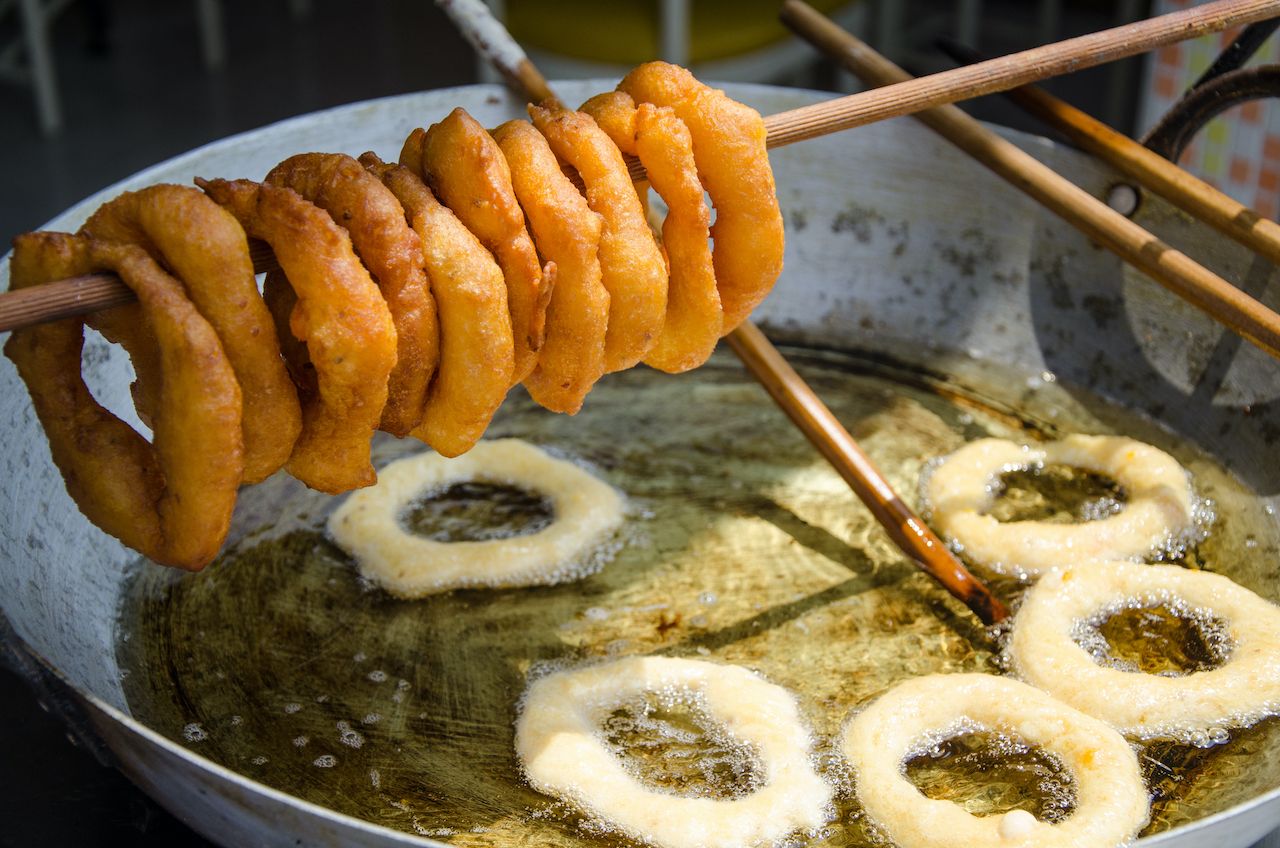 Picarones are to Peru what churros are to Spain. You could easily walk past and mistake them for onion rings, but don’t be fooled. These deep fried doughnut rings are made with flour, mashed sweet potato, and aniseed, and are then bathed in a sweet cinnamon and clove syrup. They’re a late-night favorite after a night of drinking. You’ll find picarones carts around Parque Kennedy in Lima’s trendy Miraflores district, just waiting for the bars to empty.

Tacu tacu is a comfort dish of rice, beans, and chilis that’s often made with leftovers from the day before. It’s all cooked in a pan to make a crispy outside and soft inside, and it’s typically served in restaurants with a sabana (thin slice) of steak and a fried egg on top.

A version of this article was previously published on Aug 10, 2017. It was updated by food and drink editor Nickolaus Hines on April 30, 2020.

Photo + Video + Film24 Reasons You Should Never Travel To Peru
Tagged
Food + Drink Peru
What did you think of this story?
Meh
Good
Awesome

How To Have Peru’s Most Popular Lake To Yourself

Jaw-Dropping Images From a Desolate Mountain Trek in Peru

Forget the Danube. You Need To Take a Luxury Riverboat Cruise on the Amazon.