St. Louis is the home of storied culinary novelties such as toasted ravioli and cracker-thin St. Louis-style pizza crusts, but more than any other food from the city (or the state of Missouri), gooey butter cake is arguably the most iconic. And in this town, seemingly everyone has opinions about it: where to find it, how to make it, and when to eat it.

“People are opinionated about gooey butter because it’s such an adaptable cake,” says Molly Killeen, a St. Louis native whose gooey butter cake recipe was featured in the New York Times. “The simplicity of the original ingredients opens the door to whatever variations people can dream up, and the combination of a sweet topping with a more bready crust makes the cake appropriate for anything: breakfast, teatime, birthdays, office parties.”

It’s believed that this thin, sticky dessert first appeared in the 1940s, though its inventor’s name is disputed. However, most agree that it’s likely product of a German baker who made an error and switched the proportions of butter and flour. The result? A no-frills cake no more than 1-inch thick with a sweet dough base topped with the gooey: a jiggly, buttery layer that verges on custard and is often dusted with confectioners sugar.

“Afternoon coffee or tea is a perfect time for it,” says Tim Brennan, a two-time James Beard Award winner and owner of Cravings Gourmet Desserts who enjoys the cake for breakfast, which is when his mother served it. “It’s not a sophisticated dessert. It’s rustic and simple.”

Two versions of gooey butter cake are the most common throughout St. Louis. There’s the yeast-risen, sweet dough original, and then there’s the one popularized by home cooks that typically is made with cream cheese and store-bought cake mix. Both are served warm or at room-temperature in brownie-like squares. When I first moved to Missouri, I was welcomed to my new home with a pan of the latter. It is an unapologetically rich dessert, tiptoeing toward the wincing sweetness of children’s candy. I devoured every sticky crumb.

Killeen’s recipe adheres to the traditional yeast base, while Brennan plays with a few different renditions of his own that have come about from his 35 years on the local gooey butter cake scene. “It’s a vehicle that I think translates into all sorts of applications,” Brennan says. “Plain vanilla? Not my choice, because it’s too sweet. Nostalgia can only carry you so far.”

Brennan raises a good argument, proven by the abundance in gooey butter cake flavor varieties in town. But perhaps nostalgia itself is ultimately what powers this dessert’s enduring legacy.

“If gooey butter cake was truly born of an error, as the tale is told, it seems to me that it lived on because there is a spaciousness to life in Missouri,” Killeen says. “There is no need to quickly toss things out and move on to the next. There is room. There is time. St. Louisans are proud of what they know is true, and this cake, made up of the most simple baking ingredients, is greater than the sum of its parts.”

With that in mind, perhaps there’s no singular best gooey butter cake. And in a place where this humble delicacy is everywhere from neighborhood groceries to chic coffee shops, knowing where to start is tough.

Here’s where to try the city’s most noteworthy takes on this dessert, then come to your own conclusions about which is your favorite.

Where to try the best gooey butter cake in St. Louis, Missouri 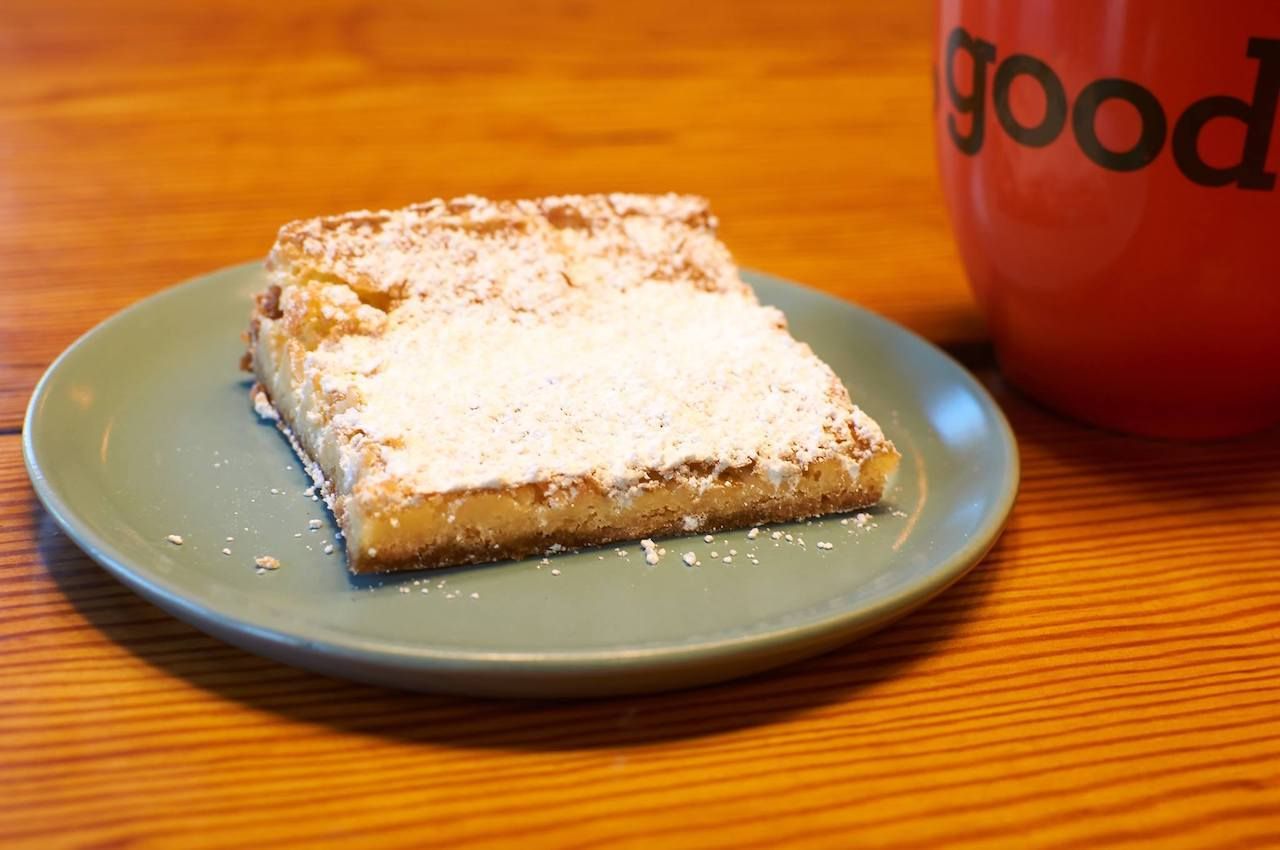 Park Avenue Coffee: This shop offers more than 70 varieties of gooey butter cakes, from summery peach or lemon varieties to more unexpected versions like bacon. But the top seller is the original “Mom’s Traditional,” which won a distinction from Food Network as the best in town. Choose from three locations, but the original in Lafayette Park is the most charming.

Federhofer’s Bakery: The Federhofer name is famous in St. Louis for its decades-long reputation as one of the best bakeries in the metropolitan area. Sticklers for tradition, the bakery avoids both cream cheese and powdered sugar in its take on gooey butter cake. This mom-and-pop bakery serves up gooey butter cake in five different flavors, slinging out more than 60 pans a week.

Russell’s on Macklind: This sweet neighborhood spot offers a bar cookie version composed of three layers: a thick, buttery shortbread base, a layer of creamy goo in the middle, and a crisp, merengue-like topping that shatters at first bite. The original and chocolate won’t disappoint, but the surprising tartness of its seasonal fruit varieties cuts through the sweetness for a more sophisticated bite.

Missouri Baking Company: Gooey butter cake likely originated with a German baker, but the family owned, Italian-American Gambaro spot has proved to be just as adept at creating delicious gooey butter cake for nearly a hundred years at the historic location in The Hill. Their version of gooey butter cake is an actual cake (as in, more dense and less pudding-like texture) made with sweet dough and almond paste. Flavors reflect the changing seasons — brown sugar pecan in the fall, triple berry in the spring and summer.

Food + DrinkThe Midwest Is Obsessed With Frozen Custard. Here’s Where To Try It.
Tagged
Dessert Food + Drink
What did you think of this story?
Meh
Good
Awesome