Nine miles south of downtown St. Louis, there’s an unassuming white building that blends seamlessly into the surrounding residential neighborhood. What stands out is the delicious smell of piping hot pizza sauce wafting out of its basement. Here, you’ll find St. Louis-style pizza at its finest — one of the most controversial pizza styles.

St. Louis-style pizza is also one of the oldest styles of American pizza. Monte Bello Pizzeria claims to be the oldest St. Louis-style pizza joint in the city. It’s served pies with cracker-thin crust and edge-to-edge toppings out of its WWII-era oven since 1950. The restaurant’s walls are covered in murals that were painted by a customer who was paid in beer, according to co-owner Tonya Buechel, and the tables are draped with the same style of red and white checkered tablecloths that were there on opening day.

Diners are steeped in tradition at Monte Bello: order a pizza covered in Italian sausage, along with sides of gouda bacon arancini and ravioli that are still made on the same ravioli board that was fashioned for the restaurant in the ‘60s.

The pizza tradition in this city may not be as famed as New York’s or Chicago’s, but under-the-radar spots like Monte Bello make it worth your while to hunt down the best slices in St. Louis.

What is St. Louis-style pizza? 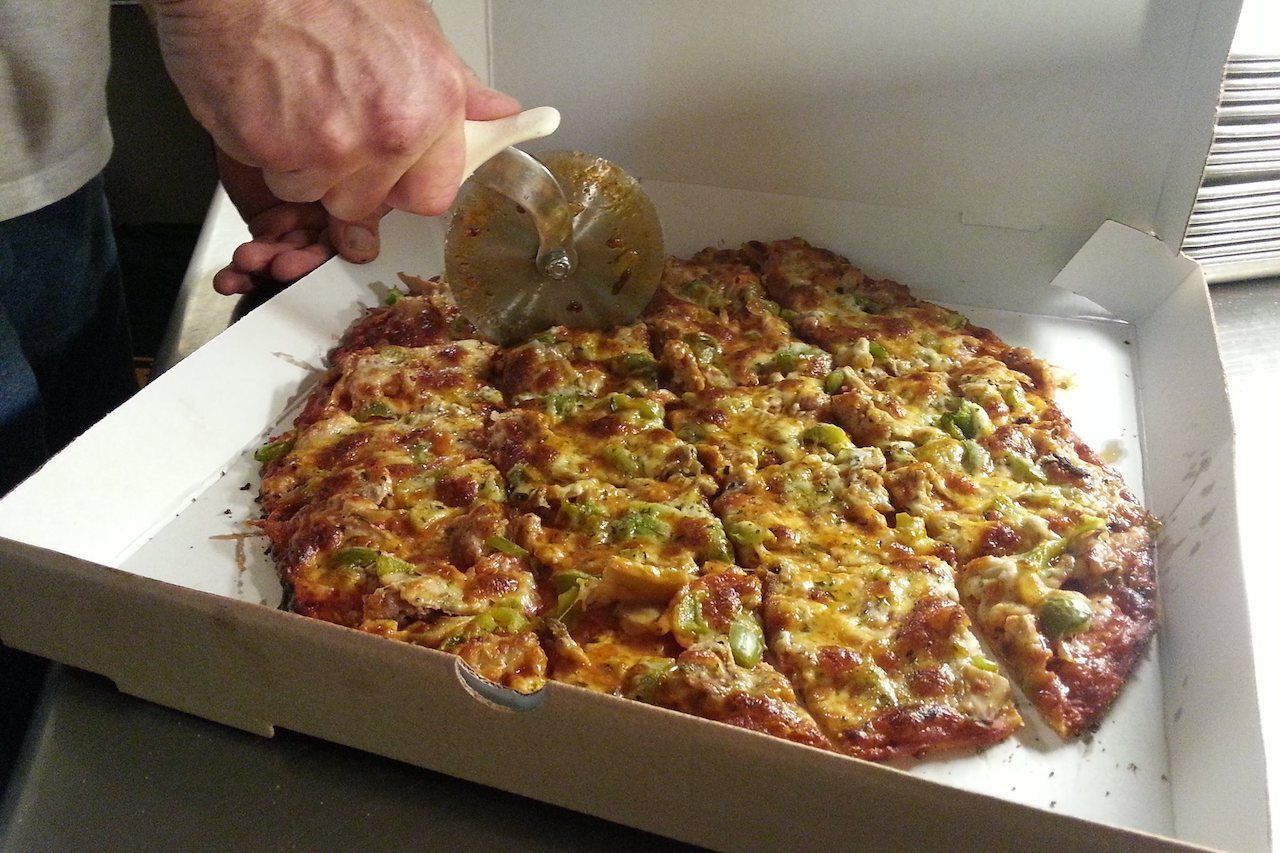 “It’s a rite of passage,” says St. Louis-native Ken Earley, who suggests the best way to introduce the city’s pizza to outsiders is to order out, dig in, and wait for the reactions.

A true St. Louis-style pizza has cruncy, extra-thin crust and is loaded to the literal brim with toppings. Some people make the argument that a St. Louis pizza is more like nachos than a pie. But perhaps the most controversial component is the traditional “cheese product” called Provel.

“It’s just a smoky, gooey mix of cheddar, Swiss, and provolone,” Earley says. “But when hot, it’s a lava-like texture of deliciousness.”

That smoky cheese is known for sticking to your teeth and it doesn’t hit home with everyone, so some pizza shops opt out.

“We use a four cheese blend that we shred ourselves, and add secret spices to give our cheese a wonderful flavor,” Buechel says.

Some pizzerias are more loyal to the original cheese tradition, though: Dogtown Pizza, local makers of frozen St. Louis-style pizza, cuts its Provel cheese with mozzarella to please the cheese naysayers.

“I grew up in St. Louis with Provel cheese on pizza, so I didn’t know anything different!” says Meredith Schaper, co-owner of Dogtown Pizza. “There are a lot of anti-Provel people out there who say it’s not real cheese. It is real cheese! It’s three real cheeses melted into one!”

Schaper and her husband, Rick, brought traditional St. Louis-style pizzas to the freezer aisle for the first time in October 2006. Almost 15 years later, Dogtown is run by the Schapers and their three sons. Thanks to them, you can keep the local pizza tradition on hand in your home for extra-busy nights. 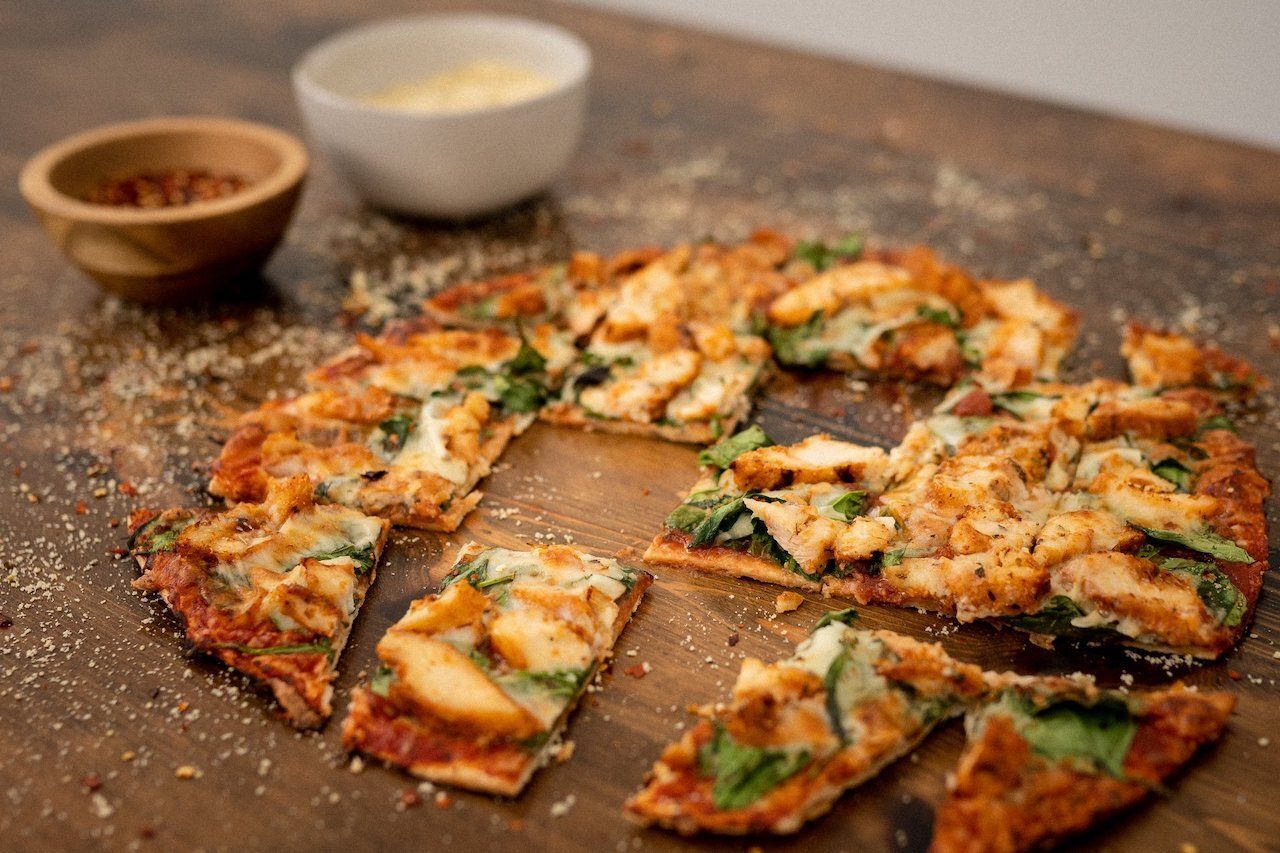 Most readily-available historical accounts credit Chicago-born Amedeo Fiore with creating this St. Louis pizza tradition. A tenor singer turned restaurateur, Fiore owned and operated an Italian restaurant in 1945 called Melrose Cafe across the street from the Chase Hotel. The story goes that hotel guests struggled to find good pizza nearby, so Fiore stepped in and added pizza to his menu.

Fiore’s original pizzas were famously loaded down with toppings that spilled over the edge of the pie due to the lack of a traditional crust. They were cut into square-pieces and intended for sharing. Before long, Fiore gained notoriety and copycats. Today, pizzerias throughout St. Louis carry on his tradition.

Where to try the best St. Louis-style pizza 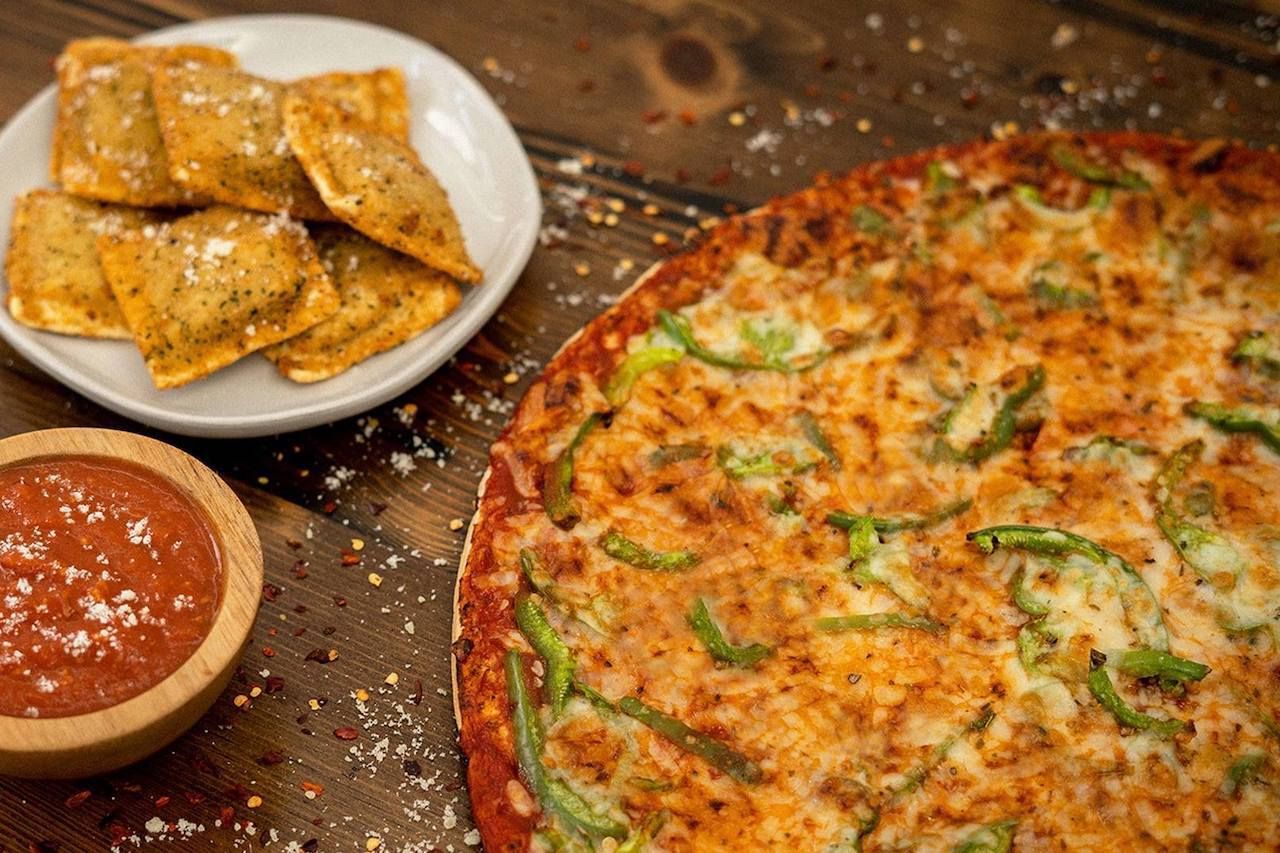 Regardless of your stance on gobs of smoky cheese products, there are still hundreds of ways to enjoy pizza next time you visit the Gateway to the West.

“Locally, Imo’s is the name synonymous with pizza,” according to Earley. “There’s a location in every neighborhood so you can have your St. Louis-style pizza delivered along with an Imo’s salad or garlic bread, both of which are also topped with Provel.”

Earley adds that “the quintessential way to eat St. Louis pizza is probably the Imo’s Deluxe: sausage, mushrooms, onions, green pepper, bacon, and, of course, Provel. To make it complete, you’d need to wash it down with Bud Select, or Urban Chestnut’s Urban Underdog for the local craft beer crowd.”

Here are the four best restaurants where newcomers to the city can try St. Louis-style pizza, as well as a make-at-home option.

Monte Bello Pizzeria, for atmosphere and everything made in-house: This is as original as it gets with recipes from the 1950s, a menu chock-full of extra sides and appetizers, and a warm atmosphere that’s tough to rival. This is the kind of place where regulars bring their grandchildren and talk about how they had their first date here decades ago. Tonya Buechel, the restaurant’s co-owner, says you can’t go wrong with anything on the menu, but if you want a recommendation, start with the “Johnny B Good” pizza.

Imo’s Pizza, for convenience and reliability: If anyone is acquainted with St. Louis-style pizza outside of the city, it’s probably because of Imo’s. A local chain with a loyal fanbase, Imo’s pizza is a tried-and-true favorite. Choose from a long list of toppings or pick a specialty pizza. Earley says if you want to extend your pizza experience, order one with pepperoni and bacon and refrigerate leftover slices in the cardboard box overnight for the perfect cold-pizza breakfast.

Where: More than 100 locations in Missouri, Illinois, and Kansas

Farotto’s Pasta and Pizzeria, for dining out with friends: Fresh ingredients, creative specialty pizzas, and an ideal gathering place make Farotto’s the perfect spot for people who want to relax on the outside deck while they take in the tastes of St. Louis. What started as a small restaurant in 1956 is now an expansive restaurant with a full bar, a large Italian menu, and an excellent dining experience you can count on.

Pirrone’s Pizzeria, for specials and ordering carry-out: A no-frills pizza joint that offers some of the best-value pizza in town. Pirrone’s uses the same quality ingredients as its toughest competitors, but it’s constantly running nightly specials that are perfect for grab and go. Be sure to try the homemade Italian sausage, and if you’re near the St. Peters location, ask about happy hour.

Dogtown Pizza, for last minute weeknight meals you can toss in the oven: Dogtown brings everything you love about St. Louis-style pizza to your freezer. Keep a few pies on hand to impress last-minute guests or for feeding the whole family on busy nights.

Where: Local markets and grocery stores including select Dierbergs, Schnucks, Target, and Walmart.

What is St. Louis style crust?

St. Louis style crust is thin and crispy — nothing like the doughy, dense crusts you’ll see on pizzas on the East Coast. This type of pizza crust is made without yeast, which gives it its signature texture. After the crust is done baking, it’s sprinkled with a layer of provel cheese (a type of processed cheese especially popular in St. Louis), which should remain gooey by the time you take a bite.

How To Support Local on Your Kansas City Trip

8 Unforgettable Places To Stay on Your Trip To Missouri