McDonald’s announced yesterday that it will start selling a “McPlant” burger. As odd as it may sound, that is a good thing. After all, eating less meat is critical to saving our planet — and, until now, an order of fries has been the only way to have a hot, non-dessert item at Micky D’s that doesn’t feature meat.

In his documentary, A Life On Our Planet, Sir David Attenborough discusses the five critical steps to heal our planet and to save it — and us — from a very bleak future. One of those steps is moving away from meat, which is not just an inefficient way to turn the sun’s energy into calories but also a damaging one. Humans are destroying pristine forests around the globe to make way for cattle ranching and for the harvesting of grain to feed that cattle. Seventy percent of the planet’s agricultural space goes to meat production.

Relying more on plants to meet our nutritional needs would go a long way to saving the Amazon. It would directly reduce heat-trapping emissions, too, since animal farming produces up to 18 percent of them. The good news is that reducing our meat consumption is the step over which we have the most control. Or do we?

The fact is that most food providers and consumers are not doing enough to normalize eating less meat. Everywhere you look you find gratuitous meat, meat that really doesn’t add all that much to a recipe but that’s tossed in anyway — as when fancy salad menus all feature bacon or smoked trout, or your mile-high apres-ski nachos come sprinkled with ground beef. That’s unnecessary meat that adds little to the flavor but keeps us in a meat-eating mindset.

Take Trader Joe’s, a progressive kind of supermarket that started in Southern California and grew up in liberal-leaning cities, where the percentage of people who opt for vegetarian diets is five times greater than in conservative ones. Even at TJ’s, meat shows up in places it doesn’t need to be. Most of the top-rated salads here come “with chicken” — usually written underneath the name of the salad in a swirly font as if it’s a special, healthy bonus. It is not. 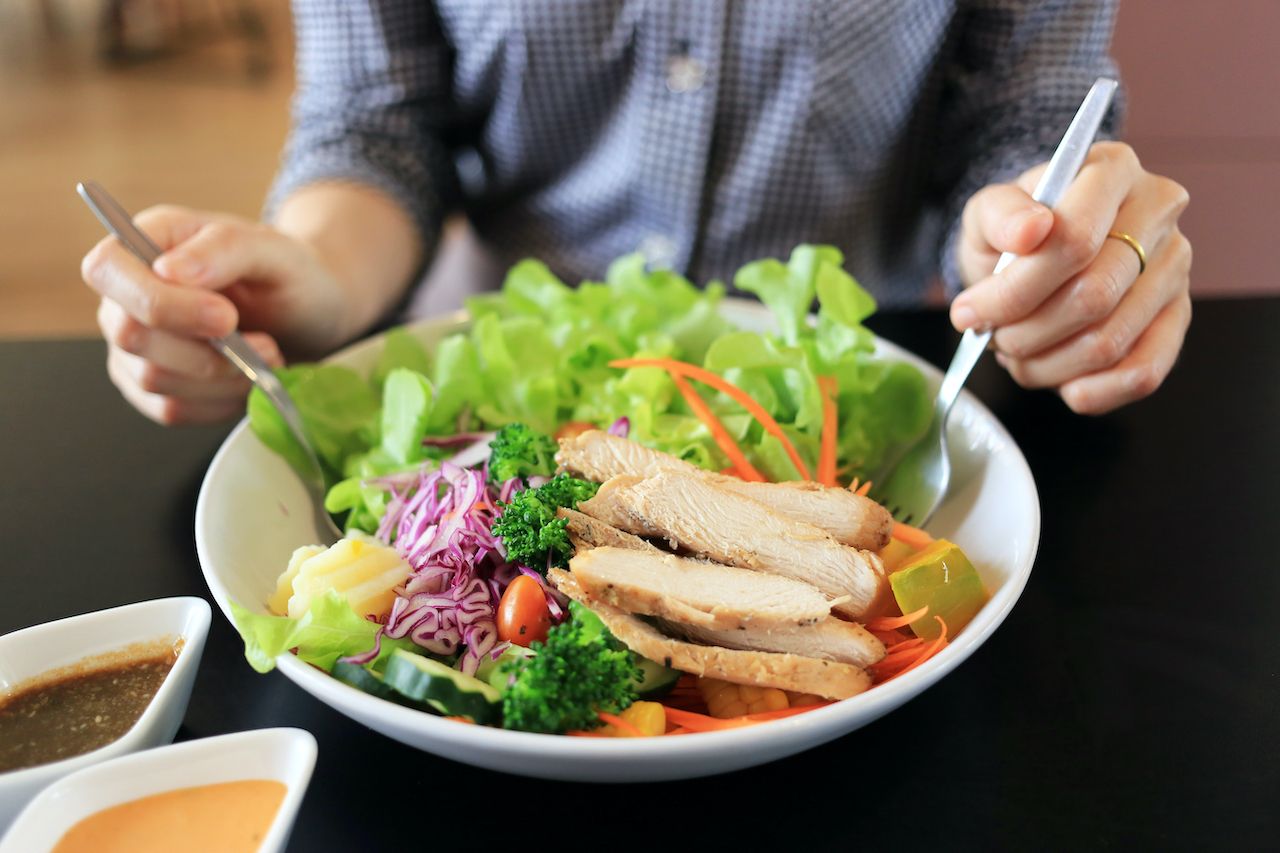 A generation ago, when people worried more about fat than sugar, white chicken meat became the lean alternative to beef. By now we should know better. There is in fact nothing particularly healthy nor Earth-friendly about factory-farmed chicken. As Attenborough points out in A Life On Our Planet, 70 percent of the mass of birds on this planet are domesticated birds, mostly chickens, existing simply to feed us.

And the production of chickens continues to accelerate to sustain our insatiable appetite for them. While chickens used to have 15- to 20-year lifespans, so-called broiler chickens, the ones produced for eating, live for six weeks, as Jonathan Safran Foer tells us in Eating Animals. To compensate for being killed at their adolescence, chickens have been engineered to grow 400 percent faster than before and to have weirdly enlarged breasts so we can get all that pale meat. And chickens live in such crowded, unsanitary conditions that nearly half carry E. coli, which has caused urinary tract infections in some of the people who eat those poor birds.

But let’s get off the what’s-wrong-with-meat track and get back to the topic of why we eat it so unnecessarily. One excuse is that it’s what we are used to. Those of us raised with some version of a culinary tradition handed over from Europe might have grown up with the idea that a plate needs a piece of meat, a starch, and a veggie. Considering how readily Americans adopt new foods — making everything from hummus to boba tea to mochi ice cream pretty much ubiquitous within a few years — this is a lazy argument.

“You should be able to go out to eat with friends at a hot new restaurant and not have to scan to the very bottom of the menu for the stuffed squash afterthought.”

Not only that, it’s lazy because it’s not even all that accurate. When the caesar salad was invented nearly a hundred years ago, sure it had some anchovies, but it didn’t have slabs of chicken. The chicken part is new. It’s lazy to think that when you order Pad Thai or green curry from your local Thai place, it has to have cubes of frankly not very flavorful white chicken.

It’s just not very creative to dump chicken cubes into a salad to make it “heartier,” to use chicken stock in soups when vegetable broth will do, or to cook ground beef into our chili. It’s a lack of imagination; the same lack of imagination that has kept Detroit making fossil-fuel burning cars for much longer than necessary. Why does chili even need beef, considering that just one cup of black beans or kidney beans meets 30 percent of your daily protein needs?

I’m not saying everyone should be vegan. Meat can be a wonderful thing, now and then. Anthony Bourdain urged us to travel with an open mind. For him, foods were a way to connect with others, even if it meant savoring “a humble taqueria’s mystery meat.” It’s a joy and a privilege to be able to eat new and different foods.

But that’s just the point. We should be open to new and different foods and be able to identify the appropriate times to eat them. The time has come to move away from the concept that a meal isn’t a meal if it isn’t built around a piece of meat, or at least doesn’t include meat. Mushroom risotto, a falafel wrap, a big bowl of ramen with tofu. Getting hungry yet?

Why is it, then, that so often you need to go to a specifically vegetarian restaurant to find more than one thing on the menu to enjoy? PETA ranked the most vegan-friendly cities in the country, and unsurprisingly, San Francisco nabbed the top spot. And while it was refreshing to see cities like Dallas and Nashville on the list, the ranking emphasized vegan restaurants over vegan offerings at your everyday restaurant.

The reality is that moving away from meat is going to be a personal choice for each of us, and it would be made easier if there were more than one non-meat item on the menu. We should get to the point where you can go into a lunch place near your work and not order the same grilled veggie sandwich yet again because that’s all there is. You should be able to go out to eat with friends at a hot new restaurant and not have to scan to the very bottom of the menu for the stuffed squash afterthought. 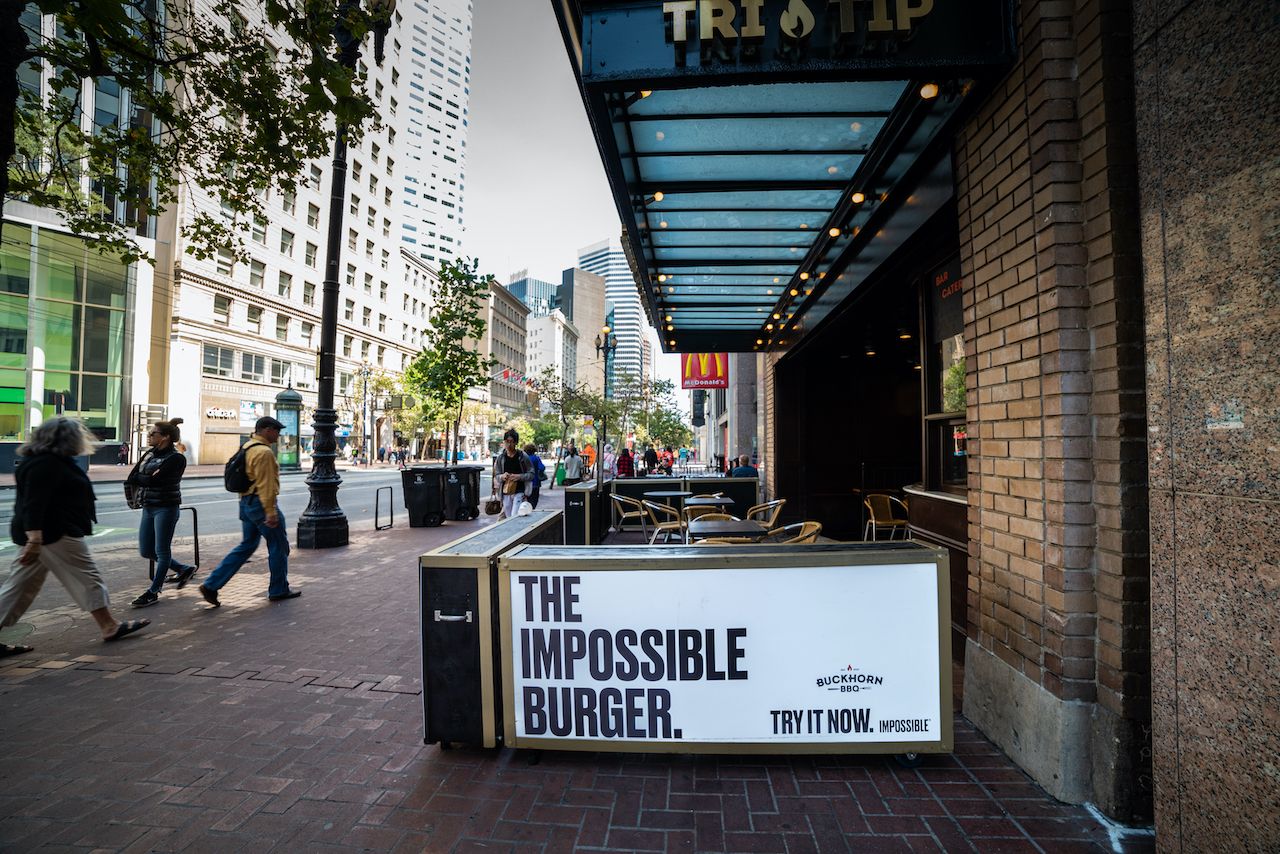 It just isn’t that hard to make amazing vegetarian food. We can get inspiration from other culinary traditions that don’t place such an emphasis on flesh. In India, where a quarter of the population is vegetarian, meat-free cuisine abounds. In Lebanon and Syria, you’ll find plenty of meat-heavy foods, but you’ll also savor eggplant dishes so rich and satisfying you’ll forget they don’t include meat.

Sure, there are some places where the traditional cuisine has been so centered around pork or beef that the easiest way not to eat it may just be to have a meat substitute. Many Germans were brought up with bratwurst and other sausages, yet — for environmental, animal welfare, and health reasons — over 40 percent of them now intentionally eat less meat. When the proportion of a population reducing its meat consumption exceeds a certain threshold, markets and restaurants will meet the demand. So while not all Germans are going to start eating grilled tempeh, you’ll hardly find a food court in the country without a veggie burger of some sort.

That said, other countries have a ways to go. Given its young expat community, Barcelona has some great vegan restaurants, but if you want to have more traditional Catalan food, good luck. In fact, all over Spain, where less than two percent of the population is vegetarian, a classic mixed salad comes with tuna on top. Yes, tuna.

Today there is one-tenth of the tuna in the sea than there was 50 years ago, and a lot of marine animals die along with the tuna catch. That’s not just because the decimated tuna population throws marine ecosystems out of whack but also because 145 different species are regularly caught in tuna nets and then left to die. So the tuna spooned onto a Spanish salad represents a table-full of dead sea creatures.

Living in Spain for two years, I started to feel despondent about all the darn tuna being served on salads, about the aisles and aisles of canned anchovies, sardines, oysters, octopus, and mussels at the grocery store. But the point is to start somewhere. I asked for my salads without tuna.

And back in the US, it’s time to start demanding that your food not contain meat you don’t need to be eating. If an item doesn’t sell well at Trader Joe’s, it stops stocking it. It’s that simple, and it’s a secret to the store’s success. So it’s on us. No more buying that PACIFIC SALAD with chicken or the Broccoli Slaw & Kale Salad with White Chicken Meat. It’s not good for you. It’s not good for the planet. It’s not necessary.