To become a master sommelier, wine professionals must take what’s been called the world’s toughest test. It’s the last in a series of four sommelier certifications administered by the Court of Master Sommeliers, an international organization established in 1977 to create a global standard for wine service in the hospitality industry. To be eligible for a master diploma, candidates must first pass the introductory, certified, and advanced sommelier exams. Few pass the final test. Fewer pass on their first try. To date, only around 270 people have earned the right to call themselves a Master Sommelier.

In recent years, various industries have co-opted the term sommelier. There are oysters somms, soft drink somms, and even a couple of hot sauce connoisseurs in Brooklyn who call themselves sommeliers. This has been controversial. Historically, the title has been reserved for wine experts alone, and some argue that the rigorous training and industry experience required to become a sommelier is unique to the wine industry, as the title should be. 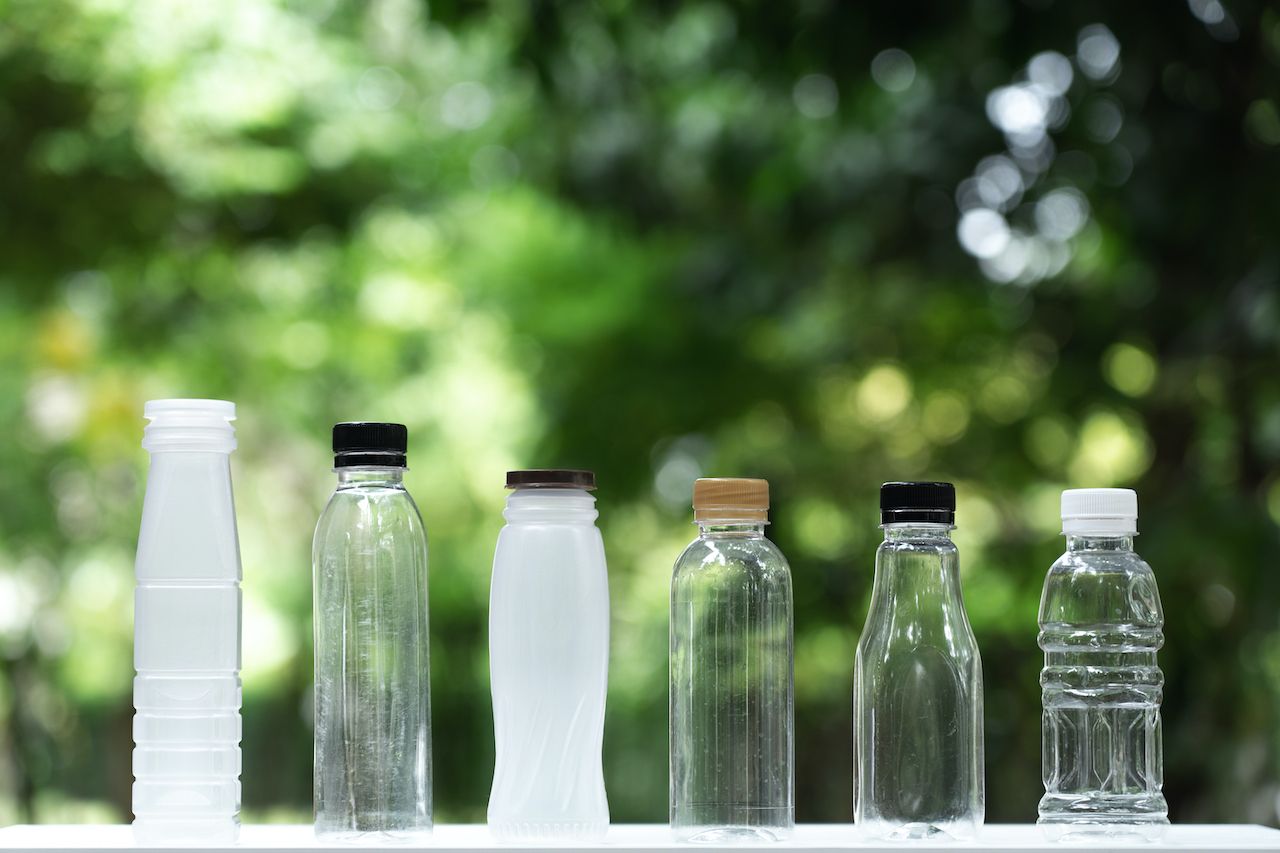 In the mid-2010s, Martin Riese was the water sommelier. The Germany-born, LA-based mineral water expert rose to fame as the United States’ first certified water sommelier, a title he now shares with experts like Chicago native Jessica Altieri, who has made headlines as a dual sommelier in wine and water. Both Riese and Altieri were schooled in Germany: Riese got his Mineral Water Sommelier certification from the Mineral Water Trade Association in 2010, while Altieri attended the prestigious Doemens Academy in Graefelfing outside of Munich.

Like Altieri, Kuok and Iyer are Doemens grads. Training programs outside of Germany include the Associazione Degustatori Acque Minerali in Milan, Italy, and the Korea International Sommelier Association in Seoul, South Korea. Zhu also founded the Purelogica Academy in China in 2016, and Riese runs a certification program online called the Fine Water Academy.

Once certified, a water sommelier might find work at a luxury hotel. Riese is one, and the director of food and beverage, at the Petit Ermitage hotel in Los Angeles, where he recently schooled actors Zac Efron and Anna Kendrick on pH balances, flavor profiles, and the truth behind purified water in an episode of Netflix’s Down to Earth with Zac Efron.

According to Harry Lalousis, the brand’s London-based expert, his role as mustard sommelier is not just the work of Maille’s marketing team: It’s the revival of a tradition dating to the company’s early days in the 18th century. From the opening of the flagship store until 1873 when records of the job dried up, Maille hired experts to answer questions about its products and help shoppers with food and mustard pairings, much as they’re doing today. 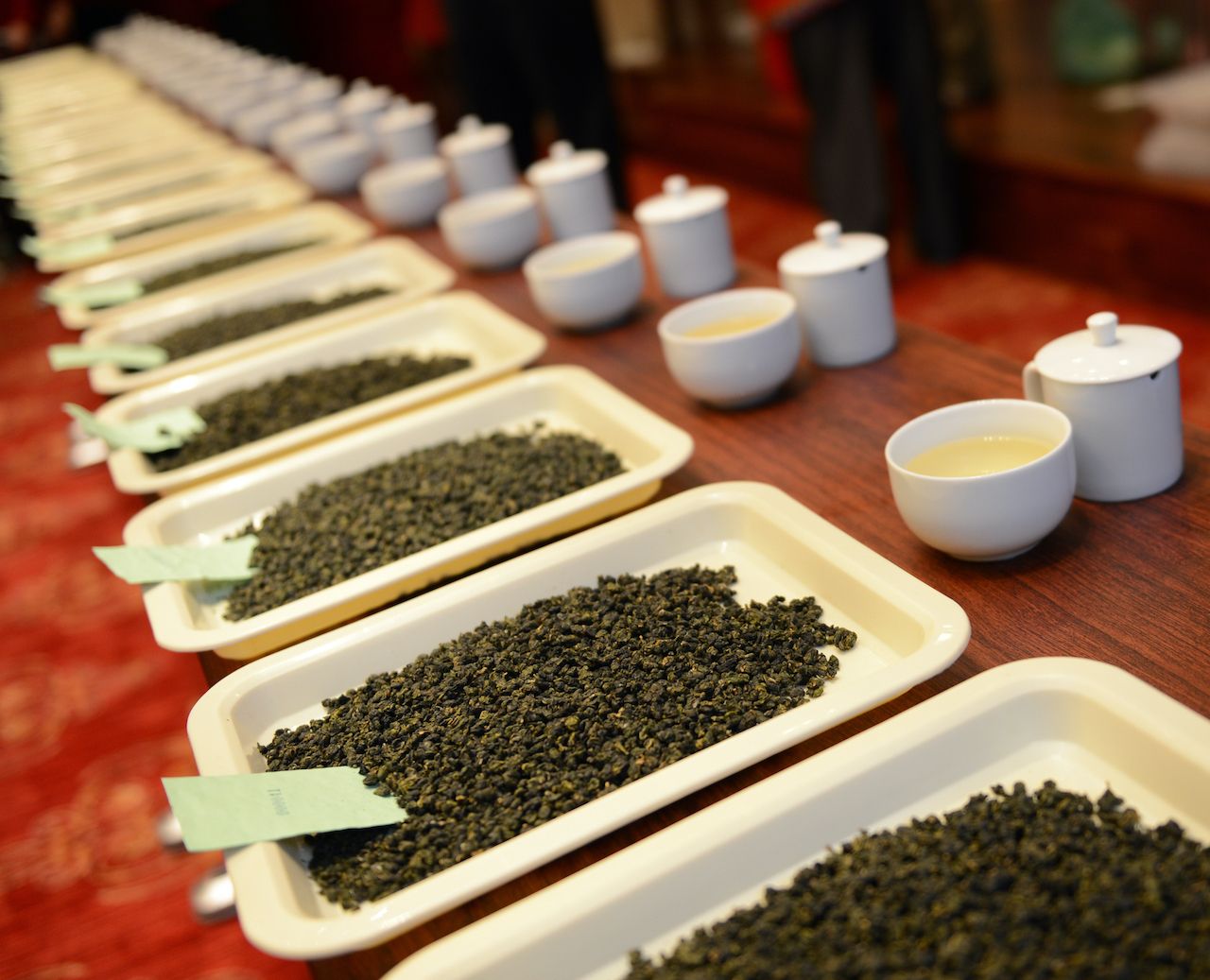 A quick Google search for the phrase tea sommelier yields pages of results for online courses and certification programs from China to Canada. Unlike the strict standards for wine sommeliers, these programs are vague and variable, not to mention costly. Yet the role of the tea expert is clearly defined throughout history, beginning in ancient China.

Legend has it that Emperor Shen Nung, a savvy herbalist, discovered tea by accident back in 2737 BCE. Tea-drinking flourished during the Tang Dynasty (618-906 CE) and spread to Japan, where ritual tea ceremonies were adopted by Zen Buddhist monks. A 16th-century man named Sen no Rikyū is credited with perfecting the art of chanoyu, or the Japanese tea ceremony. And according to one 17th-generation tea master, as of 2018, at least 200 Japanese schools are training new tea masters every year.

Highly skilled tea professionals are more in demand than ever, even outside of traditional tea houses. Luxury hotels and Michelin-starred restaurants now have tea experts on staff. These jobs are particularly competitive in Japan and Hong Kong, though properties from New York City to Cape Town to London now run tea programs, tastings, high tea, and more.

Some beer professionals call themselves sommeliers, but certified experts go by their own title: cicerone. Chicago brewer and beer-lover Ray Daniels started the Cicerone Certification Program in 2007, around the time the US’ craft beer industry was really picking up steam.

Daniels was inspired to create a training program for industry workers after observing a frustrating lack of expertise in the beer world beyond brewers themselves. Interested professionals can choose between four levels of accreditation: Certified Beer Server, Certified Cicerone, Advanced Cicerone, and Master Cicerone. The two-day Master Cicerone final is administered once a year in Chicago and comprises written, oral, and tasting exams.

Once certified, beer-masters are considered experts in five main areas: beer storage and serving etiquette, different beer styles, flavor and evaluation, ingredients and brewing, and food pairings. To even be considered, aspiring Master Cicerones should already be well versed in all things sudsy, from troubleshooting draft systems to knowledge of the brewing process. 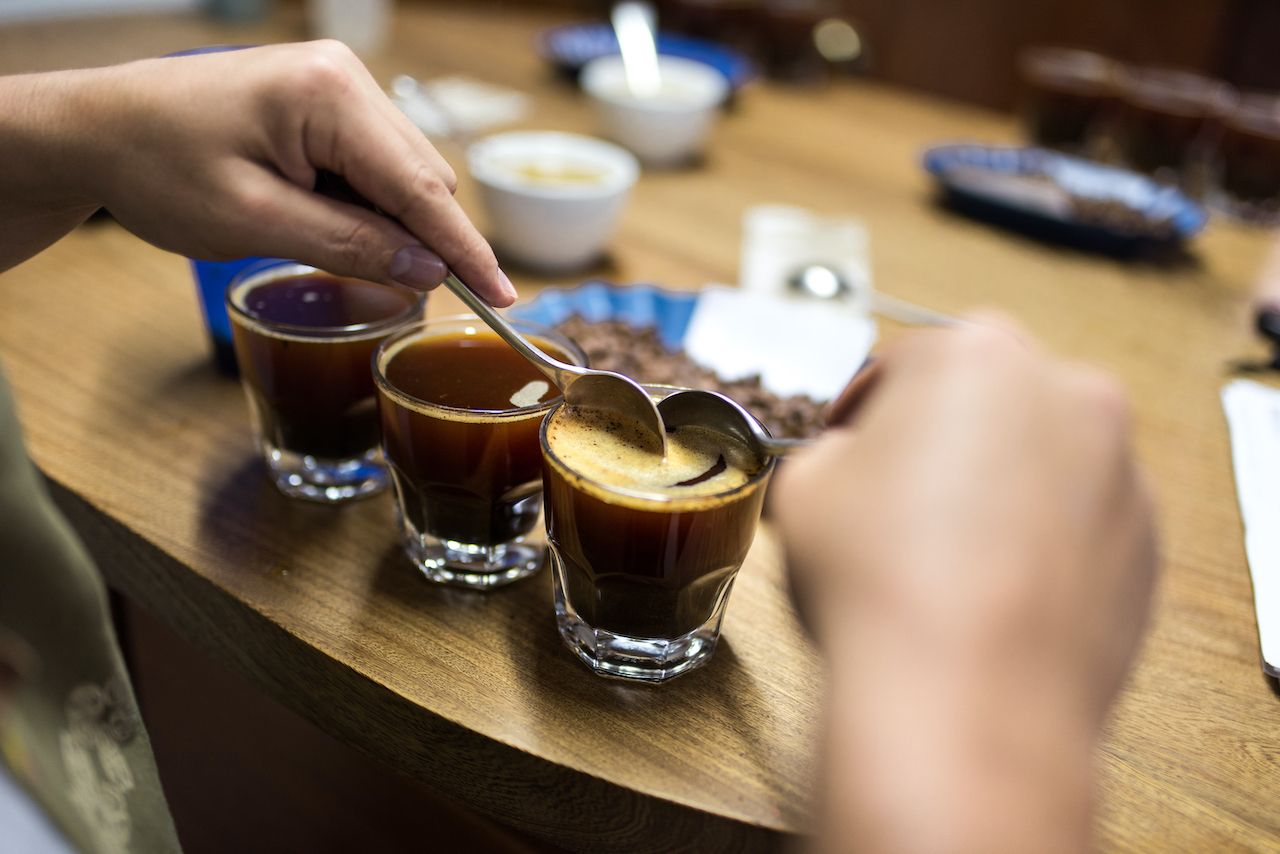 The closest equivalent to a sommelier in the coffee industry is a Q Grader. Q Graders are certified as expert tasters, or cuppers, by the Coffee Quality Institute (CQI). The CQI offers two Q-level certifications: Arabica and Robusta. Q Arabica Graders are credentialed in arabica coffee in accordance with the quality standards set by the Specialty Coffee Association of America (SCAA). Q Robusta Graders are taught Uganda Coffee Development Authority (UCDA) standards. Both must pass 22 tests. Subjects include brewing, identifying roasts, and grading green coffee.

The term sommelier is becoming more popular in the coffee world. Erik Liedholm made headlines in 2015 after becoming Seattle’s first certified coffee sommelier, thanks to Nespresso. In 2009, the brand launched its Nespresso Coffee Sommelier Program, which offers a select number of professional wine sommeliers the chance to study coffee under industry leaders at the Nespresso headquarters and factory in Switzerland each year.

Chapter 13 of honey expert Carla Marina Marchese’s first book is titled “Honey Sommelier: The Tasting of Honey.” According to Marchesa’s website, that’s where the term was coined.

Honey sommelier may not be an official title, but in Marchese’s case, it was earned. In addition to founding Red Bee honey and getting published on the subject numerous times, the beekeeper studied honey in Italy, where there’s a national register of tasting experts. After becoming one of some 250 students to pass all three training levels, Marchese became the first US citizen on the Italian National Register of Experts in the Sensory Analysis of Honey.

In 2013, Marchese brought this Italian schooling to an American audience, founding the American Honey Tasting Society, which offers both tasting courses and sensory training. The former overviews the practice of sensory analysis while the latter elevates it to an academic study, teaching students to identify honey by its floral source, understand its physical structure, prevent common defects, and learn to pair honey with wine, cheese, and other foods. Courses are taught by beekeepers who, like Marchese, all belong to Italy’s national register of experts. 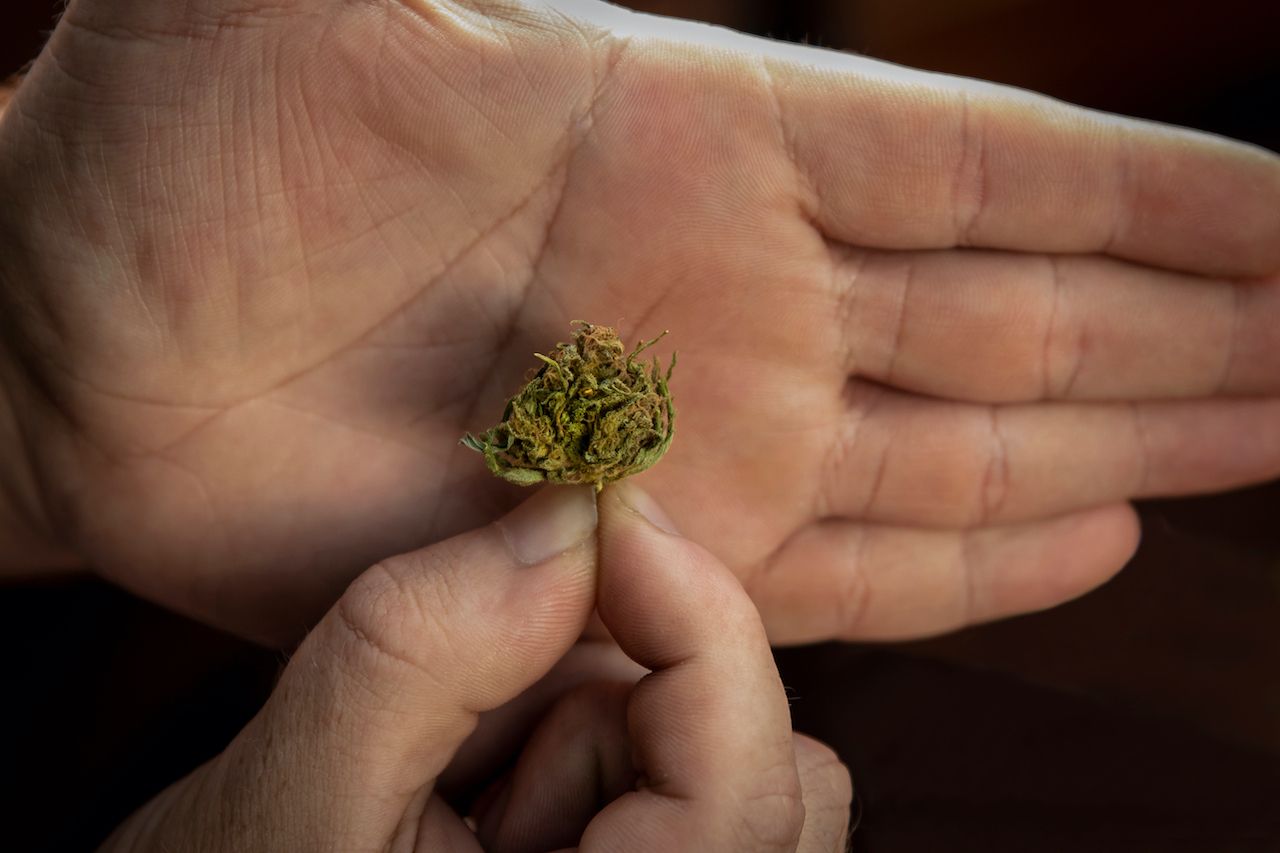 As the legal cannabis industry grows, more cannabis experts have taken to calling themselves sommeliers. Some argue that the complexities of cannabis are as, if not more, extensive than those of wine, making the title of cannabis sommelier uniquely comparable.

While any budtender, grower, or industry player can be a self-proclaimed sommelier, cannabis expertise requires education, and a lot of it. Students of cannabis study many of the same concepts as students of wine, from tasting notes to terroir to growing the respective plants. The Trichome Institute in Denver, Colorado, launched the first and most-respected cannabis certification program in the US. In Canada, where recreational cannabis has been federally legal since 2018, so-called cannasseurs can enroll in the first Canadian sommelier certification program through Cannareps.

CannabisCannabis regions should get the same recognition as wine regions. Here’s why.
Tagged
Food + Drink
What did you think of this story?
Meh
Good
Awesome