Most people who visit North Lake Tahoe in winter are planning to hit the slopes. After all, the region in California’s high Sierra hosted the 1960 Winter Olympic Games and is home to a dozen world-class ski areas all within 40 miles of one another. To go without at least attempting to ski or snowboard would appear to be selling your trip short. But if you, for whatever reason, are not there to slide downhill on a plank of some sort, there are plenty of other activities to keep you entertained, active, well-fed, and slaked on both booze and jaw-dropping lake views. 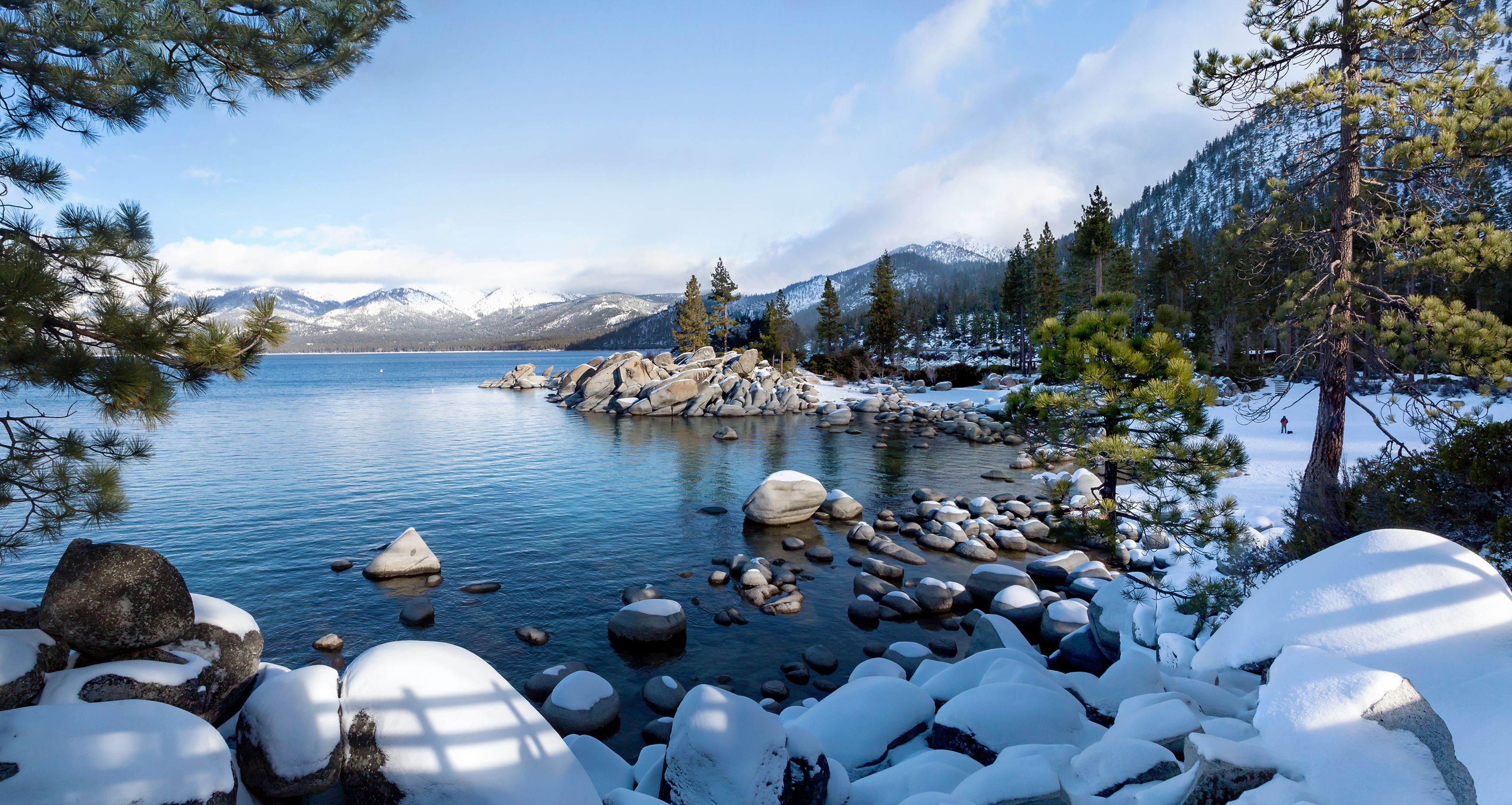 The best way to access the lakeshore in winter is via the brand new East Shore Trail, a 2.8-mile paved path that gets partly snow- and ice-packed in winter, starting at Tunnel Creek Café in Incline Village. (The cafe makes delicious sandwiches you can take with you on the trek.) The trek follows the perimeter of the lake to Sand Harbor, offering you some of the most stunning views across the shimmering water, whether you’re traveling on foot, fat bike, or, depending on the snowpack, cross-country skis. Tahoe Dave’s has several locations in North Lake Tahoe and rents cross-country and snowshoe gear.

In the summer, you’ll see people pedaling along here with paddleboards and picnics in tow, but in winter, you could potentially have the entire trail to yourself — accessing pristine samples of shoreline such as Hidden Beach, free from the summertime sunbathers soaking up rays in the buff. After this North Lake Tahoe hike, hit nearby Alibi Ale Works for well-honed suds and an amicable local’s vibe. 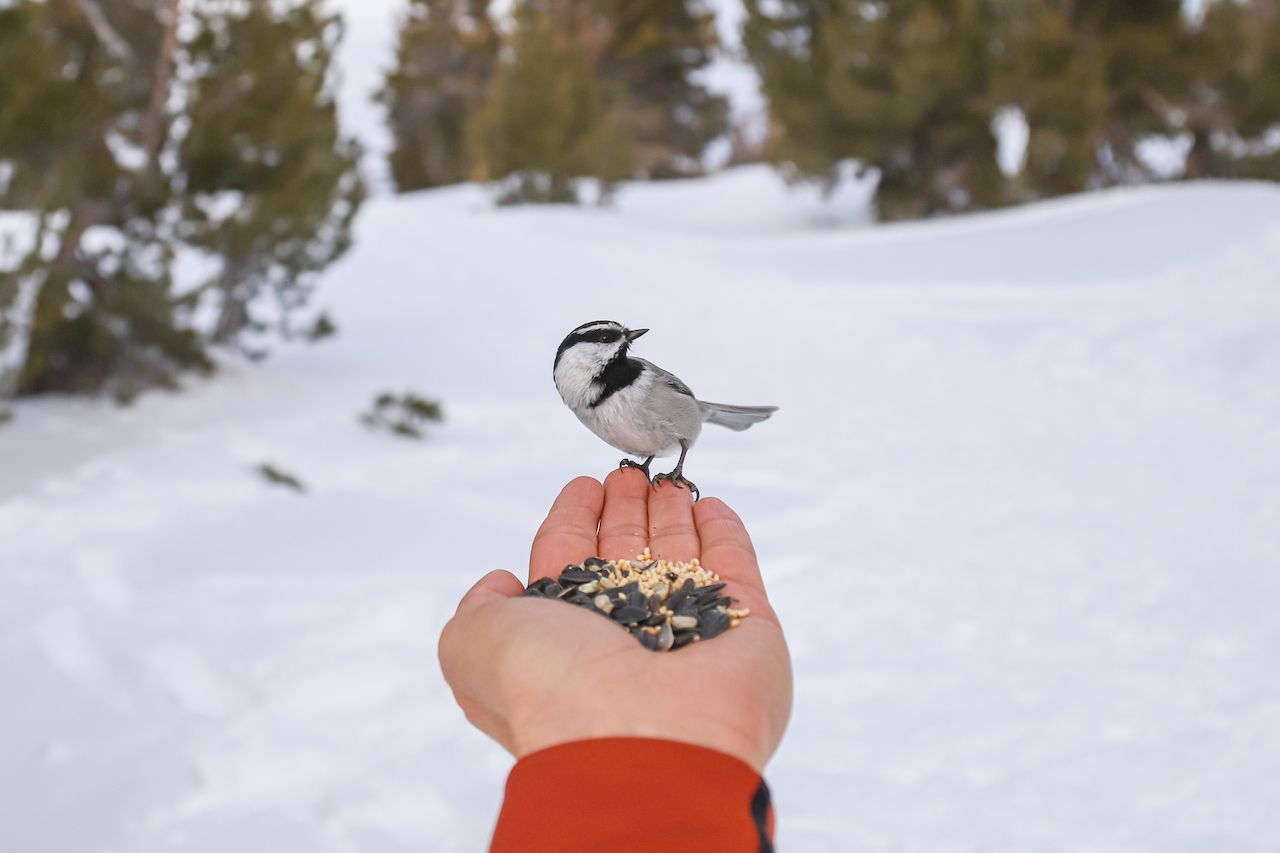 For those willing to work a little harder for their scenery, Chickadee Ridge is one of North Tahoe’s most unique spots for multi-sport recreation. It’s situated just 45 minutes from Reno, Nevada, near the Tahoe Meadows South Trailhead at the summit of the Mt. Rose Highway. The area is a hot spot for sledding, snowshoeing, cross-country skiing, or simply walking through the towering pines along the ridge in search of the friendly little birds. If you have birdseed to offer, the fluttering chickadees will eat right out of your hand — or off of your beanie. Also, the two-mile climb to the top of the ridge will reward you with a pine-framed view of the lake below. 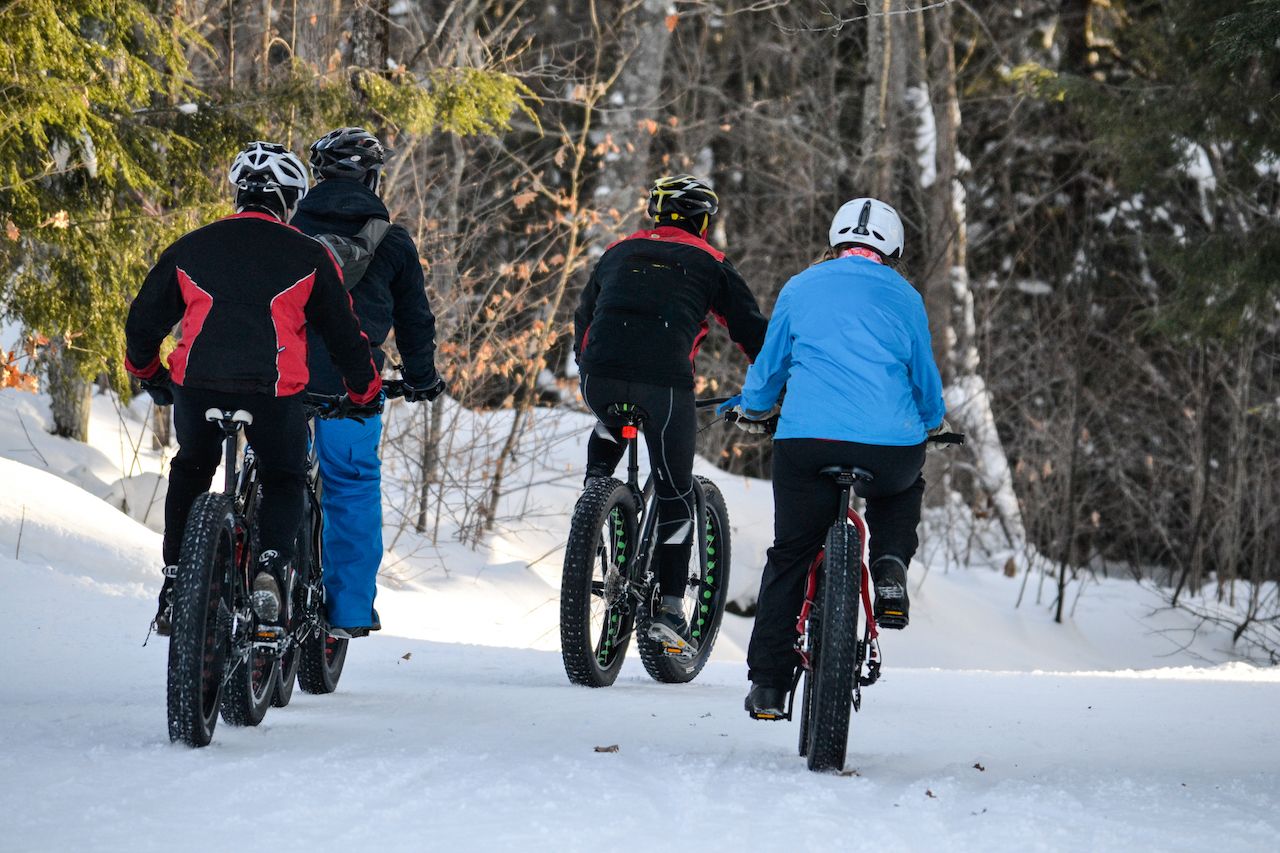 Fat bikes are regular mountain bikes outfitted with extra large tires to handle challenging surfaces like sand or snow. Fat biking is exploding in ski towns across North America and Europe, as it’s an incredible workout and a more eco way to get around wintry landscapes. In addition to skiing, Tahoe Donner offers plenty of designated fat biking trails that you can access with a ticket from as early as 7:00 AM until as late as 5:00 PM; they have a limited number of fat bikes for rent, as well.

4. Join in the festive atmosphere. 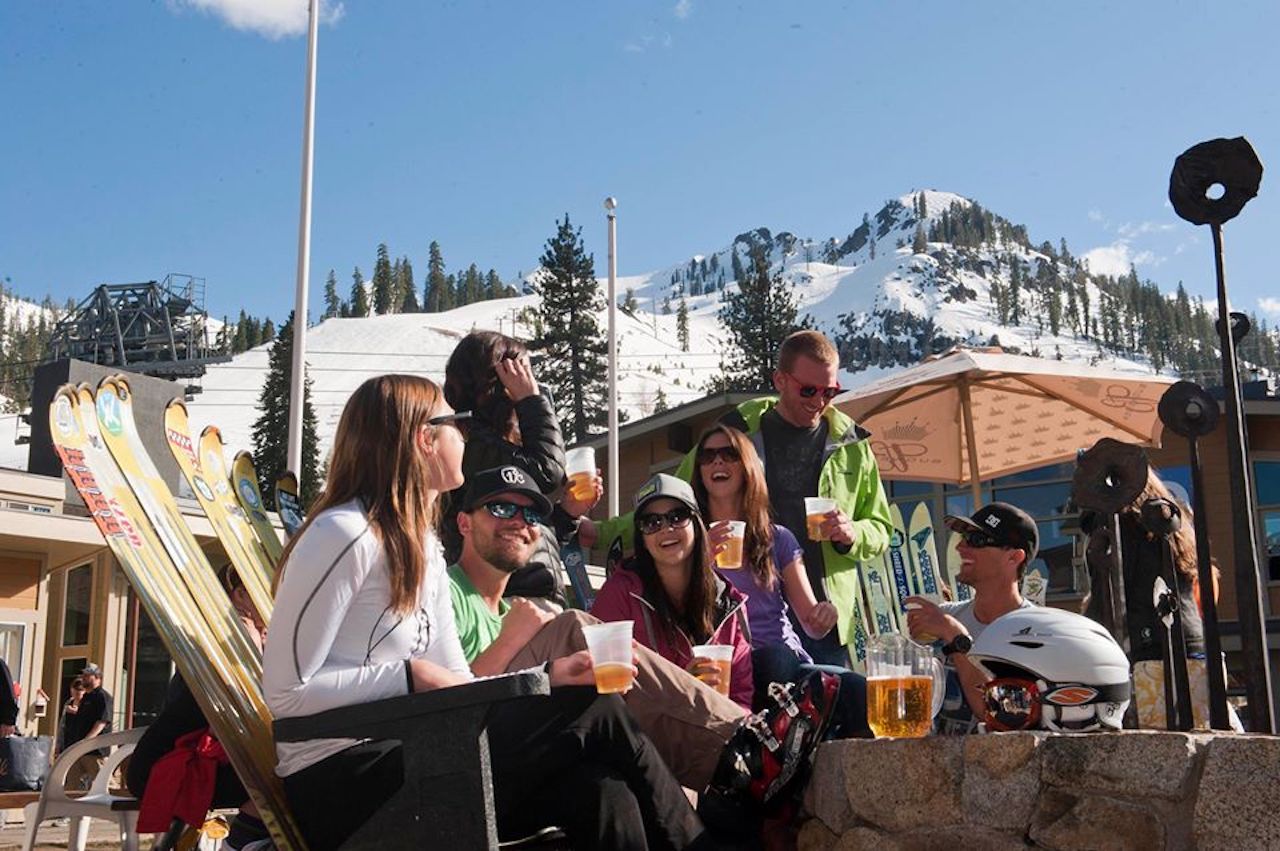 Sure, Squaw Valley Resort is known for its sprawling slopes, but skis or a snowboard are not an essential ingredient to reach the resort’s best views, or even get a little adrenaline rush. Anyone can take an aerial tram ride up to High Camp — although it does cost $49 for adults, it’s free if you have an IKON Pass. There, you get a bird’s-eye view of the cliff-laden ski area. Take in the whole scene over a stuffed Bloody Mary at Granite Bistro Café. In the spring, High Camp is home to dozens of half-clad soakers lounging in the giant hot tub to the soundtrack of a live DJ spinning on the deck.

The base of Squaw is also a great spot for tubing — not just sliding down a fast, snowy track on an inflatable apparatus but doing so amid lasers, lights, and more DJ tunes at what the resort has aptly dubbed Disco Tubing. Or you can just relax around one of the big fires with a pitcher of beer, a plate of nachos, and the afternoon sun. Not much beats the Squaw Valley afternoon scene — even if you apres-ski without the “ski” part. 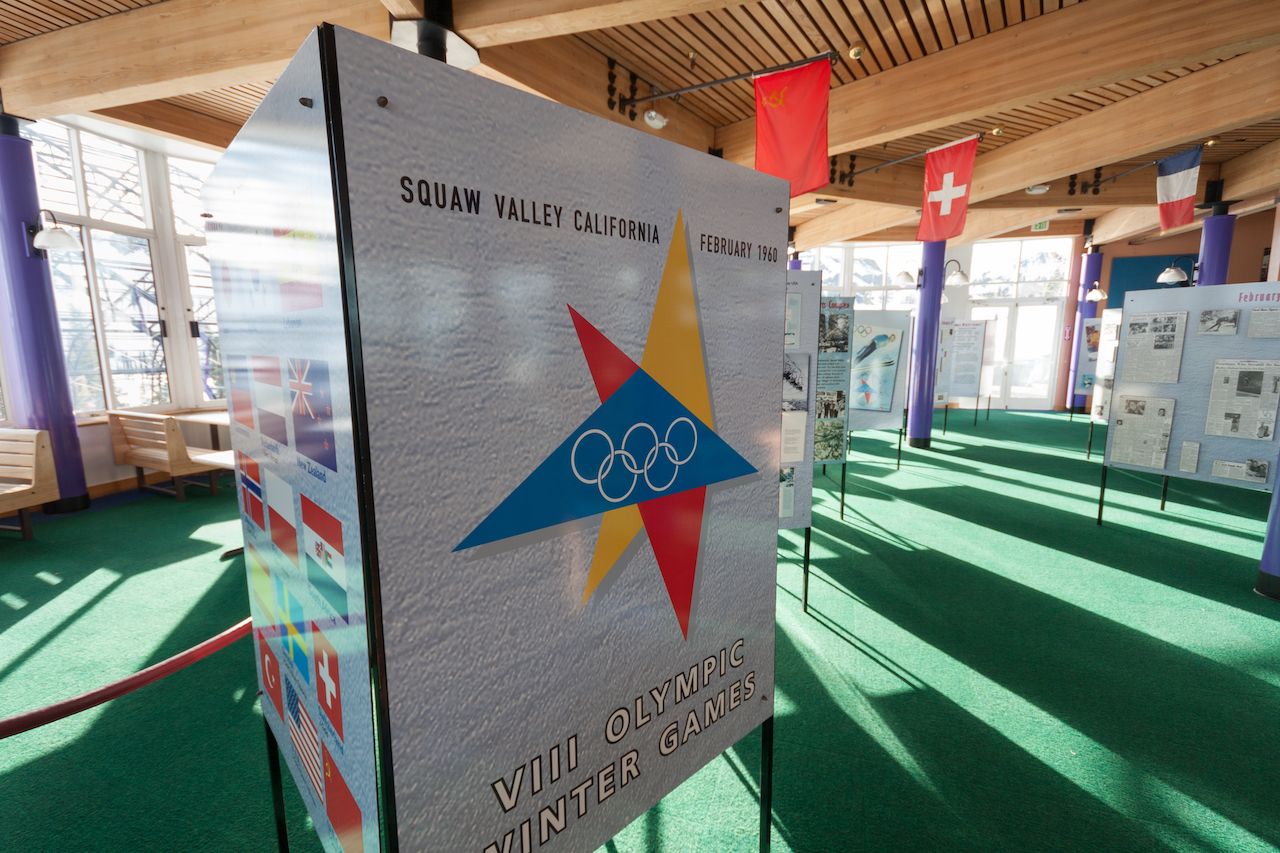 When visiting High Camp, be sure to check out The Olympic Museum, displaying an assortment of one-of-a-kind artifacts, videos, and stories from the 1960 Games. If you’re a yogi, you’ve probably heard of the Wanderlust Festival, which was founded here in Squaw Valley. Squaw is also home to the flagship Wanderlust Yoga Studio, which offers a year-round schedule of just about every type of yoga class imaginable, including vinyasa, power, candle-lit, restorative, and even aerial.

Let’s not forget that the North Shore straddles the California and Nevada borders. Therefore, gambling is not hard to come by. The area’s hub for gaming is Crystal Bay, specifically, the Crystal Bay Casino, which, in addition to offering the standard slots and tables, also hosts a steady stream of A-list concerts and comedy acts. 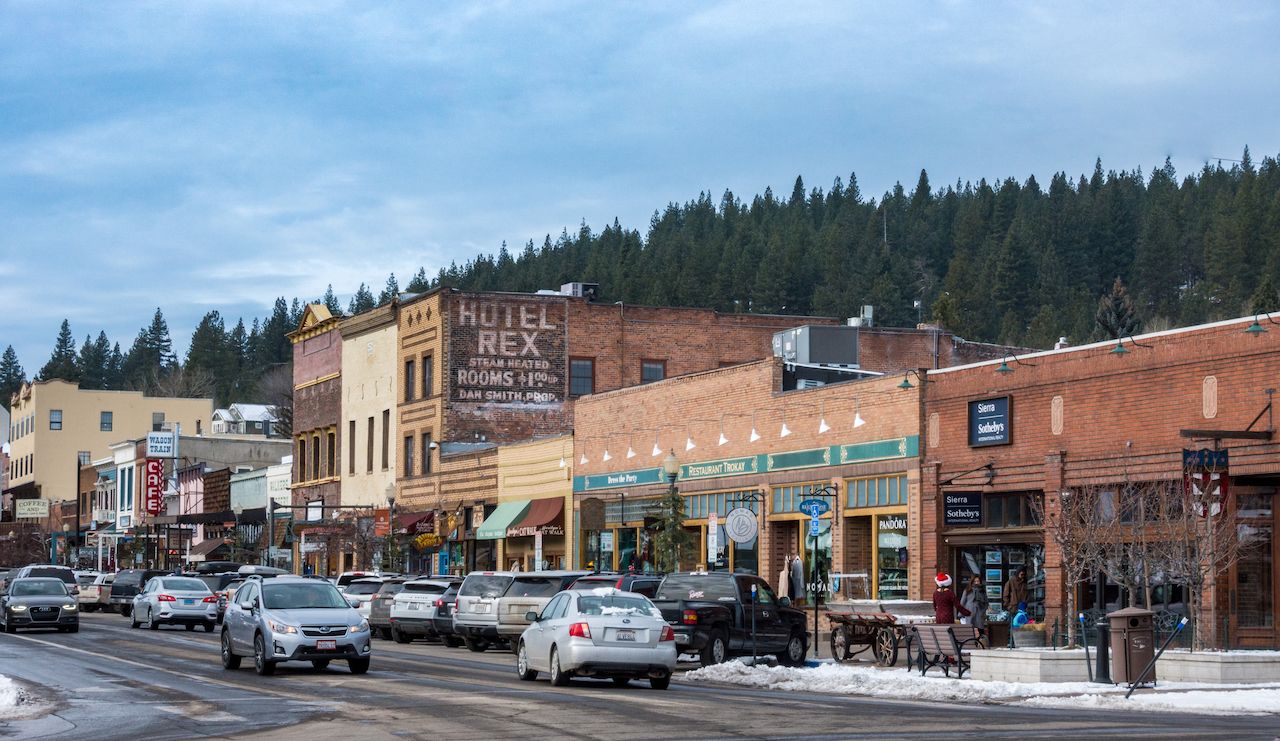 Truckee is an old mining town that grew up with the California Gold Rush 1849 and has kept its old-fashioned charm with its red-brick and wooden Old West interiors. Hang out with a good book and a cup of coffee at CoffeeBar. If you want a tasty wrap or a gluten free pastry with that coffee, you can’t go wrong at Wild Cherries. Truckee has some appealing gift shops like Bespoke, with its scarves and housewares. There are plenty of dinner options, among them Trokay, named for the native American who gave Truckee its name, with its cozy wooden interior and tempting, seasonally changing menu. A longtime favorite, Moody’s Bistro is also a good spot for live music. 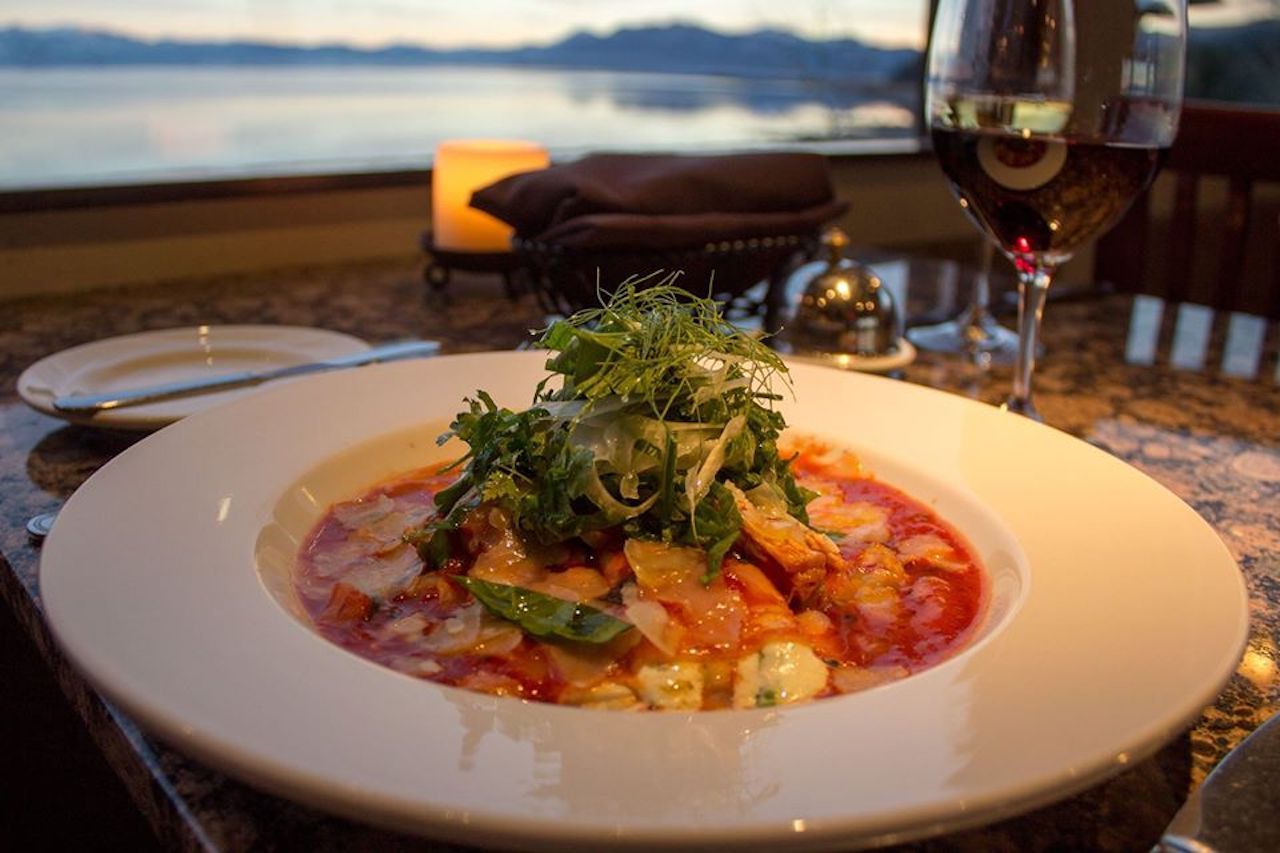 The foodie culture from nearby San Francisco extends beyond Truckee, and North Lake Tahoe is home to myriad diverse dining haunts. A standout for seasonally fresh seafood, produce, and locally sourced meals is the cozy Sunnyside Restaurant. Situated in a log cabin lodge directly on the docks of the lake, it also offers the best sunset-on-the-lake views around, as documented in a recently published book (available at the restaurant) compiling the area’s top sunset photography. In Tahoe City, Christy Hill also offers incredible lake views and an unforgettable, locally sourced menu.

In Squaw Valley, Plumpjack Café, with its superbly mixed cocktails and homemade sourdough and butter wins for fine-dining. But Rocker offers an upscale pub experience with enormous salads and great beer selection while the newly opened Tremigo makes homemade salsa that you’ll want to down by the quart. For breakfast, try a freshly baked bagel at Wildflour Baking Company or an oozing benedict at Fire Sign Café.