Mrs. Anderson, my middle school gym teacher, used to stress the importance of changing your socks as much as possible.

“It’s the single best thing you can do for your personal hygiene,” she’d say.

I’m still not sure of the wisdom in telling a bunch of 12-and-13 year-olds that changing socks is more important to personal hygiene than showering, but it stuck with me nonetheless.

To this day I still change socks three to four times a day, and when packing for long trips taking 20 pairs of socks isn’t uncommon. Maybe this is why I always check bags.

So when a guy named Owen wrote to me about something called MP Magic Socks, which he said I could wear for six days without washing, it went against everything I’d ever known.

Saying you could wear socks for six days in a row and still not smell seemed a little like saying you could eat nothing but Doritos for six days and not gain weight. Maybe if you’re some kind of genetic freak you can pull it off, but for anyone else it’s a pipe dream up there with home ownership.

Apparently, the socks work by infusing the fabric with copper, silver, and zinc, which work in tandem to kill odor-causing bacteria. This is known as the oligodynamic effect, and without getting too science-y, it basically works a little like a home invasion where the copper ions break down the fence outside the bacteria — or cell wall — so the silver can get inside and wreak havoc. Despite silver being terrible for them, proteins inside bacteria are actually highly receptive to it and welcome it once inside, kind of like humans do with cigarettes or toxic exes.

Much like in those situations, it does not end well for the bacteria. With the bacteria effectively neutralized, the socks are left stink-free and fresh-smelling. They’re not too expensive either, though more than the average sock. Individual pairs of socks run for about $10, while a package of six classic crew socks costs $48.

Sold on the science of the socks, I thought I’d at least give them a try to see if no-smell socks were really a thing. After all, I’d been similarly skeptical about no-wash shirts, and that experiment worked out just fine. 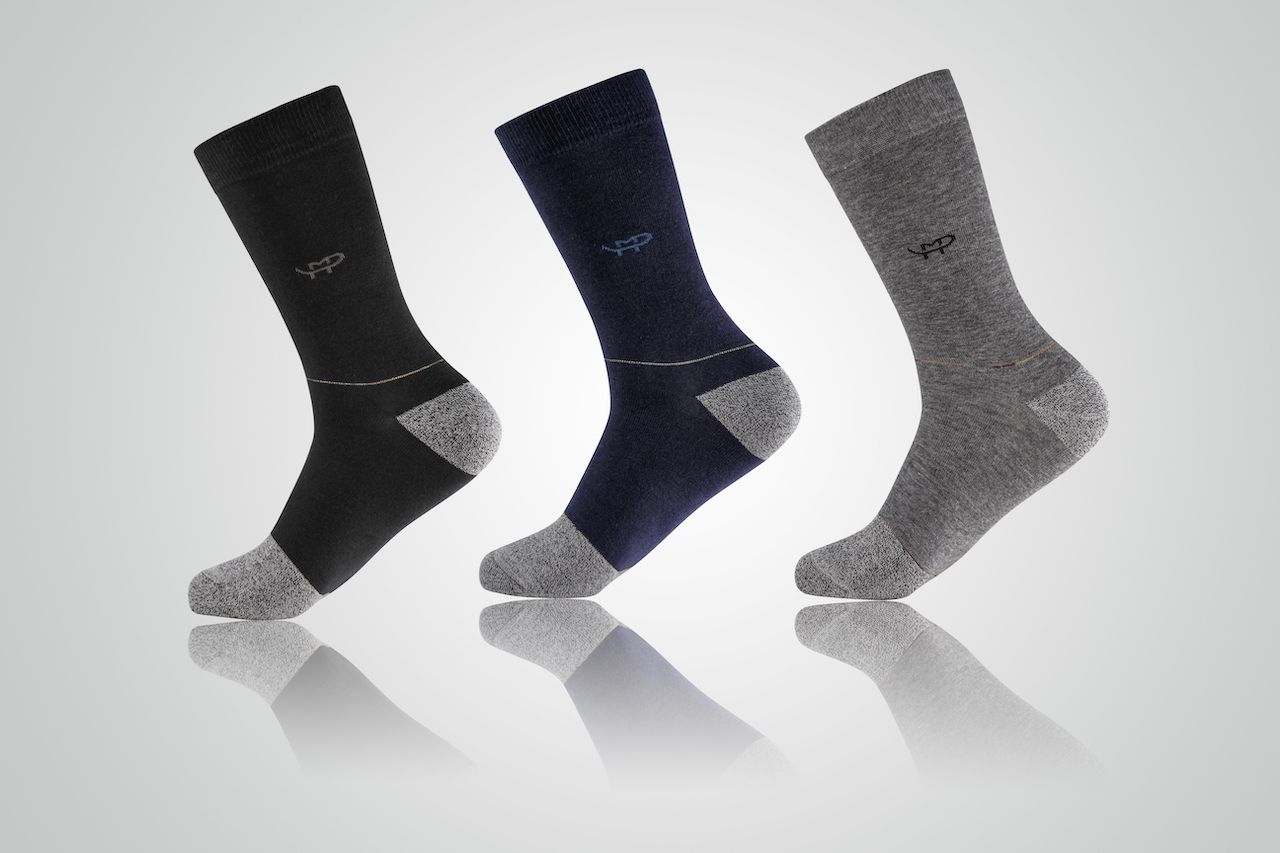 If I was going to give Magic Socks a chance, I felt I should put them to the ultimate test first: An early-season college football tailgate. In Florida.

This was no ordinary tailgate but rather the season-opening game between the University of Florida and University of Miami, held in Orlando. Which meant instead of sitting around a tent and grilling burgers like I would at a home tailgate, the day was spent walking from parking lot to parking lot in midsummer central Florida, spilling light beer and ice luge shots all over the thin, ankle-cut athletic socks MP had sent me.

After the grueling tailgate, the game itself was four hours of standing, followed by an excessively long walk home when the game let out the same time as a Backstreet Boys concert and the city ran out of Ubers. Once I finally got home, I took my socks off, and they smelled like a midsummer Florida tailgate. The next morning, they had not improved.

“This is bullshit!” I said to one of my friends who’d come with me.

“Maybe they don’t guarantee against smells from day-old Coors Light,” he countered. Perhaps he had a point. When reading up on the oligodynamic effect, the study hadn’t mentioned anything about barley and hops.

Round Two: The cruise ship

I absolutely hate having to cram all my clothes into a carry-on, but sometimes it’s necessary — like when you’re sharing a tiny cruise ship cabin on a “Runaway to Paradise” cruise with Jon Bon Jovi.

Realizing socks accounted for roughly 20 percent of my packing space, I felt this might be an ideal time to give the Magic Socks another go. Despite having nice dinners scheduled every night, and full days walking around Mallorca and other ports, I packed only two pairs of socks: one pair of thicker athletic crew socks and a nice pair of dress socks emblazoned with yellow dolphins.

Each day I would spend traversing the still-sweltering Balearic Islands, hanging up my Magic Socks in my small cruise room. Not once did I return to anything resembling a locker room smell.

I wore the dress socks to dinner each night too. The first night, I was a little flattered when someone at my table caught the dolphin pattern and said, “Oh, nice socks!” Her reaction was not nearly as friendly when she spotted the same pattern the next night, or the night after, probably immediately branding me as “that guy who wears the same socks every day.”

Point is, while the dress socks may have smelled fresh after each night out, if you’re seeing the same people over and over maybe pick ones without cute dolphin patterns. 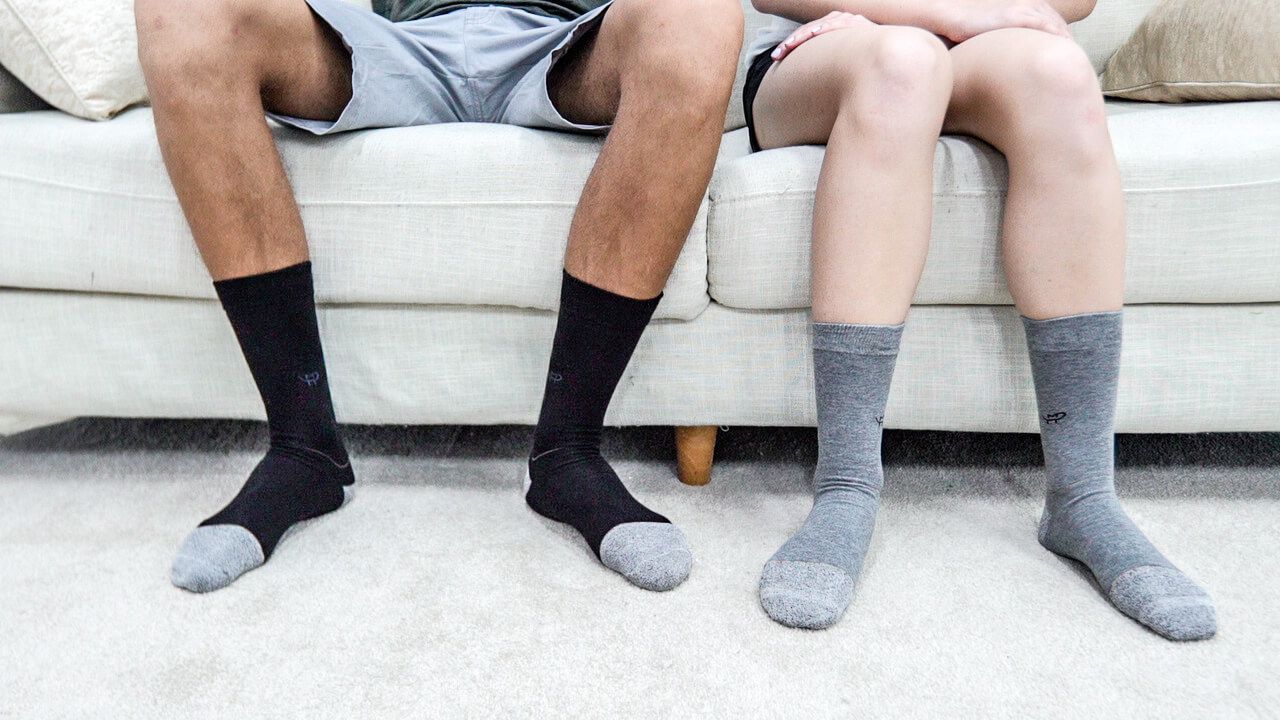 Emboldened by my success using the socks to travel, I thought perhaps they’d work at home too, and maybe I could finally clear out the two drawers of socks taking up valuable space in my apartment. This worked well for a couple of days, as wearing socks for everyday stuff like grocery shopping, dinner, and Orangetheory had them working at their copper-and-silver-infused best.

This held true until I visited a friend who has multiple dogs. And if you know anything about people with multiple dogs, their lives are basically a giant cloud of dog hair. One evening of walking around their apartment later, and the Magic Socks were in desperate need of a washing. This wasn’t just true of dog hair either: wearing them around the house for a few days, the socks pick up all the dust, dirt, and other hair that lives on your floor, and can get a little grimey even if they don’t smell.

Again, the oligodynamic effect doesn’t really extend to dirt repulsion. So even if the socks smell fine, they may still need to be washed if you wear them excessively without shoes. What I’m saying is, maybe invest in some magic sandals too.

Round 4: The Amazon jungle

The final test for the Magic Socks seemed almost as difficult as the mid-August tailgate: a four-day cruise through the Peruvian Amazon. Now, granted, this was not an extended trek where I’d be using these socks to slog through Amazonian mud bogs. But still, each day involved plenty of humid hiking. And in the Amazon, you could have socks made out of chalk and they’d still never dry out.

The Amazon was perhaps the most encouraging test of all, where I used the athletic crew socks to hike each day, and though they never dried, they never smelled bad either. Since literally nothing I had in the Amazon was dry the entire trip, I barely even noticed. So it seemed the Magic Socks would be a good choice for backpacking trips, or the odd quest through the Amazon jungle.

So did the odorless socks change my perspective on sock-wearing? Kind of. They definitely backed up their claims, as aside from stale beer, the things never really got too stinky. But the Magic Socks also only win one of the many battles socks face in staying clean, so while they might not smell, they can still get covered in dirt, and stay wet in environments where it’s tough to dry.

I’ve found the dress socks massively helpful for trips where I’ll need multiple pairs over multiple days, as they don’t usually touch dirt and don’t get that wet. And the athletic socks are good if you’re only using them for sports and not, say, walking around an apartment covered in dog hair. Understanding those limitations, I’d happily send any middle schooler to Mrs. Anderson’s gym class for a week with only one pair of Magic Socks. But maybe we’d need to give her a short chemistry lesson first.

FashionMoney Belts Are Making a Comeback, and They Actually Look Cool Now
Tagged
Technology + Gear
What did you think of this story?
Meh
Good
Awesome