Overpacking may be one of my worst qualities. As a Marine, my pack during field exercises routinely weighed five to 10 pounds more than others. Now as a travel writer — another job where you’d think light packing would be an essential skill — I check a bag for any trip longer than a weekend.

It’s not that I pack 100 different outfits, necessarily. It’s just that I don’t like wasting travel time doing laundry, and I never want to be somewhere and think, “I wish I hadn’t left that at home!” When you need a new shirt, new socks, and a new set of gym clothes every day, you’ve filled up two-thirds of your suitcase before you even start thinking about dinner clothes.

The solution, then, would be finding a piece of utility clothing — a t-shirt or gym attire — you could pack one of for a trip. This seems counter-intuitive and gross since that’s usually the stuff that gets dirtiest, which is why I was so intrigued when I got a pitch from a company called Unbound Merino for “the only shirt you’ll ever need.”

Unbound Merino is one of many companies that designs clothing that theoretically never needs to be washed. Ably Apparel makes some. As does Mack Weldon. I’d heard about them from frequent-traveling friends, offering advice on how to lighten my load. But the $65 price tag scared me away.

But Unbound Merino offered me a shot to try it free, sending me a snazzy blue crew-neck t-shirt and a pair of black socks. Which I took — with only a couple of backup shirts, just in case — on a 12-day press-trip tour of the Carolinas and Northeast Indiana.

So how do no-wash clothes work? 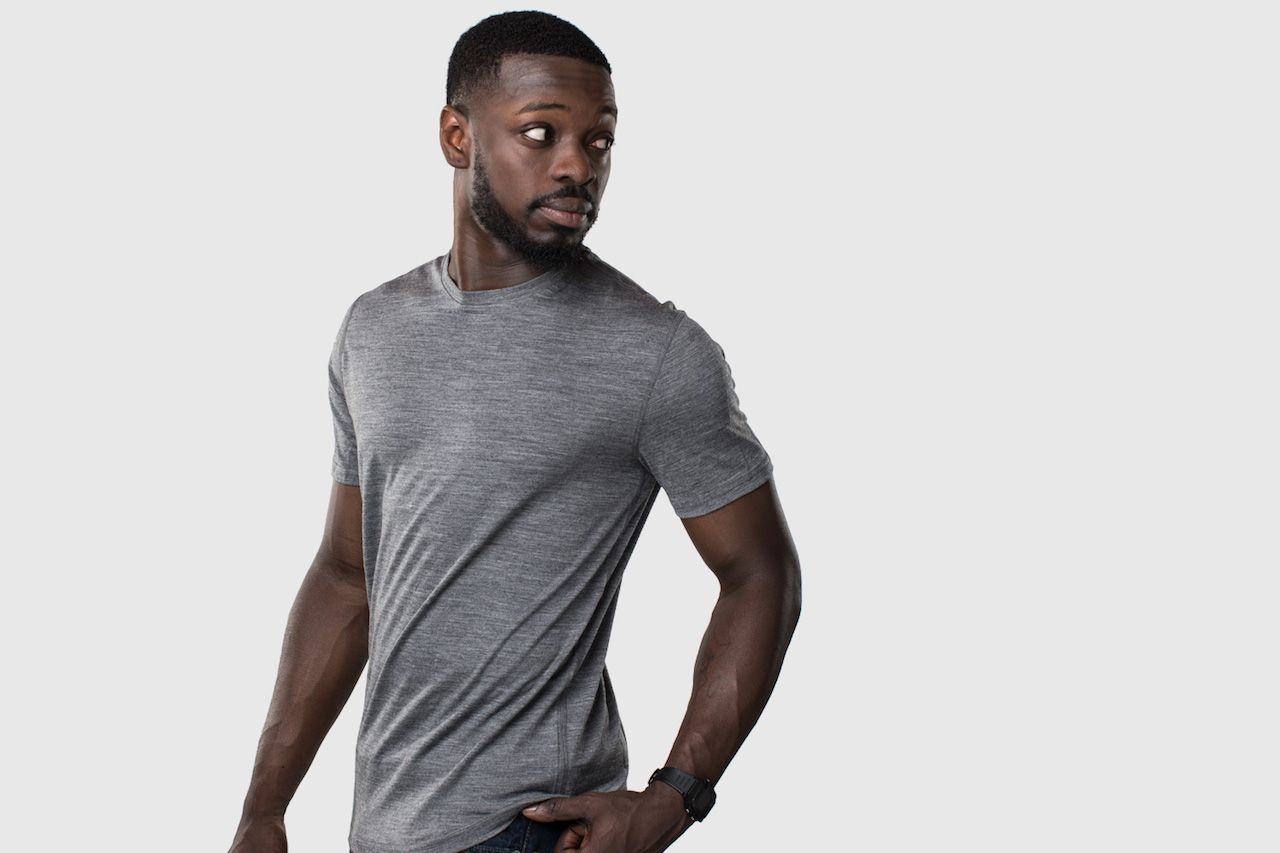 My biggest question about these magical no-wash clothes was how, exactly, they keep from getting dirty. The fabrics vary by manufacturer, but Unbound Merino uses merino wool. It’s a thin-strand wool from Australian and New Zealand sheep that apparently wicks away moisture so that odor-causing bacteria have nowhere to grow. No bacteria, no funky clothes.

The wool keeps you cool because it’s full of tiny air pockets that relax when your body heat rises, releasing hot air away from your skin. This keeps you cool on hot days or while exercising and is popular among skiers, snowboarders, and other winter athletes.

Armed with this research, I left decked out for my first of many days in a blue crew neck for the Fall For Greenville festival in Greenville, South Carolina. I’d been selected as a judge, tasked to sample 49 dishes in 24 hours. As one who is physically incapable of eating a bowl of pasta without the necessity for dry cleaning, it seemed like this experiment might not last long.

Inevitably, when I tried a bacon-avocado-cheeseburger sample, a good portion of every ingredient landed on the front of my shirt. But unlike absorbing into the fabric, the errant bacon grease just beaded up like water on a duck’s back and slid right off. Ten minutes later, you’d have never known I ate like an eight-year-old.

The next morning, when I put on my shirt for day two of judging, it reeked of neither meat nor sweat, and though the next afternoon had me walking miles through the crowded festival in fall heat, by Sunday brunch the shirt and socks were still smelling sweet.

I spent Sunday at a friend’s house grilling meat and smoking cigars. And though my jeans now smelled like an episode of Mad Men, the shirt smelled perfectly politically correct.

The next morning I left for Asheville, North Carolina, where I met up with an old friend from college for a week of drinking beer and playing in the mountains.

“Dude, how do I smell?” I asked as he picked me up from the airport. He looked confused.

“Fine?” he said. “Did you wear a special cologne for me or something?”

“No, but I’ve been wearing this shirt for five days. Does it smell yet?” He sneered, appropriately. I explained the experiment.

“That’s nasty,” he said. “Although I will say, I wouldn’t have noticed. I’ll let you know if you start smelling.”

The shirts stay clean… to a point. 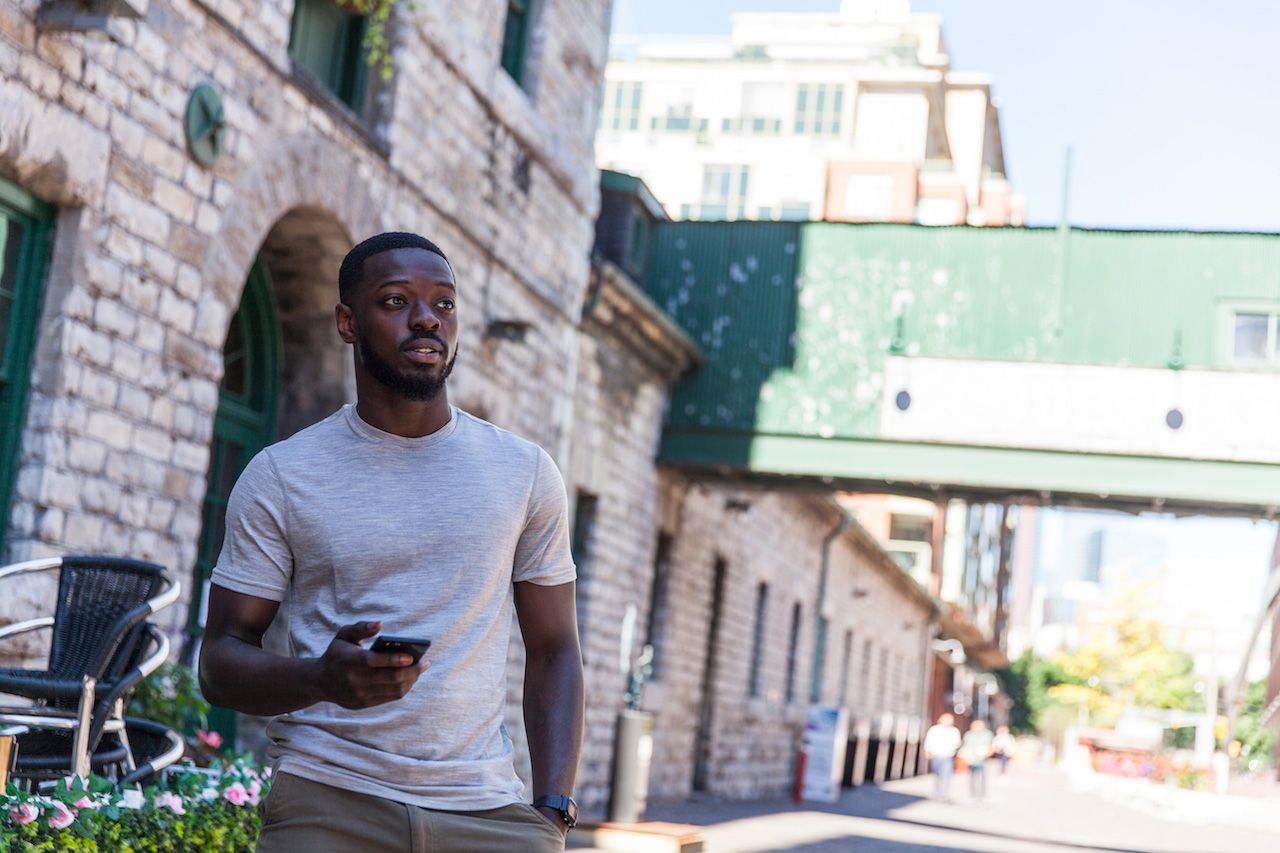 In Asheville, I learned the shirt’s limits. After riding a motorized mountain bike in a torrential downpour through the mud of the Biltmore estate, I was soaked in wet dirt. Even though I’d worn a jacket, the Unbound Merino shirt was saturated. And glittering.

Apparently, the hills of western North Carolina are filled with mica, which blended with the mud and made me and my friend look like we’d spent the afternoon at a particularly filthy Kesha concert.

When I returned to my hotel, my shower became a dirty glitter bomb as I spent a good 10 minutes trying to get the mica out of the shirt. After doing the best I could, I hung it in the hotel bathroom and hoped it would be dry the following day.

Though the care instructions say to air dry it, by the next morning it was still soaked. This was a little disappointing as I was now forced to break my string of consecutive days in the shirt. It would be another day before I could beat the remaining glitter and dust off the shirt and wear it again.

“You still look like you spend the night at a strip club,” my friend in Asheville told me when he picked me up for lunch. “But you don’t smell.”

This was also the point where I realized the merino wool socks smelled like a middle school locker room. It’s harder to wick away moisture when the socks are surrounded by shoes, I surmised. So I had to retire them a week into the experiment.

A couple of days later in Ft. Wayne, Indiana, I decided to really put the shirt to the test as I was nearing the end of the 12-day voyage. I wore the shirt to a heavy metal show at a dive bar where there may have been more cigarette smoke on the outdoor patio than oxygen. I may have also had a domestic beer spilt on me, followed by a whiskey shot, followed by another to-be-identified liquid. I woke up the next day fully expecting my blue crew neck to smell like a used bar mat. Surprisingly, it was fine.

That night I took the shirt for its final test: a long, sweaty workout. Typically, during a 60-minute exercise class, I soak through a dry-fit shirt by the end of my warmup. And while I could definitely feel sweat getting into the wool, making it uncomfortably itchy, it never got even close to drenched. Eleven days into the trip, the sweat beaded up and rolled off like the bacon grease night one.

I hung it up to dry for the night, fully planning to wear it on the plane home. Worst case scenario, I ended up on Passenger Shaming.

Bolstered by a few beers at the Ft. Wayne airport Sam Adams Taphouse, I sat down next to the mild-mannered looking man next to me on my flight home and promptly greeted him by saying, “Just FYI, I’ve been wearing this shirt for two weeks. If you wanna get up and move, I won’t be offended.”

He gave me a look like I’d just told him I was going to steal his in-flight magazine, not really all that bothered but wondering why I felt the need to tell him.

“Well,” he nodded without much intonation. “Appreciate you telling me. Any reason?”

“It’s for a story,” I said, explaining my job and why I was doing this. “Honestly, I’m excited to wear something else tomorrow.”

He seemed fascinated and looked up Unbound Merino on his phone. He told me he traveled a lot for business and thought this might help him pack more casual clothes when he’s gone. No idea if he ever made a purchase, but the shirt clearly has an appeal.

I took my blue crew neck off that night, put it in my dry cleaning bag, and haven’t looked at it since. Not that I don’t like the shirt, it fit well and was exceedingly comfortable. But it’s like eating pizza every day for a week, after that you don’t want to see it for a while.

The shirts aren’t cheap, but they are worth it if you like packing light and don’t mind wearing the same thing every day. And they keep their claim of staying clean unless you take them on rainy-day dirt bike rides. I’ll hold onto mine for times when packing as little as I can is crucial, though I still like the freedom of choice when I’m traveling. That said if you hate checking bags more than you hate repetitive wardrobes, these shirts are your new favorite item. But maybe get it in more than one color.

Technology + GearThe Best Gifts for the Outdoor Lover in Your Life Are on Sale at REI Right Now
Tagged
Technology + Gear
What did you think of this story?
Meh
Good
Awesome