You know you’re having fun when you can smile with mud splattering your face.

I was staring up from my overturned Outrider bike at a spinning rubber wheel as it dripped cold, wet mud in front of the silver Carolina sky. The wind was knocked out of me, but as far as I could tell, I had no noticeable injuries, just a big childlike smile.

“You ok?” Hunter, my guide, yelled from somewhere closer to the Biltmore estate.

“Hell yeah!” I yelled as a sprung to my feet and wiped my face on my “waterproof” jacket. “Little mud never killed anybody.”

In fact, mud probably has killed a lot of people, but it didn’t do a whole lot to spoil the good time I was having at Biltmore in Asheville, North Carolina. I had just taken a muddy, slippery off-road turn a little too fast and toppled one of the attraction’s new Outriders, a three-wheeled motorized recumbent bicycle designed for off-roading. It’s a little like an electric mountain bike for those who don’t want to pedal. 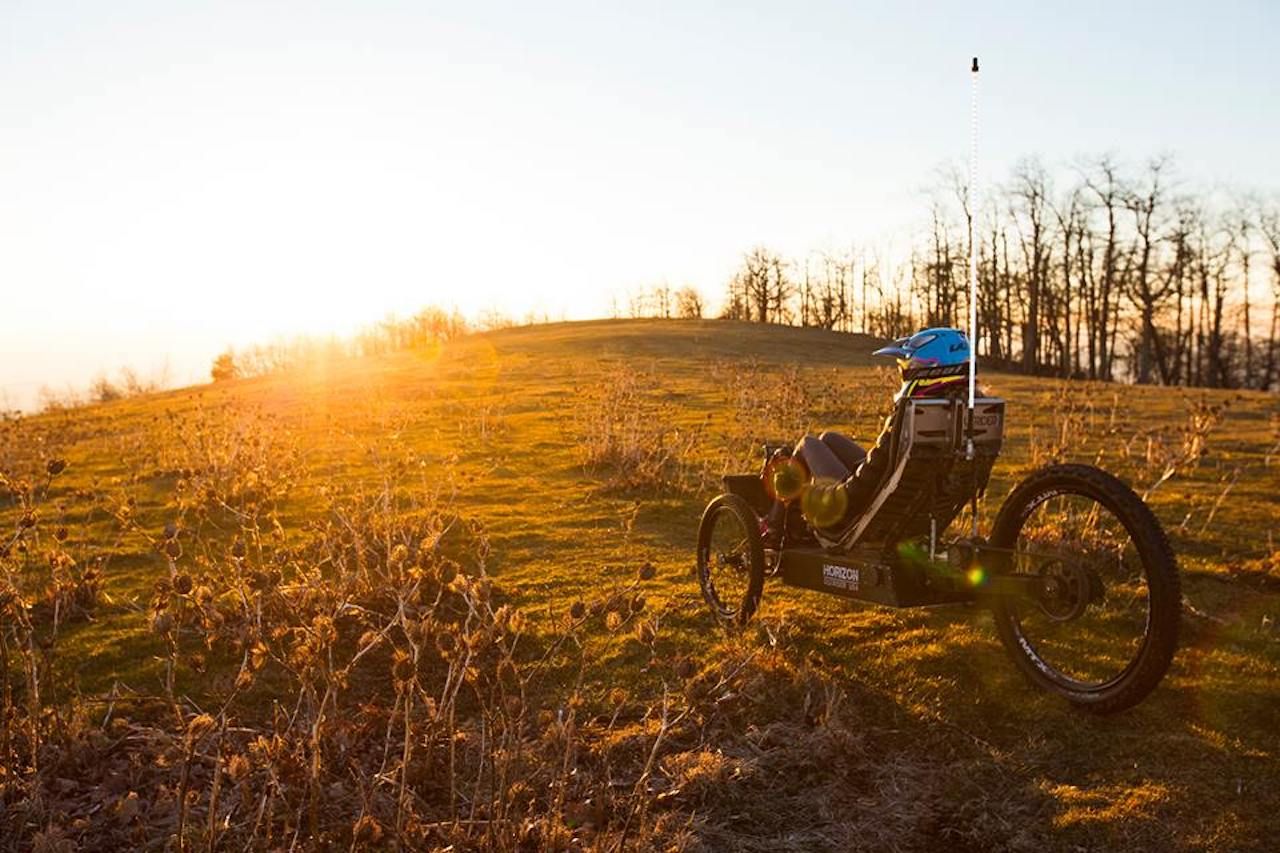 I spent the cold, rainy afternoon speeding alongside Biltmore’s slippery hills, fording small streams and tearing through otherwise unreachable terrain. On a sunny summer day, we’d have been contending with tens of other machines and not had the mud-filled fun we did that afternoon.

This is the kind of experience you get in Asheville in the winter when the hordes of beer-chugging bachelor parties and musical pilgrims have gone home for the winter, and the city returns to the hands of the locals.

“Asheville was never meant to be a tourist town,” says Meherwan Irani as we enjoy a lunch of Indian street food at Chai Pani, his Asheville outpost that has become one of the most sought-after tables in the city. “It was meant to be a local community. So, yeah, come in the winter, and you’ll experience it as it really is.”

Determining what a city “is” is a relative term. An existential crisis, if you think too much. But what Irani means is the hippie, artsy mountain town America fell in love with over the past decade or so changes when it’s full of visitors. And winter is when you’ll find the authenticity that made it so popular in the first place. 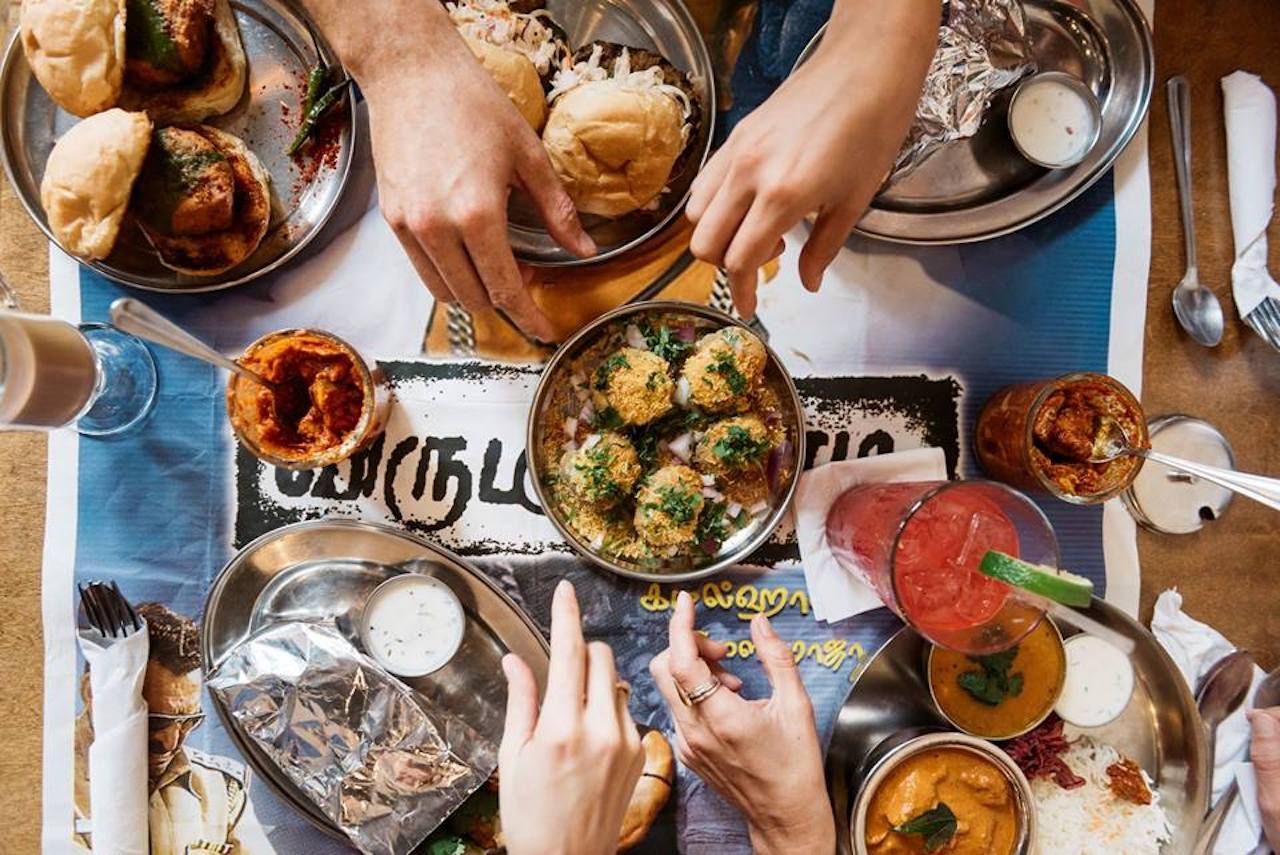 At Chai Pani, the Monday afternoon crowd is pretty light. Irani takes the time to explain why his menu is devoid of the curries and vindaloos we’re accustomed to in American Indian restaurants, and why I should try his pav bhaji, a mixed vegetable hash with chillies and cilantro on buttered buns.

“This is what people eat in India,” he tells me excitedly. “Street food. Indian families drive hours here because this is stuff they can’t get anywhere else.”

Normally he wouldn’t have time to even greet a table, much less explain the cuisine.

A short walk through downtown and underground, and I’m at One World Brewing where service-industry types chat with the beertender, who tells me I’m the first out-of-towner he’s seen all day. He didn’t seem particularly busy, and actually had time to explain to me intricacies of his Hempin’ Ain’t Easy hemp ale, a pilsner made from hemp seed. The crowd was the young, college-aged, grizzly, tattooed types who were all too happy to suggest places I should see around Asheville. They also said they were usually too busy working during the summer to give recommendations like that to visitors.

Asheville in the winter: a cozy mountain escape with campfires and comfortable recreation. 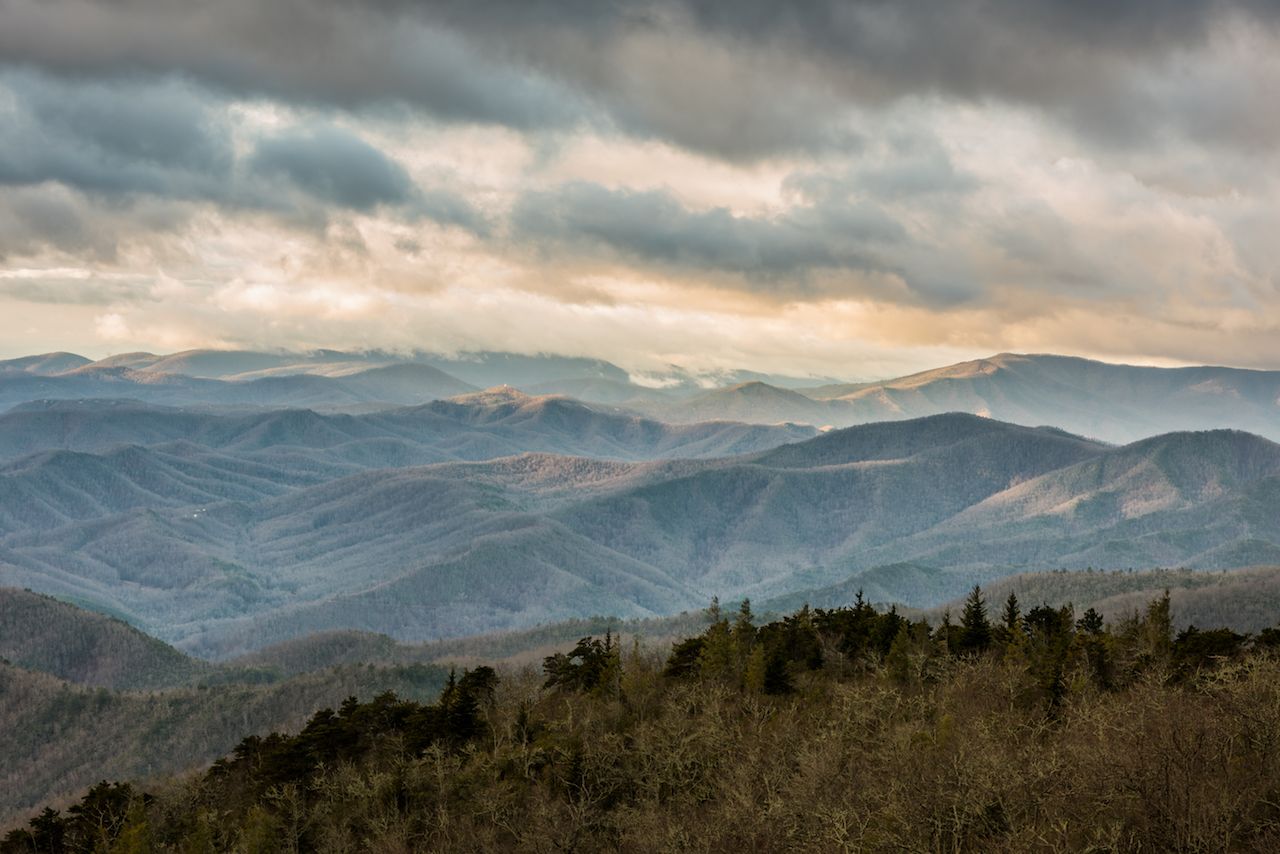 The cold makes Asheville feel a little cozier in the winter as the snow covers the Blue Ridge Mountains, and you can watch the sunset at rooftop bars with glowing fire pits. You can take a tour of these bars if you’d like, but if you want to self-guide, start out at the AC Hotel’s Capella on 9 where you’ll have a stunning shot of the Art Deco downtown as you enjoy a fireside Glamper’s Smores — Laird’s applejack, allspice cacao mezcal dram, lemon, creamy egg whites, and charred marshmallow.

Wicked Weed trades its five-deep lines during summer for front yard fireplaces where you can enjoy its famous Freak of Nature double IPA in the brisk mountain air. Even venerable Sierra Nevada gets into the winter firepit act with patio fireplaces on the French Broad River that on a cool, clear day make for a refreshing day trip out of town.

Asheville is known as much for its outdoor adventures as it is for its beer, and though you won’t get a tan while hiking in the winter, the experience will be easier. While hiking through the changing leaves up the three-hour trail along the ruins of Rattlesnake Lodge, I felt the cool air bringing my body temperature down as my guide from Blue Ridge Hiking Company led a vigorous pace uphill.

“In the summer, I have people DYING on this thing,” she exaggerated. Hopefully. She told the story of one woman who hiked with her to a fire tower with a spectacular view on a particularly hot summer day and refused to hike back.

“Heat got to her,” she said, reminding me hydration is the key to any good hike. “You won’t worry about that in winter.”

What’s more, she added, in the winter the leaves have fallen from the trees, and the views of the valley below were even more spectacular.

Farther out of town, one of the best winter hikes near Asheville is the Lover’s Leap Loop Trail. It boasts a short, accessible journey from downtown Hot Springs, North Carolina, to a natural hot spring where you can warm up in a natural mineral bath. The spring’s steam warms the chilly mountain air as your muscles recover from a day of strenuous activity.

The city’s famous mountain bike and treetop adventure courses are also open in the winter, without the usual glut of summer camp and corporate retreat groups that clog the wires at the Adventure Center of Asheville. The treetop ropes course here is unlike any you’ve ever seen, where you’ll scale a climbing wall, slide down a fire pole, ride a snowboard, and zip line between all of them nearly 20 feet above the ground.

James Beard restaurants, minus the waits. 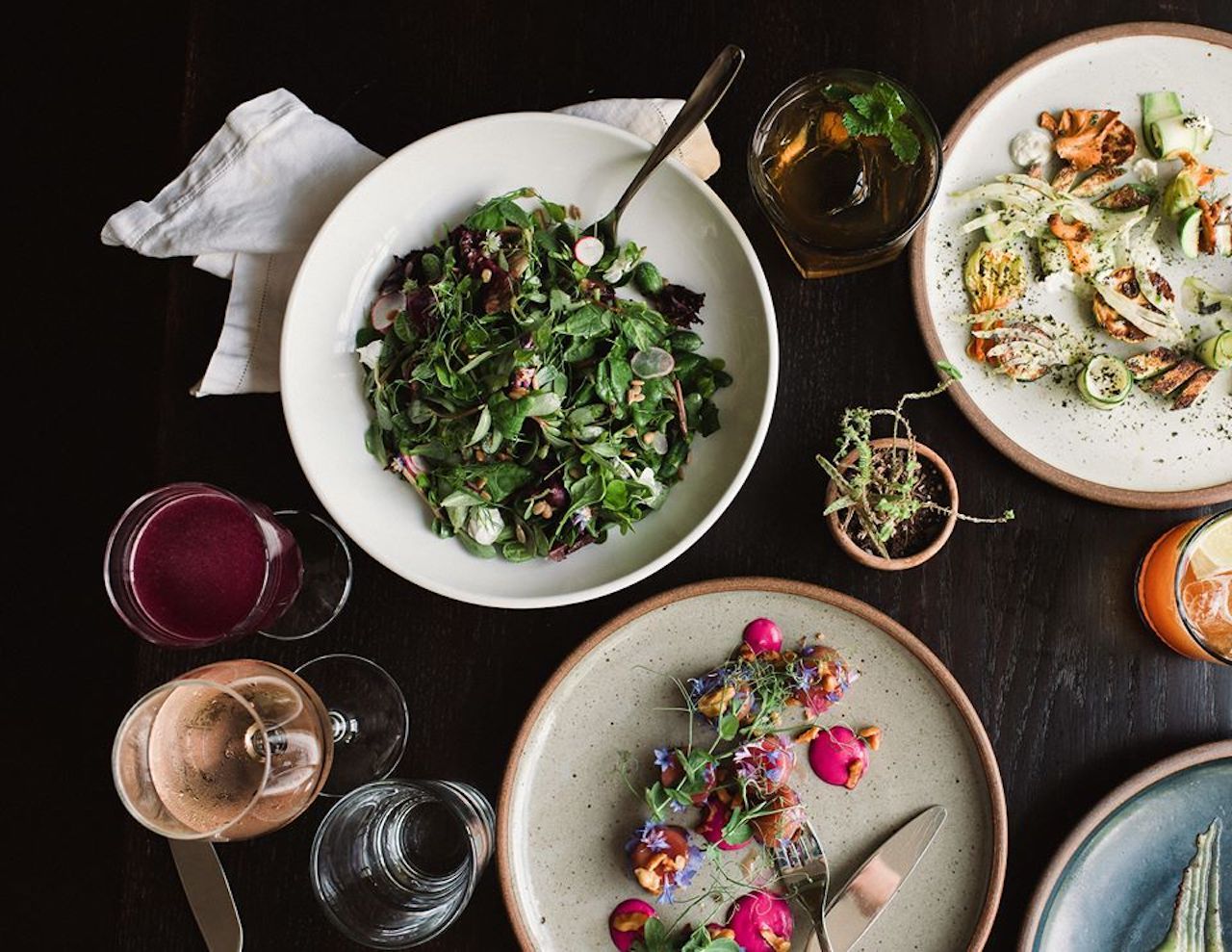 Asheville’s food scene has begun to eclipse beer and adrenaline as Asheville’s biggest draw, boasting James Beard nominations for Katie Button of Curate and Nightbell, Leah Wong Ashburn of Highland Brewing Co., and David Bauer of Farm & Sparrow this year. The problem, of course, is once those nominations come in, so do packs of tourists. In the summer, anyway. Once the weather gets cold, anyone can get a table at spots like Button’s Curate or Posana, even locals.

“We do most of our cool events in the winter,” says Chai Pani’s Irani. “That’s when locals can get back in the restaurants again and connect with the chefs and workers.”

The homey, fresh country farm cuisine feels more welcoming when it’s cold, too. Walking in the front door of Sovereign Remedies on a misty Thursday night, I’m met with an immediate blast of warmth, followed by a wave of garlic, carrots, and stewing meats. It was a little like walking into my mom’s house after a long November Sunday of football in the park, warming up with the smells of home cooking.

The menu is full of stuff like bone marrow tater tots and bavette steak with green tomato and banana pepper. And though many locals only know the place as a cocktail bar, it’s one of the most comforting places to get a winter meal in America.

At the Isis Music Hall, about 10 minutes from downtown, chef Jeffrey Potter plans winter menus to complement whatever style of music the restored old deco theater has playing that night. December will host an Italian string group one night, for example, accompanied by a menu of classic Italian food and cocktails, with some Italian cinema to end the evening.

The city was made famous for its beer, and you spend the evening bouncing from brewery to brewery, from the macabre Burial Beer to the massively popular Catawba, sours at Funkatorium, and ciders at Urban Orchard. End the night with a soothing cocktail at Antidote, an offshoot of South Slope’s first distillery Chemist, or at locally popular Little Jumbo. During a Tuesday happy hour at the latter, owner Chall Grey seems to know everyone at the bar by name and is greeted by each patron who walks in. 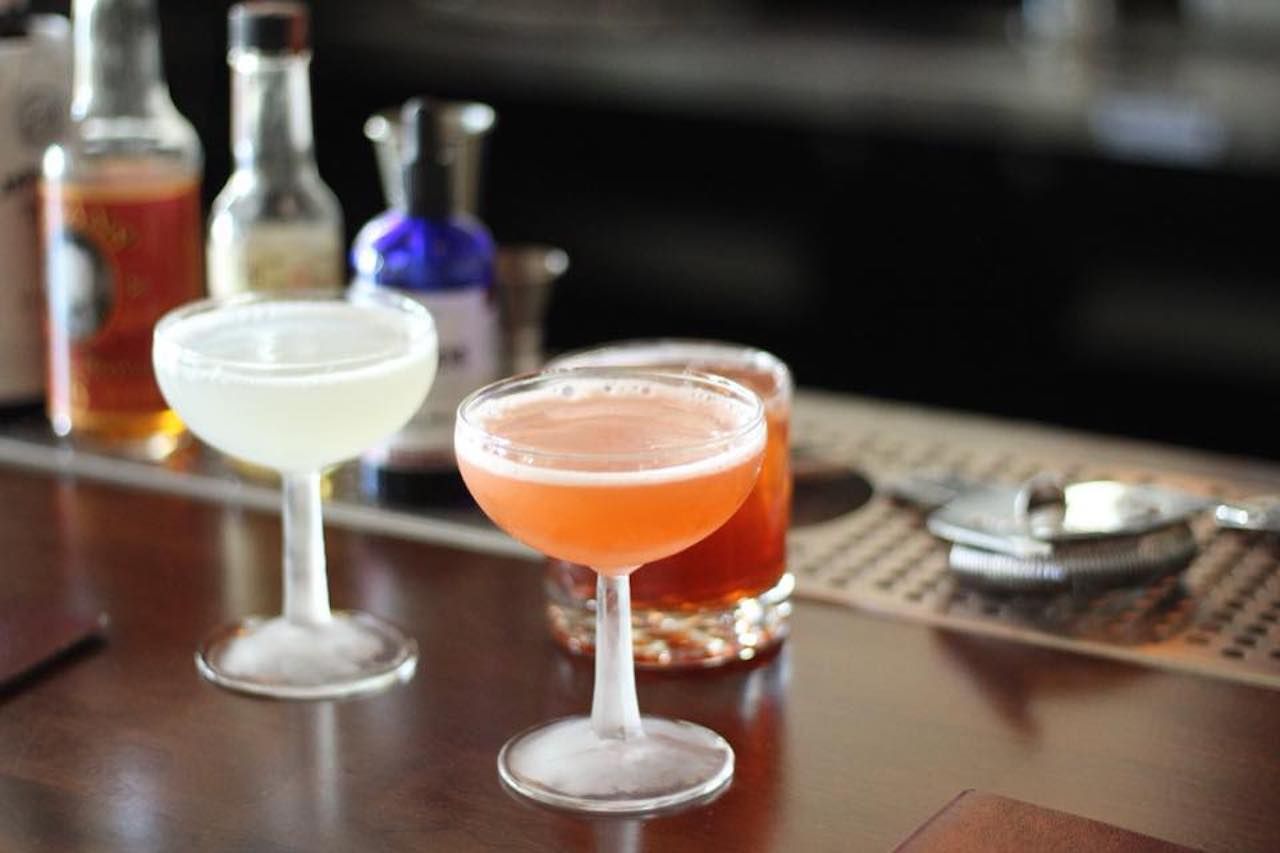 “I wanted to be a little ways from downtown,” he said. “So [visitors] have to know about this place to find it, but locals have a cocktail bar they can come to and not fight for a drink.”

Still, I felt completely welcomed at Little Jumbo as a visitor. Even after the wave of tourists flocking to Asheville, the city still abides by the code of southern hospitality.

The balancing act of a booming tourism economy and maintaining local authenticity is a tough one. But Asheville, at least in the winter, seems to have it down. While going to a mountain city with no real skiing in the winter might seem counterintuitive, it’s actually the best time to come here. It’s a chance to see the Asheville you heard about years ago — the hippie, funky city that was the cool antithesis of what some pictured in Appalachia. Just make sure to go slow on the turns if you take an Outrider tour.

The Best Airbnbs in Asheville, From an Urban Treehouse To a Coffee Shop Loft