Like the other New York City boroughs, the Bronx is a series of unique neighborhoods. There is one thing that ties many of these neighborhoods in the Bronx together, though: a beloved local Italian bakery.

While Belmont (the inspiration for A Bronx Tale) is the undisputed Little Italy of the outer boroughs, other areas — such as Allerton, Morris Park, and Pelham Bay — each has that one neighborhood bakery that supplies local residents and restaurants. The Italian bakeries in this list are neighborhood institutions where locals bump into their neighbors on Saturday morning and where their parents’ wedding cake likely came from.

If you’re having dinner in one of the Bronx’s Italian restaurants, the bread on your table probably came from one of these bakeries. You can see references to these neighborhood fixtures on t-shirts and reusable shopping bags. There are murals along Arthur Avenue depicting the local food scene and walking tours that will introduce you to the local flavors and history. The corner of East 187th and Cambreleng is named after Vincent F. Artuso Sr. Gino’s Pastry Shop, and a reference to the stop even made it onto a Broadway stage thanks to Chazz Palminteri.

While NYC neighborhoods have changed over the decades (and continue to change), the places on this list remain pretty much the same as they were decades ago despite changes in management and local demographics. The consistency over the years has made fans. Even when local celebrities like Chazz Palminteri and Vincent Pastore leave the old neighborhood, they still crave the cannoli and pane di casa of their childhood. And due to the impact of COVID-19 on the Bronx’s historic Italian shops, shipping has become more important than ever, as people still need their cannoli fix.

Here are seven Italian bakeries in the Bronx that have stood the test of time and continue to survive despite these unprecedented times. 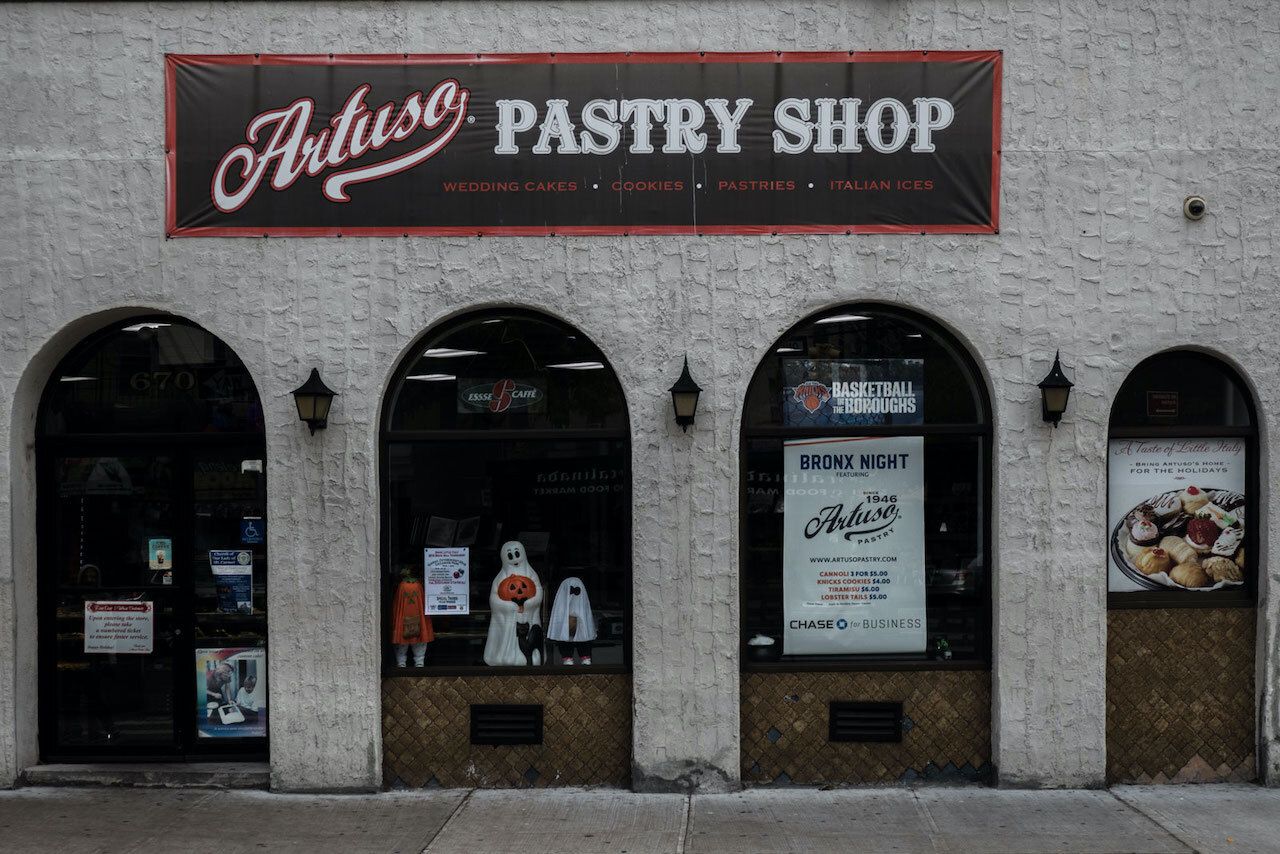 The corner of East 187th and Cambreleng is named after Vincent F. Artuso Sr. Although it’s been open since 1946, on the inside, Artuso Pastry Shop feels like they just opened last week. Behind the counter, HD screens display the prices of whole cakes, which seem to go out the door as fast as the cherished individual cannoli. When it comes to red velvet cake, Artuso’s combination of light, airy cake and thick, sweet frosting is worth the trip from Manhattan, Long Island, New Jersey, Connecticut, etc. And they ship Monday through Wednesday.

Since the pandemic, Artuso has put up a tall plexiglass barrier to protect staff and patrons. Besides this, there’s little visual evidence of impact from COVID-19. 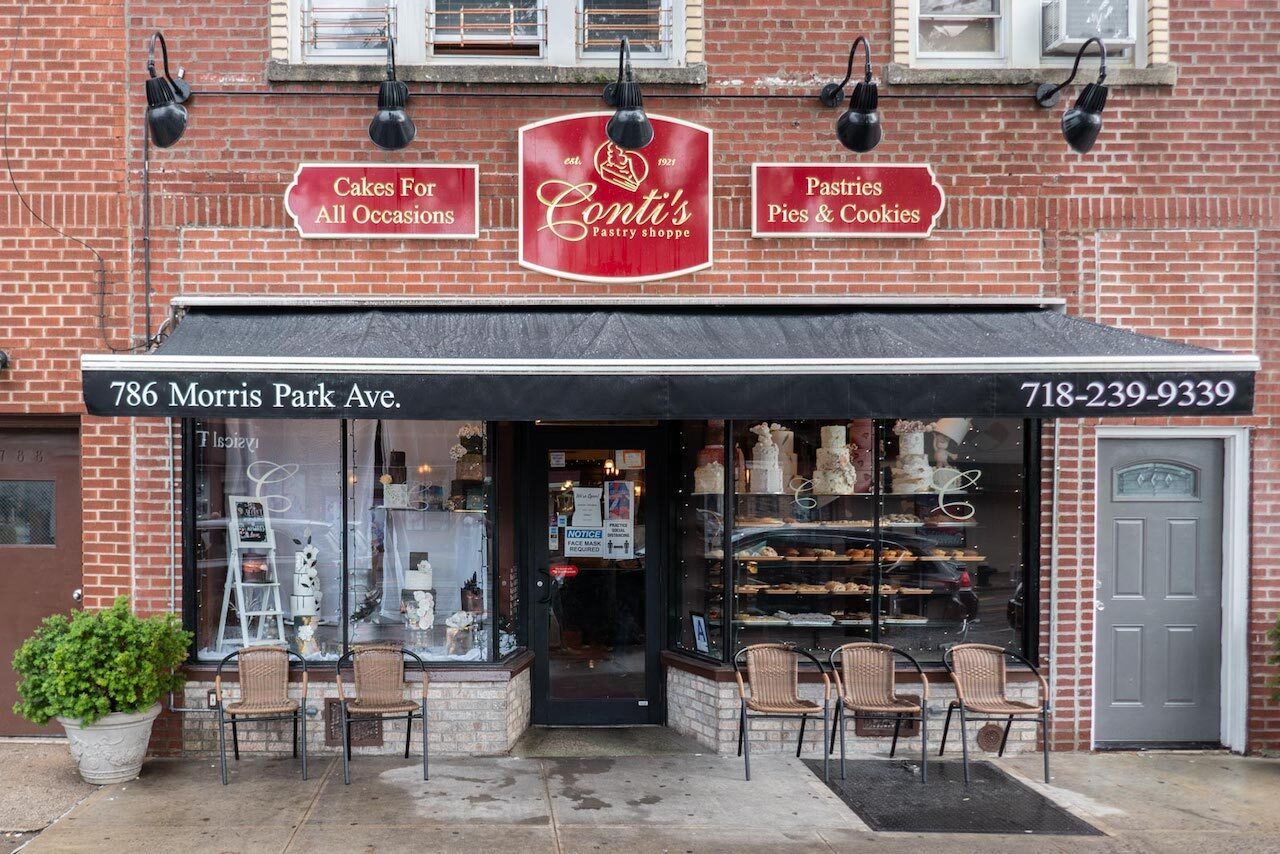 If Belmont is the real Little Italy, then Morris Park is the hidden one. It’s the kind of neighborhood where you have to know where to go. It may take some research and talking to locals, but when you find the right places, it’s well worth it. Conti’s Pastry Shoppe is one of those places.

When it comes to creative cake designs, Conti’s takes (or sells?) the cake. No fewer than a dozen different creative cake designs are always visible from the entrance at Morris Park Avenue, and there are even more on the inside. While other places in this list stick to tradition, Conti’s pushes the envelope with options like confetti cake slices topped with French macarons and cakes in the shape of a Chicago-style pizza. The bakers also combine favorites like marzipan and cannoli cream with delicious results.

Since COVID, the bakery has removed its chairs and couches. As of this writing, there is still no indoor dining. Despite going to takeout only, Conti’s remains as busy as ever. When you enter, the pastries are on the right, and the café is to the left. You can still purchase from the café, but it’s takeout only. 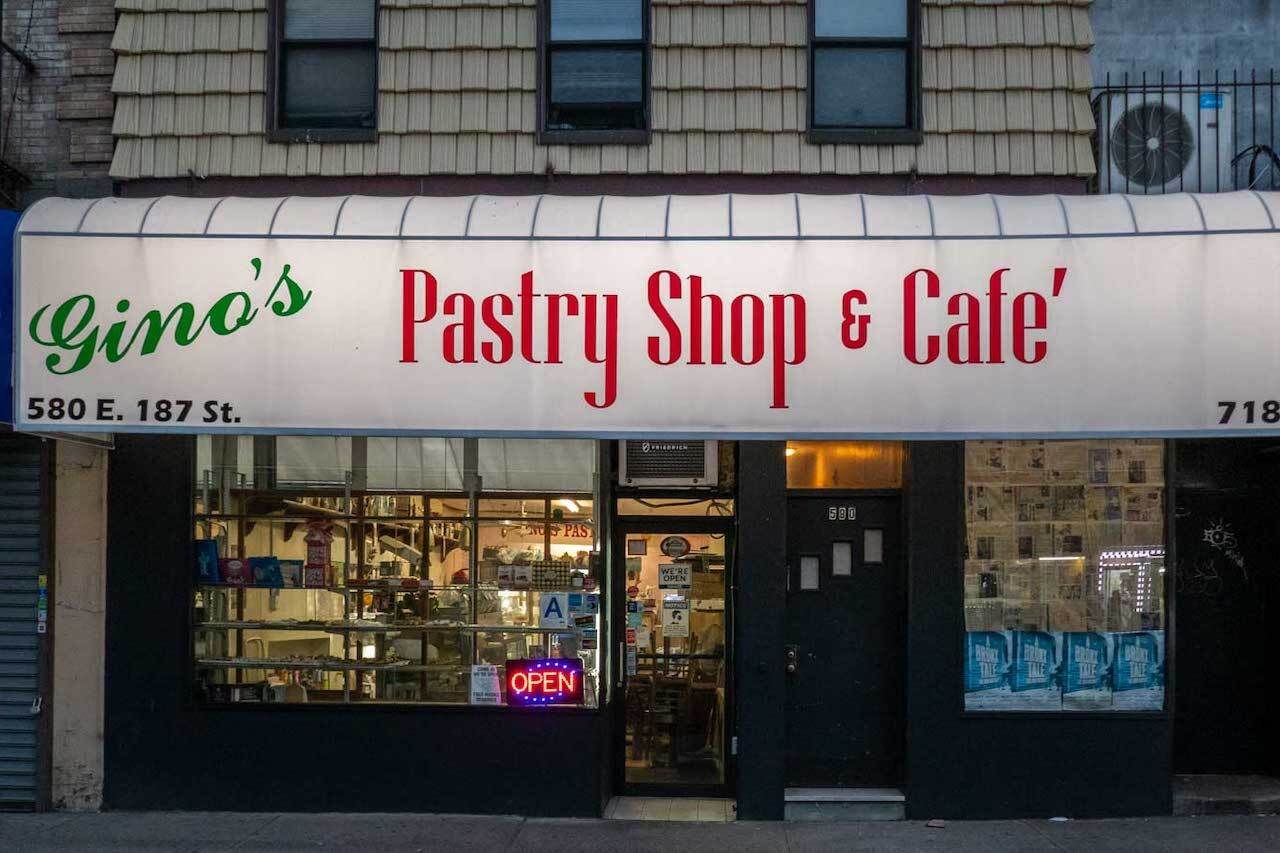 You may have heard of Gino’s Pastry Shop from the musical A Bronx Tale. The sign from the play sits proudly below the numerous autographed celebrity pics that adorn the walls of this neighborhood institution. Although Gino’s specializes in wedding cakes, it also has a small storefront that feels like it hasn’t changed much since the doors first opened in 1960.

Bronx Little Italy native Chazz Palminteri swears by this place to the point where it was the only Bronx bakery that he mentioned in the “Bronx Tale” episode of his podcast. And Palminteri is not the only loyal customer Gino’s ships to. UPS trucks stop by Gino’s on a regular basis to pick up shipments for Vincent Pastore and others who remain hooked on the bakery’s cannoli cream.

Since COVID, Gino’s has cut back store hours from six to four days a week. But where shipments were once an occasional favor for loyal customers, it’s since become a major part of their business. Owner Jerry Raguso frequently works with other neighborhood bakeries and delis on gift packages for people who have been unable to come to 187th and Arthur Avenue in person. He only takes orders by phone. It’s best to stop by and meet him first. 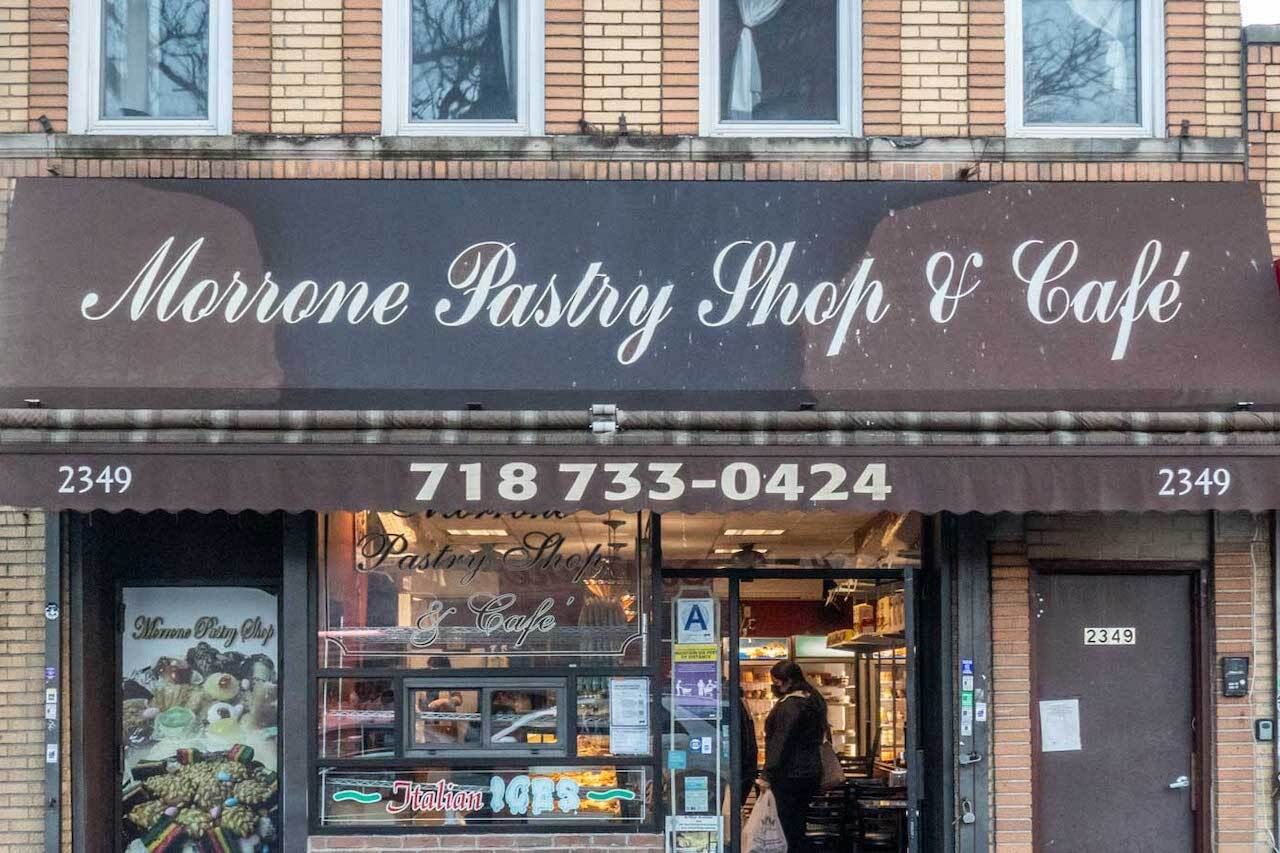 A relative newcomer to Arthur Avenue, Morrone opened in 2006 in one of the most convenient locations possible. Soft Italian music greets patrons along with the smell of Italian espresso, which Morrone imports from Italy. Morrone is part pastry shop and part café with a half-dozen small, marble-top tables. Frozen desserts and Italian sodas are available as well as pastries and coffee.

As the new kid on the block, Morrone was hit particularly hard by COVID-19. While the shop had to lay off some staff and cut back hours, the selection remains at pre-COVID levels. 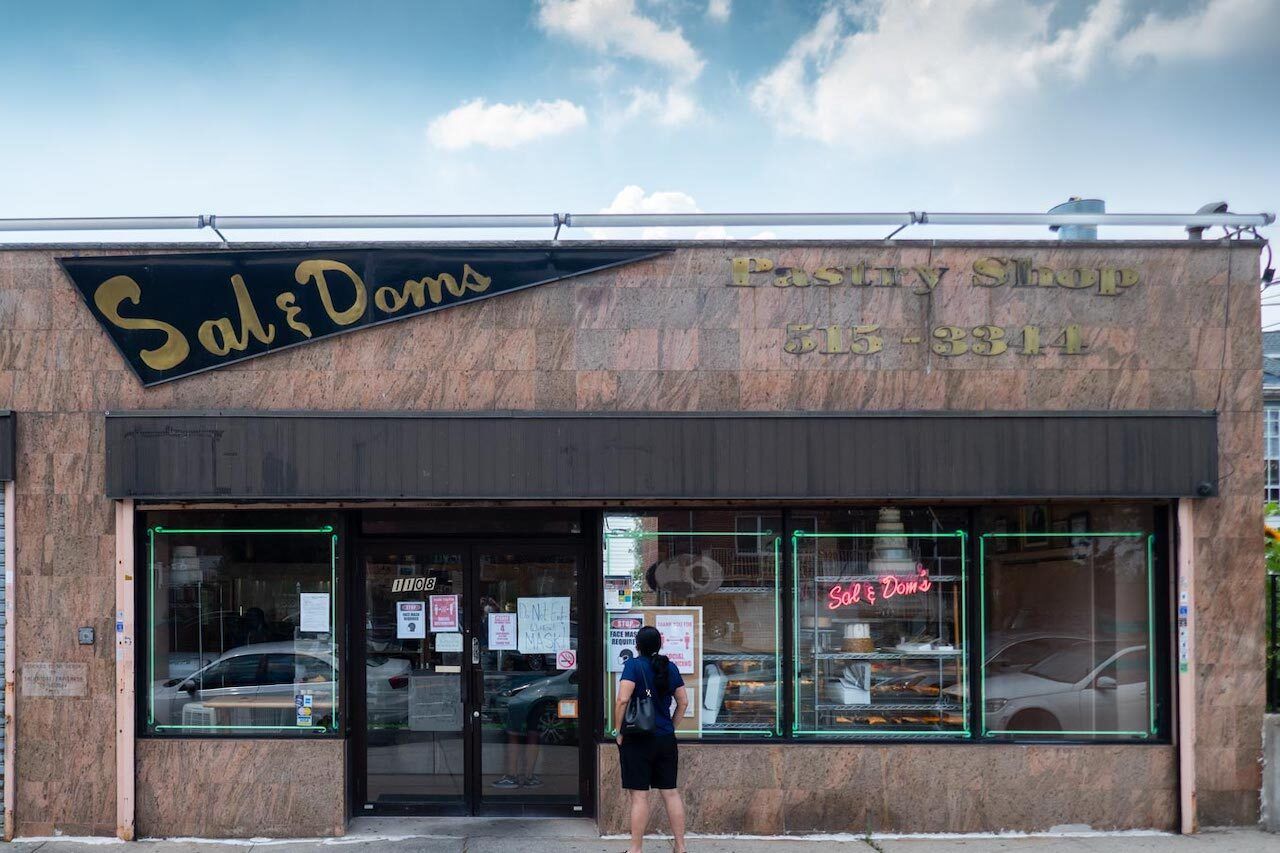 The northernmost bakery on this list, Sal & Dom’s is a local favorite in a part of the Bronx that feels more like Westchester County than New York City. It’s the only well-established Italian bakery in the neighborhood, and the shop ships nationwide as well.

The high plexiglass barrier between the staff and patrons helps keep everyone safe, but it doesn’t prevent you from enjoying the smell of fresh bread as you enter from the busy Allerton Avenue thoroughfare. Capacity restrictions and social distancing are strictly enforced, so don’t be surprised if you see a line outside. It moves quickly, though. Only one person per group is allowed inside. 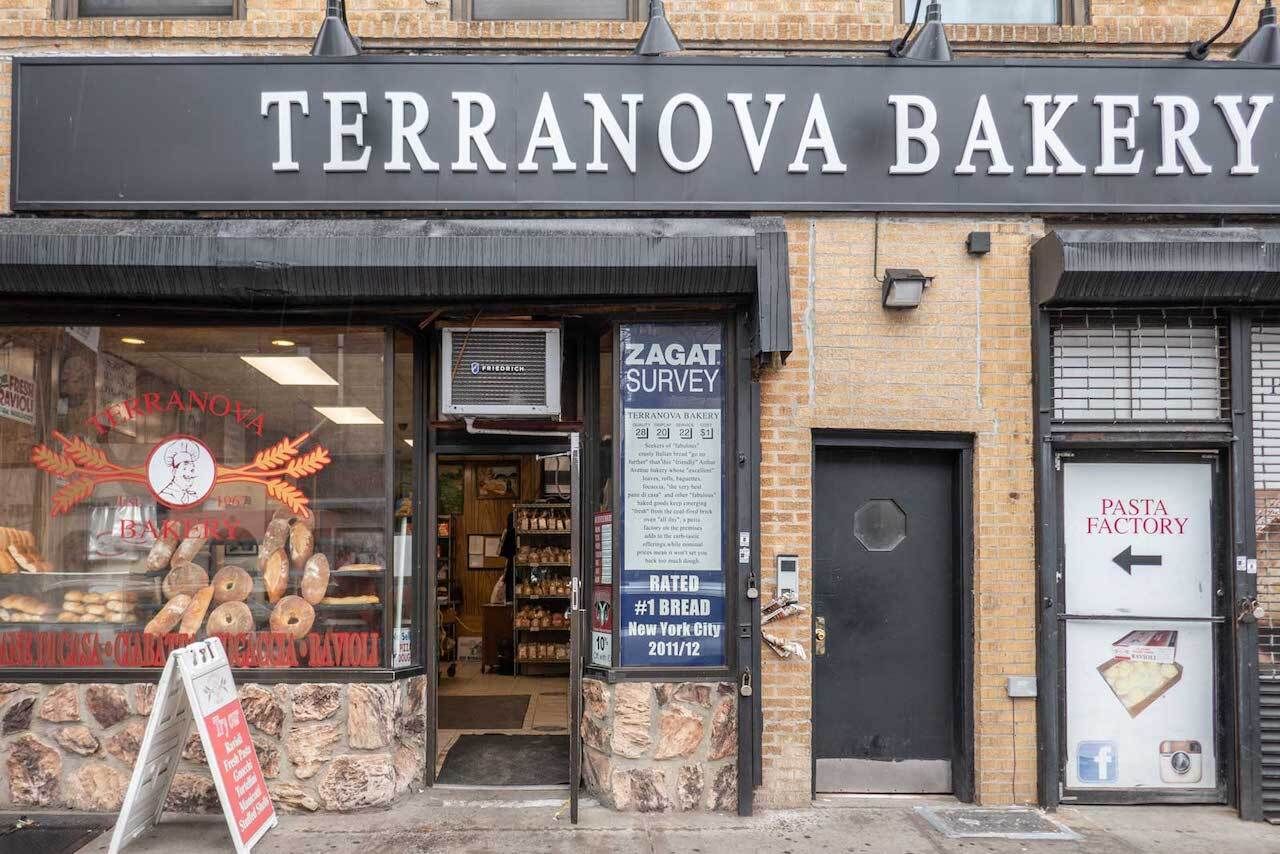 Terranova Bakery’s brick oven dates back to 1904, making it one of the oldest in the area. When you enter Terranova’s small 187th Street storefront, you’ll notice two refrigerators full of pasta for to-go sales on the right and varieties of fresh bread behind the counter on the left. The friendly staff are likely to greet you just as fast as the smell of fresh bread. Some of what the shop supplies to walk-in customers, local restaurants, and grocery stores is made behind the storefront, and the rest is made at a larger facility in Westchester County. You can also order from the bakery’s website. 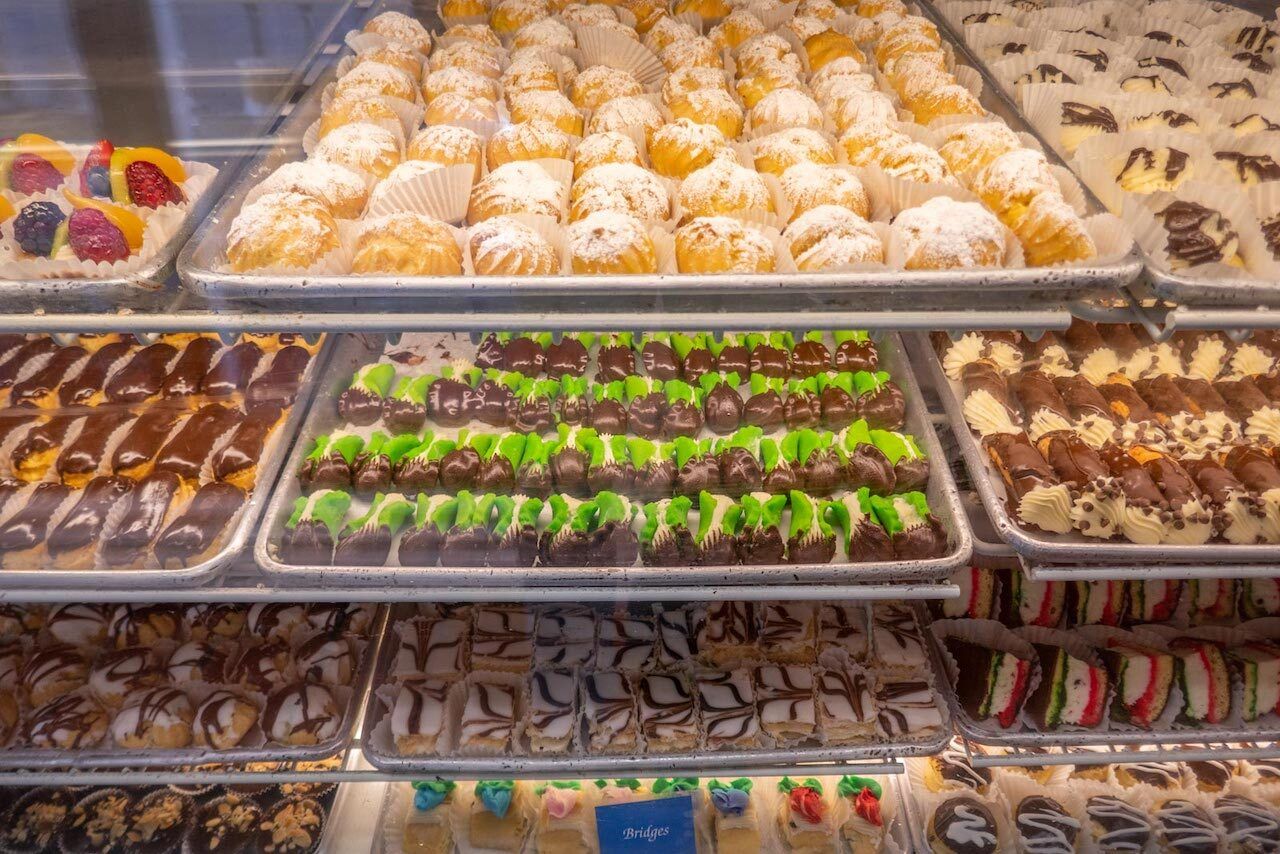 If you believe that the best Italian bakeries in The Bronx are all along Arthur Avenue or 187th Street, then you haven’t been to Zeppieri & Sons. This cash-only Pelham Bay neighborhood institution serves walk-ins 14 hours a day, seven days a week. It also supplies its famous pane di casa to local restaurants, including Orrico‘s across the street. Zeppieri & Sons is located under the elevated six train, making it the most conveniently located Italian bakery in The Bronx.

Although the bakery has seen a dip in business since the pandemic, the individual selections remain the same.

Restaurants + BarsHow COVID-19 Has Changed Little Italy Neighborhoods Across the US
Tagged
Dessert Restaurants + Bars New York, NY, United States
What did you think of this story?
Meh
Good
Awesome