If you do a quick search for the oldest restaurant in the world, you’ll probably come across a few of the same entries. Perhaps Sobrino de Botín will top the list — it’s a casual restaurant in Madrid that opened in 1725 and is well-known for it’s mention in a Hemingway novel. Dig a little deeper, and you may come across Stockholm‘s Zum Franziskaner, opened in 1421 (though it’s not in the original building).

While no one would deny that a restaurant opened in the 15th century is old, it’s not the oldest in the world. That honor belongs to Salzburg, Austria’s St. Peter Stiftskeller. It opened in 803 (yes, more than 1,200 years ago) and is in the same building as it as when founded by one of Charlemagne’s top religious scholars (which yes, kind of means Charlemagne was the first owner). The reason some people don’t consider it the oldest restaurant in the world is because it wasn’t accepting money for food when it first opened. It was tradition to serve food to religious travelers, who would often stay and help at the monastery while passing through. But if you define a restaurant as “a place that serves food to travelers,” well, St. Peter’s tops the list.

And there’s so much more hot pink than you’d expect.

I ate at St. Peter’s back in March and was shocked at the restaurant’s amazing transformation and balance of new styles and extremely, extremely old features. It’s divided into two restaurant concepts: ACTHUNDERT& DREI, which is the formal dining area inside most of the building, and PETER, which is the hipper spot with Mediterranean-inspired dishes. I ate at ACTHUNDERT& DREI but walked around all the areas and wow — to say I was surprised at what it looked like is a serious understatement.

Here’s what the world’s oldest restaurant actually looks like, plus tips on snagging a table at the Salzburg hot spot. Scroll to the end for the most mind-blowing parts. 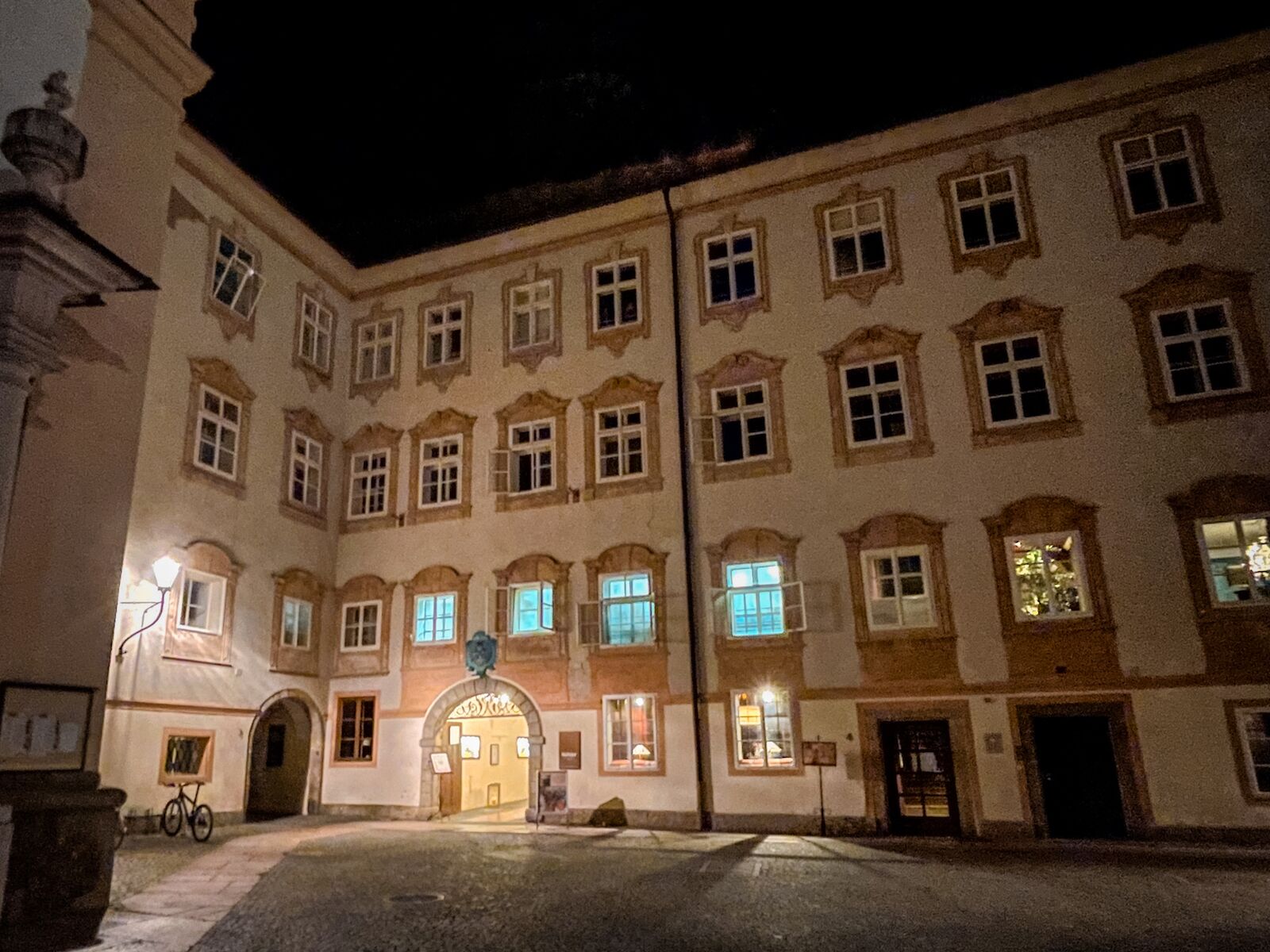 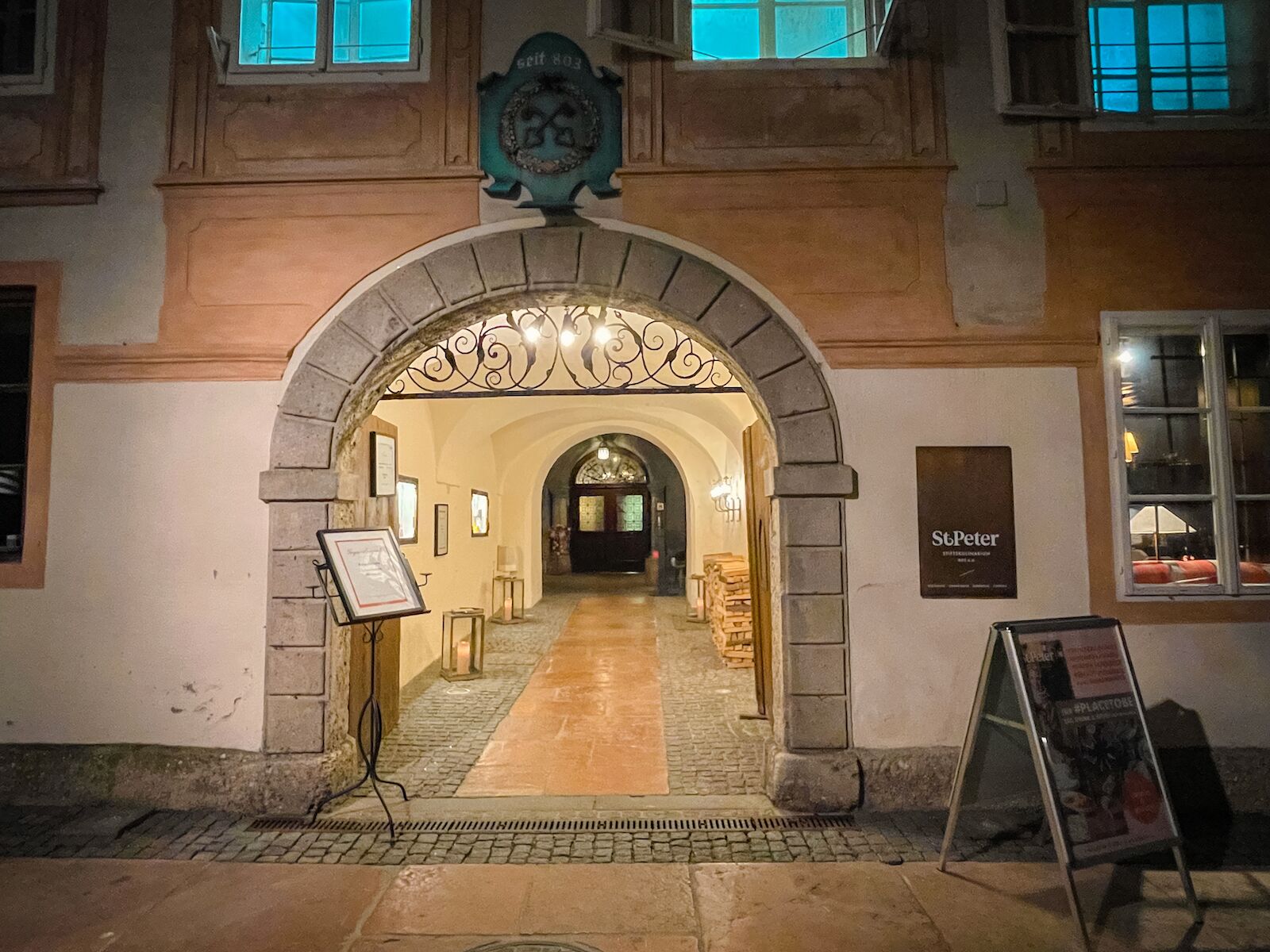 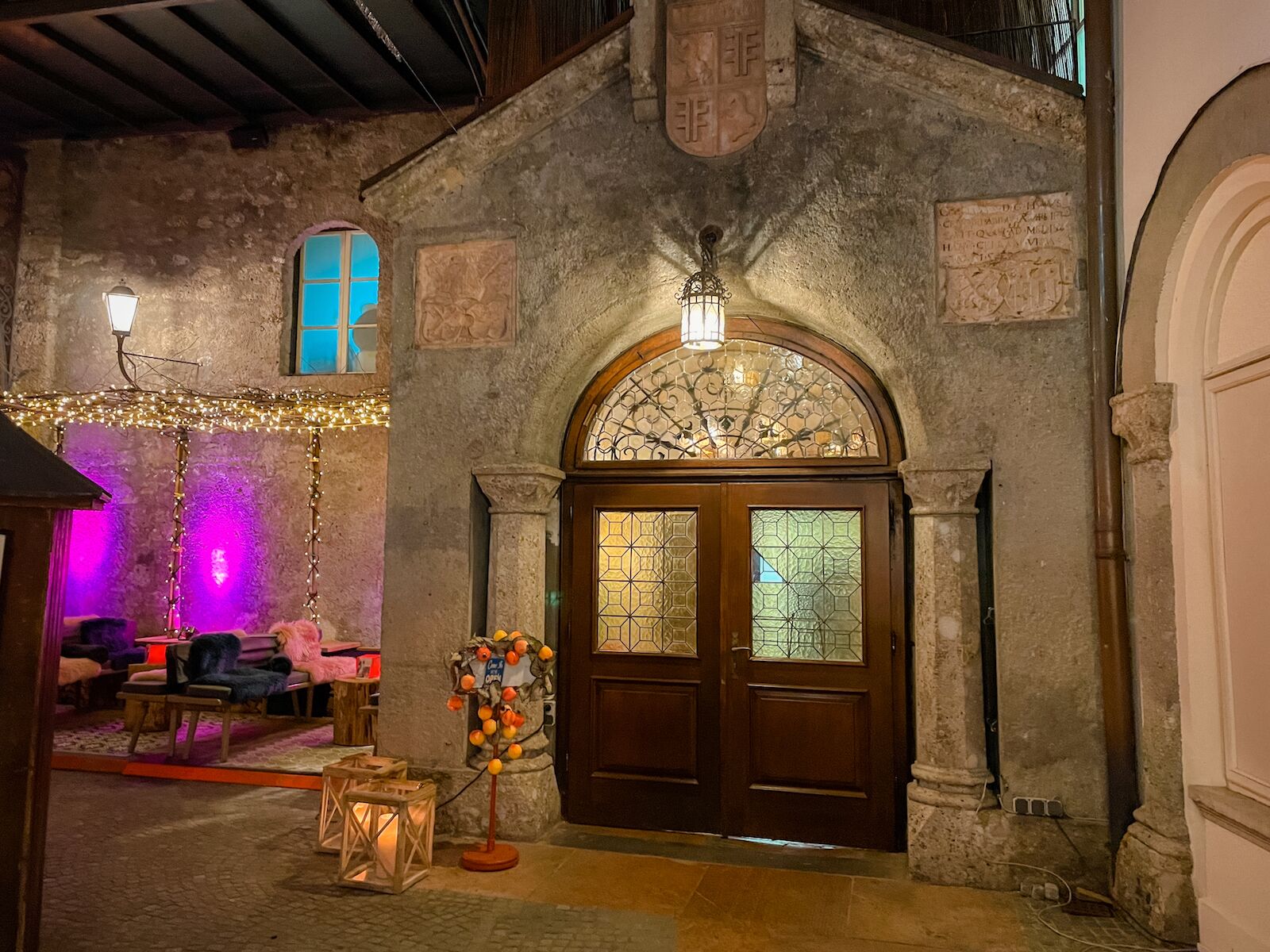 Save for the lounge area to the left, the original door to the restaurant still looks pretty authentic. Photo: Suzie Dundas

When you first walk into St. Peters, which has several rooms and different dining areas, it more or less looks how you’d expect the oldest restaurant in the world to look. There are original walls and wood carvings inspired by monks. 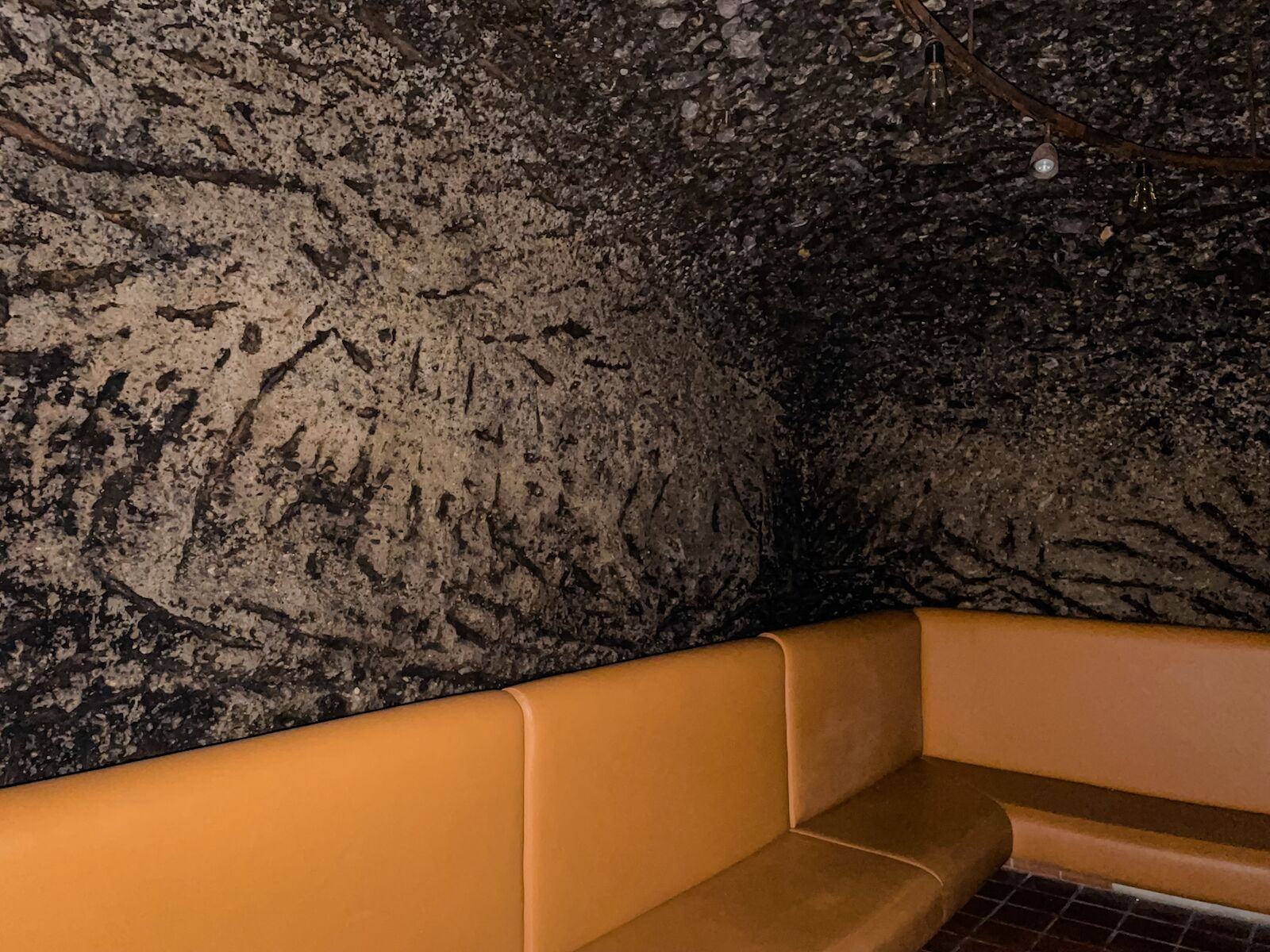 Except for the 1970s-style couches, this room is all original — the abbey was built against the side of the Mönchsberg mountain in the 600s, which you can see quite clearly here. Photo: Suzie Dundas 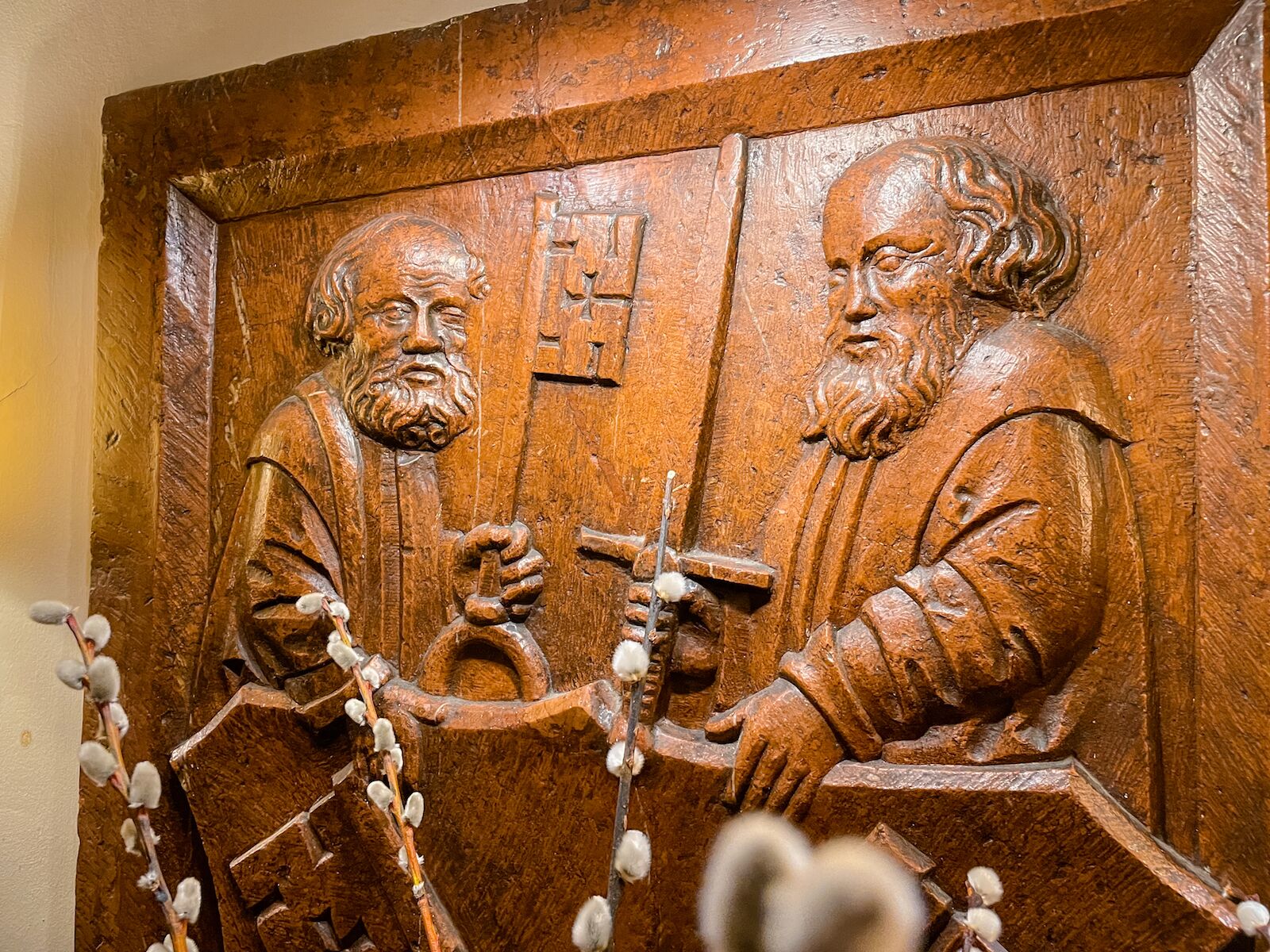 I wasn’t surprised to see that the world’s oldest restaurant had original carvings from the early days when the entire building was used for religious purposes. Photo: Suzie Dundas 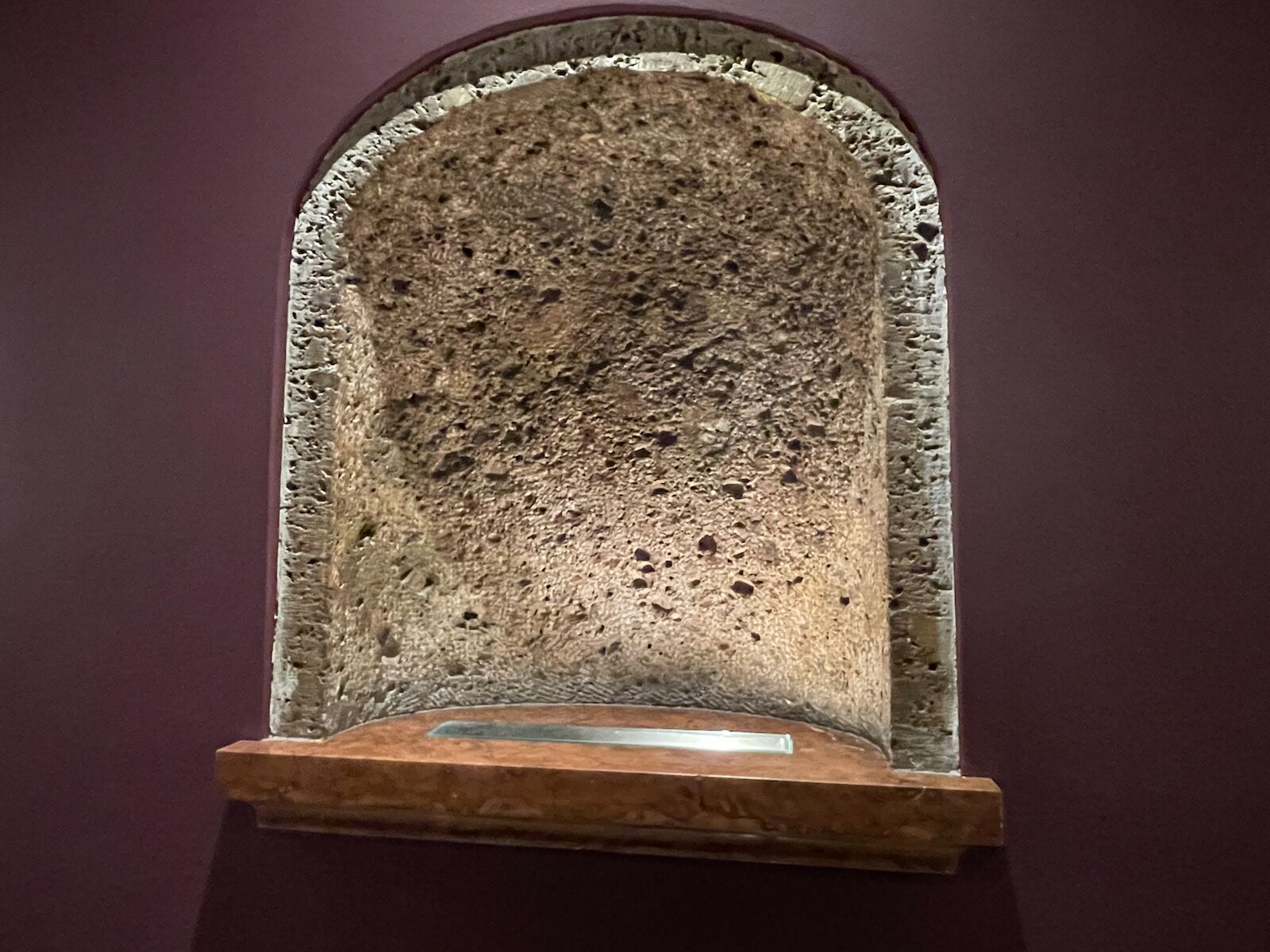 Even the “newer” sections of the building retain original details, like this display shelf with the abbey’s natural rock wall behind it. Photo: Suzie Dundas

Rooms inside the oldest restaurant in the world

Salzburg was founded in the year 696 CE (yes, with the establishment of St. Peter’s Abbey) and is on the site of an even older Roman establishment, so it’s history goes way back. It’s even divided into the “new” and “old” city; the old city is dominated by the Hohensalzburg Fortress.

But the reason most people know the town — and the reason so many tourists visit — is because it’s the birthplace of composer Wolfgang Amadeus Mozart. He was born in the old city in 1756 and the town’s annual Mozart Festival, which runs for six weeks every summer, brings nearly 200,000 attendees to Salzburg. So I wasn’t surprised to see that much of the decor in the oldest restaurant in the world looks like it’s straight from the 1700s and early 1800s. 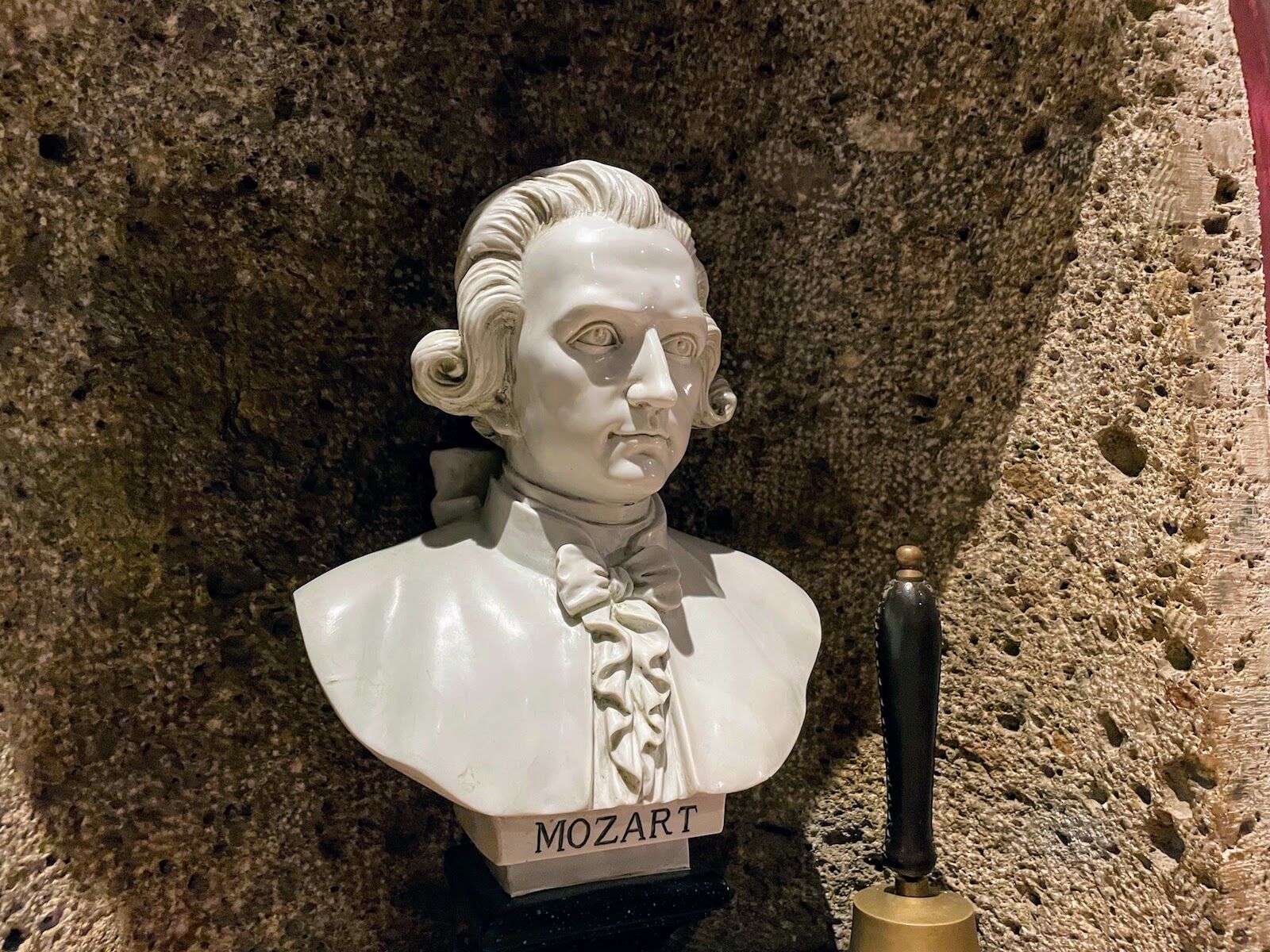 St. Peter’s is extremely popular during the Mozart Festival since it’s so close to many of the venues, so I wasn’t shocked to see a bust of Mozart in the hallway. Photo: Suzie Dundas 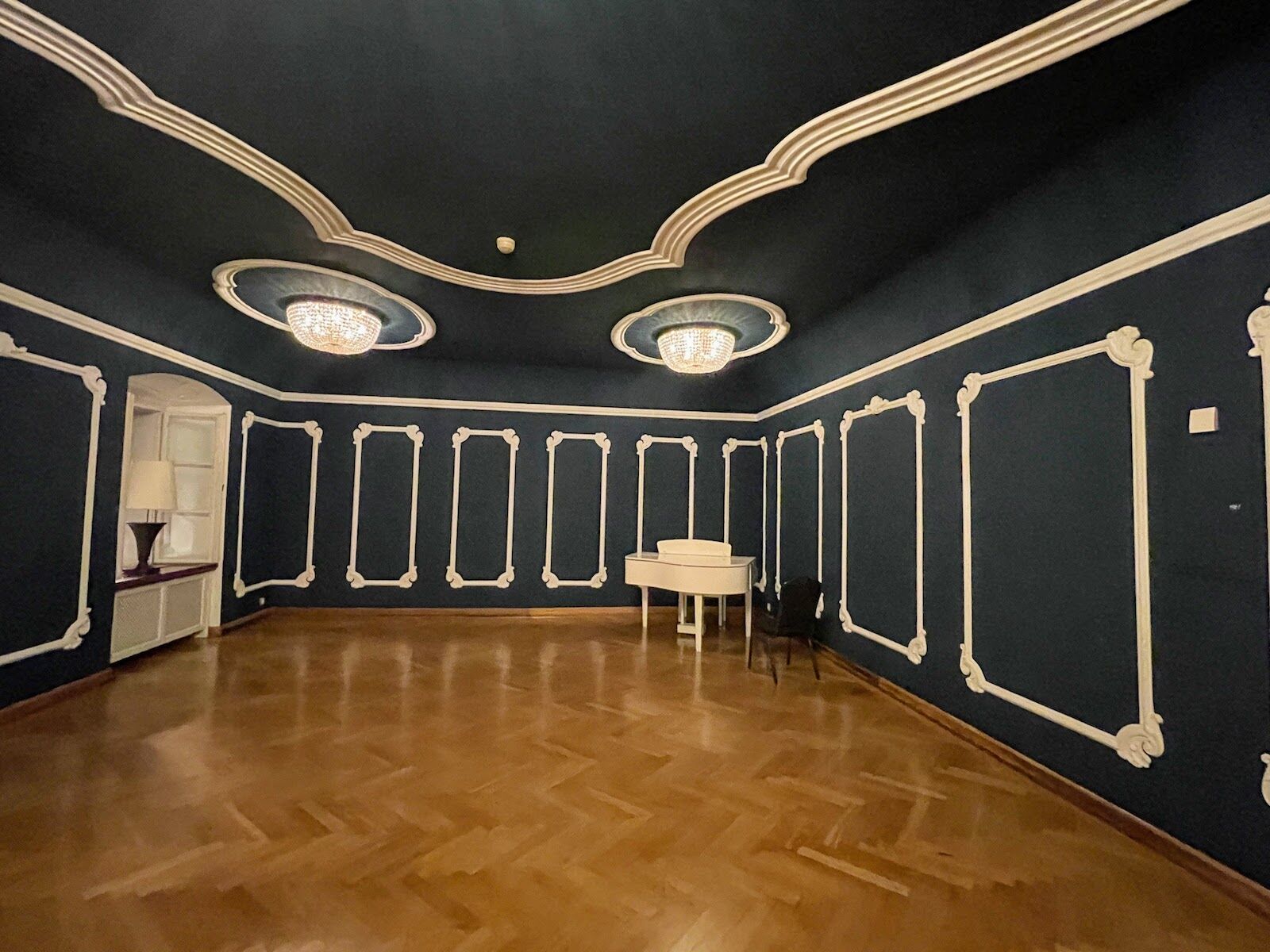 This room isn’t called the “Haydnsaal” in honor of Salzburg’s other famous composer, Joseph Haydn. It’s actually named for his brother, Michael Haydn, who lived in this room when it was still a monestary and led the choir. It’s now a private dining space.
Photo: Suzie Dundas 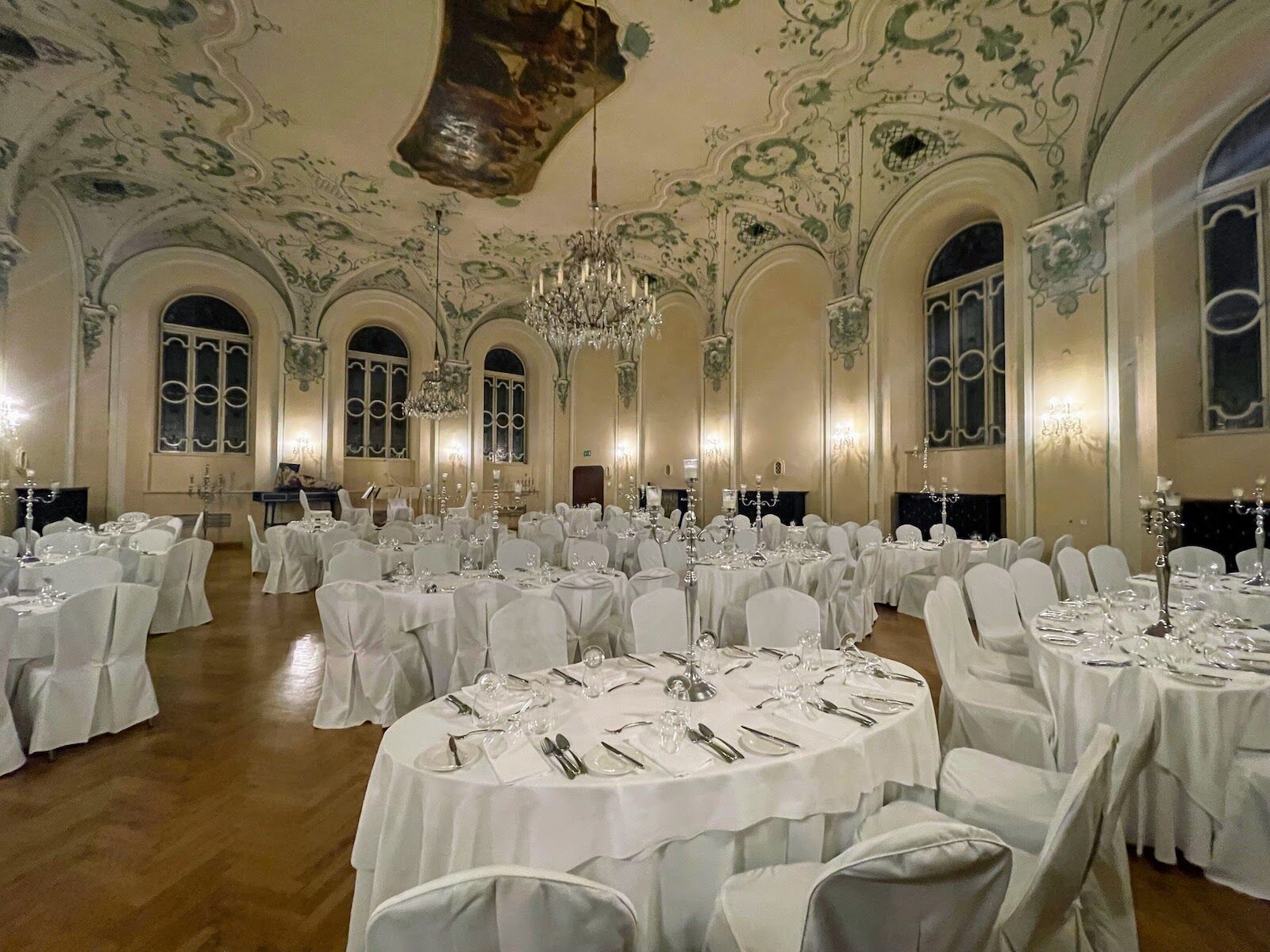 The Barocksaal room looks straight out of a period piece (though it actually dates to the early 1900s). It’s where the restaurant hosts its Mozart Dinner Series events and looks like it belongs in a Baroque-style castle. Photo: Suzie Dundas 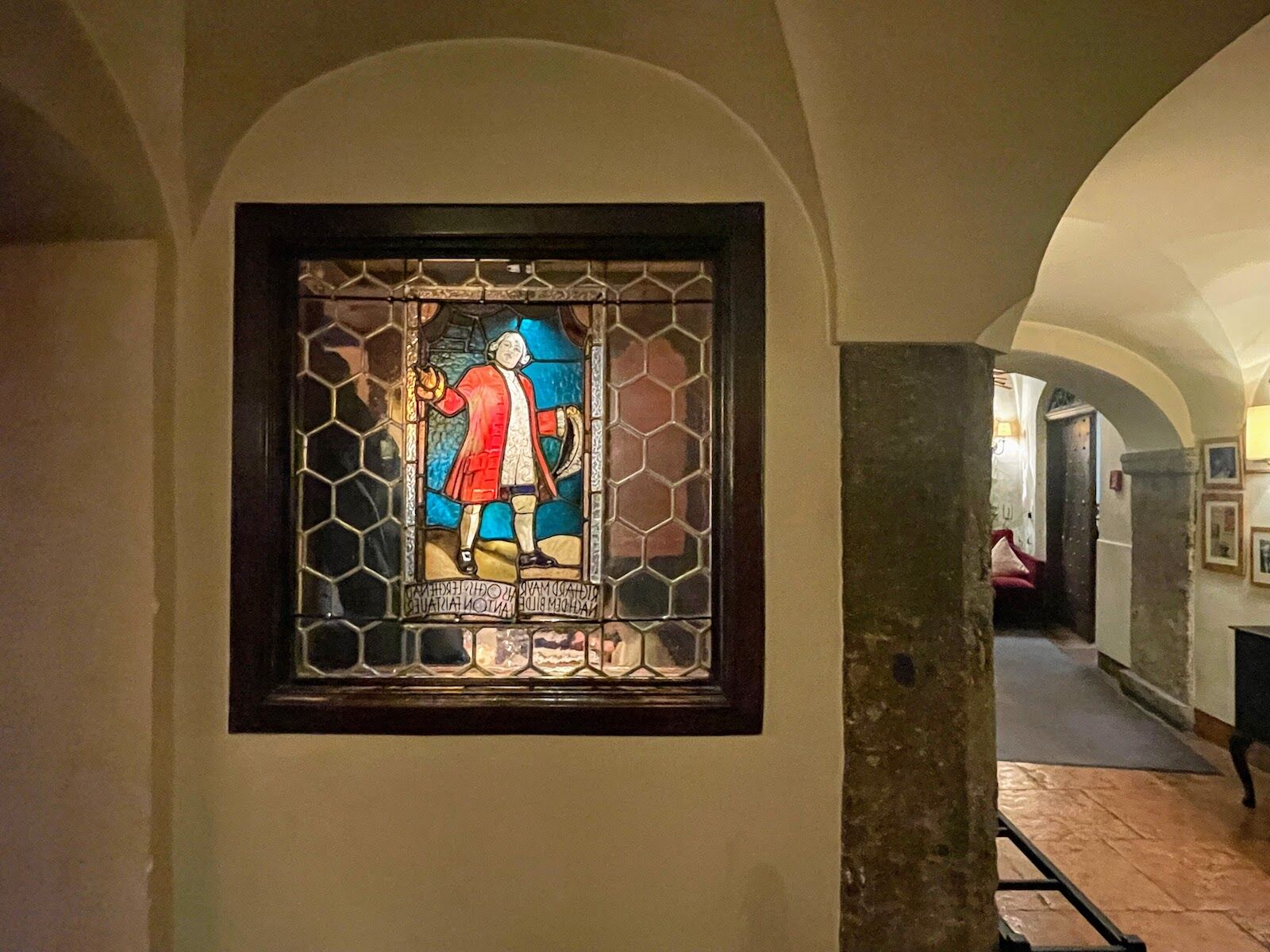 Surprise, surprise: it’s your boy Mozart, in full color on the lower floor. Absolutely what I’d expect to see at a high-end restaurant in Salzburg. Photo: Suzie Dundas 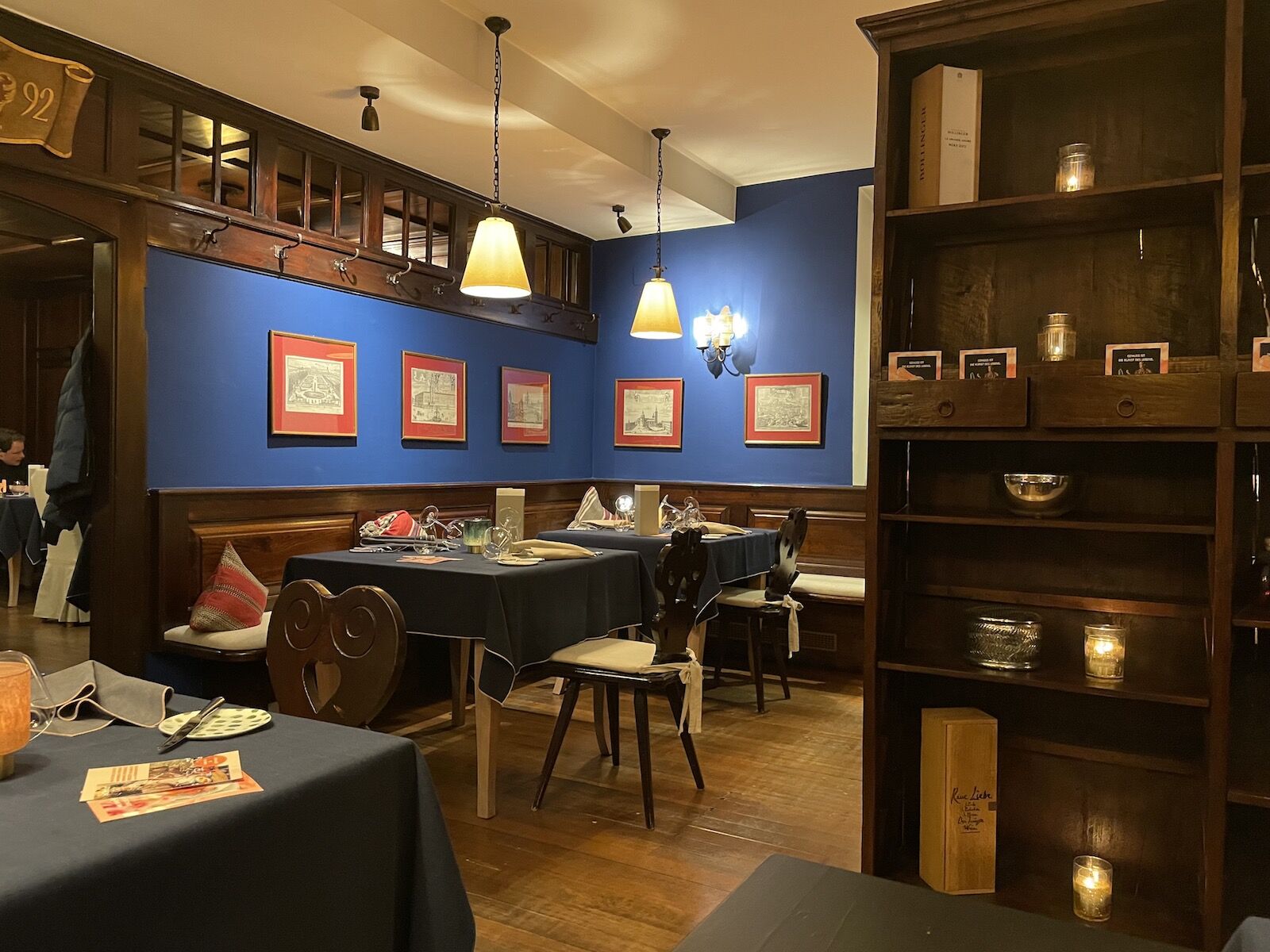 This was the view from my table at St. Peter’s. While it certainly doesn’t date from the early days, it looks like it was more or less designed in the early 1800s. Photo: Suzie Dundas 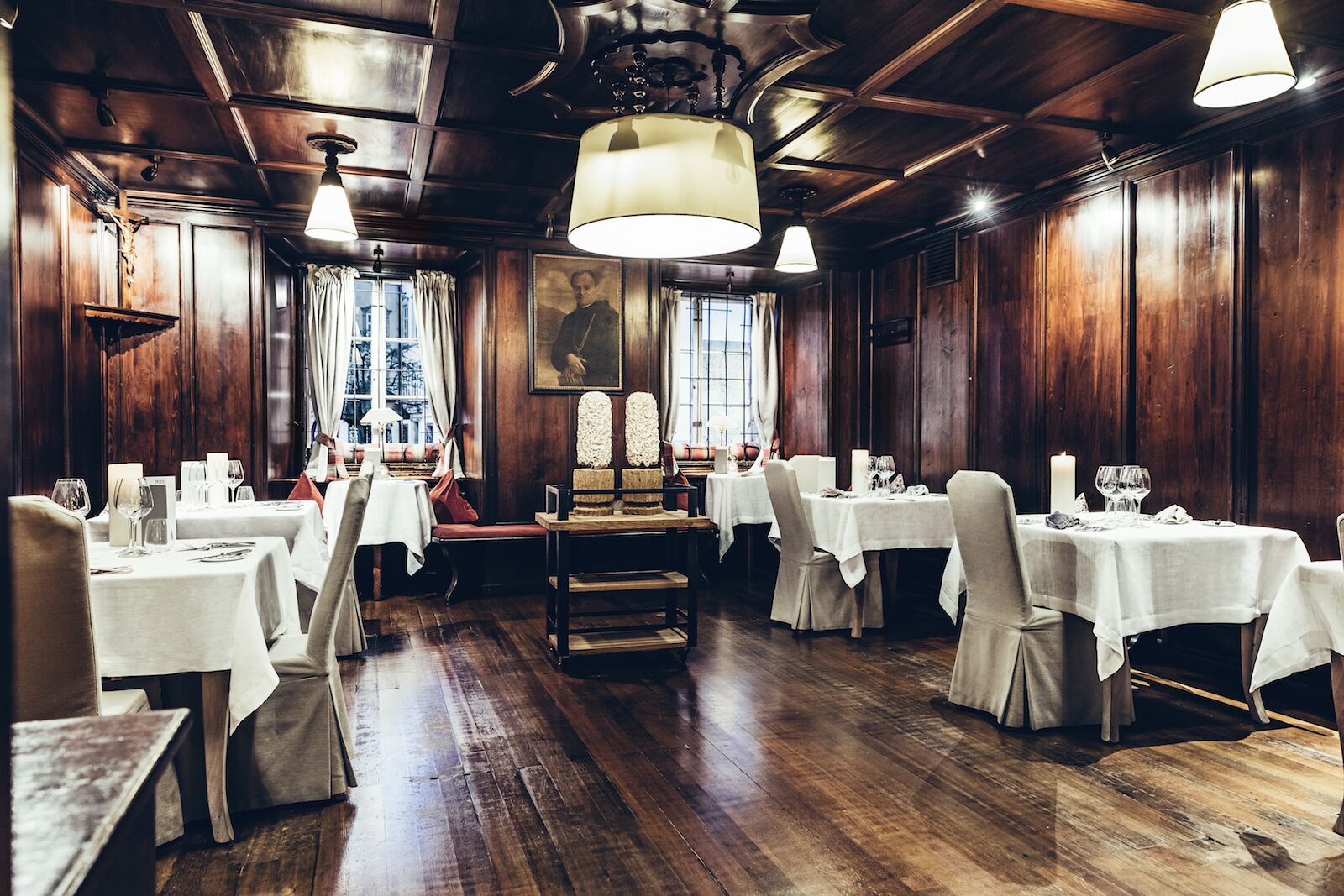 Well, this looks like an old restaurant, especially thanks to the monk photo and original wood paneling and flooring. Photo: St. Peter Stiftskulinarium Salzburg/Anja Koppitsch Photography 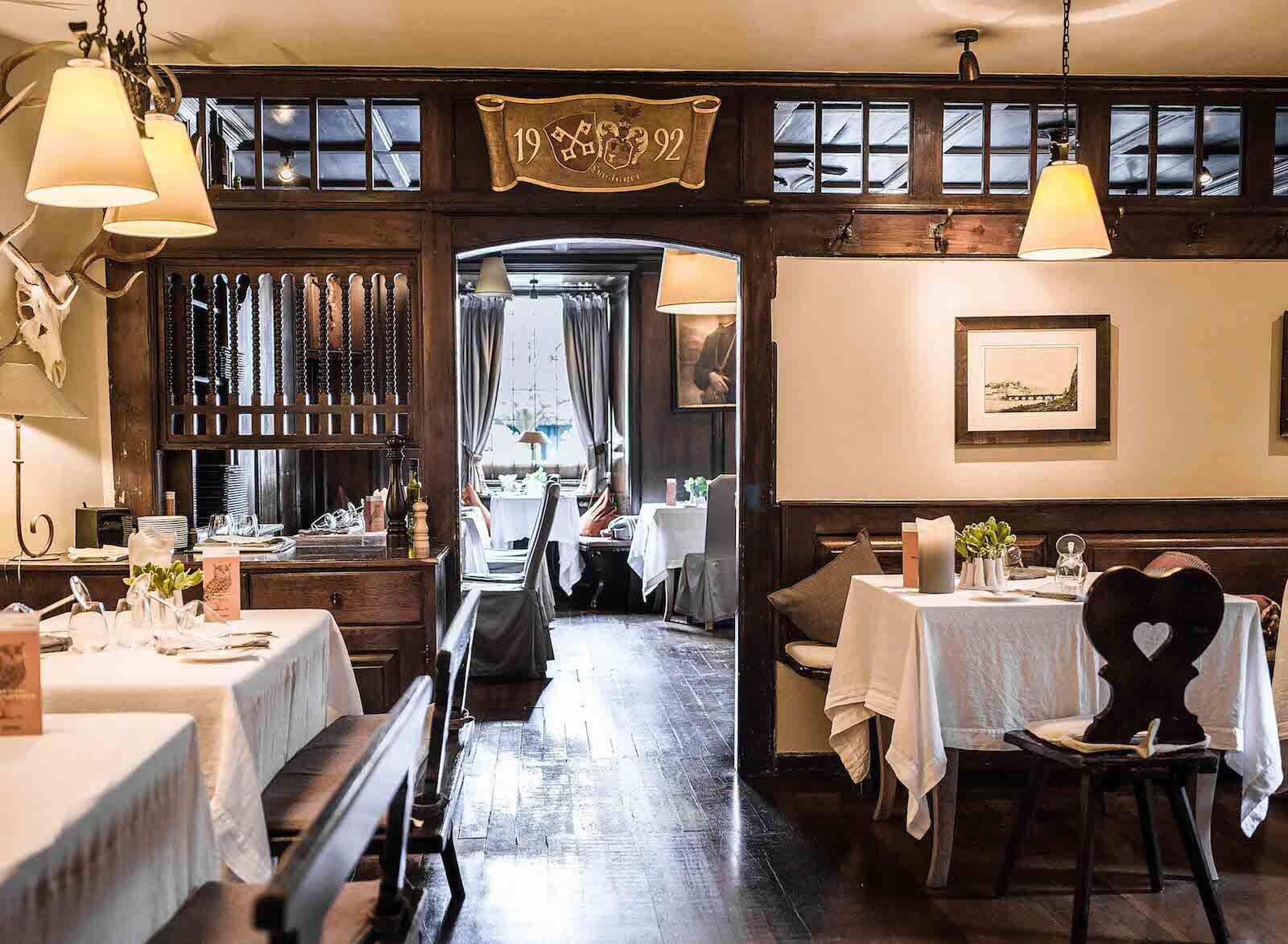 Aside from some very minor details like modern succulents and a mounted skull, the Prälatenstube room looks pretty true to the period. Photo: St. Peter Stiftskulinarium Salzburg/Marcus Rieder

The food at the oldest restaurant in the world

St. Peter’s truly did an amazing job of blending traditional cuisine with modern culinary styles and it was one of the best meals I had in Austria. The menu is fairly traditional, with a great wine selection and many local Austrian beers. 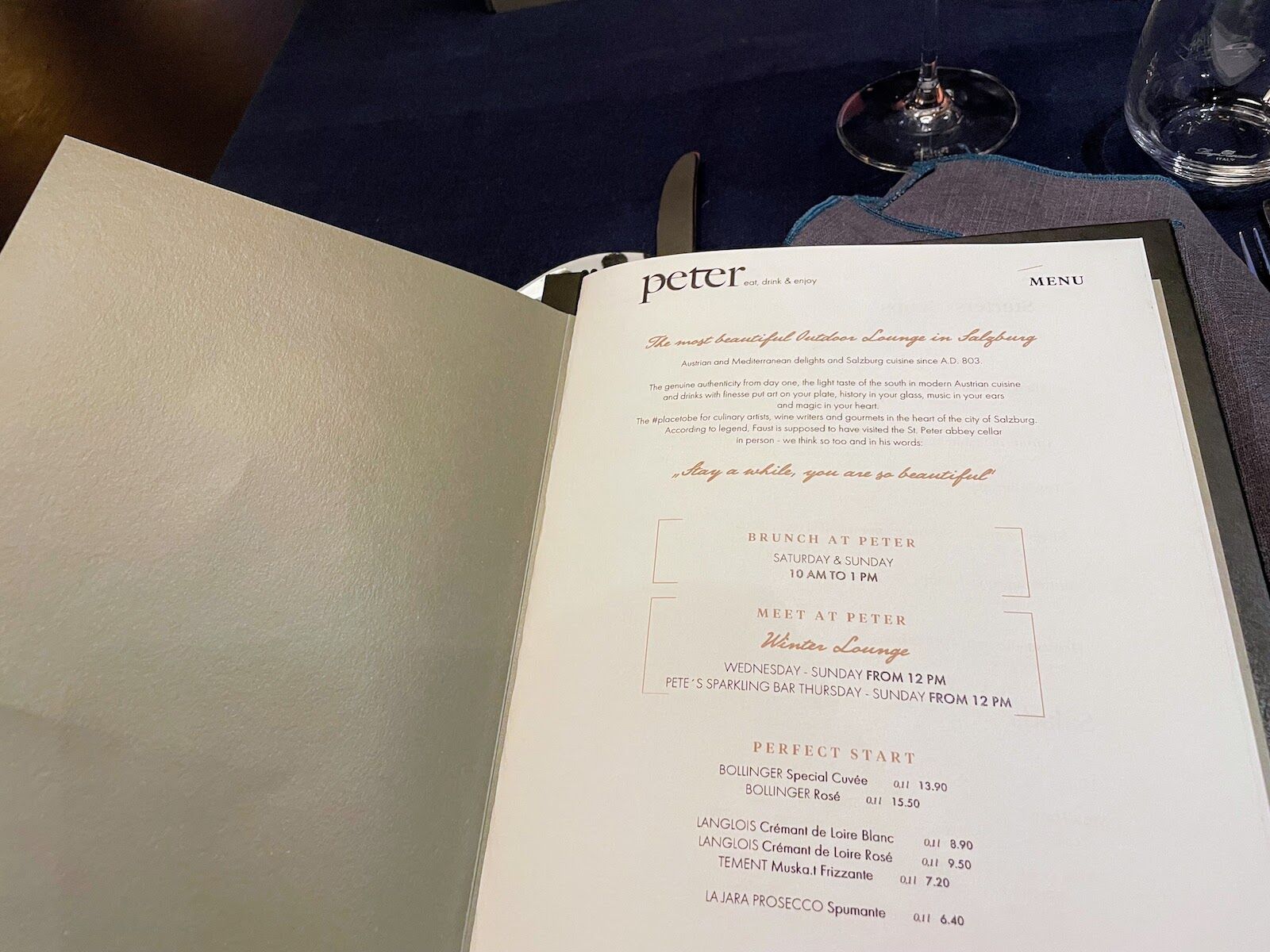 The menu is big, both literally and figuratively. It covered most of my side of the table when I had it open. Much of it is devoted to a lengthy (and well-curated) wine list. Photo: Suzie Dundas 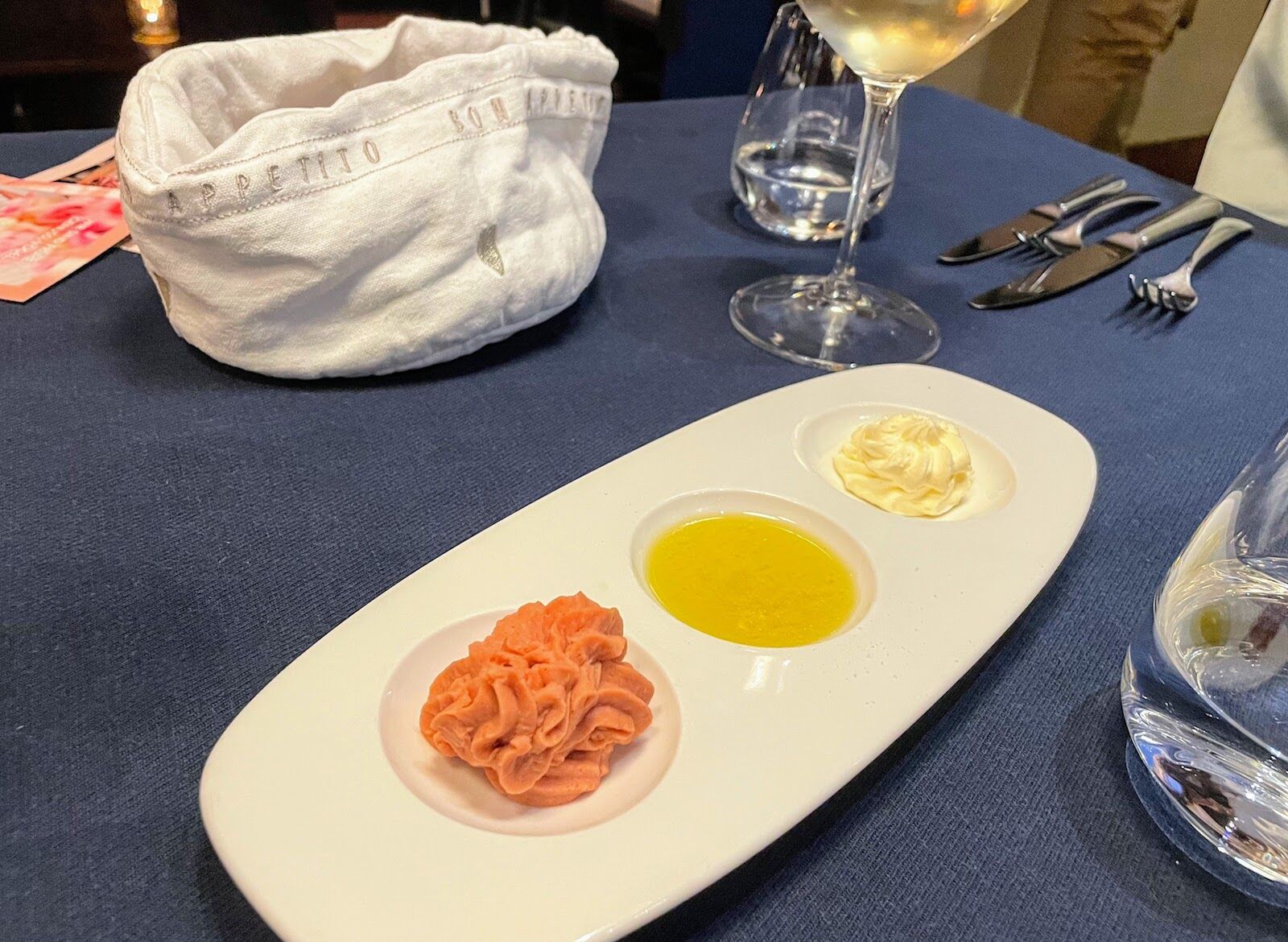 I started off with house-made bread and three dips: olive oil, hummus, and garlic butter, along with a glass of sparkling wine. Photo: Suzie Dundas 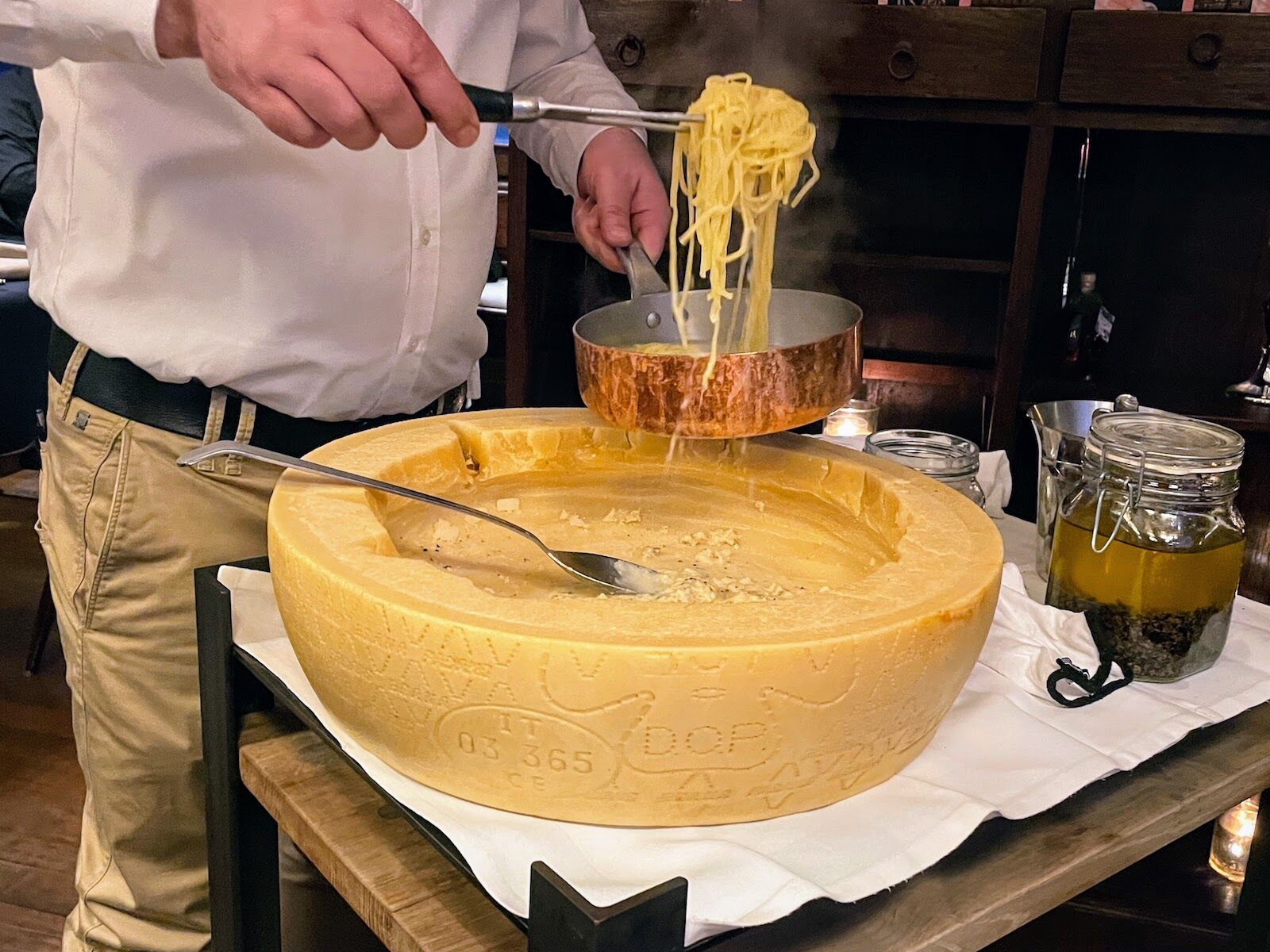 I ordered the homemade tagliolini with black winter truffle and Grana Padano cheese. And oh my goodness: the pasta was *literally* cooked inside a giant cheese wheel at the side of my table. Photo: Suzie Dundas 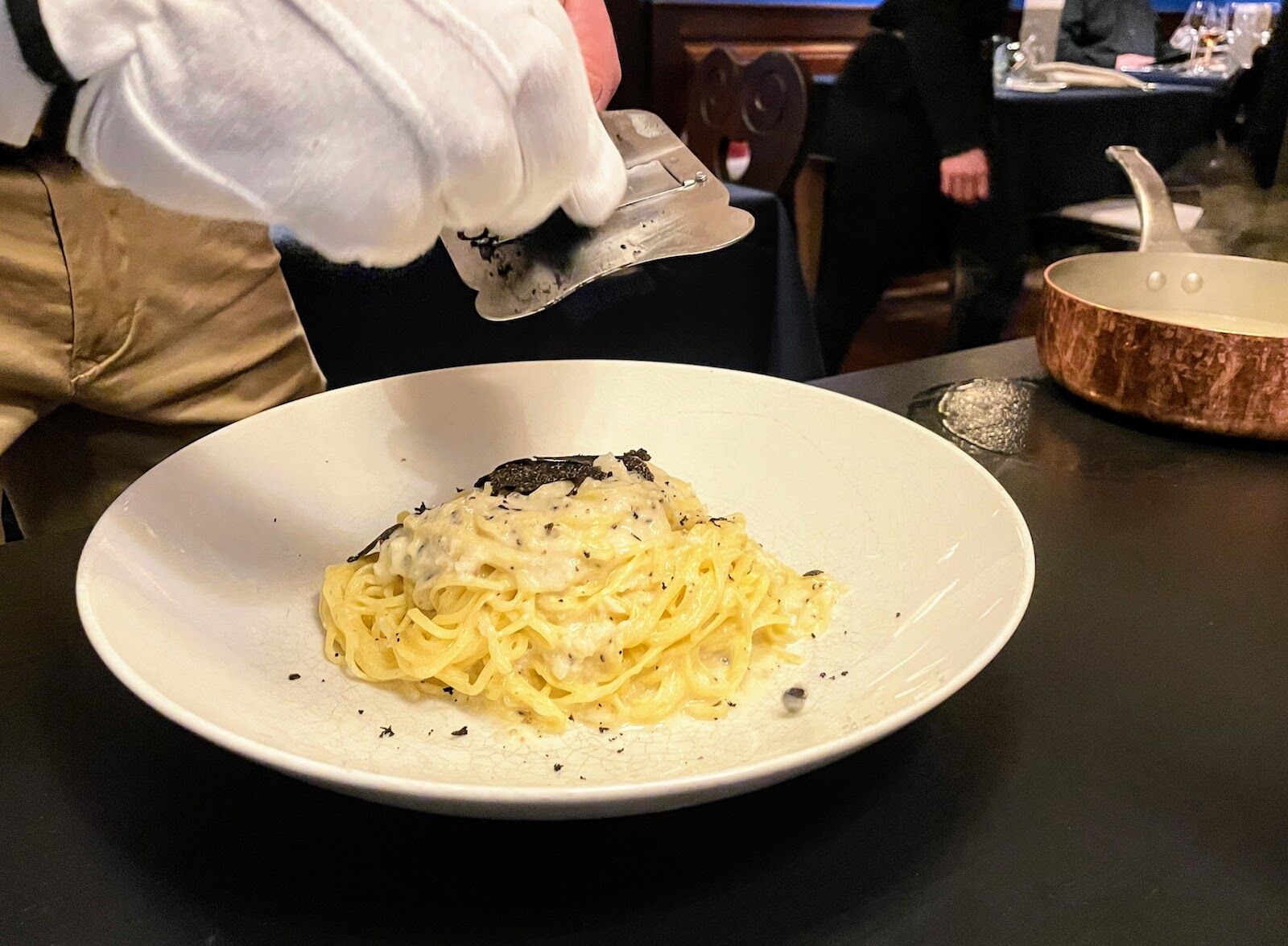 They finished it off with some freshly grated black truffle, which was incredibly flavorful. Photo: Suzie Dundas 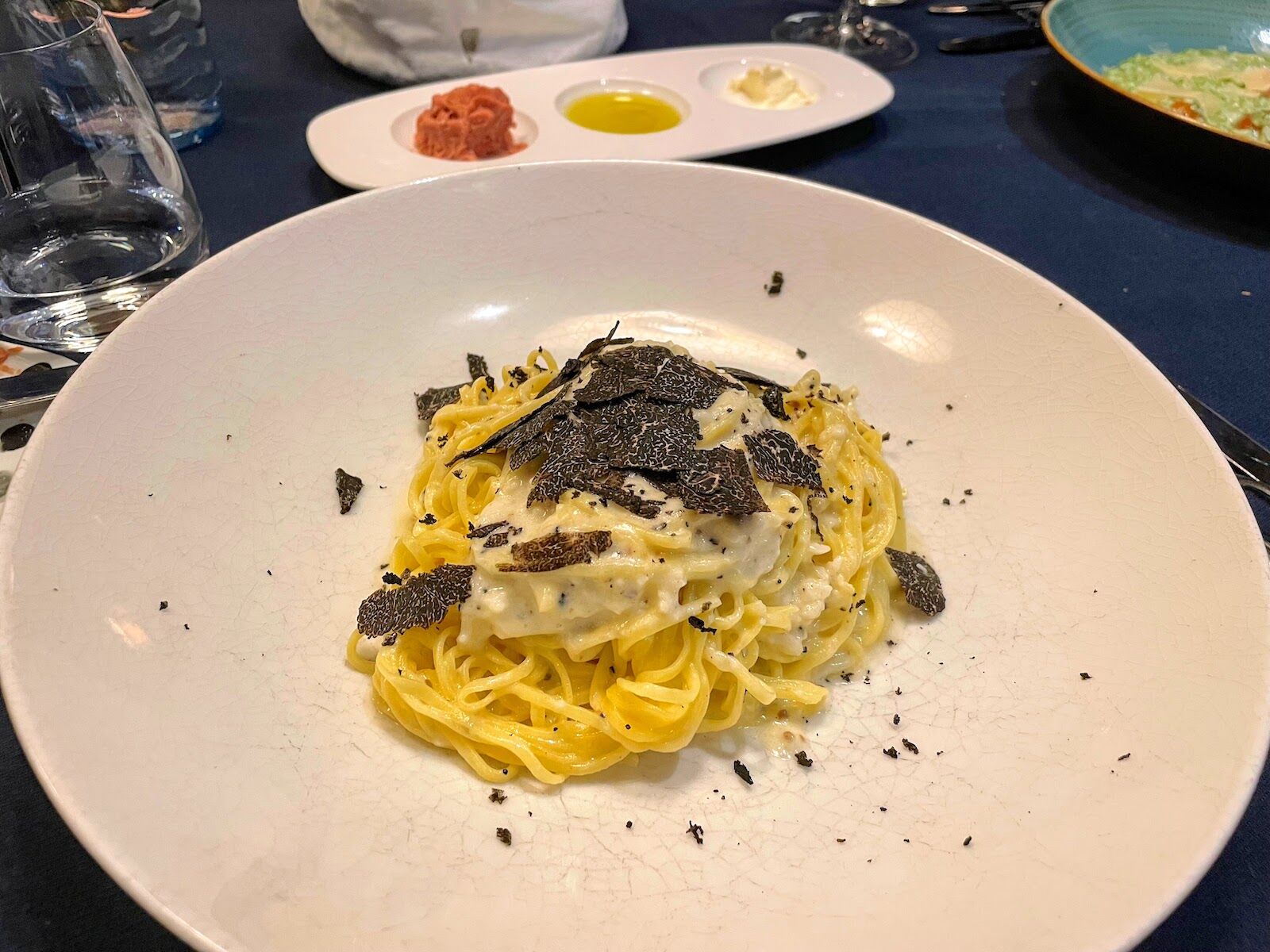 It was beyond delicious. Photo: Suzie Dundas 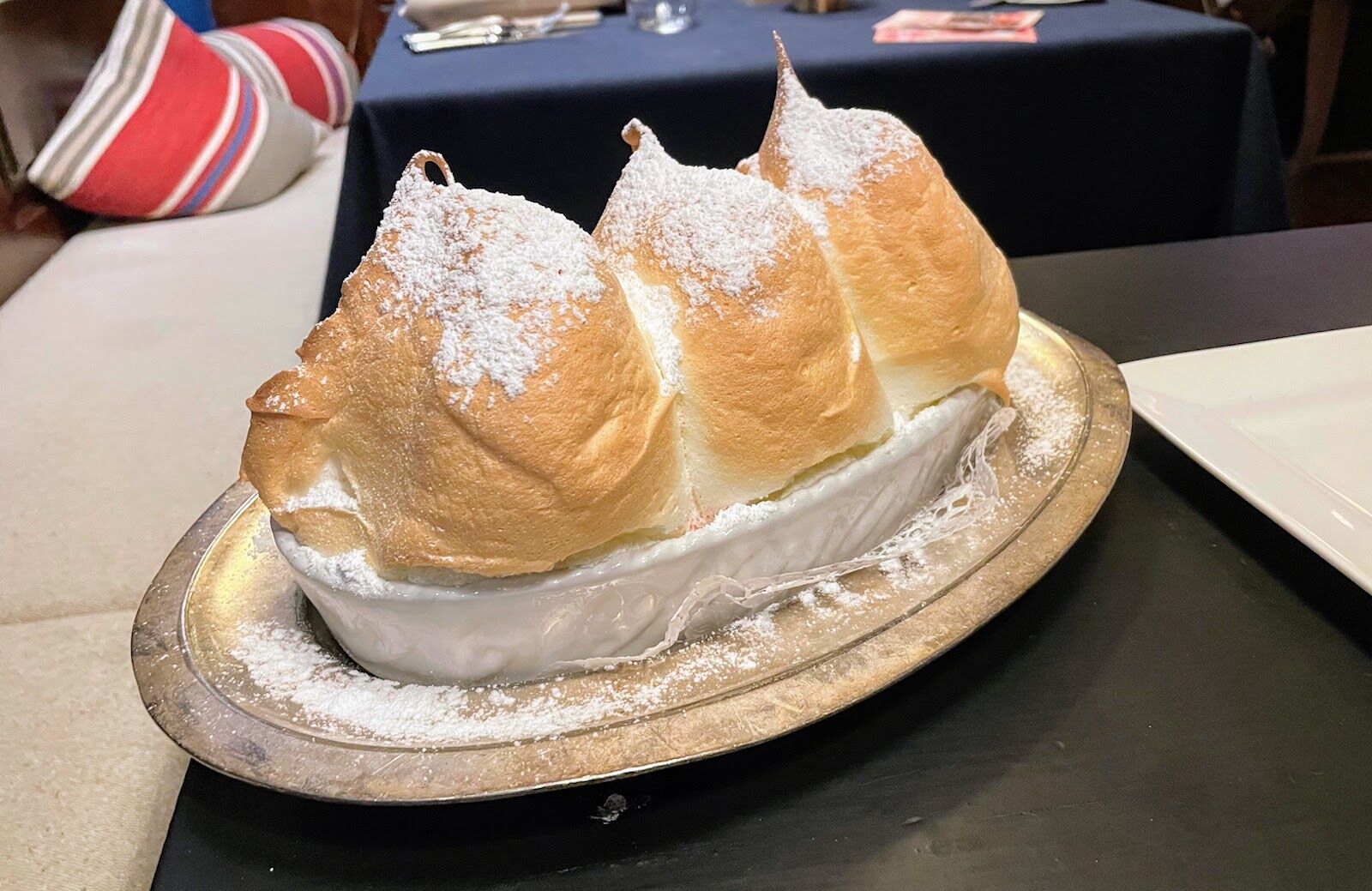 And for dessert? None other than the city’s most famous dish: Salzburger Nockerl, served with lingonberry cream. It’s an impossibly fluffy soufflé-type dessert, made with only three ingredients: egg yolk, flour, and sugar (and sometimes vanilla). Photo: Suzie Dundas

The rest of the space

After dinner, I walked around the oldest restaurant in the world a bit more, and that’s when things started getting…unexpected. 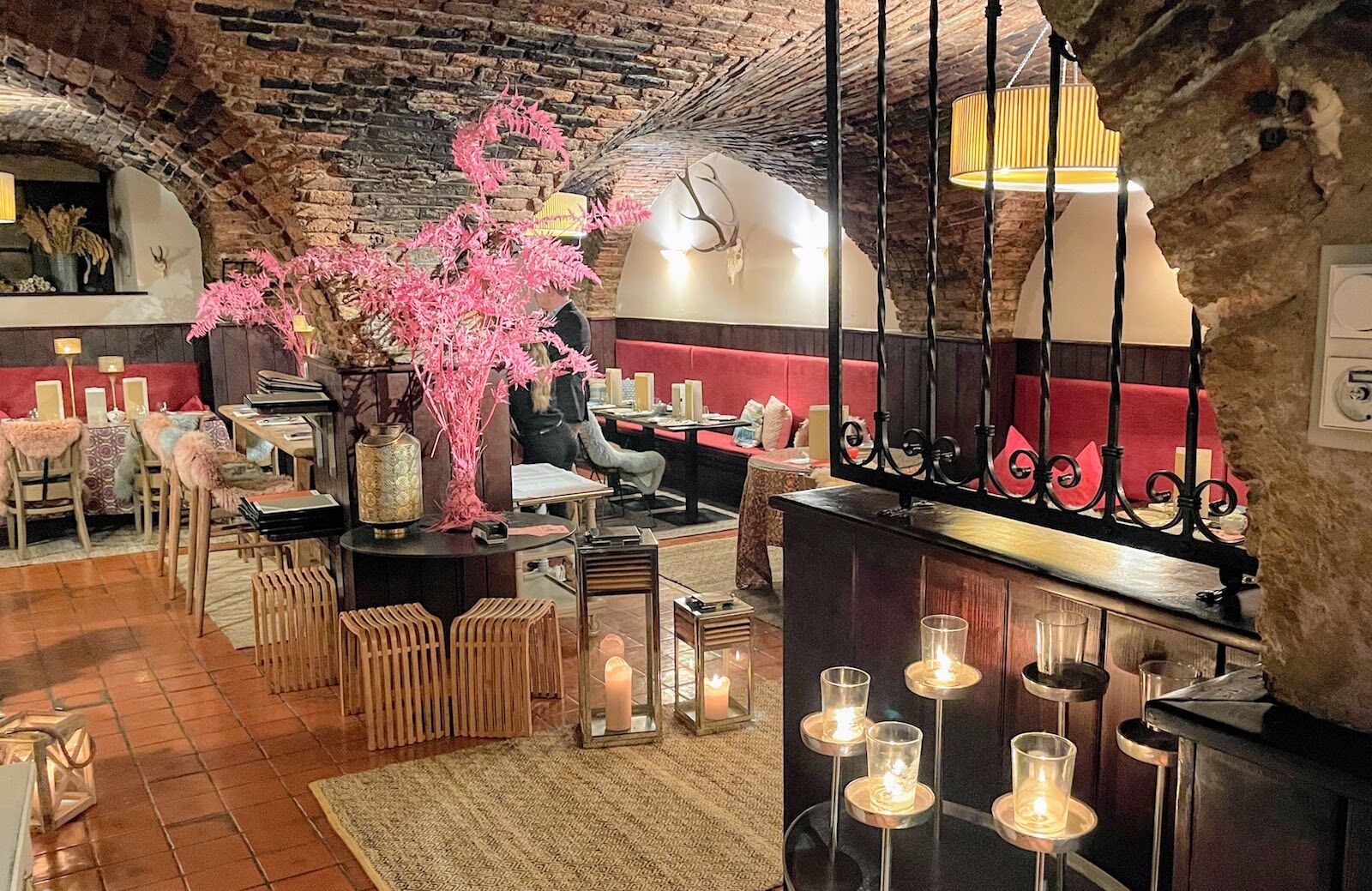 This room is the Richardstube, and it was the monastery’s wine cellar 1,200 years ago. It’s an awesome room but I was surprised to see hip modern elements like bright pink, faux-flowers and furry seat covers. Photo: Suzie Dundas 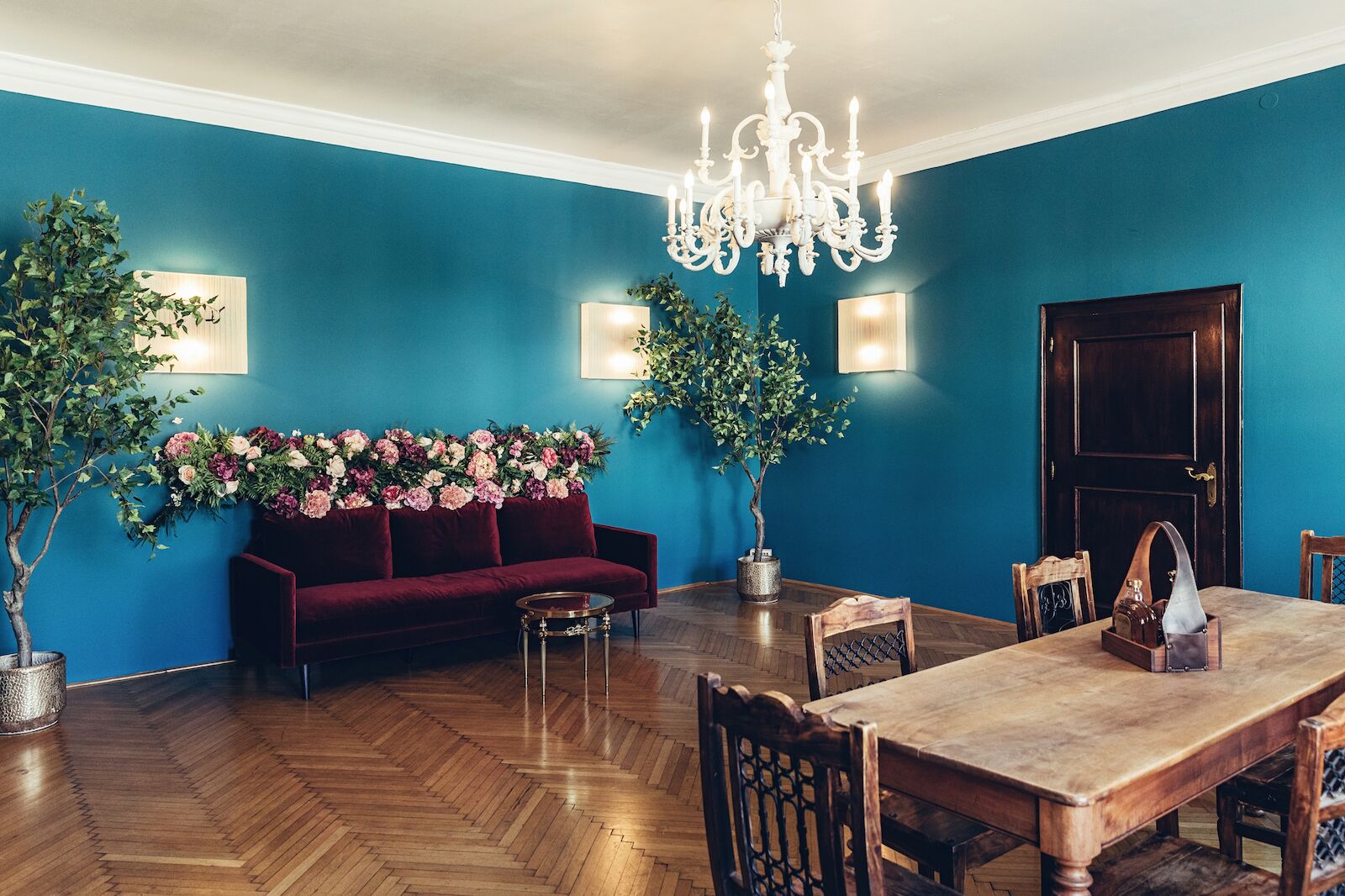 Okay, I have no idea where the “Virgil Salon” fell within my expectations. It has the bones of a historic building, but the huge bunches of colorful flowers and velvet couch give it a cool, hipster-vintage vibe. Photo: St. Peter Stiftskulinarium/Anja Koppitsch Photography 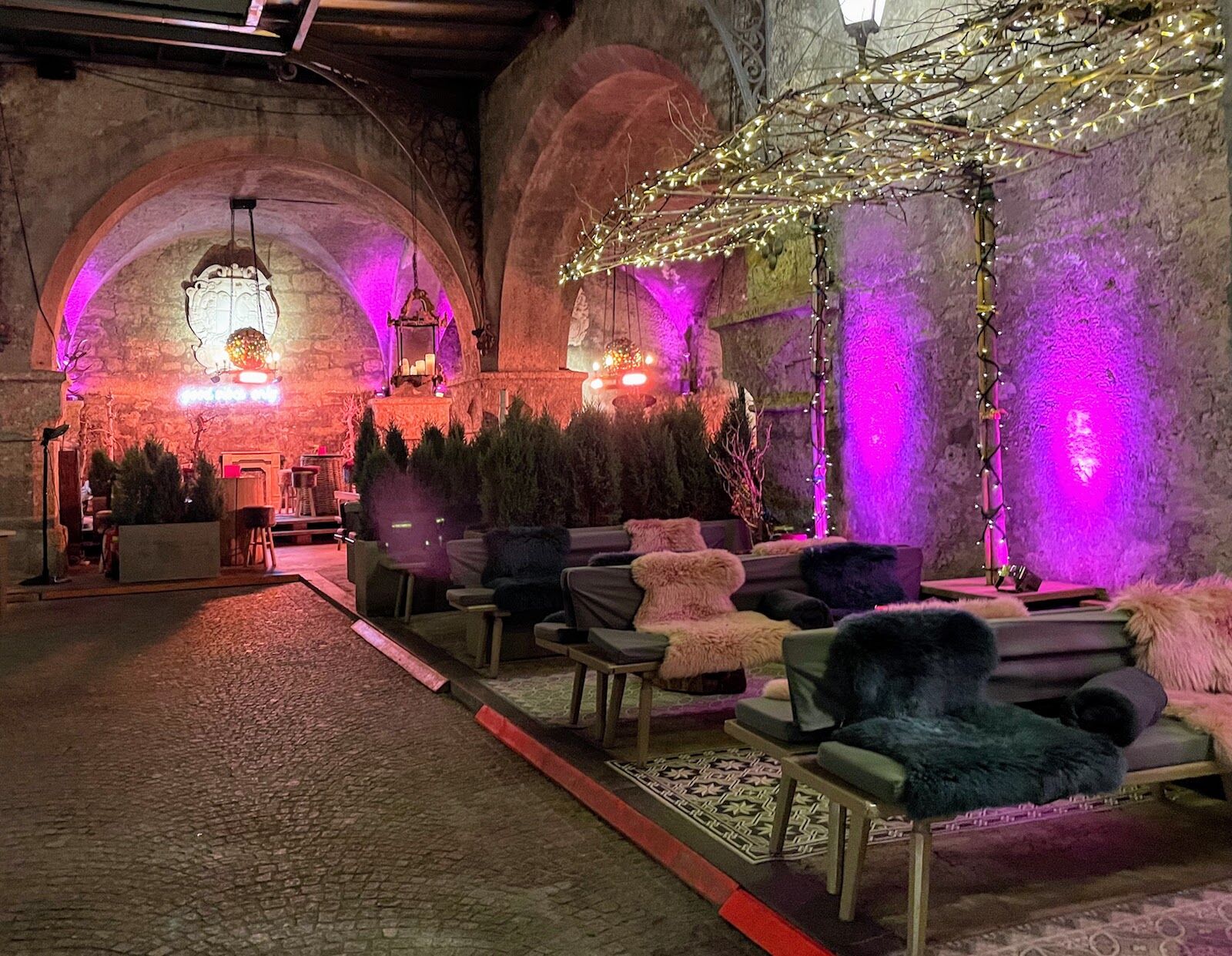 I was really into the funky nightlife vibes of the foyer, but gotta admit, I did not expect so much neon pink in such an old building. This lounge area (called the Willibaldarkaden) was once the entry courtyard for monks and religious travelers, but now, it’s a hip spot for outdoor dining and brunches with a fondue bar and champagne bar. Oh, and it turns into a hot mulled wine stand around Christmas. Photo: Suzie Dundas 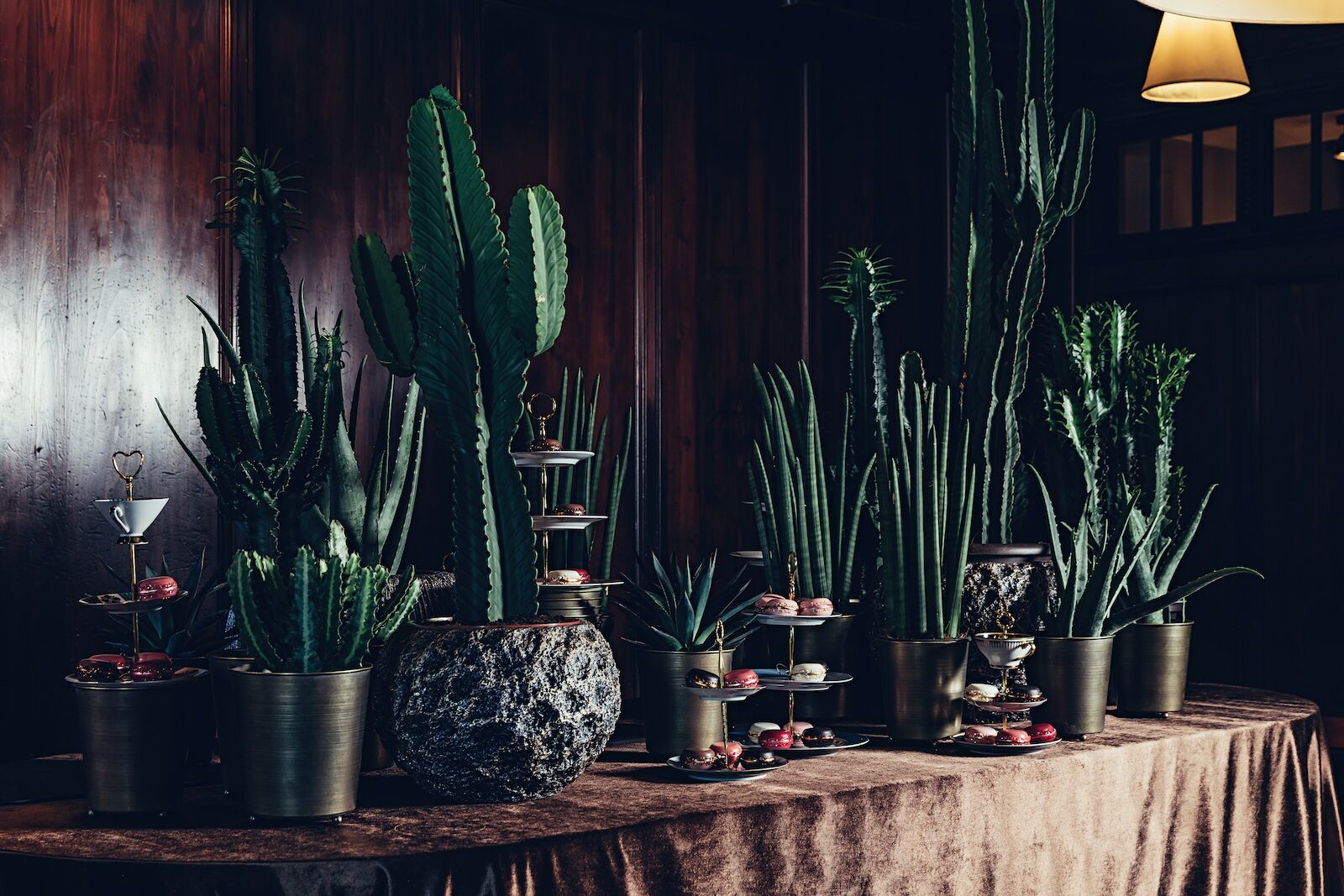 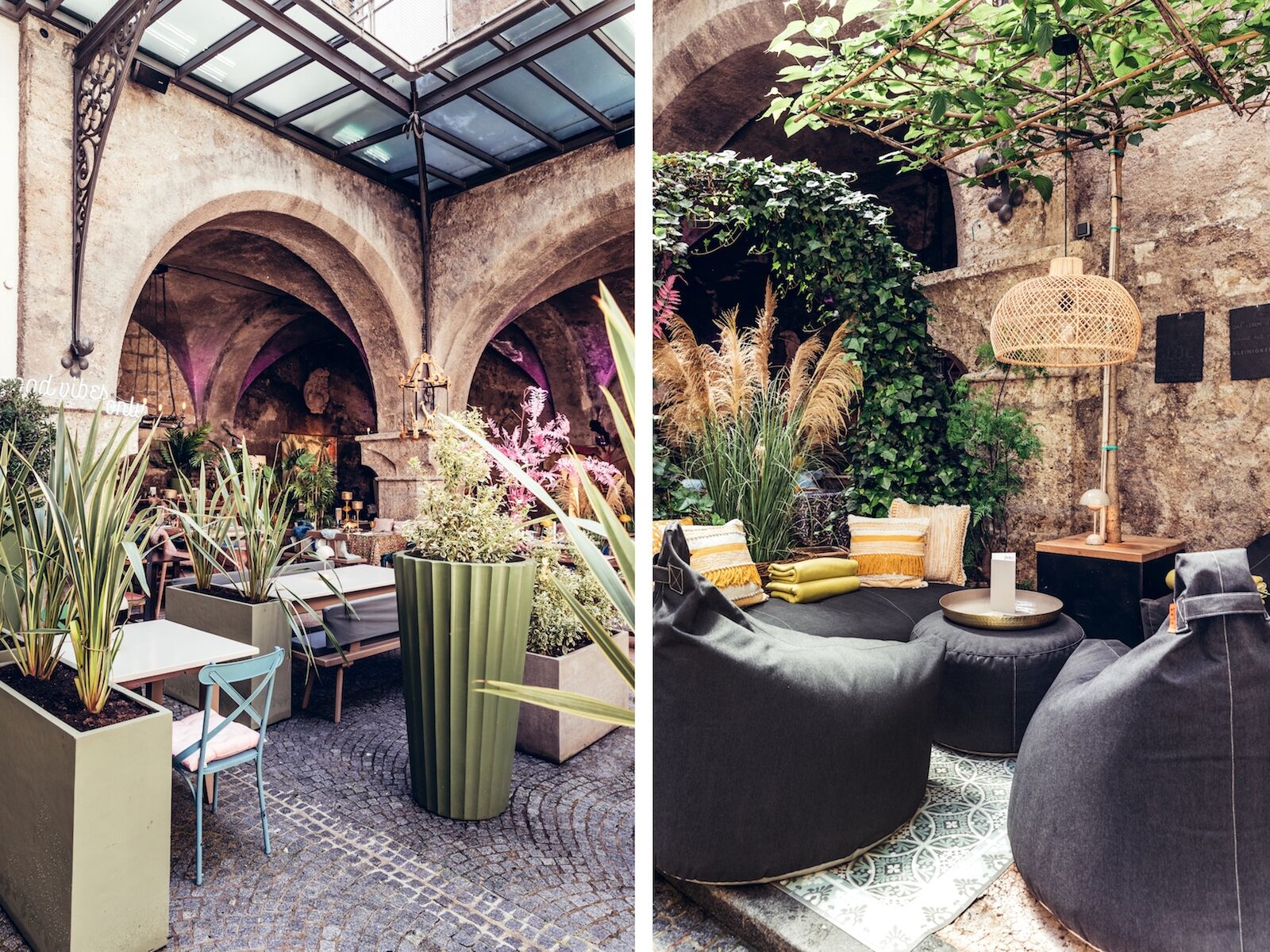 Aside from the historic stone arches, the brunch set up looks like something you’d find at a hip NYC rooftop lounge. Photo: St. Peter Stiftskulinarium/Anja Koppitsch Photography 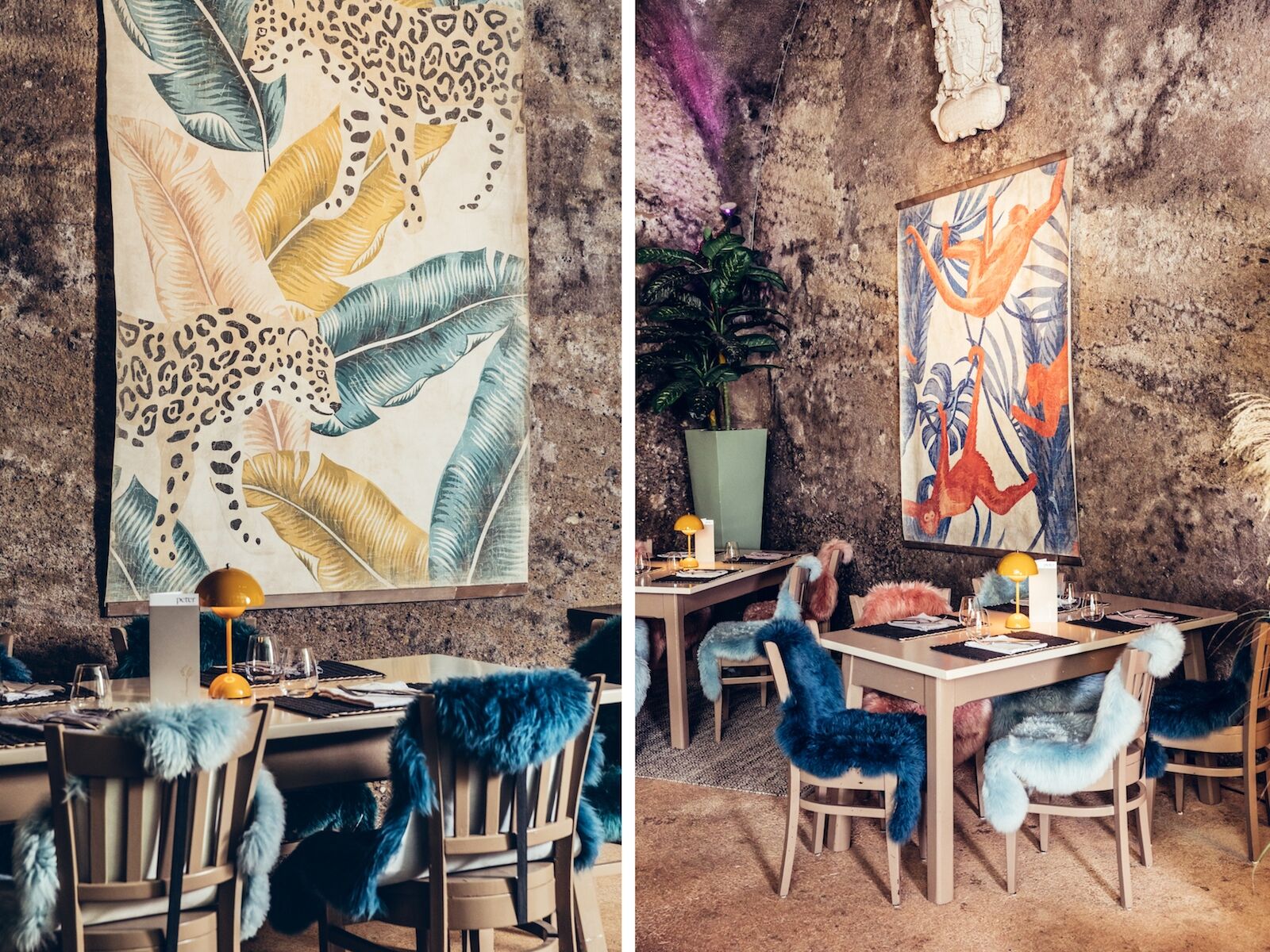 The tropical art and decor paired with dyed, faux-fur throws and mushroom lights look straight out of the 1970s. But I loved seeing the modern jungle artwork directly beneath the very old religious crest mounted on the stone walls. The decor did a great job of blending current and hip with historic elements. Photo: St. Peter Stiftskulinarium/Anja Koppitsch Photography 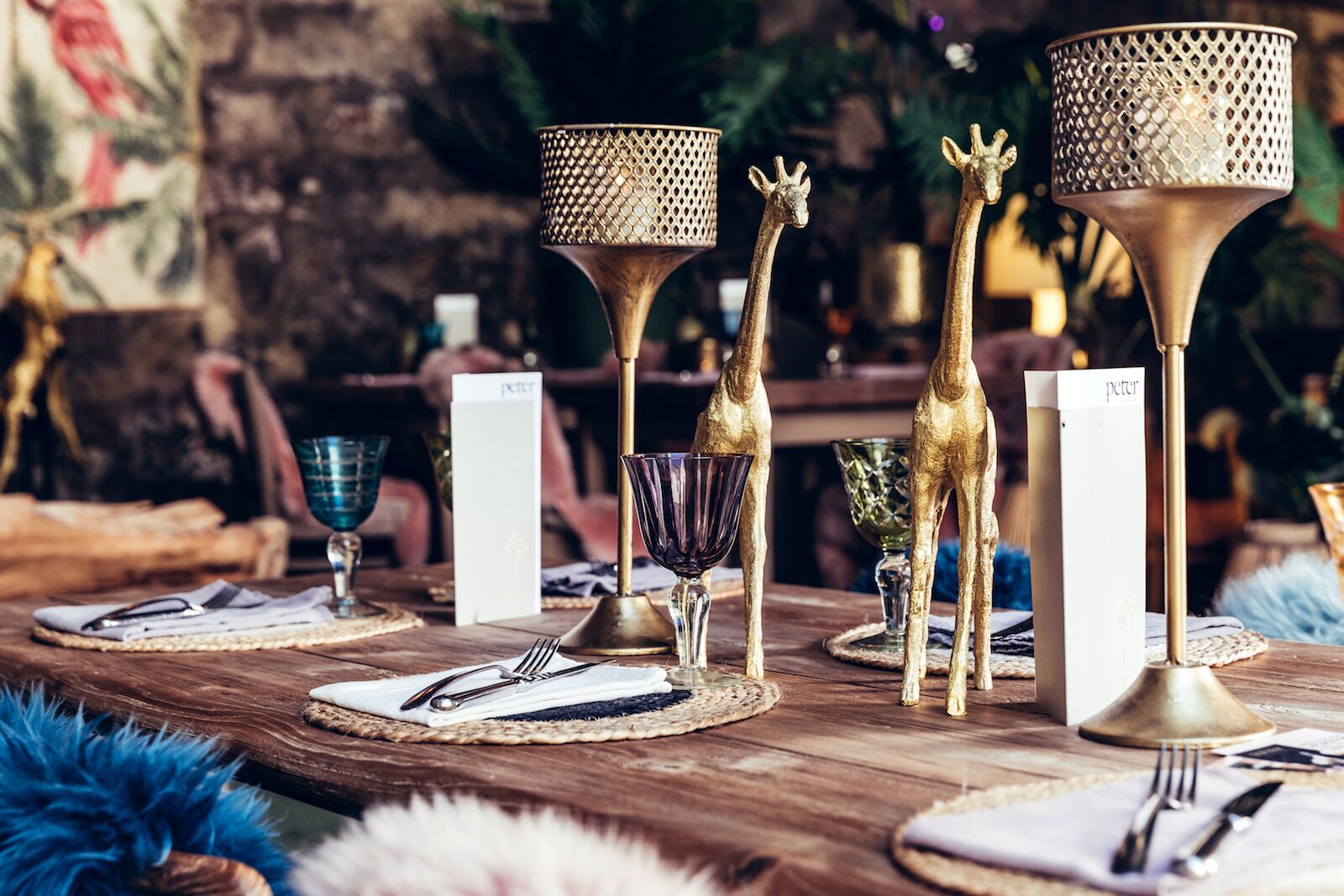 I have NO idea how gold-plated jungle animal statues tie in with a Charlemagne-era monastery in Austria, but I don’t care because I love it. The tiny details dotted throughout the restaurant are Pinterest-worthy. Photo: St. Peter Stiftskulinarium/Anja Koppitsch Photography 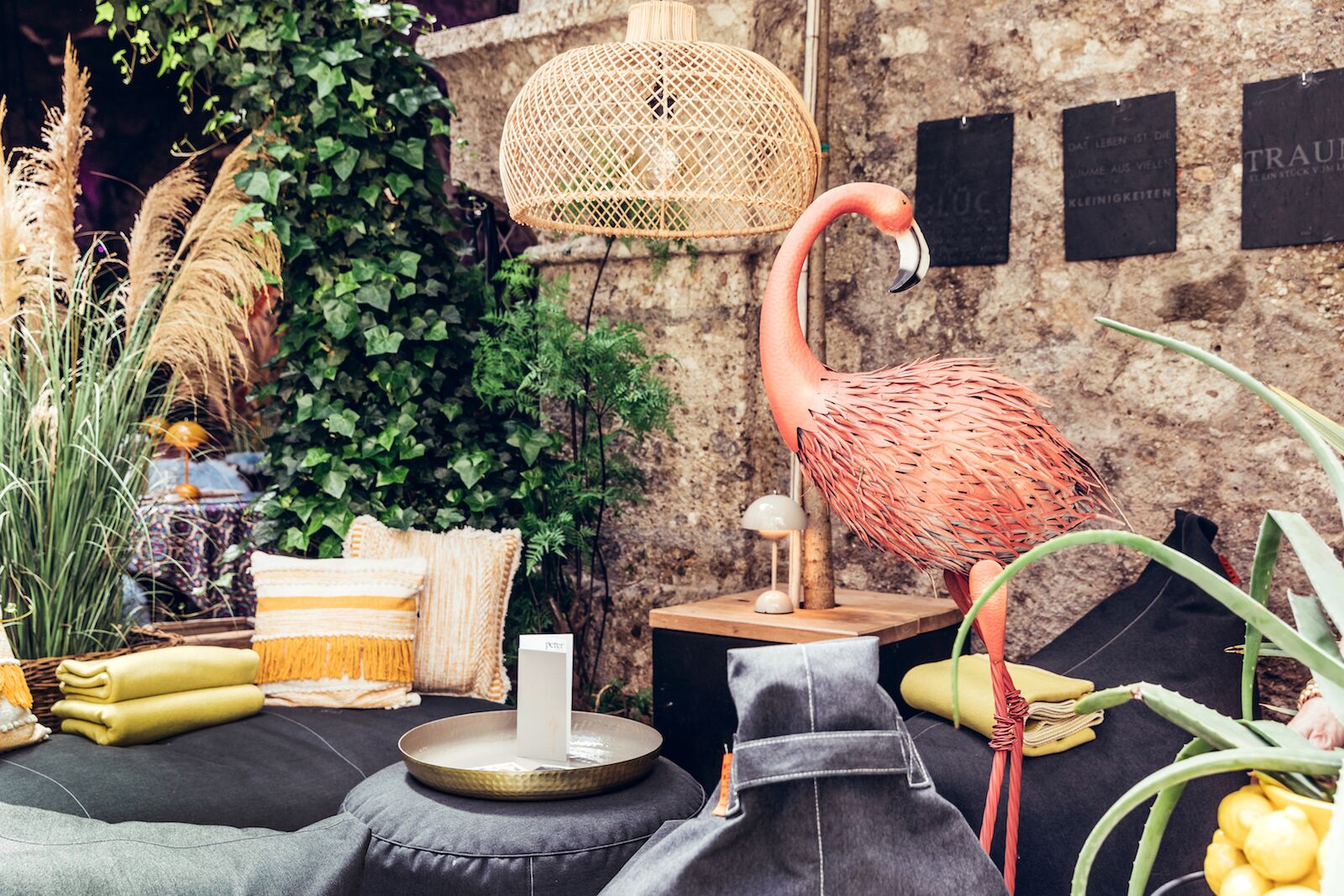 How is the oldest restaurant in the world so dang cool?

If you’re wondering, like I was, how St. Peter’s is so hip, the answer comes down to two people: Claus Haslauer and wife Veronika Kirchmair. Haslauer signed the first lease ever for the restaurant in 1992 at the age of just 25, and his wife began a serious redesign of the restaurant space in 1999. Kirchmair says she wanted to design something unlike other offerings in Salzburg.

“For PETER, I designed an urban jungle and want to spread that holiday feeling in the middle of the city of Salzburg. We placed great value on style and colors in order to exude happiness. Different plants and animal figures play a major role, as do natural materials,” she says.

And while she wants to keep ACHTHUNDERT&DREI more authentic, well, you can see how it turned out.

“At ACHTHUNDERT&DREI restaurant, we celebrate the traditional side of the house, with antique furniture and fine-dining table settings,” she says. “But we always incorporate a modern twist, like colorful wall paint and paintings.”

How to get a reservation

Getting a reservation at the oldest restaurant in the world isn’t as hard as you’d think, especially because the restaurant is so big. It’s easier during the off-season (not in the summer) and brunch reservations tend to fill up fairly quickly. Note that you can’t make requests for specific rooms, but you can walk around the entire building regardless of where you sit.

The exception to that is during the Mozart Festival, when snagging a table is a challenge, especially before a show. Make your plans as early as possible, especially if you want to attend a Mozart Dinner. As you might imagine, it’s a popular activity.

Expat Life5 of the Best American-Themed Restaurants Abroad, From the Kitschy To the Authentic
Tagged
Art + Architecture Food + Drink Restaurants + Bars
What did you think of this story?
Meh
Good
Awesome