The Ritz Carlton Hong Kong is where you’ll find the world’s highest bar. Hong Kong is known for its bustling streets and iconic food culture, and it’s a global commerce hub that’s often the first landing point for Westerners arriving in Asia. Located about 1,600 feet above the ground on the 118th floor, The Ozone is the best place to check out the city’s stunning skyline across Kowloon Bay and toward the hills beyond.

The Ritz Carlton Hong Kong is one of the world’s tallest hotels, and Ozone is on just about every list of iconic hotel bars and sights to see in Hong Kong. It’s a prime destination in a city full of them, the type of place that you look back on later and think, “I can’t believe I was there, that I actually did that.”

Upon arriving, you enter the hotel’s main lobby. A staffer will point you toward the proper elevator to ascend to the 118th floor. You’ll likely share the elevator with others going up to the bar, and odds are high they’ll be tourists like you. Expect a jovial, if slightly jittery, mood — you’re about to drink at the world’s highest bar and you never know who might be among the clientele. You’ve got to figure that people like Leonardo DiCaprio or Barack Obama would want to see this place should they happen to be in Hong Kong. 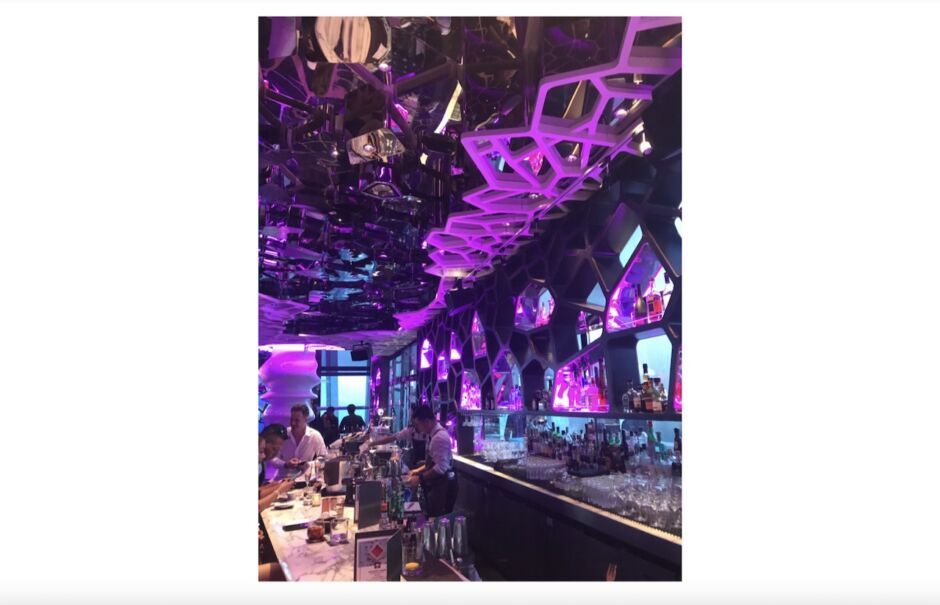 Arriving inside, the atmosphere is refined and classy, but the mood is surprisingly nonchalant. A neon-lit bar sits in the center, surrounded by lounge seating on a few high-tops. Behind the bar, a room with open seating surrounds the reason everyone is here: aerial views of one of the world’s most iconic cities.

The hotel is easy to get to via taxi or rideshare, but the best way to get there is to take the city’s MTR transit and get off at Kowloon Station. Or go on foot if you happen to be in the neighborhood already.

The bar has an enforced, but not super strict, dress code. Men are required to wear a collared shirt, and no open-toed shoes or shorts are allowed. A specific dress code is not listed for women, however most women at Ozone when I was there wore a dress or blouse. Regardless of your gender identity, you’ll feel most comfortable in cocktail attire. I arrived in the early evening and wore a collared button-down with beige pants and loafers. I felt on-par with the bar’s clientele (save for the fact that I had a hat on and most didn’t), most of whom appeared to be tourists or suit-and-tie business travelers.

I found Ozone to be formal in dress but easy-going in attitude. The view of Hong Kong immediately drew me in. The sun had begun to set over the country park behind the city, casting a purple glow across the water that reflected off the high-rise buildings on both sides. I ordered a negroni and gravitated toward the back room. 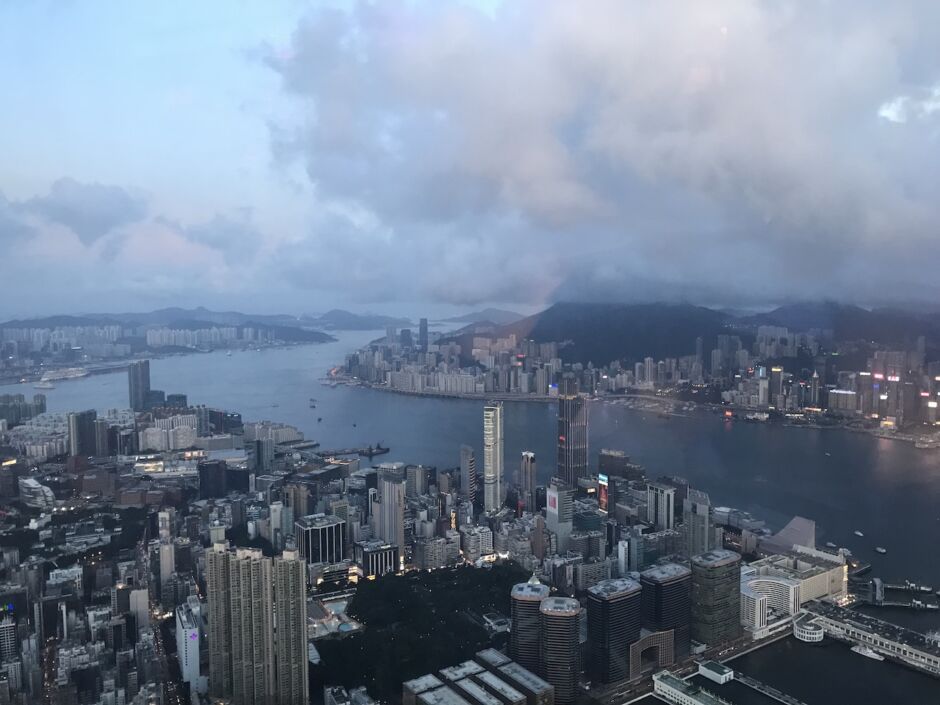 Incredibly, I knew someone in the bar — at least I thought I did. I believed it was a woman I’d met briefly a few years prior, across the world in Austin, Texas. I recognized the way she played with her straight blonde hair as she gazed out the window at the skyscrapers down below, and the contours of her face looked similar to the person I remembered.

No response. The one-way convo played out again as I approached, and then backed away realizing I must have been mistaken. But a few minutes later, she appeared at my table and asked for a photo of her with the skyline view behind. I took a few, and she returned the favor. She then walked away. I remain partially convinced it was the person I knew, and can’t help but wonder if what drove her to ask me for a photo was her thinking the same thing but concluding there’s no way she knows someone here, randomly, on the 118th floor of the Ritz Carlton Hong Kong.

Why I didn’t introduce myself then remains a mystery. I can only think that this is what happens when you’re in a situation that is so surreal you can hardly comprehend the fact that you’re there in the first place. Ozone is not only the highest establishment in which I’ve raised a glass, but it’s also among the most posh. It’s some 7,500 miles from my home in Colorado. Perhaps I instinctively sought something familiar among the conversations playing out in multiple languages around me, and this woman was the closest I could muster. Regardless, I came away from the awkward encounter with a photo of myself that remains one of my favorites. The fact that this mystery woman took it only adds to its significance. 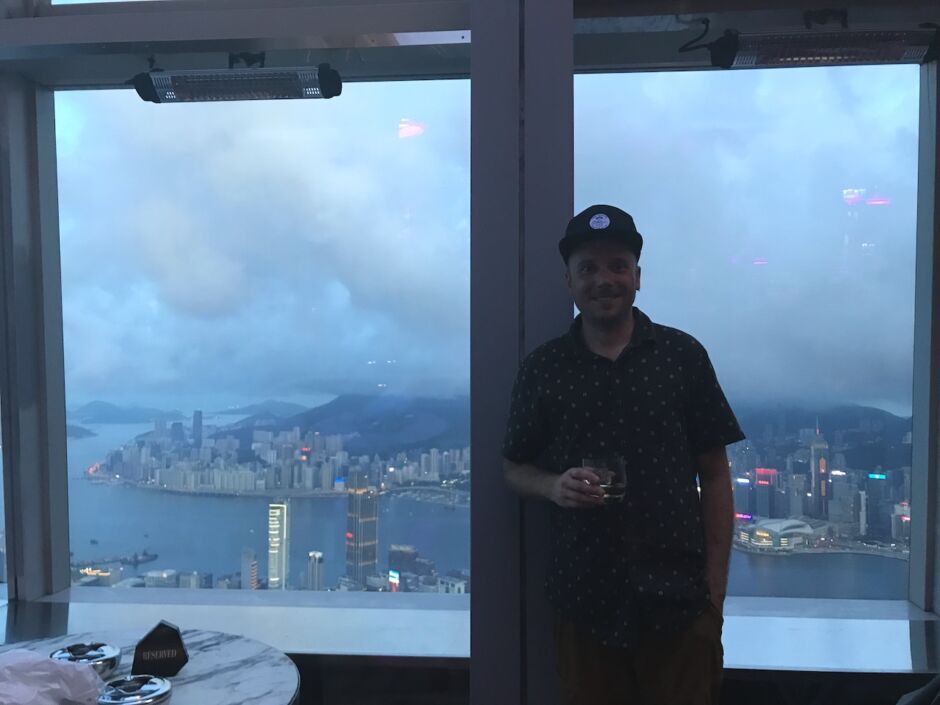 Photo courtesy of the mysterious woman who I maybe knew

Looking at photos of Ozone hardly captures the effervescent feeling of actually being there. Drinking in classy digs in a high-end hotel 1,588 feet above Hong Kong isn’t something you do every day. That’s why you absolutely must have a drink at Ozone when visiting Hong Kong. What’s in your glass isn’t any different, but it’s a drink you’ll always remember.

Food + Drink8 Essential Types of Dim Sum To Eat in Hong Kong
Tagged
Restaurants + Bars
What did you think of this story?
Meh
Good
Awesome

Dog Meat and Rooster Balls: The 10 Most Exotic Asian Foods

Cheap Eats in Hong Kong: So Tasty You'll Feel Like You're Stealing