In much of the United States, people must deal with the occasional dry and mealy peach at the supermarket. But if you live in Colorado, you probably know it doesn’t have to be this way. Because there’s a small town in western Colorado that grows, arguably, the best peaches in the country: Palisade peaches. All peaches are not created equal, as it turns out.

Grown mostly in the 2,700-or-so person town of Palisade, these peaches are legendary. Palisade is an agricultural powerhouse, and the orchards there produce hops, cherries, and lavender. It’s also Colorado wine country with its own fruit and wine byway people can bike. It’s the peaches that really stand out, though.

Known for a balance of flavor, Palisade Peaches contain just the right amount of tart and sweetness. Then there’s the size: They’re bigger than what you might find in the supermarket at about the size of the average adult’s fist. 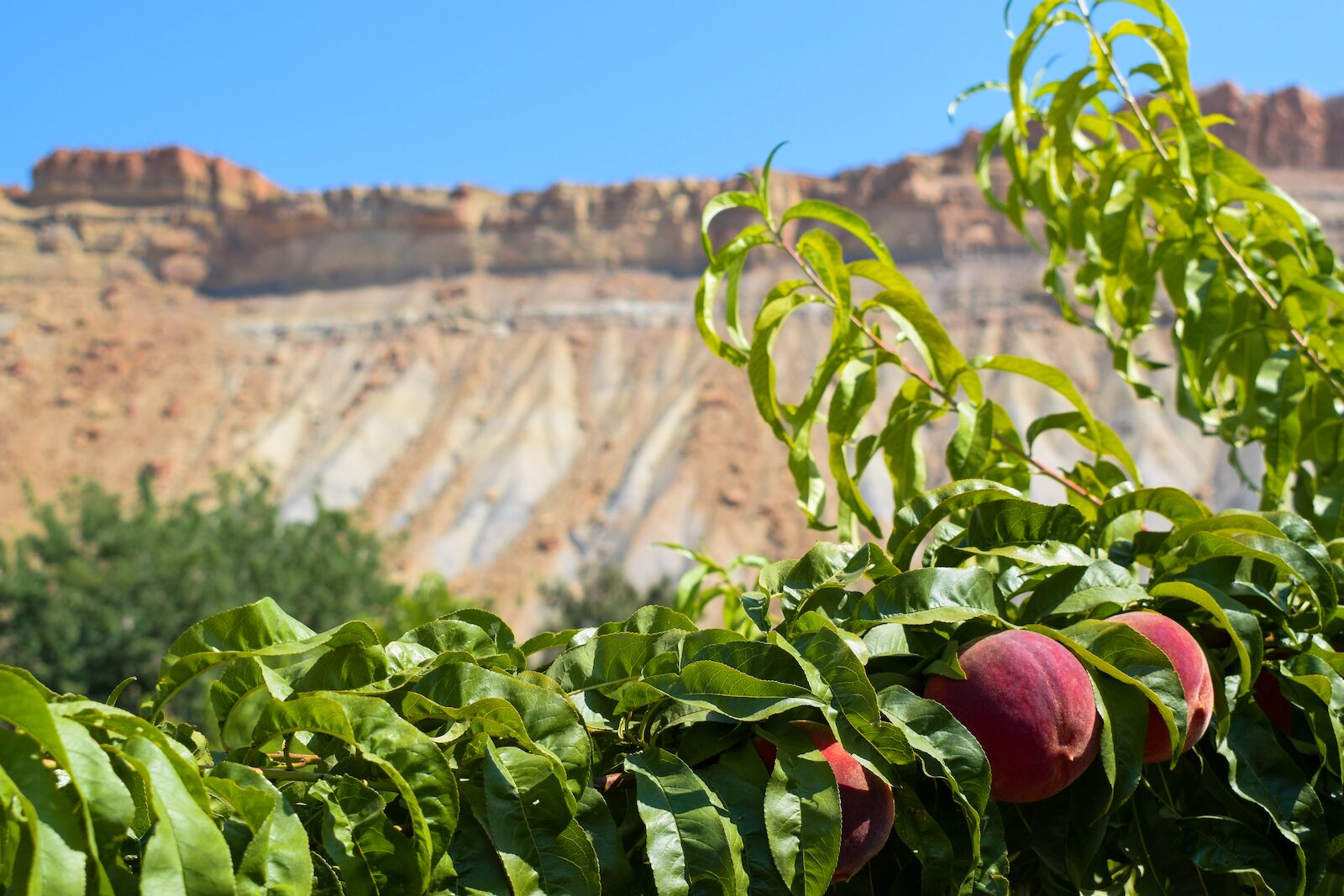 “Palisade peaches are the best,” Asonta Benetti, a food and drink writer, tells me. “As a kid growing up in Grand Junction, we would drive to Palisade for boxes of peaches and cherries for my mom’s canning jars. Every summer after we moved, we would drive back to Colorado for a couple weeks and made sure to pick a few up, cradling them gently on the drive back.”

The success of Palisade peaches in this town can be traced to one man: A settler to Colorado named John Harlow. Harlow planted the first groves of fruit trees in the area in the 1880s, after the Indigenous Ute people were forced off their land, according to Uncover Colorado. By 1888, Harlow was producing award winning batches of Palisade peaches and launching this fruit to nationwide fame.

The general consensus is that Palisade’s climate gets much of the credit for these juicy fruits. Diurnal hot days and cool nights in summer allow the sugars in fruit to develop. Harvest season for Palisade peaches begins in late June and runs into mid-September, which means the best time to pick up a box of peaches is from the height of summer to early fall. Supermarket peaches in parts of the country where the fruit doesn’t grow must be harvested early before they’ve fully ripened to survive the journey, so eating Palisade peaches close to the orchards is key to finding the best ones.

There are plenty of Palisade peach orchards that let you pick your own fruit. Just look for golden-orange peaches with no green if you’re looking to pick something that’s ripe and ready to eat with fully developed sugars. Once the peach is picked off the tree the sugars stop developing and the peach starts to get soft.

Where to find Palisade peaches in Colorado

Owned by the Sanders family, Palisade Peach Shack offers u-pick tours of its cherry, apricot, and peach orchards during the summer. The adjoining market offers a variety of jams, in flavors ranging from apricot plum to peach almond, as well as apple and pear butter.

Cunningham Orchards specialize in Palisade peaches, pears, cherries, and honey that’s harvested from bees that roam the farm freely. What makes this farm notable is the Cunningham Peach Truck, which delivers Palisade peaches directly from the orchards to Oklahoma, Texas, New Mexico, and Kansas. The truck posts its scheduled stops where people in the area can pick up their own peaches on July 18.

This orchard has been operated by the same family for seven generations. Clark Family Orchards offers free tours of orchards on a horse-drawn carriage, and the peach stand opened in June. The farm also grows cherries and apricots, and harvests honey. One big bonus about this farm is that it also produces Palisade peach ice cream.

2022 marks the 54th annual Palisade Peach Festival, which celebrates the local farmers who grow these famous peaches. A Peach Queen is crowned, and there is live music, farm tours (the adults-only version includes a wine tasting), and chef demonstrations to enjoy throughout the weekend. Other family friendly activities include a pancake breakfast and a peach eating contest, plus a parade to top the festivities off. This year’s festival takes place from August 12 through August 13.

High Country Orchards is special because it accepts orders for boxes of peaches that ship nationwide. But if you’re in the area, self-guided tours through the orchards are welcomed where you can see not just peaches but rose gardens and views of the Colorado River. There are also four vineyards located on the High Country property that grows grapes used by Colterris winery, and there is of course a country store on site where peaches and wine are both available that’s open from June to the end of August.

Nana and Papa, otherwise known as Becky and Lance Davis, operate a peach orchard in Palisade where the family peach shack was once located. In 2020, the Davises opened a new shop in Downtown Palisade. The shop now sells a whole array of pantry staples, from jams, to barbecue sauce, salsa, salad dressing, pickles, and even Bloody Mary mix.

If you want to sample Nana’s peaches but you’re elsewhere in Colorado, head to the Davis’s roadside farm stand in Steamboat Springs. It’s open June through September. On the weekends, the orchard’s peaches can also be found at the Steamboat Springs farmer’s market.

CyclingHow To Bike the Fruit and Wine Byway in Palisade, Colorado
Tagged
Food + Drink
What did you think of this story?
Meh
Good
Awesome

How To Bike the Fruit and Wine Byway in Palisade, Colorado