Street food is an integral part of Southeast Asian culture, and if you don’t indulge your senses over cheap, delicious meals enjoyed on little plastic stools, you haven’t really experienced the region at all. The scene in Penang, Malaysia, is unique from more popular hubs like Singapore, where street vendors have been confined to a number of organized hawker centers throughout the city, and Bangkok, which appears to be headed in that direction. The iconic vendors of the state of Penang, many carrying on multi-generational traditions, line the urban streets of the capital city, George Town, serving recipes representing the region’s Indian, Chinese, and Malaysian heritage. The UNESCO-protected city center is one of Southeast Asia’s most underappreciated culinary hotspots. Here’s how to experience it like a local.

George Town is a melting pot of Asian cuisines. 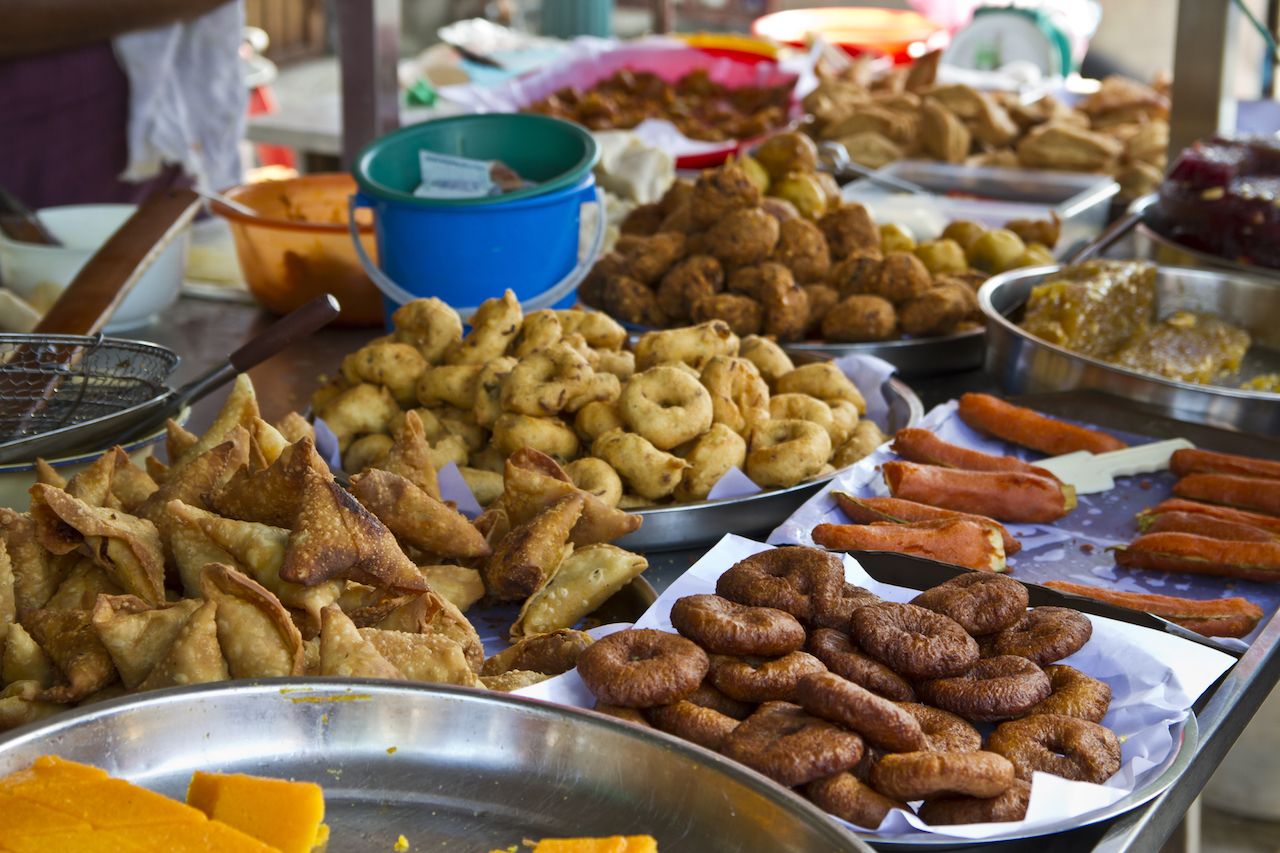 First, some background on Penang itself. Penang is a Malaysian state along the coast of the Malacca Strait. The vast majority of the state’s population lives in the metro area along the coast and just offshore on Penang Island, home to the state’s capital city of George Town. The bustling capital is lined with bright buildings in every color imaginable, the spicy aromas of freshly cooked meats and veggies permeating alleyways and street corners and adding to the city’s hospitable charm. It has long served as a shipping port and major stopping point for English-driven trading routes, and it didn’t take long for the flavors of India and the rest of Asia to blend in with traditional Malay recipes.

George Town rose to regional prominence during British colonization in the late 1700s. This city of about 700,000 anchors the greater metropolitan area of over two million that stretches across the Penang Bridge onto the mainland, and it’s here that you’ll find the easiest access to the rich, multicultural layers of Penang’s cuisine. Penang International Airport is located about 25 minutes south of the city.

Take in Little India and Chinatown in the same afternoon. 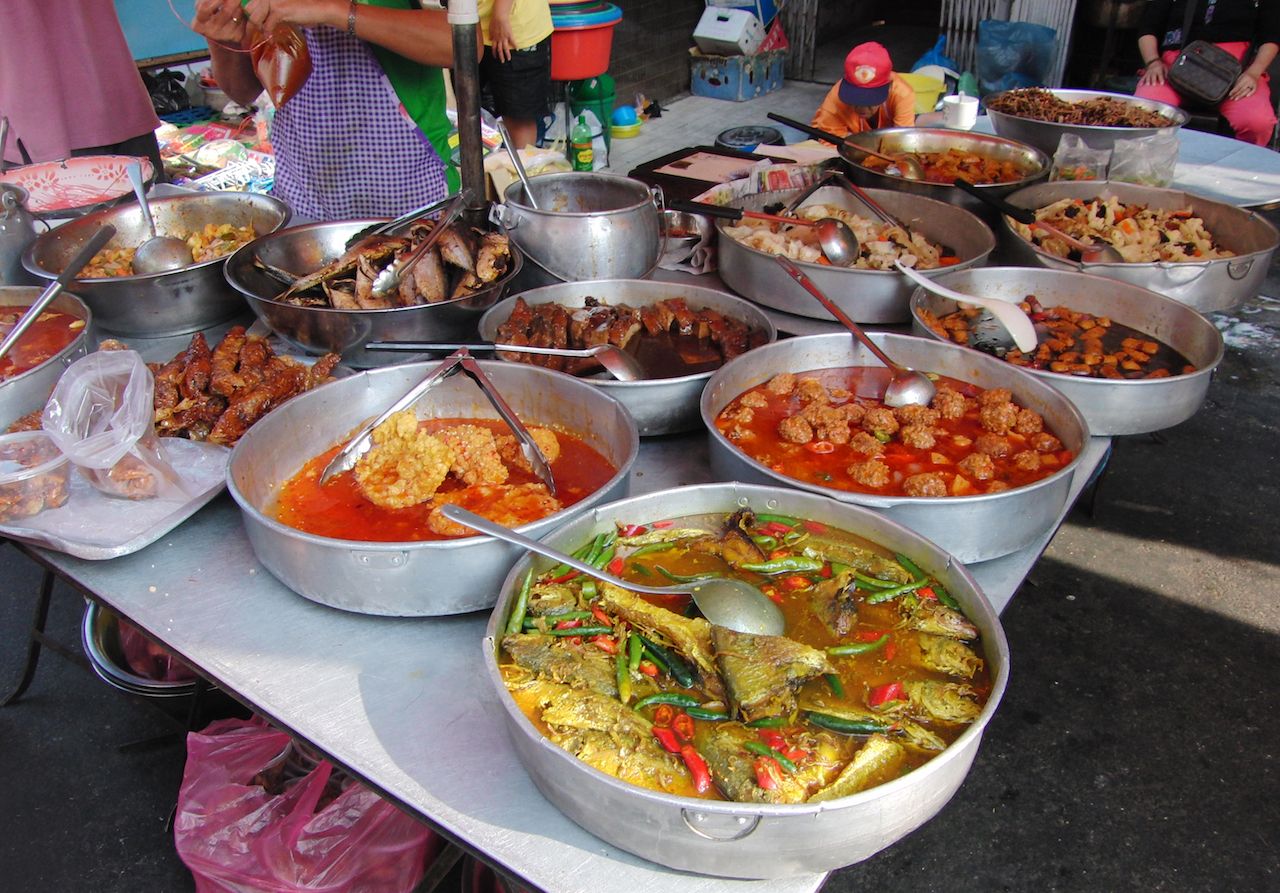 Plan to spend the bulk of your time in Penang meandering through the city center, home to George Town’s Little India and Chinatown. The streets don’t follow a grid by any means, but you’ll pick up on the patterns as you walk around. The most important thing to note beforehand is that most streets are labeled either as Jalan, if it’s approximately running east to west, or Lebuh, if approximately running north to south, although they often veer off the axis quite a bit.

Penang is one of the best places in the world to get Indian food outside of India, rivaling even the hawker centers of Singapore and the plethora of hidden hideouts sprinkled throughout Kuala Lumpur. Over one-third of Penang’s population is descended from Chinese ancestry, and the capital city’s hectically inviting Chinatown offers the spice, rice, and flavors locals and their ancestors brought with them. The island is also a hop, skip, and a jump from Phuket and the rest of southern Thailand, allowing strong influence from Thai cuisine in the food culture here, as well. This is most noticeable in the ready availability of incredibly hot spices. While not every dish is burning hot, don’t be offended if asked about your tolerance for heat — and don’t be overconfident about it either. 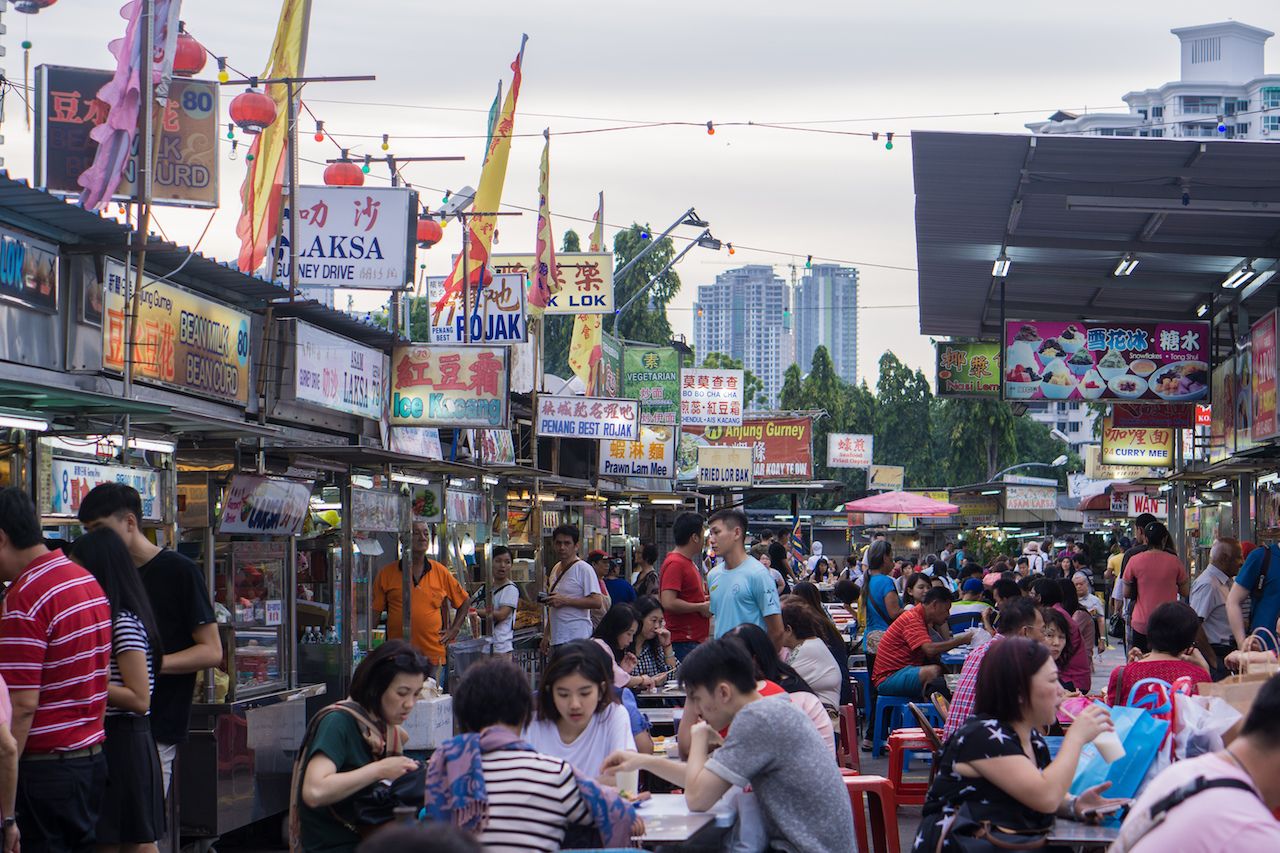 Show up to the waterfront hungry — and with a good pair of walking shoes. Start here, then make your way down Gurney Drive where the smell of rice, veggies, and meats bathing in ghee rises from the street. The seemingly square neighborhood is bordered by Market Street, Queen Street, China Street, and King Street. Vendors dot Chulia Street, one of the city’s oldest thoroughfares, for the evening market where you’ll find fresh batches of biryani, curry, and naan along with chili dishes and more customized family recipes. Everything from fresh meats grilling streetside to sit-down establishments where you can escape the crowds is within a few blocks during the day, as well.

Penang Special Samosa on Queen Street is the perfect place to grab a bite for the walk, but you absolutely must try the Chicken Tandoori at Sri Ananda Bahwan, which has a few hawker outlets across the area. If your feet need a rest, hop in the back of a trishaw and be sure to chat up the driver. While this area is driven by Indian cuisine, the neighborhood’s thriving Muslim population has its own hotspots, and your driver will likely have a few gems for inquiring minds. As is typical of Little India neighborhoods the world over, there is no shortage of shops hawking everything from jewelry to clothes to electronics. Carry Malaysian Ringgit with you, and don’t be afraid to bargain.

Eating your way through Chinatown. 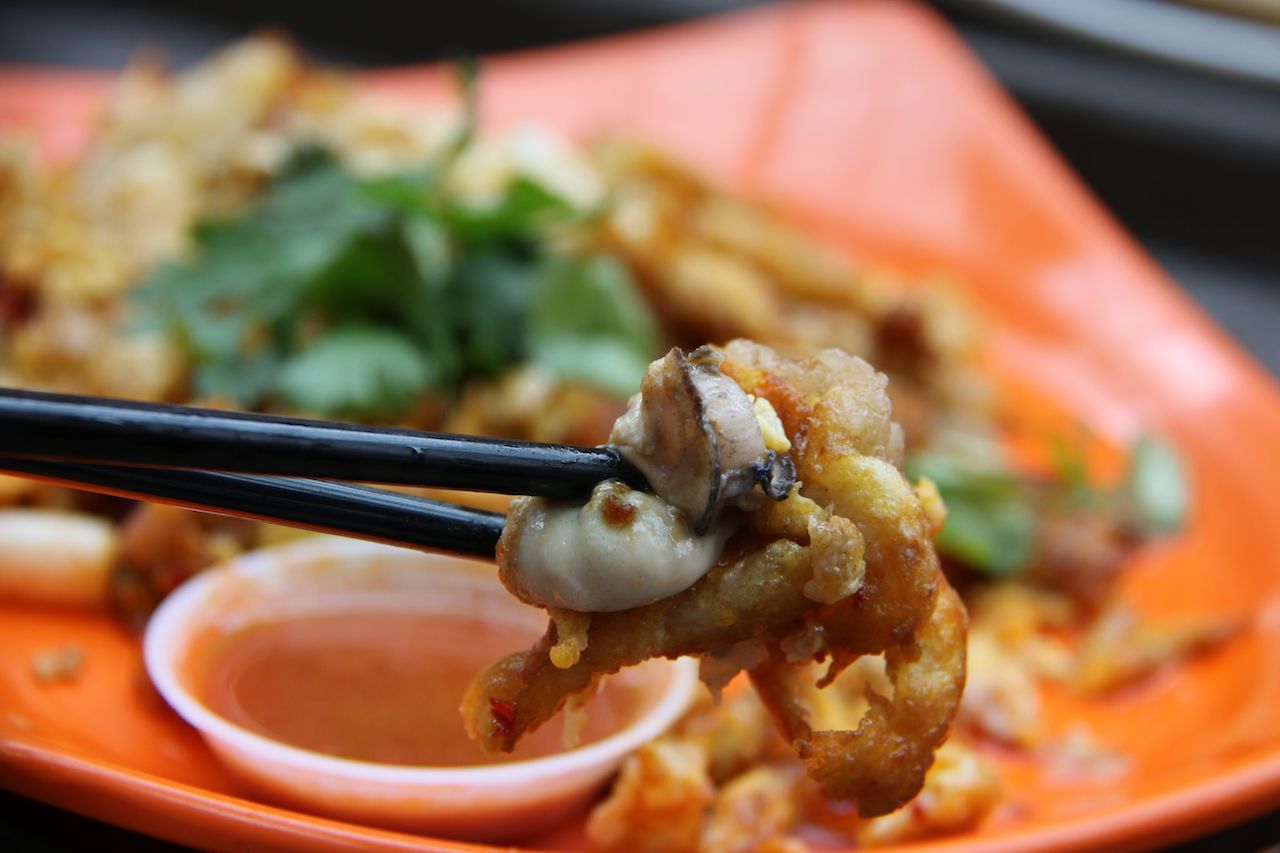 Penang’s Chinatown does Hainan Chicken Rice as well as any in Southeast Asia, and Wen Chang Hainan Chicken Rice is the place to indulge and set the standard. The dumplings at Cintra Food Corner on Jalan Ria are second to none, with multiple styles to choose from. Chicken Siew Pau, a flaky bun stuffed with BBQ chicken, is a hot commodity from the street vendors and certainly worth a try. On Lebuh Kimberly, try Steamboat Soup, a piping hot soup that simmers on your table as you add vegetables and meats to taste.

The street becomes a slightly chaotic market at night, with pedestrians dominating the streets and bicycle rickshaws and motorbikes pushing through. There’s also plenty of options for dim sum, another must try. Because of Penang’s large Muslim population, pork options will typically be separate from fish and other meats, making it easier to identify what you’re getting. If you’re feeling brave, plug your nose and dive into a fresh durian.
Char Koay Teow is another staple meal throughout Penang. This noodle dish evolved in the Guangdong province in China and combines prawns stir-fried with flat noodles, soy and chili sauces, blood cockles, bean sprouts, and often other proteins like egg or chicken. Try it from a street vendor, and if it suits your fancy, sample a few offerings throughout your trip.

The best of the rest: 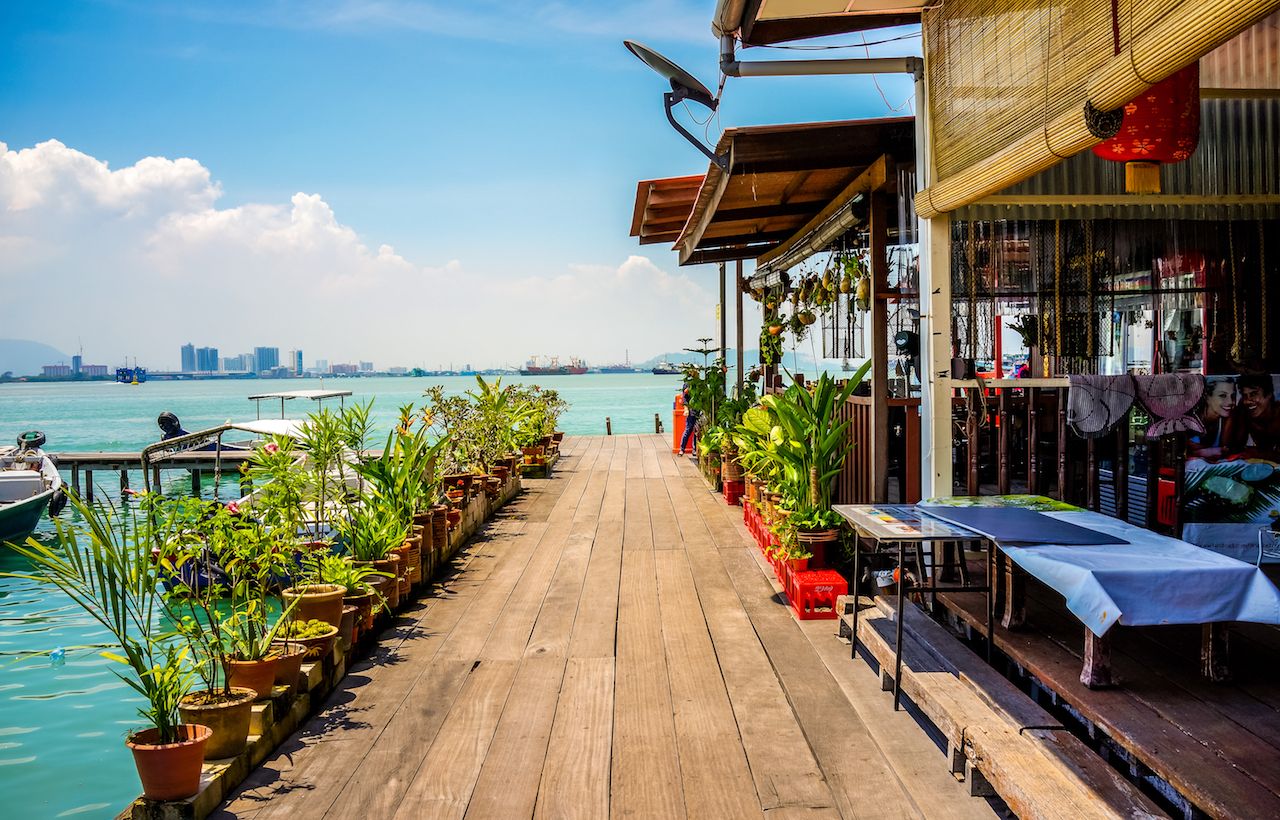 Perhaps the biggest draw to Penang’s foodie scene, in addition to the flavors themselves, is the versatility. Whatever you’re craving, you can not only find and devour it but also often choose how much ambiance you’re willing to pay for. For off-the-street dining, the Michelin-starred PUTIEN just off Gurney Drive is the place for date night. Plan to drop at least $200 per person, much more than you’d spend in a month on street food — but the abalone is the best you’ll find in the region. For high-end Indian cuisine, Karaikudi in Little India serves the best masala in town, along with Indian-inspired seafood and chicken dishes. When the Chinese craving hits, settle in at 7 Village Noodle House or Teksen Restaurant on Lebuh Carnarvon.

If ambiance isn’t your top priority, one thing you’ll fast figure out in Southeast Asia is that the old mantra of patience being some kind of virtue can be tossed right out the window. Penang starts eating before the sun rises, and there’s certainly no reason to wait until midday to indulge in culinary delicacies. You can indulge in Malaysia’s national dish, Nasi Lemak, as early as 5:00 AM in many parts of the city. The dish features white rice cooked in coconut milk and pandan leaf, and it’s served with boiled egg, cucumbers, sambal, and typically lamb curry and even anchovies. No problem if you’re still asleep at that time — the dish is served all day.

Penang also has plenty of food courts throughout the city that offer multiple cuisines under one roof. Sri Weld Food Court is among the most popular, located on Lebuh Pantai a few blocks off the waterfront in George Town’s city center. Red Garden Food Paradise on Lebuh Leith is popular, as well. If every last craving isn’t satisfied when it’s time to head home, it’s a sure sign you didn’t spend enough time looking.

Hiking16 Travel Experiences To Have in Malaysia Before You Die
Tagged
Food + Drink Insider Guides Malaysia
What did you think of this story?
Meh
Good
Awesome