When I moved to New Jersey in 2015, I started attending what felt like an endless parade of first birthday parties, baby showers, and weddings. These events included many similar elements: Confetti filled balloons, a folding table stacked with bottles of generic white and red wines, and a buttercream cake. The most consistent aspect, however, is probably the menu. It’s destined to be Italian-American cuisine — sometimes served by a server, but more often at a buffet — and penne alla vodka is nearly always the main course.

Growing up in the Pacific Northwest, I didn’t have much experience with the nuances of Italian-American food, so penne vodka surprised and excited my palate. I love the tang and the creaminess of the tomato sauce, captured in the humble ridged penne pasta. The soft orange hue of the sauce heaped in a metal platter, flecked with chunks of tomato or cubes of pancetta came to symbolize a feeling of both comfort and celebration.

For the first part of my life, I never felt a special affinity for Italian food. Now I depend on penne vodka for that precious, rare feeling of true satisfaction after a meal. I crave the dish equally on special occasions or a late-night after a chaotic day at work — the type of day when you don’t want to do anything but eat and then pass out in bed with the remote in your hand.

It’s believed penne alla vodka was created in the 70s or 80s, though the exact origin story is unknown, according to Serious Eats. What is clear to anyone who enjoys the dish is that the flavors are so simple and depend on the most basic ingredients. That utter lack of any fancy or artisanal ingredients or cooking techniques is in part what’s behind the dish’s immense popularity. While some basic meals benefit from the upscale craftsmanship of a professional chef (like steak and potatoes, for instance), penne alla vodka is not one of them. 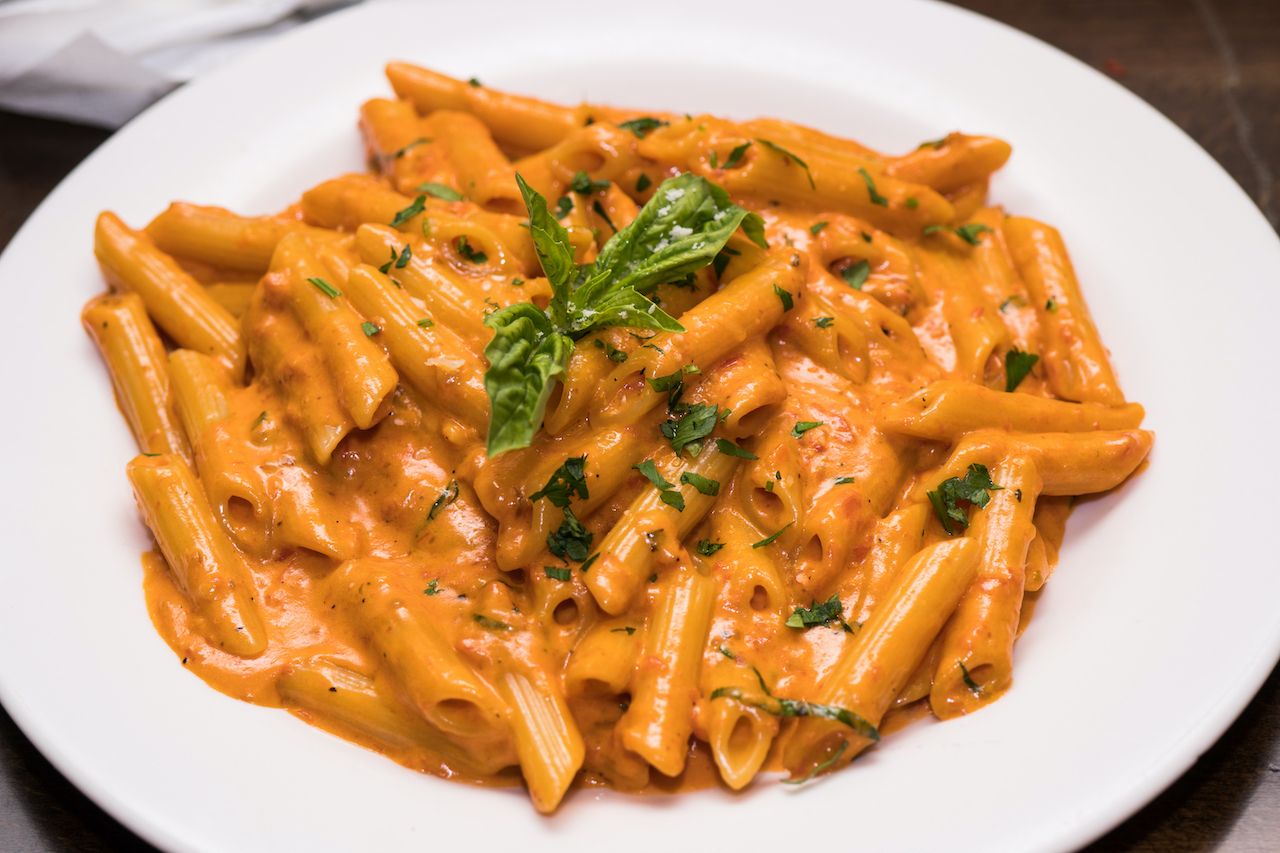 The vodka sauce in question consists of those fundamental ingredients that are, arguably, the building blocks of the most delightful dishes, especially in Italian-American cuisine: Cream, garlic, cheese, and butter, tempered by the acidity of tomatoes. Many recipes will encourage simmering the rind from a wedge of Parmesan cheese in the sauce to add a boost of salty, umami flavor, or to add a sprinkle of red pepper flakes for a touch of heat (and, of course, there’s the namesake splash of vodka). However, it’s really those tomatoes that are key. They prevent the sauce from turning out so rich that you can only take a few bites of the dish before feeling full.

New Jersey has a near-romantic attachment to its home-grown tomatoes — sweet and acidic ruby red bulbs that are (literally) bursting with the juicy flavors of summer. Thanks to the ideal climate and soil conditions for tomato farming, even the most unassuming delis and supermarkets in the state carry high-quality tomatoes that outrank most other tomatoes in the country.

Of course, penne vodka isn’t even made with New Jersey tomatoes. The best recipes call for Italian-grown San Marzano tomatoes. But one reason that vodka sauce might have taken root at buffet stations around the state is that New Jerseysians are already accustomed to the flavors of tomato-based pasta sauces.

“In a lot of traditional Italian cuisine, while some dishes are sauced, it’s on the lighter side,” says Marcello De Feo, owner of Valente’s Cucina in Haddonfield, New Jersey. “But when you go to New Jersey or New York to an Italian-American restaurant, you get a lot of sauce on a pasta dish.”

De Feo began his cooking career on the Jersey Shore at an upscale Italian-American restaurant in Wildwood Crest. Still, his palate is more accustomed to the cuisine of Abruzzo, the region in Italy where his family originally hails from. De Feo opened his restaurant in 2017 and named it for his mother, who passed away in 2004. Instead of cooking more mainstream Italian-American dishes, he decided to focus the menu on the food of his ancestral homeland, like lamb ragu and salsiccia (Italian sausage) served with whipped ricotta.

For De Feo, what defines traditional Italian cuisine is that it uses fresh ingredients specific to a particular region. For instance, in the mountainous terrain of Abruzzo, the resident goat will often be the main course. As the region of Italy changes, so do the ingredients — and that’s the exact transformation that occurred when Italian people began immigrating to the United States: Family recipes adapted to the ingredients available in their new home.

Penne vodka is one of the most prominent dishes in Italian-American food — dishes like veal marsala and chicken Parmesan also make the list.

Italian-American cuisine, De Feo says, “evolved out of the core concepts of Italian cuisine” but should be considered its own category. He adds that there’s value in both, though the two shouldn’t be conflated. To understand the difference between traditional Italian cuisine and its Italian-American relative, you must start by looking at the ingredients. 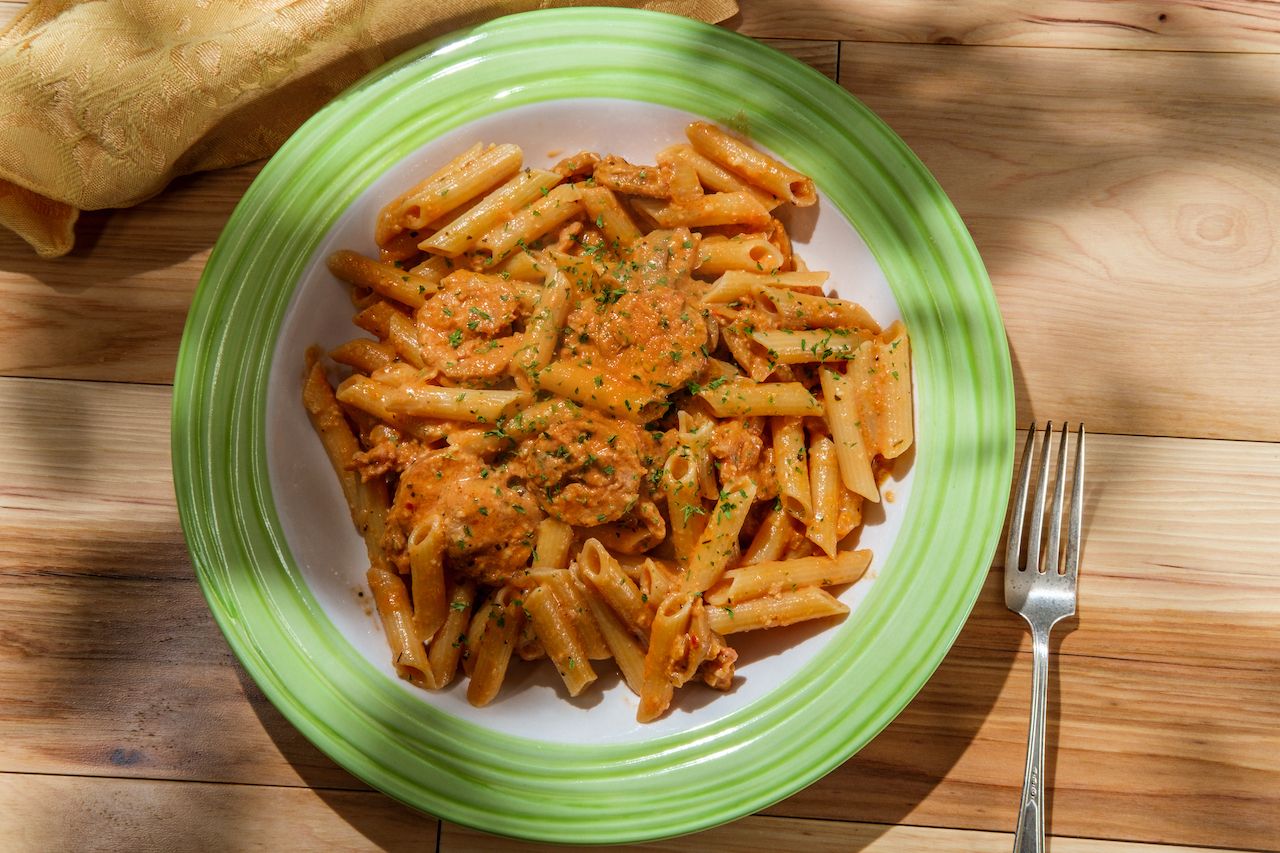 For one thing, dairy is much more prominent in Italian-American cuisine because of the large milk and cheese industries in the country. The American palate is primed to love the richness and fattiness of creamy, buttery sauces.

“It’s comfort food,” De Feo says. “The winter can be terrible [on the East Coast], so to have something that is carb-heavy and warming — it’s kind of natural that a chicken parm or a vodka sauce would become popular.”.

“In New York and New Jersey, it’s a completely different animal, literally,” De Feo says. “In areas that were severely impoverished, Italians couldn’t afford cow and pig, even the farmers who farmed these animals. The cost of meat was so much more reasonable and so much more plentiful [in America], and I think that ultimately led to what I consider a new cuisine.”

There’s another element at play here: Italian-American cuisine is accessible and inexpensive to make. “It’s something that people can easily make in their homes with just a handful of ingredients in very limited time, so it’s appealing to home cooks and chefs for that reason,” De Feo adds. “And maybe you throw in crushed red pepper and burn off some vodka in it, and it takes it to a whole other level of intrigue.”

At his restaurant, De Feo wouldn’t necessarily add vodka to one of his dishes to elevate it, but he understands how pleasurable and satisfying these dishes are. Italian-American food might not be traditional to Italy, but it doesn’t have to be made with ingredients pulled directly from the mountains of Abruzzo to be considered authentic. Anyone who has been to a baby shower in New Jersey knows there’s hardly any dish that represents the state’s tastes better than penne alla vodka (OK, maybe a chicken parm sandwich is a close contender).

Even if there are some food purists out there who’ll argue that conversations about Italian food should never include a pasta dish like penne vodka — who cares? What makes penne vodka so beloved is not that it perfectly imitates traditional Italian food, but that it comforts people and makes us feel good. In the end, that matters more than debating its exact origins.

Restaurants + BarsNew Jersey Sandwiches Are an Art Form. These Are the 9 Sandwiches To Try.
Tagged
Food + Drink New Jersey, United States
What did you think of this story?
Meh
Good
Awesome