Philadelphia has many things to see, like exploring graffiti pier and the absolutely incredible infinity pool on the 52nd floor overlooking the city in the Four Seasons Philadelphia. Yet when it comes to food-related attractions, few are like Pizza Brain, the home of the largest collection of pizza memorabilia in the world. It holds the Guinness World Record for the most pizza memorabilia while also serving delicious pies and being covered in pizza-themed murals. Bizarre, but I dig it.

From the second you walk in the door, you’re hit with the aroma of melty cheese and sweet tomato sauce, which really adds to the aesthetic of the Pizza Brain Museum. To the left, you can see the crew baking hot fresh pies, and to the right is the start of all of the pizza memorabilia. The glass case protects items like a Pillsbury Doughboy and troll doll — both pizza-themed figurines, of course. I personally love the wall that’s a shrine to Ninja Turtles and other pizza lovers, including a pizza-shaped TV remote still in its original packaging.

Co-owner Joseph Hunter tells me some of his favorite items in the collection include two pizza cutters: One is a Star Trek Enterprise pizza cutter and the other is an electric pizza cutter, which he readily admits is a ridiculous concept. According to Hunter, it’s impractical for actual use because it wobbles back-and-forth and you have to plug it into the wall.

It’s hard to pick just one piece of pizza memorabilia that stands out the most. Among Pizza Brain’s collection are some really unusual items, like art from their friend Steph Mantis, a New York artist whose father owns Pizza by Alex. Mantis creates art out of real pizza coated in resin epoxy, essentially sealing and preserving it. There’s a wall dedicated purely to vinyl, and pizza ceramics and pizza cologne — yes, pizza cologne. Pizza Hut sent the owners a bottle of cologne that’s supposed to smell like hand-tossed pizza for their collection.

With the collection that Hunter and the other co-owners had built up, they wanted to see if they were in the running for the most pizza memorabilia. As Hunter recalls, they called Guinness and asked, “Hey, is this a record?” They cataloged everything they had at the time, and then a representative from Guinness flew in to count the items. The pieces were set up like a little art gallery, so people could come in while the count was going on — and when they were getting the award. 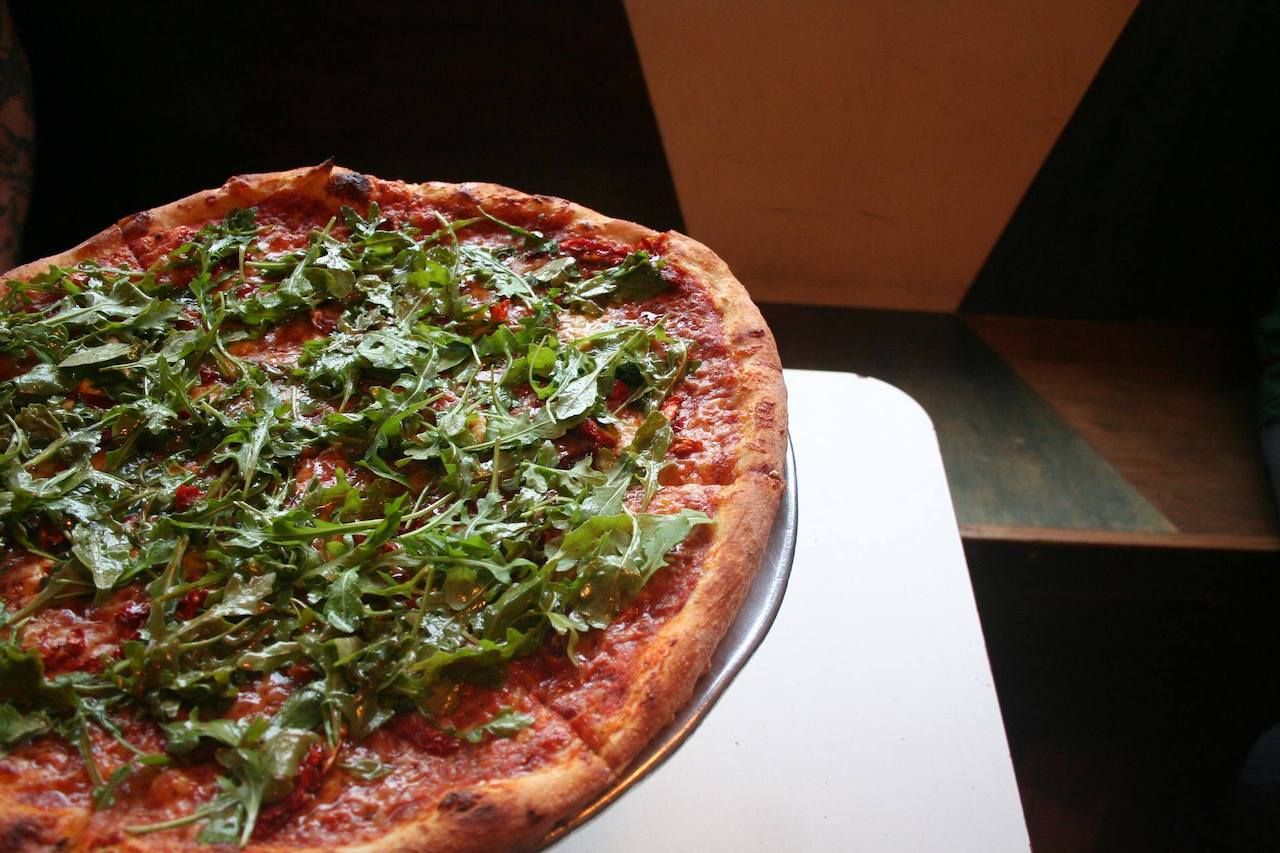 Pizza Brain is more than just the location of a record-holding collection. It’s a pizzeria, too. Hunter, the chef, joined Michael Carter, Ryan Anderson, and Brian Dwyer (who has since left the business) to open Pizza Brain in 2012. The museum wasn’t always part of the plan, but after realizing the team had so many pizza items, they continued collecting pizza memorabilia to add to the collection.

“Over time, the team curated a larger amount of pizza-related items through art shows and collecting from friends and fans,” Hunter says. “Americans just love pizza, we don’t even question it or think about it.”

The team is always trying to collect more items. Now that they’re a little more well known, people say things like, “Hey, I’ve heard of your museum and want to give you these items,” Hunter says, and the owners will pick up t-shirts, pins, and stickers while traveling. 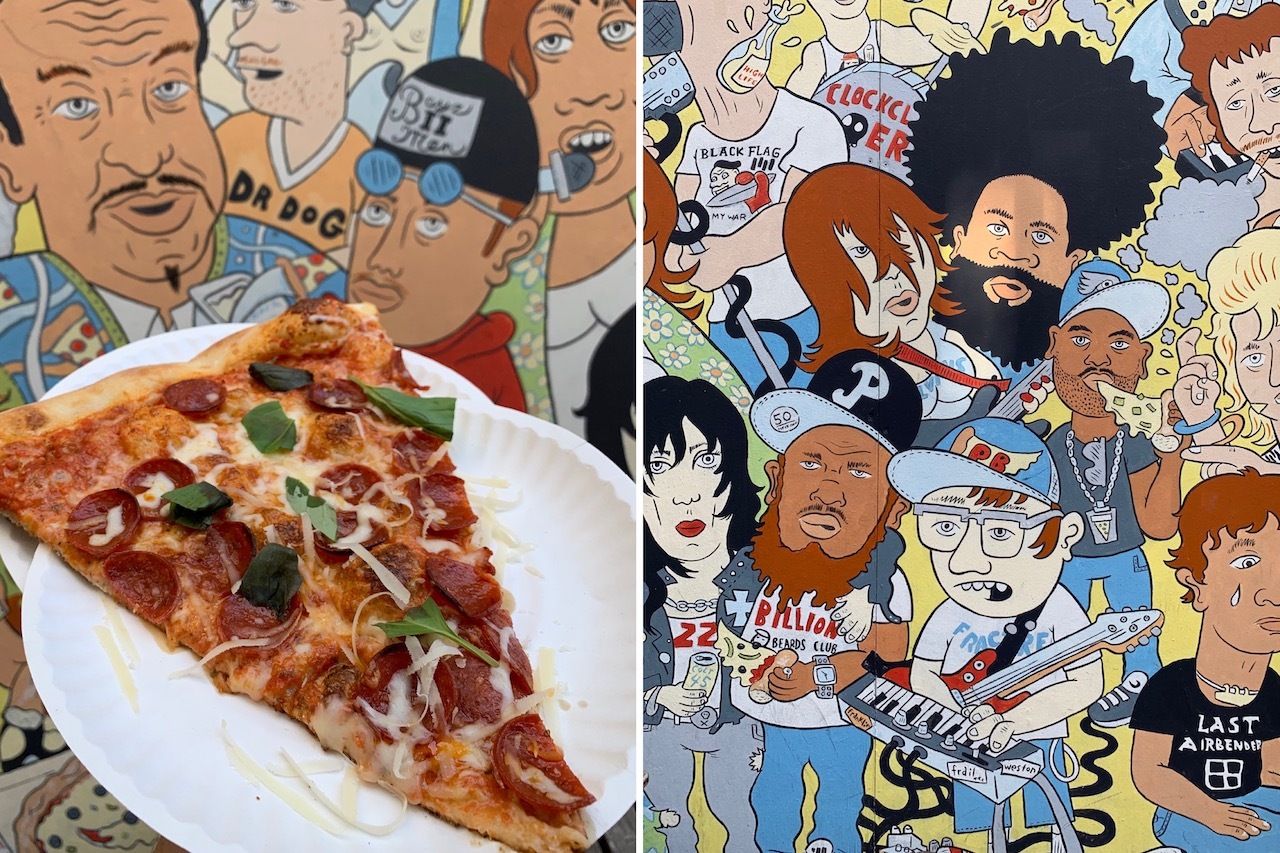 The food and record-holding collection isn’t the only draw. Pizza Brain also has a number of murals that idolize some of the people who’ve made Philly famous. I grabbed a piping hot slice of the red pie with mozzarella, aged provolone, grana padano, and fresh basil before heading outside to the back patio to check out the pizza-themed murals in person.

“The original cartoon mural consists of basically anyone who’s made it in Philly or is from Philly and made it,” Hunter says. To name a few: Ben Franklin, Betsy Ross, the characters from It’s Always Sunny in Philadelphia, the Pizza Brain team, Marc Vetri, Rocky, Broad Street Bullies, and Dead Milkmen. The artist behind the mural is Hawk Krall, who used to work for the Philadelphia Inquirer. The team noticed art Krall did for a hot dog company in town, so they hit him up, gave him a list of names they wanted on the mural, and let him create what he wanted with that information.

Next to Krall’s mural is mosaic art by Isaiah Zagar, the man behind the Magic Gardens in Philadelphia. “Isaiah heard about us and reached out to see if he could do a free mural for us,” Hunter says. “Of course, we were thrilled. He’s a legend in Philadelphia and he’s just a very sweet, wonderful person.” He came on two different occasions to complete the mural, and there’s a special, unplanned connection between the two murals.

“Serendipitously, where Krall’s mural ends, there is a little shout out to Isaiah Zagar,” explained Hunter. This then leads, unintentionally, into Isaiah Zagar’s actual mini, mosaic mural in the back of Pizza Brain.

Last, but certainly not least, Rushawn Stanley, a Pizza Brain employee, is also a local artist and completed the Pizza Brain mural in the back, full of bright colors, displaying their love of pizza for customers to enjoy.

“We want to be a destination for people, in addition to our friends’ kids neighborhood pizza shop,” Hunter says. “We’re a bunch of artists just trying to figure out how to do something that’s never been done before.”