Phoenix is a sprawling city. A zigzag of freeways loop through and around the desert metropolis, and it’s all too easy to spend more time driving, not to mention parking and fighting over directions, than doing. Sure, there’s Uber and Lyft, but all those rideshares can add up fast. Enter the Valley Metro Rail, a 26-mile ride that stretches from central Phoenix to Tempe and downtown Mesa, past hip hangouts, playful boutiques, rave-worthy restaurants, underground bars, and even a lake. The line takes around 85 minutes to ride from start to finish and costs only $4 for an all-day pass. So hop on and hit all the best stops, sans car.

It’s easy to get lost in Bookmans. The neighborhood book fixture carries shelf after shelf of used books, plus gifts, CDs, classic video games, magazines, manga, musical instruments, toys, and treasures. This is a place to browse, cozy up, catch a Super Smash Bros. tournament, and find that out-of-print cookbook you’ve been looking for. 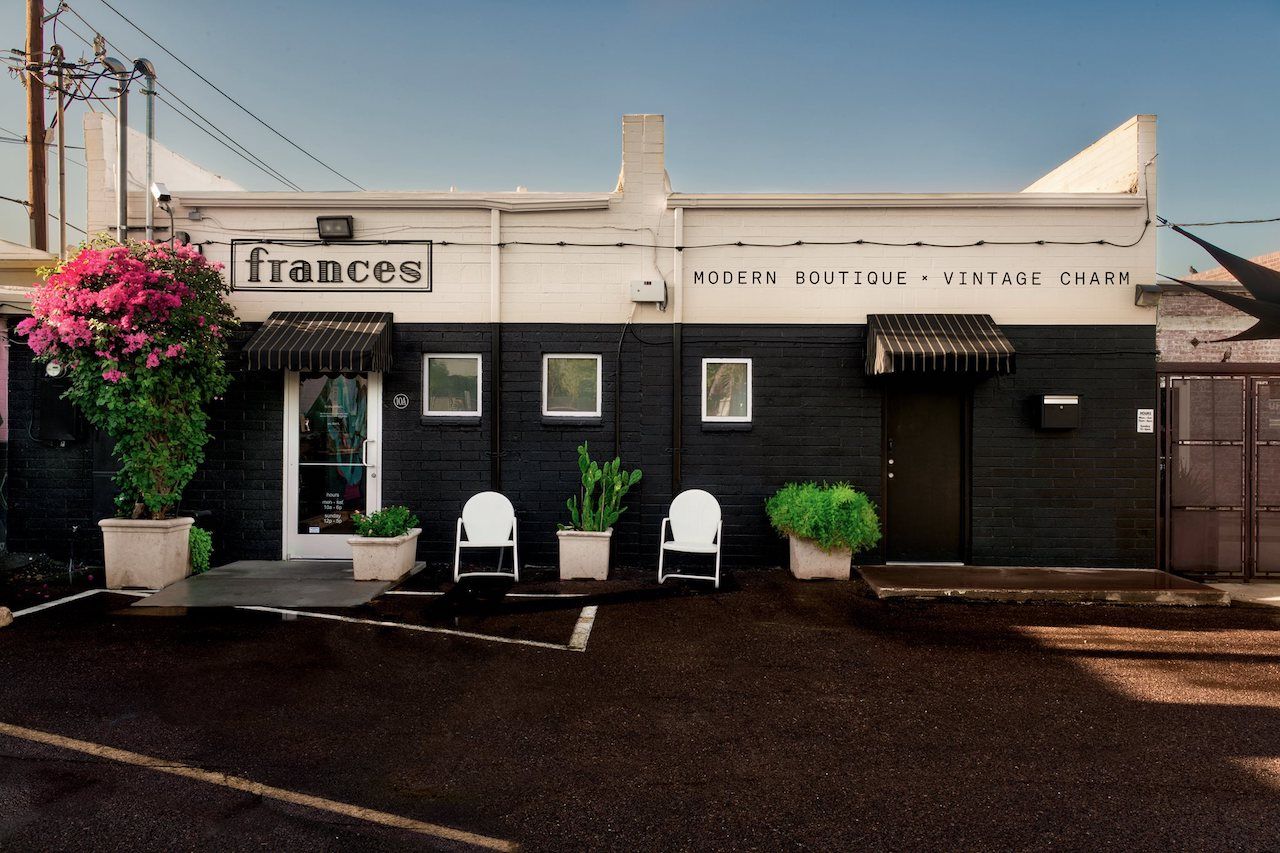 It’s not often you can score gin blossoms on vinyl and right next door find cactus earrings made by a local artist. Both Stinkweeds and Frances are finds, something that in-the-know locals seeking rare vinyl and one-of-a-kind gifts have known for decades. Stinkweeds is owned by Kimber Lanning (she opened in 1987), and Frances is owned by Georganne Bryant (as in mom of Aidy Bryant from SNL). Walk five minutes west to find Changing Hands, an indie bookstore with a bar inside.

This stop can serve as a home base of sorts for anyone planning on using the light rail as their main mode of transportation. Arrive Phoenix, a swanky boutique hotel with locations in Palm Springs and Austin, recently opened around the corner from the stop and comes complete with a popsicle stand, pool bar, and rooftop cocktail lounge.

Start at Pane Bianco, the Chris Bianco sandwich shop that makes some of the best sandwiches in Phoenix and perhaps the United States. Get the Mozzarella, which is made with housemade mozzarella, heirloom tomatoes, and wood-fired focaccia. Then go next door to Lux Central, a hip coffee outpost with arguably the best beans and vibe in town. Open 6:00 AM to midnight, there are plenty of plugs and people watching, plus free refills on drip coffee. 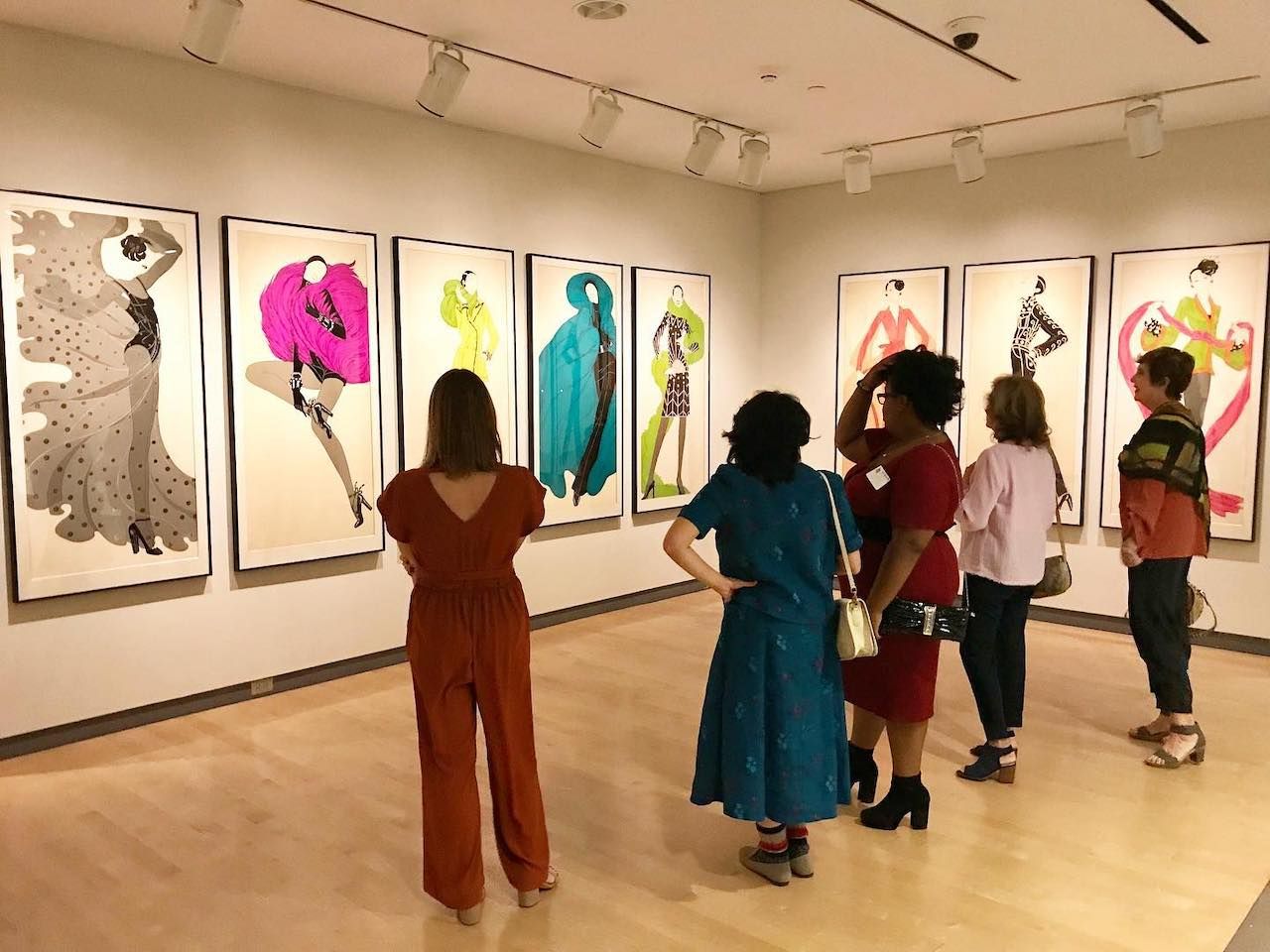 It’s hard to miss the Phoenix Art Museum thanks to the caged, giant red T-Rex out front. Inside the modern, sweeping space, you’ll find art by Frida Kahlo and Georgia O’Keeffe, as well as the iconic “George Washington” portrait by Gilbert Stuart. The ultimate must-see, though, is Yayoi Kusama’s “You Who are Getting Obliterated in the Dancing Swarm of Fireflies,” an infinity room of LED lights that feels like an optical dreamscape of floating stars. There are more than 18,000 artworks in all, including a sculpture garden, Western American wing, and extensive fashion collection, making it the largest art museum in the Southwest for visual art.

5. Get the Frank Sinatra treatment at Durant’s.

Durant’s is a restaurant that was cool before it was cool to be cool. Decked out in plush red wallpaper and vintage banquette booths with bow-tied servers and moody lighting, the Rat Pack-era steakhouse is perfect for canoodling and martini sipping. Order up Oysters Rockefeller and a perfectly cooked filet mignon or 48-ounce porterhouse and savor the artful nostalgia. The entrance through the backdoor kitchen only adds to the old-school allure. 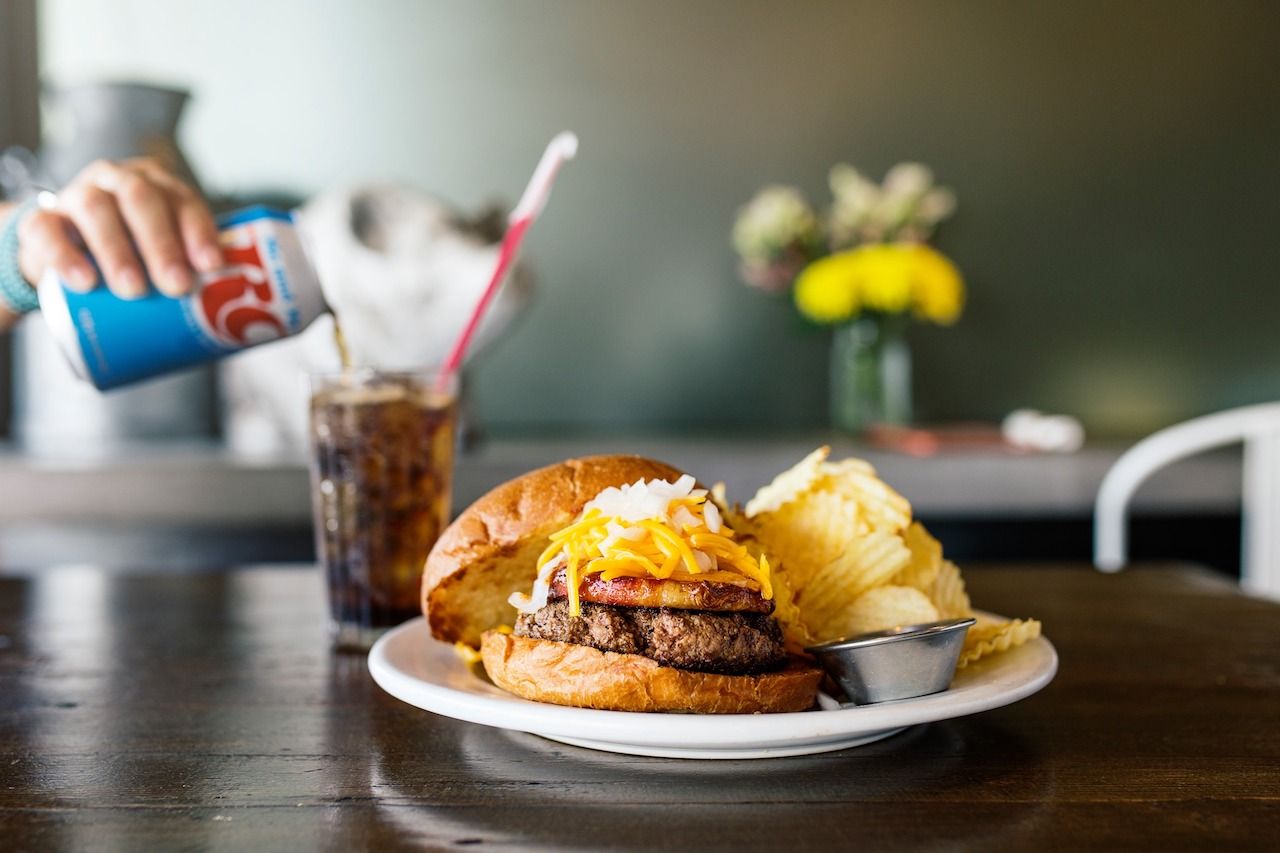 Breakfast is definitely the most important meal of the day at Matt’s Big Breakfast. It’s not a dainty, avocado toast kind of place. The diner-style menu is loaded with griddle cakes, salami scrambles, thick-cut bacon, and waffles with real maple syrup. MBB has been flipping, frying, and scrambling since 2004, and the 50-seat, counter-style joint still draws a huge crowd for breakfast and lunch. After eating, stroll Roosevelt Row, an artsy stretch of coffee shops, restaurants, indie galleries, and outdoor murals that runs along Roosevelt Street from 7th Avenue to 7th Street.

For inventive cocktails in a swanky setting, Bitter & Twisted Cocktail Parlor is panache personified. You can order a classic like an old fashioned, but flip through the prolific Book o’ Cocktails, and more than likely, you’ll be sipping something original that’s a mix of bitters, tonics, infused spirits, and fresh herbs. Valley Bar, an underground speakeasy that’s equal parts dive and chic, hosts everything from poetry readings to punk bands. Speaking of speakeasies, it’s easy to miss Melinda’s Alley, a weekends-only basement bar below the Renaissance Phoenix Downtown Hotel. The entrance is north of the hotel in the alleyway between Central Avenue and First Street. Just look for the Melinda mural and red light bulb. One stop west is The Van Buren, an 1,800-capacity music hall with an impressive lineup of headliners, including Billie Eilish, Lizzo, Dua Lipa, and Sting. 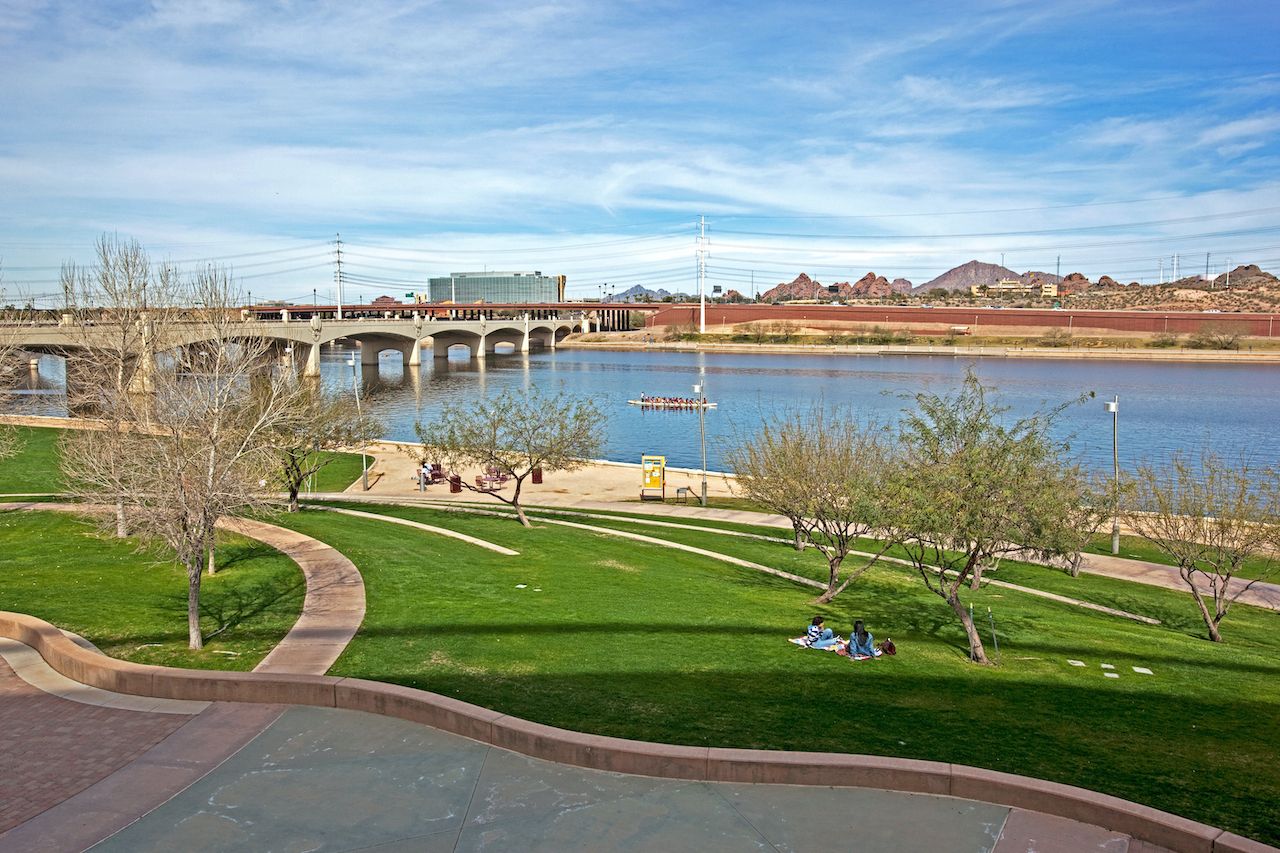 Phoenix isn’t all mountains and dust. Hop on the light rail eastbound for Tempe Town Lake, a reservoir of water and fun with five miles of paved path, sand volleyball courts, and plenty of public art. Rent a bike, kayak, or standup paddleboard if you want to get on the water, or stay dry and stroll the many bridges. The suspension pedestrian bridge looks like a sculpture while the Tempe Town Lake Bridge shines bright at night with thousands of colorful lights.

9. Take in the views at Sun Devil Stadium.

Sun Devil Stadium is literally carved into the landscape. One of the most beautiful collegiate stadiums in the nation, Arizona State University’s outdoor football field is built between two mountain buttes, so it becomes one with the desert skyline. Catch an ASU game or just catch a look at the architectural wonder. It’s a head-turner.

10. Dive into science and find the old Phoenix at Heritage Square. 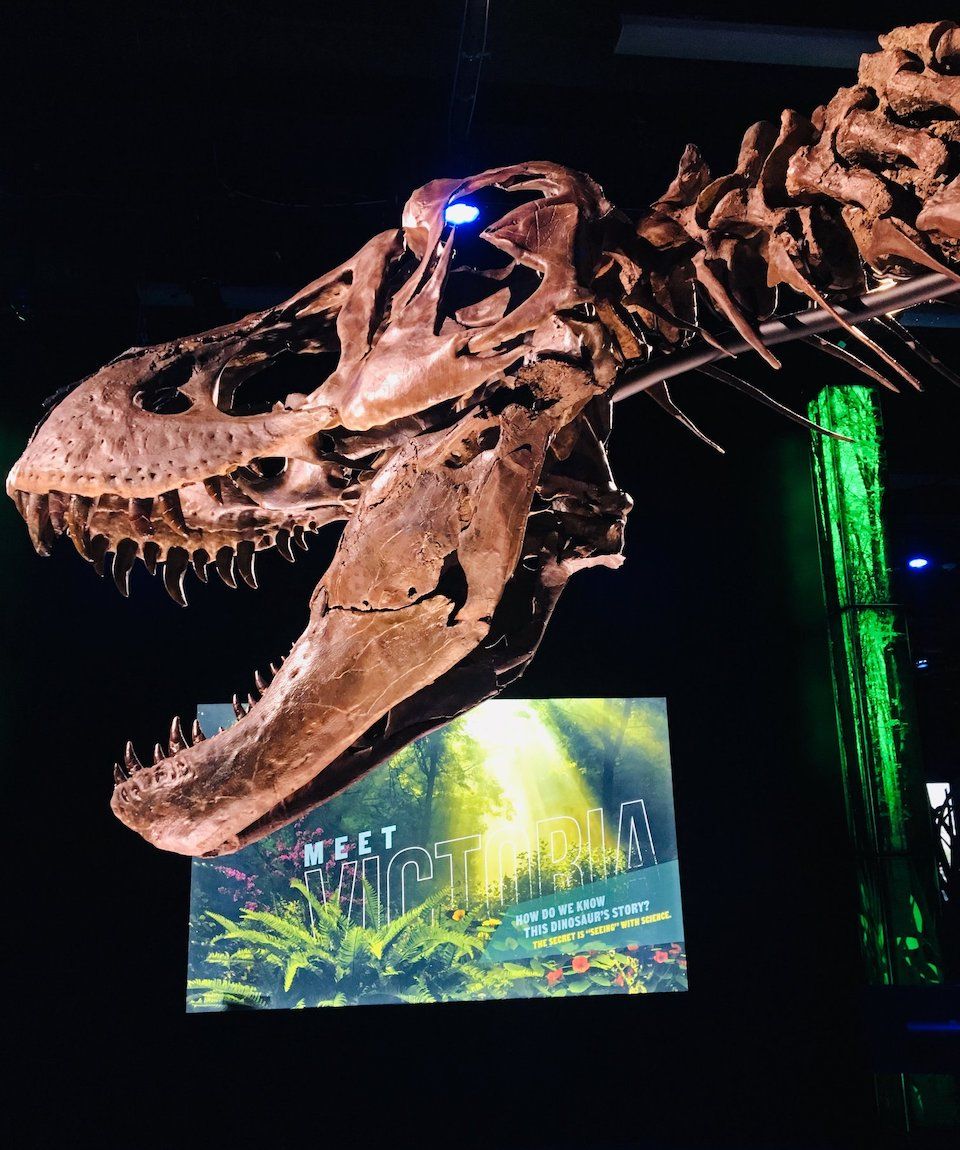 History and science combine at Heritage Square. On one side you have the Arizona Science Center, an interactive, hands-on museum where you can tour the solar system in a state-of-the-art planetarium and feel what it’s like to be in the middle of a hurricane, tornado, or wildfire in the “Forces of Nature” Immersion Theater. Nearby, you have the oldest-remaining residential block in Phoenix with Pizzeria Bianco, Chris Bianco’s famous pizza joint; Bar Bianco for a drink while you wait; Nobuo at Teeter House for unforgettable Japanese food; and The Rosson House, a Queen Ann Victorian that dates back to 1895.

Stroll downtown Mesa, a once-sleepy farm town that’s stepping up its food and beverage game. Worth Takeaway on Main Street serves up stellar sandwiches, like the Crispy Chicken, a deep-fried slab of seasoned chicken topped with honey sriracha sauce, pickles, and local bibb lettuce. The side of housemade potato chips only adds to its worthiness. Next door’s Oro Brewery Company brews up inventive nano-brews like Give Peat a Chance, a smoky stout with a hint of chocolate. Desert Eagle Brewing Company is also worth a stop for its Dark Cherry Blonde Ale and Peanut Butter Porter. Keep walking east, past the historic Nile Theatre and antique stores, to República Empanada, a restaurant that specializes in, you guessed it, empanadas. Save room for the Dizzy Fig, which is a local fig, cheese, and dulce-de-leche-oozing dessert empanada.

Restaurants + BarsPhoenix, Arizona, Is a Sleeper Pizza Capital of the US
Tagged
Train Travel Phoenix, AZ, United States
What did you think of this story?
Meh
Good
Awesome