The Ireland of our dreams, the one that’s often pictured in rom-coms, is rural. And even though adorable thatched cottages dotting green, rolling hills, or brightly painted houses by the wild Atlantic shore are overly used in televised fictional tales, there’s some truth to them. Dublin, Belfast, Galway, and Cork are all modern, cosmopolitan cities where you’ll never be stuck in a cliché sheep traffic jam, but outside of the urban areas, you’ll encounter some of the rustic aesthetic and dramatic, craggy landscapes you’ve grown to expect. The seven villages listed below will satisfy your needs if what you’re looking for is a pretty, scenic, and sometimes isolated place to explore in the Republic of Ireland, as well as in Northern Ireland. 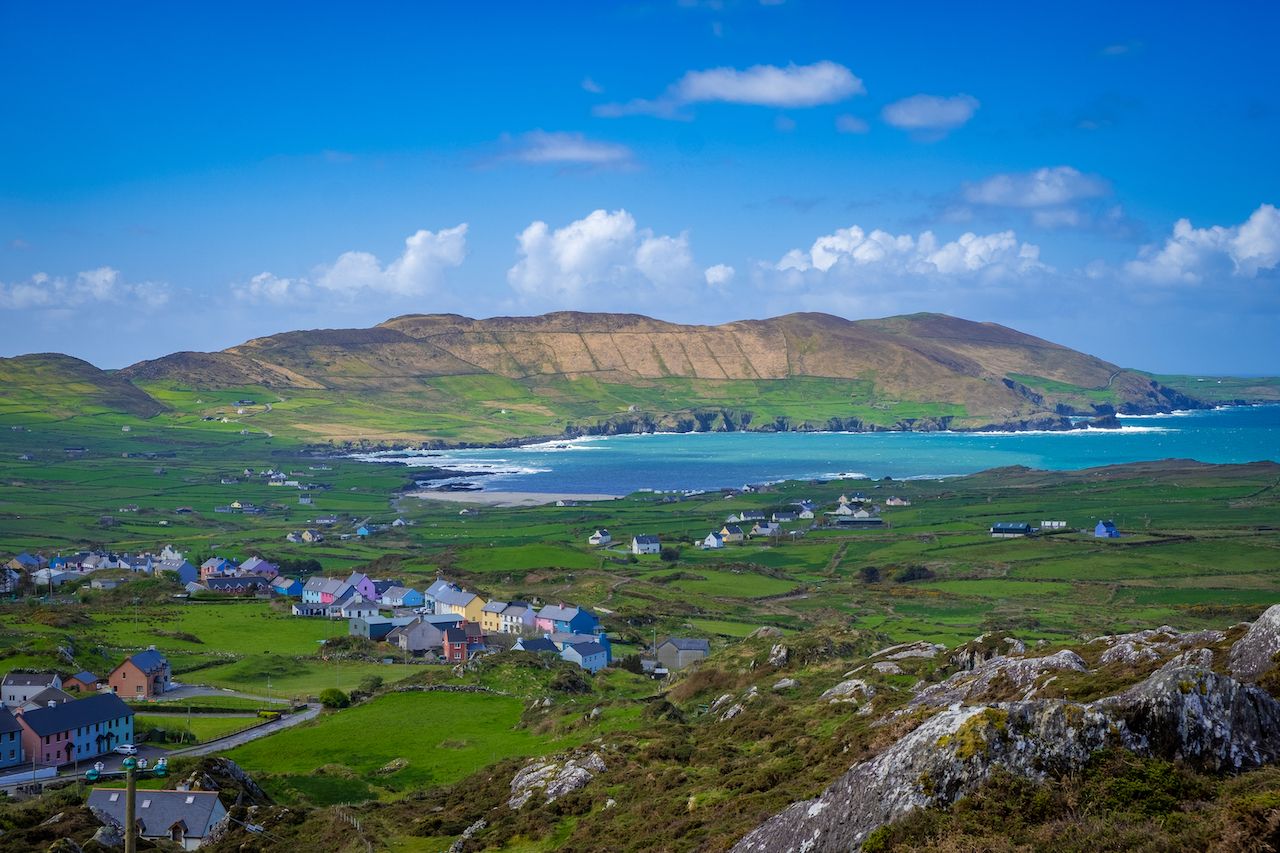 County Cork has no shortage of beautiful towns — Cobh and Kinsale alone attract a lot of visitors for their vibrantly painted houses and seaside views — but if you want to go somewhere smaller, quieter, and more remote, head to the Beara Peninsula in West Cork. Although part of the route of the extremely popular Wild Atlantic Way, Beara remains less visited than other coastal areas, so you can walk or cycle the Beara Way — a long-distance walking and cycling route — and check out the many archaeological sites of the region in peace and tranquility.

Allihies, the last village at the end of the peninsula, is a great (and isolated) base to explore the area, and it’s very easy on the eyes with colorful houses, rolling green hills, and views of the Atlantic Ocean that will leave you weak in the knees. After a long walk on Garnish Beach or a hike around the former copper mining sites around the village, make your way to the bright red O’Neill’s Bar and Restaurant for a much-deserved plate of home-cooked food. Come in June to hear traditional Irish music at the annual Michael O’Dwyer Festival. 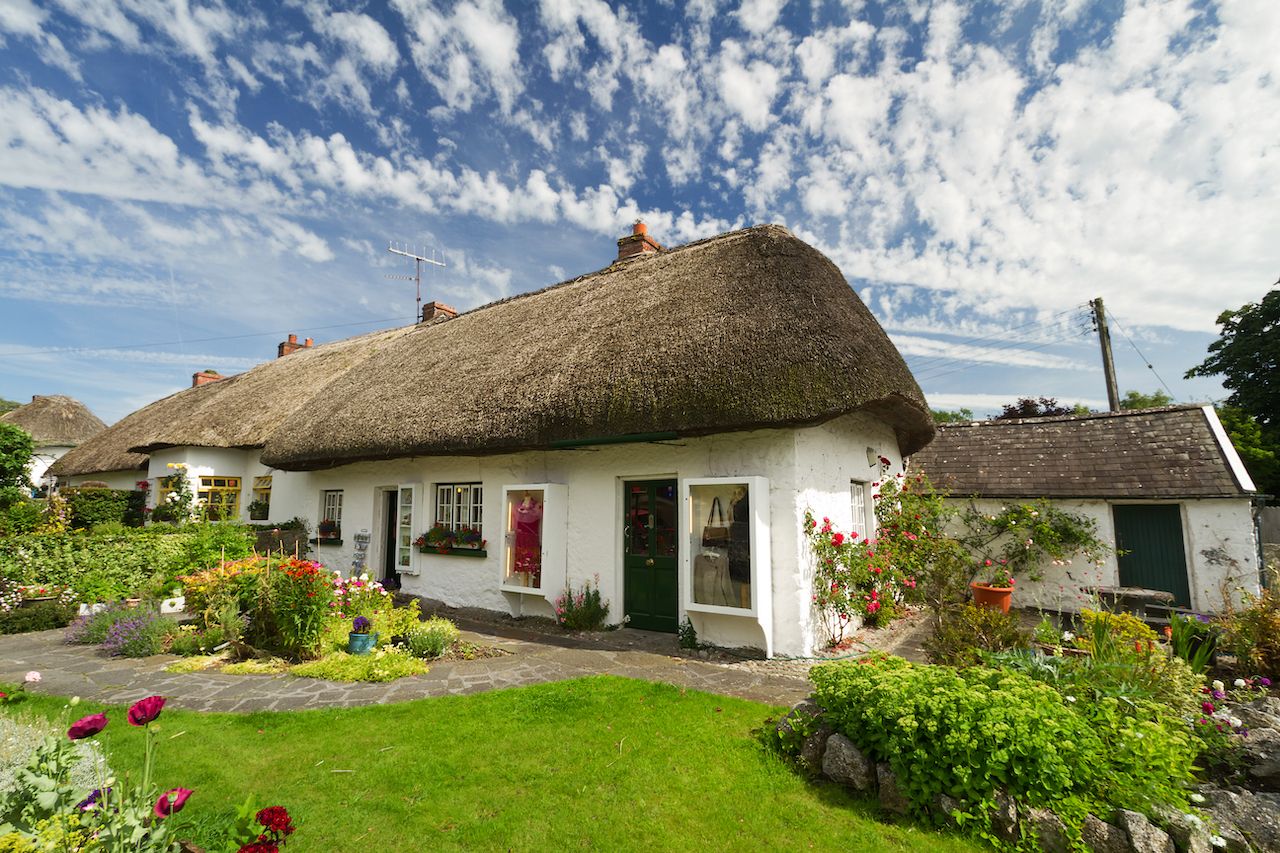 Having been dubbed “Ireland’s prettiest village” for several decades, and having been listed as a Heritage Town of Ireland, 13th-century Adare is a well-known tourist attraction, so if you’re looking for isolation, look elsewhere. That said, if you don’t mind running into other visitors, walking around the flower-filled village, checking out the beautiful thatched cottages, and chowing down on delicious pastries in one the postcard-perfect tearooms are great ways to spend the day.

The many castles surrounding the village (Adare Castle, King John’s Castle, and Bunratty Castles) and the three historic churches in Adare (The Holy Trinity Catholic Church, St. Nicholas Church of Ireland, and the Adare Methodist Church) are worth a visit, too. There are several B&Bs and hotels for those who wish to stay in this storybook location, but if you want something a little more upscale, splurge and stay at the magnificent Adare Manor, just outside of the village. 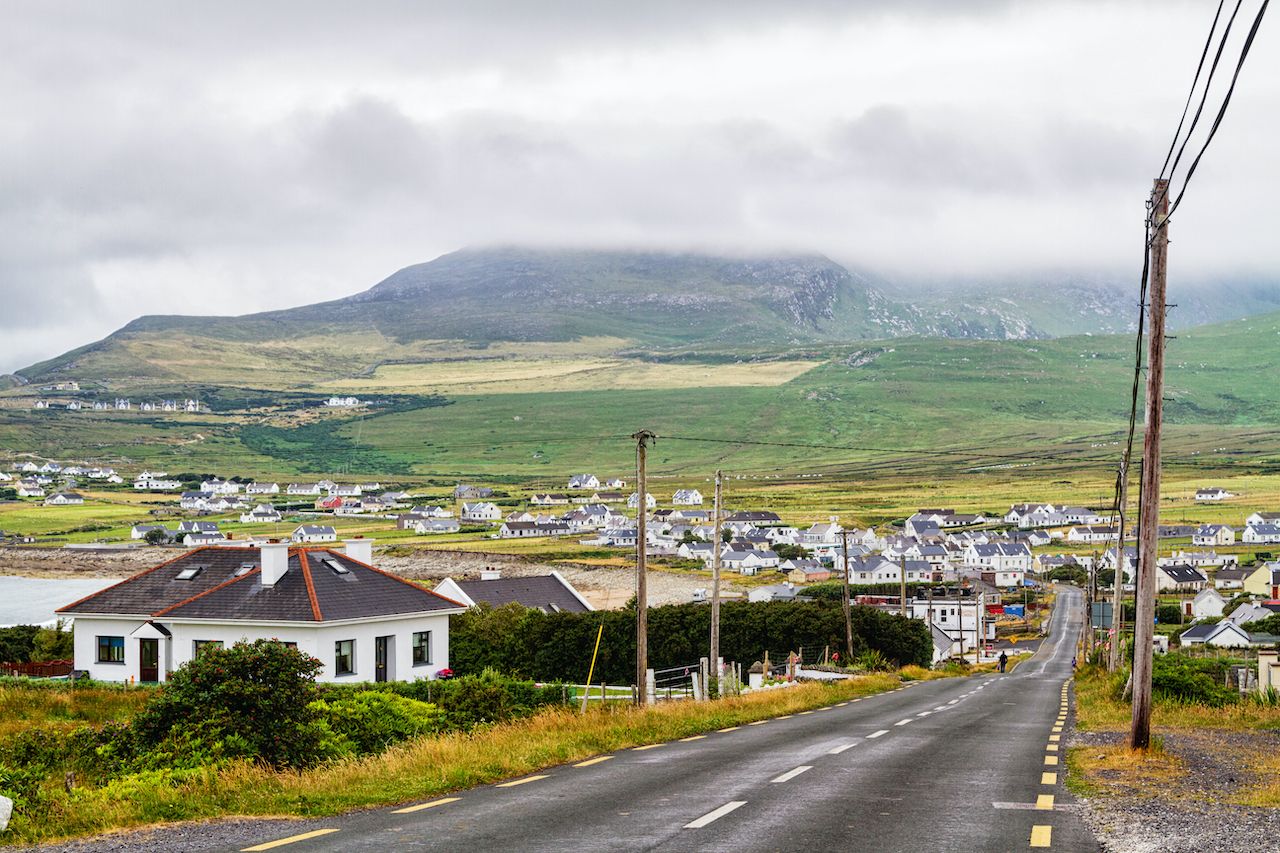 The biggest of all the Irish islands, Achill island is all mountains, cliffs, beaches, and bog. Its location off the coast of County Mayo in the Atlantic makes it an extremely scenic and windy spot, attracting outdoor enthusiasts, especially water sports lovers who congregate at Trawmore Strand beach to surf, windsurf, kitesurf, and kayak. The striking beauty of the island’s wilderness — and the fact that it’s easily accessible from the mainland thanks to a bridge — makes it a popular destination, especially in the summer when visitors take full advantage of the many safe sandy beaches. Before and after the summer rush, Achill is far less crowded, and it’s the perfect time to check out the fishing village of Dooagh on the western side of the island.

Located along a bay with unobstructed views of the ocean, the village may not be filled with quaint, historical houses, but its natural surroundings more than make up for it. There are a couple of B&Bs and some self-catering accommodations available for those who want to take the time to enjoy the incomparable landscape. Note that the bay has a mysterious here-and-away sandy beach that appears and disappears with storms — it was washed away in 1984, came back in 2017, and left again in 2019. For a spectacular permanent beach nearby (fewer than 3.5 miles away), visit wonderfully wild and green Keem Bay. 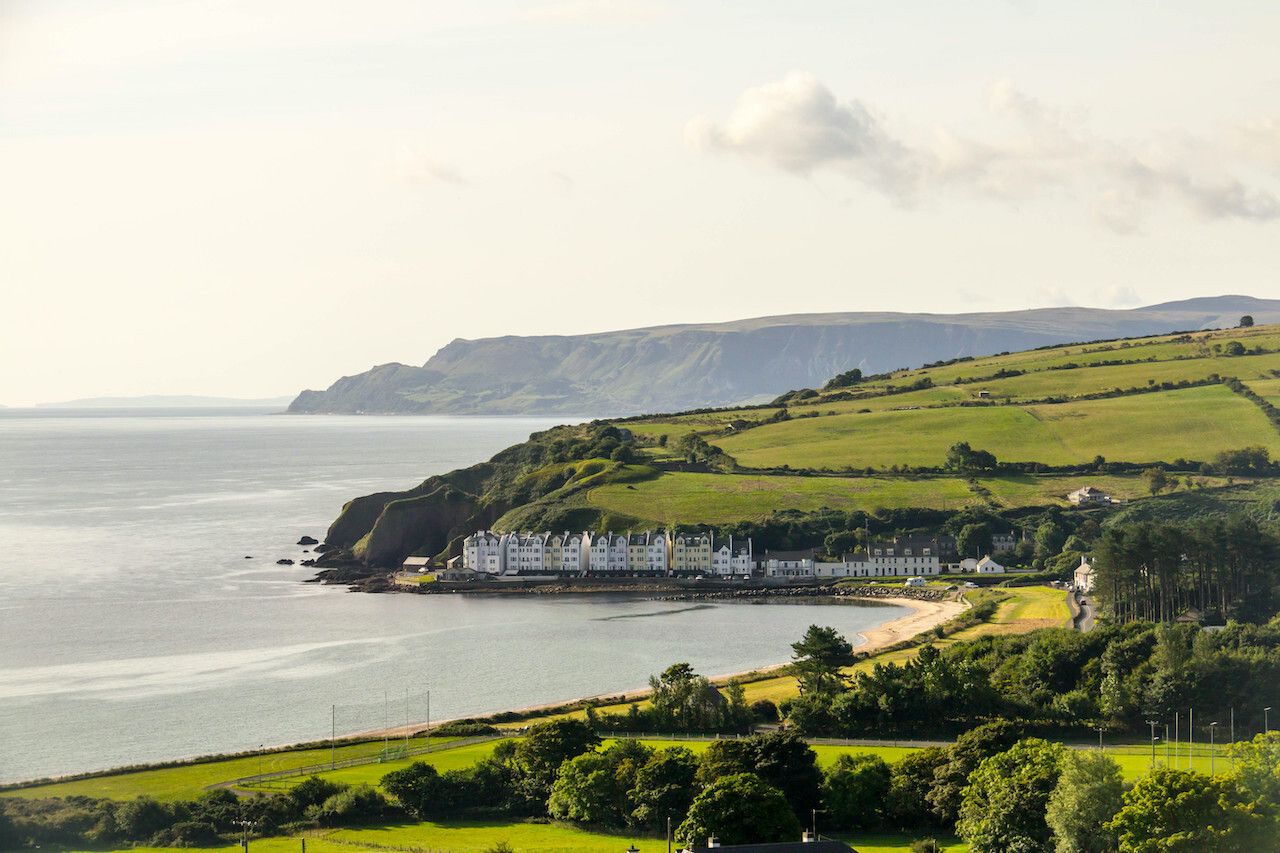 Located on the north coast of Ireland, the coastal village of Cushendun looks straight towards Scotland. In fact, it is only 15 miles from the Scottish shores. The village is a conservation area and has been protected by the National Trust since 1954 for its beauty and architecture of whitewashed cottages, so it’s a safe bet for those who want to be wowed.

Although you could spend days looking at the views of the North Channel and the verdant hills, go check out the Red Caves (used as the background for The Stormlands in Games of Thrones) fewer than a 10-minute walk south from the village’s center. The ruins of 14th-century Castle Carra, only 15 minutes on foot north of the village, is also worth visiting, along with the Bronze Age standing stones nearby. There are plenty of accommodation options in and around the village, but make sure to pick one with a view. For drinks, good food, and fun quiz nights, the village pub, Mary McBride’s is the place to be. 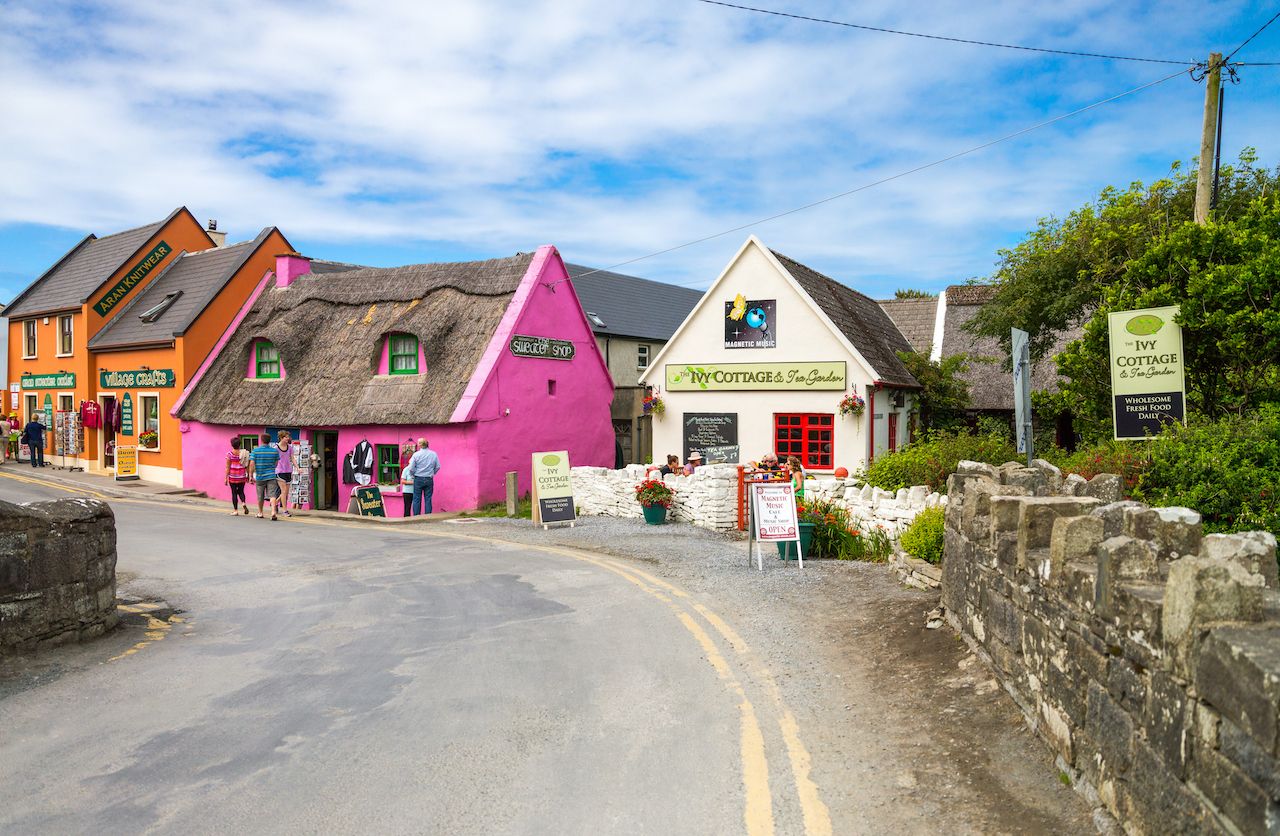 Doolin is far from being an off-the-beaten-track, underrated village, but if you don’t mind sharing the sight of adorable houses and views of the dramatic landscapes, don’t pass it. Because it’s the getaway for the Aran Islands, and it’s located fewer than 4.5 miles north of the Cliffs of Moher on the main coastal road, there’s a lot of tourist traffic in Doolin, but instead of just passing through, book a bed for the night and explore a little further — if only just for the spectacular sunset you’ll get from Doolin Pier or Killilagh Church. There’s traditional Irish music to be heard in the pubs at night, but if you want more, come in June during the Doolin Folk Festival. Don’t forget to visit 16th-century Doonagore Castle, just a 25-minute walk south from the village, and Doolin cave and its impressive 23-foot long stalactite. 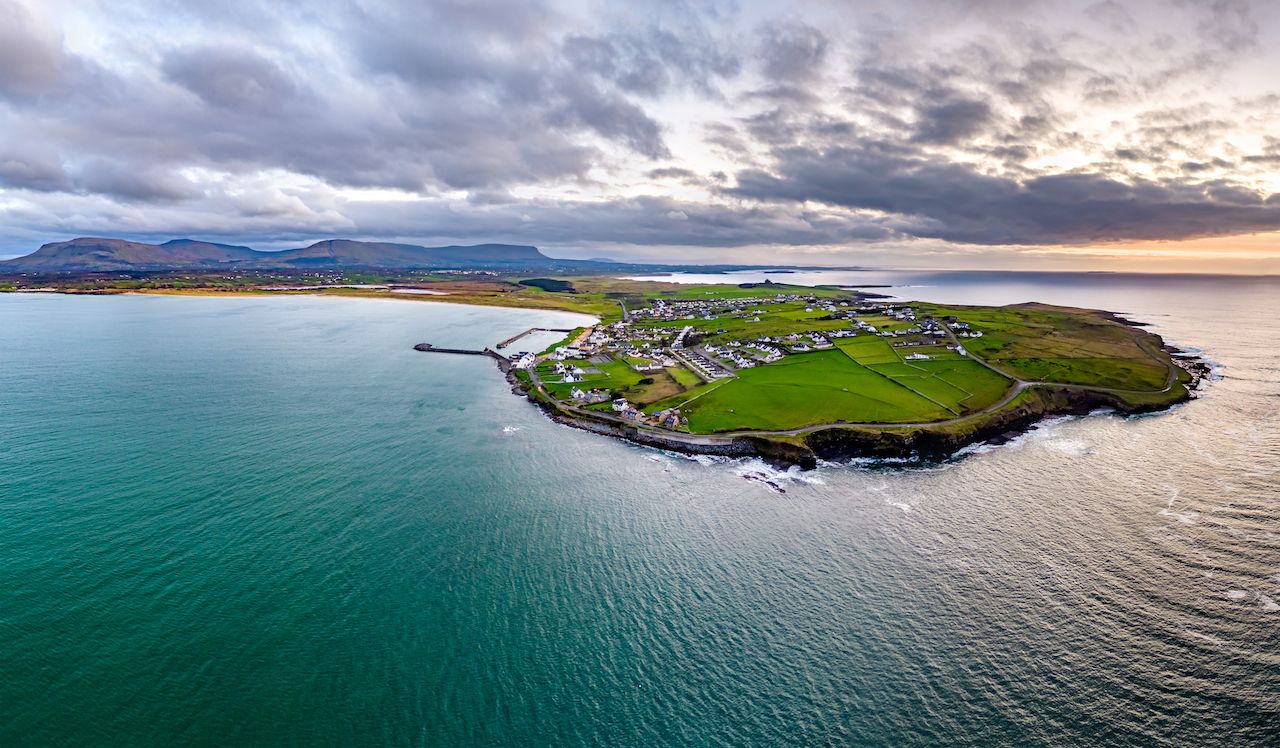 The village of Mullaghmore and its 19th-century harbor are located on the Mullaghmore peninsula that juts out into the Atlantic, making the area as picturesque as could be. The village is known as one of the best surfing spots in the world, and beautiful Mullaghmore Beach attracts many visitors, especially in the summer months. If you’re not into water sports, go check out the spectacular 19th-century Classiebawn Castle, just 1.3 miles out of the village. The walk to the castle takes less than 30 minutes and delivers a fair share of striking views.

If you want to put your hiking skills to the test, hire a guide and hit the looped trail on Benbulben, the dramatic limestone formation that dominates the landscape. If time is not an issue, take a boat to mystical and uninhabited Inishmurray Island (now a wildlife sanctuary), only one hour away from the mainland, to see seabirds and the ruins of a sixth-century monastery settlement. There are plenty of accommodations, restaurants, and cafés in town for visitors to stay and visit the area thoroughly. 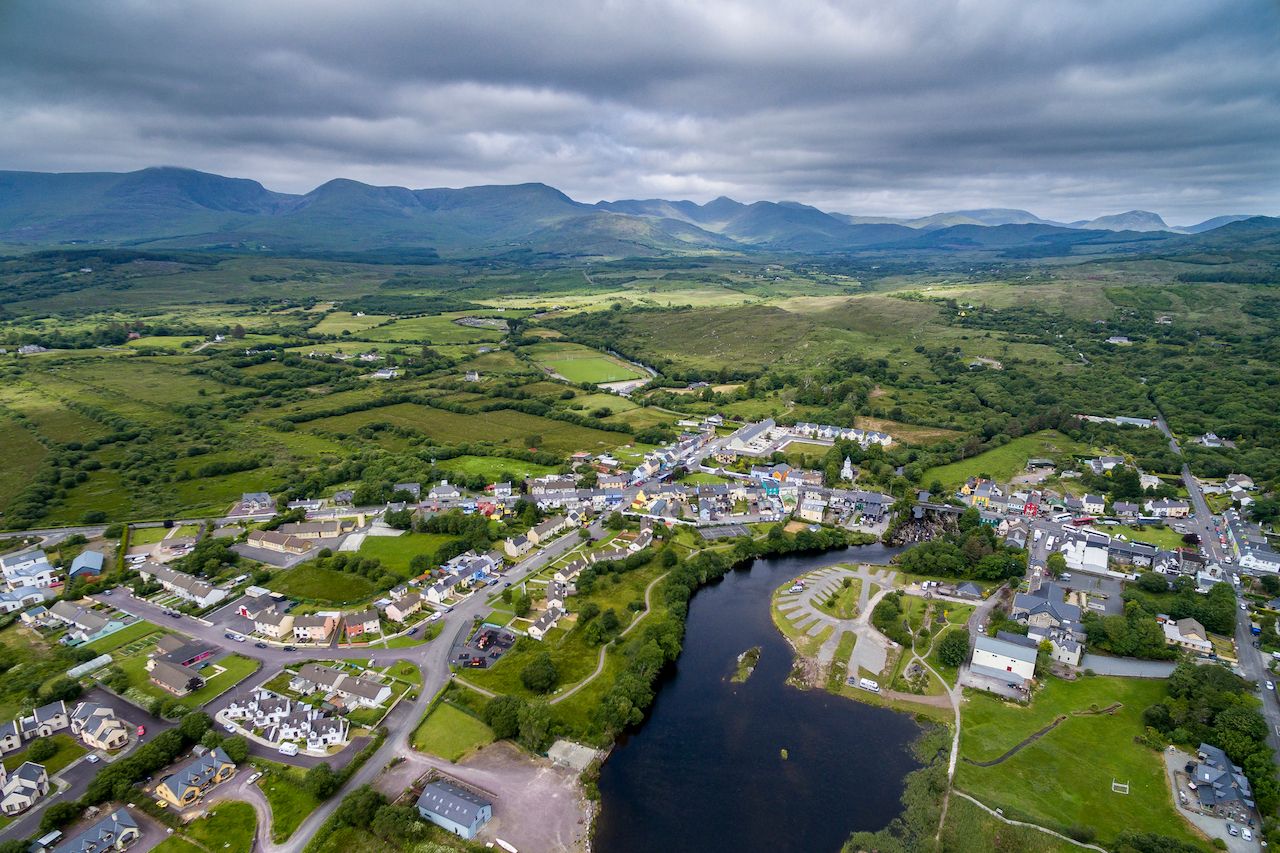 The village of Sneem is located on the Ring of Kerry, a 105-mile route that encapsulates the best of the county, and is part of Wild Atlantic Way tourist trail, so it is not an under-the-radar spot — but it’s not gathering huge crowds either. The Sneem River that runs through the town and the Kerry mountains in the background set the tone for this cute village filled with brightly painted houses. Follow the sculpture trail around town to see art pieces from all over the globe, or step up your game and lace up your hiking boots to walk parts (or the entirety) of the Kerry Way, a long-distance walking trail that takes you around some of most beautiful natural spots in the area for over 120 miles. For the less-ambitious visitors, there are other shorter and less difficult walks from Sneem, like the Fermoyle Loop Walk and the Lomanagh Loop Walk.