Despite the changeable weather, Ireland is a great destination for those who like to spend time outdoors rather than in pubs or whiskey distilleries. In recent years, the country has developed cycling routes such as the Great Western Greenway, which follows the Atlantic coast along Clew Bay in County Mayo; surfers flock to exhilarating waves in towns like Bundoran, off the northwest coast; and there are hiking trails to tackle in nearly every part of the island.

Carrauntoohil (pronounced car-awn-too-hill) is the country’s highest peak and biggest challenge for hiking enthusiasts. With multiple routes to choose from and difficult conditions at any time of year, climbing Carrauntoohil is a challenge — but it’s very much worth it. And since Ireland’s outdoor adventure opportunities are still relatively under the radar for international visitors, you could even have the whole place all to yourself. 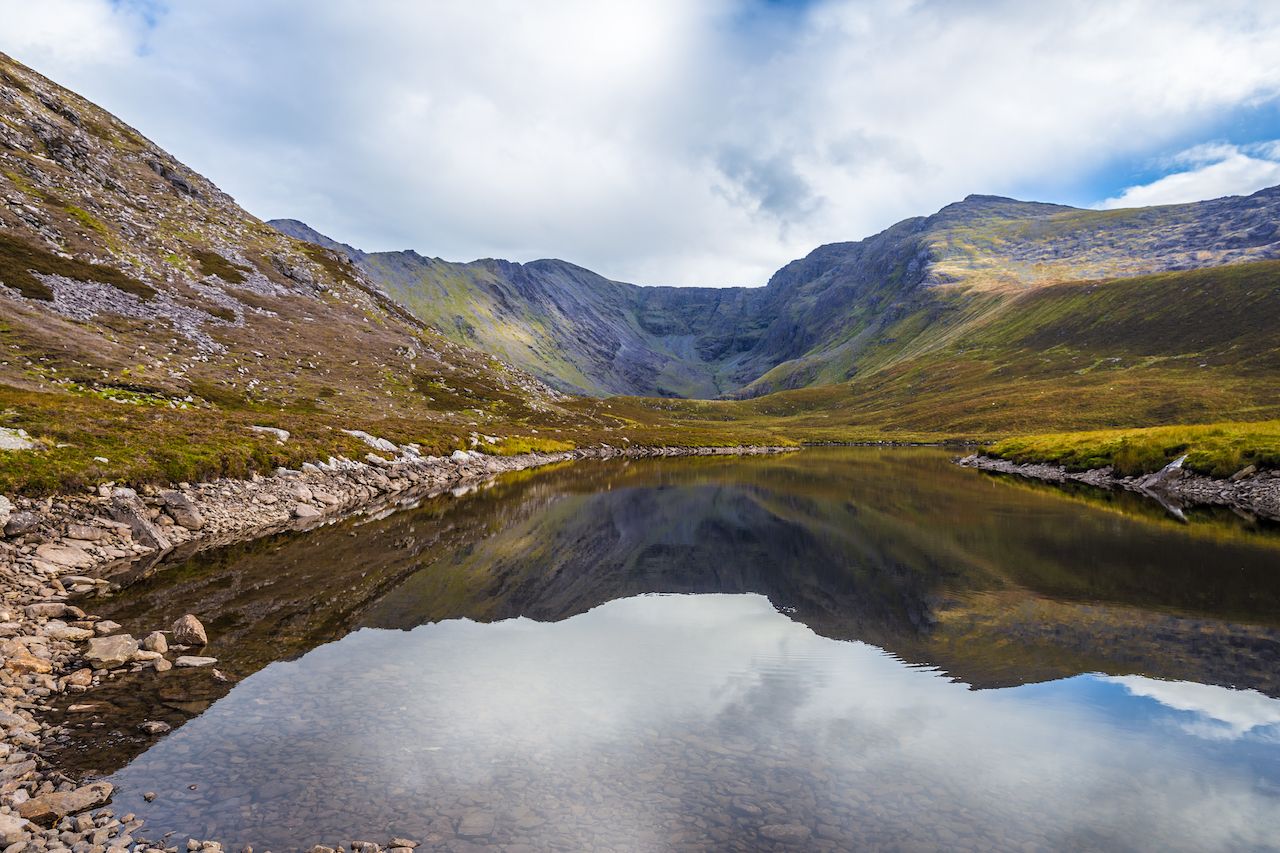 “Carrauntoohil” is an Anglicised translation from the mountain’s Gaelic name Corrán Tuathail, which means “Tuathail’s Sickle.” (There’s no definitive answer on who Tuathail was, but it could refer to the family name “O’Toole” which translates to “Tuathail” in Gaelic.) Its peak reaches 3,407 feet, making it the tallest point in Ireland’s highest mountain range, the MacGillycuddy Reeks. This mountainous region stretches across the center of County Kerry in the southwest corner of the country, with Killarney being the nearest major town from the start of most trails (11 miles east).

The mountain range and surrounding area is privately owned by four local families. They generously allow over 25,000 hikers a year to explore their land freely, so be respectful and follow the rules. Dogs are not permitted on any of the routes, and hikers are advised against constructing or adding to cairns (piles of rocks serving as route markers). As per usual, obey any signs you see and leave only footprints behind. 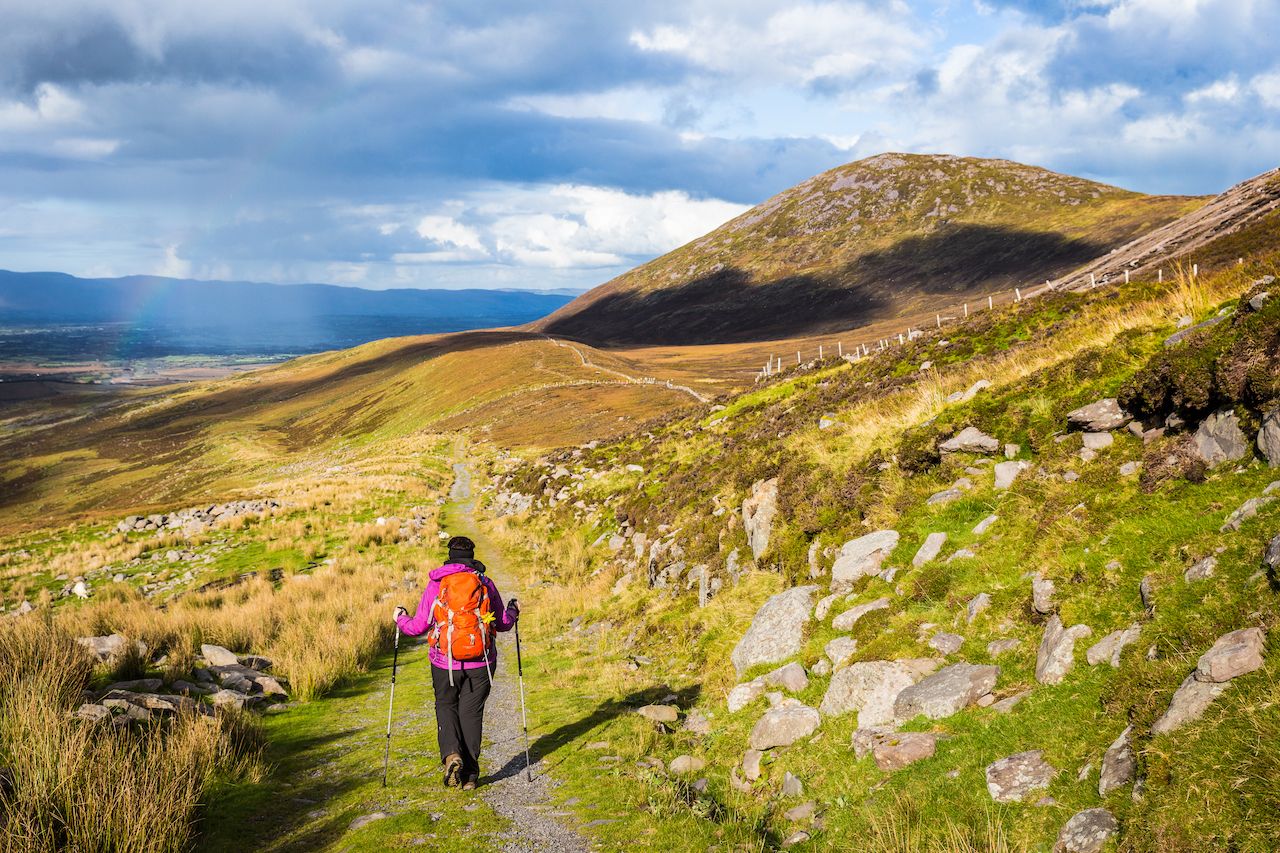 Carrauntoohil is not suitable for beginners, and hiking with a guide is strongly recommended for all climbers. According to Kerry Mountain Rescue, three out of every four fatal mountain accidents in the MacGillycuddy Reeks have been solo walkers or walkers who became separated from a group. If you really want to tackle it independently, you should have advanced mountaineering skills and be comfortable hiking challenging peaks in poor conditions and minimal visibility.

All trails start from Cronin’s Yard, and all of them end with a very steep, very rocky ascent to the summit. In between, there’s everything from knife-edge ridges and exposed cliff tops to hidden waterfalls. Although Carrauntoohil is not an easy climb, it is a very rewarding one — you’ll get the best views of the most beautiful part of the country, and you can take a dip in Ireland’s highest lake (weather permitting). 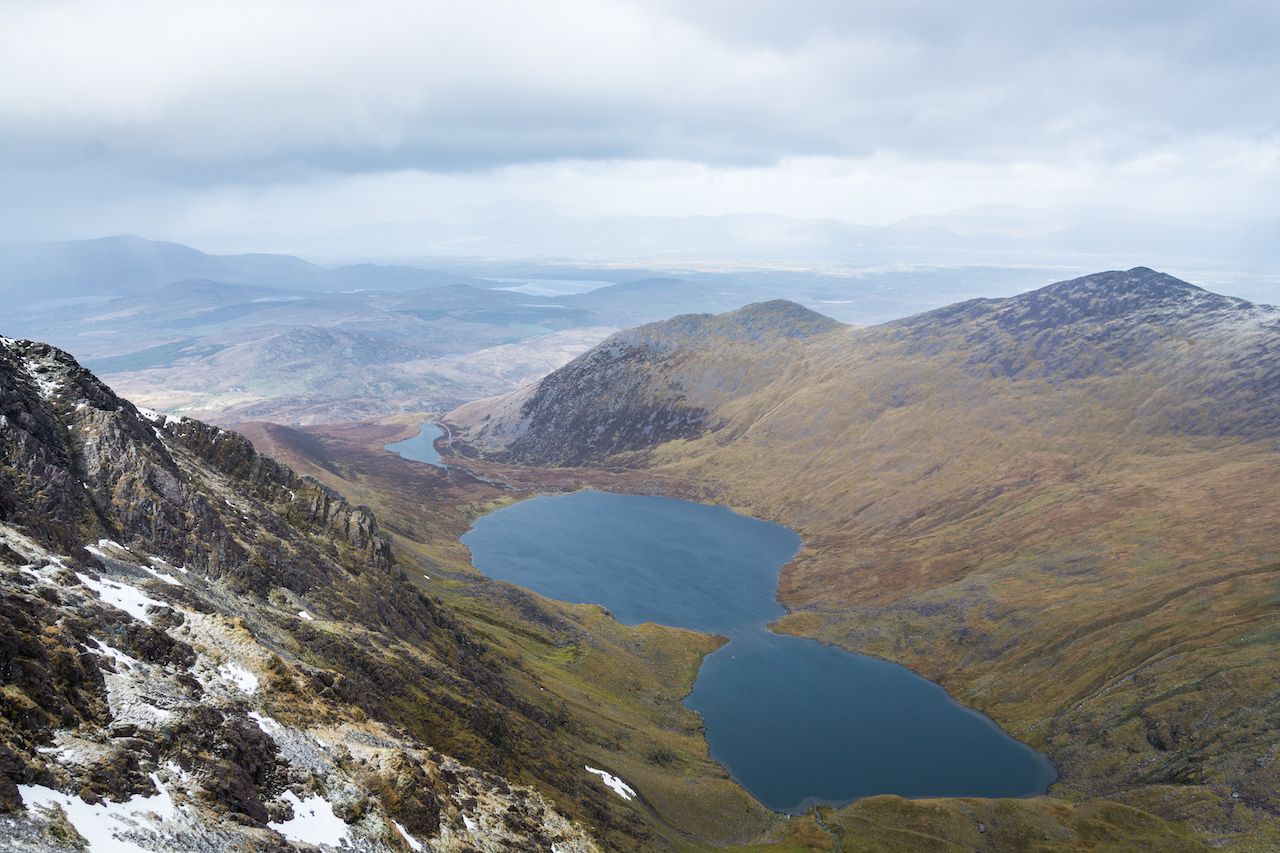 All the routes that lead to the summit of Carrauntoohil offer different challenges. The three most common routes are:

Once the most popular route, this six-hour round trip has now become badly eroded with lots of loose scree and is not to be attempted in adverse conditions. After a short ascent, the path crosses a ford, then fades into waterlogged ground before reaching a steep gully. Don’t be tempted to walk on the flanking slopes — it’s very easy to lose your footing there. At the top of the gully, the route veers right, and the track to the summit reappears. It branches off in several places, so in poor visibility beware of heading too far left or right into dangerous ground.

A slightly safer alternative, this route takes six hours for a round trip and offers formidable views of Carrauntoohil’s northeast face. Instead of crossing the ford, this trail runs parallel to the river and passes two lakes and some short rocky steps, which require scrambling up to the first level. From there, it’s a scree slope up to the second level and a hidden waterfall, then up another slope to the third level where the highest lake in Ireland (and the final slope to the summit) awaits. The lake is perfectly safe for swimming, but since the water temperature is cold year-round it may not be a good idea outside of the summer months.

This is the longest but most straightforward route, taking between six and seven hours for a round trip. It starts on a concrete track, getting steeper before bearing right and heading towards a lake. Open ground rises to a spur and a narrow cliff top, which requires extra care when crossing. Hikers will then traverse the three summits of Caher (the neighboring mountain) before descending slightly to some relatively easy open ground. This will take you on a slower ascent right the way to Carrauntoohil’s summit.

What you’ll see en route and from the summit 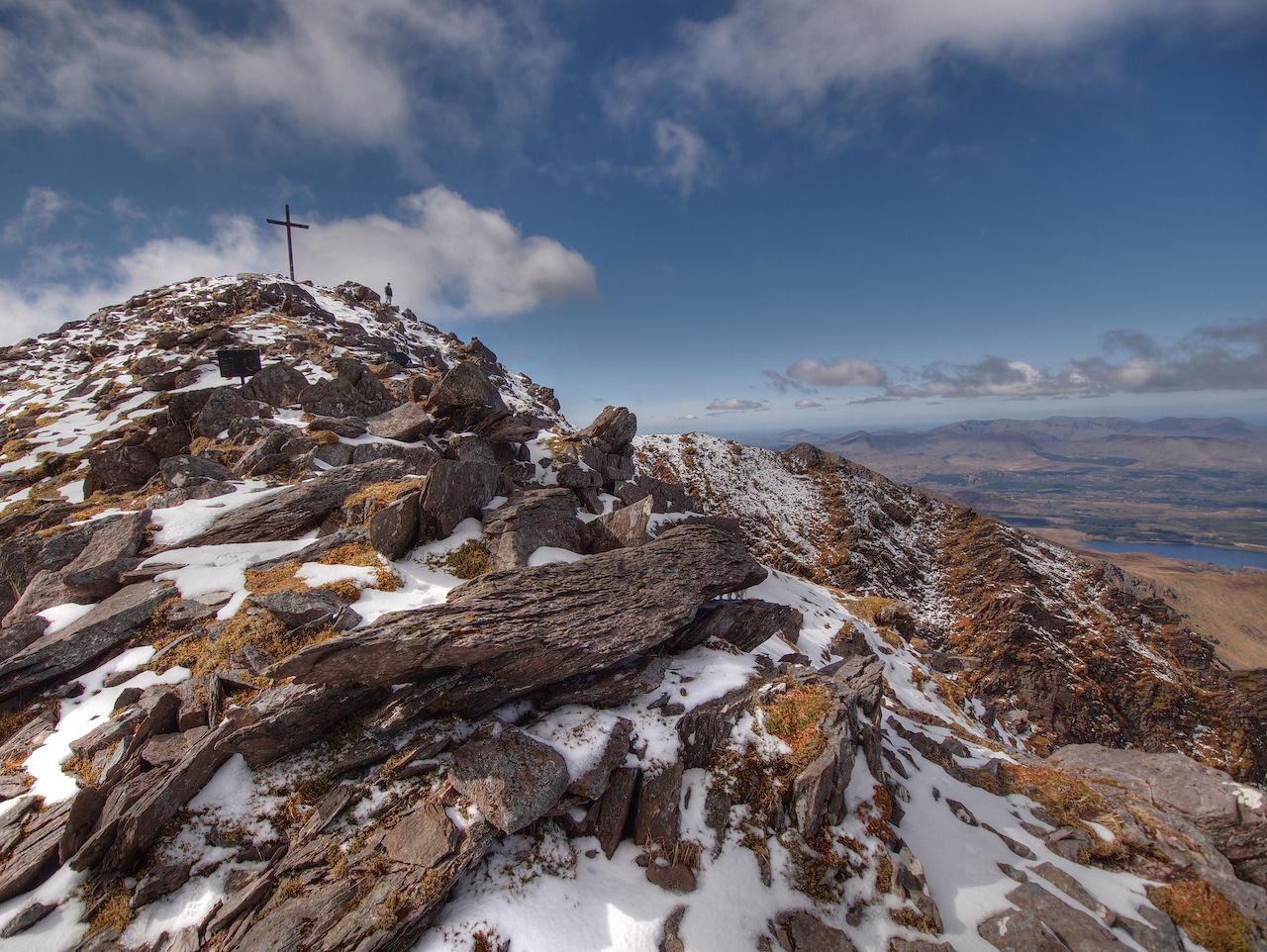 Views to look out for on the trails include:

At the summit, you’ll see the lush farmlands of County Kerry to the northeast. Dingle Bay will be to the northwest and Caher mountain to your west. To the east and south, you’ll have a vista of hills and lakes including Lough Gouragh, Lough Callee, and Curraghmore Lake.

Aside from the gorgeous landscapes in every direction, the other thing you’ll notice at the summit is a large steel cross. This is an upgraded version of a wooden cross first placed at the summit in the 1950s by the local community. Irish society has become much more secular since then, and as such, the steel cross was cut down in a protest against the Catholic Church in 2014. The steadfast locals quickly re-erected it within a week. 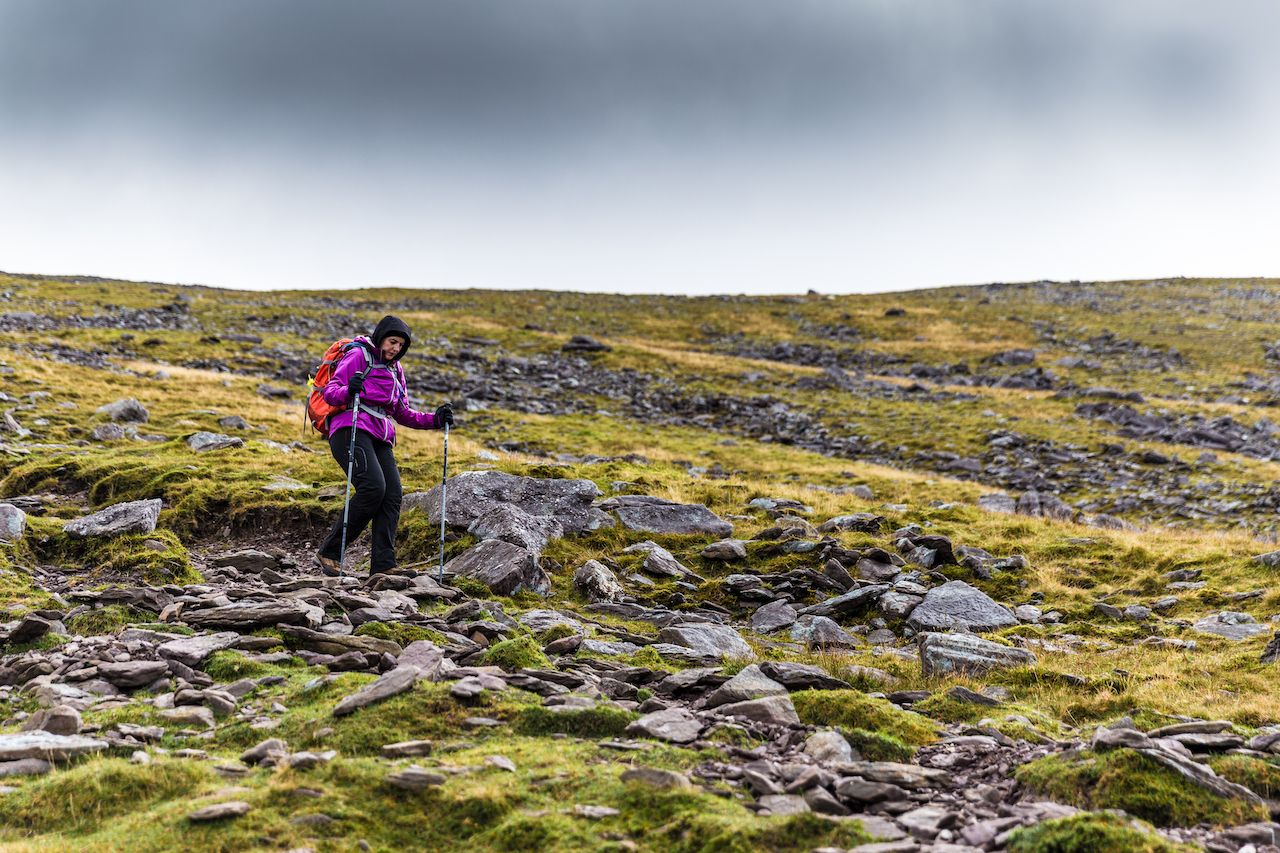 Climbing Carrauntoohil is not for the faint-hearted. Its location on a jagged peninsula by the Atlantic Ocean exposes it to all the elements. Weather conditions change rapidly, and visibility can go from perfect to nothing in a matter of minutes. Tragically, in May 2019, a climber died after falling several hundred feet from the Hag’s Tooth ridge. He was an experienced hiker who had climbed Carrauntoohil many times before, so safety really is paramount no matter what the conditions or your experience level.

Fill your backpack with waterproof outer layers (top and bottom), thermal clothing, a nutritious energy-filled lunch, and more rations and water than you think you’ll need. In a pinch, water from the lakes and rivers on Carrauntoohil should be fine to drink, but taking your own supply is always the safer option. Make sure you have a map and compass and that you know how to use them, and inform someone on the ground of your planned route. Whichever trail you choose, your toughest hiking boots will be needed.

Kerry Mountain Rescue advises climbers to exercise extreme caution on the descent. There are no safe descent routes anywhere to the north, northeast, east, or southeast of the summit. If in doubt, retrace your steps back along the route you came.

Once you’re back on level ground, don’t forget to rehydrate, rest, and let people know you made it back safe and sound. Back at Cronin’s Yard, the owners of the small cafe and camping ground on site will let you use their showers for a small fee. For a more substantial meal, the village of Beaufort is a 15-minute drive away and has restaurants, small grocery stores, and a couple of bars for a celebratory pint.