For a handful of years in early grade school, my family had a timeshare outside of Breckenridge, Colorado. Not a plush slopeside condo but, rather, an old wooden cabin that had been converted into a row of rustic townhouses built into a hillside east of town a few miles up Boreas Pass Road. Looking back, I’m surprised my dad was able to get my mother to go there not just once, but several times. While it was less than two hours by car from our home in suburban Denver, our annual pilgrimage up Interstate 70 to Breckenridge was the highlight of summer. This year, I rediscovered that feeling of youthful exuberance a few hours further west, on a mountain bike trip to Powderhorn Mountain Resort.

As a boy, I’d spend afternoons collecting pine cones in the woods behind the cabin. We’d embark on family hikes on the surrounding trails, typically lasting about 30 minutes before my sister or I would lose interest or suffer a minor mishap that needed attention. My dad would take us out in a pedal boat on Maggie Pond, which to me seemed a daring voyage worthy of a hardened sailor but, in reality, is a smooth jaunt across a man-made water feature in the ski resort’s base village.

Through the smiles and scowls of youthful exploring, I learned to miss this place when we weren’t there. To this day, the sharp, terpene-heavy smell of pine needles in the summer reminds me of that cabin. These summers instilled in me a love for the mountains, a growing obsession that would factor into every major decision I’d make as a teenager and young adult. 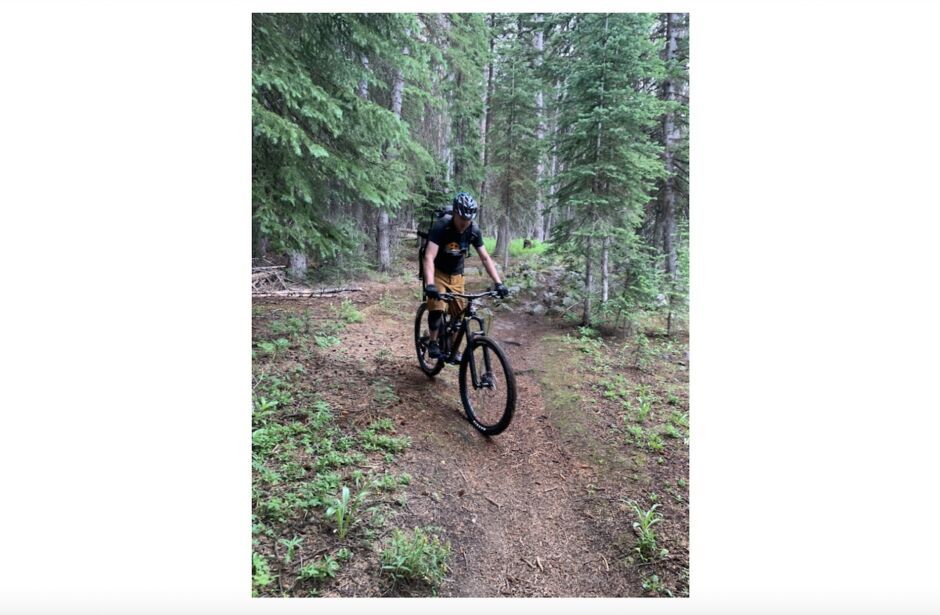 At age 37, I found Powderhorn to be the perfect place to reclaim this feeling. The resort is the sole ski area on Colorado’s Grand Mesa, the world’s largest flat-topped mountain. It’s just over 30 minutes from the western Colorado town of Palisade, where I now live, and under an hour from the bigger city of Grand Junction.

Powderhorn is a small resort, with three lifts and an old wooden day lodge surrounded by a small smattering of condos. Next to the lodge is a cluster of tiny homes that were installed last year to house skiers wanting a night of revelry rather than a drive back to town. Of the three restaurants, the newest option, the Umbrella Bar, is a glass-walled, yurt-topped contraption that offers 360-degree views from the alpine mesa down towards the sandstone walls of De Beque Canyon. It’s remote but great for families due to its lack of crowds and relative affordability compared to larger resorts. No Colorado ski area better represents the rugged spirit of skiing; and in the summer, I learned, there’s no better ode to the freedom of youthful mountain exploration.

I visited the resort to attempt the Plunge to Powderhorn, a newly-minted, 18-mile mountain bike ride that is an offshoot of the Palisade Plunge mega-trail that debuted this summer. The former takes off from the same Mesa Top Trailhead as the latter but bears right after five miles to head towards the resort. It traverses the Palisade Plunge trail through forests of pine and aspen trees, and around several of the small lakes fed annually by snowmelt that never quite finds its way off the mesa’s flat crown. It moves onto the Deep Creek, Rim View, and West Bench trails across open meadows of bright wildflowers. Finally, it descends a series of winding switchbacks to the top of the ski area’s main lift and concludes with a ride through the resort’s downhill bike park. 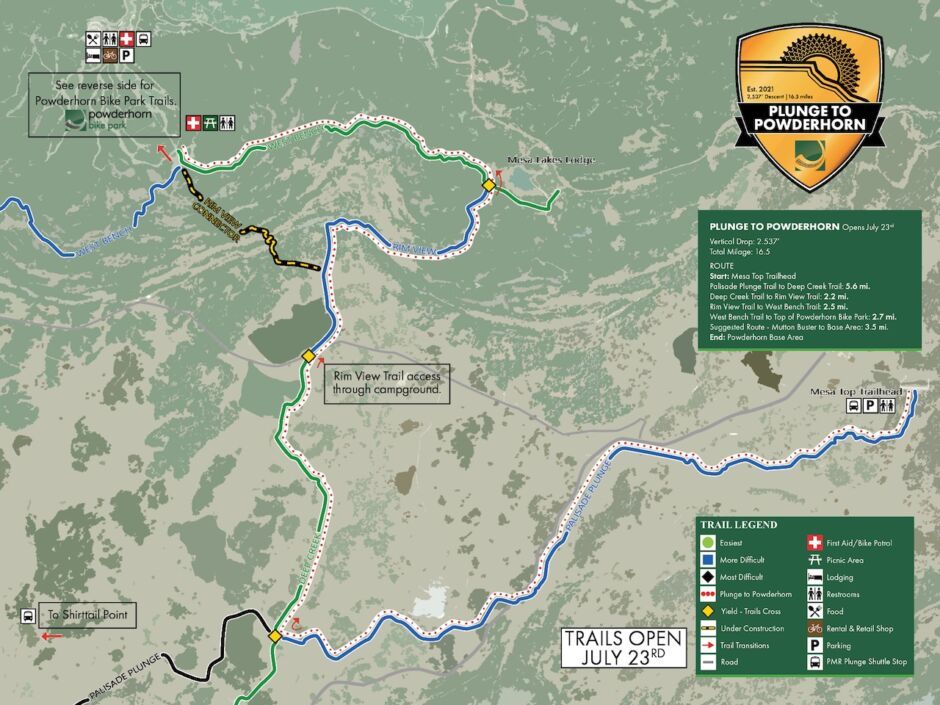 The Plunge to Powderhorn is a route of moderate difficulty. This makes it more approachable than the experts-only Palisade Plunge. It also makes it a better option for riders like me who, despite no shortage of time in the high country, overlooked the pleasure of off-road biking until about the time of their 30th birthday. I never developed the instincts and guts of those who grew up mountain biking. As a result, I’m much more timid on steep rocky slopes than many in the bike-crazy part of the state where I live. The Plunge to Powderhorn and the resort’s bike park cater to that by offering routes that don’t require barreling over ten-foot rock drops — though that option is there if you want it.

During the three-hour ride, our crew of three took several breaks to gaze out over the mesa’s edge or huddle in a cove of pine to recount a particularly fun stretch of trail. It was here that the terpenes got me again. I realized I was hooked on mountain biking not so much because of the actual riding, but because it takes me back to those summer days on Boreas Pass Road. The ride started out under a sunny sky before being overtaken by rain. Still, we arrived at the resort’s base in an ecstatic mood as the sun reclaimed its typical seat atop the mesa and the Grand Valley it overlooks. Collecting pine cones doesn’t do it for me anymore, but on the Plunge to Powderhorn I discovered that cruising a trail on two wheels sure does.

When I’m on the trail, it’s just me, my bike, and the mountain. Three compadres in a bumpy, descending dance with me as the unsure lead. I may not always look good, but damn it if I’m not having the time of my life.

For a few hours, I feel like a kid again.

CyclingAspen Snowmass Is Officially One of Best Mountain Bike Spots in the World
Tagged
Cycling Narrative Colorado, United States
What did you think of this story?
Meh
Good
Awesome