From the high alpine of Colorado’s Grand Mesa, a rocky dirt trail wraps, winds, and eventually descends 6,000 feet to the town of Palisade below. Years in the planning and construction, the Palisade Plunge will offer mountain bikers — and even hikers or horseback riders in some areas — access to lands and views that haven’t been available before. Before even opening, the trail is earning accolades.

Opening in spring 2021, the new mega-trail takes you from the Mesa Top Trailhead in the pine-forested alpine region, at 10,700 feet of elevation, 12 miles across the world’s largest flat-topped mountain. Less experienced riders can opt to hop off here at Shirttail Point. If you’re up for the challenge, however, you can follow the trail from there on its steep, winding descent along the side of the mesa, taking in expansive views of Palisade’s verdant wine country and Mt. Lincoln towering above downtown.

In total, the ride is 32 miles of epic, quad-busting terrain and is set to be the country’s next best mountain bike trail. Read on for the lowdown on the Palisade Plunge because this is one ride for which you don’t want to show up unprepared.

The story behind the Palisade Plunge 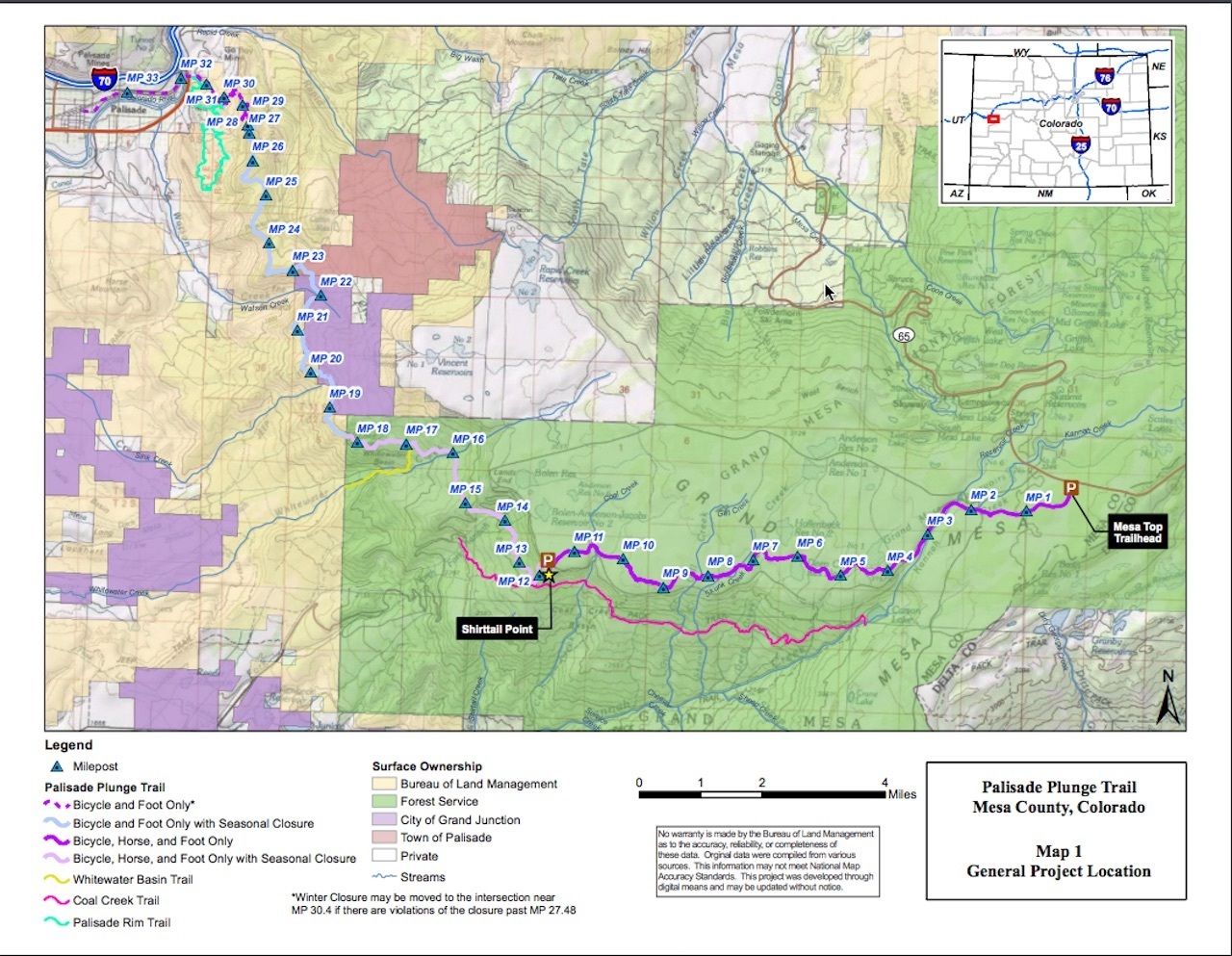 “The Palisade Plunge brings a unique, world-class mountain biking trail that connects the Grand Mesa to the valley floor below near the town of Palisade,” says Josh Springer, Project Manager with Mesa County Public Works, who has been part of the years-long effort to create the trail.

“The Plunge is one of a handful of similar singletrack trails worldwide. Portions of the trail traverse through areas not previously accessible to the public due to lack of trails and access restrictions. The trail travels through some amazing and diverse scenery, starting out in aspen and pine tree forests, and descending into desert canyons.”

Mountain bikers will be able to experience this behemoth of a mountain bike trail and catch the diverse western Colorado scenery as of the spring of 2021. Rondo Buecheler, co-owner of Rapid Creek Cycles and Palisade Plunge Cycles in downtown Palisade, has advocated for the trail since its inception and, along with many partners, has been a major proponent in bringing it to life. His shop will serve as a basecamp of sorts.

“[We] will offer Plunge Shuttles and bike rentals from the official ending of the trail in downtown Palisade,” he says. “We also service bikes and have last-minute stuff.” For around $30, riders can hop a ride in a shuttle van from the town of Palisade to the trailhead, about a 40-minute drive. From there, it’s on them to navigate the berms and bumps sure to challenge even veteran riders. 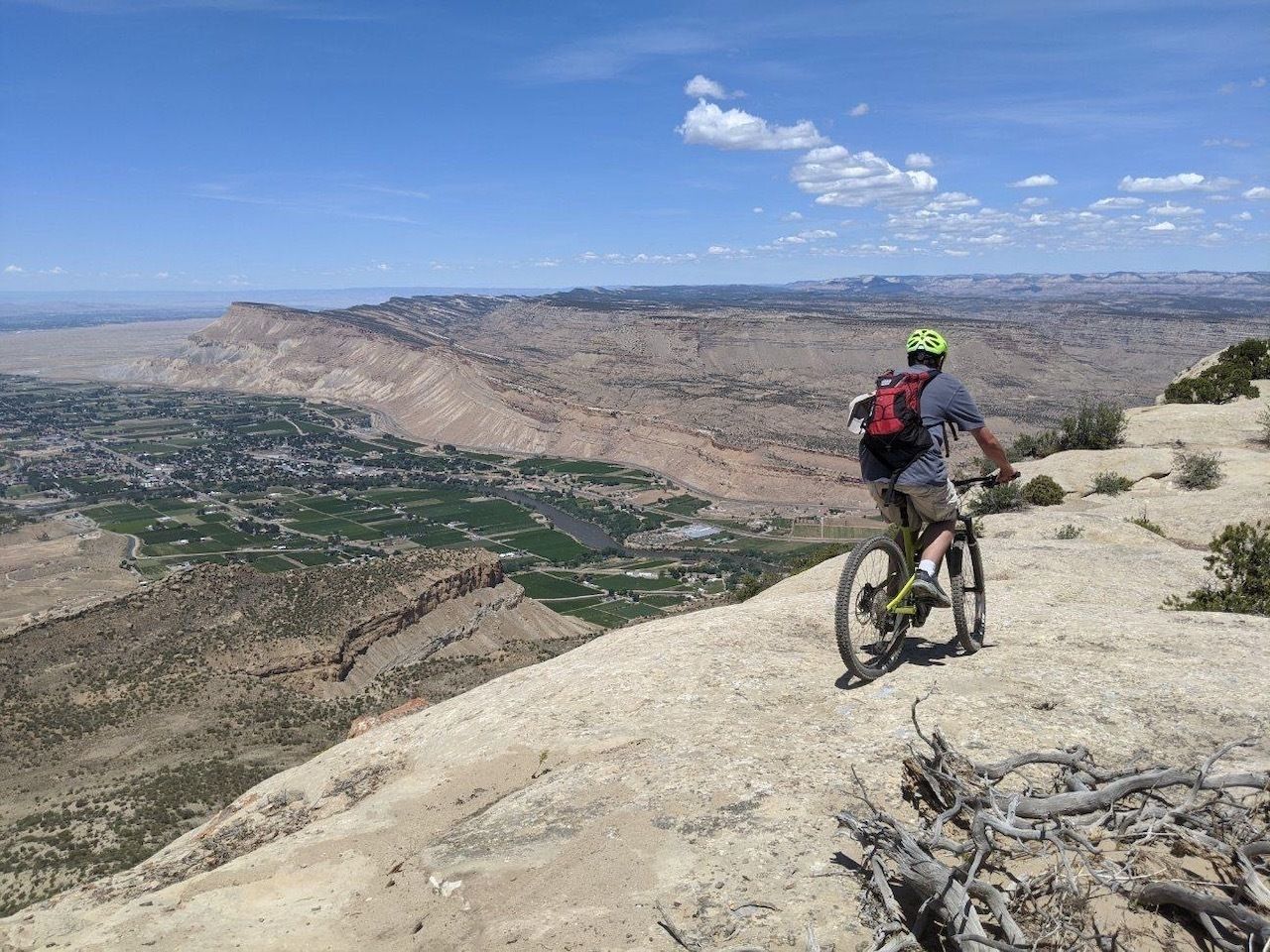 Construction of the Plunge over the past two years followed eight years of work between private landowners, local and federal government officials including the Bureau of Land Management, and the Colorado Plateau Mountain Bike Association (COPMOBA) to secure land easements and permitting. Once fully opened in Spring 2021, the trail will be accessible from May 1 into December, weather permitting. Shuttles will run from May to October.

COPMOBA estimates the total cost of the trail at nearly $3.5 million, with funding coming from grants and private donations from individuals and businesses. The trail is estimated to bring $5 million per year in revenue to the Grand Valley through spending on gear, lodging, food and drink, and other forms of recreation.

“Even though the trail was constructed for mountain biking, it is open to hikers as well, and is open to horseback riding through the portion on Forest Service lands,” Springer says.

What skill level and gear do you need to ride the Palisade Plunge? 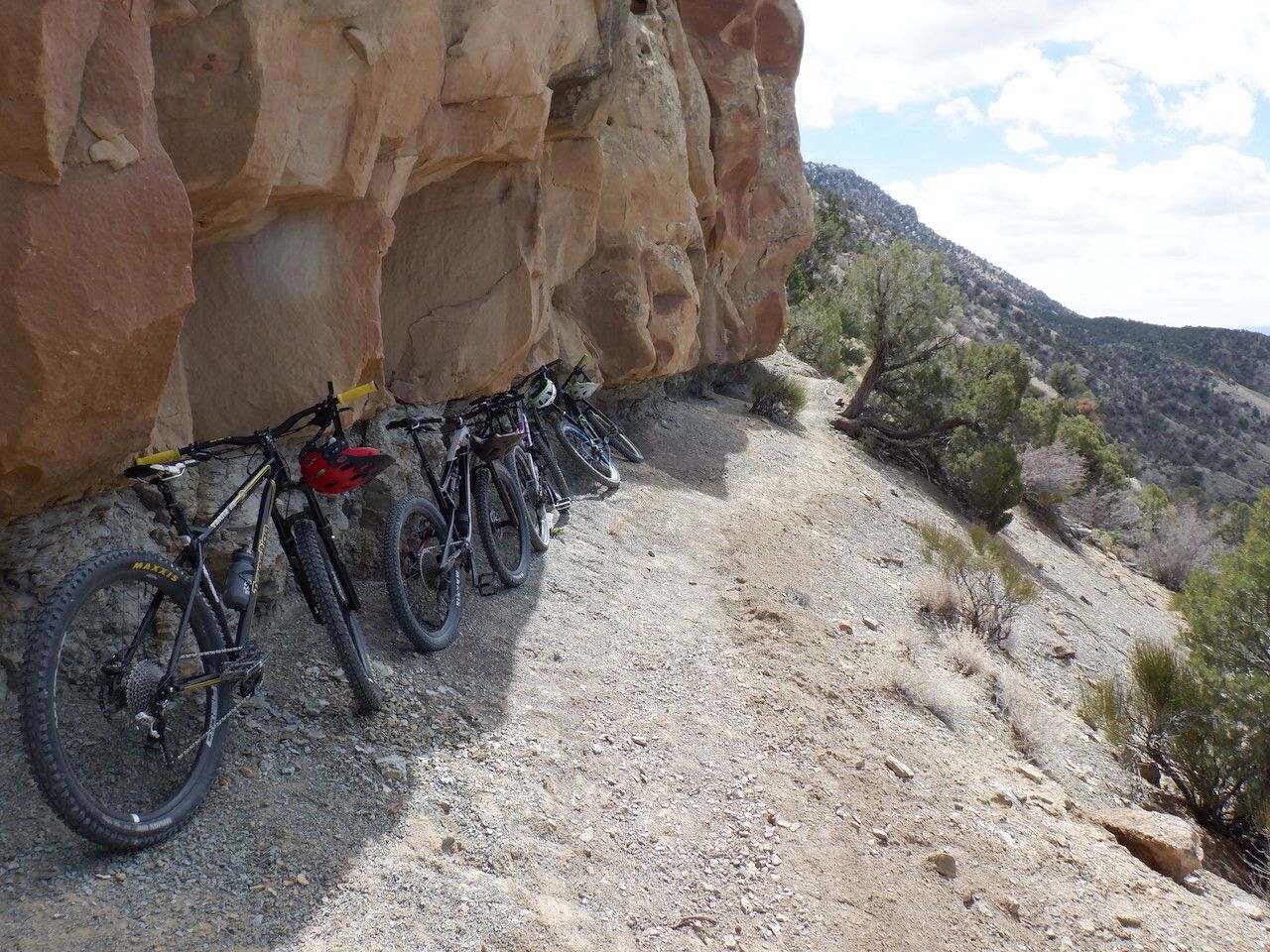 To ride the Palisade Plunge, one should be an “advanced rider who owns a bike,” Buecheler says, though his outfit will offer rentals. The first 20 or so miles are labeled as intermediate singletrack, with the final stretch intended for “upper advanced” level riders. Exposure to cliffs is unavoidable. You’ll need a helmet and protective gear, as well as plenty of water and calories to consume along the way. Layering is essential as well because when descending 6,000 feet, changing weather conditions are unavoidable.

The trail follows handbuilt singletrack across the top of Grand Mesa before dropping onto a steeper section along the Otto Wall, named for — and originally developed as a trail by — conservationist John Otto, who throughout a lifetime of outdoor work advocated most prominently for the designation of the nearby Colorado National Monument into the national parks system. The Plunge is taking home awards even before it opens. In October, the Palisade Plunge won a “Great Places” award from the Colorado chapter of the American Planning Association.

Expect a diverse ride. As Buecheler puts it, the trail consists of a “Flat first 1/3, then around 1,200 feet of ups and downs for 1/3 and mostly down for the last third.” A new parking lot was built at Shirttail Point on top of the Grand Mesa, but primary access is from the Mesa Top Trailhead. A connector trail will connect the Plunge to Powderhorn Mountain Resort, which offers lift-accessed downhill mountain biking in the summer. 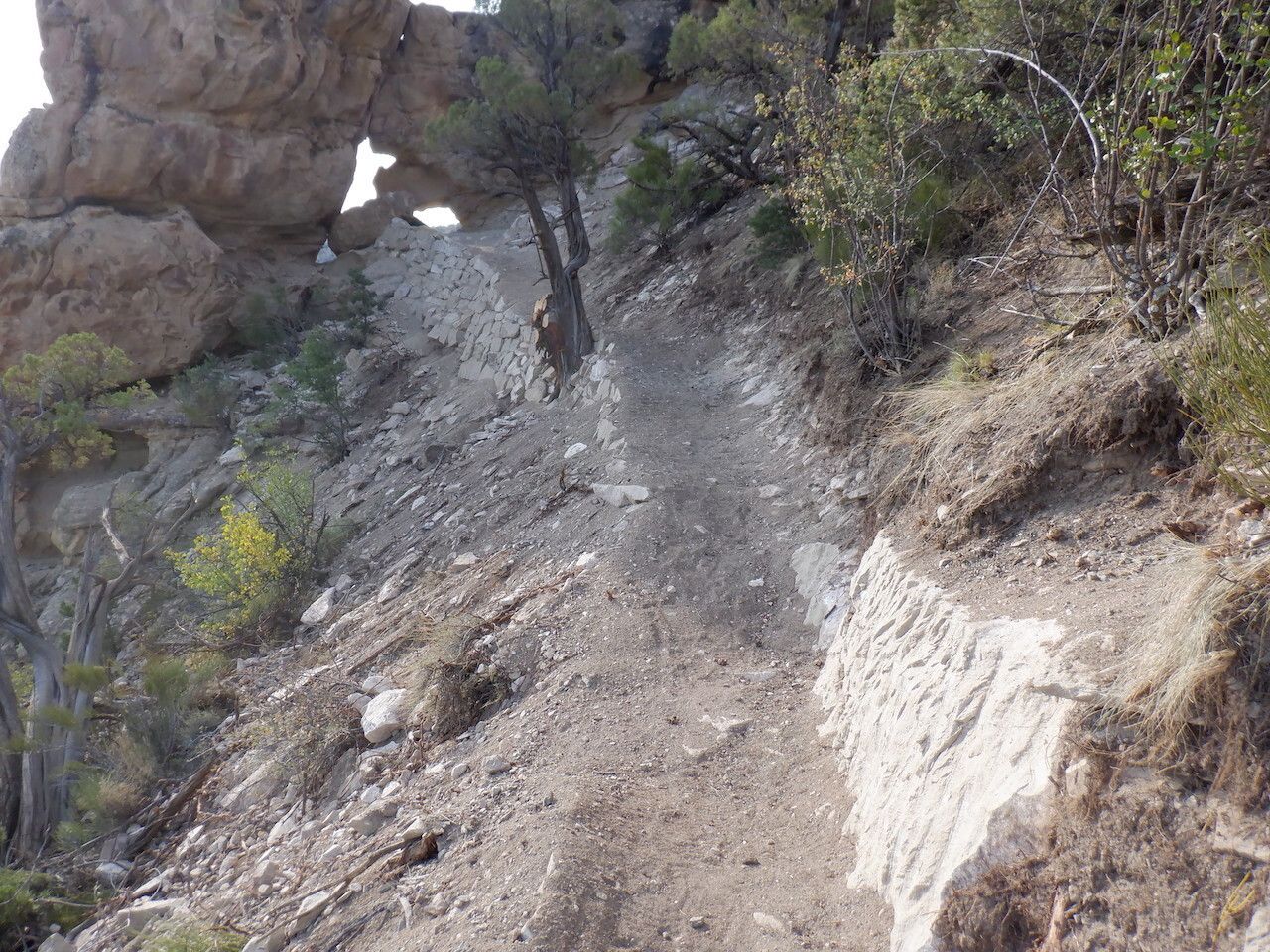 Designed to be a “destination trail” for mountain bikers, the Plunge is similar in length and difficulty to the Whole Enchilada trail near Moab and the Monarch Crest trail in Colorado. With sections of smooth dirt, others rocky and bumpy, and the final third a steep descent to the end of the trail, the Plunge will take even seasoned riders at least four hours to complete. Several overlooks present themselves along the way as rest points, though the trail is not suitable for beginners or those looking for a casual afternoon cruise.

Buecheler notes that the trail is most similar to the Whole Enchilada, though there is “not the climbing you have to do from Burrito Pass on the Enchilada,” he says, referring to a grueling uphill stretch of the ride that many bikers prefer to walk.

More than anything, the Palisade Plunge is a “by the riders, for the riders” trail built as a testament to the Grand Valley’s mountain biking community. Along with COPMOBA, local officials, and volunteers, Buecheler says, “Scott [Winans, his business partner and President of COPMOBA] and myself have worked hard to make this trail happen for all our friends.”

Where to stay and what else to do in Palisade 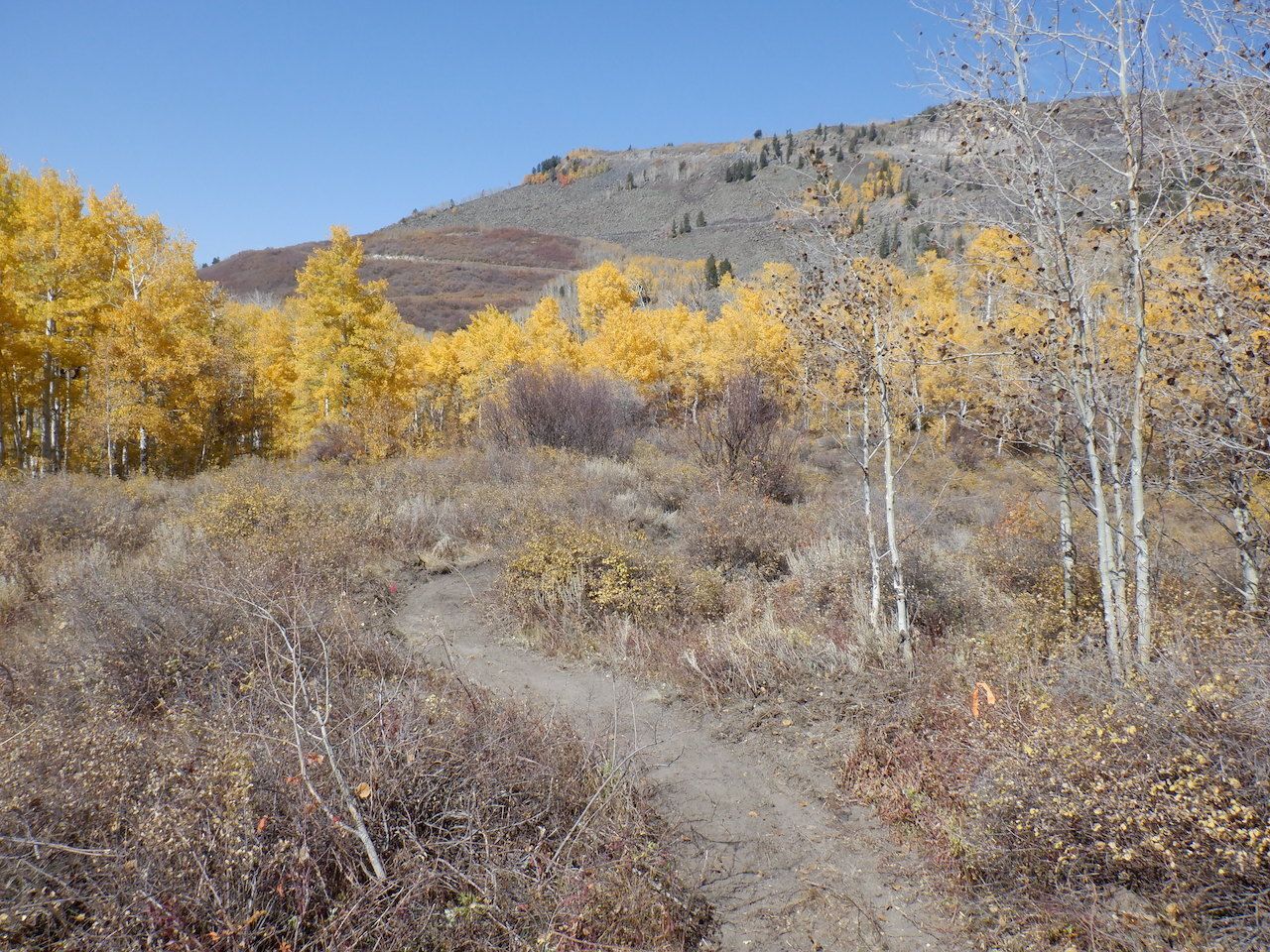 Downtown Palisade is a five-minute drive (or a 15-minute pedal) from the bottom trailhead.

Palisade Brewing Company and Peach Street Distillers serve drinks and food daily. Spoke and Vine Motel opened in 2019 as a hub for outdoor recreationists visiting Palisade. The motel often hosts food trucks and lawn gatherings on busy nights and is the starting point for a weekly group bike ride that pedals from its parking lot at 6:00 PM on Mondays and traverses the town in parade fashion.

“We have paired with Palisade Pedicab to promote a community ride,” says Jody Snook, who co-owns the Spoke and Vine Motel with her husband Jeff. “We meet at the motel at 6:00 PM and take a 2-3 mile casual cruiser ride around town. We finish with beers at the motel. It’s been a great way to meet those in our community. We have cruiser bikes for people to use if they don’t have one of their own.”

Other options include the Wine Country Inn, with an onsite restaurant and walkable access to wine tastings at Grande River Vineyards and St. Kathryn Cellars. Palisade Basecamp offers RV parking and camping less than a mile from the bottom of the Plunge trail. The town itself is best known for its 25 wineries and numerous orchards, nearly all of which are reachable by bicycle.

CyclingBikepacking Is the Coolest New Way To Get Outdoors
Tagged
Cycling National Parks Colorado, United States
What did you think of this story?
Meh
Good
Awesome