Thousands of protesters fighting for LGBTQ equality took to Poland’s crowded city streets in Warsaw, Krakow, Lublin, and Wroclaw last weekend, chanting, “You will not lock all of us up!”

The demonstrations erupted one day after police arrested non-binary activist Margot Szutowicz in Warsaw for acts of civil disobedience. Her supposed crimes include hanging rainbow flags from prominent city statues and slashing the tires of a van responsible for spreading anti-LGBTQ rhetoric like “homosexuals are preparing society to accept pedophilia.” At least 48 other people were arrested, and officers reportedly used violent tactics — like holding people down with their boots – to quell the peaceful protests. Police gave many detainees no reason for their arrest.

Advocacy groups quickly dubbed the demonstrations “Polish Stonewall,” drawing parallels to the fight against police brutality led by NYC’s queer community 51 years ago. The events of June 28, 1969, changed the course of history. Here’s hoping the events of August 8, 2020, have the same power.

Poland, a predominantly Roman Catholic country led by the populist Law and Justice Party, is notoriously anti-LGBTQ. According to Rainbow Europe, which tracks LGBTQ equality laws and policies in European countries, Poland ranks last when it comes to quality of life for queer citizens in the EU. Participants at a 2019 Pride march in the city of Białystok were attacked with stones and bottles. On the eve of last year’s Pride parade in Warsaw, far-right journalist and television personality Rafal Ziemkiewicz posted to Twitter, “One must shoot at LGBT people.” He then added, “not in the literal sense of course — but these are not people of good will or defenders of anybody’s rights, [the movement is] a new mutation of Bolsheviks and Nazis.” Within the past year, nearly one-third of the country declared itself an “LGBT-free zone.”

President Andrzej Duda, who narrowly won re-election on July 21st, uses equally vicious epithets targeting the LGBTQ community. He stated that “LGBT are not people; they are an ideology” and calls queer rights “destructive to man.” A 2017 report by the Centre for Research on Prejudice of the University of Warsaw found that Poland’s exposure to hate speech in popular media increased 25 percent since Duda took office in 2015.

In response to the resulting violence faced by LGBTQ individuals, queer people are fleeing the country for places like the UK, Germany, and Spain. Others continue to fight for rights in their homeland despite the devastating consequences.

According to Balkan Insight, Margot is currently in pre-trial detention for two months. If convicted, she may face a maximum sentence of five years in prison. Other protesters arrested this past weekend may face up to three years.

On Saturday, Dunja Mijatovic, the human rights commissioner for the Council of Europe, denounced the actions taken against Margot, tweeting, “Order to detain her for 2 months sends very chilling signal for freedom of speech & LGBT rights in Poland.”

How to support Poland’s LGBTQ community 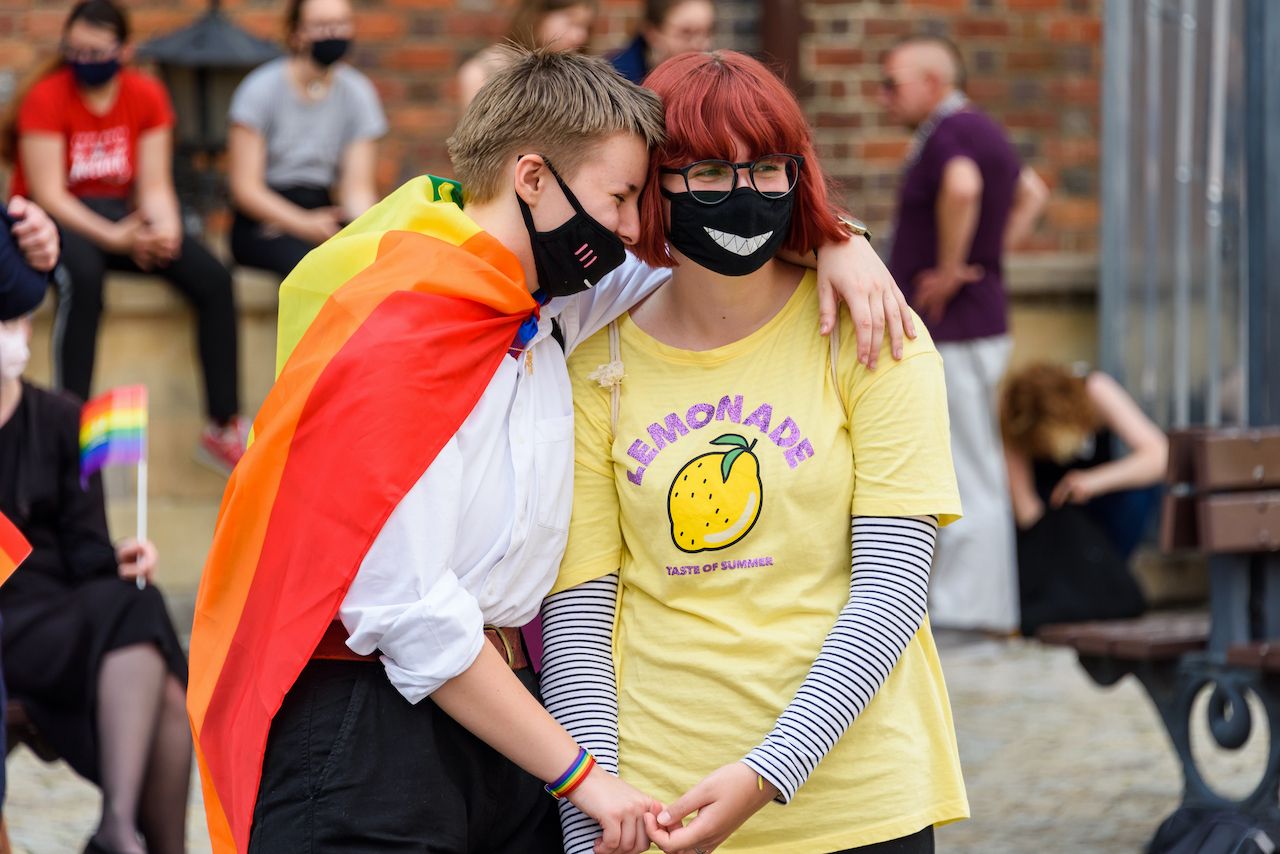 Although Stonewall was pivotal in the fight for LGBTQ rights, it wasn’t a panacea for inequality. The United States didn’t federally legalize same-sex marriage until 2015. It took until this past June for the government to protect LGBTQ Americans under the 1964 Civil Rights Act. Poland’s protests are also only a small step forward on what will be an arduous journey toward acceptance, and in order to gain forward momentum, the country’s queer community desperately needs outside support.

That’s where you come in.

The Campaign Against Homophobia (KPH), which is currently busy recruiting pro-bono legal help for Margot and the 48 other protesters arrested last weekend, offers opportunities for people to become virtual activists. Visit the website and add your email under “Get Involved Virtual” to receive updates with petitions and other ways to be of assistance.

Stop Bzdurom (Stop Bullshit), the queer collective to which Margot belongs, is raising funds to cover a variety of expenses, including Margot’s lawyers. You can donate to the group or share their website through Facebook, Twitter, or email by following the links on their homepage.

Political leaders from other countries must rally together and condemn the actions of Duda, and the European Commission must denounce police brutality just as it called out federally sanctioned violence in Belarus following the country’s tumultuous election on August 9.

For international activists without political power, contributing to such lofty goals may seem futile. Luckily, the best way to be an ally is both cheaper and easier than you think: share their story.

Although “Silence = Death” was a political campaign used to create awareness around the AIDS epidemic in the 1980s and 1990s, it continues to provide valuable lessons for modern times. If we do not amplify the voices of marginalized communities overpowered by political machines, we cannot save them. Social media is a powerful tool for creating visibility. Posting stories that call out human rights violations and condemn injustices can be instrumental in enacting change. The best part? You don’t have to leave home to join the fight. All you have to do is click a button. For the sacrifices made by heroes like Margot Szutowicz, it’s the least we can do.

LGBTQ TravelOne of NYC’s Most Historic Gay Bars Needs Your Support
Tagged
LGBTQ Travel Poland
What did you think of this story?
Meh
Good
Awesome