I’ve long been someone who views hotels primarily as a place to lay down my head. Hotels all too often feel like a place set a world away from its location, and you can’t really explore what makes a city special if you surround yourself only with other hotel goers. But there are always exceptions, as I found at The Dean in Providence, Rhode Island.

The Dean is a pet-friendly, 52-room hotel in historic downtown Providence. As with many hotels in the area, the name is a nod to the nearby Brown University and Rhode Island School of Design (RISD). The early 19th century building gets a modern feel from neon signs throughout the lobby and hallways, though there are still touches of what the location used to look like, including the original brick facade and mosaic tile flooring. Other original parts of the building are charming but impractical depending on your group’s size and the amount of luggage you have. Case in point: the elevator with a sliding metal door, which looks like a mid-century lift that needs a bellhop (though it would be a tight squeeze, to say the least, if there was a bellhop).

The old-school lift, of course, isn’t why you come to The Dean. I was in Providence for a wedding, and during the rehearsal dinner, a group of us were chatting with the photographer from the area to gather some bar recommendations. First and foremost she mentioned The Boombox. Then, a couple moments later, she name dropped The Dean Bar. Both are on site at The Dean hotel; this was the first time I encountered someone who lives in a city I was visiting who recommended not one, but two hotel bars.

The Boombox holds the special place as Providence’s first and only karaoke lounge. There’s a main room where you can sing in front of friends and strangers alike if you’ve got the voice for it (or even if you don’t but the sake has you ready to jump on a public stage). For a more private singing affair, there are five rooms you can rent by the hour for as many as 20 people. The Dean Bar is a cozy cocktail lounge serving elevated classics and originals (currently due to COVID restrictions the drinks and cocktail kits are to-go only through The Dean’s partner restaurant, north). 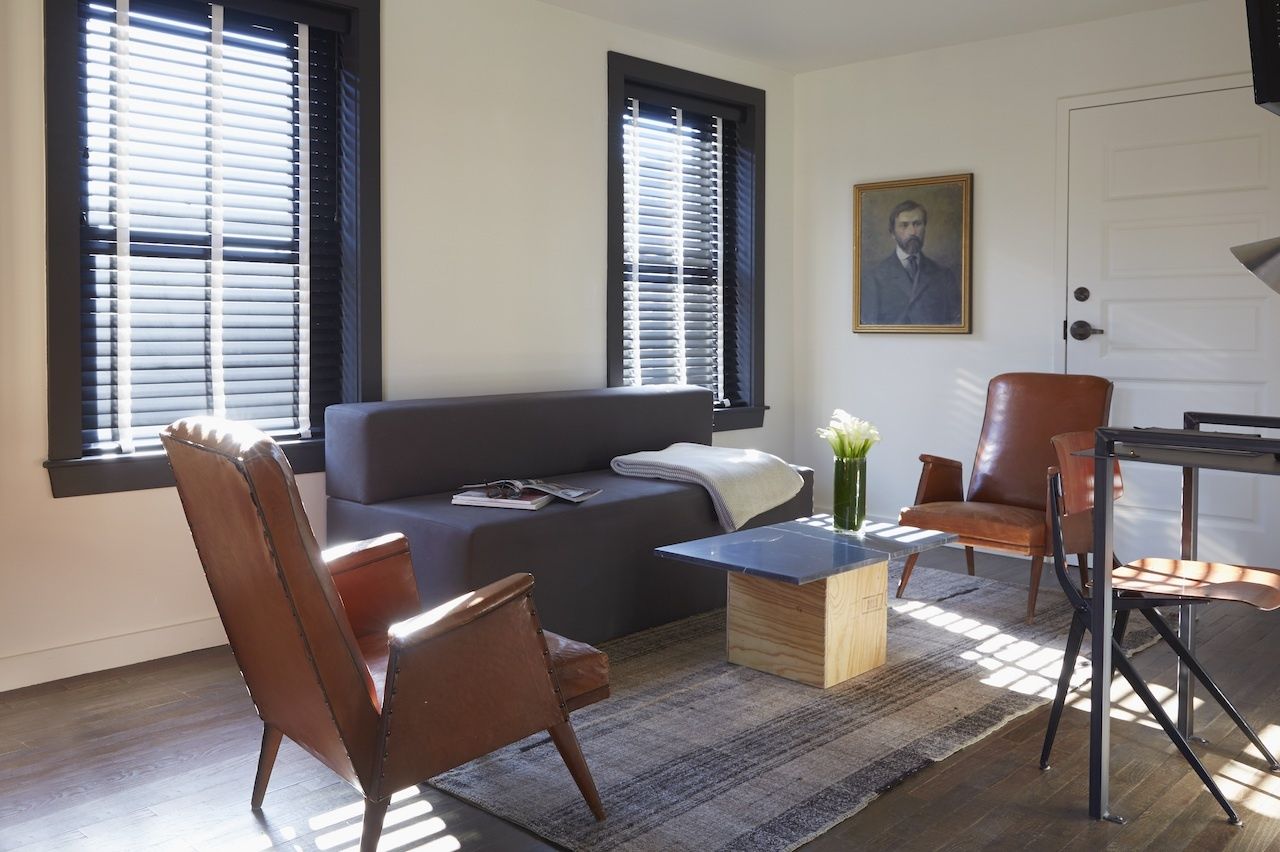 It’s the rare hotel bar (or in this case, bars) that make it onto a local’s top spots list. Of course, you don’t have to stay at The Dean to visit any of the above. It certainly is easier to waddle back up to your room than it is to find your way back to another hotel, though. And there’s a good chance that other hotels won’t have the same design-forward thinking as The Dean.

The rooms are furnished with European and American antiques from global dealers, as well as pieces from local artists. The elephant-carved nightstands, for example, were made by artist and RISD professor Will Reeves. The artful interior design helps the space feel lived in.

There are eight room sizes and styles to choose from, all of which have signature black bathrooms, actually good snacks, rain showers, original artwork, a TV, and exclusive toiletries. The smallest room is The Kin, which is designed for two and has a bunk bed, while The Classmates is made for four with two bunk beds. The Patron and The Mates are for two with a single queen bed, and some of the latter have what The Dean describes as “a revealing shower ideal for voyeurs and exhibitionists.” The Gang and The King fit four, while the Guardian Suite can fit up to six. Lastly, there’s The Heights, which is a suite with four interconnected guest rooms on the private top floor that sleeps 10.

For longer stays, The Dean is conveniently surrounded by other notable destinations that are easy to walk to or travel to on one of the bikes The Dean offers for rent through Dash Bicycle. For groups of beer lovers, there’s The Malted Barley, Congress Tavern, and Providence GPub (which also has a rooftop). Cocktail fans won’t be disappointed with the drinks at The Eddy.

At the end of your time in Providence, though, you might just find yourself returning for a final round of karaoke.

Food + DrinkRhode Island Is Home To the Best Calamari in America. Here’s Where To Try It.
Tagged
Restaurants + Bars Epic Stays
What did you think of this story?
Meh
Good
Awesome