It’s that time of year again. Pumpkin is back in season and dominating menus across the US, inspiring everything from our beers to our favorite holiday treats. But the quintessential winter squash is good for way more than just Thanksgiving pies and jack-o-lanterns. It’s a staple ingredient all over the world, celebrated in traditional recipes that are equal parts sweet and savory, hearty and delicious. When you make your trip to the pumpkin patch this year, don’t carve into your harvest too quickly; instead, keep these game-changing global dishes in mind to make the most of everyone’s favorite cold-weather gourd. 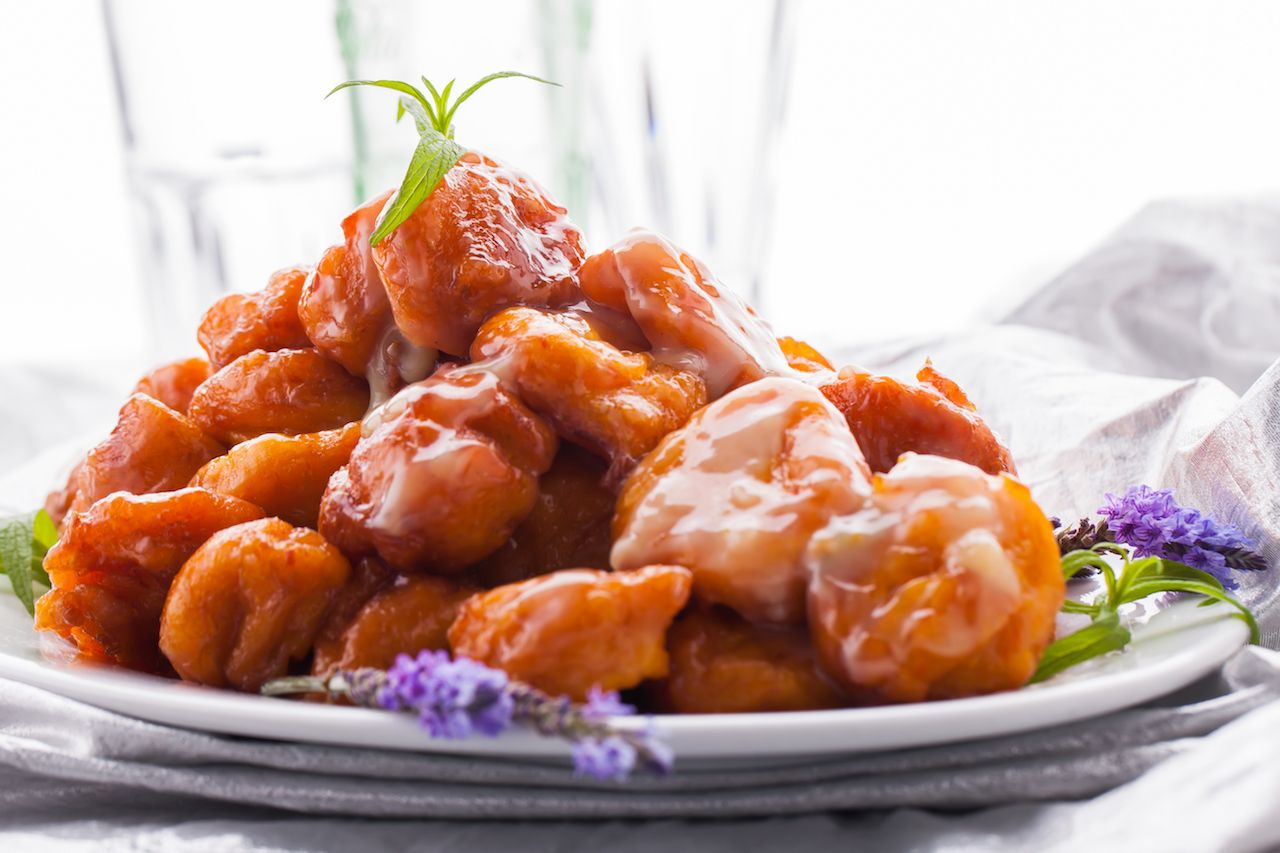 America may seem to have a monopoly on deep-fried everything — we’re looking at you fried butter — but these pumpkin fritters from South Africa are some of the tastiest treats you’ll ever eat. Light as a cloud, the traditional dessert melts in your mouth and is often enjoyed drenched in caramel sauce, which brings out the sweetness of the main ingredient. And the best part is that they’re incredibly easy to make. Combine pumpkin purée, flour, baking powder, sugar, milk, egg, and spices — cinnamon, nutmeg, and allspice — then mix until well combined. Divide the batter into bite-sized balls and fry them up in oil with a high smoke point, such as canola or vegetable oil. Take our word for it and try these at home — your sweet tooth will thank us. 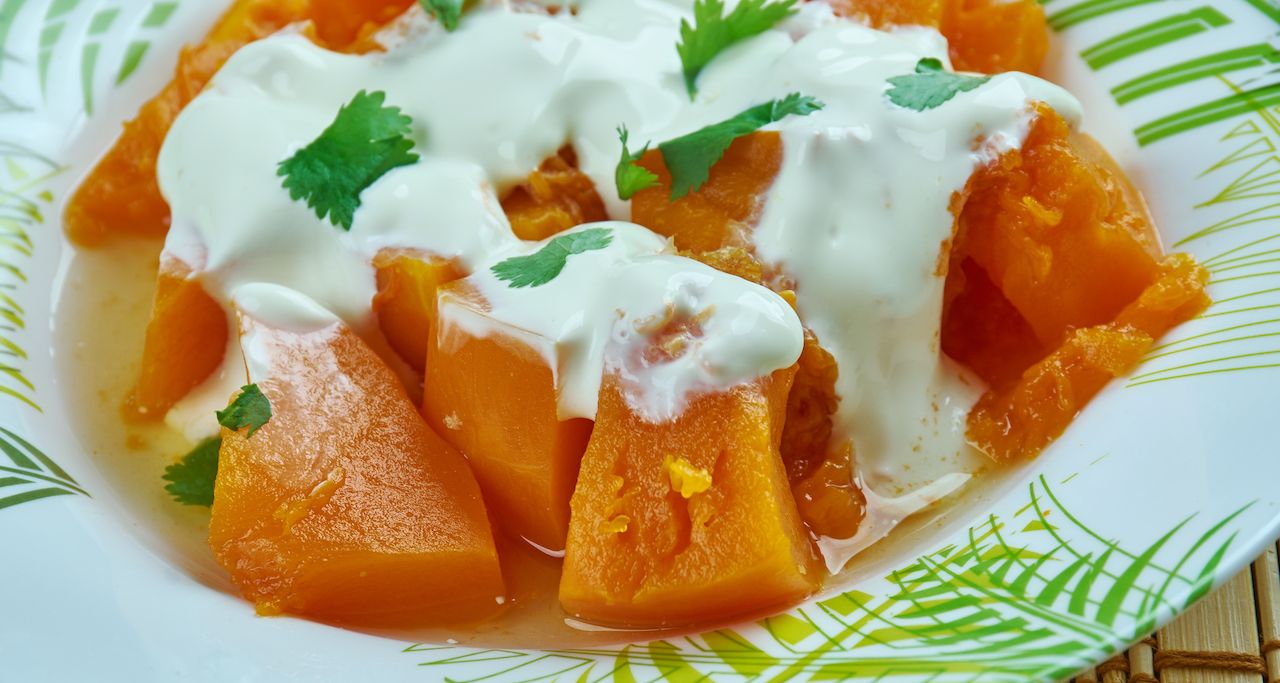 Roasted, broiled, stewed, pureed — there are countless ways to prepare pumpkin. This particular recipe calls for pumpkin to be lightly fried then simmered in a liquid mixture made with onion, garlic, ginger, turmeric, coriander, chilli powder, tomato paste or sauce, and water. Lamb or beef are popular additions, which can be ground and heated with the spices and aromatics before being combined with the pumpkin and simmering liquid. Serve challaw kadu with rice and top with yogurt sauce for a bit of freshness and tang. Garnish with fresh mint, and you’ll have a dish that will leave you wanting seconds.

Forget everything you thought you know about pumpkin pie. This mouthwatering Egyptian rendition ditches a flaky crust in favor of spreading pumpkin filling — flavored with cardamom, cinnamon, orange blossom water, and honey — to the very edges of a greased baking dish. Raisins, nuts, and grated coconut are layered in for texture and extra sweetness, then the whole thing is topped with a creamy vanilla sauce. If you want to test your fate with cavities, you can also add an extra splash of honey or maple syrup to the finished product, which is best enjoyed fresh out of the oven.

What makes this Vietnamese dish so good is the marriage between hearty chunks of pumpkin, a protein like minced pork belly, and a delicate, savory broth. Pork stock is preferred for the broth base, which gets its depth from any number of add-ins, ranging from mushrooms and fish sauce to green onions and cloves. Salt, pepper, and sugar are also crucial as the base seasonings. Perfect for cold weather, canh bi do thit is as effortless to prepare as it is enjoyable to slurp down, assuming you’re not making your stock from scratch. 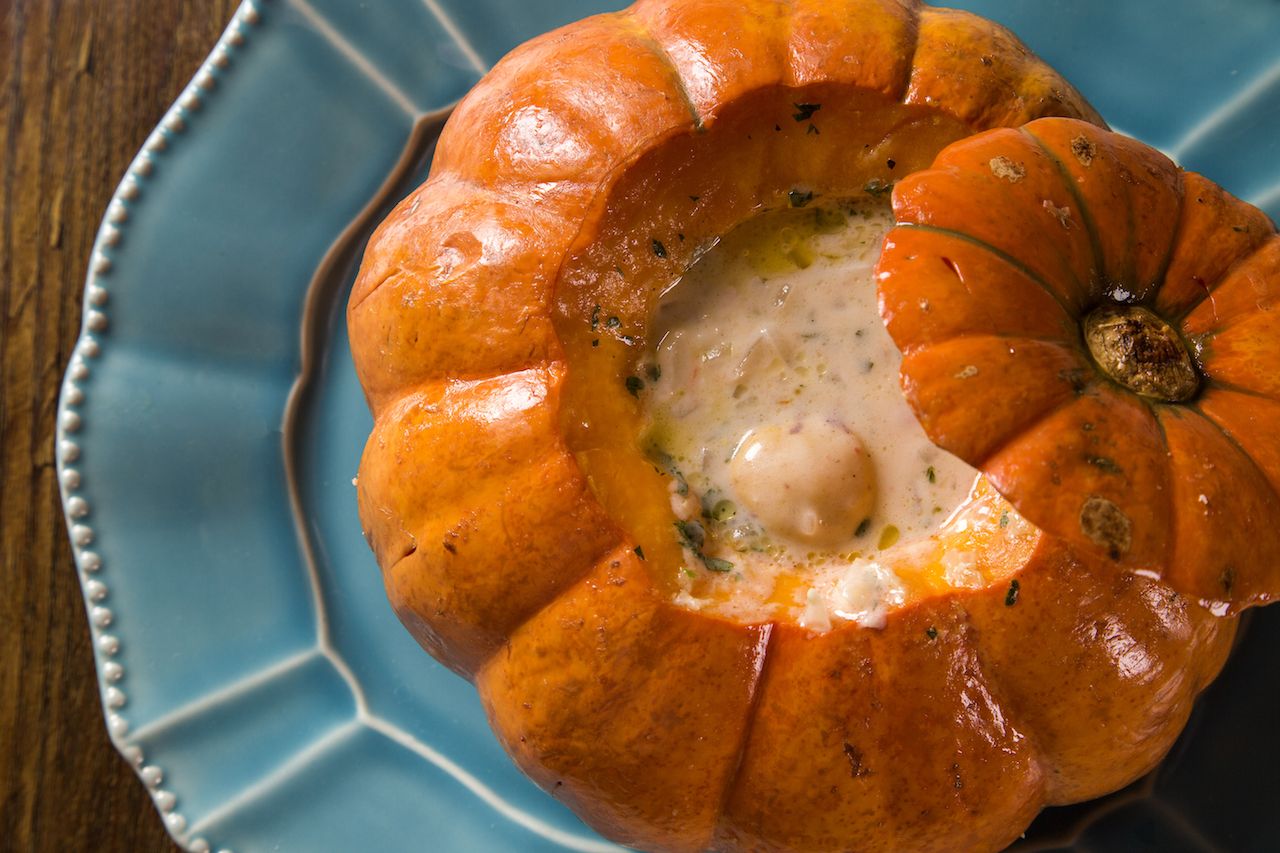 There are two stars of this classic Brazilian dish, which is so popular back home there’s a festival dedicated to it in São Paulo every year. Pumpkin (moranga) and shrimp (camarão) come together to make a meal that is as pleasing to the eye as it is the palate. First, an opening is cut into the top of a pumpkin, which is then deseeded, wrapped in tinfoil, and baked on medium-high heat for 45 minutes to an hour. Shrimp is then sauteed with garlic and onion, followed by seedless tomatoes and spices like black and red pepper. Once fragrant, the mixture is removed from the heat and combined with cream and cream curd (cream cheese or cottage cheese can be used as a substitute). The filling is then scooped directly into the tender pumpkin and filled to the brim. Garnish with cilantro, pair with white rice, and dig in. 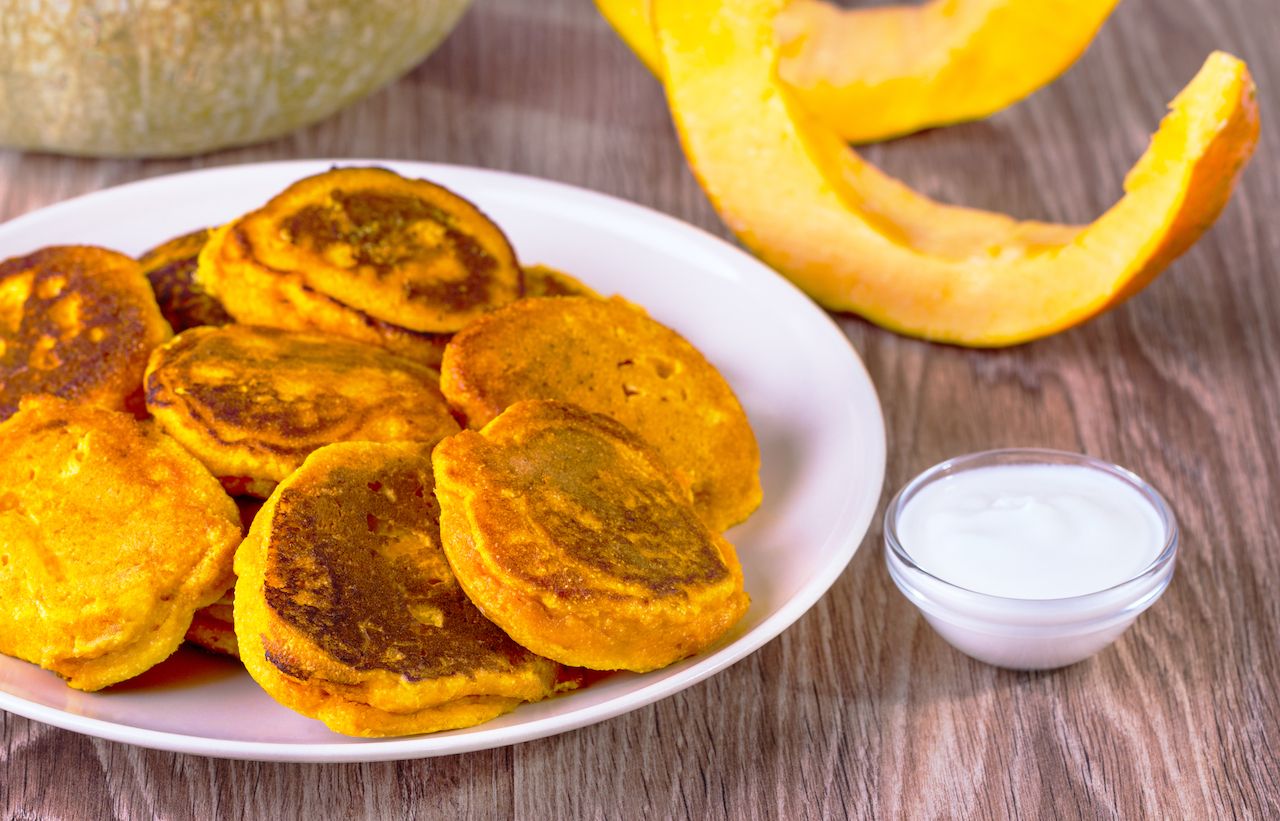 If you’re craving pancakes this fall, we suggest that you back away from those blueberries and ditch those chocolate chips. Instead, take a page out of a Russian cookbook and let pumpkin bring the sweetness. Olad’i iz tykvy uses all the ingredients you’d expect of a batch of buttermilk pancakes plus pumpkin purée, which not only adds flavor but also a silky texture. The end result will be moist and fluffy but still thin — perfect to be enjoyed in a tall stack drizzled with honey, a dollop of jam, or sour cream. Pancakes are a traditional breakfast in Russia, and with recipes like this one, we can understand why. 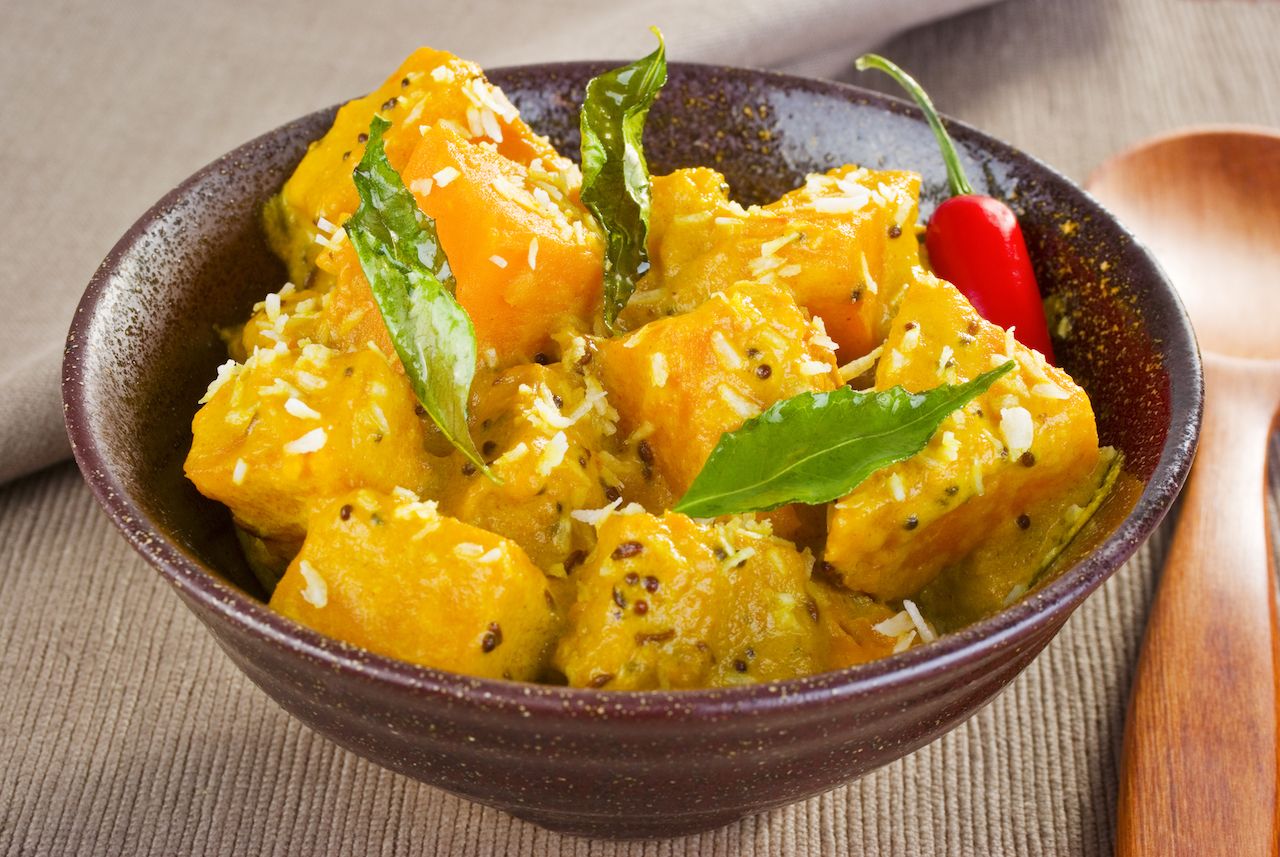 Pumpkin curry is one of Myanmar’s defining dishes. Popular recipes pair pumpkin with tamarind and sometimes peanuts or proteins like chicken to create a rich curry that hits all five basic tastes: sweet, sour, salty, bitter, and savory. To make it yourself, steep tamarind in boiling water, pass it through a sieve, and reserve the resulting liquid. After, fry up onion, garlic, turmeric, ginger, chilis, and dried shrimp powder, then add your peeled and chopped pumpkin cubes. Pour the reserved tamarind juice over the pumpkin once it’s lightly browned, using extra water if necessary to ensure that the cubes are just covered. Simmer until tender but not mushy. If you opt to add peanuts, toast them for a few minutes and sprinkle on top. Serve with rice. 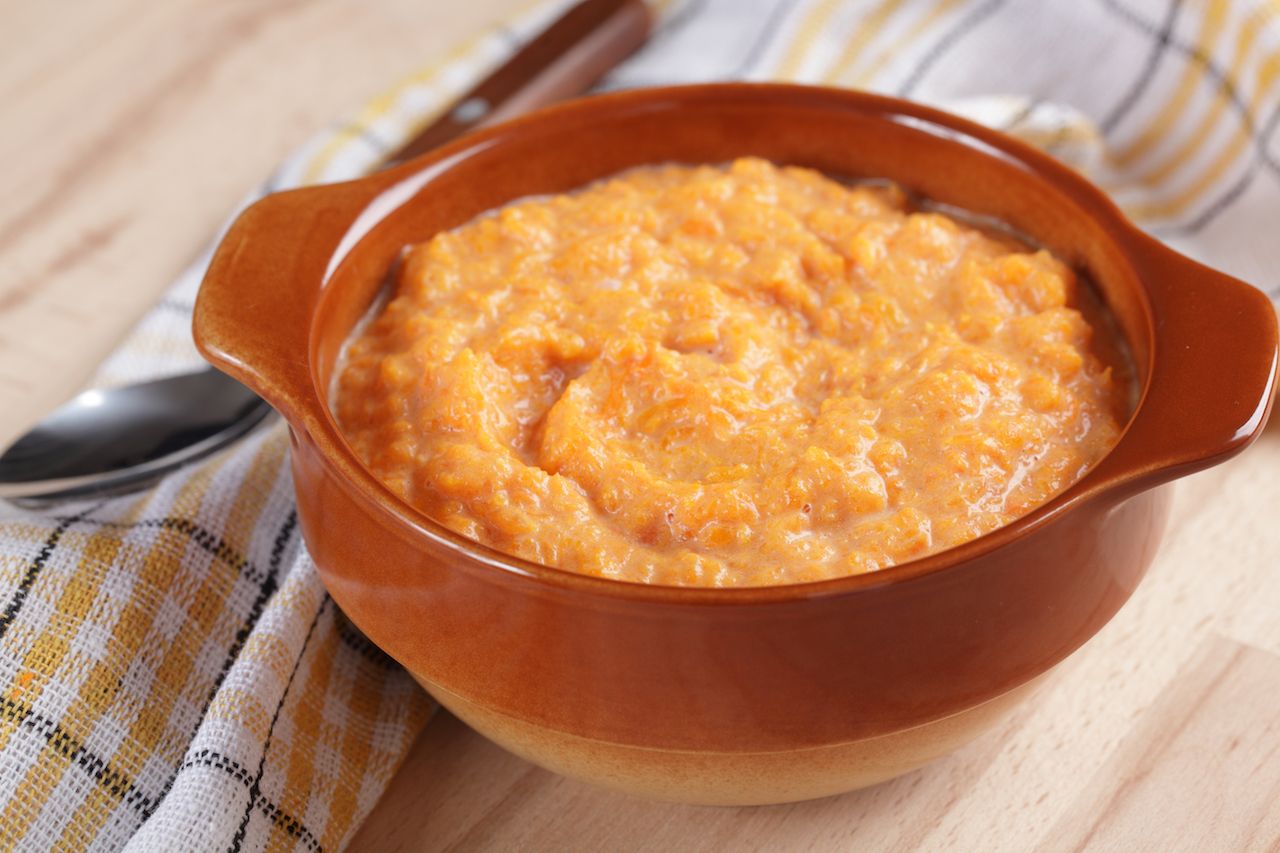 Nhopi is a type of porridge made with a simple list of ingredients that strikes the perfect balance between sweet and savory, including pumpkin, peanut butter, and cornmeal. Once the pumpkin has been cleaned, diced, and left to simmer in water until tender, it’s removed and mashed. Cornmeal is then added to the water until it forms a paste. After, the two ingredients are combined, and peanut butter is melted in. Whatever spices are incorporated next is up to the individual chef. The most popular additions are cinnamon and ginger — as well as salt, sugar, or both, depending on your preference — but add-ins like nutmeg or allspice also go quite well. This traditional, filling dish makes a nice alternative to oatmeal for a morning meal and can also be eaten as a dessert if you play up the sweet notes.

Kaddu ka halwa is to Indian kids what apple pie is to American kids: a sweet treat best prepared by grandma, or naniji in Hindi. It’s commonly sold during street festivals and at market stalls during the rainy season in India, when pumpkins are ripe for the picking. It’s a simple recipe made from grated pumpkin, which is traditionally cooked in ghee along with nuts like pistachios or cashews, milk, cardamom, and sugar. The resulting mixture will be thick like pudding but more fibrous. For a bit of flair and a nice crunch, garnish with extra nuts before serving. 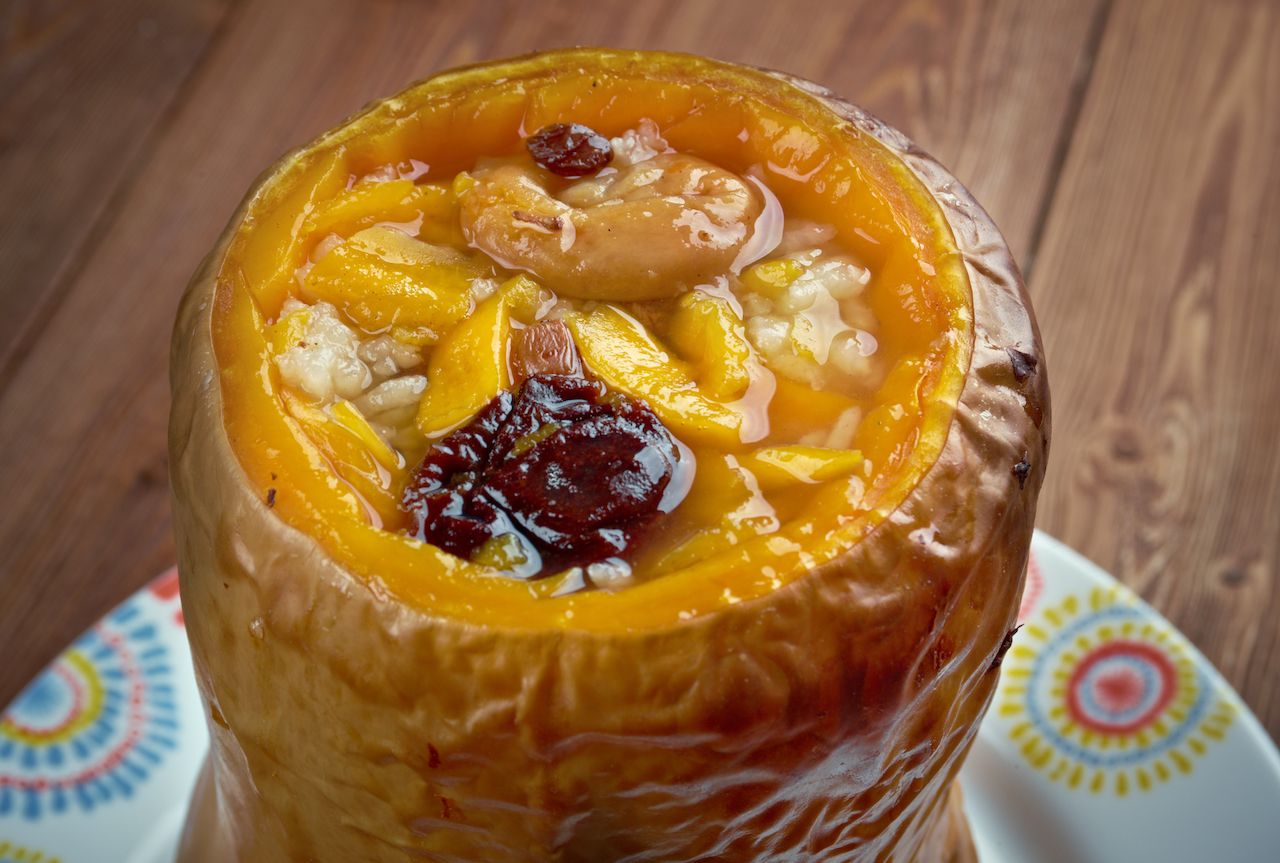 Christmas, New Years, and other celebratory occasions in Armenia are all about this stuffed pumpkin dish, which combines rice with dried fruit like raisins, apricots, dates, and prunes, as well as nuts like walnuts or almonds for the filling. A generous spoonful of honey is also customary. The word ghapama refers to food cooked in a covered pot in Armenia; in this case, the vessel is a pumpkin that has had the top removed, been cleaned out, and baked until soft. Be careful not to overcook the rice initially as it’ll go back in the oven at 350 degrees Fahrenheit for about an hour once stuffed inside the pumpkin. Ghapama is a big deal in Armenia, so much so that there’s a song about it. For a double dose of culture when preparing this festive dish, blast this while you toil away in the kitchen.

Sweet, syrupy calabaza en tacha is a candied pumpkin dessert that features heavily in Mexico’s Día de Muertos, or Day of the Dead, celebrations. It’s traditionally made with pumpkins that have a tougher skin as three-inch sections are left to simmer in boiling water flavored with cinnamon, orange juice and zest, and brown sugar cane until the rind is soft. For the most authentic preparation, use piloncillo, a minimally processed sugar common in Latin American countries. After the pumpkin pieces are tender, remove them and reduce the remaining liquid down into a thick syrup. Drizzle the sugary sauce on top and serve with a scoop of vanilla ice cream to complete the dish.

Beer8 Pumpkin Beers Made With Real Pumpkin
Tagged
Food + Drink Vegetarian
What did you think of this story?
Meh
Good
Awesome