Since the Black Lives Matter movement of 2020, racism in art has been brought back to the forefront. Around the world, statues and monuments depicting colonial figures or glorifying racist ideas have been defaced, toppled, and even destroyed in the hopes that people and countries finally come to terms with their troubled pasts. Here are 10 such racist statues and monuments that were taken down, replaced, and moved in 2021. 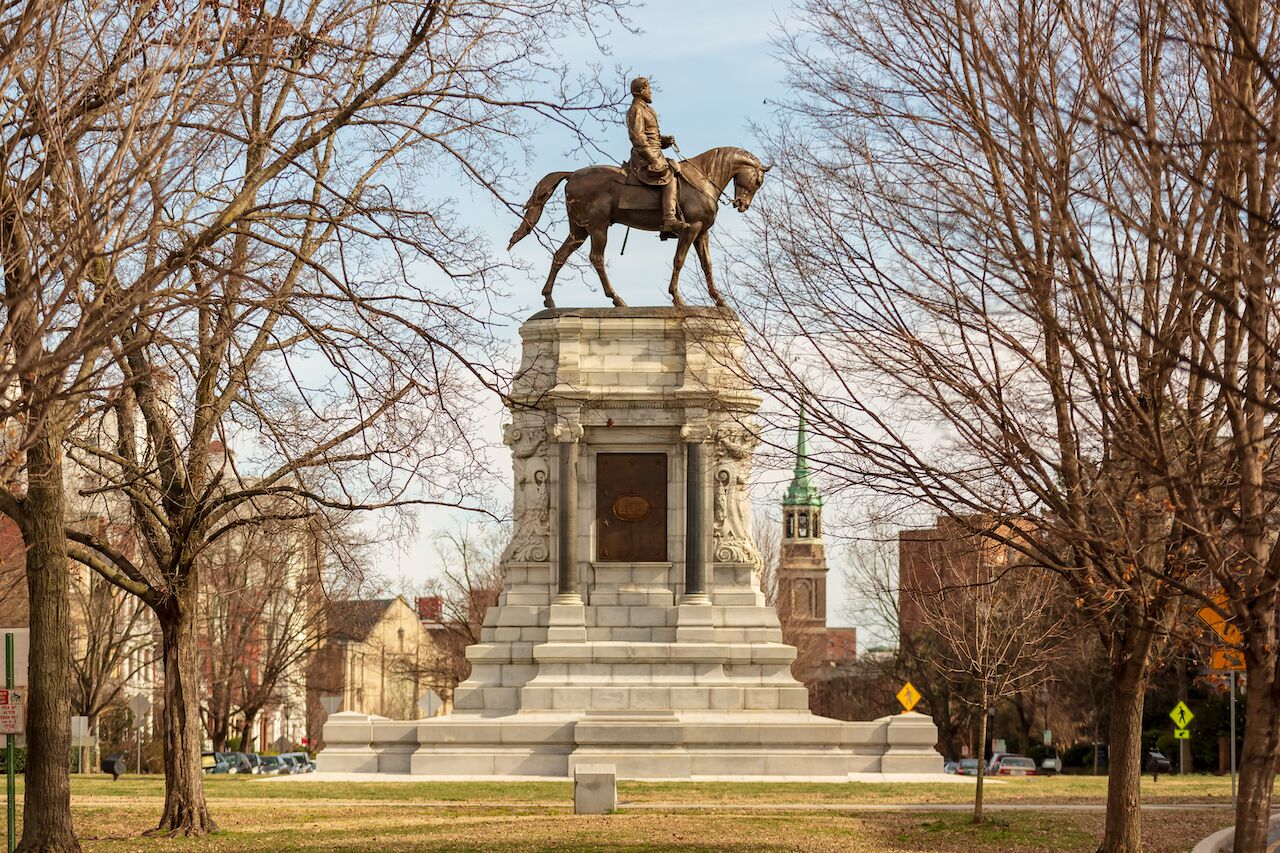 In the midst of nationwide protests after the killing of George Floyd, Governor Ralph Northam of Virginia announced in June 2020 that a statue of Robert E. Lee, the Confederate army commander during the American Civil War, would come down. The equestrian memorial was the largest of five Confederate statues that loomed on Monument Avenue, the grand boulevard that defines Richmond, VA, once the Confederacy capital.

On September 2, 2021, the Virginia Supreme Court ruled that the racist statue in Richmond, VA, would be removed. The 21-foot-tall bronze sculpture was lifted from its pedestal on September 8, 2021, 131 years after it was first erected. A time capsule created by Paul DiPasquale, a Richmond-based sculptor, was placed near the pedestal. It holds 39 artifacts representing the theme of racial justice and the nation’s and Virginia’s reckoning with racism. The enormous pedestal with graffitied messages will also be removed by the end of December 2021.

Sir John A. Macdonald, the first Prime Minister of Canada (1860-1890) is credited with building modern Canada, but he is also infamous for putting into motion cruel cultural assimilation practices against First Nation people. His creation of the residential schools system led to the forced removal of thousands of Indigenous children from their families. The New York Times reported on August 17, 2021 that since May 2021, the remains of more than 1000 people, mostly children, were discovered in unmarked graves on sites of former residential schools in British Columbia and Saskatchewan.

In April 2021, a statue of John A. Macdonald was removed from Victoria Park in Regina, Saskatchewan. The city of Charlottetown, Prince Edward Island, voted unanimously on May 31, 2021 to remove his statue from the city’s downtown. It was brought down quietly at 6:30 AM on June 1, 2021. In Kingston, Ontario, where Macdonald practiced law and served as an alderman before representing the city in the Canadian Parliament, the City Council voted 12-1 in June 2021 to remove his statue from City Park where it had been on display since 1895. With a group of around 100 Indigenous people and their supporters cheering, the First Prime Minister’s two ton likeness was moved by a construction crew on June 18, 2021, to Cataraqui Cemetery where he is buried. 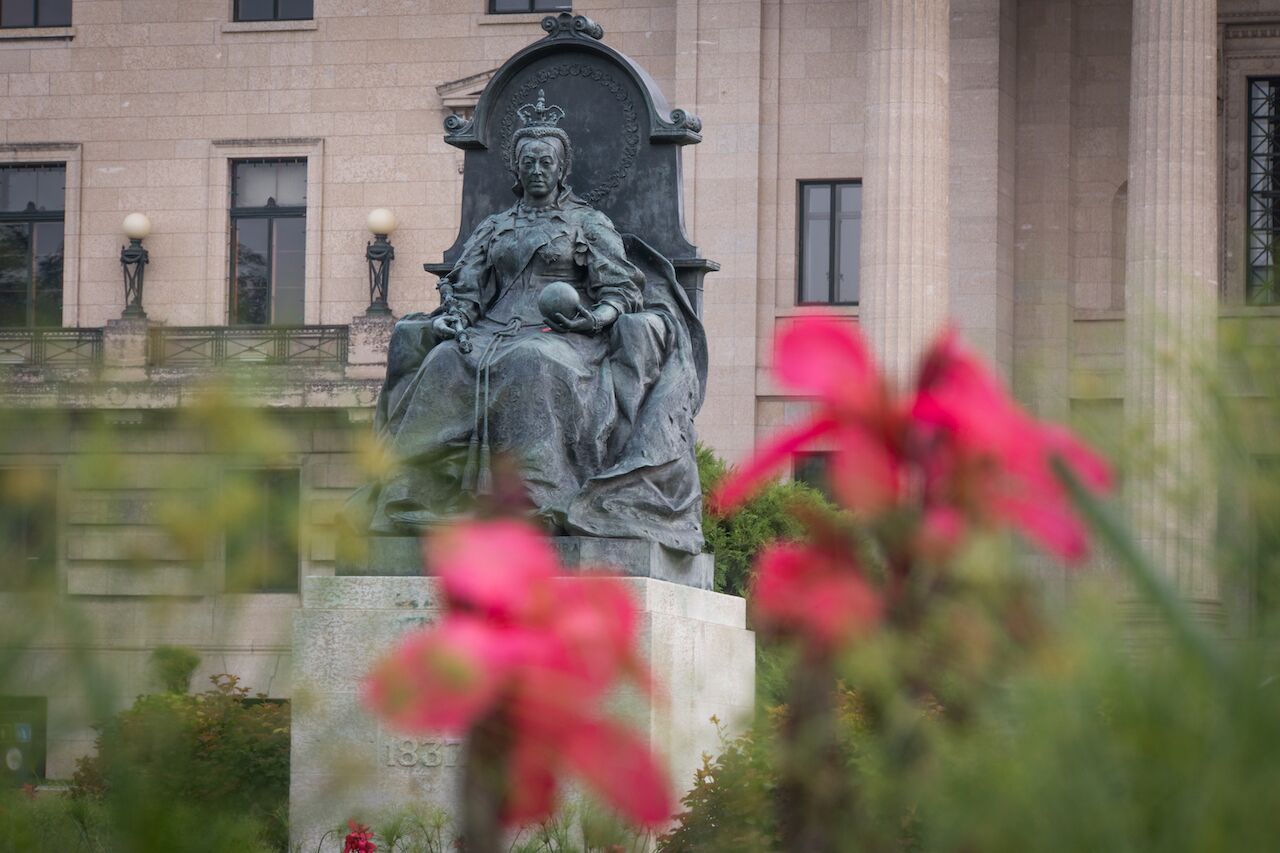 In May and June 2021, outrage grew over the discoveries of remains and unmarked graves of close to 1000 Indigenous children at the sites of former residential schools across Canada. Queen Victoria was the reigning monarch at the time the Canadian government enacted its residential schools policy. The seated figure of the British queen who reigned over the British Empire for 63 years had been in front of the Manitoba Legislative building in Winnipeg since 1904.

On the occasion of Canada Day, July 1, 2021, the statue of Queen Victoria was toppled. The Winnipeg Free Press reported that people surrounded the statue, wrapped it in ropes, pulled it off its base, and covered it in red hand prints. The statue’s head was removed though it was recovered the next day from the Assiniboine River. A plaque reading, “We were children once. Bring them home” was left behind on the base. The toppled statue was covered with a Canadian flag on which “We were children.” was written in black marker. Not far from the Victoria statue, a statue of Queen Elizabeth II, the current head of state, was also pulled down from its base and covered in handprints and red paint. 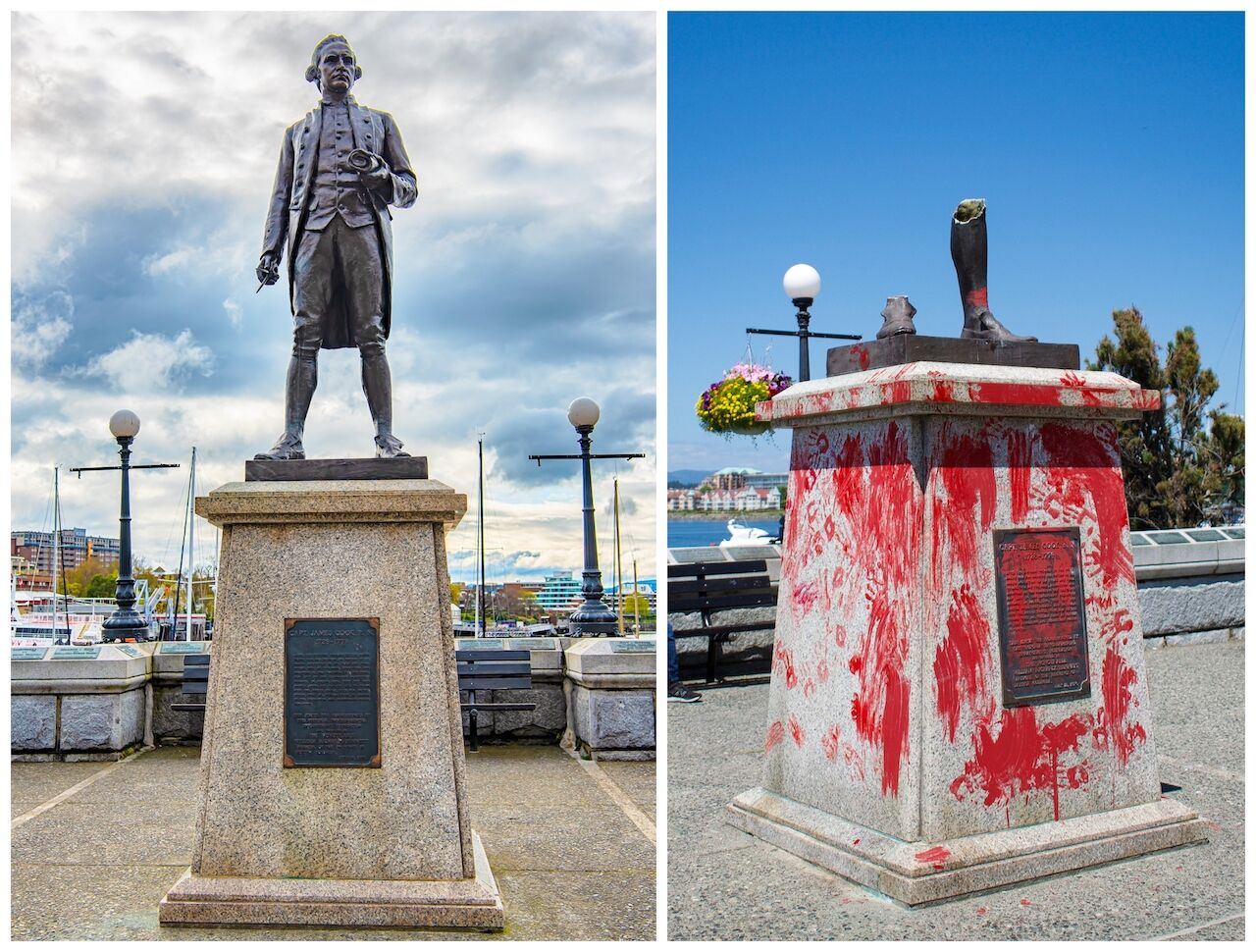 Captain James Cook was a British seafarer, explorer, and mapmaker. In 1778, he sailed along the west coast of Canada trying to chart a northern route from the Pacific to the Atlantic Ocean. He anchored in Nootka Sound, British Columbia, visiting and mapping areas, and renaming them, wiping out their Indigenous names.

The bronze likeness of the explorer has stood across the Empress Hotel in Victoria, British Columbia since being commissioned in 1976. Vancouver City News reported that on July 1, 2021, the statue was hauled forcibly off its pedestal. It broke into pieces and was thrown into the ocean by a gathered crowd. Left behind in its place were several wooden red dresses, a symbol for murdered and missing Indigenous girls and women, while the pedestal where a statue leg still remained was covered with red handprints and splashes of red paint. The statue was later recovered with its head missing.

Following the 2020 Black Lives Matter movement, in January 2021, the City of London, decided to remove statues of Sir John Cass and William Beckford from the Guildhall, headquarters of the City government of London, in Moorgate. A 17th-century merchant and a politician, Sir John Cass heavily invested in the Royal African Company and amassed wealth through the transatlantic slave trade. William Beckford, twice the Lord Mayor of London in the late 1700s, owned 3000 slaves and 13 plantations in Jamaica.

In January 2021, the City of London Corporation voted to remove the racist statues from London and replace them with new artwork memorializing the slave trade. However, in October 2021, the city changed its plan and voted to keep the statues in place and explain them with a plaque. According to Reuters, Douglas Barrow who chaired the group said it was important to “acknowledge both Cass and Beckford and the City’s evident role and involvement in the atrocities of the transatlantic slave trade.” A part of the UK’s new “retain and explain” policy, it keeps in place controversial historical statues and provides added context with explanatory plaques. 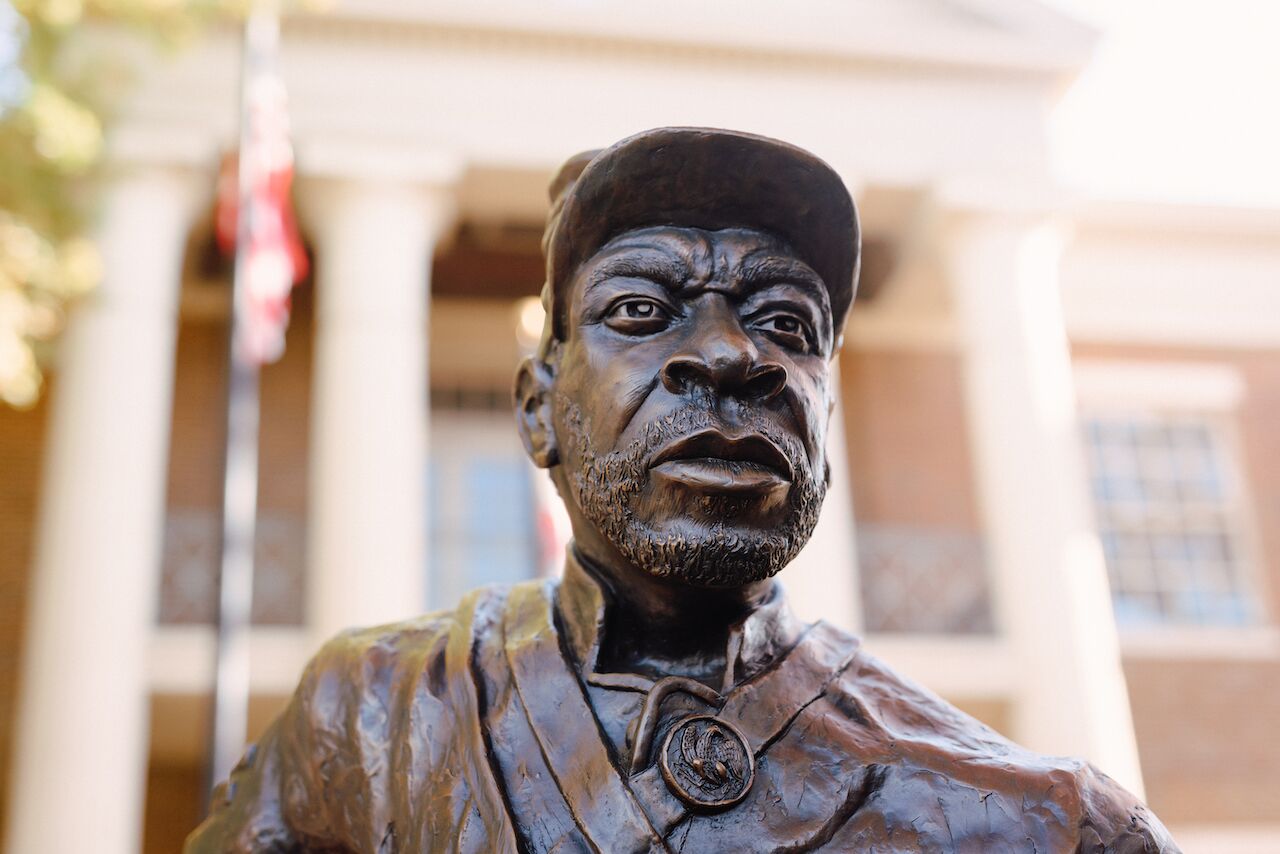 The Confederate Monument in Franklin, TN, had stood tall on the public square since 1899. It showed a soldier nicknamed “Chip” atop a 37-foot high column. The statue celebrated the Confederate soldiers who died in the Battle of Franklin during the American Civil War.

There was considerable social tension around this representation of the Confederacy. It failed to mention the 12,000 enslaved people who lived in the area, the city’s slave market, or even the attrocious public lynchings that took place there. The Fuller Story Project, an initiative by a group of local pastors and a historian, aimed to correct this failure. The effort culminated with the unveiling of a new statue of a United States Colored Troops soldier in October 2021. The statue, “March to Freedom”, is the work of Joe Frank Howard. It honors enslaved men who enlisted in the segregated part of the Union Army. The statue is seven-foot tall and faces the Confederate monument.

Thomas Jefferson, the third American President and the principal author of the Declaration of Independence has a controversial legacy. He enslaved more than six hundred people at his plantation in Virginia, Monticello, and fathered six children with Sally Hemings, a woman he enslaved.

A seven-foot-tall statue of Jefferson has stood in the New York City Hall chamber since 1833. For about two decades, Black, Latinx, and Asian council members had pushed for the statue’s removal with no success. In October 2021, city officials voted unanimously to remove the statue from the chamber. In November 2021, the New York City Public Design Commission unanimously approved the plan to relocate the statue to the New York Historical Society. It was to be placed in public areas with no ticket requirement. It will be displayed in the lobby for six months beginning in April 2022 and then placed in the museum’s reading room on a 10-year loan agreement, as reported by The New York Times. 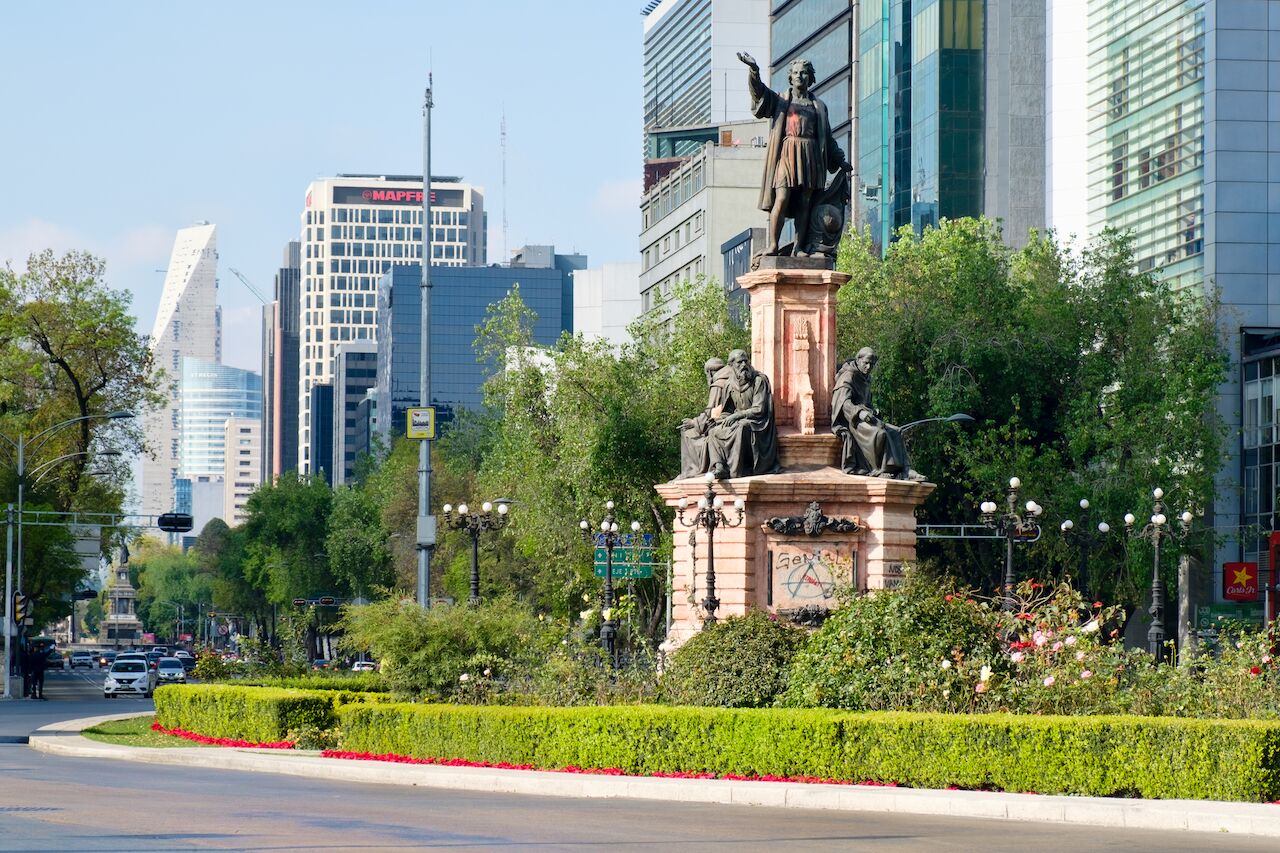 Christopher Columbus, whose four transatlantic voyages to the Americas in the 15th century led to genocide, colonization, and exploitation, has long been a controversial figure.

As mentioned in The New York Times, in October 2021, Claudia Sheinbaum, the Mayor of Mexico City announced that the Christopher Columbus monument on Paseo de la Reforma, a prominent boulevard in the city, would be replaced by a statue of an Indigenous woman, called Young Woman of Amajac. The original Columbus statue was removed for restoration in 2020 as indigenous rights activists had wanted to tear it down. The empty plinth which still stands will hold the new statue which will be much taller than the original monument. 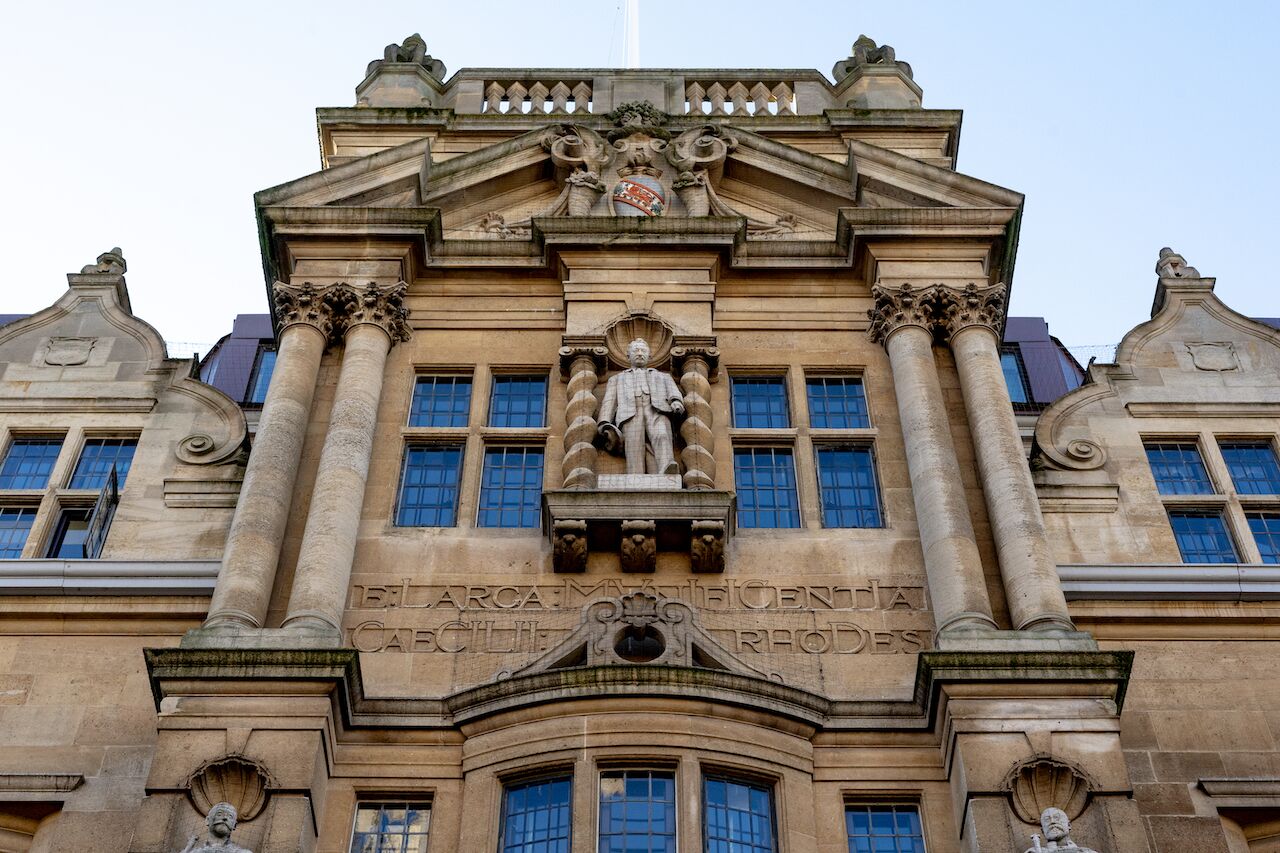 Cecil Rhodes, a 19th-century British imperialist, politician, and businessman in South Africa expanded the British Empire in Africa by annexing lands that are today the countries of Zimbabwe and Zambia. The founder of the De Beers Diamond company and the prestigious Rhodes Scholarship is also a highly controversial figure, often considered to be the face of colonialism. Oxford University’s Oriel College in England, Rhodes’ alma mater, has long struggled with a decision about its Rhodes statue. The statue is placed at the very top of the facade of the college building that was built with money from his will.

In the wake of the Black Lives Matter movement, there were demands to remove the racist statue in Oxford. At first the governing body of Oriel College agreed to the proposal. But in May 2021, the college reneged on its promise, refusing to take down the statue. The college instead opted to place a plaque which read in part, “Rhodes, a committed British colonialist, obtained his fortune through exploitation of minerals, land, and peoples of Southern Africa. Some of his activities led to great loss of life and attracted criticism in his day and ever since.” 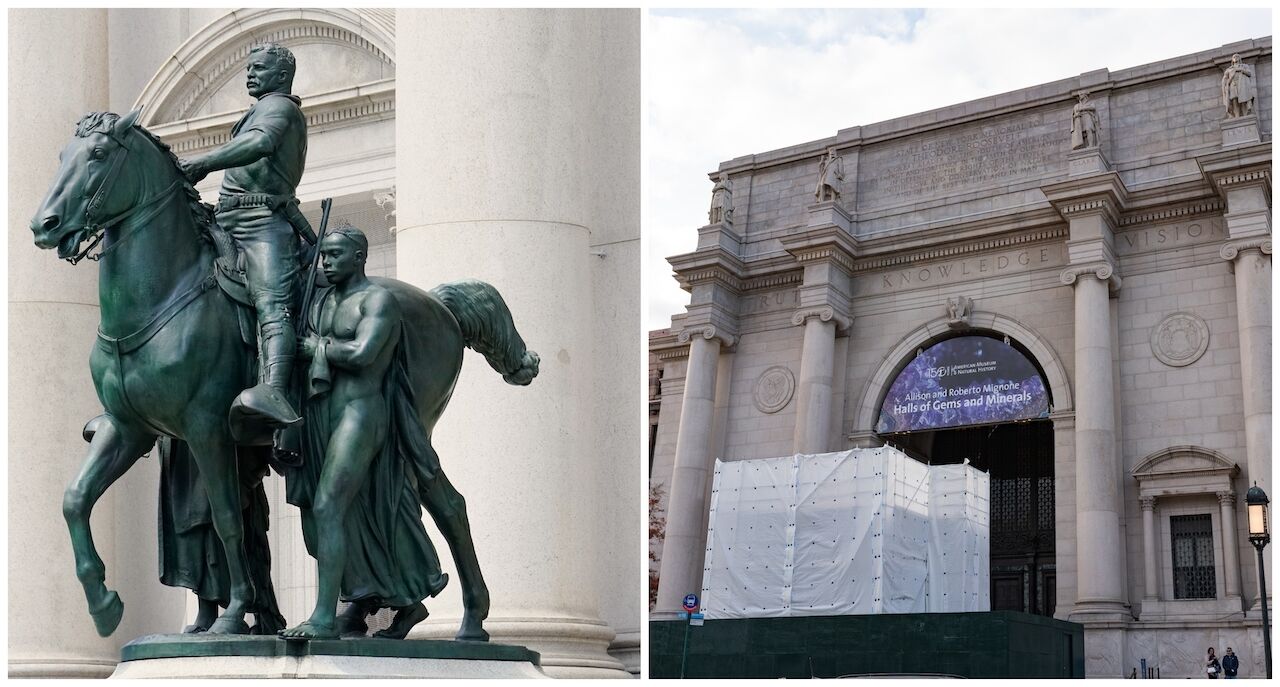 The towering bronze statue of Theodore Roosevelt, the Governor of New York (1899-1900) and the 26th President of the United States (1901-1909), has stood on the steps in front of the American Museum of Natural History, a city-owned property in New York City since 1940. It depicts him astride a horse while below him a Native American man and an Black man flank him on either side. The statue has been controversial as it clearly conveys racial hierarchy and colonization.

The beginning of the push for the racist statue’s removal commenced in 2017 following the deadly white supremacist Charlottesville rally. The museum held an exhibition titled, “Addressing the statue” in January 2019 that provided context and interpretation towards the history of the statue. On June 21, 2020, the museum requested its removal. The relocation of the statue was approved unanimously by the New York City Public Design Commission on June 21, 2021. On November 26, an agreement was reached between the city and the Theodore Roosevelt Presidential Library in Medora, North Dakota, for a long-term loan of the statue, once the library opens in 2026. Until then, the equestrian statue is slated to be kept in storage and a plaque will be installed in its place.

News6 Racist Statues Around the World That Are Finally Being Taken Down
Tagged
Activism Culture
What did you think of this story?
Meh
Good
Awesome