Recently, the Wisconsin Department of Health Services issued a rather unusual warning to the residents of Wisconsin: Stop eating raw meat sandwiches. Raw ground beef, which is processed using several different types of machinery in a factory, is susceptible to cross-contamination from bacteria that can sometimes cause fatal Salmonella and E. coli infections (the CDC made a similar ruling in 2013). This is common knowledge that most people thought was already well understood. The department’s pronouncement — and various reactions to it from Wisconsinites who refuse to give up the sandwiches — quickly went viral.

In a series of Facebook comments responding to the department’s post, one user declared that he would “eat it on any day that ends in Y” while another swore that in 60 years of eating raw meat sandwiches he’s never become ill. The first reactions were twinged with disgust and disapproval; after all, it does not seem, at first blush, exactly normal to eat uncooked ground beef mashed between two pieces of bread.

News headlines all over the internet scolded Wisconsinites for eating so-called “cannibal sandwiches.” But not everyone in Wisconsin has tried or even heard of cannibal sandwiches; in fact, one Matador editor from Wisconsin had never heard of the dish until it went viral and says several of her friends were just as shocked to learn about the supposed local tradition with a disturbing moniker. Unfortunately, it didn’t take long for misconceptions about this Wisconsin delicacy to circulate around social media.

The truth about cannibal sandwiches

Sometimes also called tiger meat, raw ground beef sandwiches aren’t so strange when you consider that many cultures from all over the globe incorporate raw meat into their cuisines. Kibbe nayyeh is a Lebanese dish made of raw lamb. In Korea, yukhoe refers to raw beef topped with egg yolk. Wisconsin’s tiger meat might even favorably be compared to steak or tuna tartare, though those dishes are, to be fair, usually prepared from fresh, high-quality cuts of meat — not pre-processed and packaged ground meat.

Still, it’s not exactly true that Wisconsinites are picking up random packs of ground beef in order to prepare a sandwich similar to one you might pick up at a deli counter or a sub shop: This is a thin layer of raw ground beef spread on small square of toast, seasoned with salt and pepper, and topped with a sprig of parsley topped with a few raw onions.

“It was definitely a ‘special occasions only’ thing, and it was usually on a party platter for the more working-class side of my family at things like Christmas,” Courtney, a freelance writer who grew up in southeastern Wisconsin and is now based in Germany, tells me. “My grandpa [was] a steelworker, so it was [out] to impress him. My parents treated it like a delicacy so it was rather rare to have.”

Courtney says her family didn’t think too much about health guidelines 30 years ago when she first tried it, but she recalls that there was ground beef marked specifically for this purpose at the grocery store. Those memories are echoed by Glenn, another Wisconsin resident with whom I spoke. Glenn grew up in Wausau (though he lives in Cedarburg now) and remembers that “wildcat,” as it was referred to in his family, was “sold pre-packaged at the supermarket butcher, already seasoned and with onions mixed in.” He says that due to health concerns that practice has largely ended within the last couple of decades.

“We’d set it out alongside a loaf of mini marble rye bread,” he recalls. “You’d just scoop a spoonful onto the bread, and it’s a little two-bite snack. It was just around the holidays. During the day, before dinner, there was always a spread of snack foods out: chips, dips, olives, cheese, sausage, crackers, pickled herring. It was in that spread.”

He compares the flavor to a pâté — though it’s not as smooth and creamy, the meat isn’t “grainy or mealy,” either. “Just a clean bite with a little tooth to it,” Glenn says. “The flavor is really a contrast of the caraway in the rye bread, the sharp flavor of the onion, with a little beefy flavor. It’s not quite the same production level as a fancy tartare, but if you’ve had that you get the gist.”

Glenn disliked wildcat as a kid and only came to try it for himself in his 20s, but he says he’d avoid it now because of possible contamination. “I don’t want to go through the trouble of sourcing my own cuts, grinding it, and seasoning it myself, just for a few bites,” he tells me. “I’m by no means opposed to eating it. Just not worth the effort to make sure it’s as safe as possible to consume.”

That safety-first attitude might not be adopted by all Wisconsinites who grew up eating tiger meat like Glenn did. In fact, he thinks he might even be willing to eat it again despite health warnings if, he says, “I knew and trusted the butcher or prepped it myself.” And he would wager that folks from Wisconsin who once enjoyed tiger meat but gave it up did so not because of the Wisconsin Department of Health Services but because it was discontinued at grocery stores.

“I honestly think that it’s probably convenience rather than health concerns,” he says. 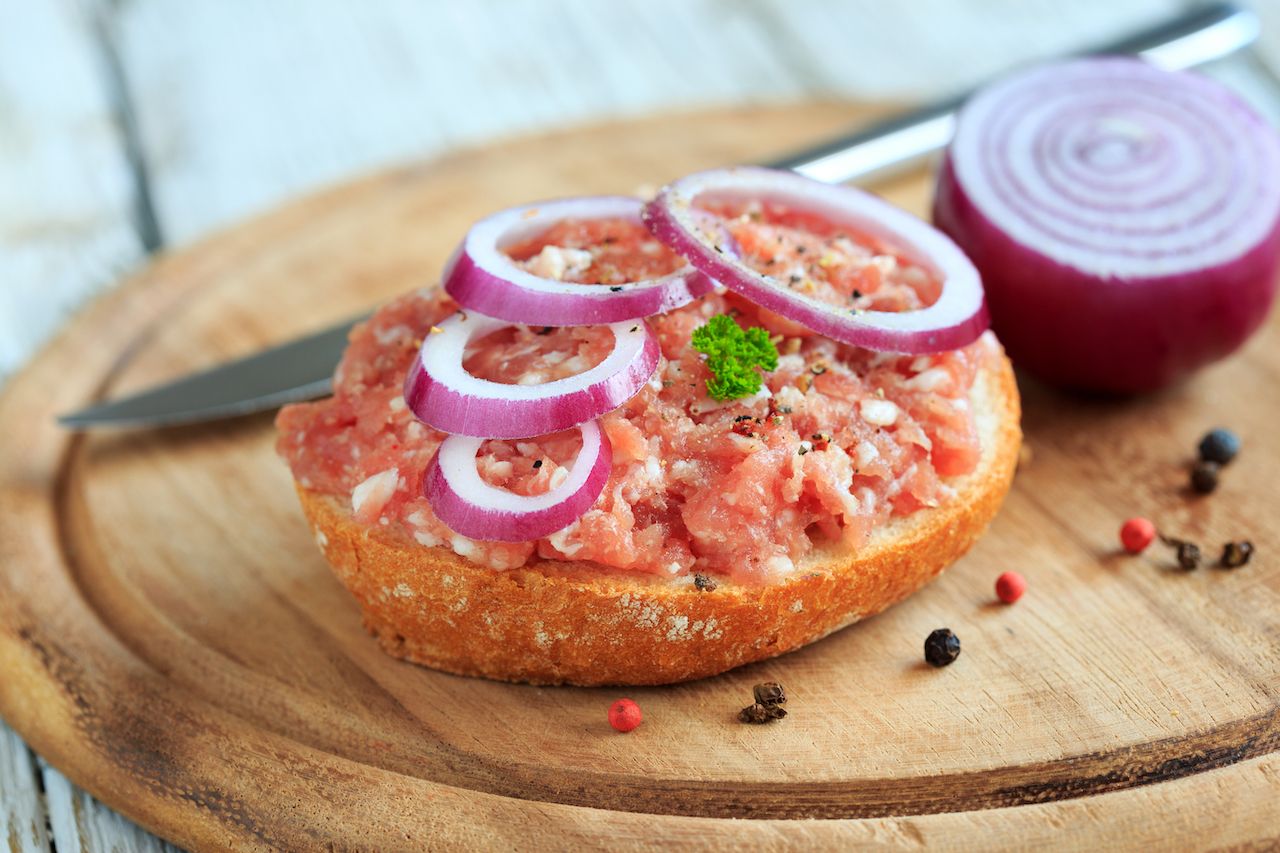 If your family is intent on eating tiger meat this holiday season — or you just want to try it for yourself — there are simple ways to limit your exposure to harmful bacteria. Dr. Zorba Paster, a physician and public radio host, told Wisconsin Public Radio that “The best cannibal sandwich with the lowest risk is if you take steak, or something like steak, and you grind it up. The worst cannibal sandwich is if you simply eat ground beef out of a package because then the risk of E. coli is greater.”

The question remains, however, why some people from Wisconsin are so passionate about their raw meat sandwiches. The answer, as it turns out, is much simpler than you might think: It all comes down to European immigrants to Wisconsin. Tiger meat sandwiches are likely a close relative of mettbrötchen, which is a dish of raw minced pork spread on a bread roll and seasoned with salt, pepper, and onions that’s served in Germany and Belgium. A similar dish called biff tartar is served with pickled beets and capers in Norway, another country with a strong immigrant population in Wisconsin.

“[It’s] definitely a holdover from the German mettbrötchen,” says Glenn. Courtney agrees that tiger meat’s popularity in Wisconsin is owed to its German community; she refers to her grandmother’s family as “OG German immigrants,” relatives who routinely served tiger meat on New Year’s.

Tiger meat has certainly fallen out of fashion (and perhaps that’s for the best; if the health department tells you to do something, you should probably listen), but regardless, it doesn’t deserve the hate or the disgust it received on social media. It’s part of a long tradition of raw meat dishes, which you can find in almost every part of the world, and its legacy is rooted in Wisconsin’s immigrant history. It may not be your first choice for a holiday appetizer, but it’s part of the lexicon of wacky American cuisine, as patriotic as frog eye salad and hot Dr Pepper.

Food + DrinkWhy You Have To Travel To Minnesota To Find North America’s True Wild Rice
Tagged
Food + Drink Holidays Wisconsin, United States
What did you think of this story?
Meh
Good
Awesome