The greatest tales are so universal that you can relish the dramatic plot-twists, fiery characters, and profound themes from anywhere in the world. But that doesn’t mean they were hatched out of nothing. It’s instructive, not to mention fascinating, to delve into the places that spawned them.

I’ve made doing so a life-long habit by camping in Ithaka beside the palace ruins of Odysseus, walking in the footsteps of the Icelandic Sagas, and crossing Afghanistan in the wake of a medieval poet. Recently, I traveled around the locations that fairy tales originated and found that many of the places where the tellers lived, loved, and suffered can light up those stories, allowing us to see them anew.

These five places are where you can do the same.

A trip to a witches festival in Germany’s Black Forest 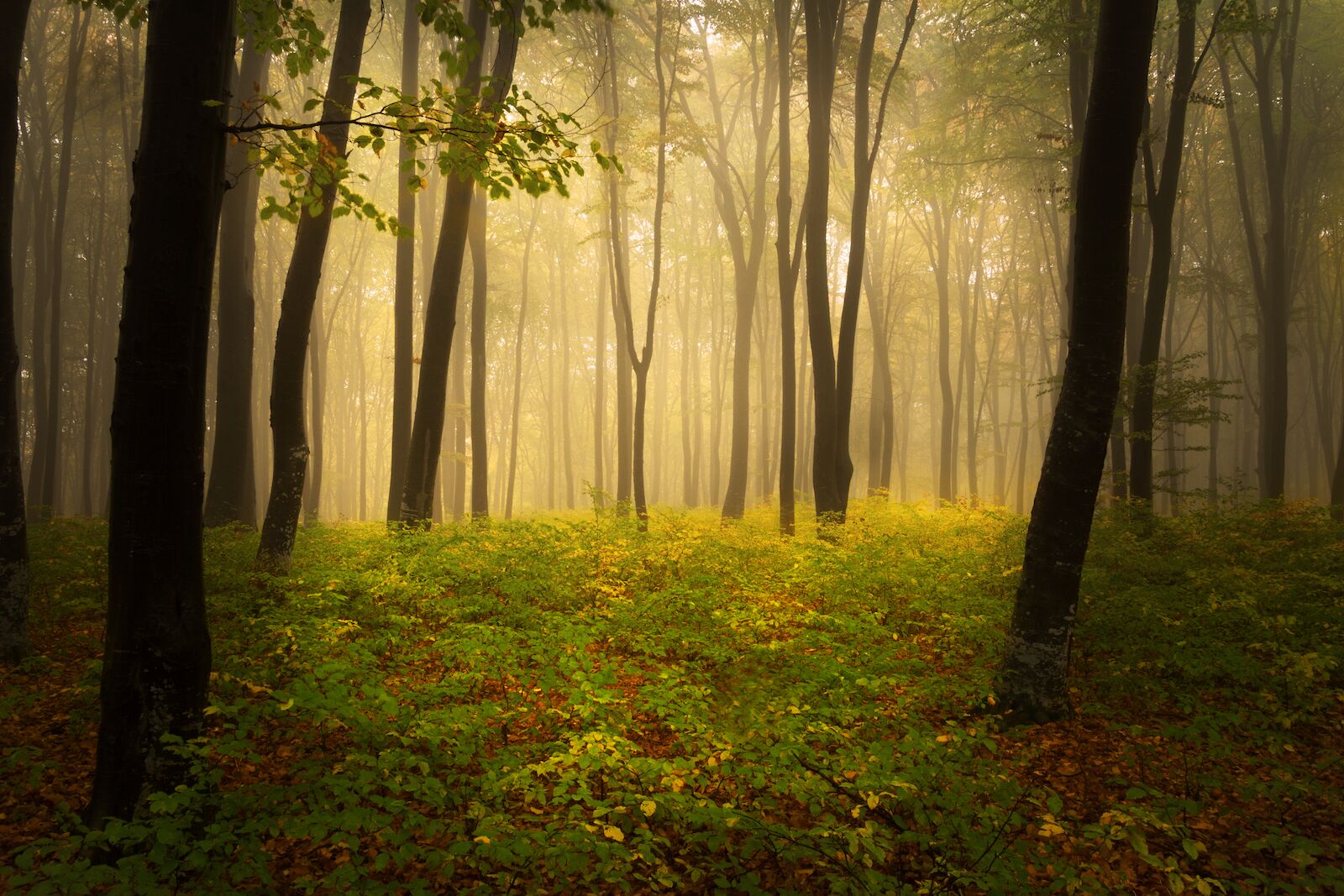 Nowhere screams fairy tales like Germany, the home of the Brothers Grimm, and the German landscape that’s most closely associated with fairy tales is the forest. Tramp between the pine and maple trees of the Schwarzwald, the Black Forest, and those childhood fantasies of witches and wolves and gingerbread houses will press against your vision all over again.

One of the best times to visit is in February, when people compensate for the frosty weather with the traditional pre-Lent festivities of Fassnacht. A “witches’ Sabbath” takes place every year in the village of Waldkirch. Here, a guild of local “witches” in intricately carved wooden masks, black bonnets, and polka-dot skirts brandish their broomsticks around a roaring fire, howling at the crowd under an eerie explosion of demon-red fireworks. Most of the crowd are dressed in their own fancy-dress costumes, with horror and fantasy the dominant themes. Waldkirch during Fassnacht is one of the few places where you can see a fairy tale witch zip-wiring over a Jedi, while a fairy tale king and queen clink beer steins with Stasi officers and the monster out of Predator.

A trip to Naples, where Europe’s fairy tales began 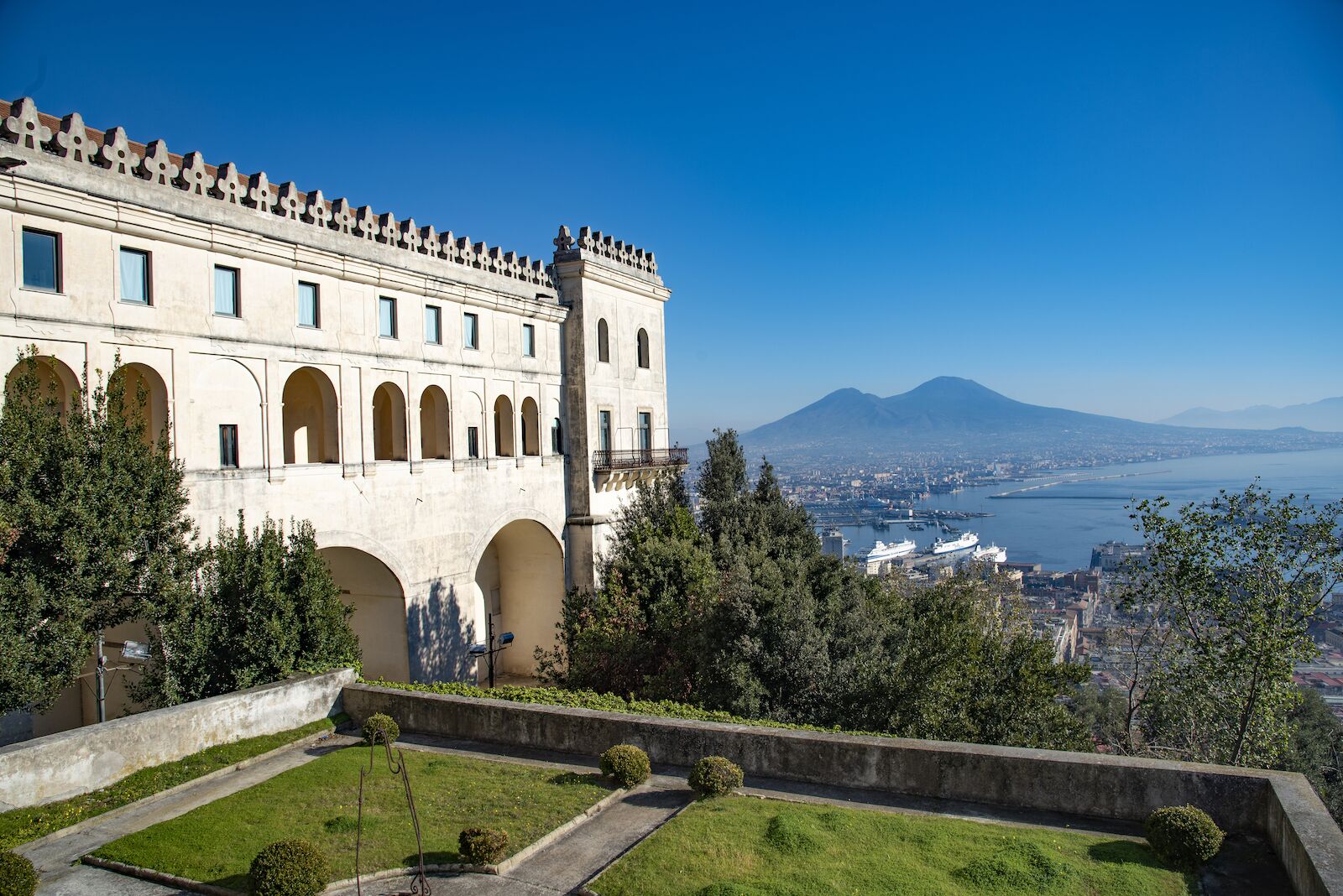 Germany and Northern Europe might be the heartland of many Western fairy tales, but the story really began farther south in Naples. Europe’s first fairy tale collection was published in the 1630s and written by a poet from Naples called Giambattista Basile. You only have to spend a few hours in this mercurial city to realize it’s haunted by magic, from the talismanic red horns (or cornicelli) mounted on doorways to images of the strega (Italian witches) on liquor bottles.

Outside Saint Martin’s Charterhouse, on the Vomero hill, there’s a perfect view of Mount Vesuvius. From there, you can plunge between the laundry lines and mopeds of the Spanish Quarter, down among the medieval churches and shrines of Via dei Tribunali, past Caravaggio’s painting “Seven Acts of Mercy” (which shows the grisly vivacity of the Neapolitan seicento), all the way to the Cerriglio Tavern, where diners dip their heads over octopus meatballs and mussel soup at the end of Naples’s narrowest alley.

Basile and Caravaggio both drank there, although Basile was treated a little better: he called it “the funhouse… where laughter abounds.” Caravaggio, on the other hand, had to flee after being ambushed by his enemies and wounded in the face. That’s Naples for you. The combination of violence and high spirits is inscribed into Basile’s most famous tales, such as The Old Woman who was Skinned, which does exactly what its title promises, or Europe’s oldest full-length version of Cinderella, in which the heroine murders her step-mother by breaking her neck under the lid of a clothes chest.

A trip to Paris, where fairy tales turn out to be true 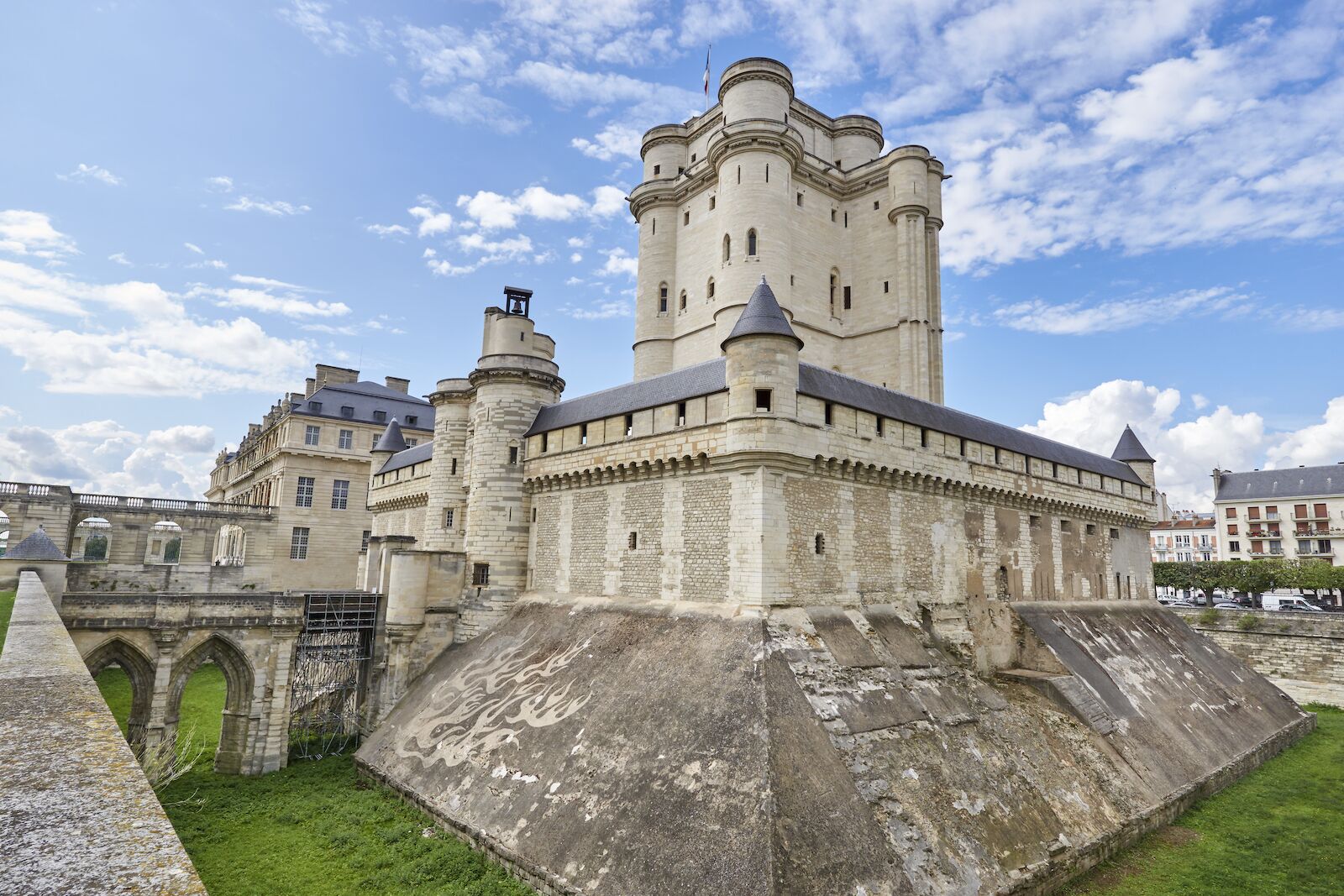 A suburb of Paris: parapets do a jigsaw dance around blockhouses, a Gothic chapel speared by grimacing gargoyles and Europe’s tallest fortified tower. Welcome to the Chateau of Vincennes, the childhood home of the Sun King, Louis XIV, and later a place of incarceration for disgraced VIPs, including the scandalous Marquis de Sade. Among its many inmates was the novelist Claude Prosper de Crébillon, whose satirical and erotic works landed him in trouble with the authorities. While confined in Vincennes, he managed to make friends with his cellmate: a giant rat that had been swollen by the discarded meals of the previous incumbents.

When it comes to friendship between humans and grisly creatures, Crébillon knew the person who spun the most beloved and imitated version: His father lived with the author of Beauty and the Beast. Her name was Gabrielle-Suzanne Barbot de Villeneuve, and she published her story in 1740. Gabrielle-Suzanne drew on her own topsy-turvy life living with Crébillon Senior, who was famously reclusive, labeled a “vandal” by Voltaire, and was known for keeping dozens of stray cats and dogs. She also drew from the archetype of monster groom stories that had been circulating for millennia. She gave Beauty and the Beast the eighteenth century French spin that’s been attached to it ever since.

But her Beast’s palace doesn’t only draw on gothic Vincennes. It’s also influenced by the most glamorous palace of the day, with its statues and orange trees, immaculately trimmed hedges and shiny mirrors: the world-famous palace of Versailles. 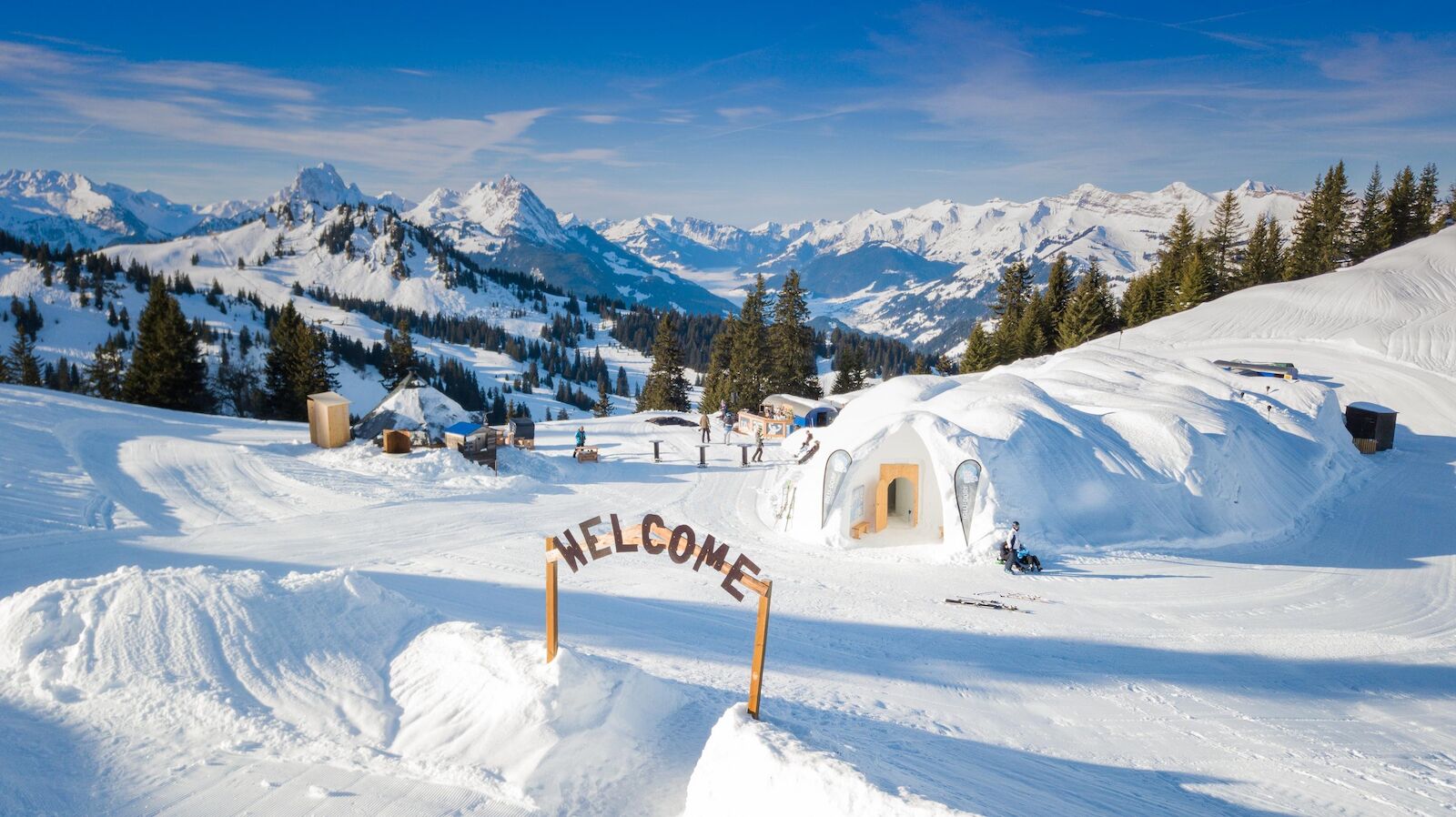 In Lapland, Finland, where the snow is so thick it looks as if the trees are floating in the sky, reindeer pummel the ground with their hooves and fishermen tiptoe in search of ice-holes. This is the landscape of Hans Christian Andersen’s masterpiece The Snow Queen.

Born into dire poverty by a cobbler and a washerwoman in the Danish city of Odense in the early nineteenth century, Andersen left home at 14. He courted the high and mighty, and made it as a writer thanks to his extraordinary tenacity, a little luck, and a super-charged imagination.

His childhood home in Odense can still be visited, and he wrote in his diaries that he based the opening of The Snow Queen on it. But for the bulk of the adventure in the tale, Lapland is the inspiration. Head there today, and you can glimpse the inspiration behind Andersen’s tale. You can meet up with reindeer herders around Lake Inari; ride a snowmobile to the glades where they feed their herds and scatter food pellets onto the snow; and visit a snow castle in Kemi, on the Gulf of Bothnia, where every year a palace is molded out of snow and ice harvested from the frozen sea.

Stand in the corridors of the Snow Castle, under the parapeted walls, the domed roofs, the walls carved with fantasy characters by the chisels of snow artists, and it’s easy to imagine yourself as Gerda, looking for her dear friend Kai, hoping to melt the shard of ice the Snow Queen has embedded in his heart.

A trip to India for the birthplace of many modern tales 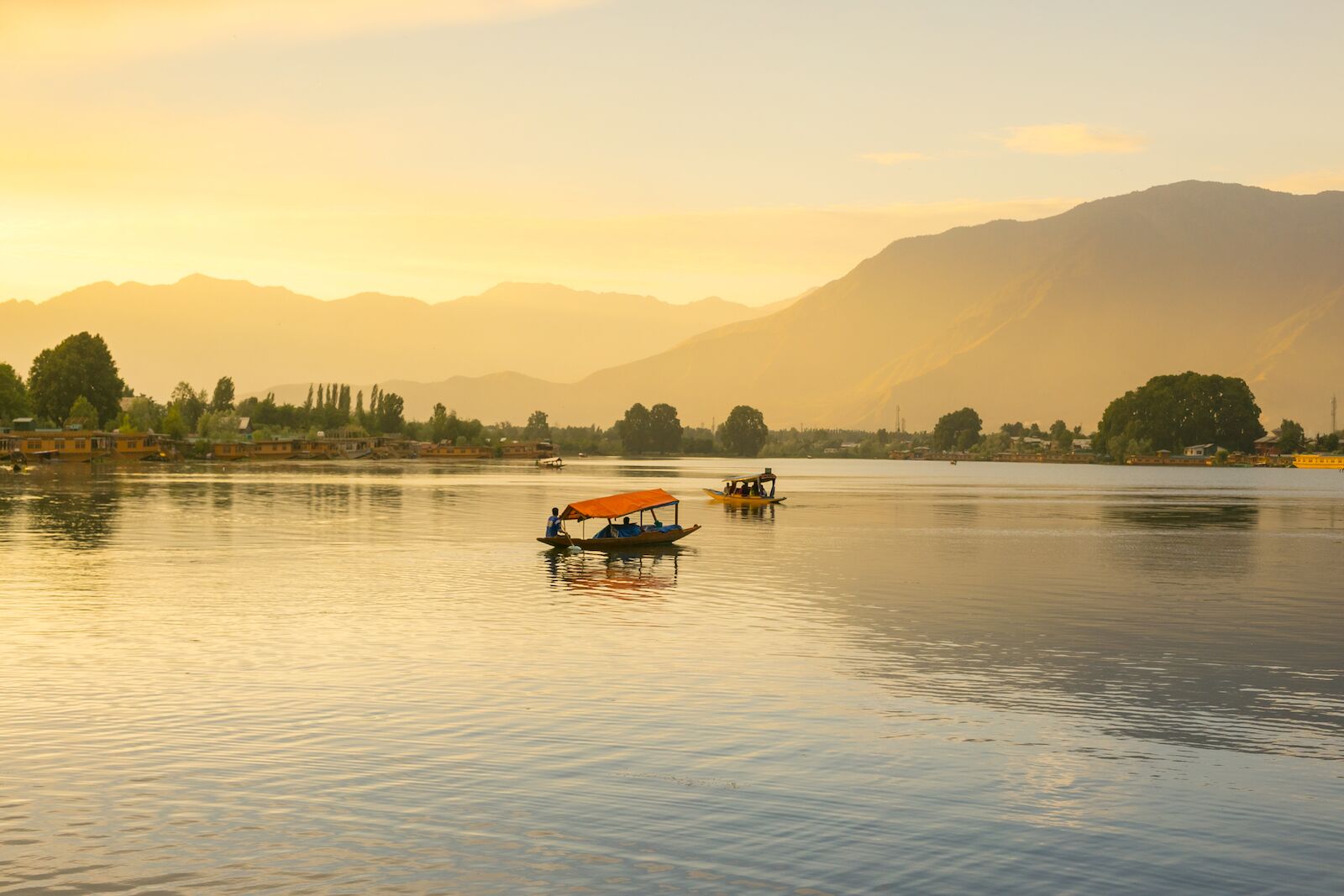 Fairy tales have been imagined all around the world, and if we’re looking for some of the oldest versions, the region to visit is the Indian subcontinent. In the eleventh century, a Kashmiri court poet called Somadeva compiled a collection of magical tales for his queen to soothe her during a time of conflict. Among his tales, there’s a gambler who rode a talking bird to a city of gold, a shipwrecked sailor who dove to an underwater city, a king who discovered a city of wooden automatons, and a princess transformed into a swan decorated in jewels. Somadeva’s tales have traveled all over the world: later versions can be found in the 1001 Nights, in Chaucer’s Canterbury Tales, Boccaccio’s Decameron, and even in the tales of Hans Christian Andersen.

The stories told by Somadeva are agile and porous, splitting apart for new stories, as interconnecting and fluid as the riverways that ripple around Kashmir. There’s nothing like floating over the lotus leaves of Srinagar’s Dal Lake in a doonga, listening to the chatter over the spinach and purple-topped turnips of the floating vegetable market, to feel the atmosphere of these tales. Like the traders chinwagging over their produce, Somadeva believed that anybody could tell a tale. In his collection, they’re narrated by gods and kings, but also generals and ministers, merchants, thieves, a seller of bedsteads, and even a corpse-animating zombie and demons in a fiery pit. It’s a democracy of storytelling with an exciting message: that stories are for everybody.

Nicholas Jubber’s latest book is The Fairy Tellers: A Journey Into the Secret History of Fairy Tales, available now on Amazon.

NewsName a City and This Search Tool Will Tell You Which Books Are Set There
Tagged
Books Naples, Italy Paris, France India Finland Germany
What did you think of this story?
Meh
Good
Awesome