When visiting Reno, Nevada, one might expect a city kin to Las Vegas that’s full of bustling casinos, gambling, and headline resort performances. But if you get out and explore Reno, you’ll find there’s more than initially meets the eye – especially when it comes to public art.

There are more than 100 murals in Midtown Reno alone. You’ll find them everywhere: on the sides of local businesses, in alleyways, outside parking structures, and even on the floors of plazas. Both locals and city officials place tremendous value on the artists that help create such a vibrant scene.

Reno supports the artwork coming into the city through monetary investment. It uses a two percent room tax on hotels and casinos to commission new work, and the city buys pieces to display. The city’s annual ArtSignals program, for example, turns the city’s 50-plus signal boxes into canvases and pays artists $500 upon completion.

“The fact that funding comes from tourism is a valuable aspect,” says Megan Berner, public art manager for the City of Reno. “Not only because it increases the quality of life for the people living here, but it also draws people to want to come and experience this place because of those unique features,” Berner says. 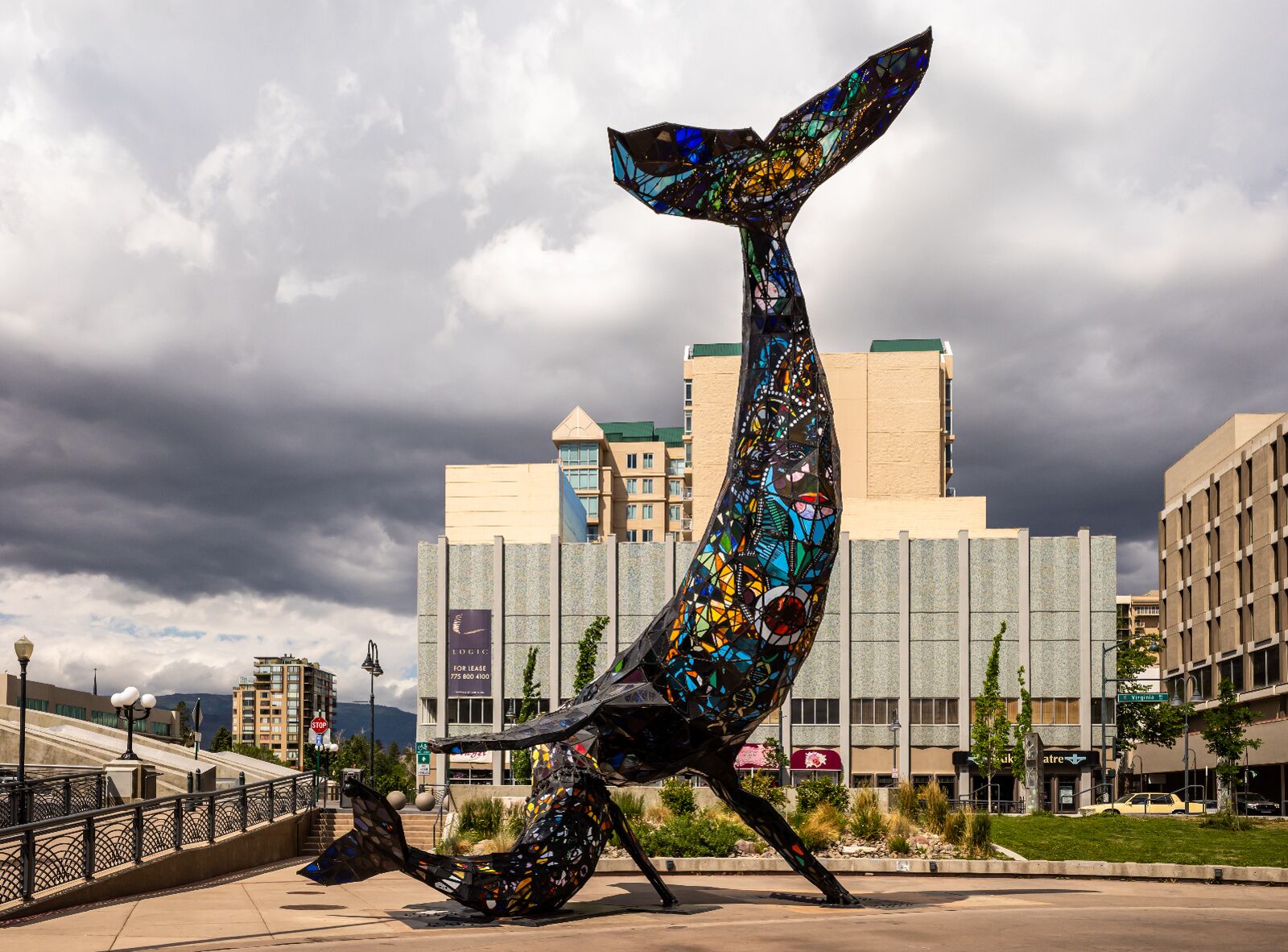 Reno is the closest city to fly into for Burning Man, but if you can’t afford a $400-plus ticket, you’ll find many of the festival’s most beloved pieces have been purchased and put on display by the city. Head to the city plaza to see the 12-foot tall “Believe” letters alongside the “Space Whale,” a giant 50-foot stained glass humpback whale. In Bicentennial Park, you’ll find “Portal of Evolution,” a metal sculpture by Bryan Tedrick first featured at Burning Man in 2009. It adorns flowers sprouted from its base, crowned by a butterfly that moves with the wind. With a second glance, however, there’s more to explore.

“It looks like a butterfly but it’s not a butterfly,” says Geralda Miller, executive director of Art Spot Reno. “It’s just kinetic and I love the movement of it with the wind blowing. I think that I love the fact that so many people don’t see it for what it really is. You know, they see a butterfly, when here it is it’s the female reproductive system. It’s wonderful how beauty is in the eye of the beholder there.” 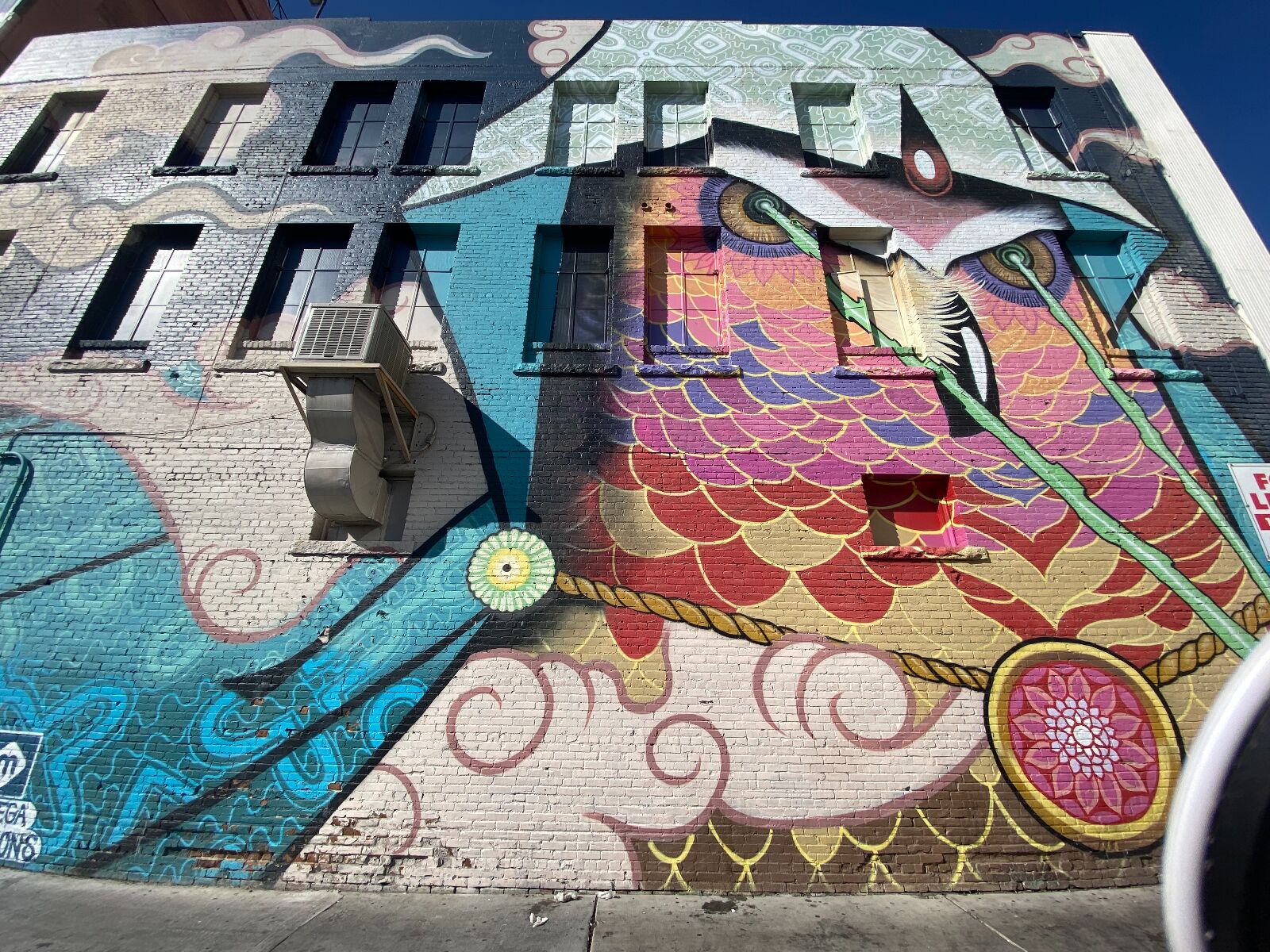 Art Spot Reno is a nonprofit organization dedicated to promoting and providing information and education to artists and the Reno community. Suppose you’re looking for a way to see all of the art in the city – in that case, you can book a street art tour through the organization to not only see all of the fantastic murals and sculptures, but to learn the history of them from a dedicated “burner” and Reno local with such a deep breadth of knowledge about the community. The organization also hosts events like the Mural Expo, where local, national, and international artists come together to paint several walls in just a few days. 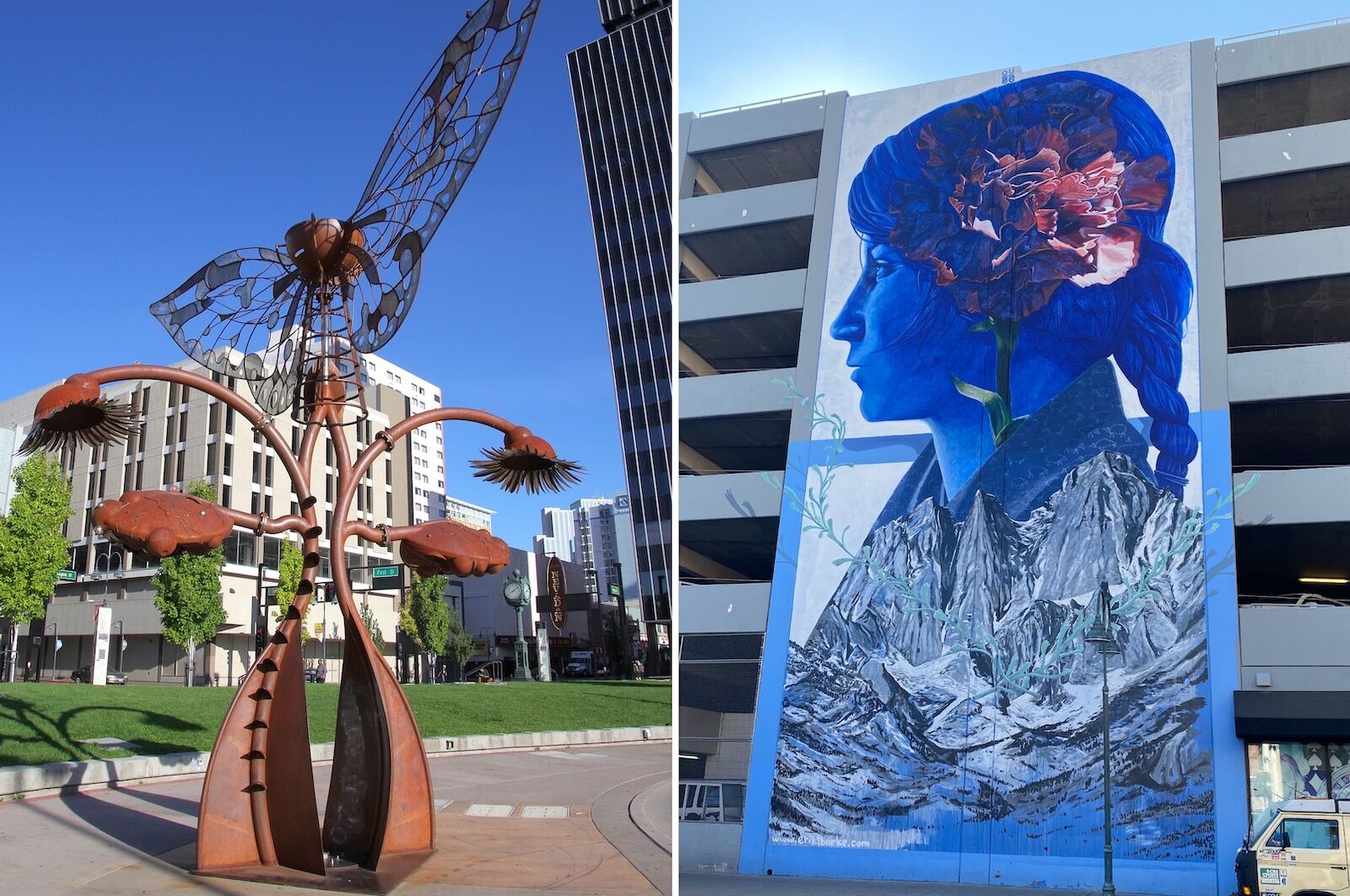 An artist whose work you’ll find over and over again is local artist Erik Burke. He has worked all around the world over the past 20 or so years, with murals in countries like Korea and Italy and work published in places like the New York Times.. But with almost 100 murals across the entire city of Reno, there’s no place like Burke’s hometown to get acquainted with his portfolio. His earliest work in the city was graffiti, ambiguously signed OU with the mural’s number to avoid being caught. Stop by the northern wall of the Whitney Peak parking garage downtown to find OU/36 (post-graffiti era) – “Blueprint of a Mother.” The mural depicts Burke’s wife sprouting from behind Mount Whitney with a flower blooming inside.

“The first permissioned mural I painted in Reno was around 2004,” Burke tells me. “From that point, there were very few murals at all… and now it’s the hip cool thing, and a business that doesn’t have a mural feels left out. It’s creating so many more opportunities for myself and also all these other artists almost 20 years later now. I’ve seen the waves of it and I’ve seen a new generation of artists come up and then another new generation of artists come up underneath that, so it’s interesting to see it all grow and just help out the community.” 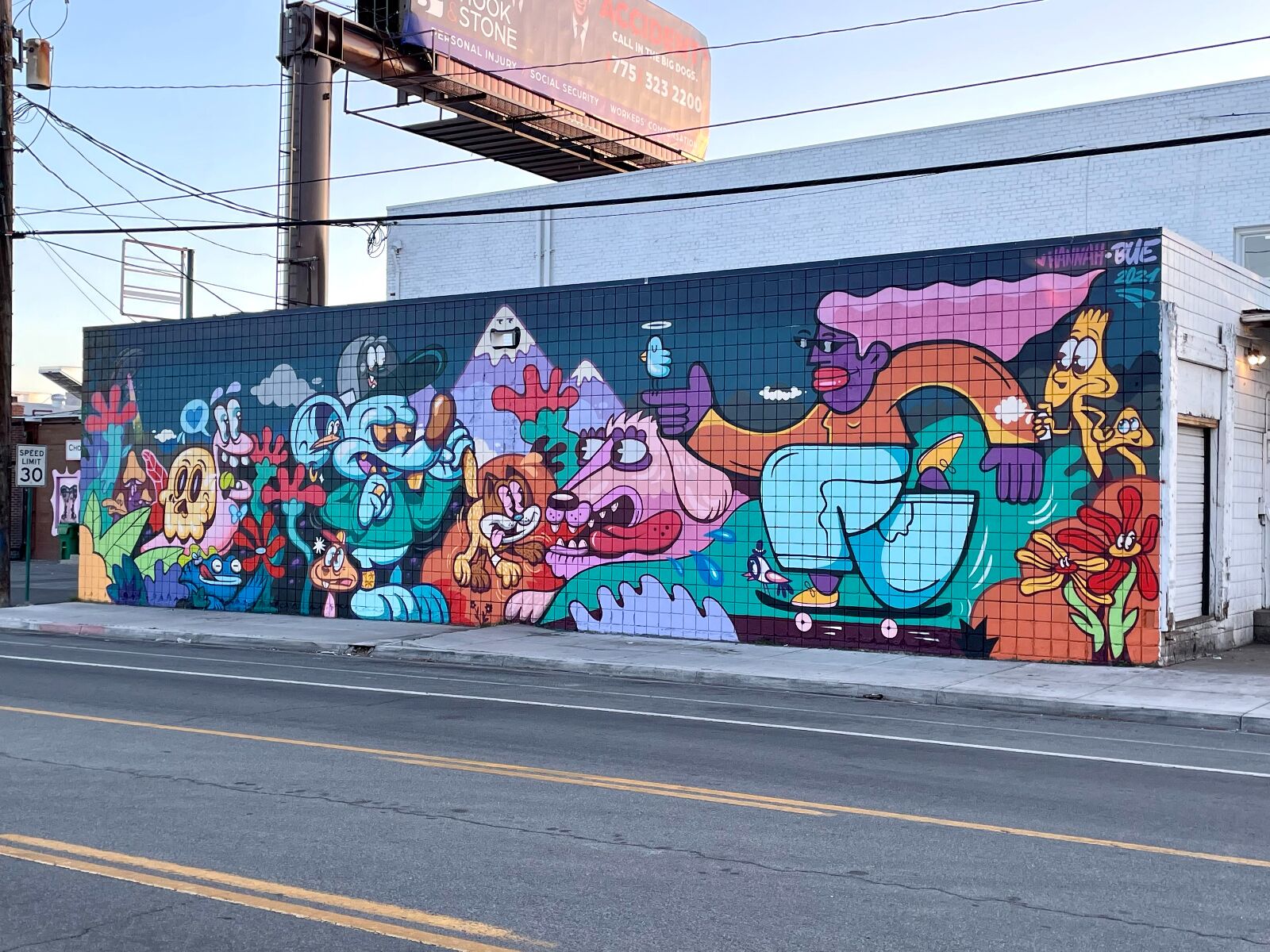 There are so many different styles of murals and street art in Reno. Hannah Eddy describes her work as “urban, contemporary, playful, illustrative, with positive messaging.” Anthony Ortega takes a whimsical “psychedelic” approach. Travel along to the Riverwalk District and find one of several murals completed by Joe C. Rock, entitled “Fruit of Labor,” capturing his mother’s arm representing her strength and commitment to diversity, something you’ll often find in his other work. 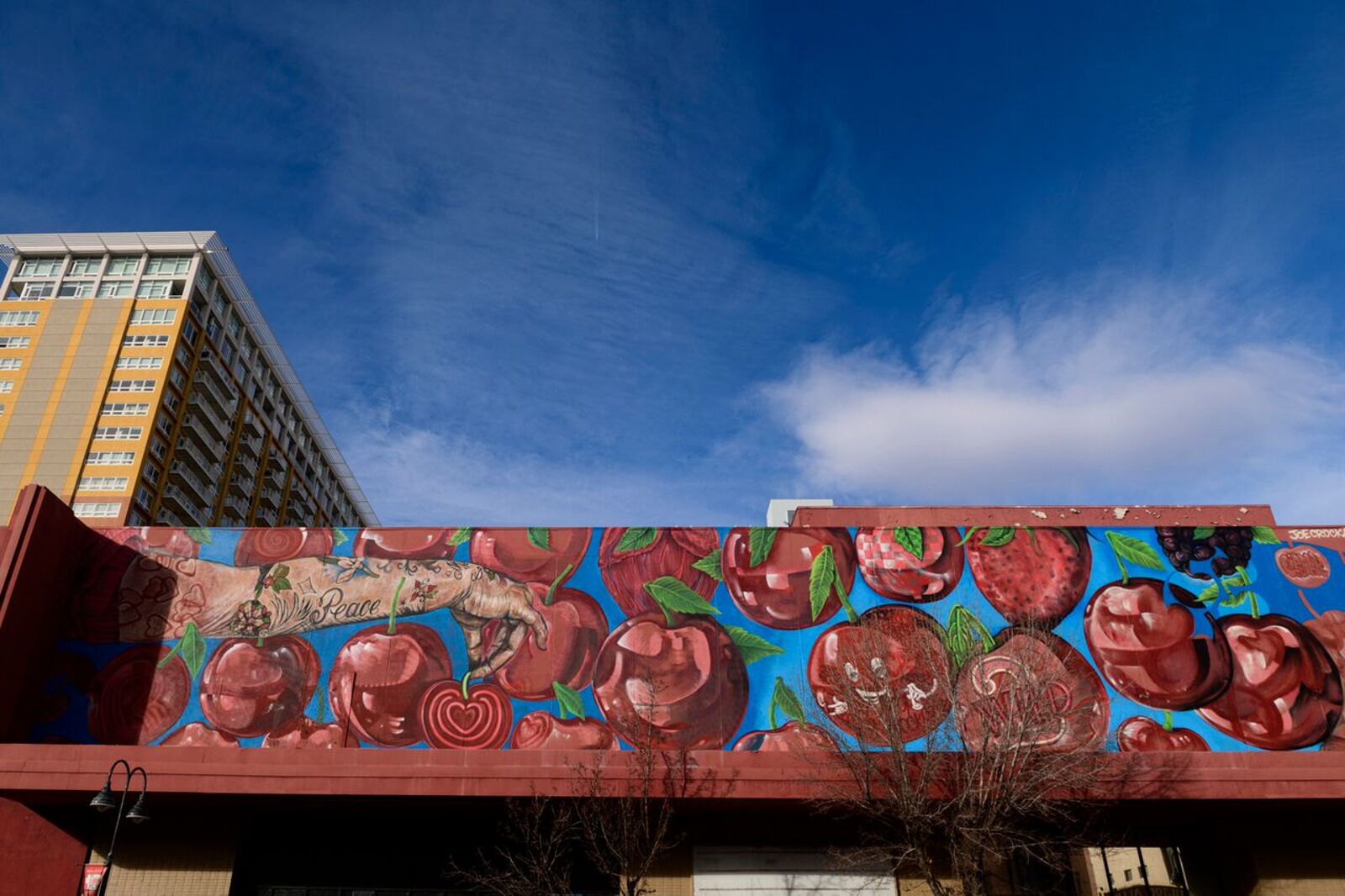 “What I want the public to take from my work is enjoyment first and foremost,” Rock says. “It’s supposed to be visually appealing and break up the monotony of another blank wall or advertisement. Secondly, the message – there usually is some kind of message or meaning to the work but I try not to force that on the viewer. I love to hear what people think of it because it changes from person to person and can mean many different things to different people.” 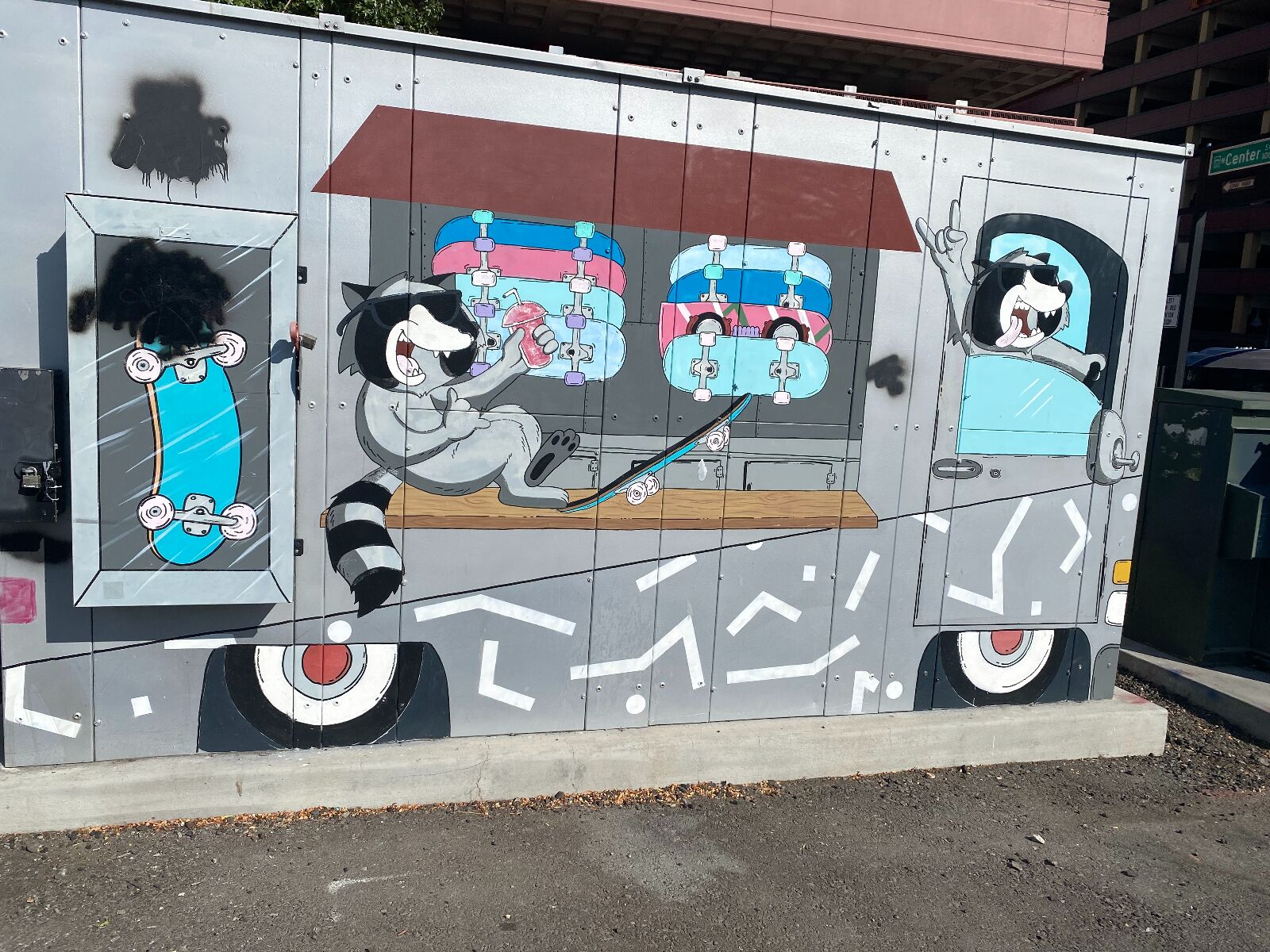 One of the things Miller said to my group during our tour is that sometimes she gets sad because a mural might be here today but gone the next. But I find that kind of exciting as a visitor. It means in Reno, there’s always something new to enjoy and appreciate. As the locals stay committed to bringing more art into the city, you never know what you’re going to see next.

TravelHow Reno Reinvented Itself Without Losing Its Edge
Tagged
Art + Architecture Reno, NV, United States
What did you think of this story?
Meh
Good
Awesome

9 Amazing Food and Drink Experiences To Have in Reno...all in One Place

10 Awesome Things You Can Do on a Trip To Reno...IF You Have the Right Home Base

11 Signs You've Been Away From Reno Too Long