You might think that a Nevada route called “The Death Drive” would give you something to worry about, like getting stranded alone in the desert. In fact, the road is not barren. Not at all. The itinerary for this 365-mile road trip — a loop from Las Vegas to western Nevada and back again — is actually alive with excitement.

You’ll head from the neon lights of Sin City toward the rugged beauty and history of the state’s wide open heartland. The route treks past forests and parks, among them the incomparable Death Valley National Park, and through old mining towns still holding their own in this century. We recommend stretching out your journey with stops and overnight stays along the way. To tackle “The Death Drive,” here’s the route and where to stop. 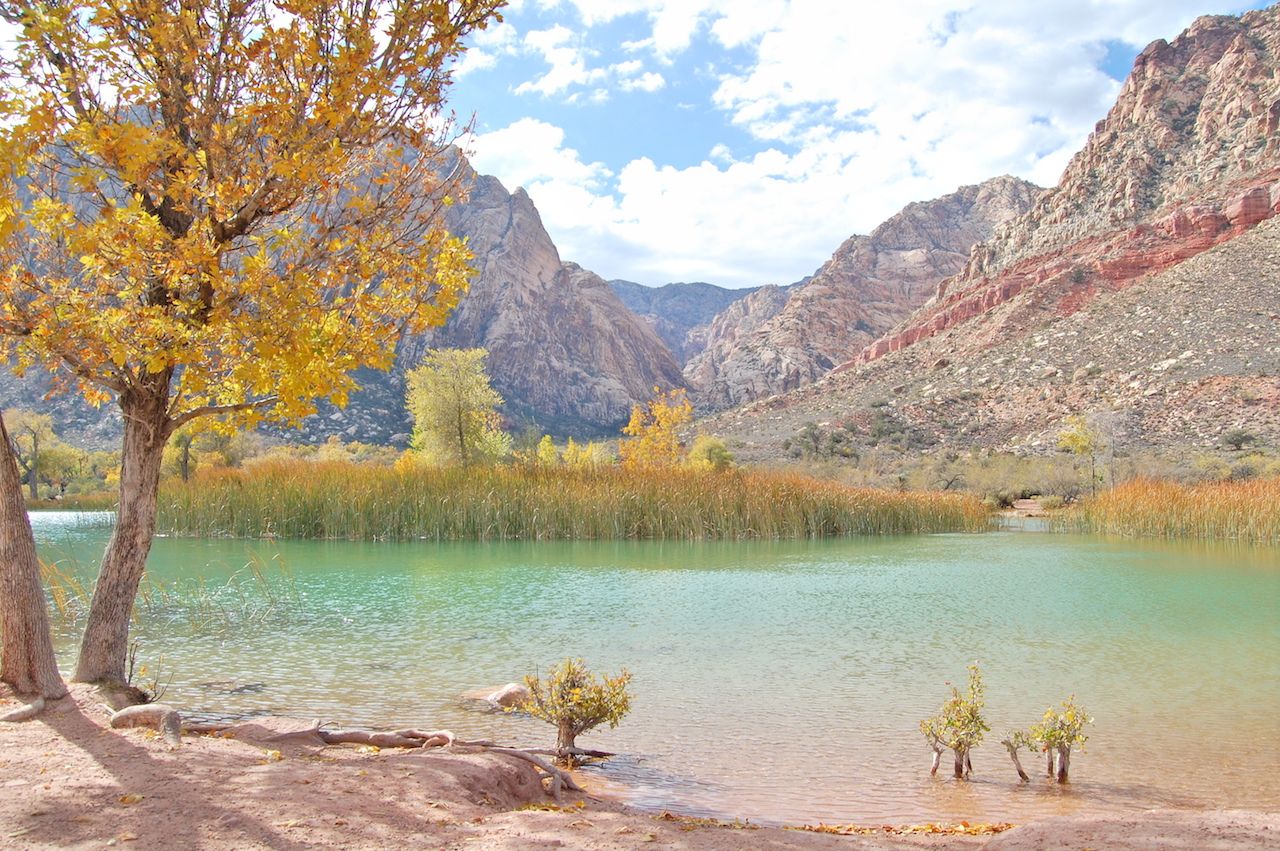 First, drive west for about half an hour from Las Vegas on NV-159 W. You’ll drive through Red Rock Canyon National Conservation Area, passing red clay rock formations and clay peaks on either side. The area has a 13-mile Scenic Drive through Red Rock Canyon with pull-over areas that showcase the gorge’s multifaceted aspects. The one-way drive takes about 30 to 40 minutes. The canyon also has various numbered hiking trails leading to desert flora or fossils like the Petroglyph Wall. Entrance fees vary ranging on the length of pass and type of pass or entry; cars and trucks for one day are at $15.

Next, turn off the highway into Spring Mountain Ranch State Park. The southern Paiute used this land as a water source, and later trappers and mountain men trekked through the area. The land was first turned into a working ranch by a Civil War veteran named James B. Wilson and his friend George Anderson, and it would later be purchased by some well-known people.

Radio star Chet Lauck owned the land at one point before selling it to Vera Krupp, a German film star and Baroness. The property became a state park in 1974, but pieces of the once-working ranch remain, among them a chicken coop, a blacksmith shop, and horse stables. You can tour the main ranch house turned visitor’s center. The park also has five various trails with one beginning near the center, and picnic areas, all available for a $10 entry fee.

Leave Spring Mountain Ranch State Park and continue onto Pahrump, a Southern Nevada town that’s an hour west of Vegas and an hour east of Death Valley. Pahrump is a hub for outdoor activities, most notably golf, hiking, and auto racing — but the wineries are what make it worth an overnight stay. With ample sunshine and a dry climate, Nevada’s growing conditions are prime for Zinfandels, Syrahs, and other red grapes. Pahrump has two operating wineries, and Pahrump Valley Winery is the first one you should visit.

Owned by Bill and Gretchen Loken, the facility grows Zinfandel and Syrah varieties on a three-acre plot of land share with their tasting room and their upscale restaurant, Symphony. For lodging, Pahrump has a number of RV resorts and hotels. At the Pahrump Nugget Hotel & Gambling Hall, pass by slot machines through its casino portion to arrive at the check-in counter and then go a separate and quiet area for your room. 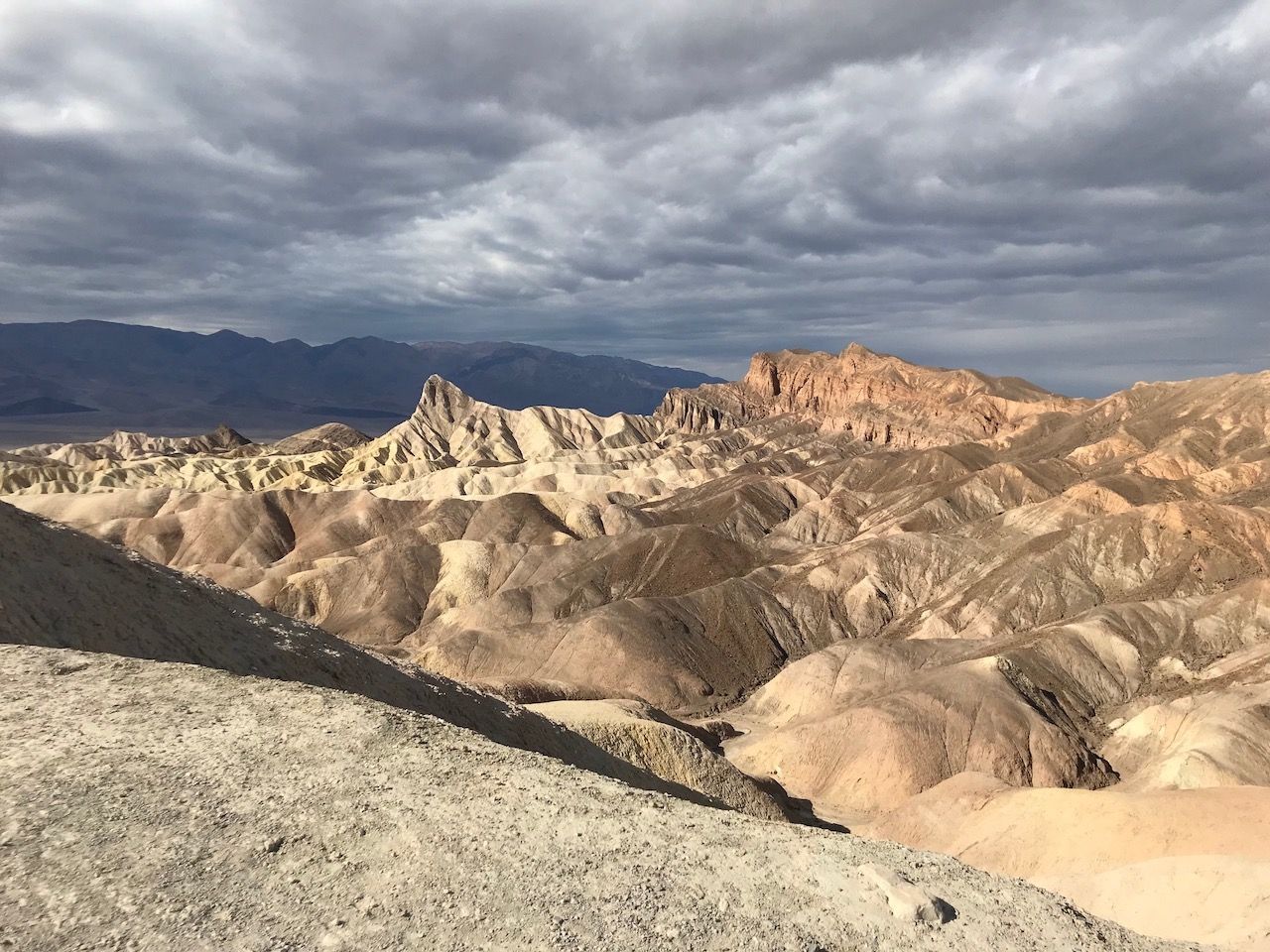 Driving just under an hour, continue west to Death Valley National Park. Sandwiched between Nevada and California, this is the largest national park outside of Alaska. There are endless sites to explore, many located along established roads so they’re relatively easy to find. The Furnace Creek Visitors Center is a good source for information, maps, and exhibits on the park’s geology and history.

One standout is Zabriskie Point where you can walk a short path uphill to a panoramic viewpoint overlooking the Furnace Creek Formation. Information signs detail the area’s geo-formation and the history of late-19th-century borax mining here. The scenic Artist’s Drive got its name from minerals in the volcanic ash resulting from repeated volcanic eruptions and crazy (read: hot) weather that has covered and altered this landscape. When conditions are just right, the intense colors of minerals — ranging from red hematite to green chlorite — appear and are visible from the Artist’s Palette Overlook. There, you can pull over your car and walk up and down small peaks, marveling at the scenery. (Another popular spot, a villa built in the 1920s for prospector Walter Scott known as Scotty’s Castle, is closed to the public for repairs and should reopen in 2020.) Entry fees for the park start at $15 for an individual entrance, valid for seven days.

Using the Furnace Creek Visitors Center as your exit point, drive for roughly 45 minutes via CA-190 W and NV-374 N to reach Rhyolite Ghost Town. Rhyolite is a historic gold mining town surrounded by the Mojave Desert with empty buildings standing as a reminder of its thriving past. You’ll drive up a single dirt road, passing by structures that bustled with people in the early 1900s — until a 1907 financial panic took its toll. It’s an eerie feeling to look at the buildings’ remains. One towering facade was once a bank building; another, called Tom Kelly’s Bottle House, describes what the house is literally made from. Rhyolite’s “residents” are still there — depicted as sculptures in the Goldwell Open Air Museum, an outdoor sculpture park with large-scale pieces by Belgian-Polish sculptor Albert Szukalski.

After visiting the ghost town, head to Beatty for the night. Beatty is another mining town established at the turn of last century as the central supply hub of the Bullfrog Mining District. Today, it’s better known as a gateway city into Death Valley National Park and offers up some colorful dining options. Options include no-frills diners with fun Western names and a grease-and-spoon joint feel — but with plateful orders. The interestingly named Happy Burro Chili & Beer looks like a western log cabin with indoor and outdoor seating and is noted for its Frito boats, chili, and open-face hamburgers. Be sure to bring cash. KC’s Outpost looks like a New England clam shack but serves up sandwiches, soups, and sides. Mel’s Diner is a throwback spot that’s great for breakfast and, if you’re lucky, you might even spot a herd of burros passing by.

Stage Coach Hotel & Casino is easy to spot with its bright, massive sign. There’s a small casino inside and, if you’re craving something familiar, there’s a Denny’s on site. If you need sugary or chocolate-covered goodies, Eddie World, adjacent to the hotel, claims to be Nevada’s largest candy store.

Day 3: Depart for Mount Charleston and (maybe a day) later back to Las Vegas 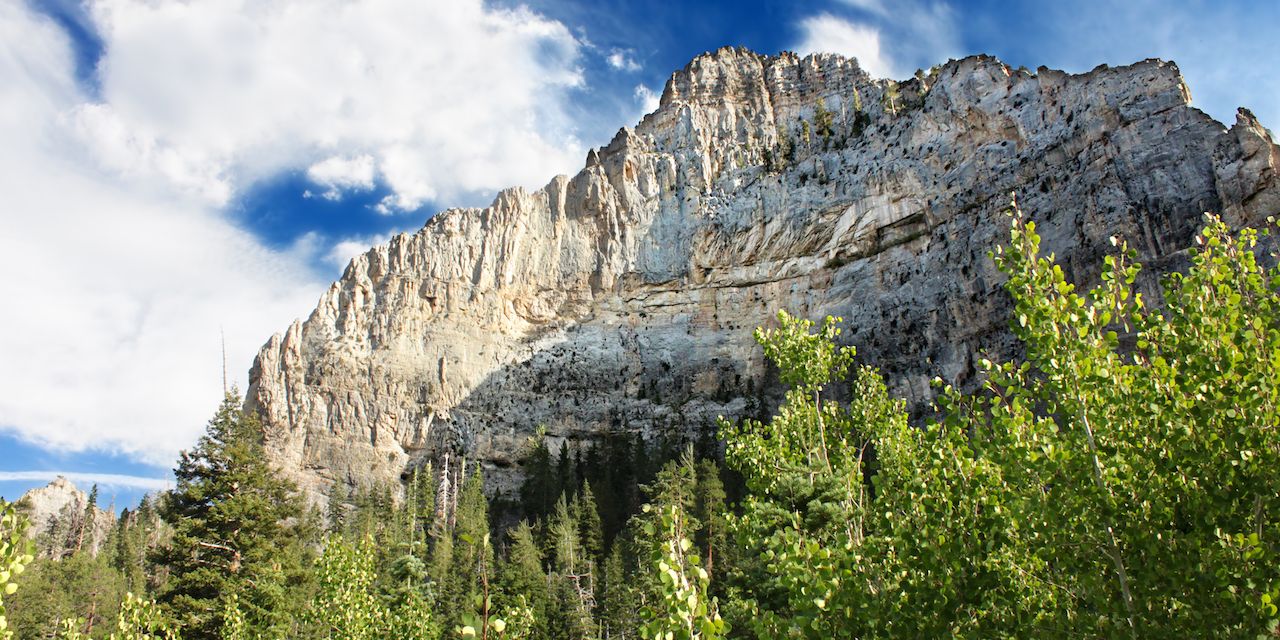 About an hour and 45 minutes from Beatty along US-95 S, turn off on N Rancho Drive to reach Spring Mountains National Recreation Area, a section of the vast Humboldt-Toiyabe National Forest that is also known locally as Mount Charleston. You’ll arrive at the Spring Mountains Visitor Gateway. This visitor’s center has information and exhibits on the area’s topography and history. Check out the cool wall depiction of the wildlife in the region; you’ll get two different perspectives when put on a special pair of glasses.

In the back of the building, the Silent Heroes of the Cold War National Memorial has a propeller from a plane that crashed on Charleston Peak in November 1955. There’s also the Seven Stones Plaza, built collectively by the seven Southern Paiute tribes, known as the Nuwuvi, who believe that Mount Charleston is their place of origin.

The Gateway is also the start of hiking trails at various skill levels, including an easy-to-moderate set of loops called The Rat Pack and The Acastus Trail. Hikers who can handle strenuous treks can get to Charleston Peak via the South Loop Trail and North Loop Canyon Trail, which can be done together as a loop. If you’re here in winter, Spring Mountains National Recreation Area also has a small ski resort called Lee Canyon. The rest of the year, you’ll find plenty of picnic and camping locations, with some areas having an accessibility fee, along with biking trails and multiple scenic byways.

If you need to spend the night, check out the Retreat on Charleston Peak. The resort evokes a lovely lodge feeling with the forest as its backdrop. Inside, its lobby area has a cozy fireplace, gaming bar, and café spot. The hotel’s Canyon Restaurant and Bar has brunch, dinner, and all-day bar menus, as well as a window area peering out towards the trees. It feels woodsy and far away — although from here it’s just a 20-minute drive back to Las Vegas.