The Danube River is mighty. As it flows eastern from Germany’s Black Forest mountains, the largest river in Central Europe touches on ten countries before branching out into the Danube Delta and emptying into the Black Sea. The Danube Delta, most of which lies in Romania with a small portion in Ukraine, is Europe’s largest wetland and a UNESCO recognized bioreserve teeming with birdlife.

On its entrance into Romania, the Danube passes through the Danube Gorges that squeeze the massive river. In earlier times, ships were lost here as the water boiled with dangerous currents reaching depth of 300 feet — until a series of dams were built to harness the river’s incredible power and control its treacherous flow.

About 500 miles downstream, the Danube Delta is a different story. The Danube flows into the Black Sea via the Chilia, Sulina, and St. George branches and creates one of the youngest
territories of Europe. The mix of new sediments, older banks, and guano make this land — simply called “the Delta” by the locals — unique.

While I’ve paddled the Danube at its entry into Romania, as well as where it flows halfway across the country, in Oltenia, I know the Danube Delta best — as I’ve enjoyed paddling the Danube Delta annually for years. It never gets boring and it retains so many mysteries. Even those areas that are very familiar constantly change under different water levels, changing temperatures, and times of year that bring varying migratory birds — adding to the total of over 300 bird species found there. 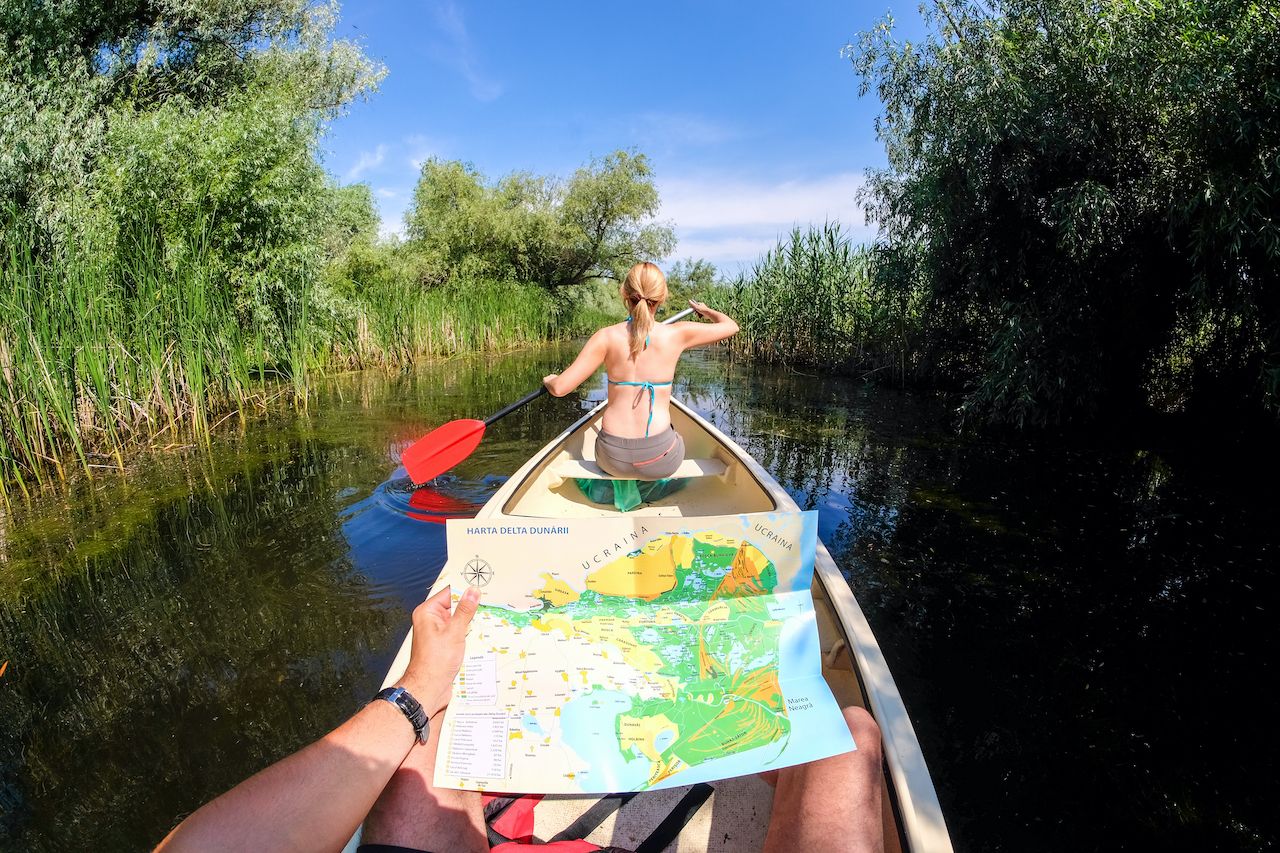 The best way to experience the wildlife here is by canoe or on a kayak. The St. George Branch splits off from the Danube first, and the Sulina Branch splits off from that. Further eastward lies the Chilia Branch, which feels wilder than the other branches. On the north side of the Chilia Branch lies Ukraine, but the highlights below are all based on the Romanian side. In between these tributaries, lie numerous lakes and marshes that provide a habitat not just for the many birds but over 25 species of fish. 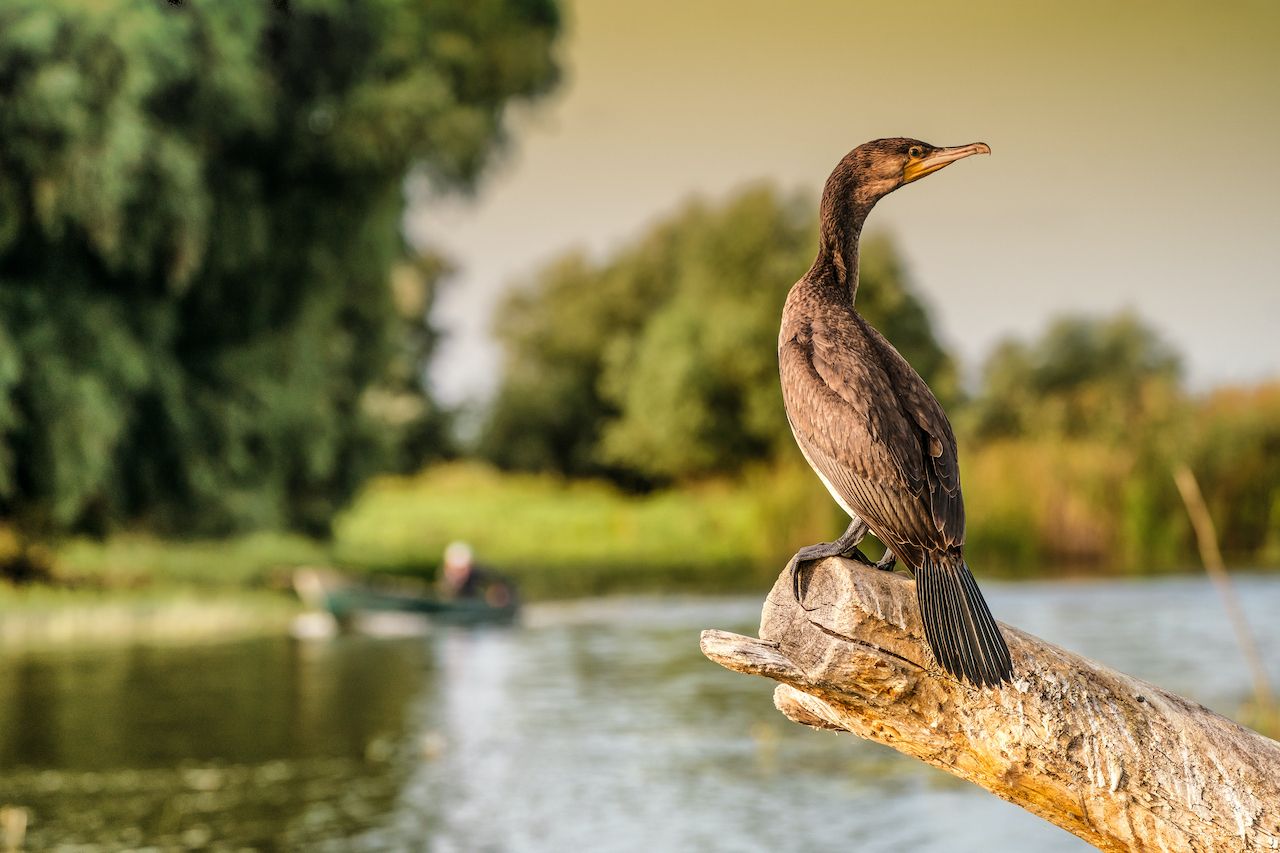 Off of Route 1, between the towns of Plauru and Pardina, you’ll find the Mila 35 canal, one of the longest canals in the Danube Delta. You can launch from there under the bridge and head south on the canal — or, alternatively, you could also paddle to this point along the Danube’s Chilia Branch.

As you paddle down the Mila 35 canal, make the second right turn onto the Sireaşa brook and a lush universe will open. Continue to paddle until you reach a stilt house to your right. It is now time to make a left turn and discover one of the most beautiful lakes in Romania: Lacul cu Coteţe, which means Coop Lake.

Its name already suggests the variety of birds found here; it has lately been a favourite of pelicans and swans. From there, a canal connects it to one of the Delta’s best-kept secrets, a congregation of cormorants and spoonbills. You can return to your launching spot by paddling to the side of the stilt house and turning right. It will connect you back to Mila 35.

Turtles on the Stipoc Canal 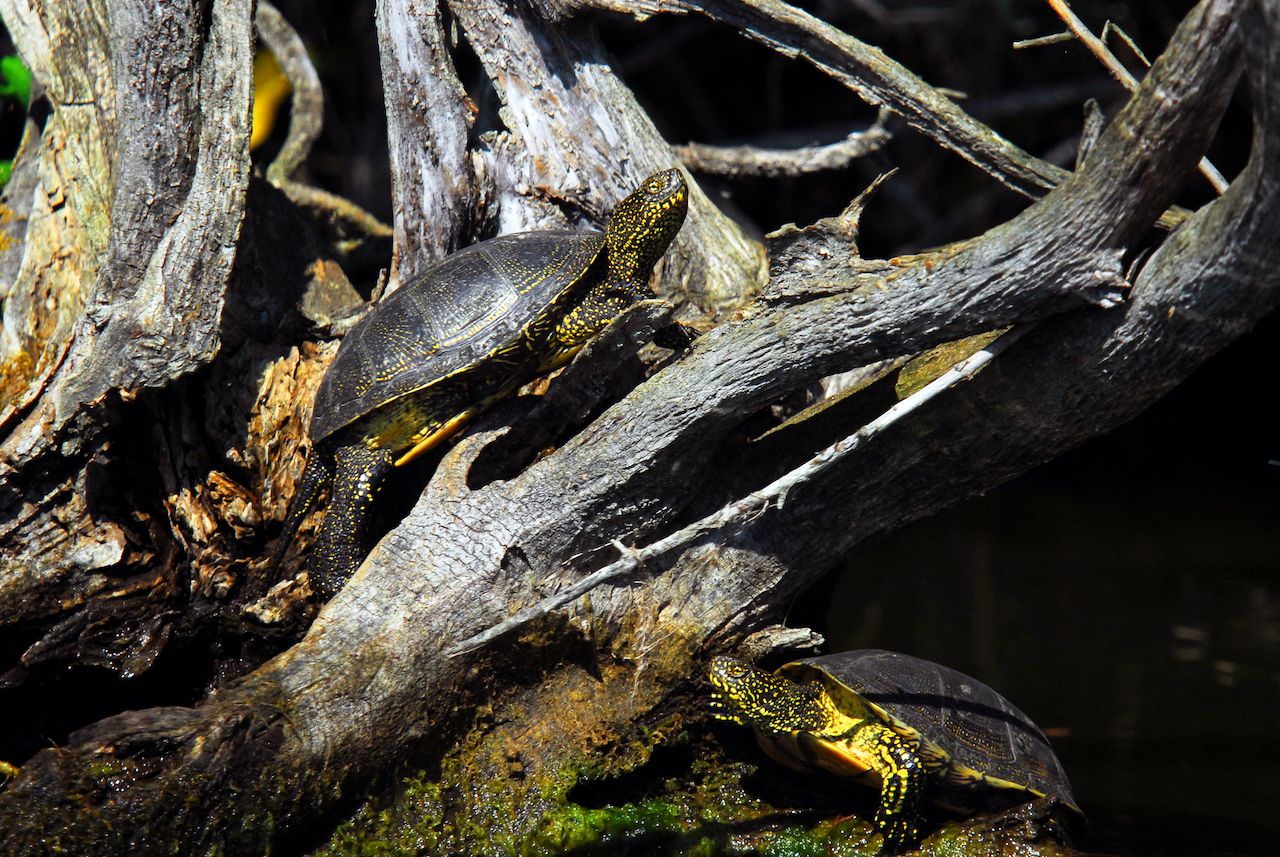 Just before reaching Pardina, when heading east from Plauru (either paddling or driving on Route 1), you’ll see the Stipoc Canal, where you can see turtles swimming and where you can have a dip, too. As you paddle down the Stipoc Canal, you can enter the adjacent lakes, depending on the water level. If you’ve brought a hammock along, you’ll likely find an embankment at which to tie it between two willow trees. Relaxation can be magical here, with mornings punctuated by the sounds of the surrounding wilderness.

Doing it sustainably all the way 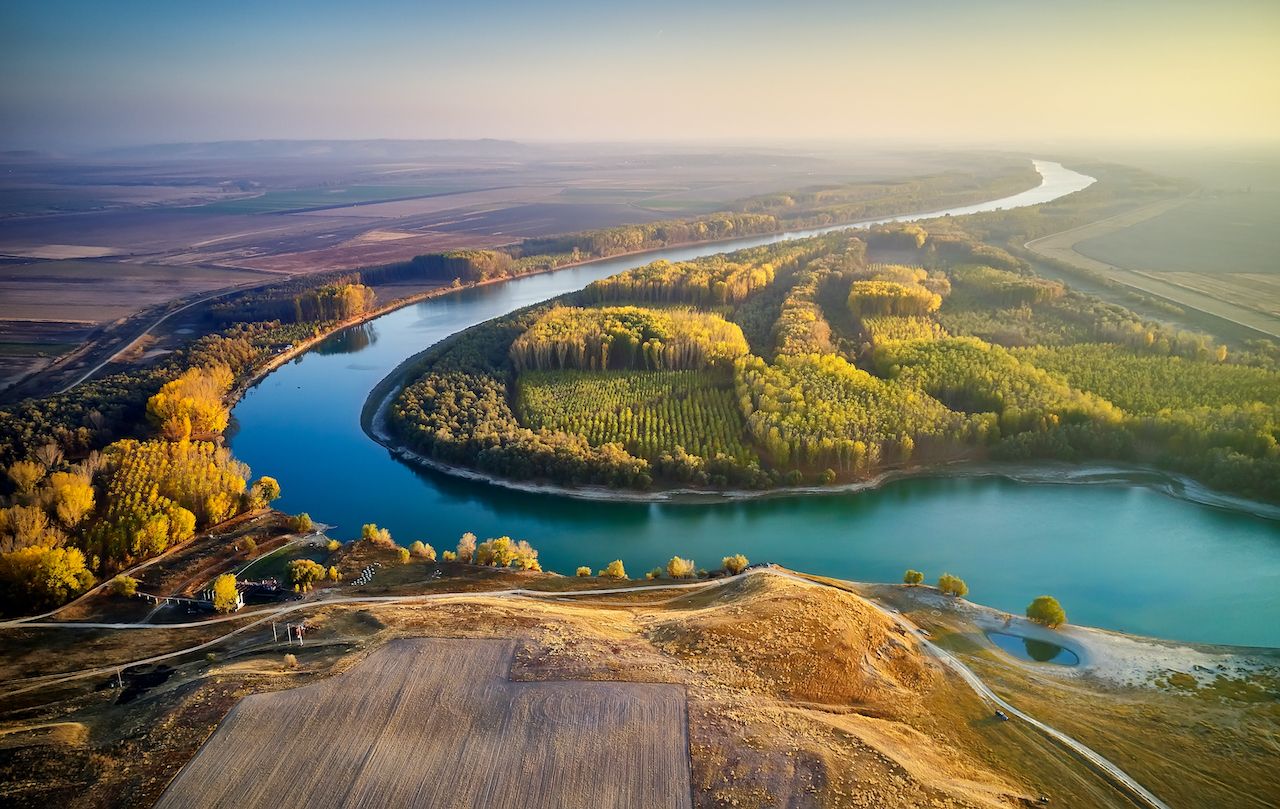 The above options allow you to drive to certain entry points for a day of paddling, while staying at accommodations overnight. You also have the option of a full kayaking expedition via Chilia Branch — by paddling downstream to Periprava over several days, stopping to enjoy the beautiful sights and sounds along the 65 miles. Be sure to check out the pelican lake just outside of Periprava, and, in the town itself, admire the sandy roads that connect the village. From Periprava, you can go full circle by taking the boat back to the town of Tulcea, near the start of the Chilia Branch. 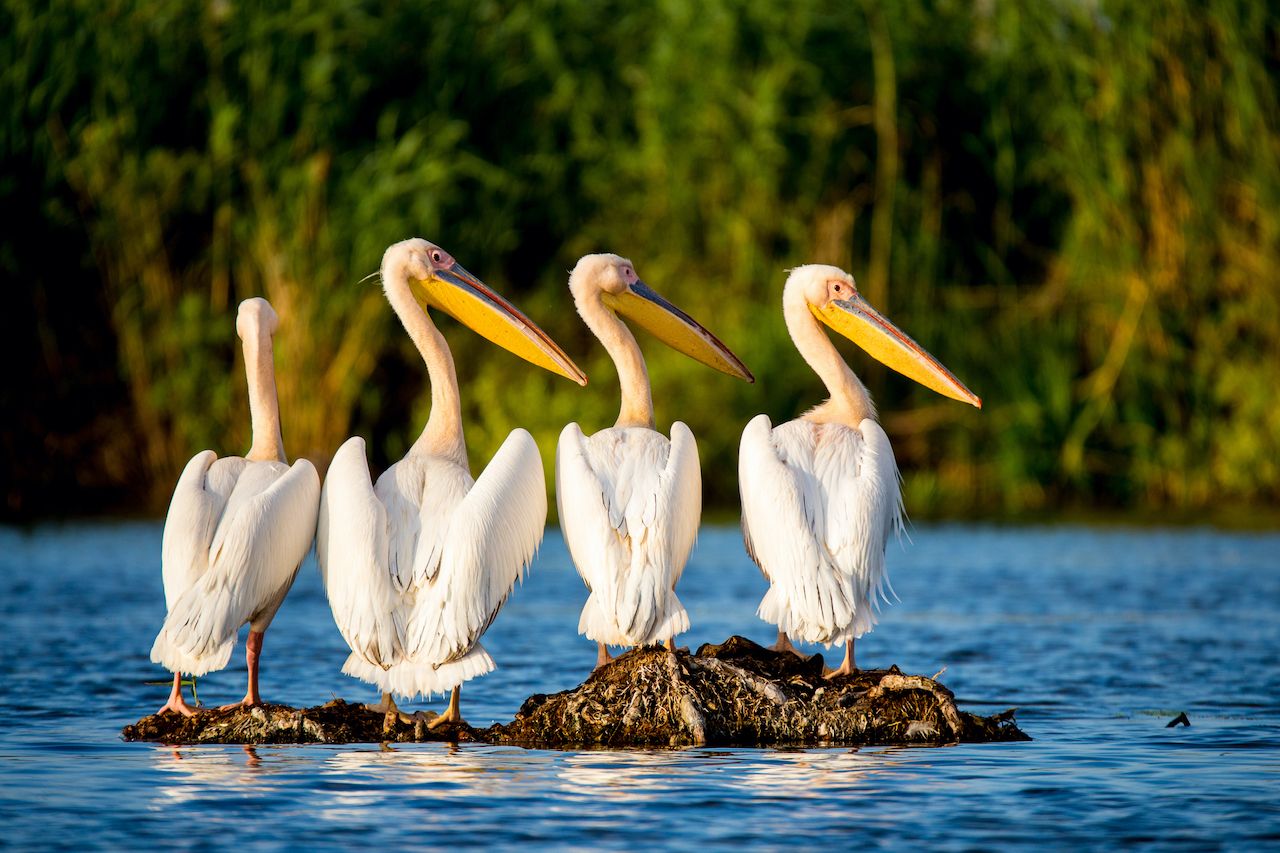 Due west of Tulcea lies the “Upper Delta,” near the towns of Şomova and Parcheş — before the Danube River forks into its branches. This area is less well known among paddlers, which may explain why so many animals gather here. A family of pelicans returns here annually; you can almost see it on the first lake to your right as you enter the main canal at Parcheş. While it’s not accessible when the water is low, this is one of my favorite places in the world and my favorite in the Delta. There is also a beautiful oak forest nearby.

While paddlers are rare in this part of the reserve, interactions with fishermen are common and the magic of water life can be found around every turn — like swans, cormorants, great egrets, herons, terns, kingfishers, otters, etc. Even European beavers have been spotted again after an absence of almost two centuries.

There are several lakes and smaller canals to explore along the main one while paddling toward the Danube. About two-thirds of the way there lies a canal to your right, accessible during the higher waters of spring and connecting with beautiful Morun Lake. When water levels permit you to keep paddling from there to the mighty Danube itself, the sight is breathtaking. 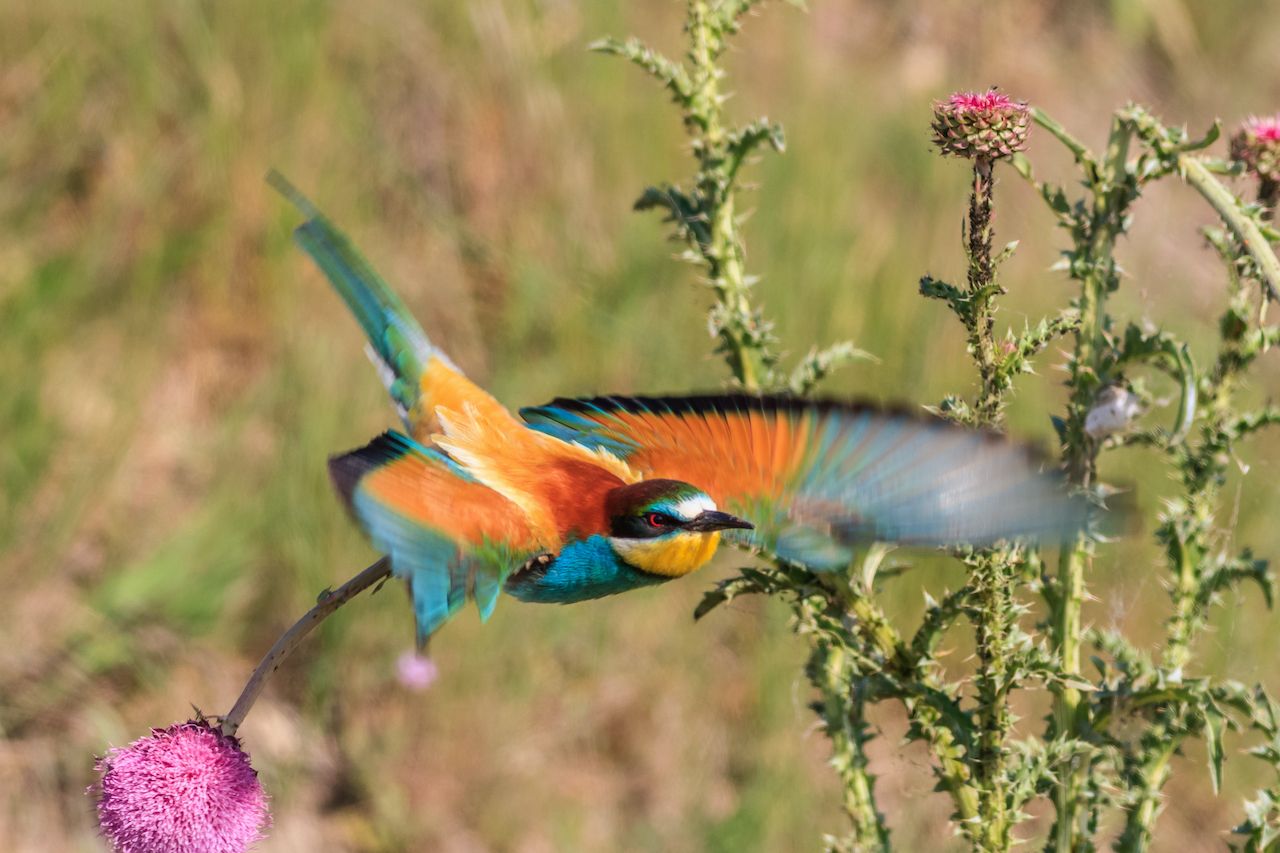 Further along the Chilia Branch lies the town of Chilia Veche, which is a good option for families. There are several accommodations, facilities, and stores for that extra bit of comfort for families traveling with children. Kids will not get bored here, paddling routes will be easier for them, and opportunities to spot wildlife are still plentiful. Even the road to Chilia Veche will make it easy for an entire family to see bird species like the colourful bee-eaters and perhaps even the elusive jackals, whose numbers have been making a comeback.

How to plan for a trip 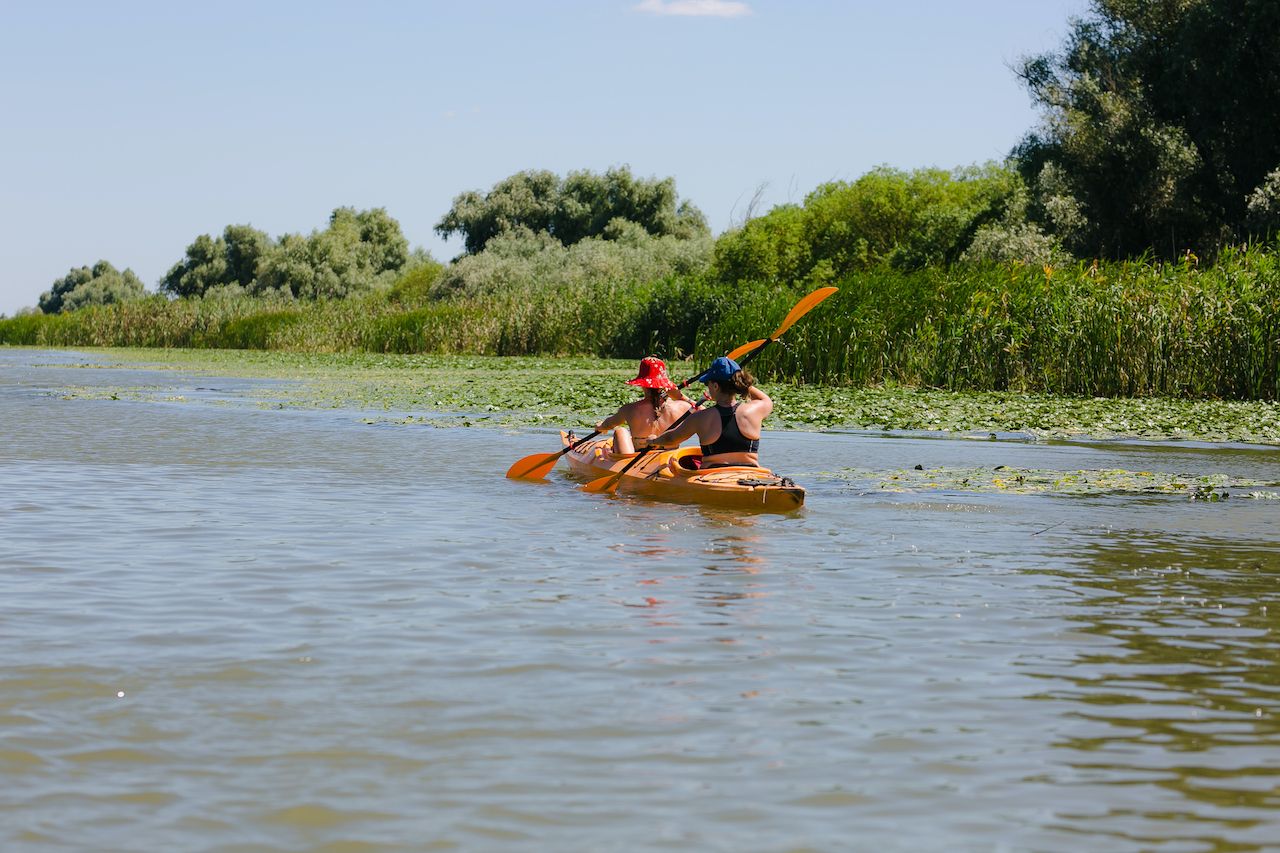 When to go — Most travelers visit from the beginning of April to the end of October, although a winter expedition would also be highly interesting. If autumn is mild and long, birdwatching is possible until the beginning of November. The water level is highest in spring months, when there’s runoff from melting snow far upriver. This gives you the most opportunity to explore various tributaries and lakes in the Delta — but the bigger canals are still navigable in summer.

Getting there — The towns of Brăila or Galaţi are a three-hour-drive from Romania’s capital, Bucharest. From there, a ferry can take you to the Upper Delta. To reach the road along Chilia Branch, you will need to take the Tulcea-Tudor Vladimirescu ferry. Tulcea, a 3.5-hour drive from Bucharest, is also the best place to rent kayaks and gear.

Permits — You will need permits for visiting, fishing (if it’s allowed during the time of your trip), and vehicles. They can all be purchased and paid online and then shown, together with an ID, to the rangers patrolling the waters or to the border police officers. The website of the Danube Delta Biosphere Reserve Authority, where you can purchase your permits and make reservations, is in Romanian — but you can use your browser to translate it. You can also email directly with questions about permits.

What to bring — Apart from your kayaking gear, insect repellent is a must. Mosquitoes are there from April to October and they become unbearable for one hour after sunrise and one hour before sunset. Remember that the data coverage may be weak or nonexistent, so cash payments are the norm. There are restaurants and bed-and-breakfast-style hotels, but they might be fully booked during summer, so come prepared.

Bring plenty of water and food. You should not forget water shoes, a hat, your bathing suit, and sunscreen. The temperature usually drops during the night, so hoodies and long trousers will keep you warm in spring and autumn.

If camping, 10-degree sleeping bags are needed for the colder seasons, along with cooking utensils. A mobile shower could be a nice touch; of course, you should also bring environmentally friendly shower gels.

PaddlingIn Greenland, Kayak Between Icebergs To Reach an Ancient, Rumbling Glacier
Tagged
Paddling Wildlife Romania
What did you think of this story?
Meh
Good
Awesome

This European Country Has 6,000 Grizzly Bears. Here’s Where To See Them Up Close