The streets of Barcelona come to life after the sun has set. Spain’s second-largest city is, somehow, even more vibrant at night than it is during the day, a nod to the fact that the Spanish start their evenings later than most. Whether you’re planning on heading to the clubs until the wee hours of the morning or want to hit the hay at a reasonable hour, few places are better to start a night out than a rooftop bar. These eight rooftop bars will give you a taste of Barcelona’s legendary nightlife.

1. The Lounge at Hotel Arts 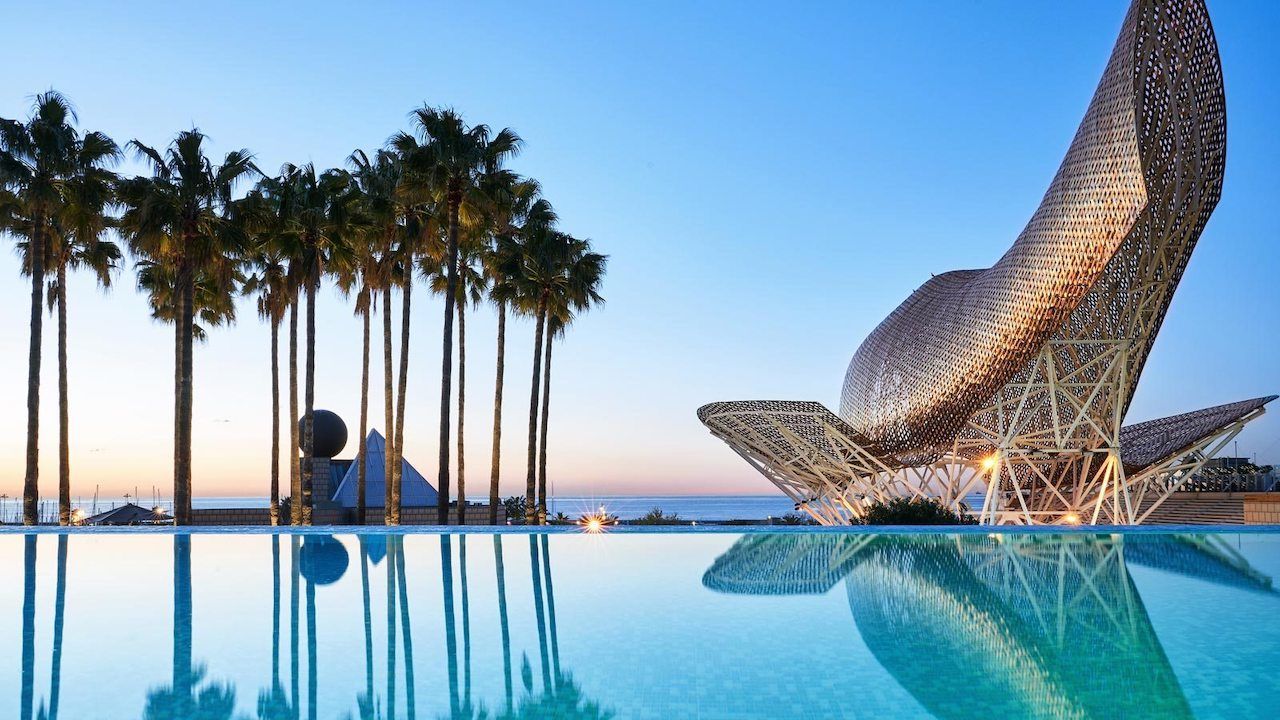 Hotel Arts is consistently ranked as one of the best hotels in Spain, so it’s only fitting that it has one of the best rooftops in the country, too. This open terrace has an extravagant infinity pool with views of both the city and the sea, and live music plays during sunset. The Lounge is open from 8:30 PM to 11:00 PM, April through September. As the night goes on and you grow hungrier, you can dine on delicious tapas and signature cocktails at the hotel’s Michelin-starred restaurant, Arola. 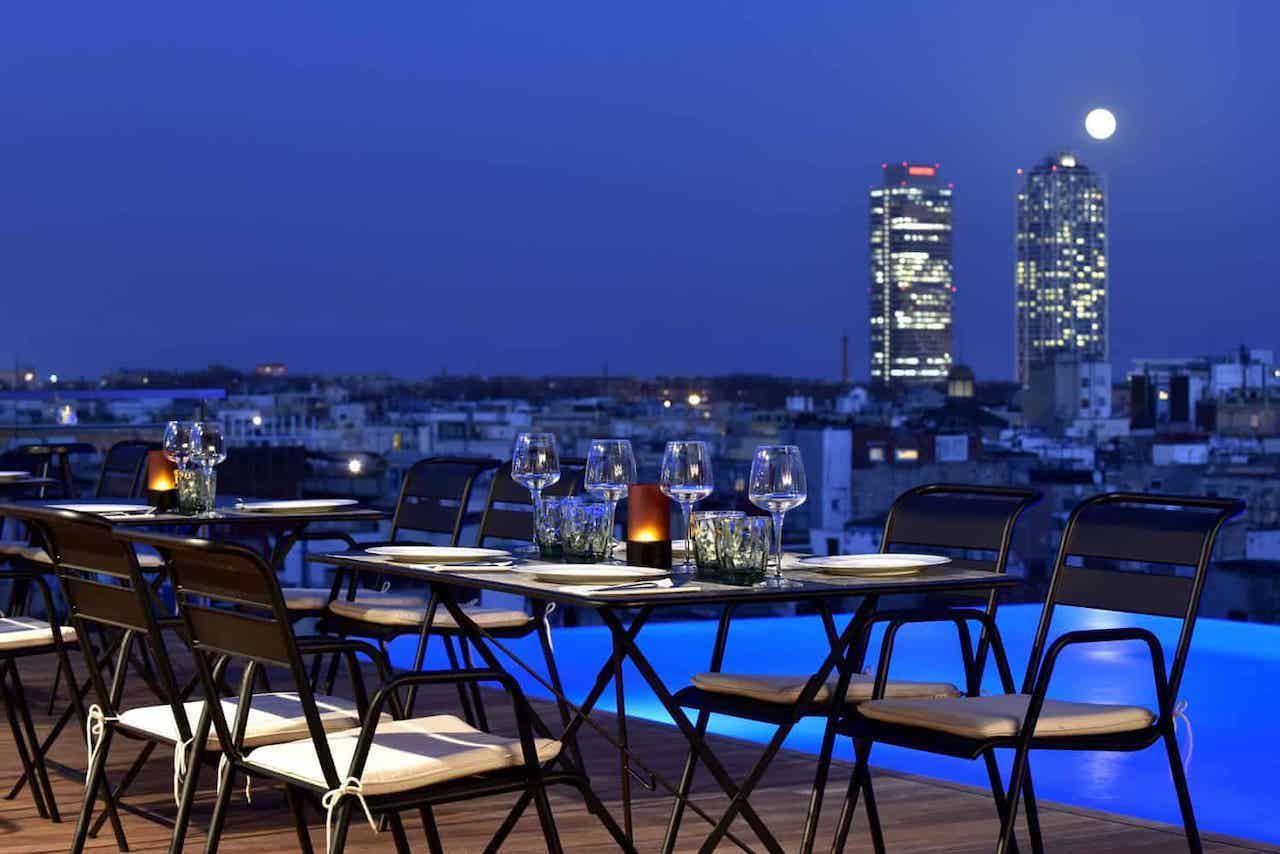 Grand Hotel Central’s Sky Bar is an establishment in the heart of the city. Its steep 20 euro cover charge (about $22.50) includes a drink, while full-price cocktails will set you back at least 14 euros (around $15.65). There’s regular live music on the weekends, and the place is within walking distance of both the Gothic Quarter and La Ribera. It’s also one of the only places on the Iberian Peninsula where you can dine on fondue outside as the sun sets while drinking an Aperol Spritz. The rooftop is a lively way to spice up a night and, although it’s not cheap, that cover charge keeps you in the door until the bar’s 1:00 AM close. Note, however, that Sky Bar does tend to fill up. If you’re visiting during peak season over the summer, reservations are recommended. 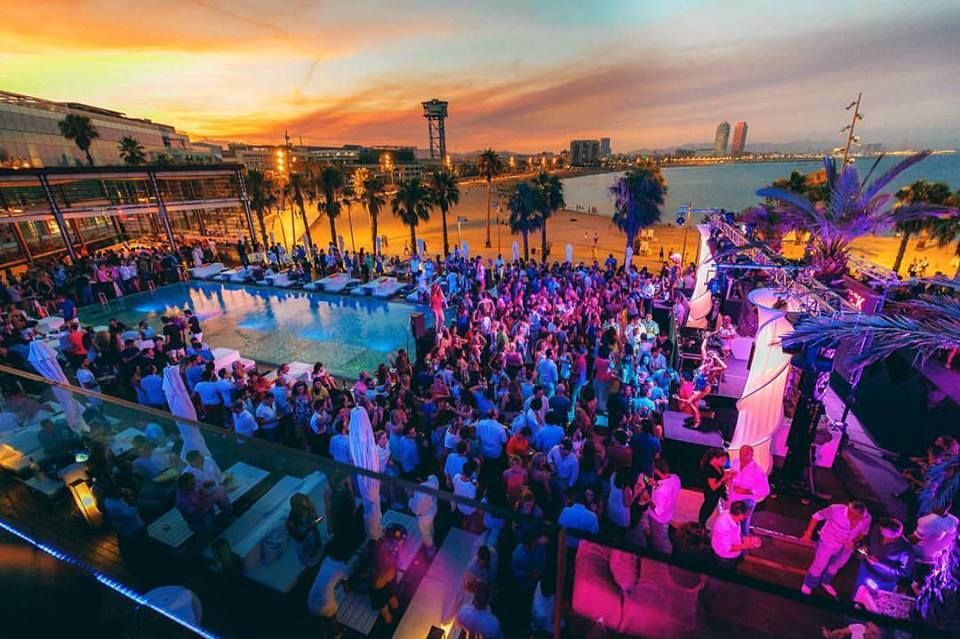 Eclipse Bar’s glass-encased views of the city make it one up-high bar you shouldn’t miss. For drinks, there are fruit-filled cocktails like the namesake Eclipse (vodka, sake, and watermelon) and bottles of cava, Spain’s sparkling wine. Eclipse doesn’t opt for traditional Spanish cuisine for food, offering instead a dim sum menu that’s a favorite among locals and tourists alike. 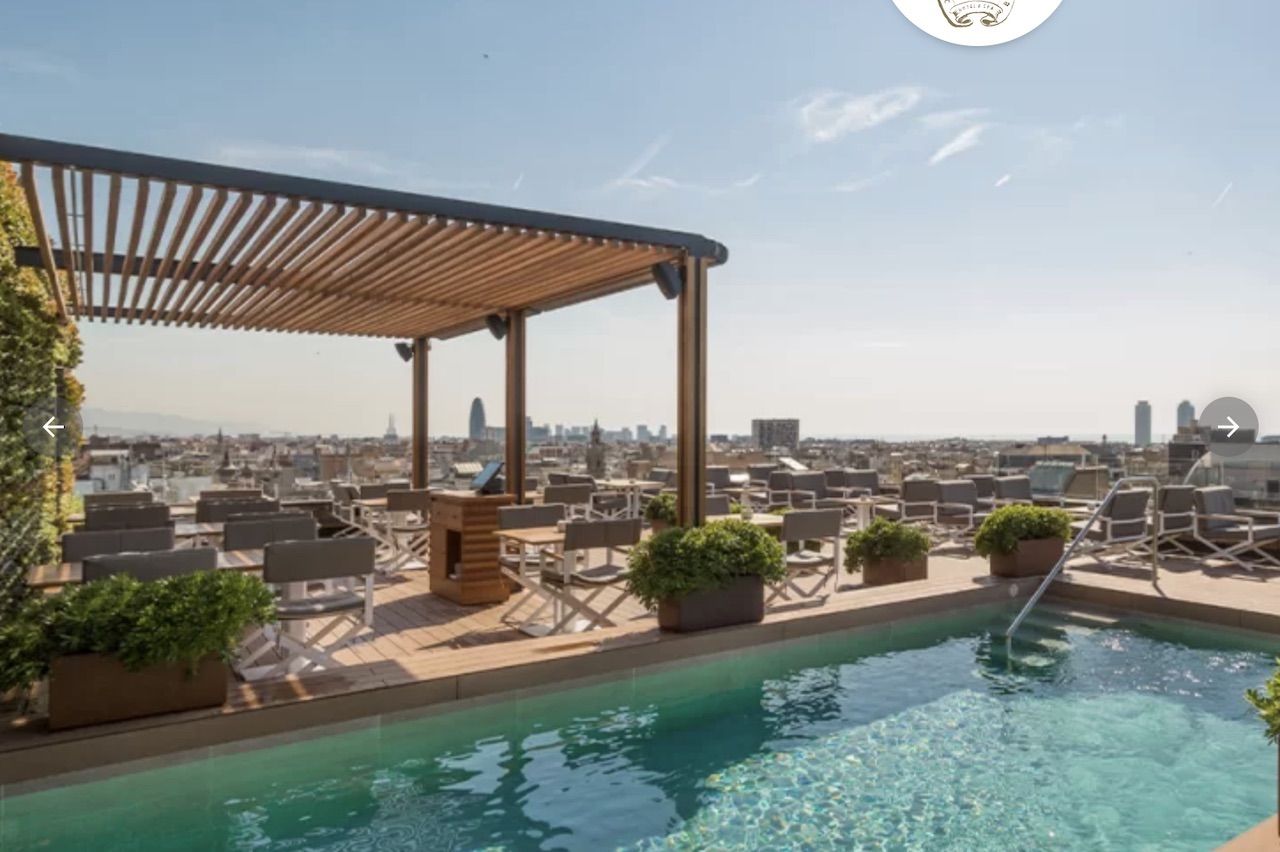 There is no landmark quite as quintessentially “Barcelona” as La Sagrada Familia, and views of the UNESCO World Heritage site are even better from above. Enter La Dolce Vitae, a rooftop bar with unbeatable views of the basilica. Drinks start at 18 euros (about $20), so expect an evening at La Dolce to be expensive, yet quality. A resident DJ sets the mood on weekend evenings, and in the grand tradition of modern rooftop bars, there’s a pool available. 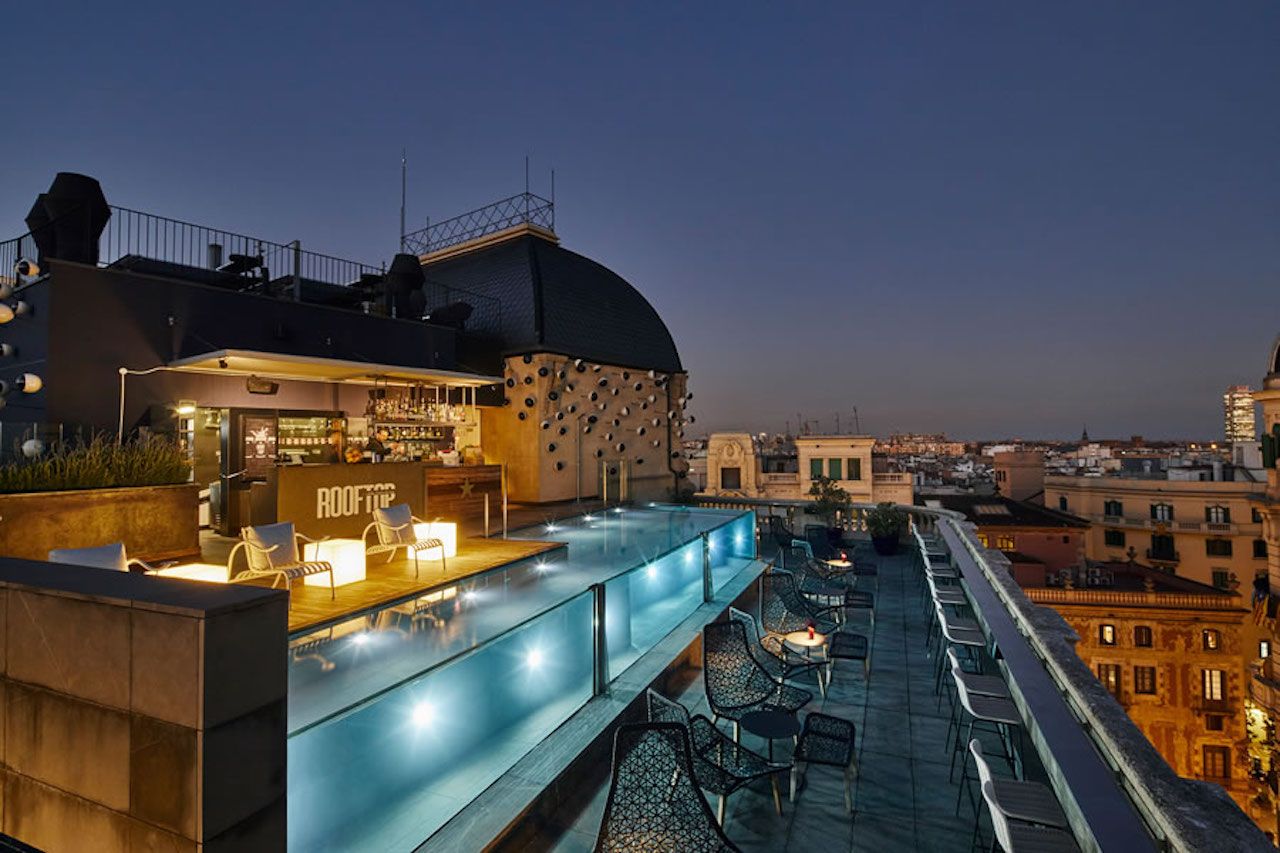 Ohla offers everything you need in a Spanish rooftop bar experience: tapas, cocktails, and a swimming pool. Its location is reason enough for a visit, even more so than the delicious tapas, the five-star hotel setting, or the decadent (albeit expensive) cocktails that Ohla offers. Ohla is in the heart of Barcelona, as central as any rooftop bar could be. It attracts a trendy crowd of tourists and locals, of which you can tell the difference immediately — the locals congregate around the bar and cocktail tables, and the tourists generally can’t seem to pull their eyes away from the nearby Barcelona Cathedral. 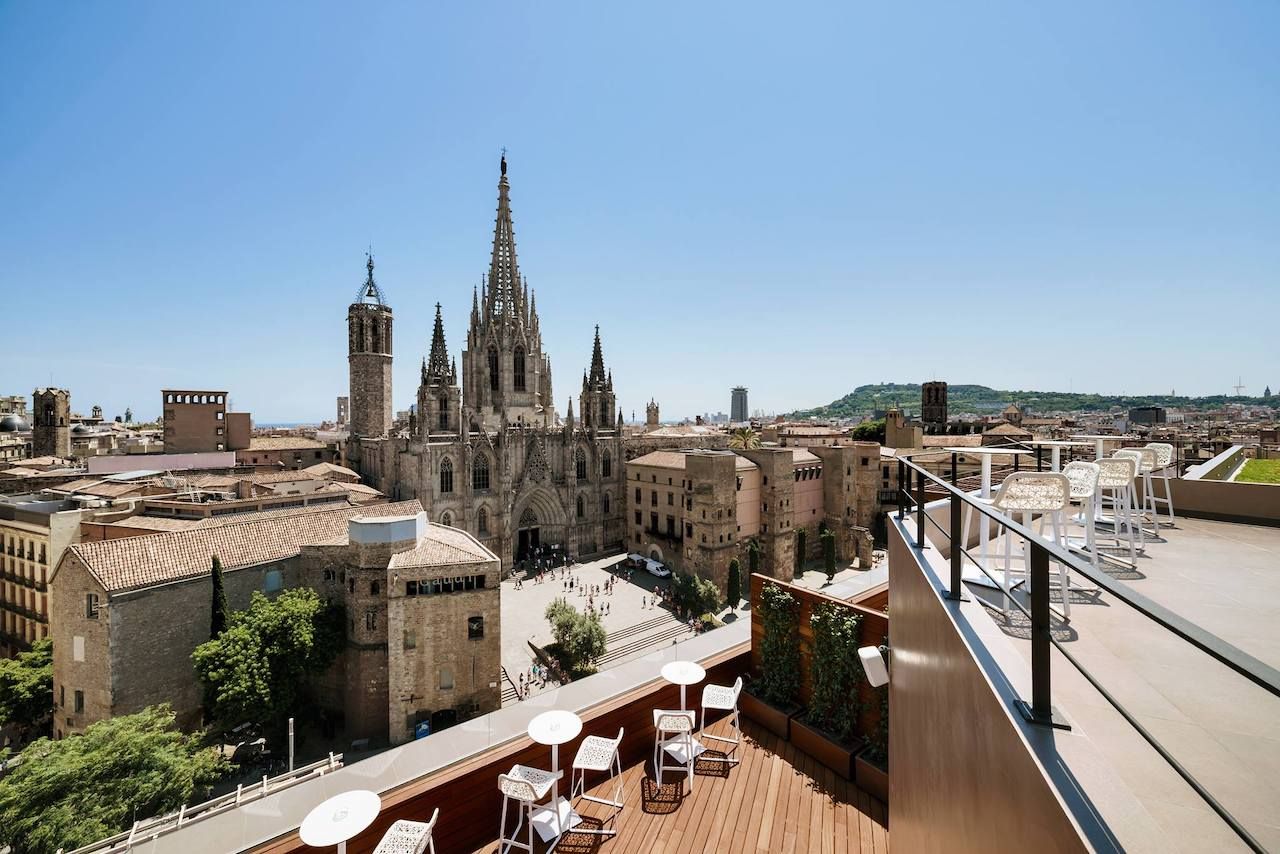 Those looking for a rooftop bar that feels luxe without a strict dress code need to look no further than the Panoramic Terrace on top of Hotel Colón. Panoramic is comprised of wooden decks spread across two levels. What sets a night spent at Panoramic apart from the many other rooftop bars in Barcelona isn’t the tapas or drinks, it’s the view of the Barcelona Cathedral just across the road and the greater Gothic Quarter beyond. Walking out onto the terrace is akin to stepping onto the set of Nosferatu. If you’re there on the right night, you’ll be treated to live music by local artists. 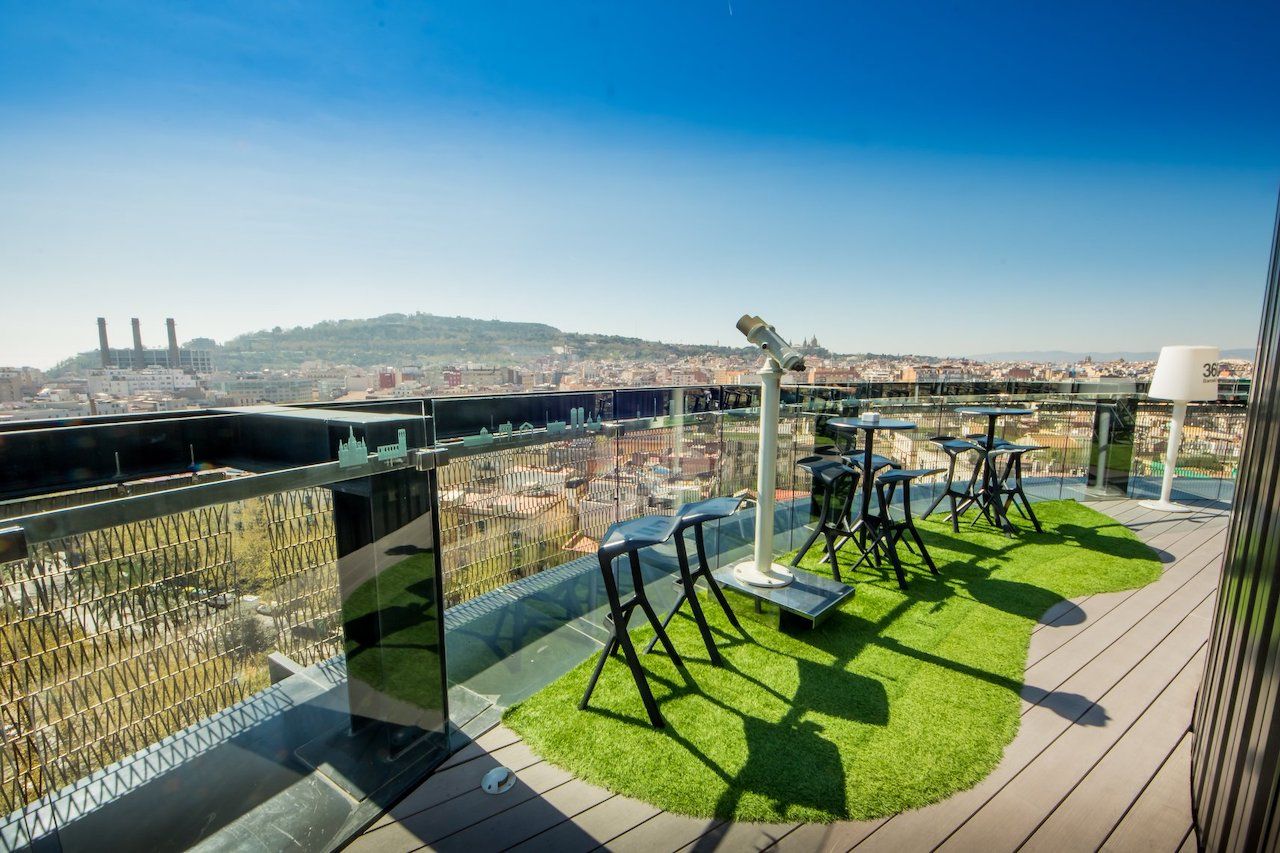 The Barceló Raval Hotel is iconic. This is due, in part, to its oval shape. The building’s rooftop, aptly named 360°, has unadulterated views of Barcelona, including La Rambla and the beach. Its perimeter is lined with barstools, funky lighting, and artificial turf. There are sunbeds for lounging at dusk and a full-service bar. From Thursday to Saturday, live DJs amp up the atmosphere, taking it from laid-back to lit up — definitely something you don’t want to miss if you’re looking to get your groove on outdoors. 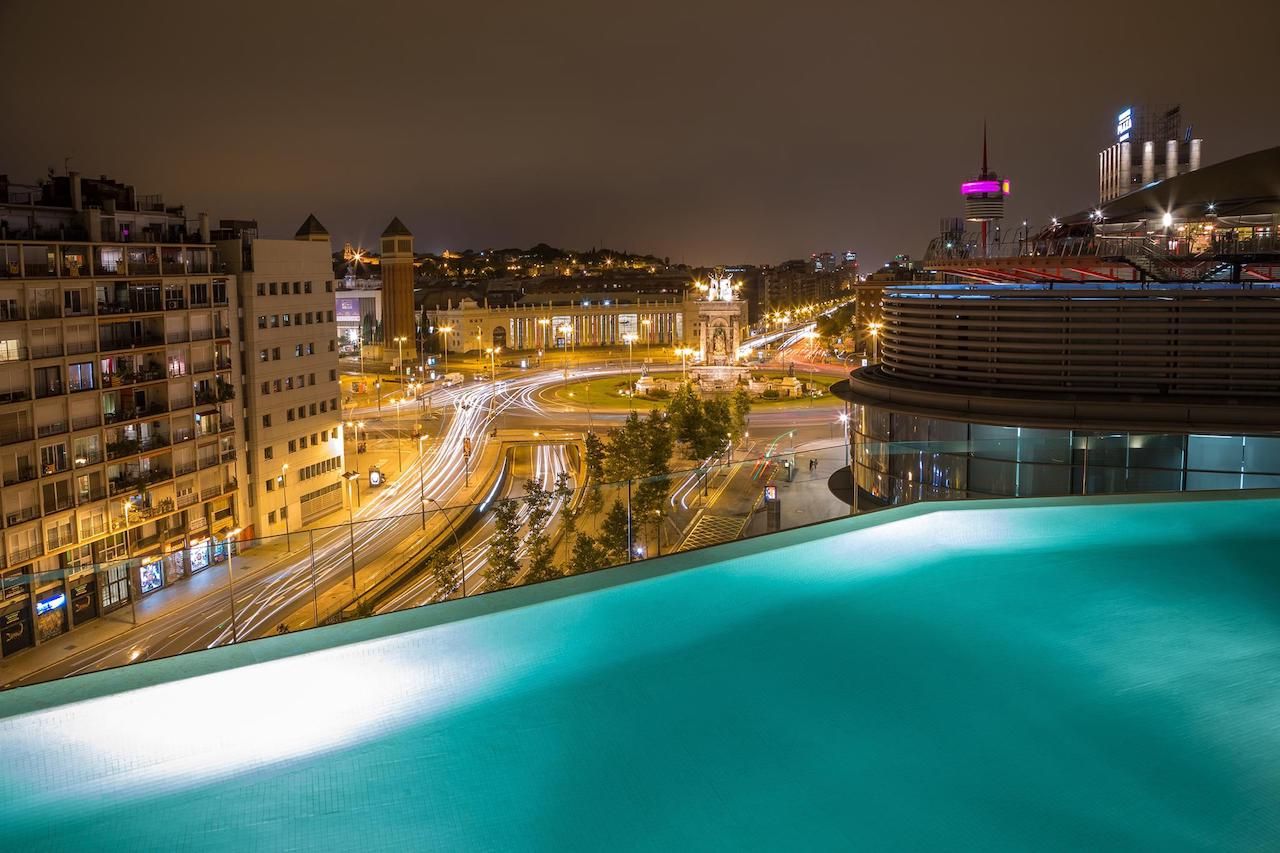 B-Hotel’s rooftop B-Bar mirrors the hotel’s sleek interior design. It has all the appeal of a luxury rooftop escape, and, unlike most of the spots on this list, it offers the experience at an affordable price. There’s no spendy cover charge, making B-Bar ideal for budget travelers who want to revel in Barcelona’s rooftop nightlife. B-Bar is best enjoyed late in the evening when the lights of Plaza de España, in clear view of the rooftop, are switched on.

Food + DrinkEverything You Always Wanted To Know About Tapas but Were Afraid To Ask
Tagged
Restaurants + Bars Trip Planning Barcelona, Spain
What did you think of this story?
Meh
Good
Awesome

Everything To Know About Legal Cannabis Consumption in Barcelona

The Best Bars and Restaurants at Barcelona’s El Prat Airport