San Diego’s coastal coves are teeming with sea lions and seals. They roll in the shallows, spar and play in the surf, and nurse pups on the shore to the delight of visitors.

However, their abundance draws major predators close to shore as well. It’s not unusual for juvenile great white sharks to cruise through the coastal waters looking for fish and larger prey, including the San Diego sea lions and seals. It makes for exciting close encounters for kayakers, surfers, snorkelers, and paddleboarders, but is also a reminder that the San Diego sea lions are part of a greater food web. It’s incredibly important for visitors not to interrupt the animals’ natural behaviors, both for their own safety and the protection of the natural balance. 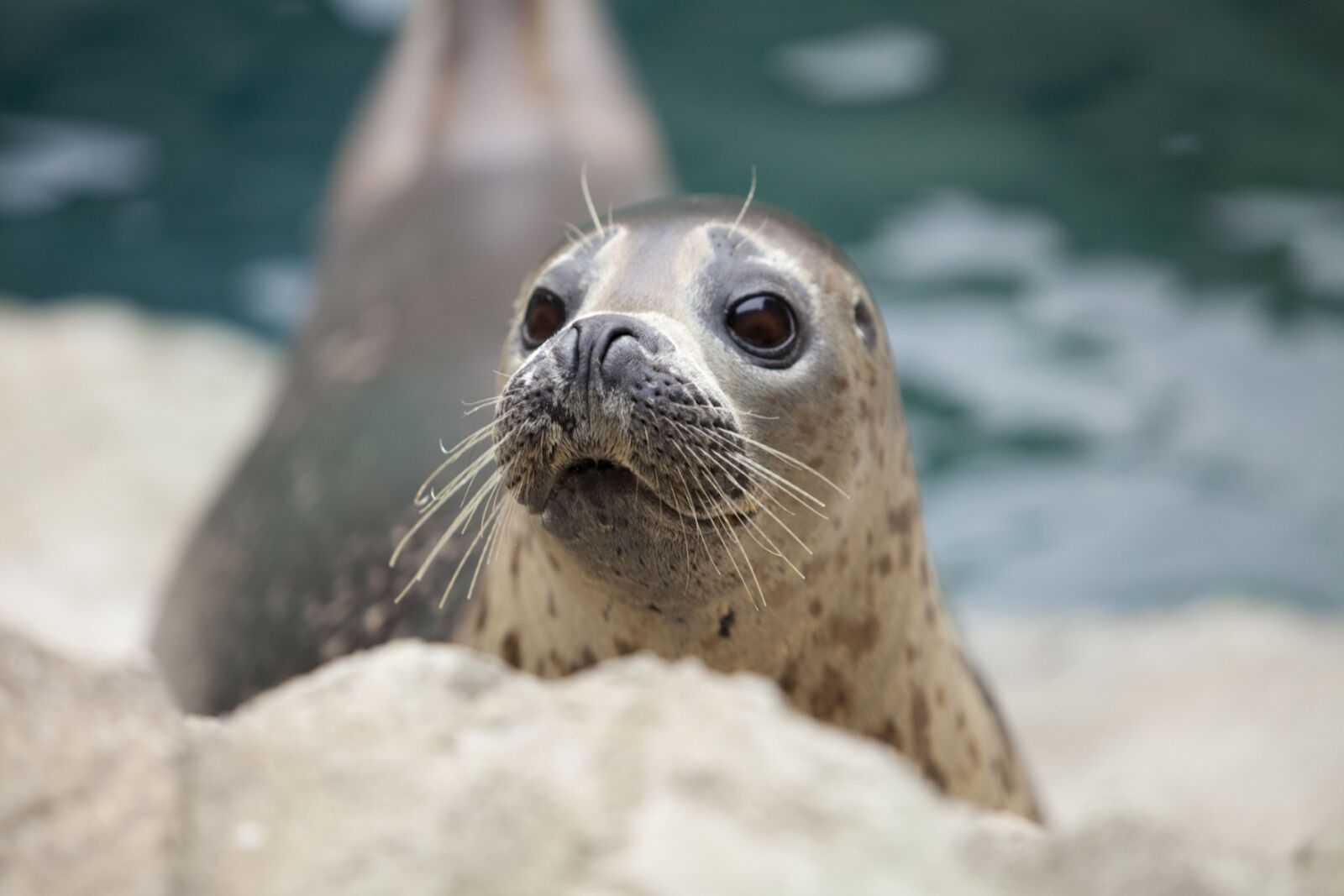 It’s easy to see the differences between seals and sea lions.

Sea lions have small, external ear flaps and can ‘walk’ short distances on land. Seals are smaller, and while they’re agile in the sea, they tend to flop around awkwardly on shore. California sea lions are generally browner in color, while harbor seals are spotted. Both seals and sea lions are flourishing in San Diego and are generally easy to spot from shore or on the water.

These gentle giants appear docile and cute, so getting close is tempting. However, as recent viral videos attest, they are unpredictable – they’re wild animals, after all. Large male sea lions will compete for access to potential mates, barking incessantly, fighting on beaches, and flailing their large bodies towards each other, not minding who gets in the way.

Seals, sea lions, and other marine mammals are protected by federal law (the US Marine Mammal Protection Act, or MMPA) and local laws in California. Most areas where they live have posted warnings and viewing guidelines. The county will rope off pupping areas and diligently remind observers to keep at least 50 feet away from all animals. Seal enthusiasts are often on hand at the most popular viewing sites and happily share information with visitors – or offer it if you start misbehaving.

Penalties for inappropriate behavior around sea lions can be quite severe, according to the MMPA, including jail time and fines of more than $11,000. Any human actions that “disrupt behavioral patterns, including but not limited to migration, breathing, nursing, breeding, feeding, or sheltering,” can be violations, so make sure you read up on appropriate behavior first. In general, humans are too close if the wild animals are reacting in any way to their presence.

The best time to see sea lions and seals 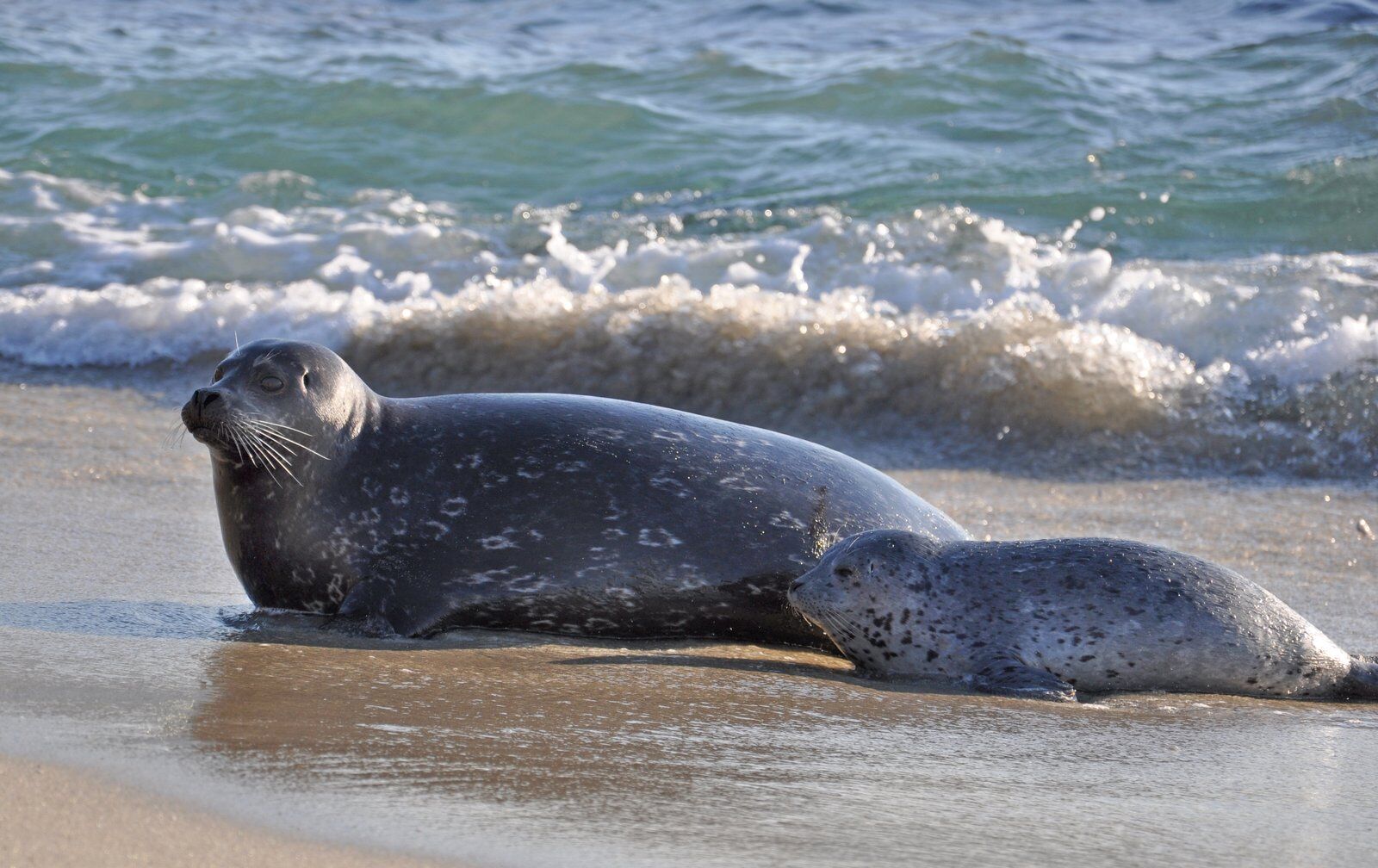 Sea lions and harbor seals are in San Diego year-round to breed and “haul out” – a term for when pinnipeds like seals crawl onto the beach to rest. Pupping (birthing) season begins in December and ends in mid-May, so it’s an ideal time to see babies (though not all baby seals make it to adulthood).

In the summer, seals are likely to be out feeding mid-day, so the best times to observe them from land are early in the morning or late in the afternoons. After chasing their meals, seals and sea lions tend to rest onshore.

Where to see wild seals and sea lions in San Diego 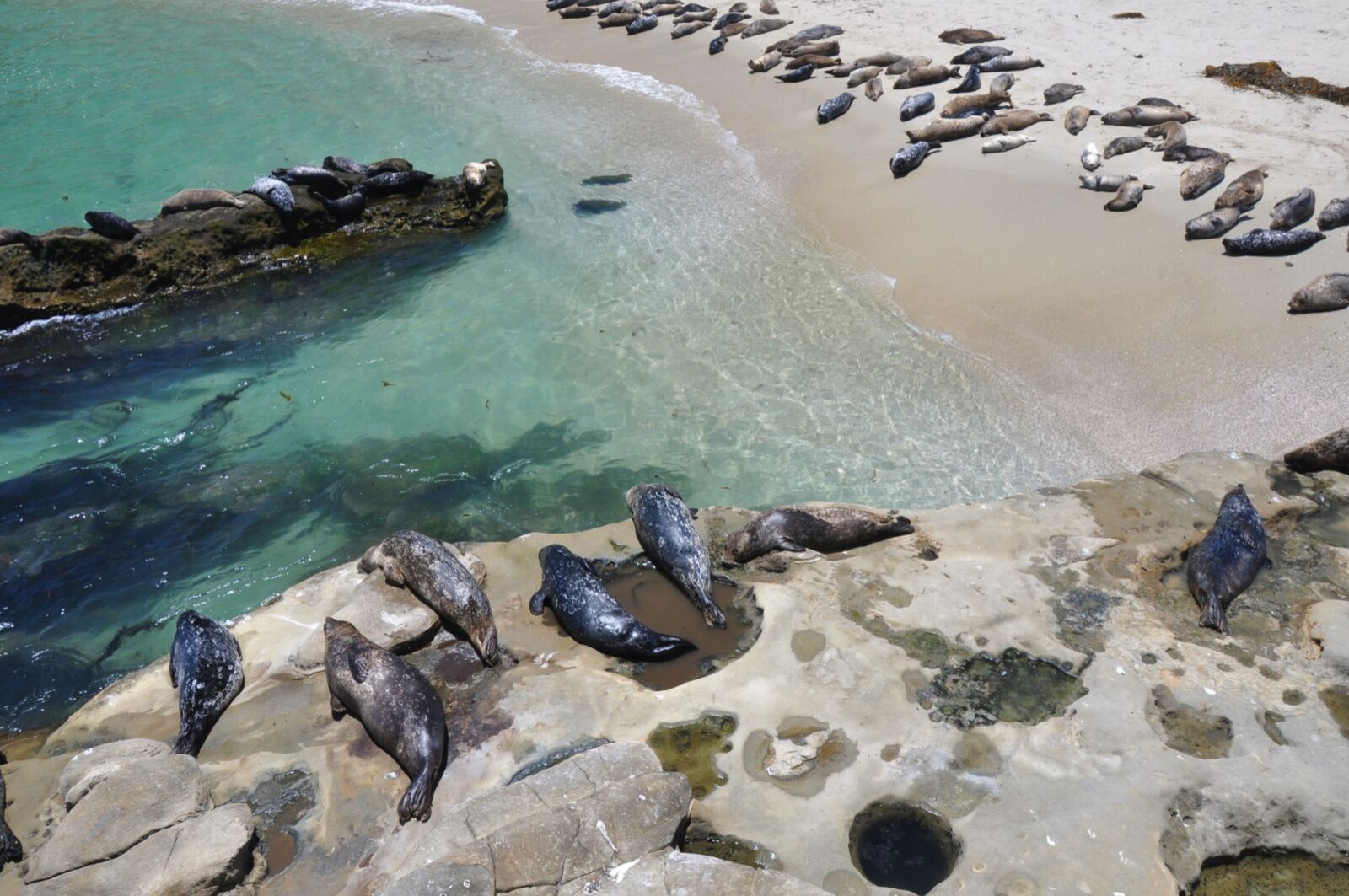 La Jolla Cove is truly sea lion central in San Diego. It’s a popular viewing spot and does get crowded.

The best spot for viewing seals is Children’s Pool Beach. The sheltered area was originally created for family recreation a century ago, but over the years, seal moms decided it was a perfect spot for their young pups, too. Controversies over who should have priority have kept the little beach in the headlines. Guests here should pay attention to signage and updates at the lifeguard station and keep their distance from the animals.

Fortunately, visitors don’t need to be on the beach to watch the animals. They’re usually visible from walking along the curved breakwater above the water line. 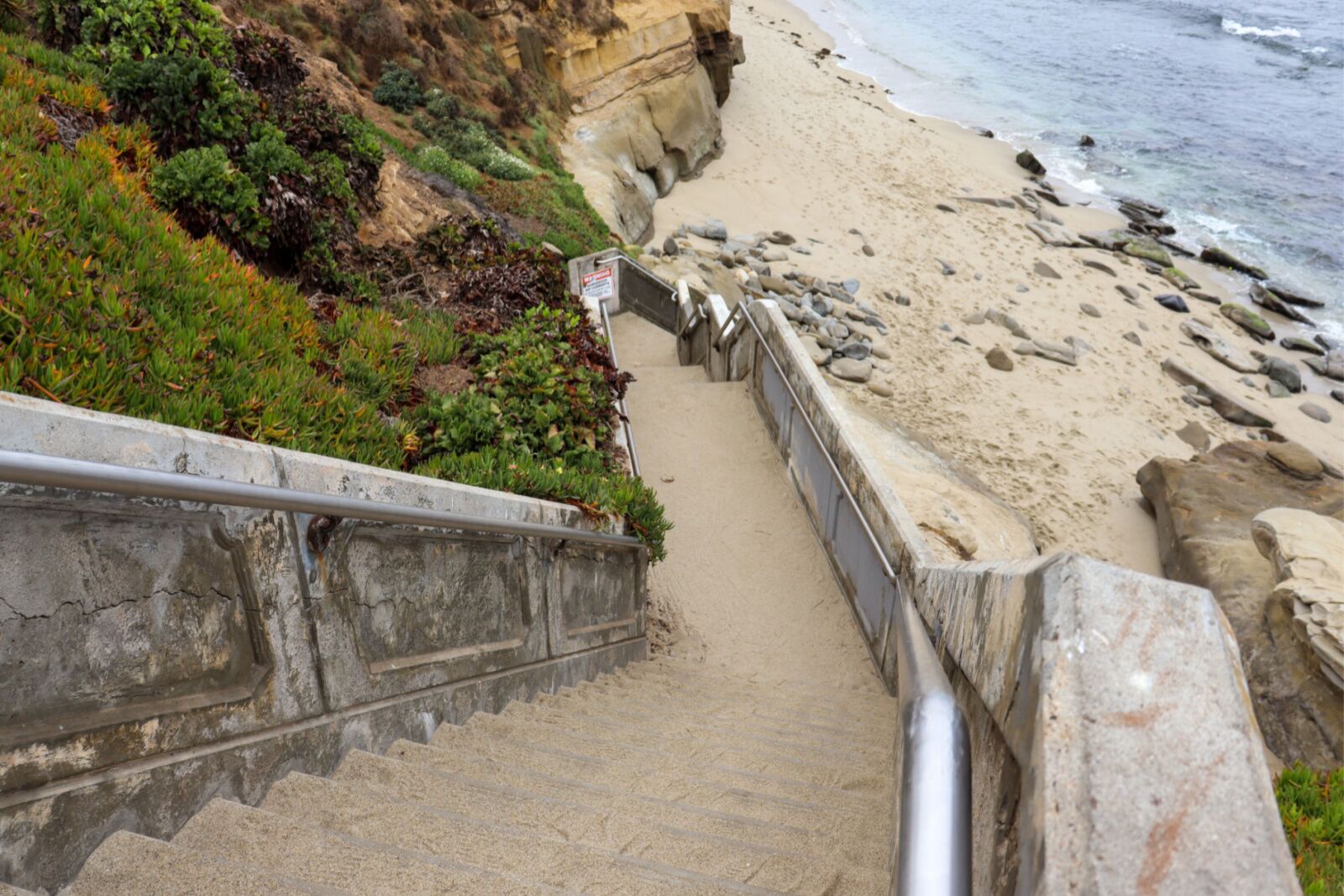 North of Children’s Pool Beach is a narrow swath of sand called Shell Beach, often dotted with dozing sea lions. But it’s not the only nearby spot. Visitors can walk further north to Boomer’s Point, where a sidewalk winds along the shoreline’s tidal rock formations where sea lions haul out to warm in the sun. You’ll probably hear the pelicans and cormorants that sit nearby and give La Jolla’s air a noticeably ‘fragrant’ odor when the weather’s dry and hot. 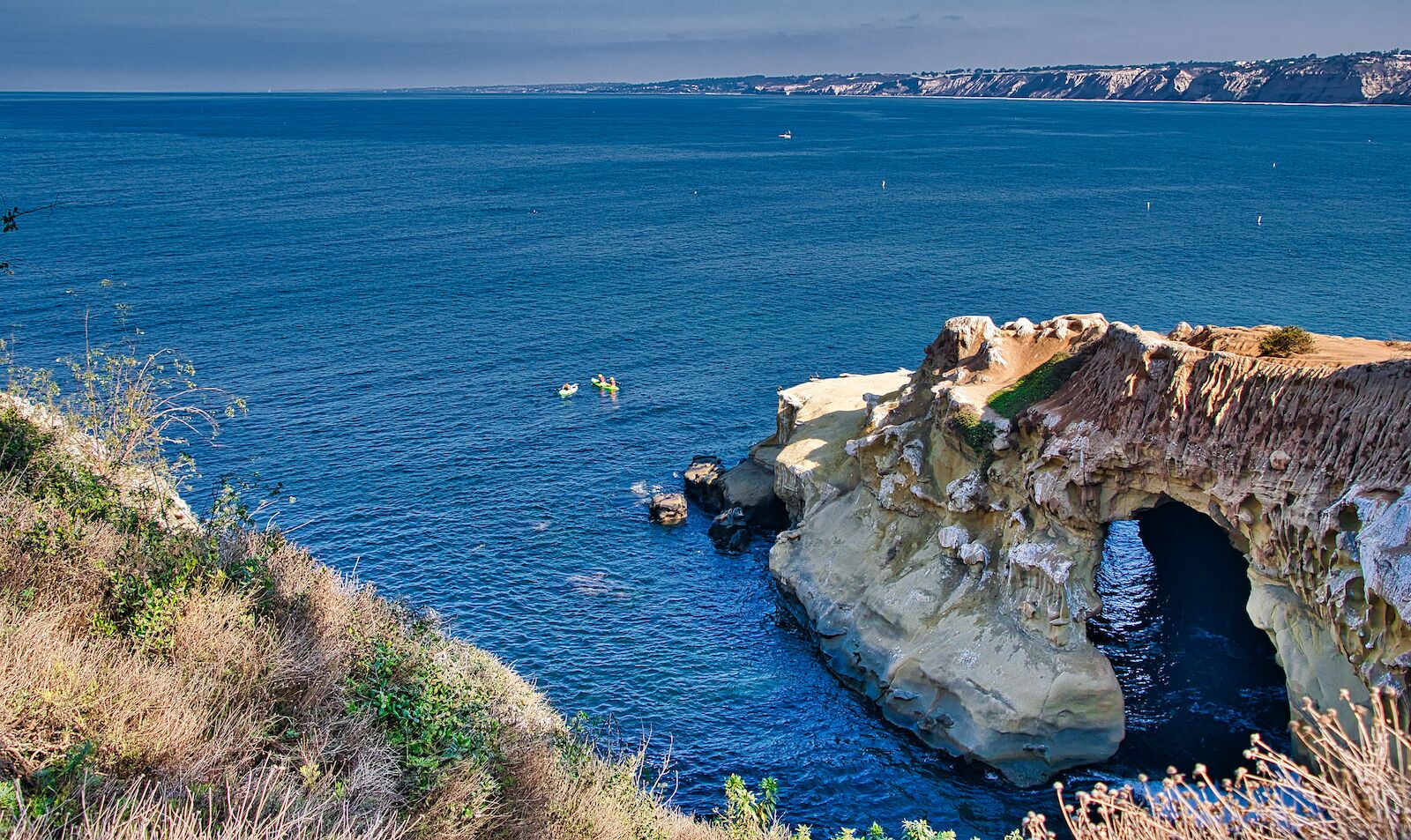 This ocean around La Jolla is part of the La Jolla Underwater Park and is a perfect spot for snorkeling close to brightly colored Garibaldi (California’s state fish) as they glide through seagrasses. It’s also a good spot to see sea lions underwater occasionally. The youngest are playful and may approach people, but snorkelers should maintain safe distances from adult animals busy looking for food and mates.

However, one of the places with the highest chances of spotting San Diego’s sea lions within the reserve is Clam Cave, one of the animals’ favorite swim-throughs. It’s visible from land to visitors from the path along Coast Blvd. It’s an excellent place to watch sea lions catapult their bulk out of the water and onto rocky ledges to loll in the sun between swims. 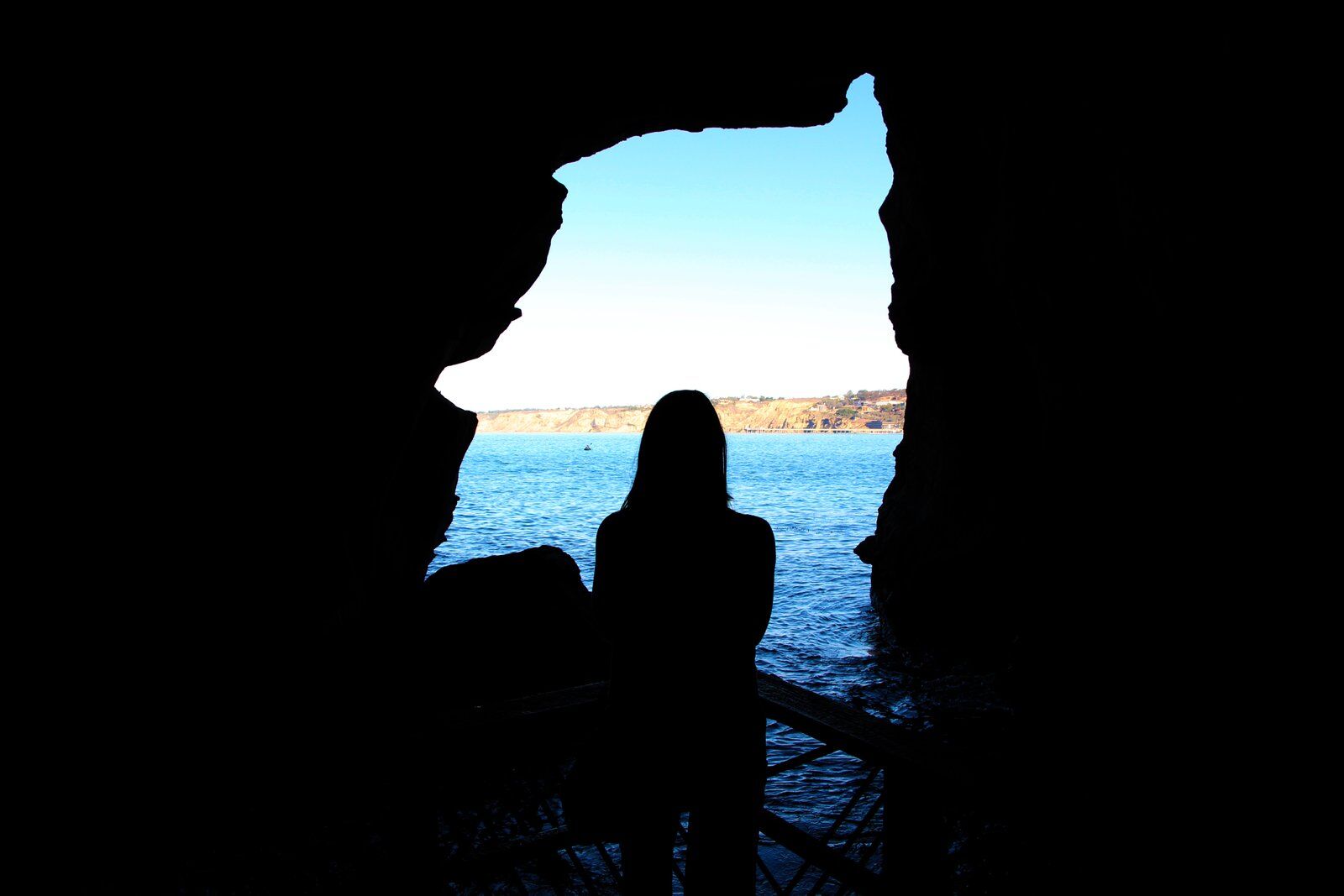 German engineer Gustav Shultz took two years to carve the Sunny Jim cave more than a century ago and rumors of smugglers using the stairway between the water and the road made the spot famous. Today, the tourist attraction lures visitors in to walk down the steep stairs to the opening above lapping waves. At the bottom of the stairway, there’s a fine view of the La Jolla shoreline, and you can hear – and sometimes see – male sea lions through the passage.

It costs $10 for adults and $6 for children to take the 20-minute cave tour. However, the topside viewing platforms and trails outside the cave are free and open to all. 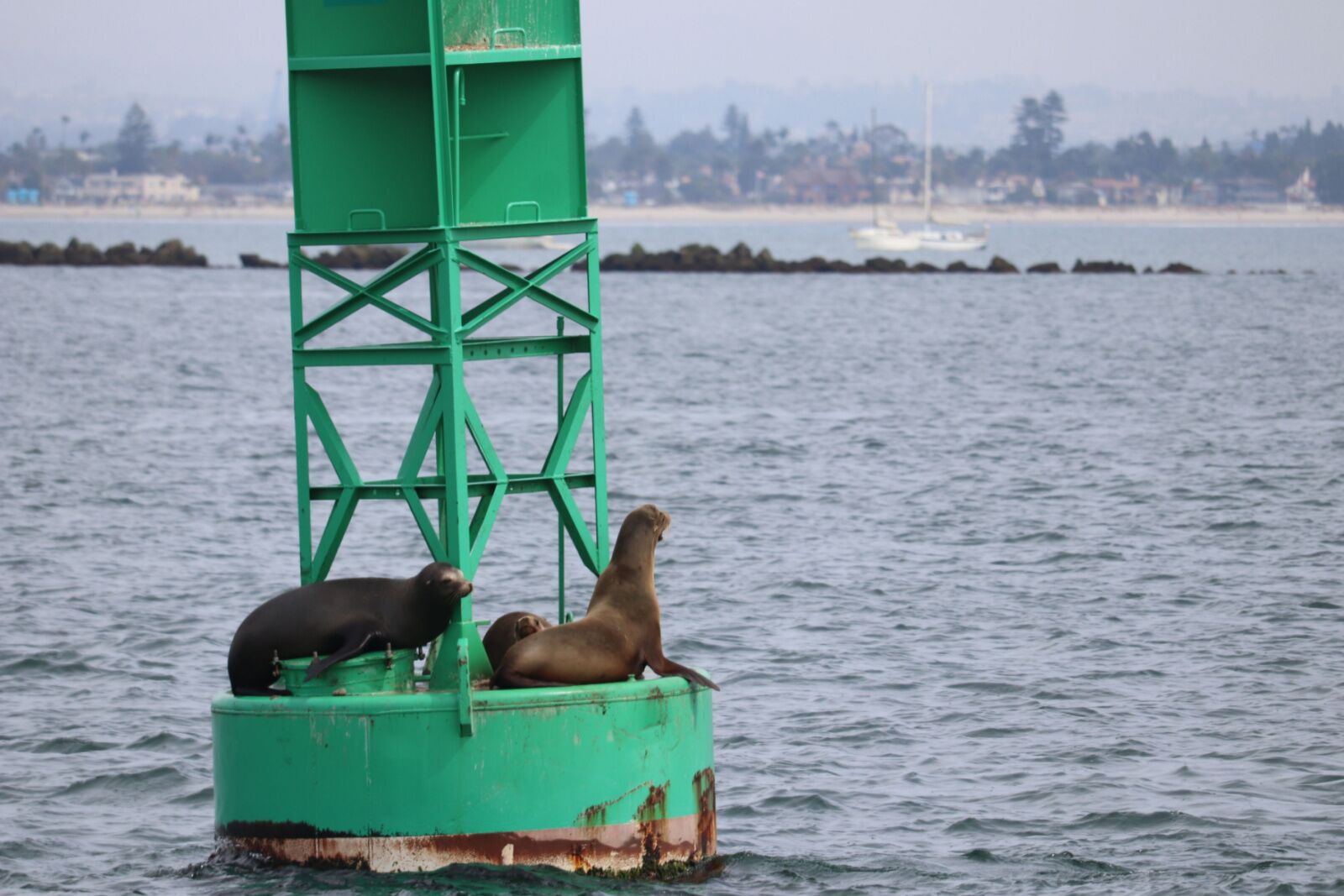 The sparkling downtown San Diego skyline is loveliest when seen from the water, and many local companies offer speed boats, harbor cruises, and winter whale-watching tours. But to have the best chance of spotting the San Diego sea lions and seals, opt for a cruise that sails between the Navy base on Coronado Island and the Point Loma peninsula, where the waters are full of California sea lions. They often lounge on the buoys in the middle of the channel or on the boulders of the manmade breakwaters when the tide is right. 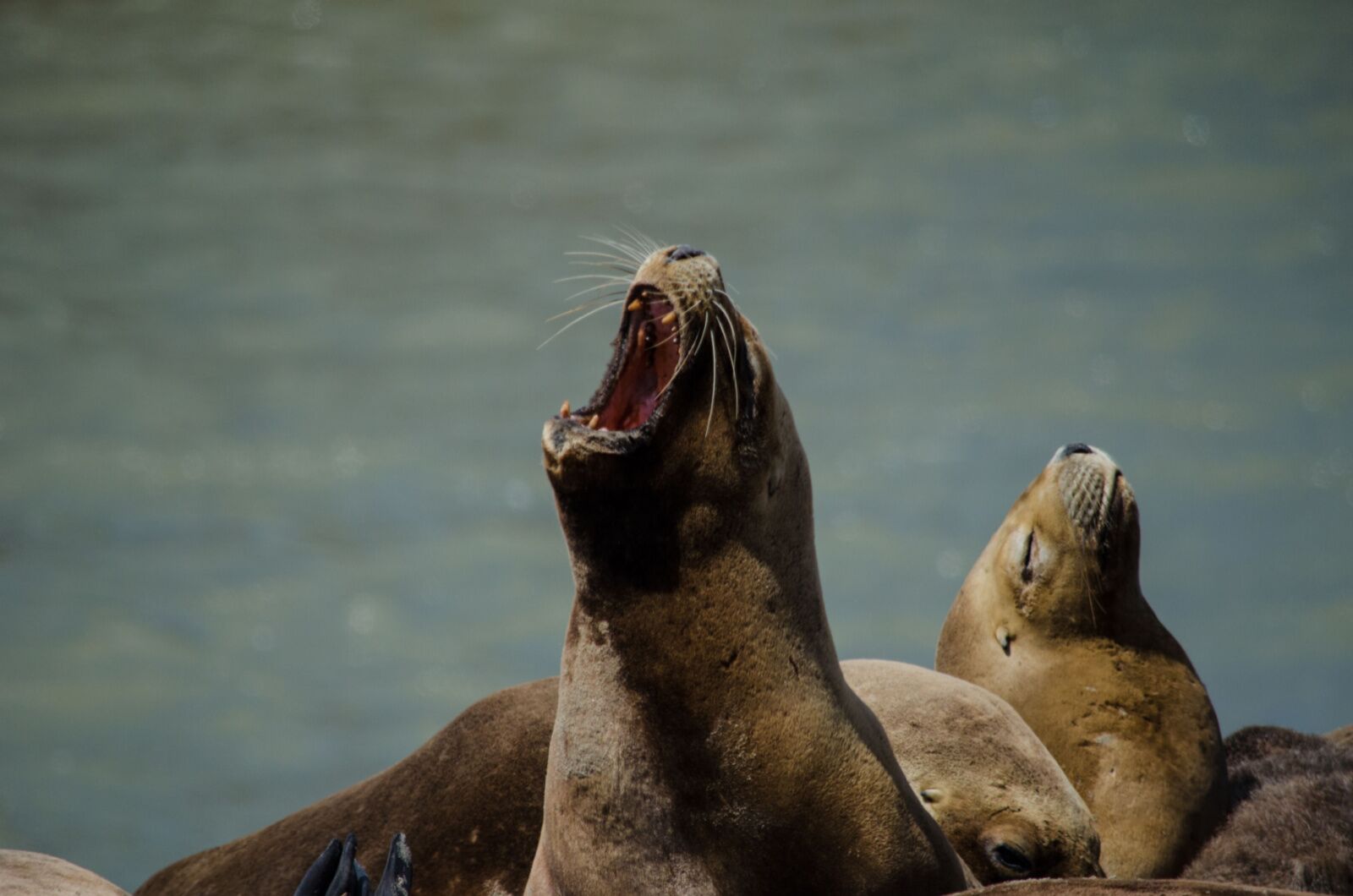 Sea lions have claimed one end of the San Diego bait barge owned by Everingham Bros. Bait Co. to sunbathe in a clump on the extended platform. Most of the time, they’re sleeping. It’s a good place to see them from a kayak, which visitors can rent from operators on nearby Shelter Island. The closest rental shop is Action Water Sports, inside the Kona Kai Resort. 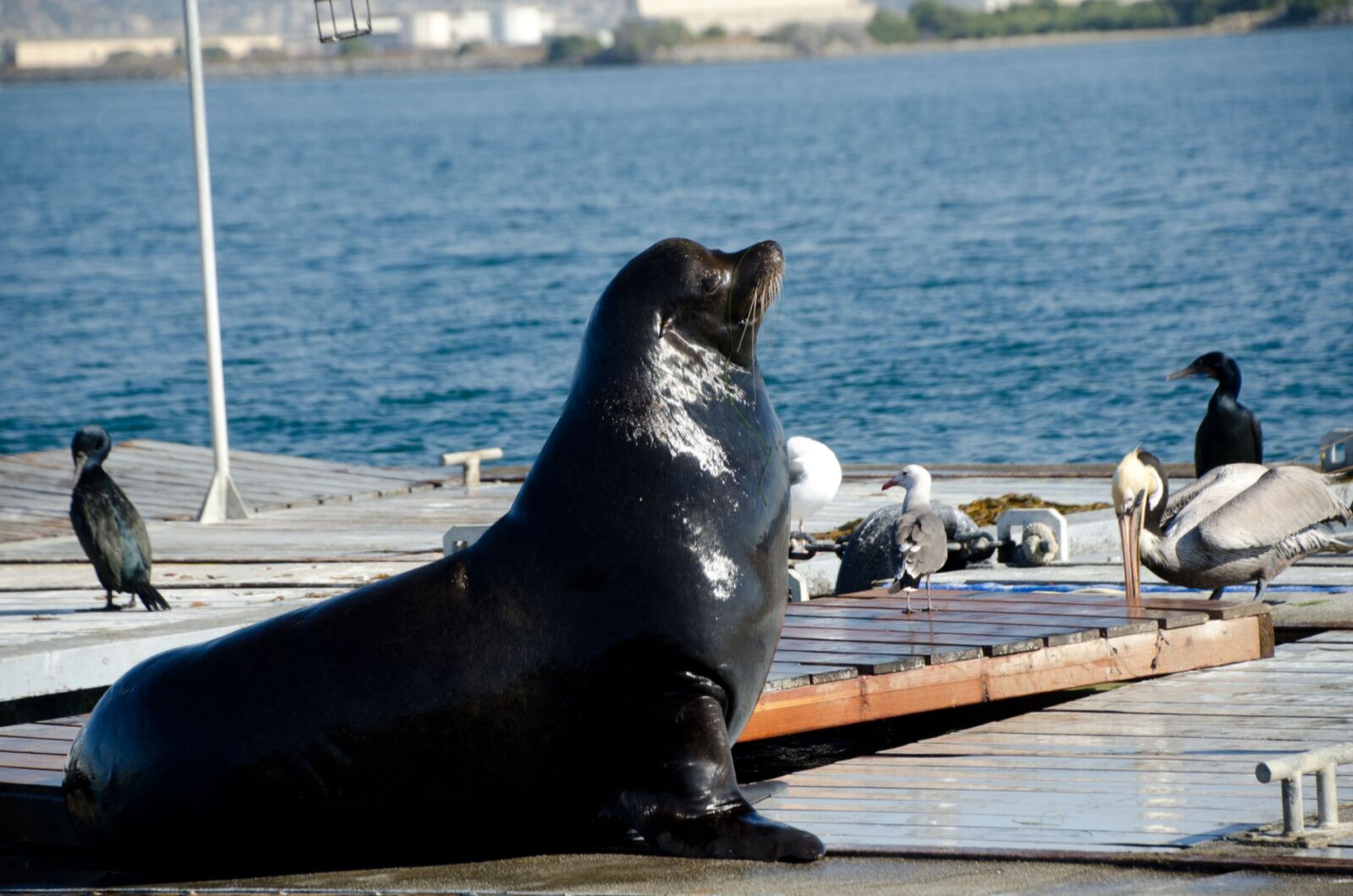 Shelter Island is well worth a visit for its restaurants, views, and wildlife. Seal lions frequent the docks, hunting for scraps from the commercial and sport fishing boats. The best place to spot seals and sea lions from land is from the raised walkway of the new boat ramp and launch bay near Humphries.

The importance of seeing sea lions in the wild 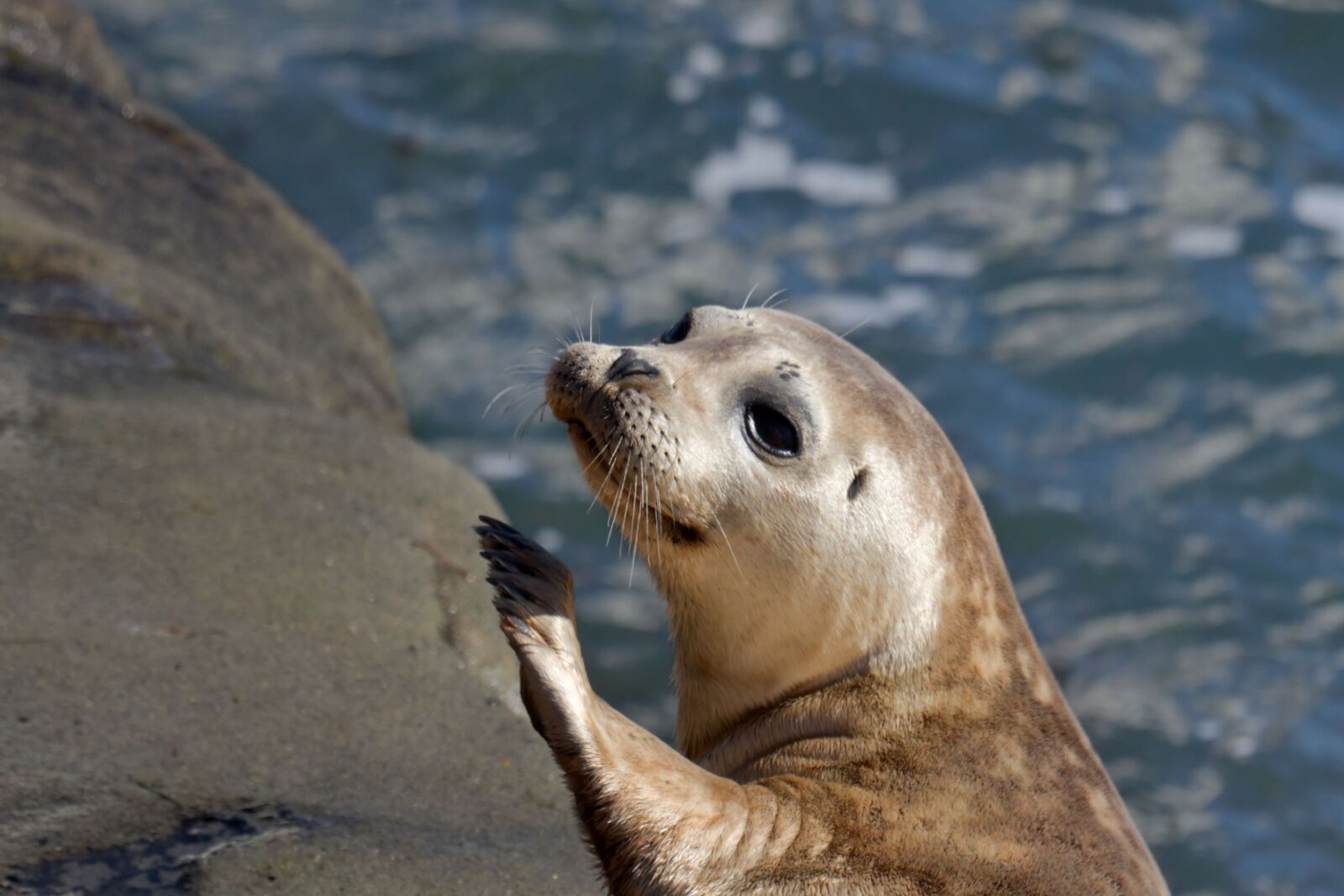 Sea lions and seals are a key part of San Diego’s ecosystem. When guests travel to certain areas to see them in the wild, it helps bring in tourism spending near those areas, which proves that wildlife viewing can be profitable for area businesses and leads to public support for marine protection.

Climate change is also a huge threat as creatures in the ocean food web like seals, sea lions, sharks, fish, and kelp are all negatively impacted by rising ocean temperatures. And an imbalance in the food web can cause predators to become more desperate for food, leading to negative human-animal interactions.

There’s nothing quite like watching a mother nurse her new pup, seeing a young sea lion venture into the water for the first time, or watching an adult male defend his breeding rights. By seeing San Diego’s sea lions and seals in person, visitors can gain a personal appreciation and connection to the animals, making it easier to understand why the cute creatures need to be protected.

Beaches and IslandsTwo Sea Lions Took Back a Crowded San Diego Beach, Proving Who Really Owns the Sand
Tagged
Outdoor Wildlife
What did you think of this story?
Meh
Good
Awesome

The 16 Best Bachelorette Party Destinations in the US
Where To Go Bioluminescent Kayaking in the United States, From Puerto Rico To the PNW