WHAT ARE some good reasons to visit San Francisco? Blues, folk, indie, psychedelic rock…the list goes on and on in a city that values the cutting-edge over the mainstream. Here you can follow in the footsteps of hippie counterculture with jam bands at the Fillmore, watch a jazz legend from your comfy bar perch, or spend a lazy afternoon in a cafe listening to Spanish guitar. From underground artists to international legends, you can get your fix any day of the week, and you’ll likely have a friendly crowd to enjoy it with. 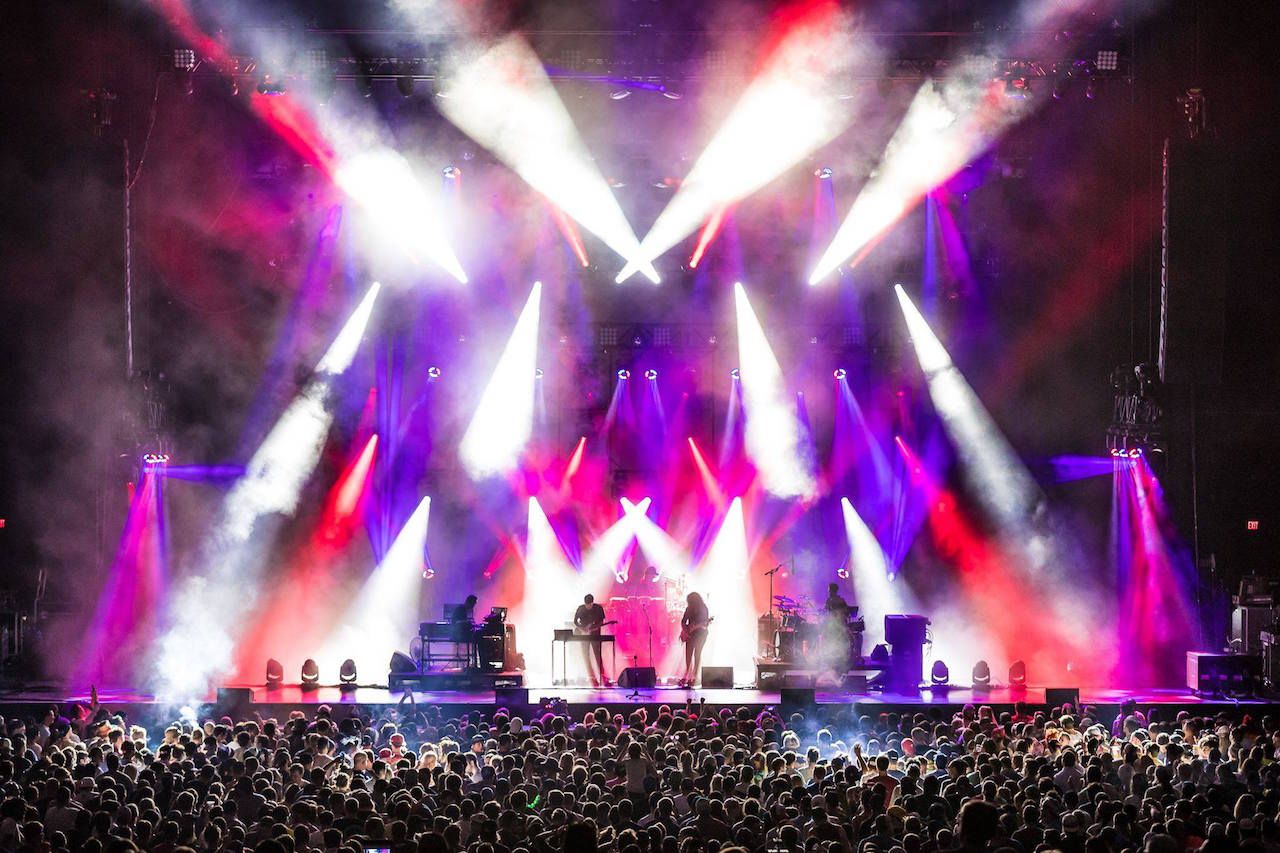 The Fillmore is a total must if you’re looking for a classic San Francisco experience. Many, many legends — from the Grateful Dead to Jefferson Airplane to Quicksilver Messenger Service — launched into fame here. And many more (Metallica and Prince, just to name a few) have kept it hot nationally. The psychedelic ghosts of San Francisco’s past grace the magnificent stage and lend extra mojo to the pristine sound system, through which icons Damian Marley or Ani DiFranco make their mark. Dance with an amazing crowd in the spacious, 1,000-person capacity room, wander upstairs to a bar steeped in history.

Best night of the week: Thu-Sat bring out the big names, the best crowds, and the most full-on experience.

Hours of operation: Varies according to the show.
Address: 1805 Geary Street 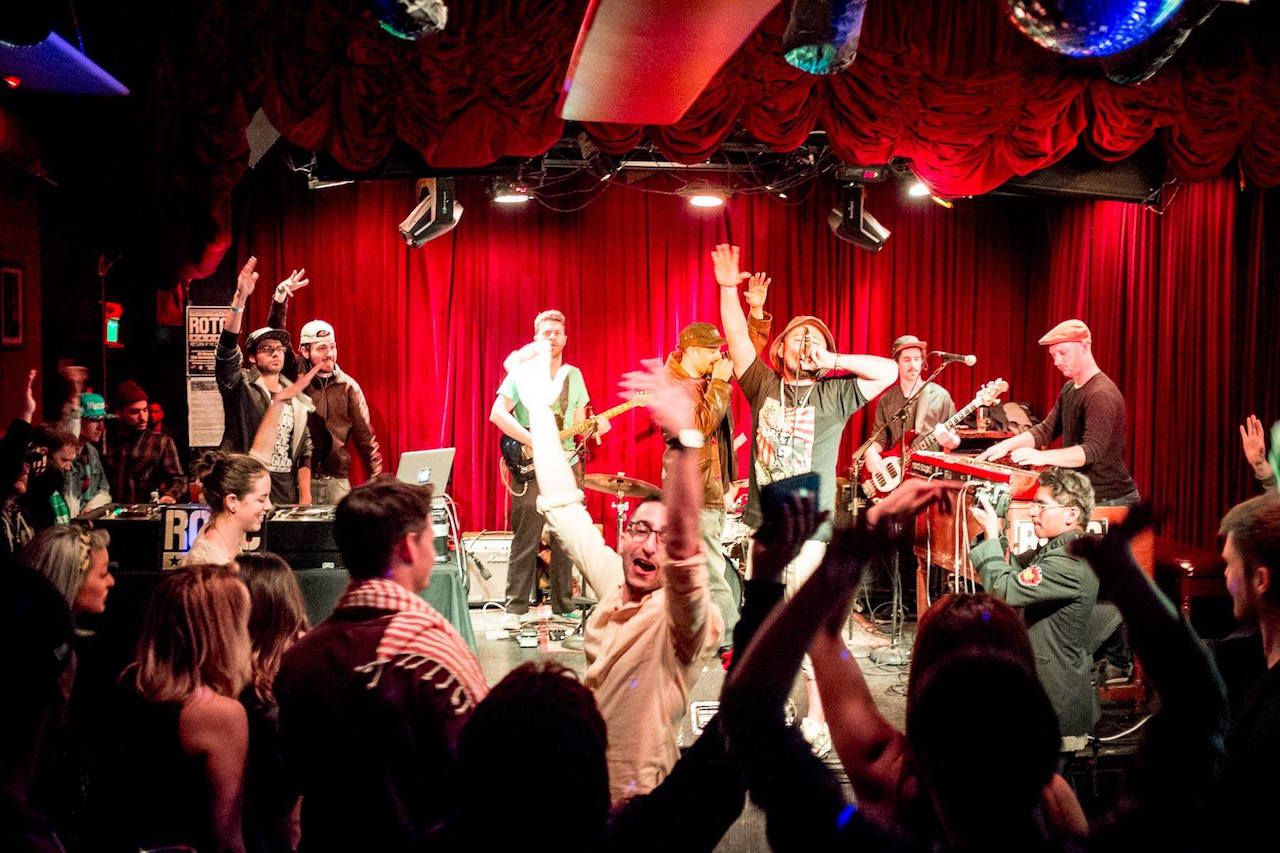 This funky and slightly edgy bar across from the famous Fillmore draws some of the city’s biggest jam and funk band buffs. Performers at Boom Boom Room are seriously in sync with the crowd as they deliver their psychedelic rock, funk, or blues tunes late into the night. Be prepared to sweat, let loose dancing up close and personal with the band, cozy up with old and new friends at a candlelit table, or strike up a convo with the people outside.

Best night of the week: Friday and Saturday late nights bring the biggest crowds when the city’s music freaks pour out from the shows to party late into the night. 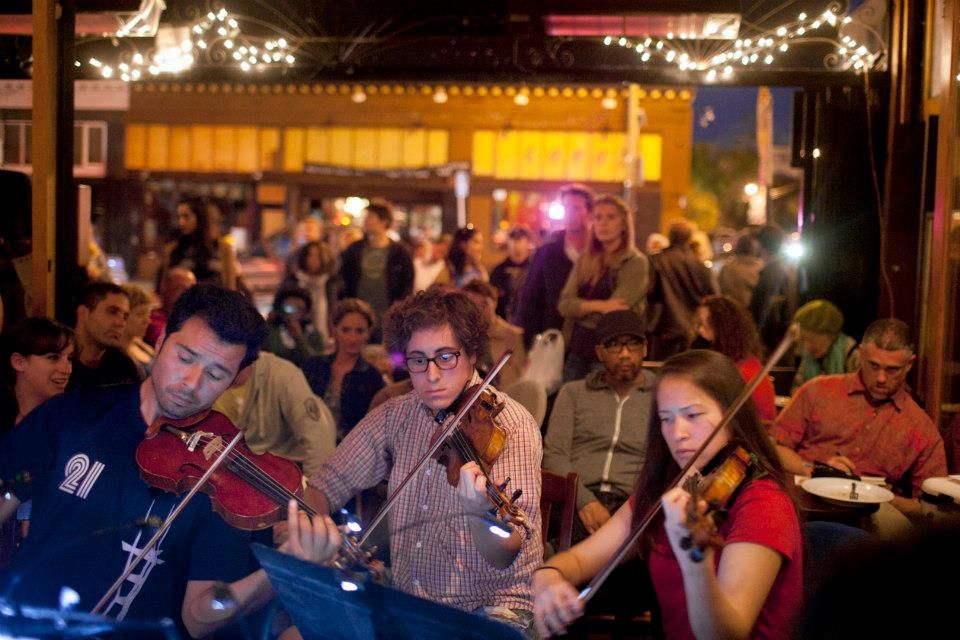 A funky, free-spirited crowd fills this cozy open-air venue which has European-style cafe seating. Perfect for people-watching among the artistic crowd, writing poetry, or jammin’ on the piano if it’s free. Best of all, there’s free live music every day, from jazz to global, to classical. Have a beer or espresso, roll your cigarette at a table outside, and drift in and out of a book as you take in the musical talent.

Best night of the week: The local farmer’s market on Thursday evenings brings a buzzy vibe to the area, making it a great time to absorb the local culture. Stroll the market before you settle into Revolution Café, and you’ll feel like a true San Franciscan. 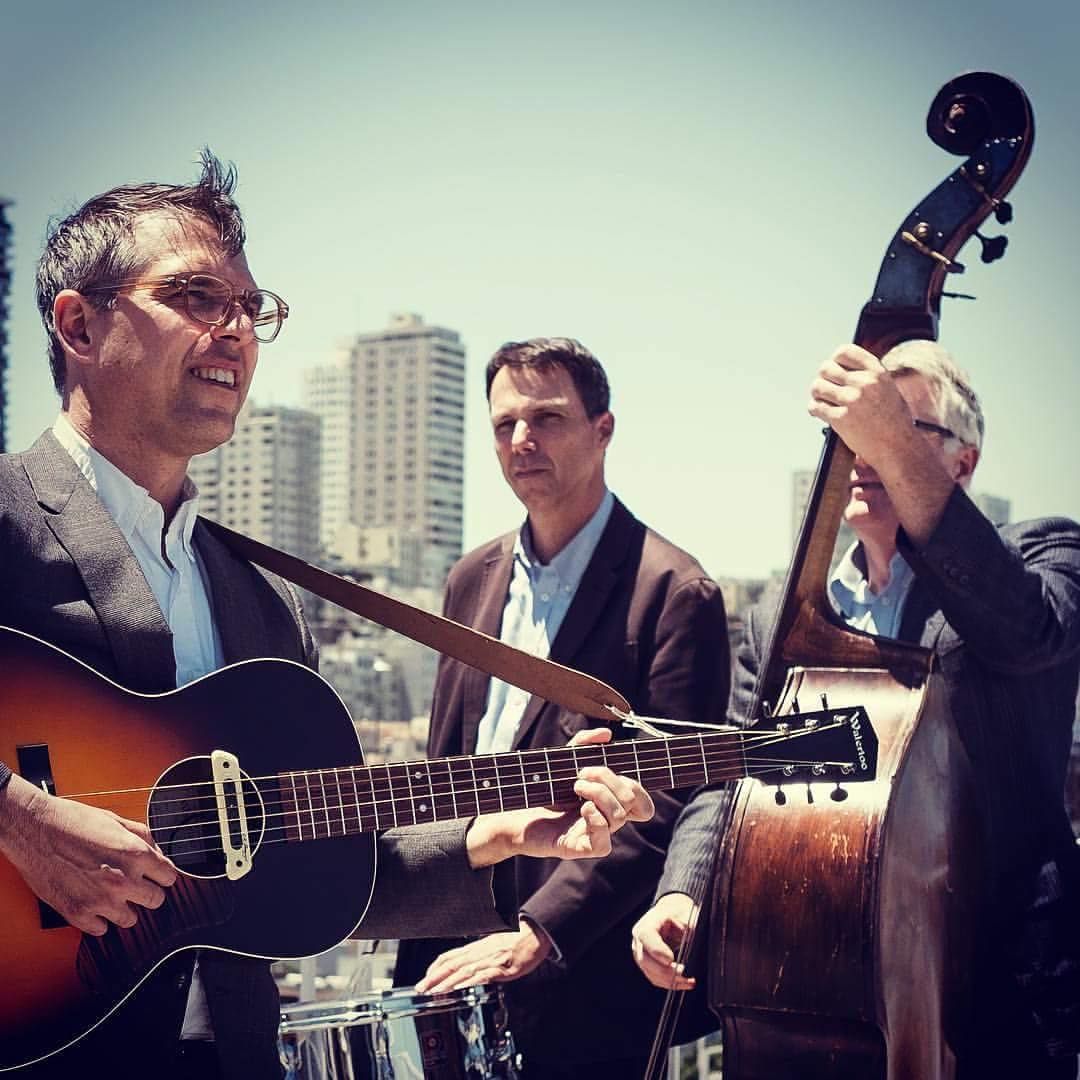 As you walk along Valencia corridor, bored by endless boutique clothing, stationary, or designer clock stores, the sound of Bluegrass suddenly brightens your lackluster evening. You peek your head into a dark and mysterious little entryway: a woman sings soulfully on stage and the crowd has a real bounce in their moves. Amnesia is a divy neighborhood venue that hosts music every night.

Best night of the week: Mondays — what better way to start the week than with a little Bluegrass! There are just enough people to give it a gently crazy vibe, and that makes for a fun, relaxing start to the week.

Photo: Jacob Romero via The Chapel

Standing outside this converted church on Valencia corridor, a small venue with a slick bar and restaurant attached, you’ll gaze up at a list of bands that many hipsters will know and love. Those ready to worship at the altar of underground rock will feel transported underneath the high vaulted ceilings, amid a sexy crowd. Bonus: The Chapel‘s bar serves up a tasty selection of craft beers.

Best night of the week: There are nightly acts, but Thursdays bring a nice crowd without the hassle of drunken weekend mobs on Valencia.

Hours of operation: Chapel Bar open from 7 PM – 2 AM and leads right into the show.
Address: 777 Valencia Street (Mission District) 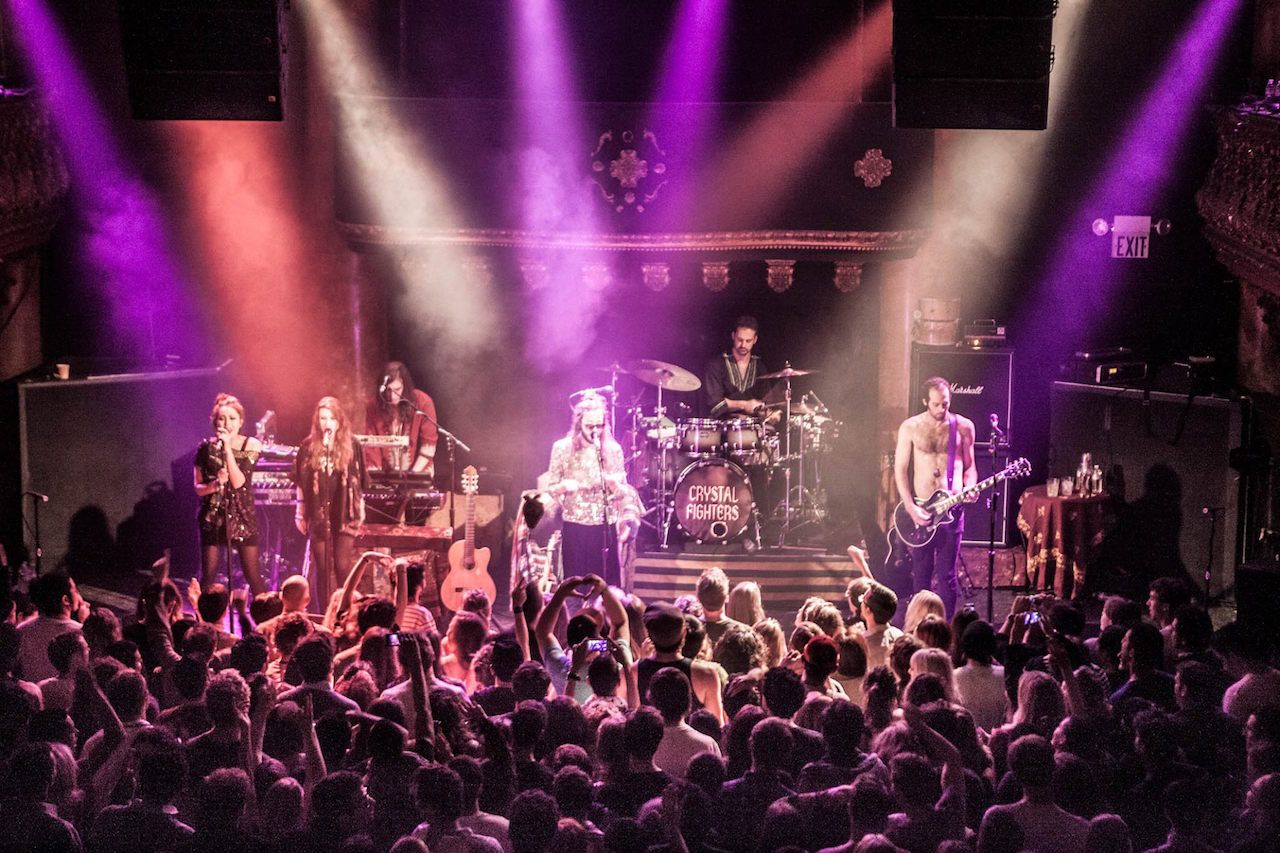 A slice of SF history with gorgeous ornate architecture voted #6 of America’s Best Clubs in Rolling Stones magazine in 2013. Located in the gritty Tenderloin (which has its own cast of characters), the Great American Music Hall hosts both big and small acts (past artists include The Arcade Fire and Patti Smith). Said to still be haunted, you may find yourself wanting to linger under the frescoed ceilings long after the show ends.

Best night of the week and why: Thu-Sat bring the best entertainment and the fullest house.

Hours of operation: Varies according to the show.
Address: 859 O’Farrell Street 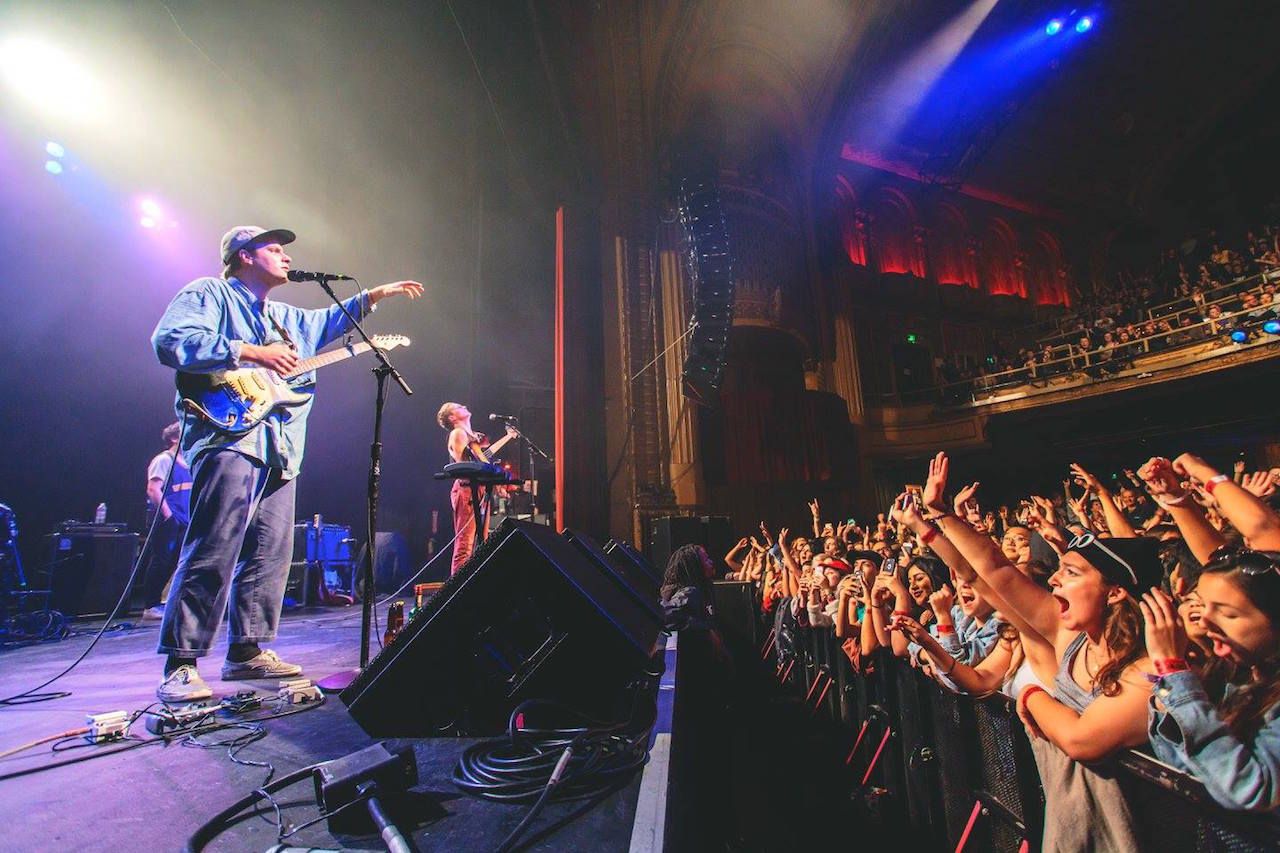 The Warfield is a breathtaking, slightly rustic theatre built in 1922 to showcase vaudeville and silent films — you’ll see evidence of this in the grand staircase and chandeliers. Catch bigger names in this more traditional, spacious concert hall — like Iron and Wine, Culture Club, and Kansas. It has good acoustics, decently priced drinks (for San Francisco), and amazing architecture. San Franciscans have been coming here for decades.

Best night of the week: Any day your favorite band is playing — everyone’s here to see a great show, which could as easily be a Wednesday as a Friday.

Hours of operation: Varies according to the show.
Address: 982 Market Street 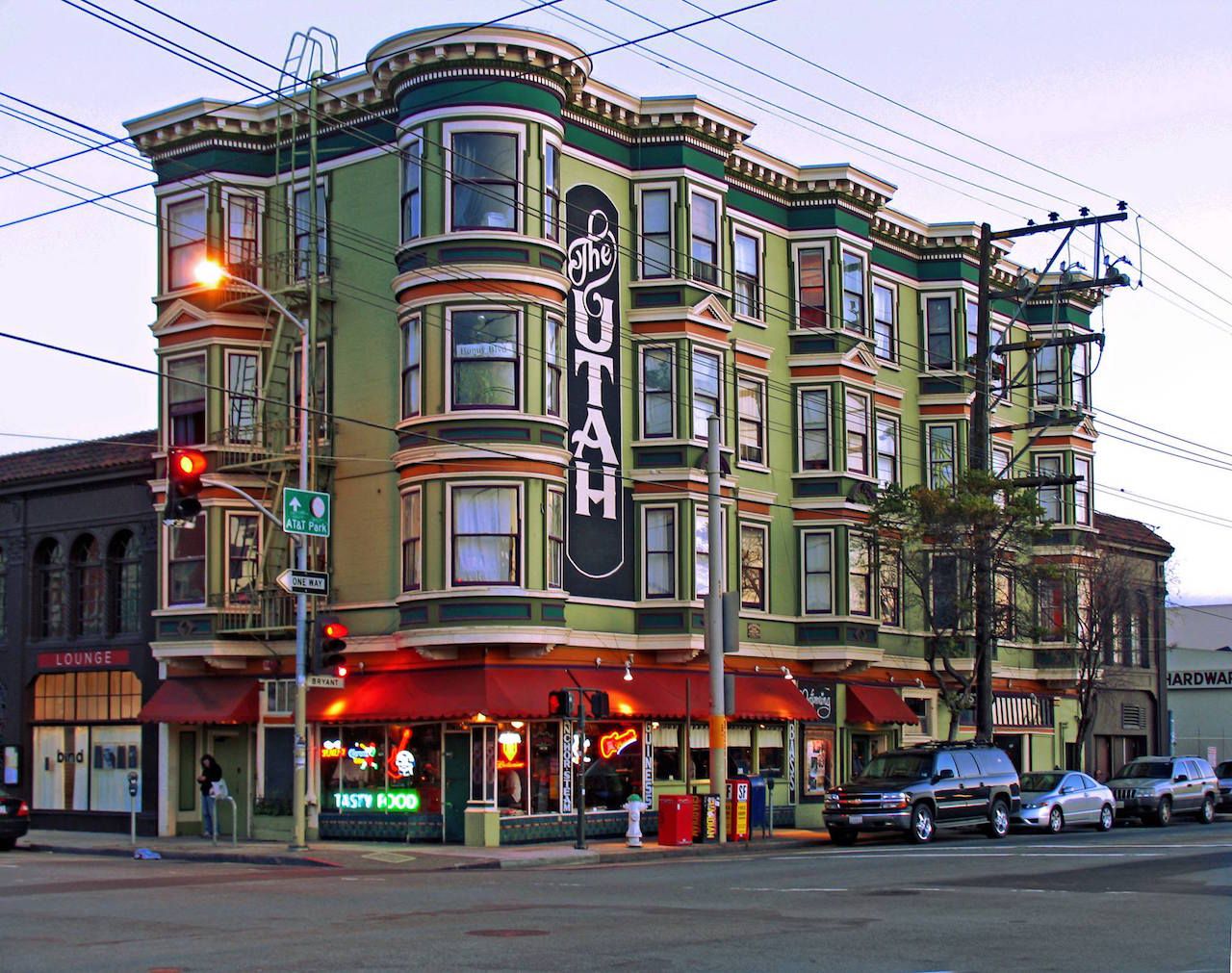 The Hotel Utah Saloon is a cute country bar with a colorful history dating back over 100 years. Its small stage and cozy seats are great for watching a variety of local and national acts — take your pick of country, soul, indie rock, “ArtPunk”, and much more. Its reputation for hosting gamblers and thieves, as well as celebrities like Marilyn Monroe and Joe DiMaggio, brings a deep ambiance, and the laid-back bartenders are refreshing. Take a Lyft or Uber, as it’s a little out of the way.

Best night of the week: While you’ll find great music any day of the week here, we vote for Monday night open mic — one of the longest running in town — for its amazing mix of talent. 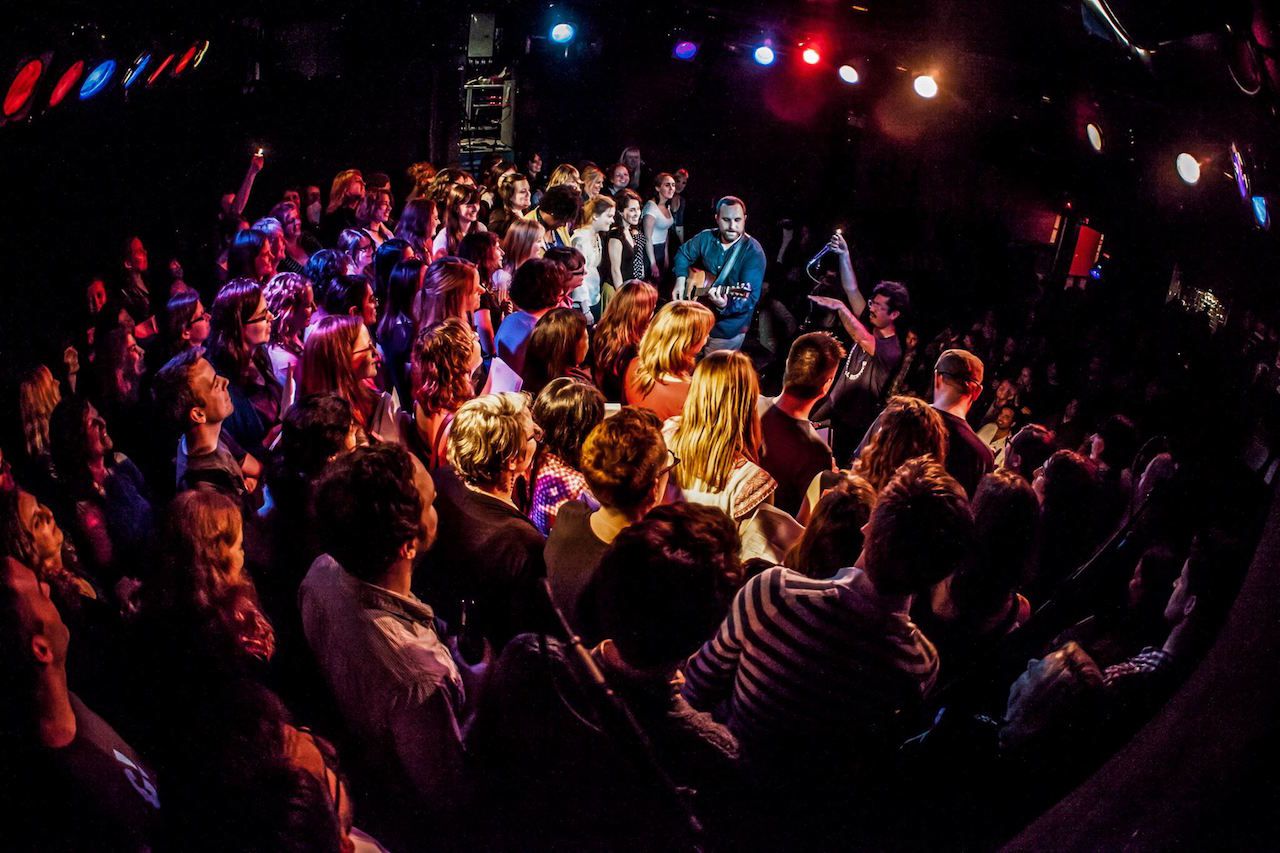 Slim’s is a raw, grungy nightclub for watching live rock, punk, or indie shows. Located on a buzzy strip in SoMA filled with bars and EDM clubs, it’s a fun place to watch people cavorting in leather or tutus outside. An enduring favorite among San Franciscans, Slim’s has hosted artists like the Foo Fighters, Prince, Radiohead, and Suicidal Tendencies. It’s consistently been voted one of the best venues in the city by local publications.

Best night of the week: Weekends bring the big names and the buzz from the surrounding area, which is part of the attraction.

Hours of operation: Varies according to the show.
Address: 333 11th Street (SoMa)

The Rickshaw Stop is not only known for hosting indie bands and DJs but other coolness, such as Burlesque shows and Electroswing parties. Quirky and cozy with a playful vintage vibe, the 4,000-square foot venue — once a TV studio — is big enough to host small live performances and still feel intimate. Wear your favorite funky outfit or vintage threads to mesh with the crowd. Arrive early to get a seat on the balcony and order a Pringles-crusted corn dog from the menu.

Best night of the week: While you can catch great music most nights, Thu-Sat bring the best acts.

Hours of operation: Varies according to the show.
Address: 155 Fell St

Huge international acts tour through the Bill Graham Civic Auditorium — Die Antwoord, Slayer, Jimmy Buffett, are on their current calendar. This is a giant venue with a huge dance floor, so you’ll get a big, rowdy crowd if that’s what you’re looking for. Multiple levels provide you with the chance to escape to more private upstairs seats. The main draws are the artists that tour through here and the fact that it’s located in the epicenter of the city. Just be careful as you exit as the neighborhood can be sketchy.

Best night of the week: Whenever your favorite act is playing — plan ahead as they only host big acts a few times a month.

Hours of operation: Varies according to the show.
Address: 99 Grove Street 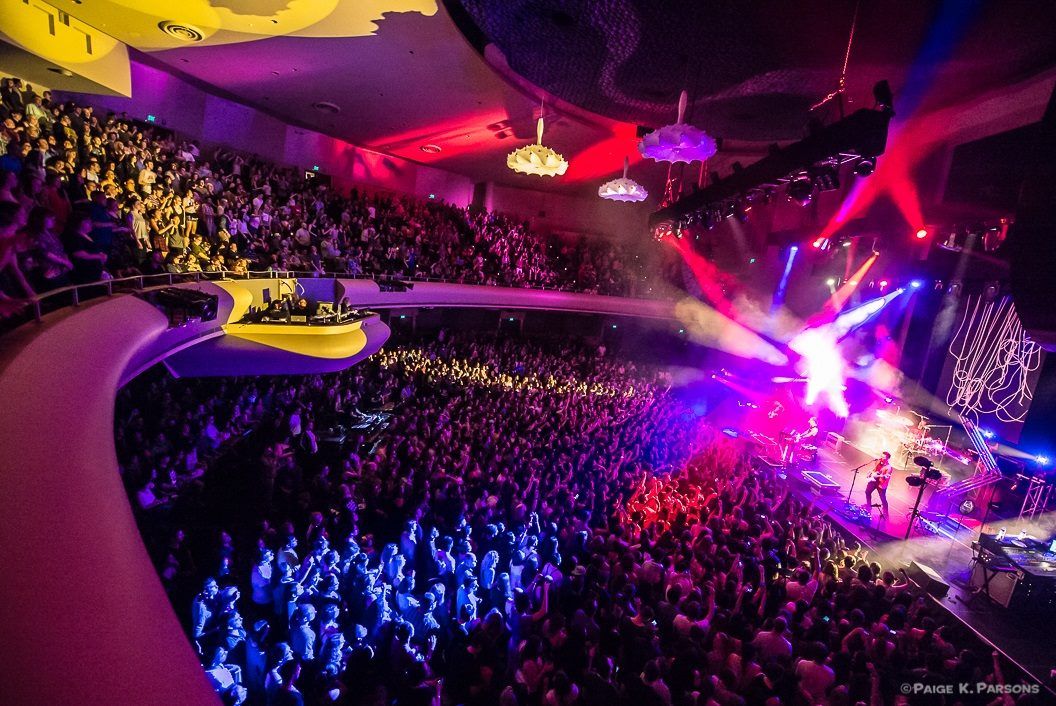 Unusual artistic theatre in a prestigious neighborhood, with a sculpture of a battle between good and evil on the outside walls. The Masonic brings big names in its historic building like Thievery Corporation, Duran Duran, and Natalie Merchant. With a capacity of around 3,500 and balcony seating, this is one of the bigger operations in the city. Have a classy meal before the show to make it a night on the town.

Hours of operation: Varies according to the show
Address: 1111 California Street 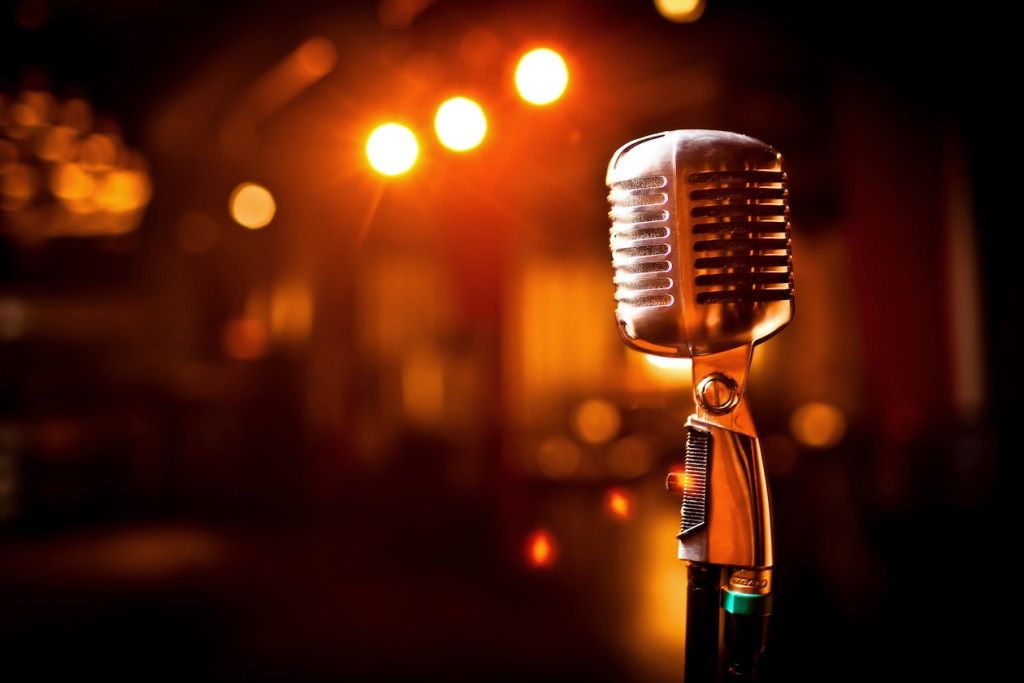 It can be hard to find a genuine jazz bar in SF that rivals NY or Paris… a jazz joint that does what it should — help you melt into your surroundings comfortably — with a nice cocktail in hand. Deluxe delivers. It has free live jazz every night and a decades-long reputation. Its velvety vibe includes 50’s decor, a lively bar with cocktails and pizza, and plenty of room to dance. Nice place to spend an early weekday evening or get wild on a weekend night.

Best night of the week: Tue-Thu nights are laid back, so you can relax and sip your martini with the locals. 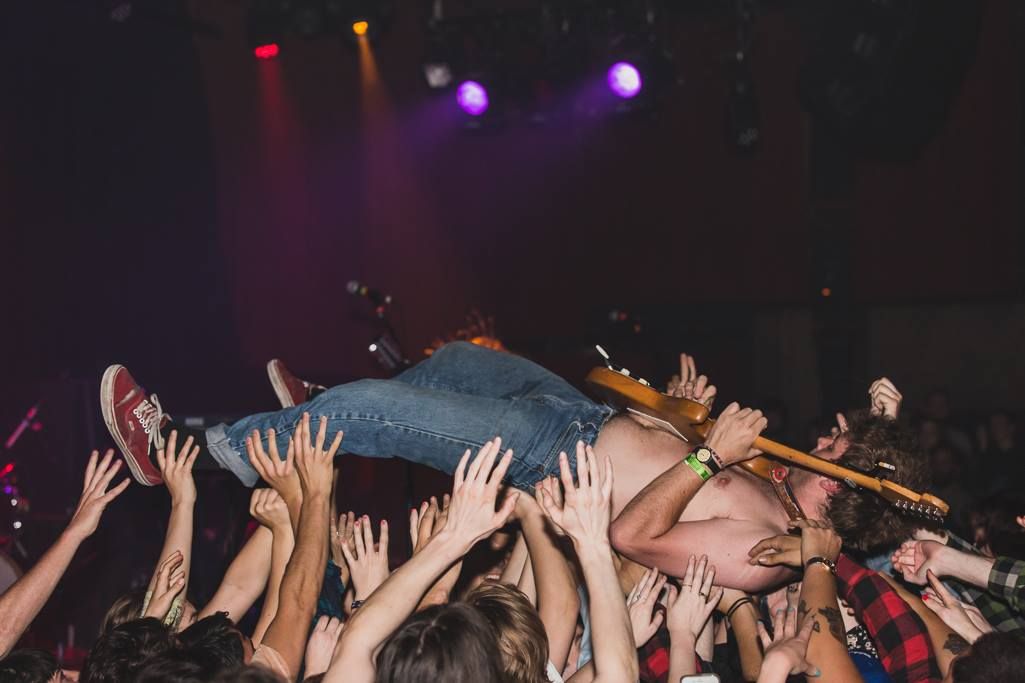 Photo: Justin Yee via The Independent.

Another staple on the SF Indie music circuit, The Independent is intimate and easygoing with a tendency to draw a lot of locals. Nice sound system to showcase bands like George Clinton, Parliament Funkadelic, and Everlast. Located on bohemian-chic Divisadero corridor, you have plenty to choose from for dinner and drinks before and after. Or finish your night with a pit stop at Alamo Square Park to take in a night skyline.

Best night of the week: Shows run throughout the week, but they promote Thu-Sat as their best nights.

Hours of operation: Varies according to the show.
Address: 629 Divisadero Street

Reputedly the oldest bar in SF, The Saloon is a VERY divy blues bar that brings out all sorts of characters — bikers, beatniks, poets, and, of course, blues fanatics who come to catch some of the greatest acts in the city. This venue sits on the corner of an alley in North Beach, right in the middle of other local traditions — The Beat Museum, Caffe Trieste, and Cafe Romelo to name a few. There are no frills here — just great music, friendly bartenders, and no judgement. Prepare to dance.

Best night of the week: Tue and Wed are less jam-packed than other days — plenty of dancing room!