Saxon Switzerland National Park is a magnificent nature reserve that suffers from mistaken identity. You’d be forgiven if you thought it was in Switzerland, but you’ll actually find this forested, rocky wonderland in eastern Germany on the border with the Czech Republic. Saxon Switzerland got its name from two Swiss men who explored the area in the 18th century and were reminded of their home country. Although established in 1990, the park’s 36 square miles of land still feel relatively undiscovered by tourists — which is just one of many reasons why Saxon Switzerland is a hiker’s dream.

The landscape is one of the most unique in Europe. 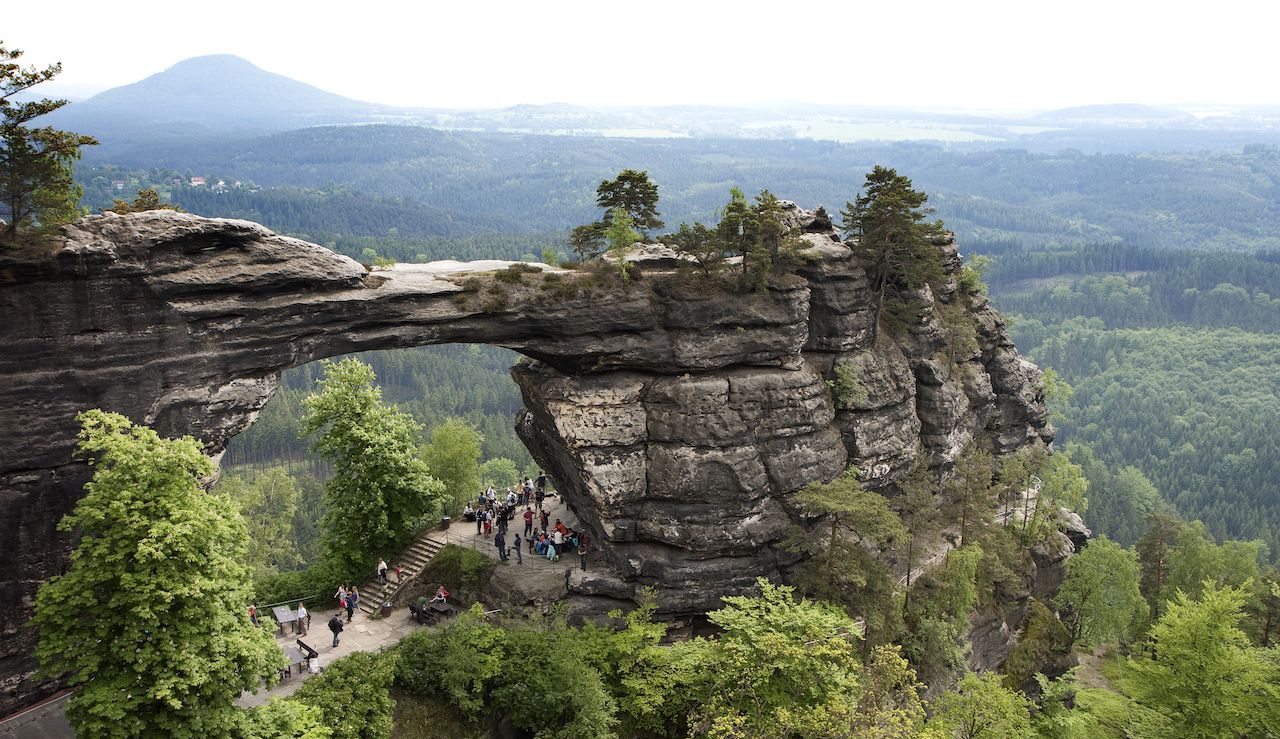 There’s no shortage of natural beauty in Germany, but Saxon Switzerland National Park brings something special to the table. The park is best known for its massive stone monoliths that jut skyward throughout the forests. These towering columns are made of sandstone and have been weathered by the elements since the Cretaceous Period. They create a playground for hikers, with deep canyons and caverns for those at their base and incredible lookout points for those on top. No other nature park in Europe has landforms like these.

Beyond the monoliths, Saxon Switzerland is a grab-bag of terrains. While on the trail, you’ll explore forests, lakes, rivers, waterfalls, valleys, cliffs, slot canyons, and caves. If you’re hiking there for the first time, sudden changes in the landscape can take you by surprise. You never know what might be around the next corner, making it an exciting place to hike.

Trails are many, and tourists are few. 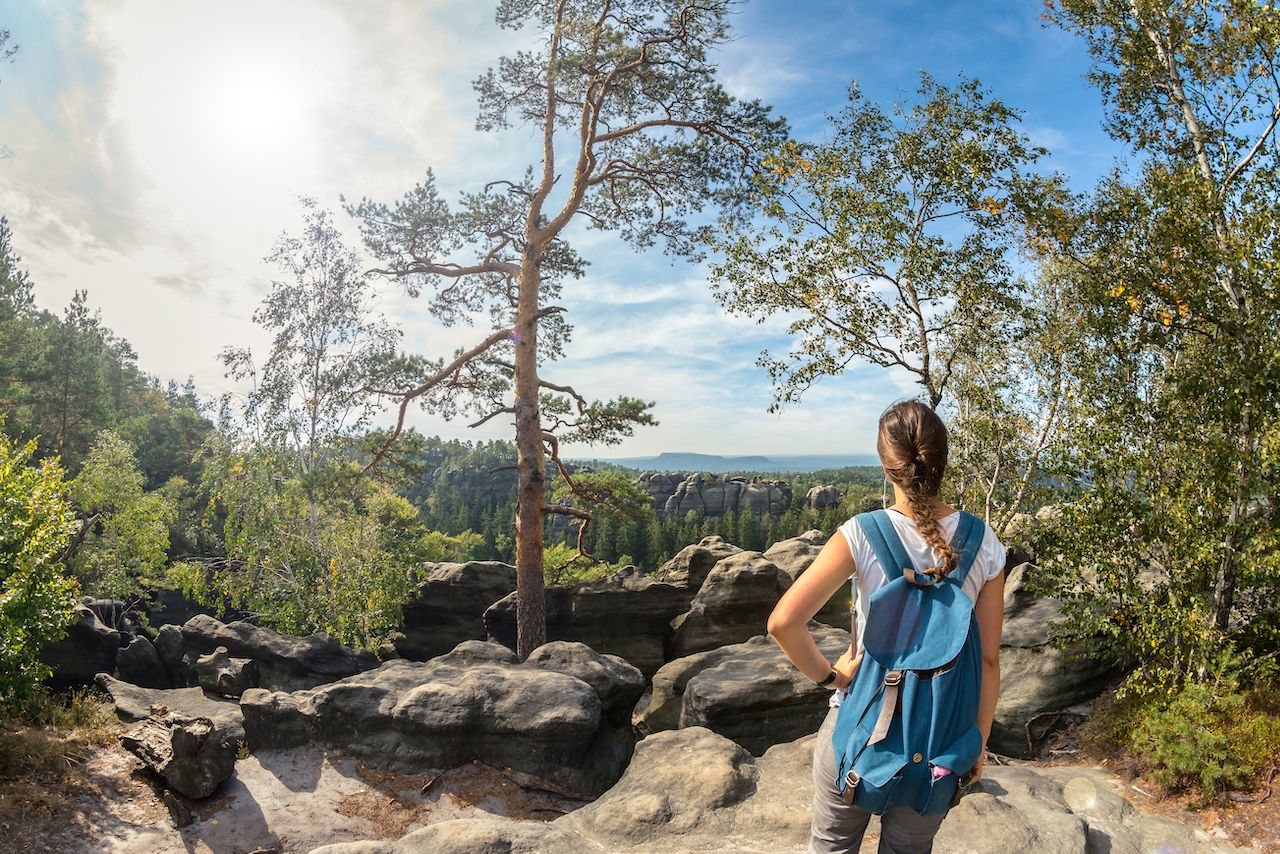 While Saxon Switzerland isn’t completely undiscovered by tourists, they seem to be quite selective about the areas they explore. Within the park, there are a handful of better-known tourist attractions, including the Bastei Bridge, Königstein Fortress, and the remains of Neurathen Castle. Visitors tend to congregate around these sites, and while they’re definitely worth a visit, they pale in comparison to Saxon Switzerland’s real highlights: the hiking trails.

With over 620 miles of trails included in the park’s network, it’s not uncommon to have the path all to yourself. Some of the more popular routes have tight, enclosed areas at the summit that you’ll likely have to share with others, but that’s about as crowded as it gets. Especially on longer and more difficult hikes, there’s a good chance you’ll be discovering the best of the park without having to share it with anyone else.

The diversity of hiking trails is staggering. 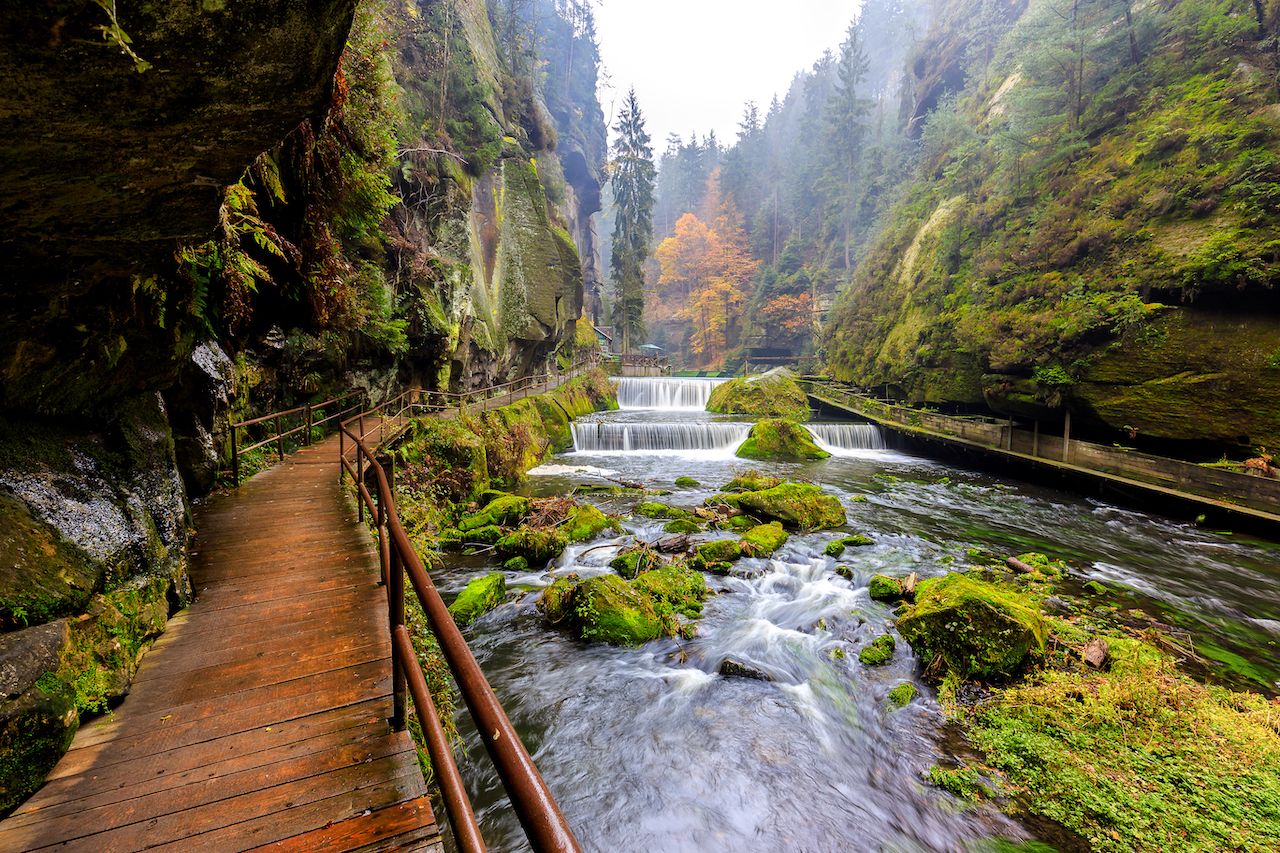 Whether you’re a brand new hiker or a seasoned pro, Saxon Switzerland has something for everyone. Some trails are as simple as wide, flat paths through lovely wooded areas. On other trails, you’ll have steep, narrow ascents involving stairs, ladders, and footholds. You can find everything from leisurely 30-minute strolls to strenuous, multi-day treks inside the park.

The good news is that no matter which route you decide to take, nearly all of Saxon Switzerland’s hikes will reward your efforts with marvelous views. Your preference and level of experience in the outdoors are essentially irrelevant here, and you’re all but guaranteed a good hike.

It’s a paradise for mountain bikers and rock climbers, as well. 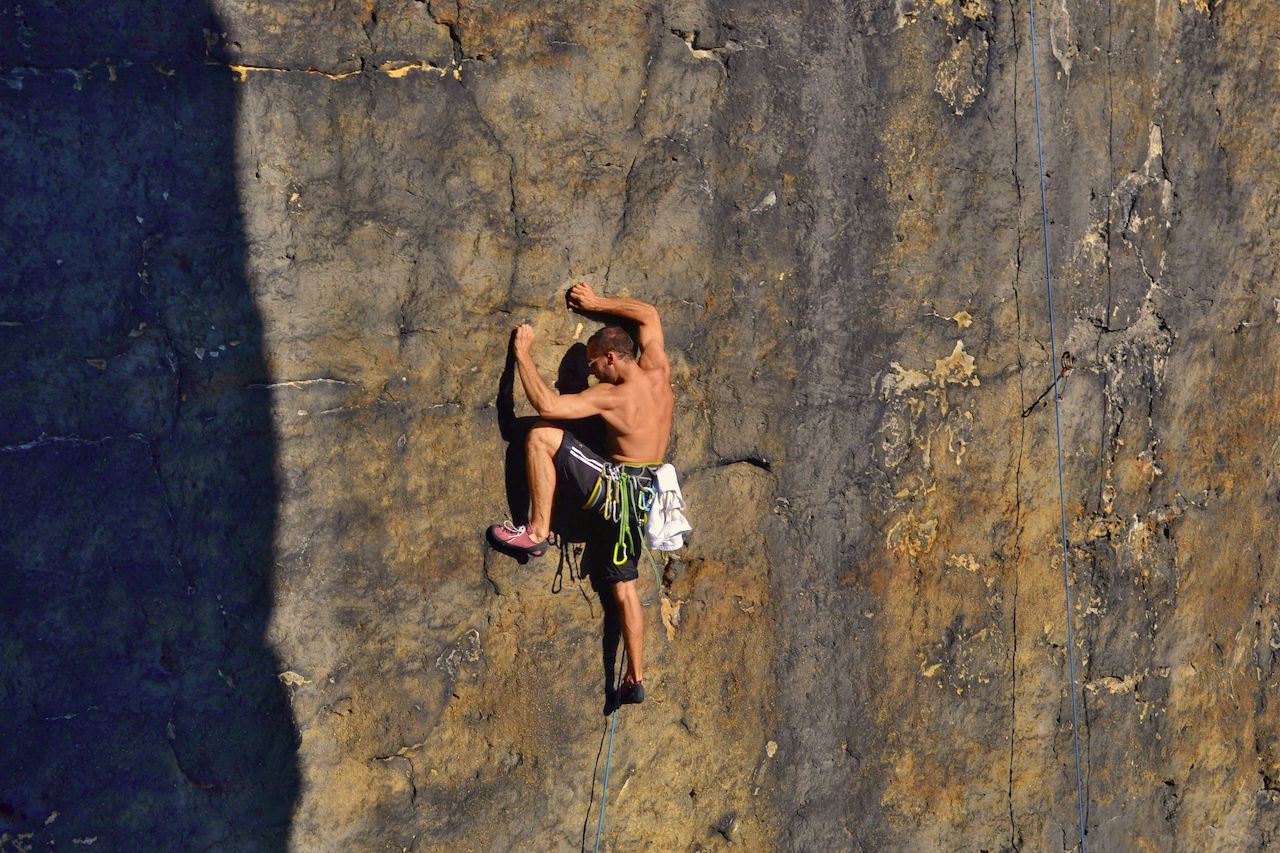 Beyond hiking trails, there are cycling routes with over 30 miles of tracks open to mountain bikers. You can also rent mountain bikes in the nearby towns and even organize a mountain biking tour. Hotels and other stores also rent cruiser bikes to explore the area.

With over 1,100 free-standing rocks and a network of 17,000 climbing routes, bouldering and rock climbing enthusiasts will never run out of places to explore. If you were to somehow exhaust all of your hiking, biking, and climbing options inside Saxon Switzerland, you could simply cross the border and explore Bohemian Switzerland, the park’s Czech counterpart. 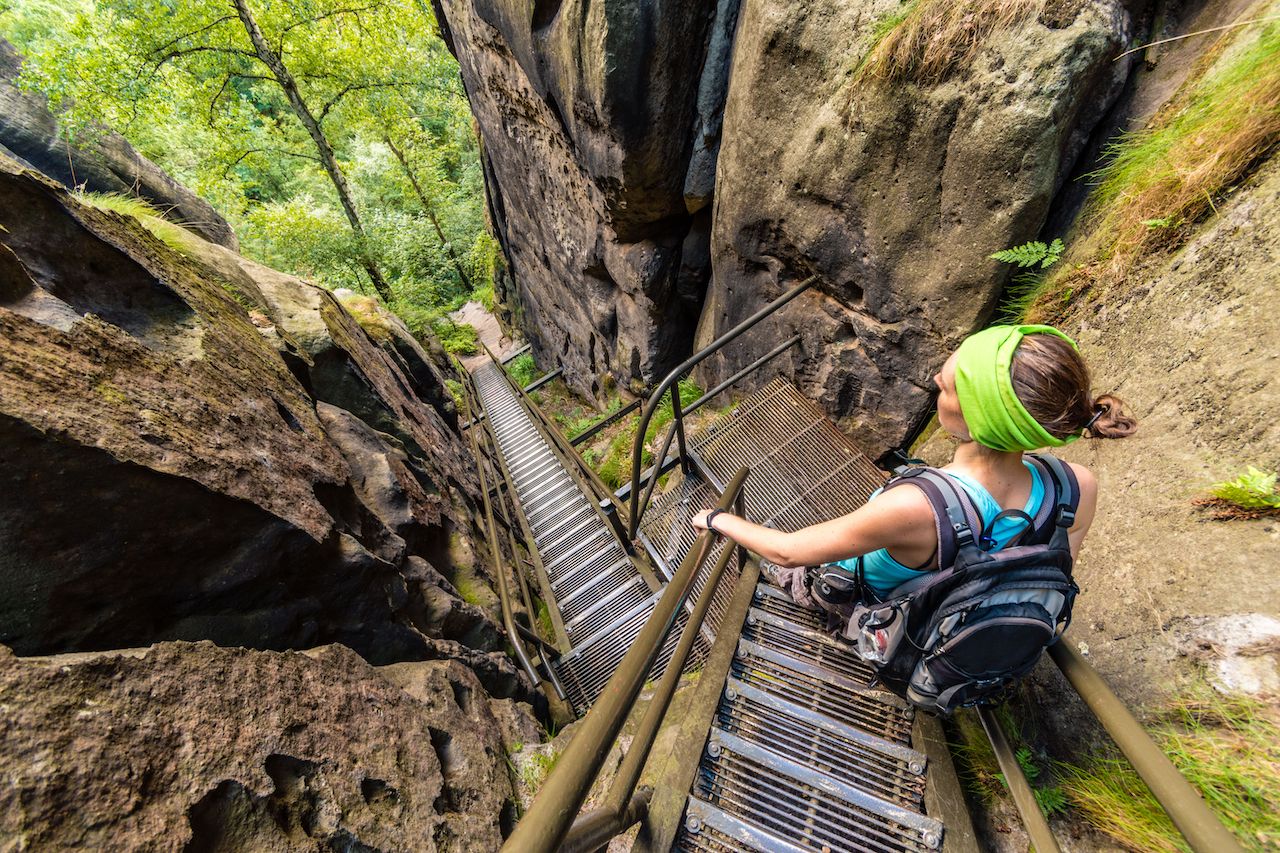 One of the best things about Saxon Switzerland National Park is its ability to feel peacefully remote while being easily accessible from a number of major cities. The park is only an hour away from Dresden and is also easy to reach from Berlin (a three-hour drive), Leipzig, and Prague. Driving in is straightforward, as is taking the train. In addition, the park’s towns have an interconnected, eco-friendly public transport system.

The park has no official entry points and no entrance fee, making it even more accessible to visitors. You can approach it from any direction and don’t need to go far before you’ll arrive at your first trailhead or point of interest.

The nearby towns are peaceful and picturesque. 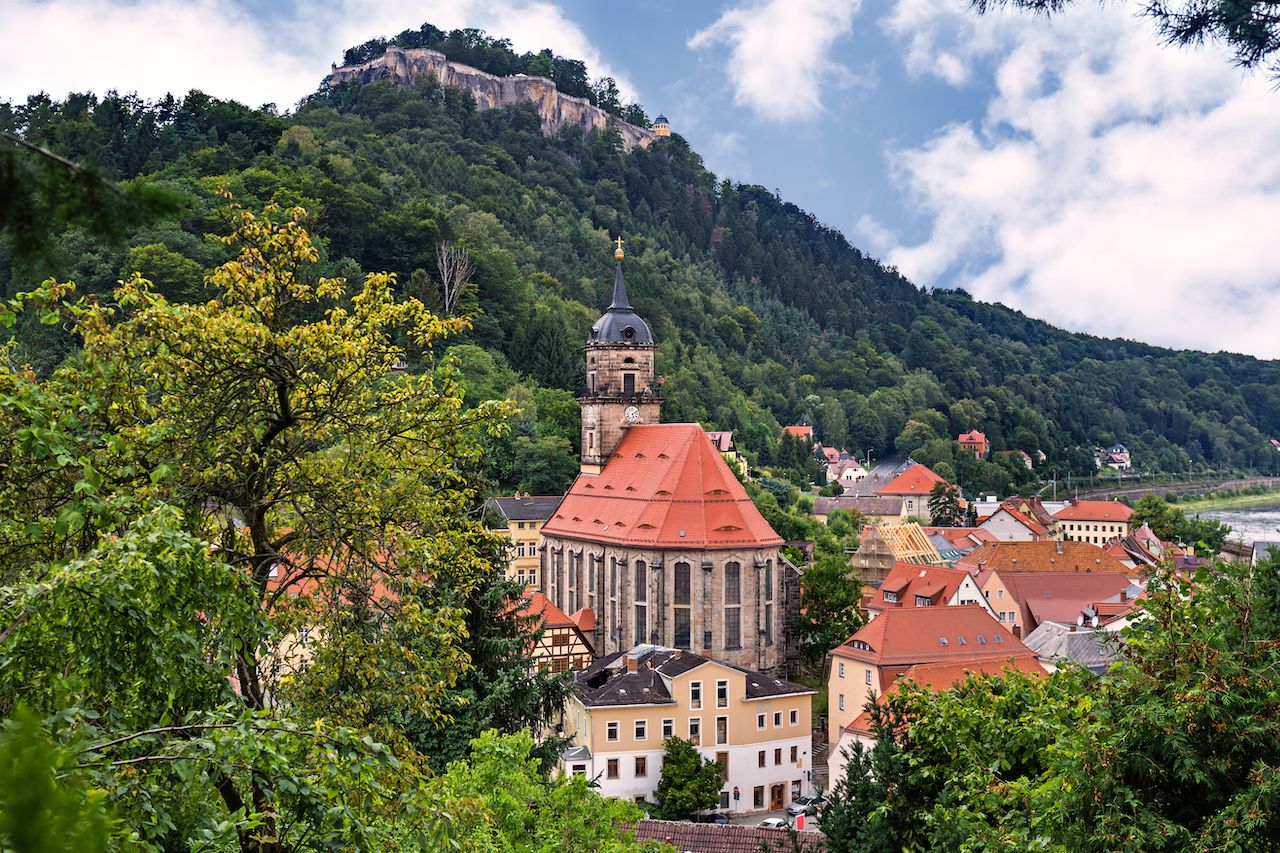 Once you arrive, you’ll feel like you’ve stepped back in time to a simpler, more tranquil era. Restaurants, stores, and homes are adorned with dark timbers typical of old German architecture. In sleepy towns such as Rathen, Königstein, or Bad Schandau, the pace of life seems to slow down, creating the perfect relaxing atmosphere to enjoy between hikes. Even better, the nearest trailheads are often only a quick walk or drive away. 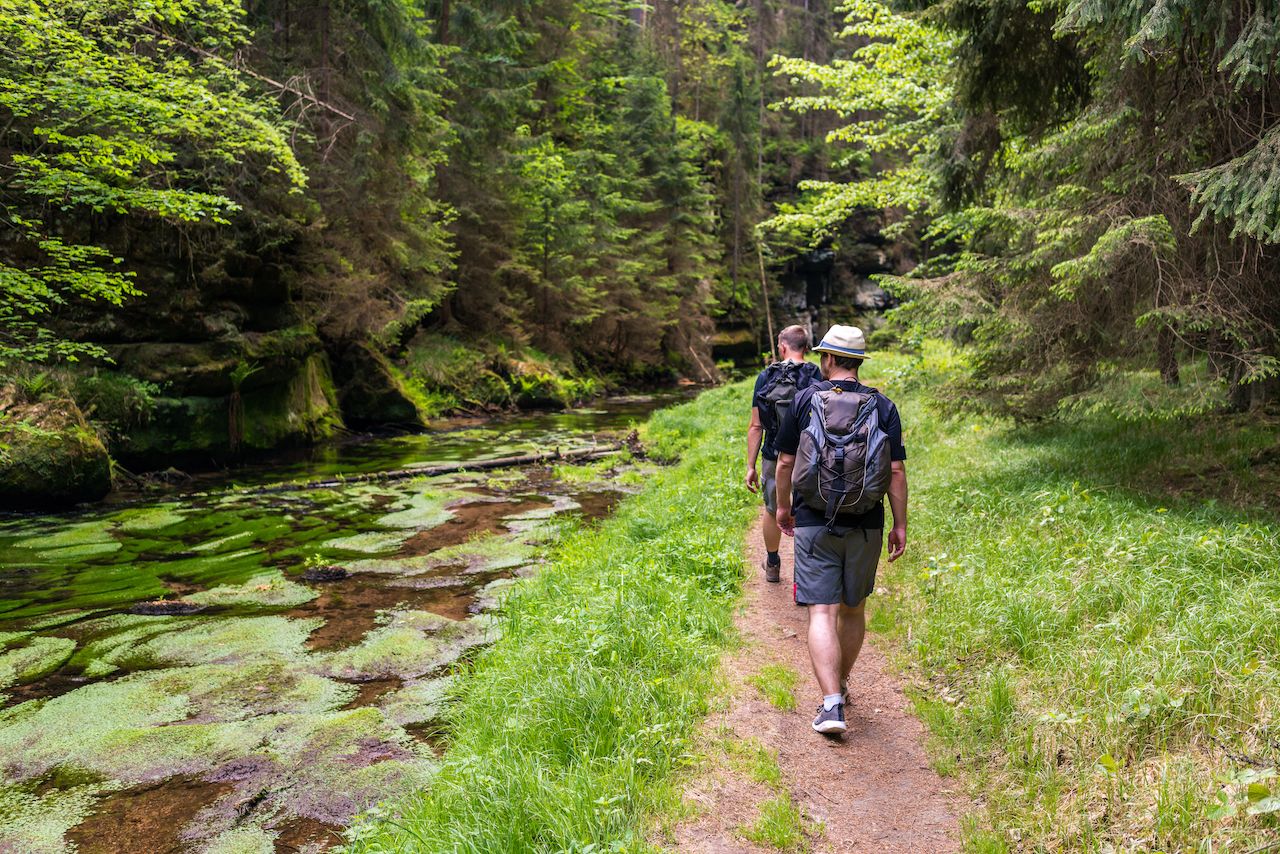 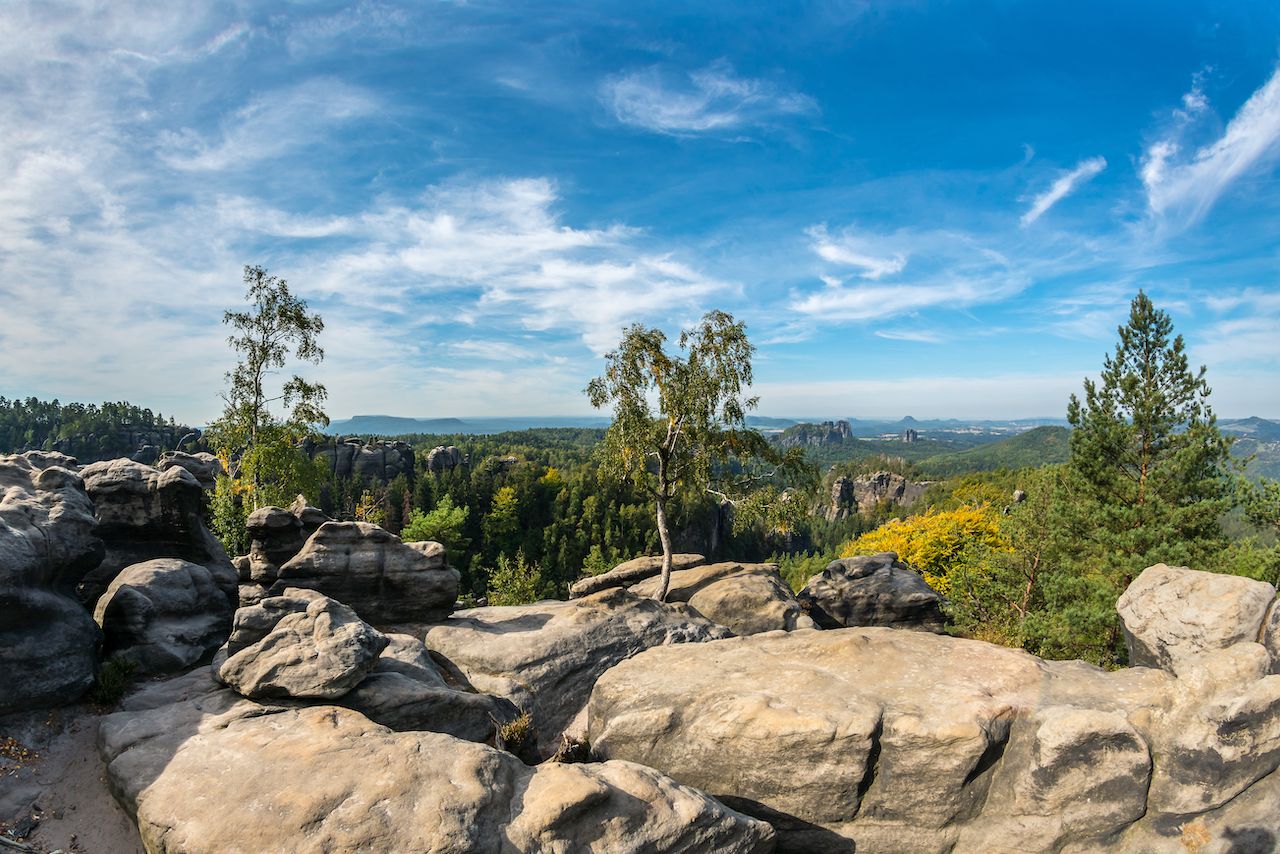 If you plan on hiking Schrammsteine, make sure you’re not afraid of heights. After a brief flat section at the beginning, you’ll ascend clanking metal stairs and ladders bolted into the rock to reach the precarious lookout point at the top. Being the tallest landform in the immediate area, Schrammsteine will allow you to see miles and miles of the Elbe River, as well as jade-green forests, rolling hills, and more monoliths in all directions. 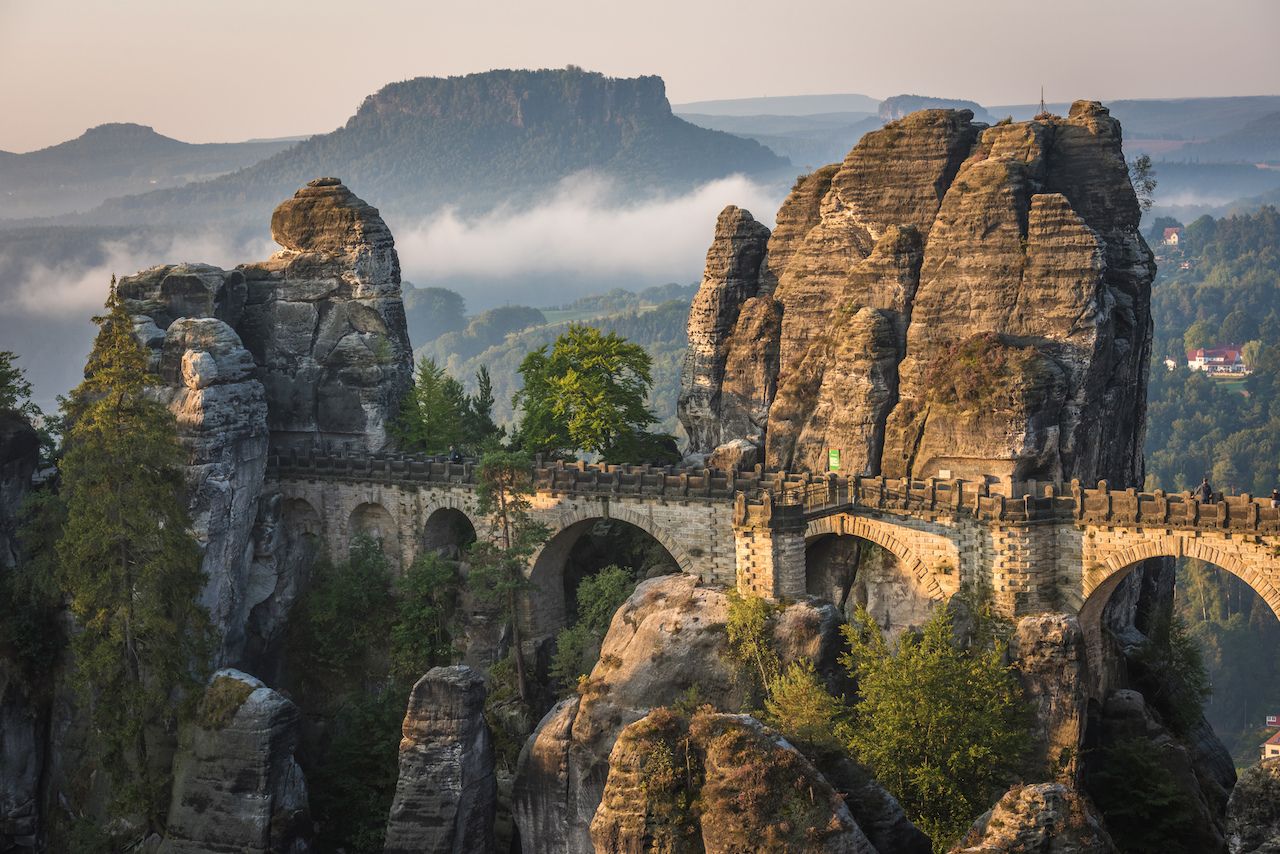 Although one of the most touristy areas in the park, the Bastei Bridge is a must-visit. On your hike, you’ll pass through the remains of an old castle and its abandoned stables to cross the Bastei Bridge on foot. While there, make sure to hike the little offshoot trails in the surrounding area for panoramic views of the bridge. The Swedish Holes — narrow slot canyons enveloped by moss and tiny, trickling waterfalls — are right nearby. For the best experience, hike them from high to low elevation and stop to enjoy the earthy smells and muffled sounds as you go. 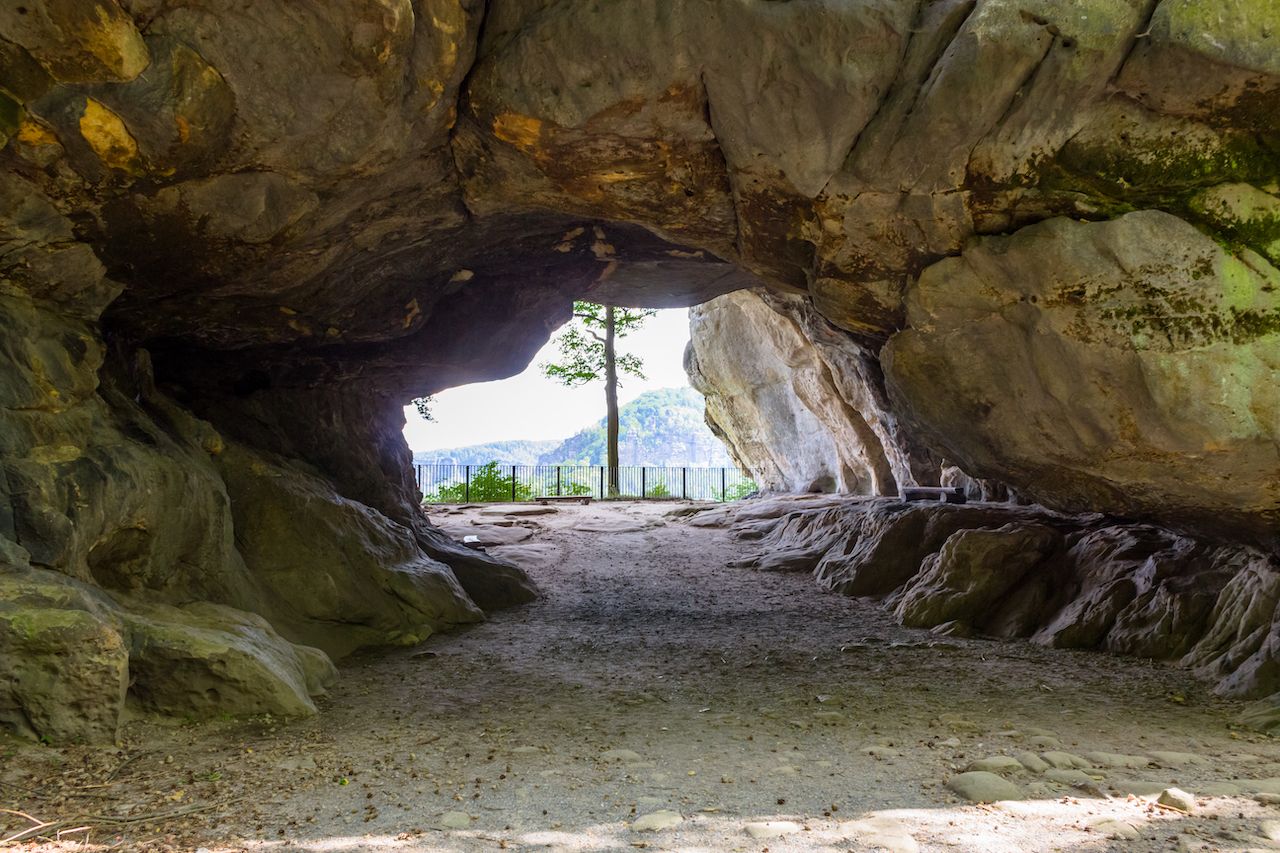 Himmelsleiter is one of Saxon Switzerland’s best full-day hikes. You’ll squeeze through slot canyons and tiptoe along cliff edges to the trail’s summit, Schneiderloch, for views that stretch as far as the Czech Republic. Along the way, you’ll cross waterfalls, scurry through caves and archways, and give your legs a workout on an endless set of narrow stairs right before the summit. The highlight of this route is Kuhstall, the park’s largest cave. 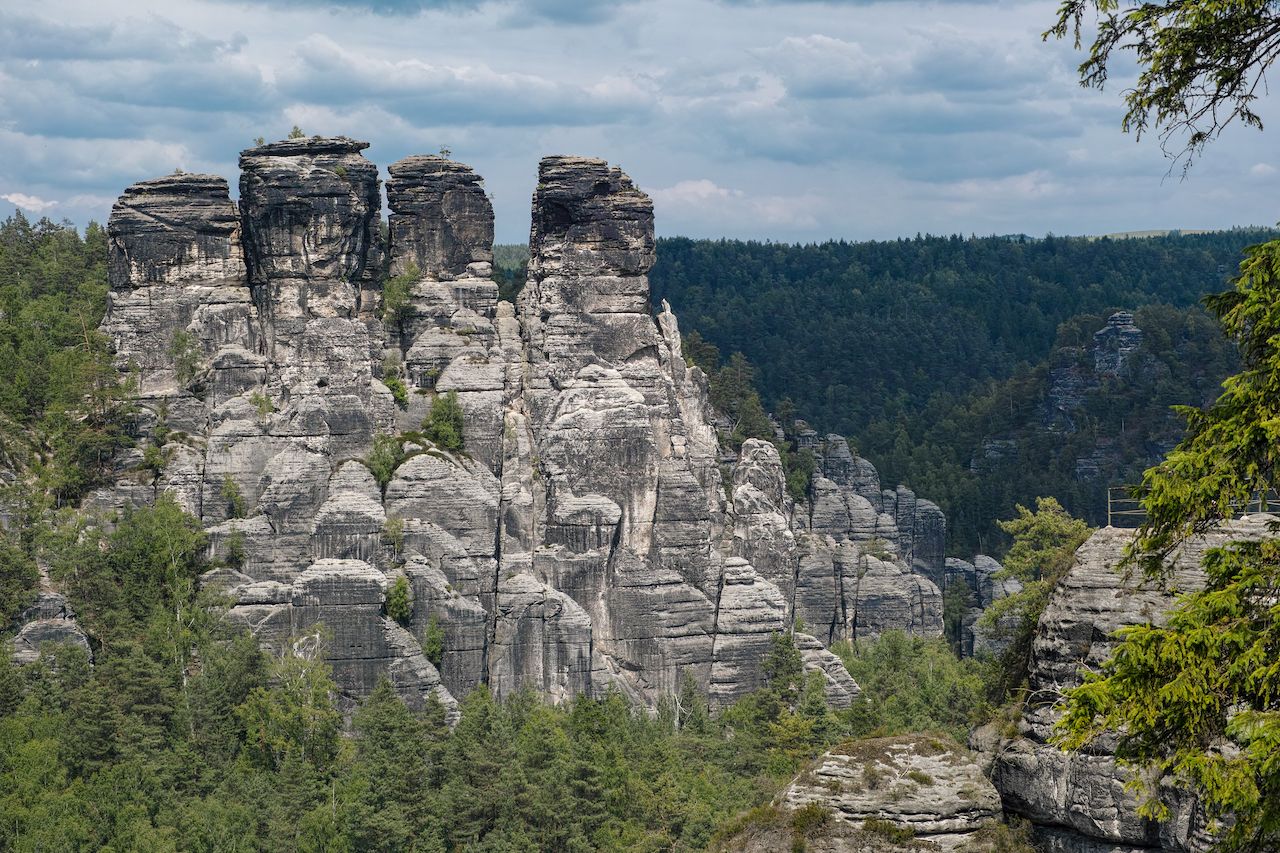 If you want to complete a long-distance hike in Saxon Switzerland, hike the Malerweg, which means “painter’s path” in German. The name of this trail references the same two Swiss explorers who named the park, as they also happened to be artists. The route will take you through all the most adventurous and unexplored corners of the park. While the trek takes more than a week, the route is broken up into eight legs — so completing just one or a few of the sections of the Malerweg is also an option.

National ParksWhy the Alps You Need To Visit Are Actually in Eastern Europe
Tagged
Climbing Hiking National Parks Germany
What did you think of this story?
Meh
Good
Awesome

4 Travel Itineraries for Sampling the Best Food in Germany

11 of the Best Airbnbs in Berlin

Uncovering German History: 5 Travel Routes That Take You Back in Time