With its looming 18th-century buildings, narrow, twisting streets, and bloody past, the Old Town of Edinburgh has long been considered a place where history, with all its ghosts and hauntings, stalks today’s streets. From old brothels to prisons, witch-burnings, body snatchers, and a book made from skin, the streets of Edinburgh are filled with the macabre and sordid. With a bit of planning and research, you too can see all the spookiest, seediest sites and peek into the history behind Scotland’s capital.

These are the scariest places in Edinburgh that you can visit. 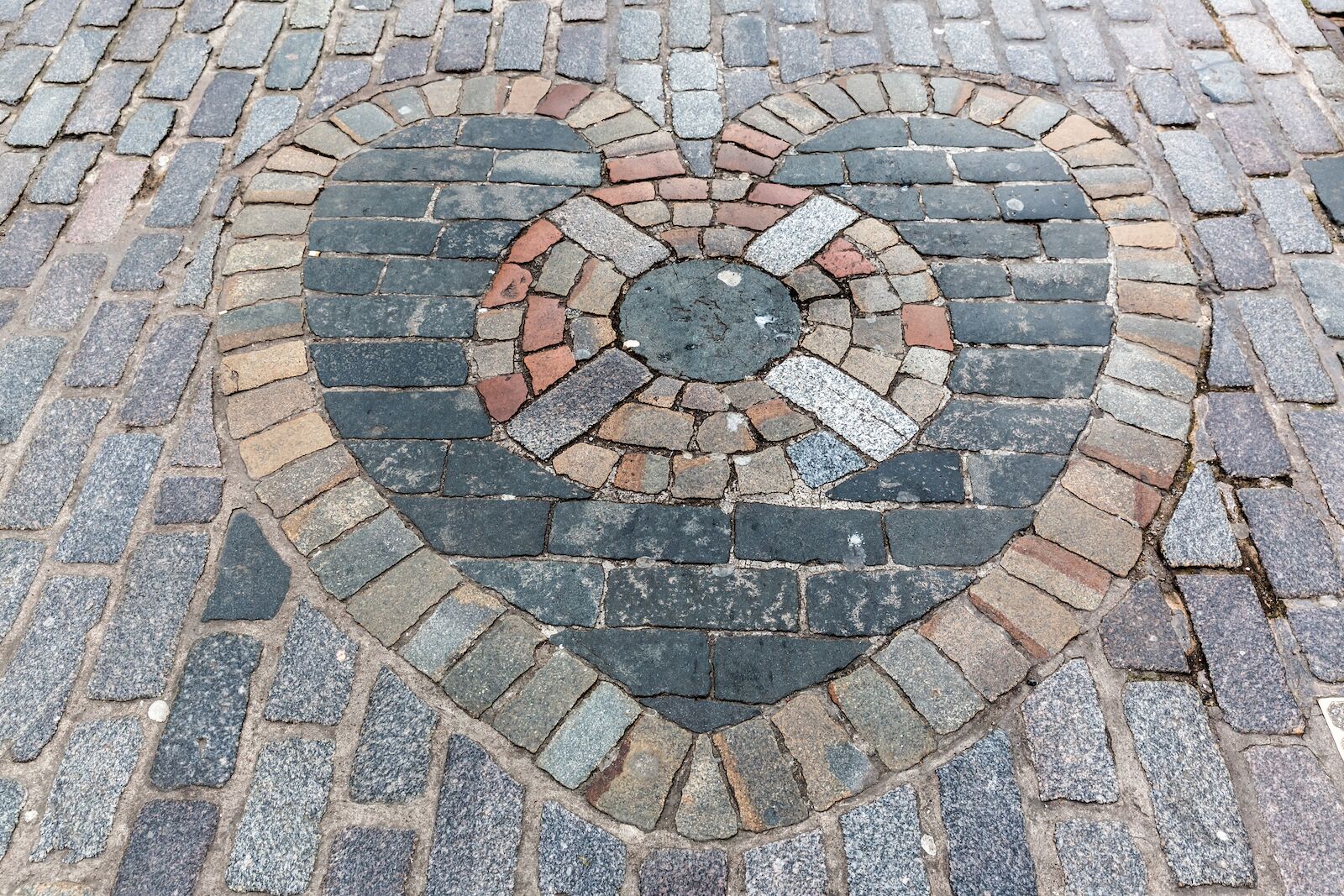 Starting in the 1400s, the Old Tolbooth on High Street served as Edinburgh’s prison for 400 years. Renowned for its horrific conditions, the Old Tolbooth was a squalid, filthy prison that kept children as young as 12. It was also the site of judicial torture, and executions were carried out on top of a two-story addition, providing a stage for the public to see the hangings. Spikes ringing the gables of the Old Tolbooth displayed the dismembered body parts of executed prisoners, with several heads of Scottish nobility making the rounds in the sixteenth and seventeenth centuries. Deacon Brodie, the infamous cabinet-maker and thief who now has a tavern named after him just up the street from the site of the Old Tolbooth, met his end on this platform.

While the prison was demolished in 1817, you can still find its outline near St. Giles Cathedral, marked by brass bricks set in the cobblestones on each of the four corners. A mosaic granite heart marks where the entrance was. Locals hold that it’s good luck to spit on the heart, though it likely started as a rude gesture against the cruelties of the prison.

Where: The outline of the Old Tolbooth and the Heart of Midlothian Mosaic can be found at 197 High Street, just west of St. Giles’ Cathedral, by Parliament Square on the Royal Mile. 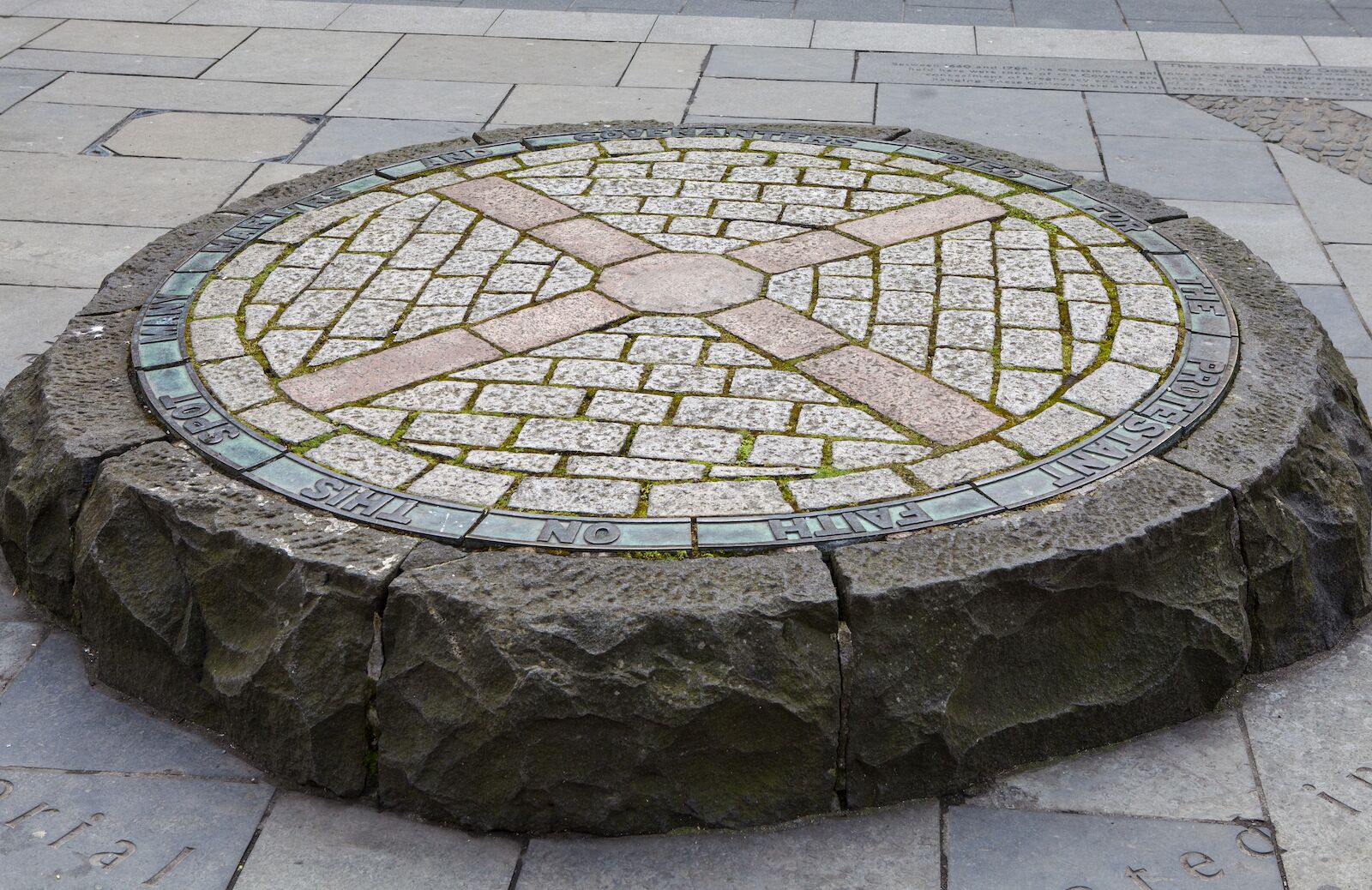 Now a lively square filled with shops and taverns, Grassmarket was once the traditional site of public executions before Old Tolbooth took over the dubious honor. Between 1661 and 1668 alone, over a hundred Covenanters, supporters of a Presbyterian Church of Scotland, were hanged there.

Grassmarket was also the site of the 1736 Porteous Riots. Two convicted smugglers who’d been held at Old Tolbooth were publicly hanged in Grassmarket. When a sailor ran forward to cut down one of the bodies, Captain Porteous of the City Guard fired his musket, killing a man behind the sailor, and then ordered his guards to fire into the crowd. Six more people died, and Porteous, the hangman, and the guards retreated from the mob to the guardhouse, where they continued to shoot into the crowd.

Porteous was arrested, imprisoned in the Old Tolbooth for murder, and sentenced to death. When the monarchy postponed his execution, a crowd of four thousand descended on the prison, overpowering the guards and yanking Porteous from his cell. They then dragged him to Grassmarket, beaten and lynched to death. He’s buried today in Greyfriars Kirkyard.

Today, the shadow of a gibbet is outlined in the paving stones on the east end of Grassmarket, accompanied by a memorial to the Covenanters.

Where: The gallows and Covenanter’s Memorial are at 87 Grassmarket Square, on the eastern end of Grassmarket.

Over two million people visit Edinburgh Castle each year, even more visiting the castle esplanade for its views over the city. However, few visitors are aware that this now bustling courtyard was once the site used by the city to burn people at the stake.

While witch hysteria gripped most of Europe in the early modern period, nowhere was it more commonplace than Scotland. Over 4,000 people were accused of witchcraft between the 1500s and 1700s in Scotland, with more innocent people executed than anywhere else. The accused, typically poor people with a knack for herbal remedies or unfortunate enough to get on a neighbor’s wrong side, were never afforded a fair trial and instead were tortured before they were drowned, or strangled, then burned at the stake.

The castle esplanade was the most popular site of burnings in Edinburgh. Upwards of three hundred people were murdered there, including Katharine Oswald, convicted of making a pact with the devil and murdered in 1629, and Jon Neill, a healer accused of transferring diseases to other people and murdered in 1631. The murders continued until 1727 when the last witch in Scotland was burned.

Just inside the esplanade is a small fountain and plaque known as the Witches’ Well, commemorating those murdered. The University of Edinburgh has also created an interactive map showing the residences and execution sites of the accused.

Where: The Witches’ Well can be found on the western wall of the Tartan Weaving Mill, in the esplanade of Edinburgh Castle on Castlehill.

Scariest place in Edinburgh #4: The Nor’ Loch 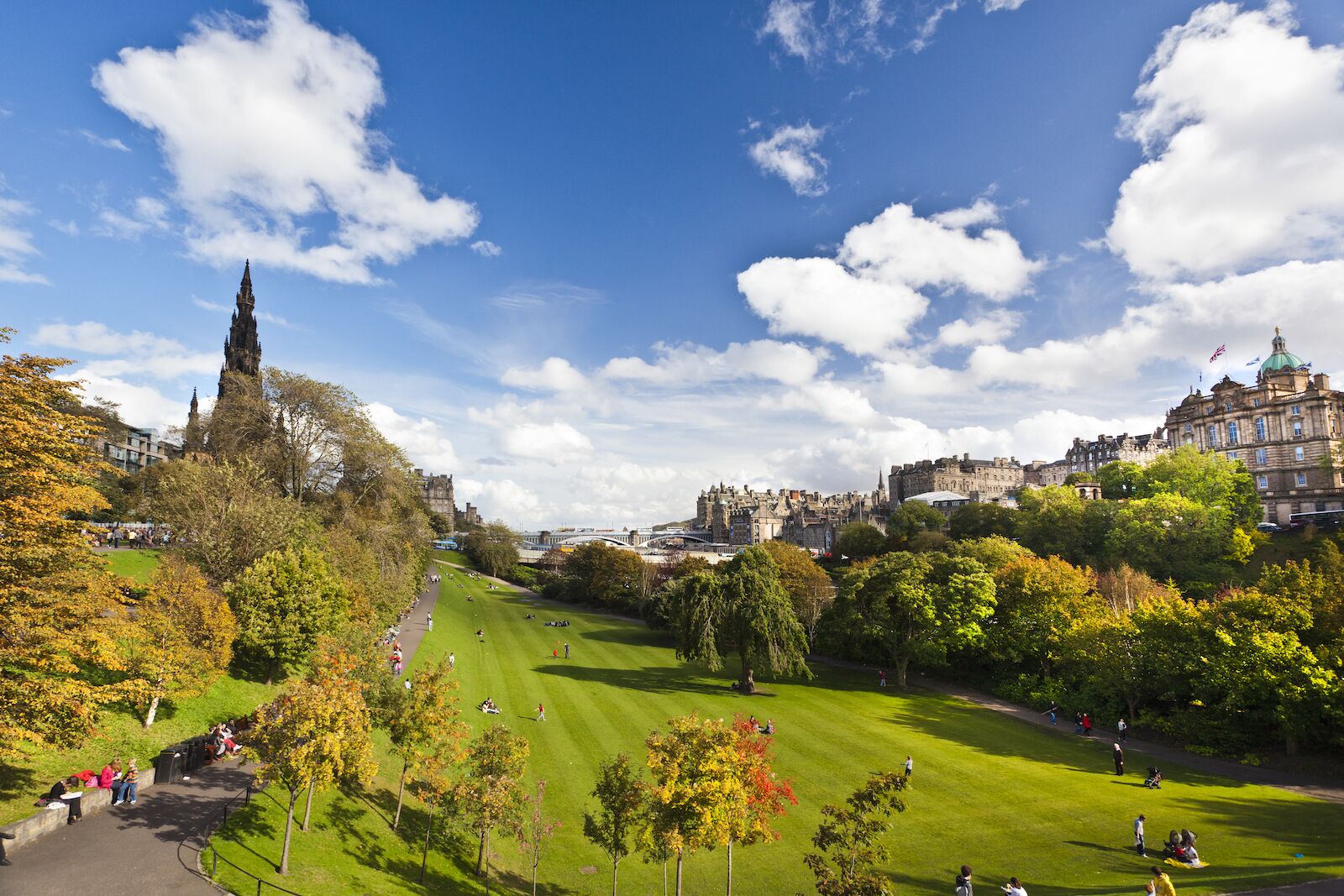 Today, the Princes Street Gardens are beautiful public parks, the site of concerts, and the world-famous Winter Wonderland Christmas Market. However, the Gardens are a relatively recent arrival in Edinburgh’s long history. For centuries, the stretch of land between Old and New Town was a festering, flooded marsh known as the Nor’ Loch.

Initially serving as part of the defense of Edinburgh Castle, the Nor’ Loch was more often used for smuggling and suicides. The loch was also the site of witch dunking, where an accused witch was hogtied and thrown in the water. If they floated, they were a witch and executed. If they drowned, they were innocent, though also very much dead. While no archaeological evidence has been found to support witch dunking in the loch, there are stories of mobs attempting to drown witches there, only to realize the water was too clogged with sewage to get anything to sink, let alone a person. With no sanitation system in the city, people dumped their waste in the streets. When a heavy rain came, it washed the waste down the hill and into the Nor’Loch.

In 1820 workers found a casket on the west end of the drained Loch. Inside the single coffin were three bodies, possibly George Sinclair and his two sisters, found guilty of incest in 1627. Legend has it that Sinclair and his sisters were locked in a large chest with holes drilled in it and thrown in the Nor’ Loch to drown.

Where: The Princes Street Gardens and former Nor’ Loch are located between Old Town and New Town Edinburgh, just west of Waverley Station.

Scariest place in Edinburgh #5: The Brothels of Ranger’s List

In 1775, a guidebook called Ranger’s Impartial List of the Ladies of Pleasure in Edinburgh began making its rounds in town. The book was supposedly written by James Tytler, the first Brit to (successfully) fly a hot air balloon and a writer for Encyclopædia Britannica, who somehow also found time to write early Yelp reviews for the sex workers of Edinburgh. Each entry lists the lady’s name, location, and attributes in a tongue-in-cheek style that likens sex workers to “volunteers of Venus”.

While most of the brothels in Ranger’s List have been destroyed, you can still visit Fountain Close on High Street, home of a Miss Moffat who was “very artful in her amours and almost worn out in the service”, as well as Bakehouse Close, the site of the Museum of Edinburgh, where Miss Hamilton, who had “tolerable good teeth” and was “not unwilling to indulge a friend, when properly applied to” set up shop across from Canongate Kirk. Bakehouse Close is also the site of the 1633 Acheson House, which, while not in Ranger’s List, was a brothel known as the Cock and Strumpet, after the rooster and trumpet coat of arms over the door. The close is also the site of Jamie Fraser’s printshop in the hit franchise, Outlander.

If you’d like to read Ranger’s List for yourself, you can find it online or book a date with a physical copy at the National Library of Scotland in Edinburgh. Gladstone’s Land, a museum in one of Edinburgh’s oldest houses, also hosts an Intimate Lives tour about the history of sex and sex work in Old Town.

Where: Bakehouse Close and the Acheson House can be found next to the Museum of Edinburgh on Canongate on the Royal Mile. 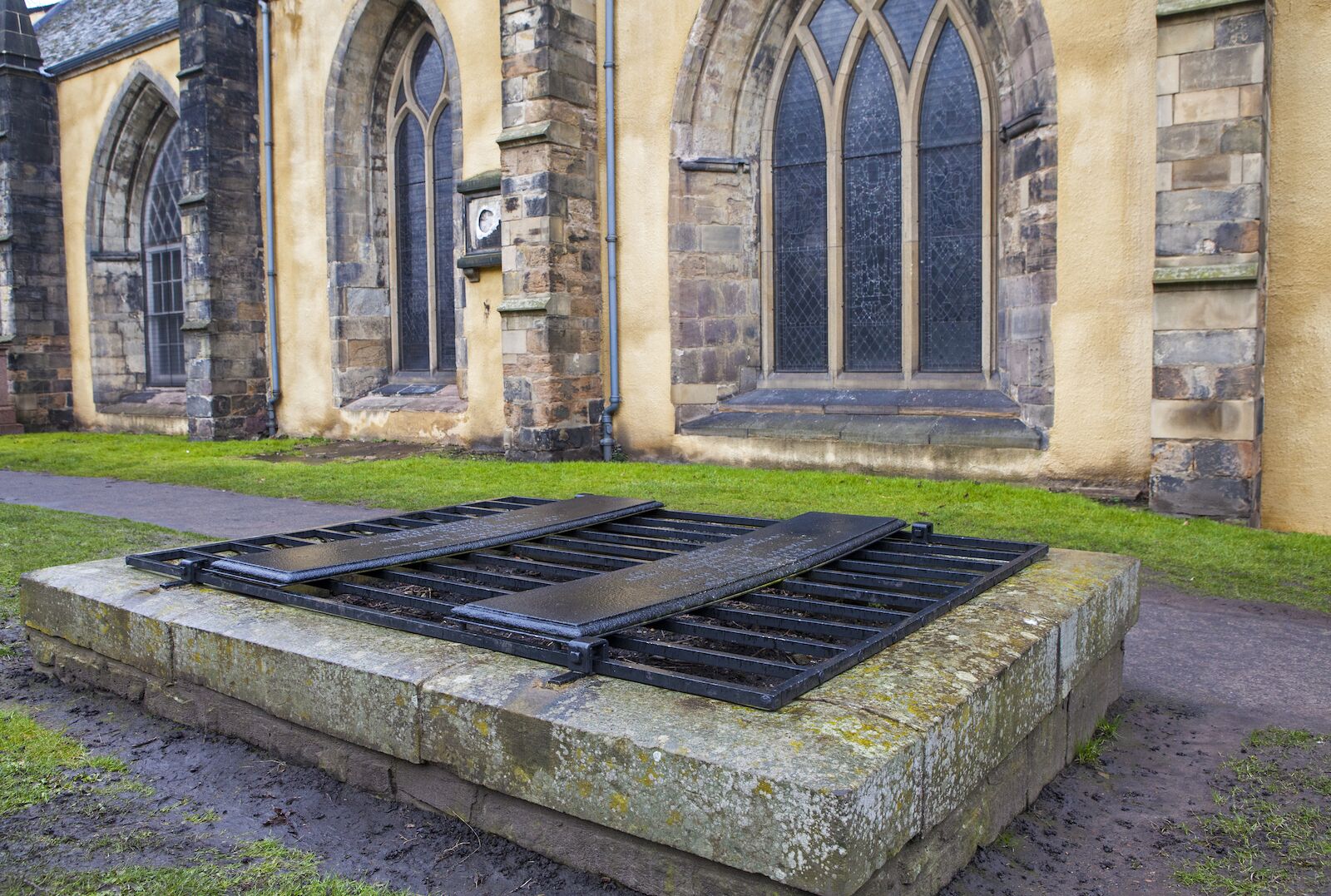 During the seventeenth and eighteenth centuries, the University of Edinburgh was renowned for its medical school, particularly for up-and-coming surgeons. Dissections, vital for the students’ educations, took place in the Old Surgeons’ Hall anatomical theater, built in 1697.

Unfortunately, cadavers were hard to come by. While dissections were vital to the school (and popular with the public), Scottish law only allowed bodies of individuals who had died in prison or committed suicide to be dissected. Because of this, professors constantly struggled to keep up with the demand for dead bodies.
Suppliers turned to the next obvious source: graves. Grave robbing became such an issue that graveyards began posting guards and placing iron cages known as mort-safes over freshly dug graves. Mort-safes can still be seen in Greyfriars Kirkyard.

The notorious William Burke and William Hare decided to skip the grave robbing altogether, and murdered sixteen people, selling the bodies to Professor Robert Knox. The latter dissected the bodies at the Old Surgeons’ Hall. Eventually, the two grave-robbers were caught. While Hare was let go, Burke was executed in front of 25,000 people, his body then publicly dissected in the same anatomy school he supplied bodies to.

In 1832, dissections moved around the corner to Surgeon’s Hall on Nicholson Street, now the Surgeons’ Hall Museum. Inside you’ll find one of the largest pathology museums in the United Kingdom. Open to the public since 1832, the museum began as a “collection of curiosities” and includes skeletons, preserved limbs, examples of various diseases, and…a book made from the skin of William Burke.

Where: The Old Surgeons’ Hall is off Drummond Street in the High School Yards of the University of Edinburgh, while the Surgeons’ Hall Museum is on Nicolson Street.

CultureEverything You Need To Know Before Visiting the Darkest Places in Human History
Tagged
Culture
What did you think of this story?
Meh
Good
Awesome