Early in his latest cookbook, Nik Sharma, James Beard award-nominated recipe developer, food stylist, and the blogger behind A Brown Table, tells a story about watching his grandmother Lucy add vinegar to a pot on the stove, taste the concoction, then add salt. Eventually Sharma developed his own passion for cooking, and realized “her actions were wise and scientific, as sour ingredients tend to minimize the need for salt, because acids help increase our perception of saltiness.” This is the basic principle behind The Flavor Equation: Home cooks can use science to elevate the flavor of their dishes.

According to Sharma, there are six basic elements that constitute the all-important flavor of a dish: emotion, sight (how a dish looks), sound (how it sounds when you eat it), mouthfeel (texture), aroma, and taste. Sharma uses science and chemistry to explain how to manipulate each of these elements, ultimately crafting the final flavor of the dish. Using the tools Sharma provides, you can master fall soup recipes that are balanced and comforting through the coldest days.

For homecooks who might not be used to thinking of themselves as scientists, much of this information might be unfamiliar. But Sharma doesn’t want anyone to feel like they need to become chemistry experts in order to be great homecooks; he’s just giving readers a different set of tools to become problem solvers in the kitchen.

Sharma deftly transforms immutable scientific principles into practical information for the homecook. Tips and tricks are peppered throughout the book: If you want to create interesting pigments for your dishes, adding baking soda to turmeric powder will turn it red (because it’s pH sensitive). Splashing a few drops of lemon juice on yellow carrots will prevent them from turning brown. If you’re making your own bone broth, add vinegar or lemon juice to the mixture while cooking to help dissolve the bones.

“I want people to be able to be independent in the kitchen,” he tells me. “This isn’t about a book about improving your technical skills. I’m not going to teach you how to make the perfect omelet. I hate the word perfect. In this particular book, what I’m trying to tell people is how you achieve flavors in the food you’re making at home, and the basic principles that govern flavor.”

Once Sharma covers the mechanics behind each piece of the flavor equation it’s time to move onto the recipes, which fit into seven categories. The first five are the official tastes that humans can pick up on their tongues: brightness (or sour), bitterness, saltiness, and sweetness. Sharma adds two more: fieriness and richness (which is characterized by fats and oils).

These are the primary ways that Sharma reassures homecooks that they don’t have to be scared of science — it can actually be your biggest ally in the kitchen. And in fact, like his grandmother, whether you realize it or not, you’re using scientific principles in the kitchen every time you cook.

The science of good soup 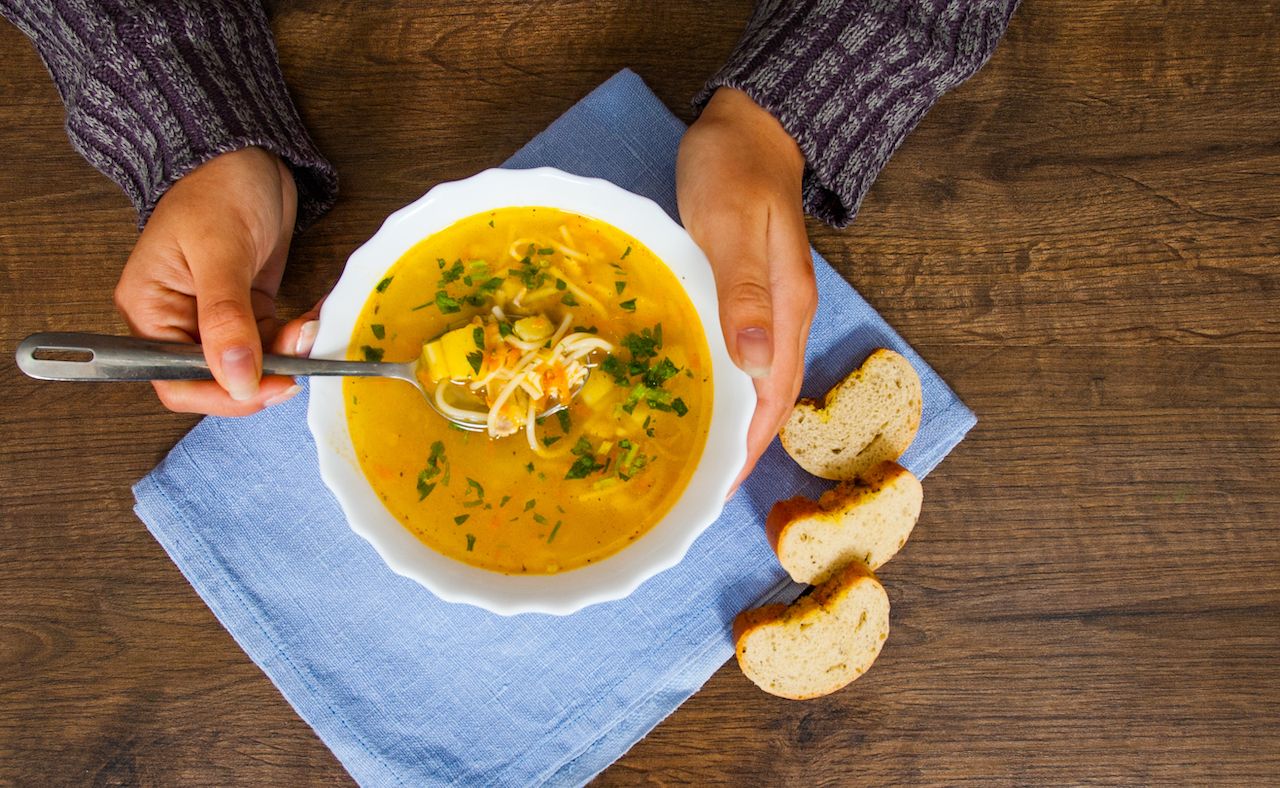 In the fall, homecooks tend to gravitate toward comfort foods. Among the simplest to make and most beloved of these is soup. Sharma’s soup recipes exemplify the kind of warming, satisfying foods that make the colder weather worth it: chickpea and lentil soup spiced with cloves, turmeric, chili powder, cinnamon, and ginger; roasted tomato and tamarind soup that Sharma writes is perfect “on a cold day when you’re feeling a bit under the weather”; and roasted butternut squash soup seasoned by a pomegranate molasses, among others.

Sharma says there are a couple techniques to keep in mind if you want to maximize the flavor of your soup: First of all, feel free to grab your vegetable of choice and throw it in a blender.

“I like roasting vegetables and then blending them, because it does two things,” he explains. “If you’re going with a vegetable that’s sweeter, like a sweet potato, if you roast it at least 14 new molecules are produced by two reactions, [through] caramelization and the Maillard reaction. And then when you blend it at a high speed, it basically adds air into the mixture so fast that you get this emulsion without having to add fat.”

The blender offers another benefit: It achieves with minimal effort the creamy texture that Sharma says he prefers, “when the weather gets cool.” He also gravitates toward tanginess in soups because he feels that this particular aspect of flavor “breaks the monotony of texture.”

“One of the things [about] soup that’s creamy and velvety in texture, there is something called fatigue of texture,” he says. “Adding interesting flavor elements to a dish can turn up an acid. Another thing I like to do is add a spoonful of sichuan peppercorn oil because it’s such a surprise to your mouth. You’re getting that numbing texture and then the heat and the saltiness.”

All of this is achievable without much expertise or professional-level technique. Simple to personalize based on your own flavor preferences, amenable to experimentation, stress-free and easy to whip up in a pinch or under a time crunch — soup might just be the perfect fall food.

“I find them such a beautiful palette because you can keep tweaking and adding something new that’s in your pantry or your refrigerator,” Sharma says. “Even though it’s basically the same key ingredients [every time] you can build on it. You can add crispy French onions, or five slices of garlic. There’s so many fun things you can do [to] take it to the next level.”

Food + DrinkFor the Best Fall Food in the US, Make Your Way To Vermont
Tagged
Books Food + Drink
What did you think of this story?
Meh
Good
Awesome