Palau is an archipelago consisting of over 300 islands in Oceania and one of the best places in the world to go diving. The magnificently turquoise waters are home to countless wonders, whether it’s mineral formations, a historic wreckage, or the thousands of marine species that make it their home. Many of the dive sites are around the Rock Islands, part of Palau’s commercial center in Koror — so most diving will begin as a boat ride out from there.

While Palau is warm year-round, we recommend visiting during the dry season from October to May. Experience levels for diving here range from beginner to advanced, so there’s something for everyone. Here are five places to go diving around Palau. 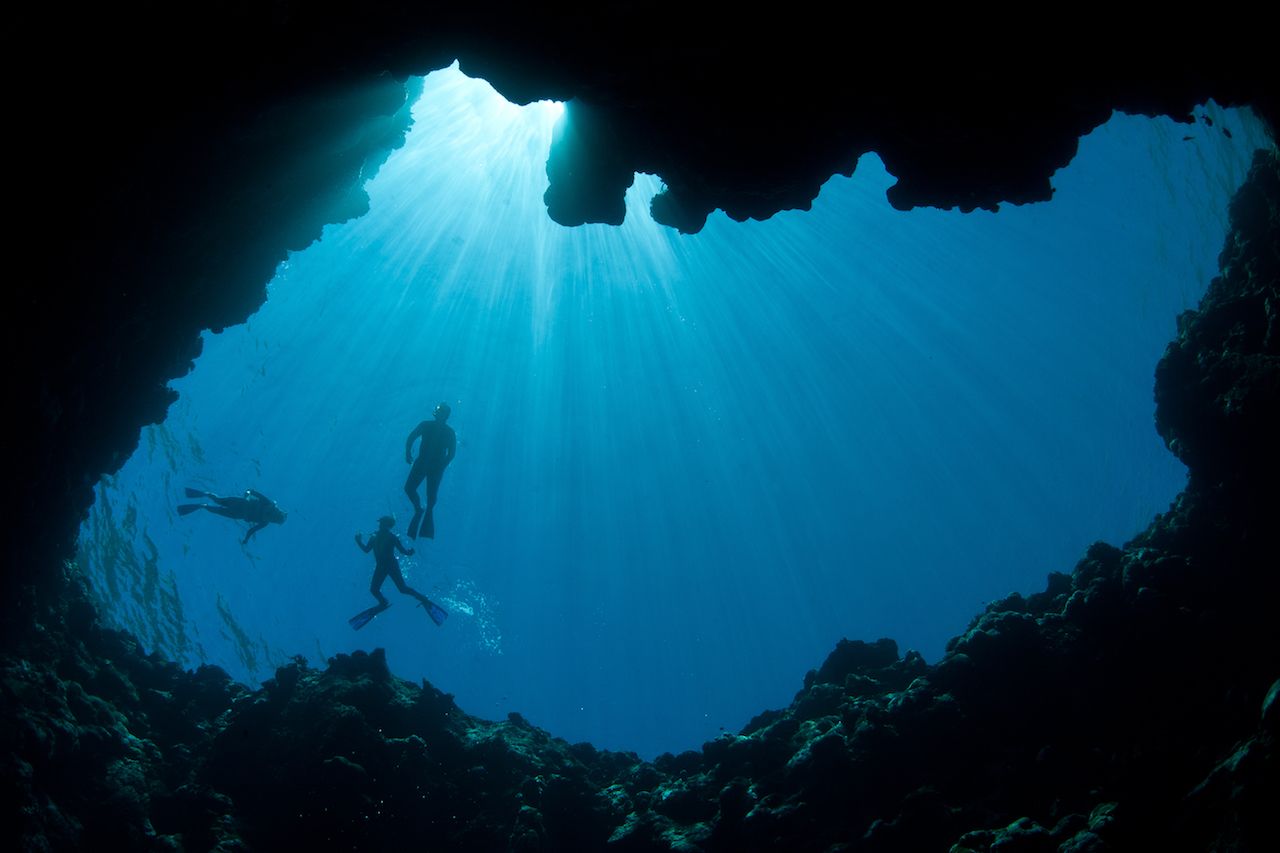 Blue Corner is one of Palau’s most famous and requested dive sites — with good reason. On any given day, you can expect to see soft coral, gorgonian fans, anemones, and numerous varieties of fish including Napoleon wrasse, butterfly fish, eagle rays, and sharks. With a depth range of 25 to over 90 feet, and some of the strongest currents in Palau, it’s best for divers with an intermediate level of experience — but if there aren’t any currents when you visit then you can be at novice level.

The easiest way to access the spot on the northwest end of Ngemelis Island is via boat from the town of Koror, which will take around an hour. You should use a reef hook to buoy yourself to the plummeting reef wall, so that you aren’t overtaken by unpredictable currents and can relax, conserve air, and not scare away the sea life swimming around you. After taking in the active marine life at Blue Corner, the nearby Blue Holes are easily accessible and the next natural step. As the name suggests, the Blue Holes pave the way for a huge underwater cavern from where, when looking up toward the surface, you’ll see the darkness contrasted by unfathomably blue waters. 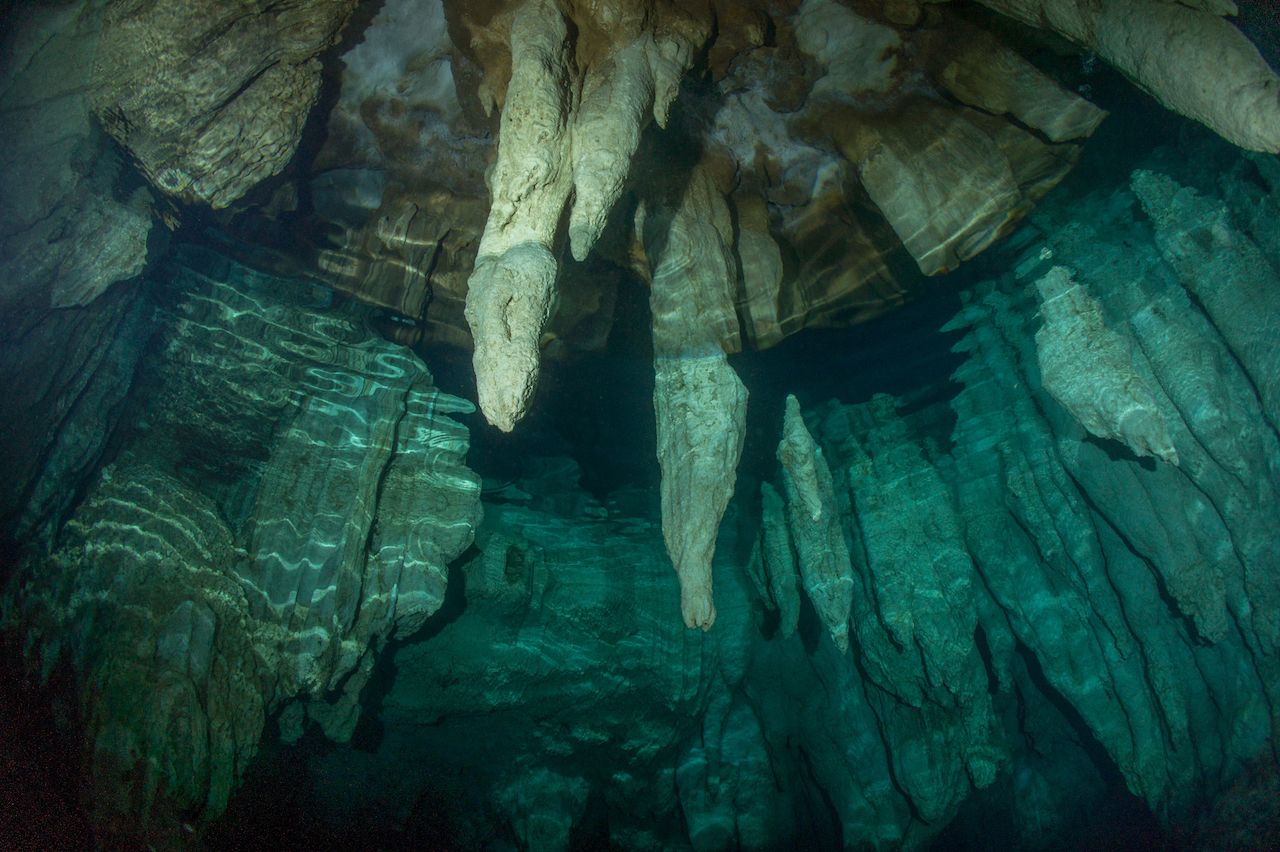 Chandelier Cave provides a diving experience like no other, but it isn’t for the faint of heart. At times, there will be no light or visibility, and the enclosed environment can be bad news for claustrophobes. Connected by a series of tunnels, it encompasses five different caves, each of which has the possibility to surface without the need of a regulator to breathe. You’ll enter the first cave through an opening in a rock island just about 13 feet under the surface and swim to each following cave through the tunnels.

To reach the fifth cave, however, you’ll have to get down and dirty and crawl through some mud. All five caverns are outfitted with an astounding number of captivating mineral formations, such as stalactites and stalagmites, which give Chandelier Cave its name. You might even catch a glimpse of the elusively beautiful, yet poisonous, mandarin fish. 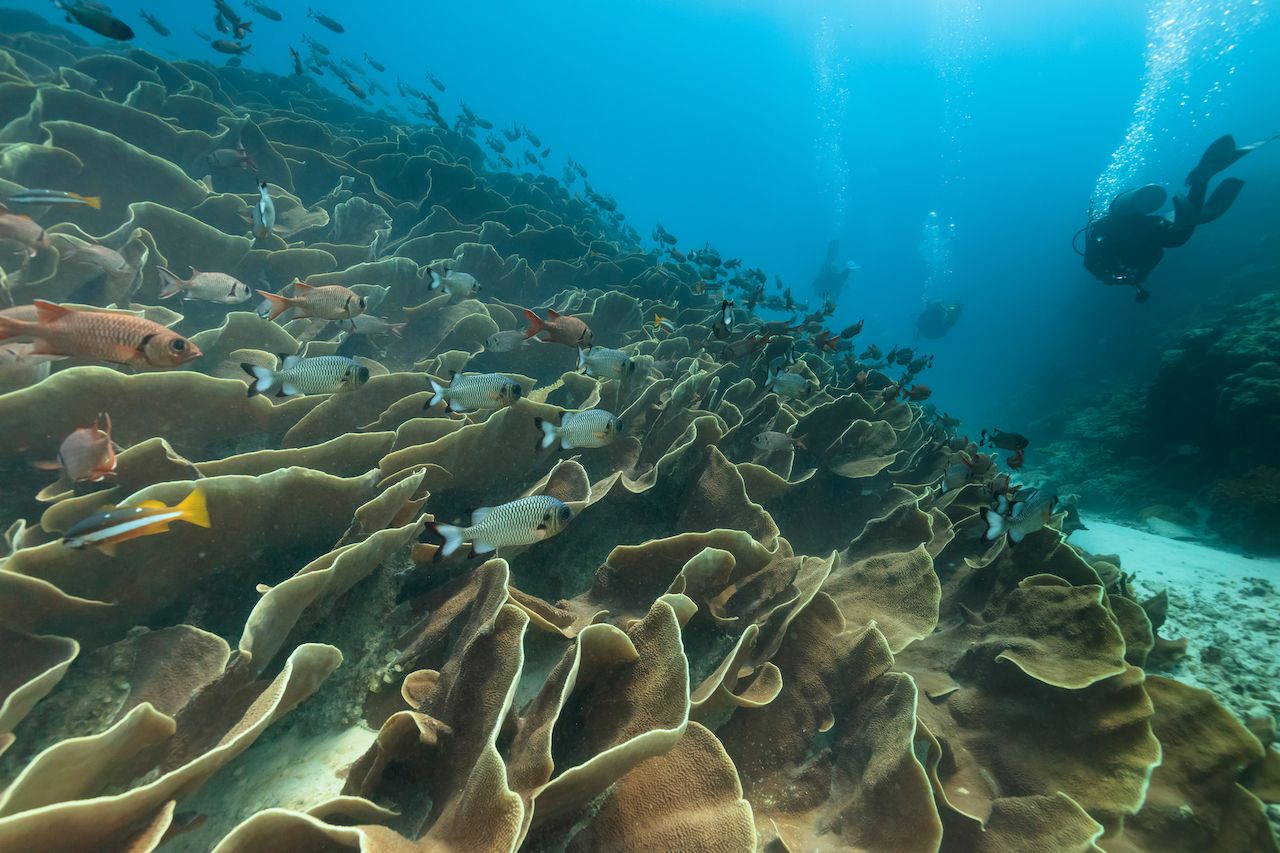 Ulong Channel is for adventurous divers looking for a challenging drift dive. The depth ranges from 16 to 65 feet, and we recommend using your reef hook here. That way, during the incoming tide, you can float among all the schools of fish, take pictures, and be one with the water. The kinds of creatures you’ll encounter here will vary depending on the season, but it’s not uncommon to watch as larger fish, such as grey reef sharks, stalk their prey. One of the best things about the Ulong Channel, though, is the incredibly clear visibility of nearly 100 feet that allows divers to gaze at a seafloor covered in white sand and cabbage-shaped coral formations. 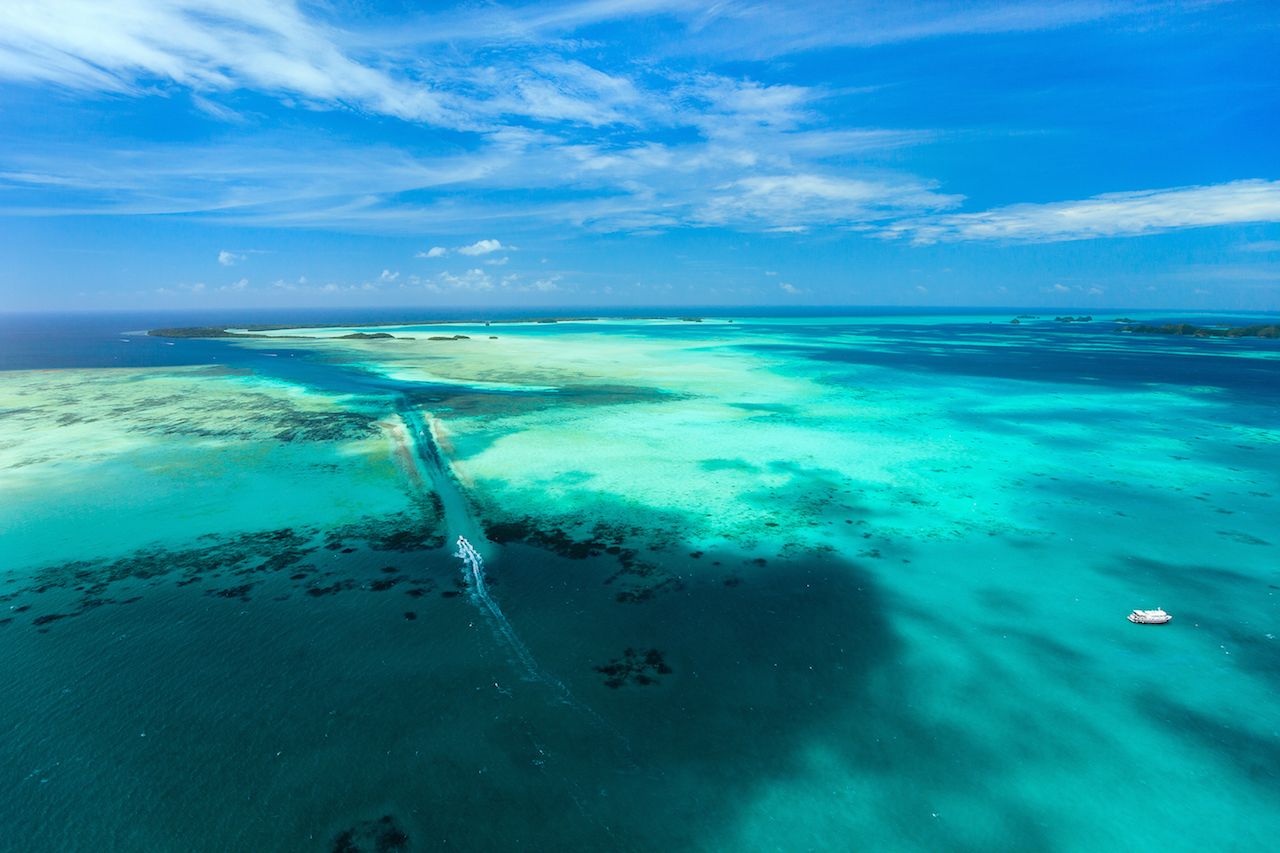 Named after German miners who created the channel in the early-20th century, the German Channel is a diving spot that separates Ngemlis and Ngercheu Islands. The pass has become narrow due to growing coral formations, and the depth ranges from about 19 to nearly 100 feet, but even beginners are able to safely take the plunge here. You’ll be able to see a myriad of marine life, but this site is most famous for the manta rays that commonly appear. They’re even known to curiously approach divers if they don’t feel threatened — so while you may feel excited at the sight of them, stay still and calm, and let them come to you. 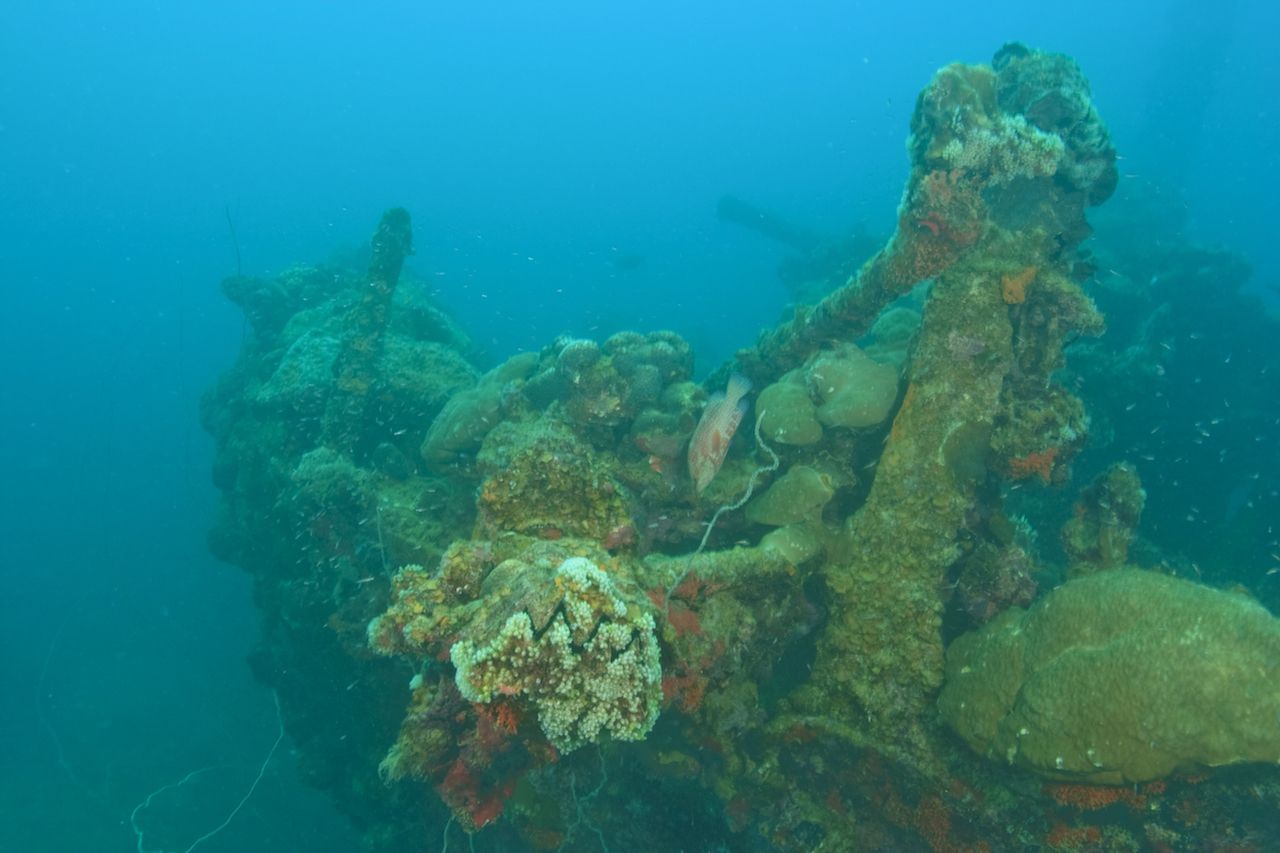 Wreck diving is an increasingly popular form of diving as more and more wreckage is uncovered in the ocean’s depths, providing a window into past eras. Located in the northern Rock Islands, Helmet Wreck is a spot that’ll lead you to some historic World War II wreckage that was discovered in 1990. As there was no identifiable name, the sunken Japanese vessel was given the name Helmet Wreck due to the large number of helmets found. Other wartime artifacts to be found include rifles, ammunition boxes, gas masks, and electrical parts. The ship is about 180 feet long, and the depth here is approximately 50 to 108 feet, with the ship’s bow on the deeper end and the stern on the higher.

DivingHow To Go SCUBA Diving Without Being Certified
Tagged
Beaches and Islands Diving Insider Guides Palau
What did you think of this story?
Meh
Good
Awesome

What To Know Before Swimming in Palau's Jellyfish-Filled Lake

Would You Swim in This Lake Full of Jellyfish?

6 Ways To Get in the Water in Palau