Humans can’t seem to help themselves when a chance to swim with marine animals comes along, which unfortunately has led to a sea wildlife tourism industry dominated by captive creatures forced to perform and interact with curious visitors. As we begin to move away from these experiences, with captive cetacean shows ceasing and circuses ditching their animal acts, it becomes more important than ever to be able to identify organizations that offer ethical wildlife excursions, so that they can be supported.

“[It is clearly unethical] when an animal’s behavior is being changed and when an animal’s health is impacted,” explains Travel for Wildlife’s Cristina Garcia Brindley. Generally, tours that don’t involve feeding, touching, chasing, or interacting at all with an animal are taking the species’ best interests into consideration. Here are seven places you can head to swim with marine wildlife without the weight of guilt sinking you down. Just remember, “These beloved animals are also very powerful and can react if they feel threatened or harassed,” Garcia Brindley advises. “Never put an animal in a situation where it has to defend itself” or you’ll truly get to see just how wild these animals can be. 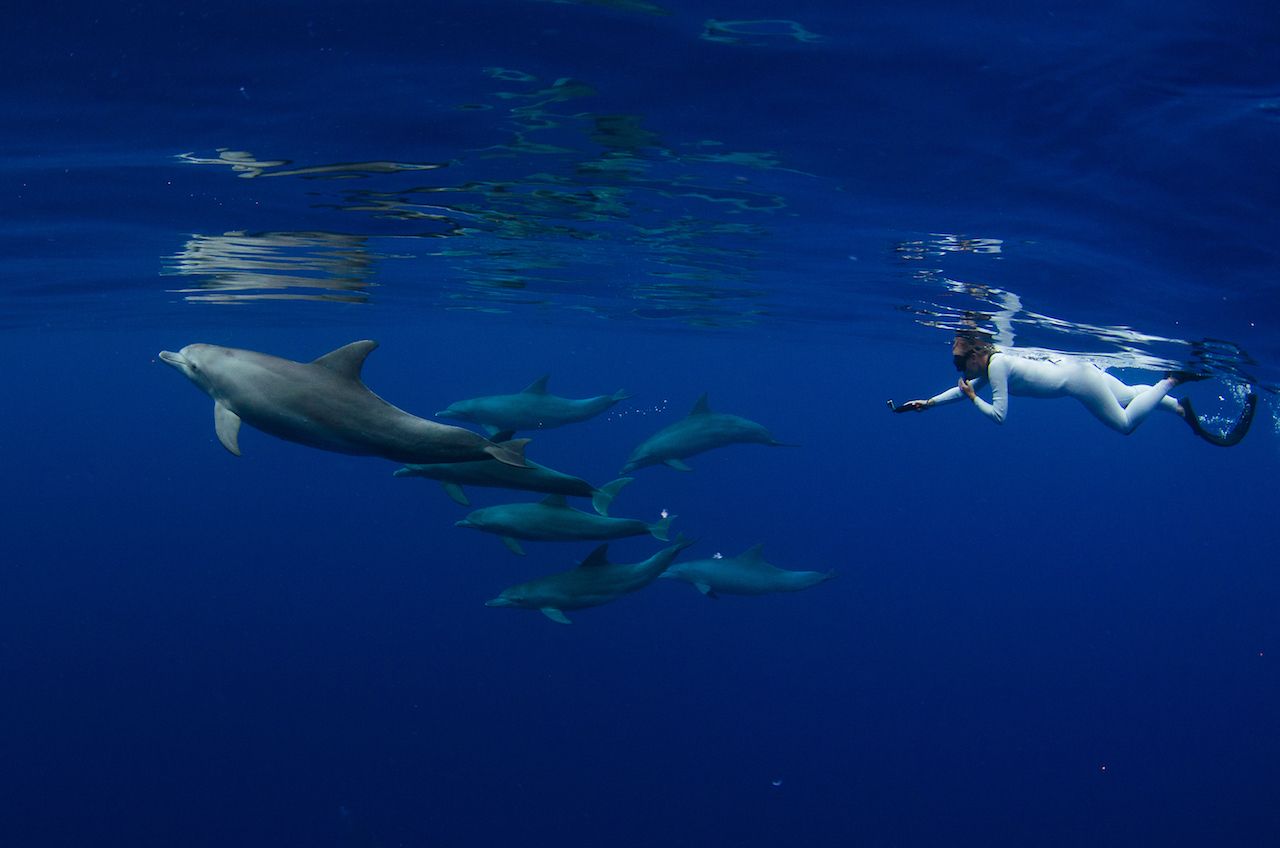 Bottlenose dolphins are perhaps the most well-known of all animals held captive for the entertainment of tourists. They perform in shows, do tricks in circuses, and live out their lives in shallow pools so tourists can strap on a life vest and take a fleeting photo with them.

If you truly love dolphins, the best place to witness their joy is to meet them where they live: in the wild. Off the coast of Adelaide in South Australia, pods of Indo-Pacific bottlenose dolphins explore the cool waters, and getting in the water with them is totally doable (check out Experience Oz’s Dolphin Swim and Cruise for more details). Curious dolphins will come play in the wake of your boat, at which point you can pop in and the animals can decide whether they want to stick around with you or not. This way, it’s entirely up to them how much human time they’re getting. 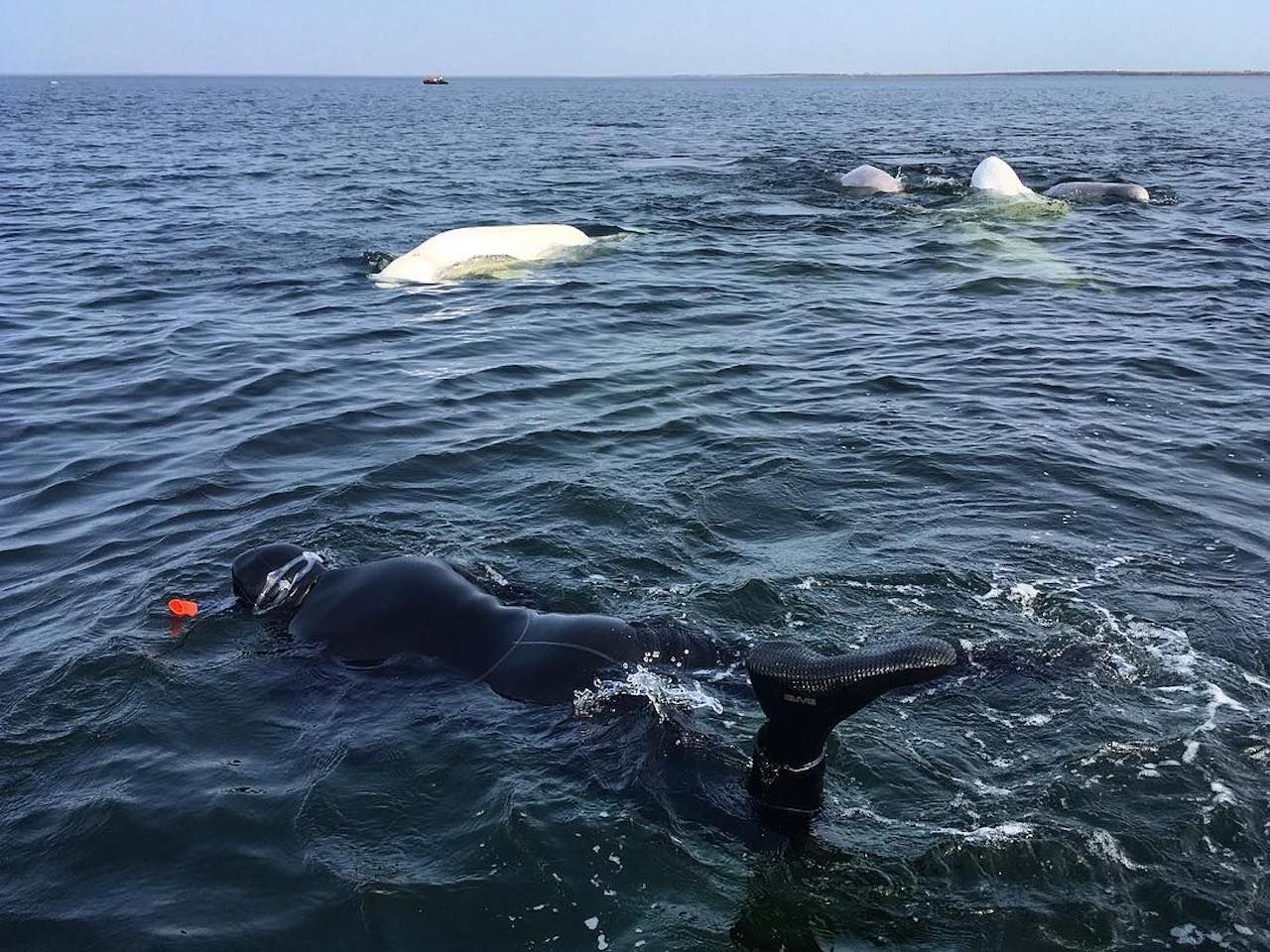 Beluga whales are intriguing with their pearly white color and playful demeanor, and just like their distant cousin, the bottlenose dolphin, this Arctic cetacean will inspect boats and curiously get to know the humans that swim in the waters beside it. Churchill, in Manitoba, Canada, is well-known for its polar bear-watching experiences, but it’s also the place to go for those interested in braving the freezing seas to get to know belugas. Sea North Tours adds an extra element in their effort to ethically approach these creatures: They guard their boat propellers so there’s nothing that could accidentally injure a brave beluga. 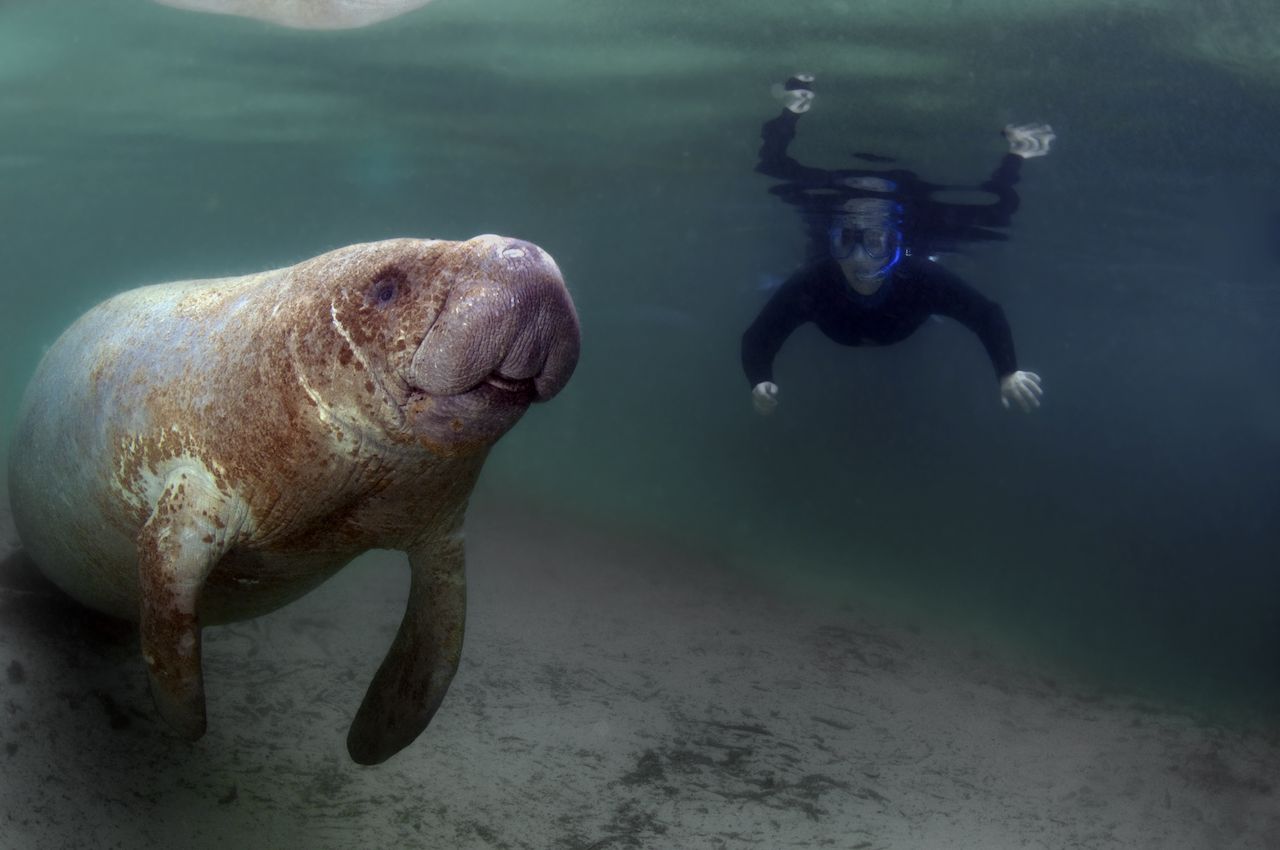 Manatees are highly-protected endangered animals that suffer constantly from our collective desire to go in boats and get too close. As such, it’s illegal to touch or even approach a manatee. But every winter in Crystal River, Florida, manatees congregate in such large numbers that an allowance has been made to let people wade into the water with them.

“The manatees congregate here every winter to take advantage of the 72-degree water that flows from the springs throughout Kings Bay,” explained Garcia Brindley in an article on ethically experiencing manatees. “And though they have plenty of protected areas where they can rest undisturbed, they choose to come out and interact with the humans out of simple curiosity….Swimming with manatees in Crystal River is an even greater experience when you know you are not harassing or endangering the very wildlife that you’ve come to see.” 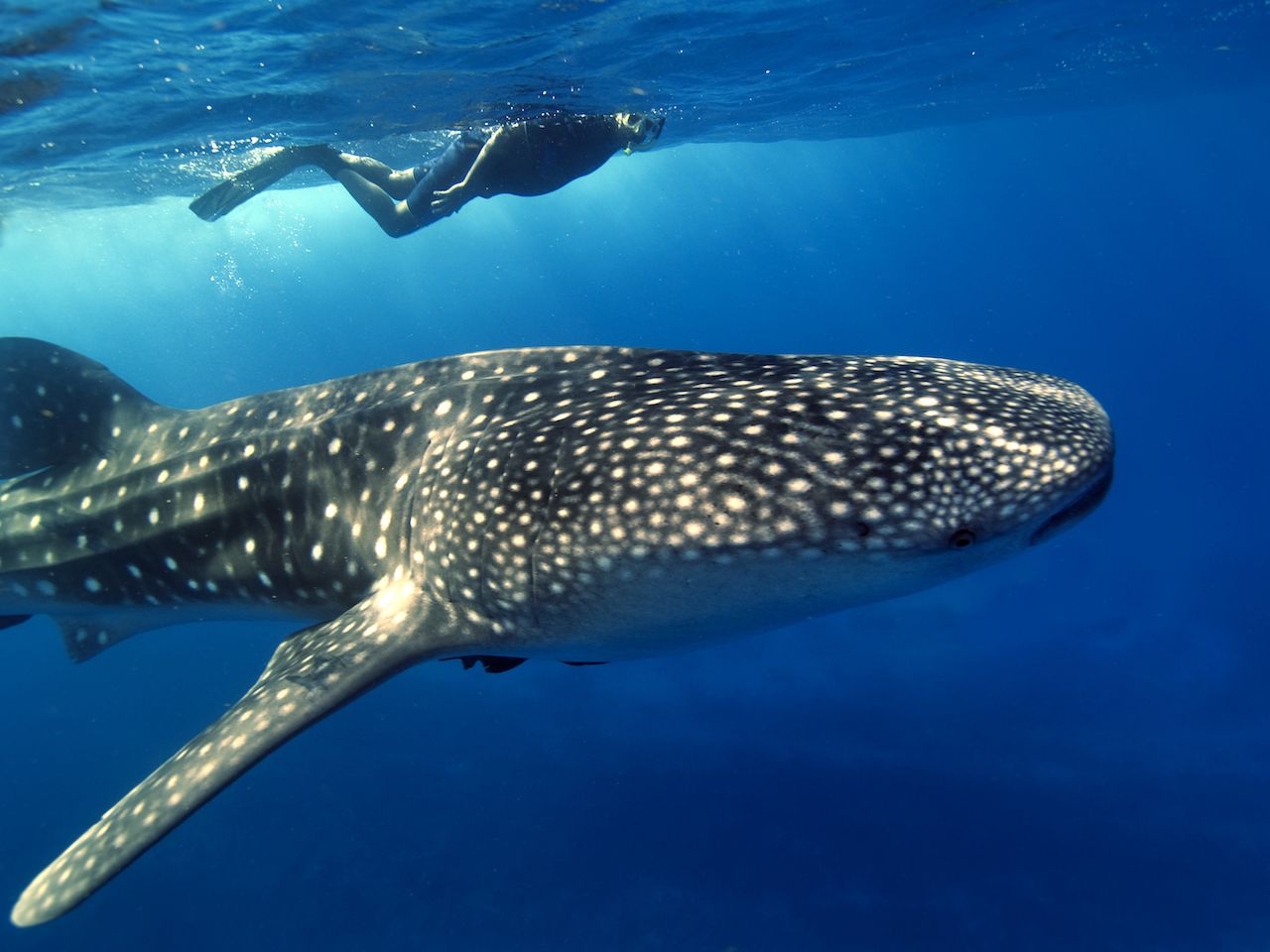 Between March and June, the full moon brings whale sharks to the Belize Barrier Reef. The world’s largest fish consistently arrives on schedule to feast upon fish eggs deposited in the waters just off Belize’s coast, and it’s during this time that divers, and even snorkelers, have the opportunity to witness the majesty of this unique animal.

This gentle giant can be curious and playful with people, but it should always be allowed to decide whether or not it wants to get close to divers itself. The same can be applied for the myriad of wildlife you’re likely to see while witnessing whale sharks, including stingrays, cuttlefish, and bottlenose dolphins. 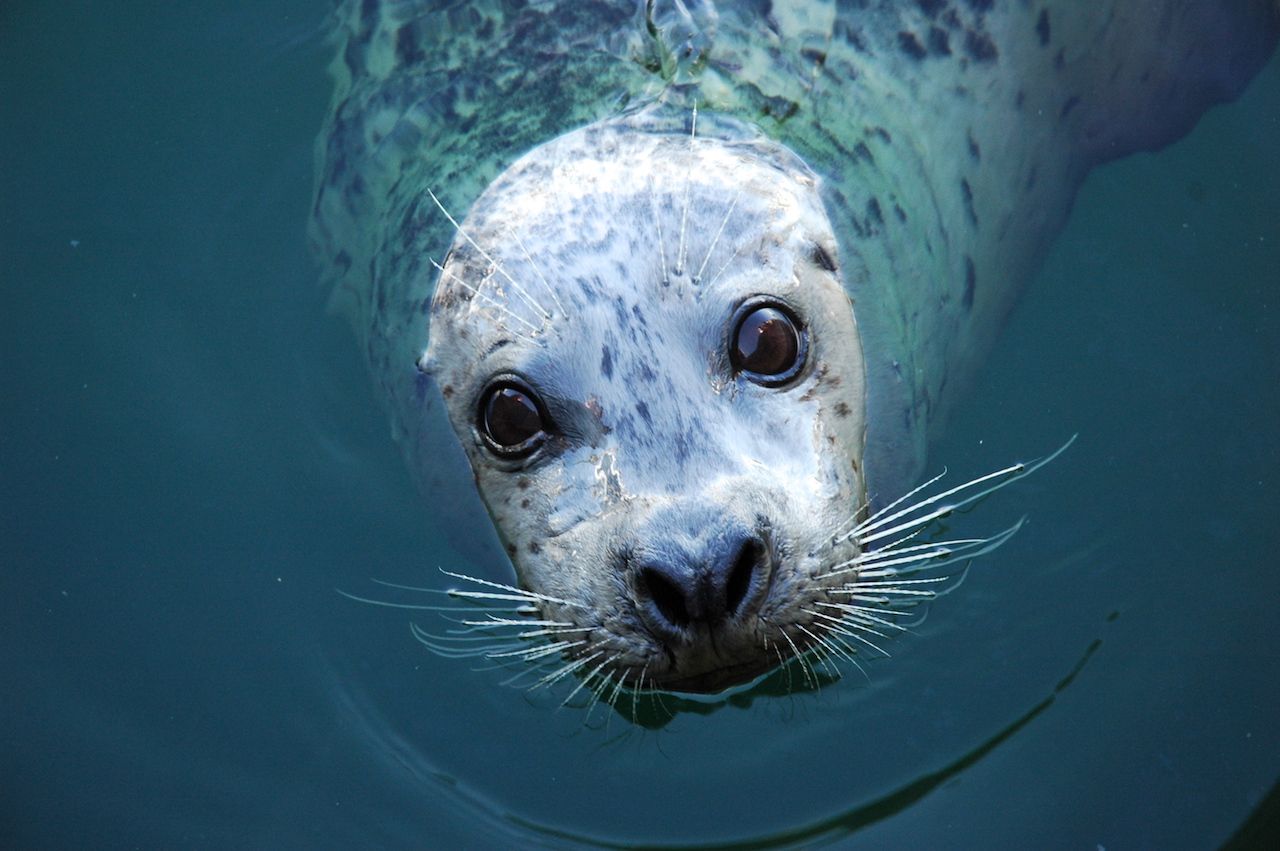 Seals, sea lions, and other pinnipeds almost seem like the dogs of the sea. They’re familiar, playful, and have big, round, puppy dog eyes that are impossible to resist. Howe Sound near Vancouver in British Columbia is teeming with wildlife, including harbor seals, many of which are down to inspect human visitors to their waters.

Don a wetsuit whether you’re staying above water in a kayak or snorkeling through seal territory with Sea Dragon Charters, an outfitter that leaves human interaction entirely up to the animals. Seals can become very enthusiastic in their play, so it’s important to get an idea of what their natural behaviors look like. With seals, as with all the other members of this list, Garcia Brindley advises “learn[ing] signs that an animal is stressed. If it is, leave it alone. If it is feeding or sleeping, leave it alone. Always give marine animals their space and a clear path to exit the area if they wish.” 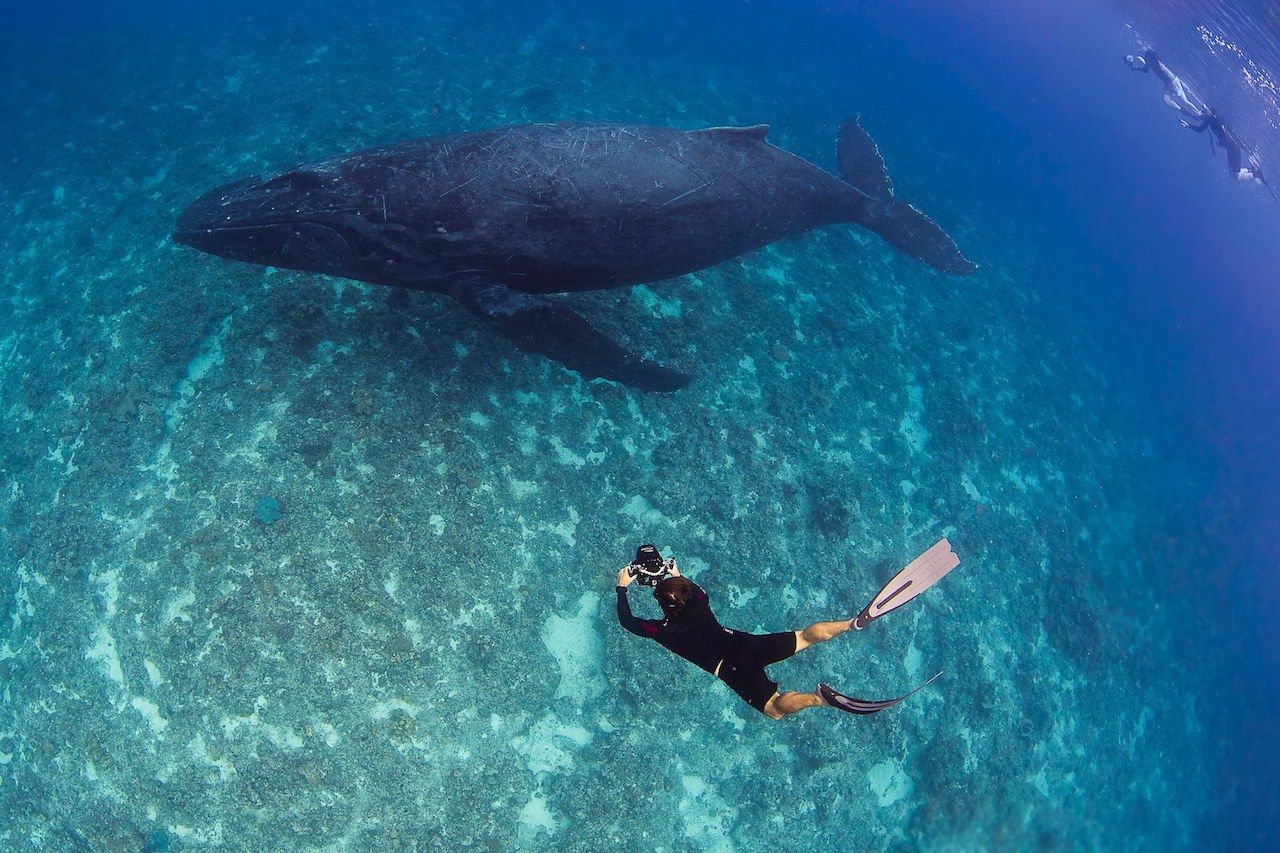 From June to October in Tonga, as well as around other islands in the South Pacific, tourists can snorkel in the water alongside humpback whales as they enjoy the region’s warm waters.

These whales roam the world’s oceans, but Tonga is one of the few places in the world that is licensed to allow tourists in the water with them. Humpbacks can be overwhelming in their size and how they seem to materialize from the deep blue, but one simply needs to float and watch them to gain an appreciation for this intelligent, playful species. Give the whales their space and look into their soulful eyes to find that they’re observing you as you observe them. 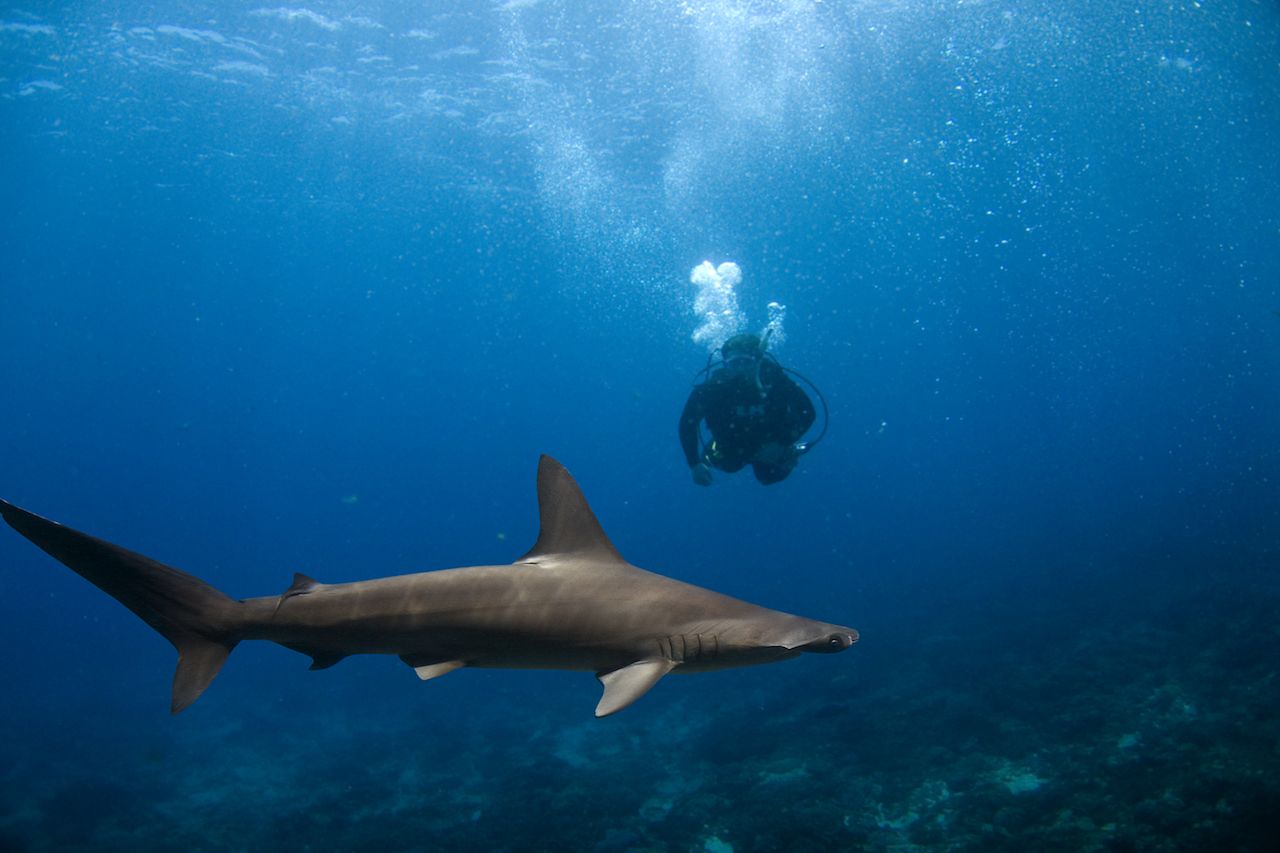 Swimming in the ocean inevitably means treading water among sharks. Deep waters between the Galápagos Islands offer the unique experience to enter the hammerhead’s domain. Hammerhead sharks are one of the more aggressive shark species when provoked, so keeping your distance is essential to having a positive wildlife interaction. Sailing and diving outfitters in the Galápagos are your best resource for diving or snorkeling with hammerheads. Here are some tips for safely swimming with hammerheads. Despite the risks, witnessing these curious creatures surrounded by the endless sea is an exercise in humility.

WildlifeSwimming With Dolphins in the Red Sea Is a Truly Magical Experience
Tagged
Diving Trip Planning Wildlife
What did you think of this story?
Meh
Good
Awesome