Standing on the rickety suspension bridge over the Segama River, I am enveloped in the lush greenery of the ancient tropical rainforest. The heat is palpable, and the moisture-laden air is buzzing with a cacophony of insect calls. Thick clouds of mist drift lazily over the treetops and a rumbling sound growing in the distance warns of an approaching downpour.

This is Borneo’s Danum Valley, home to one of the oldest rainforests on Earth. Estimated to be 140 million years old, this forest has a distinctly primeval feeling to it. I almost expect a raging Tyrannosaurus rex to burst out of the mist. 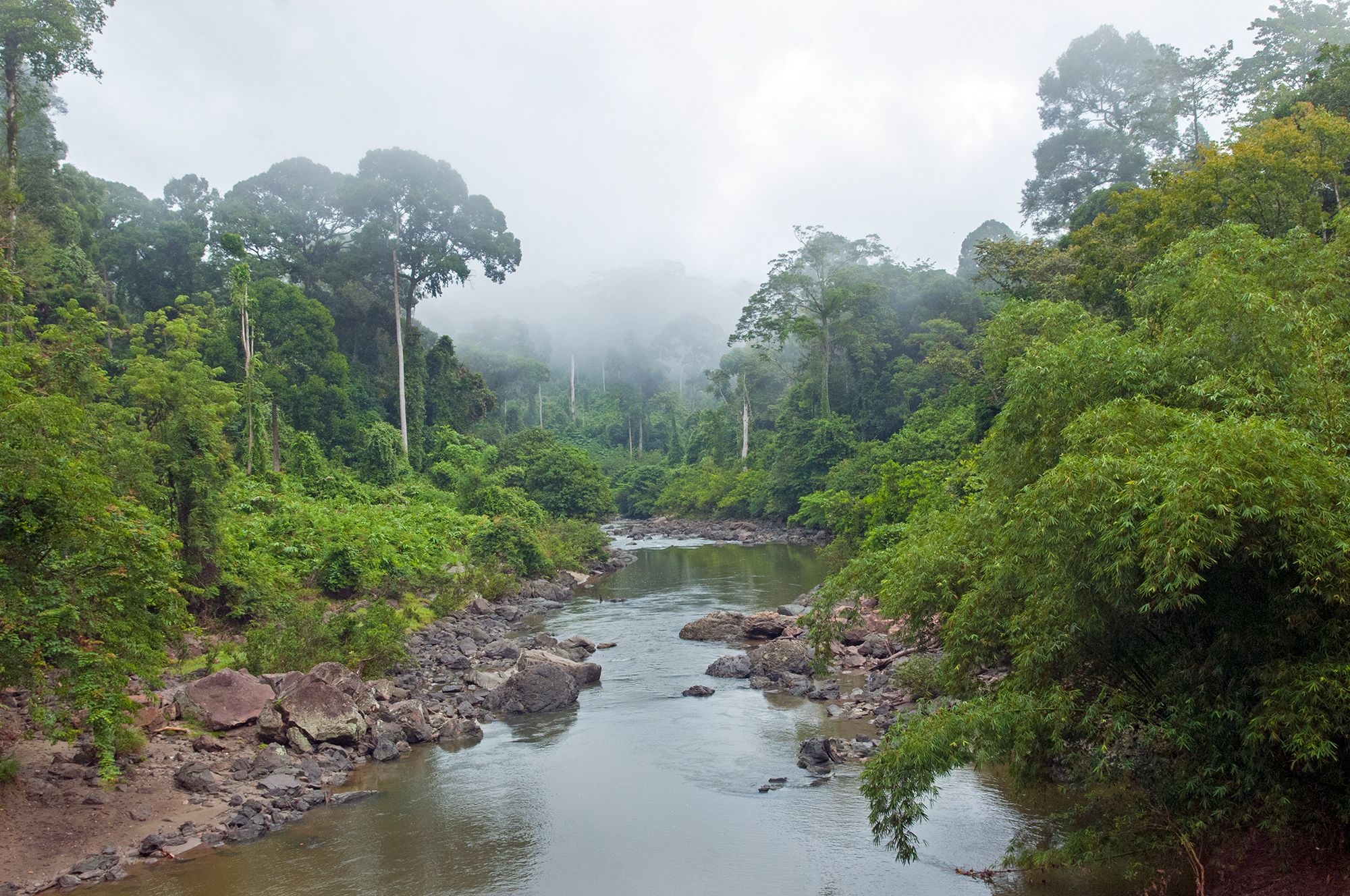 But I am here to look for much less sinister creatures. Danum Valley is home to all five species of Borneo’s wild cats: the almost-never-seen Borneo bay cat, the elusive Sunda clouded leopard and marbled cat, the endangered flat-headed cat, and Borneo’s own species of leopard cat — the Sunda leopard cat.

Most of these cats are nocturnal hunters, concealed deep in the jungle during the daylight hours. But the jungle is teaming with life at any time of the day.

I return to the Field Centre — the research facility where I am staying, and discover a group of maroon langurs lounging in the low branches of the trees and occasionally sprinting across the lawn. It is a rare sight to see these handsome canopy-dwelling primates at such close range. They wouldn’t be as cheeky in the presence of a clouded leopard, but lucky for them, and not as much for me, no cats are lurking in the shadows. 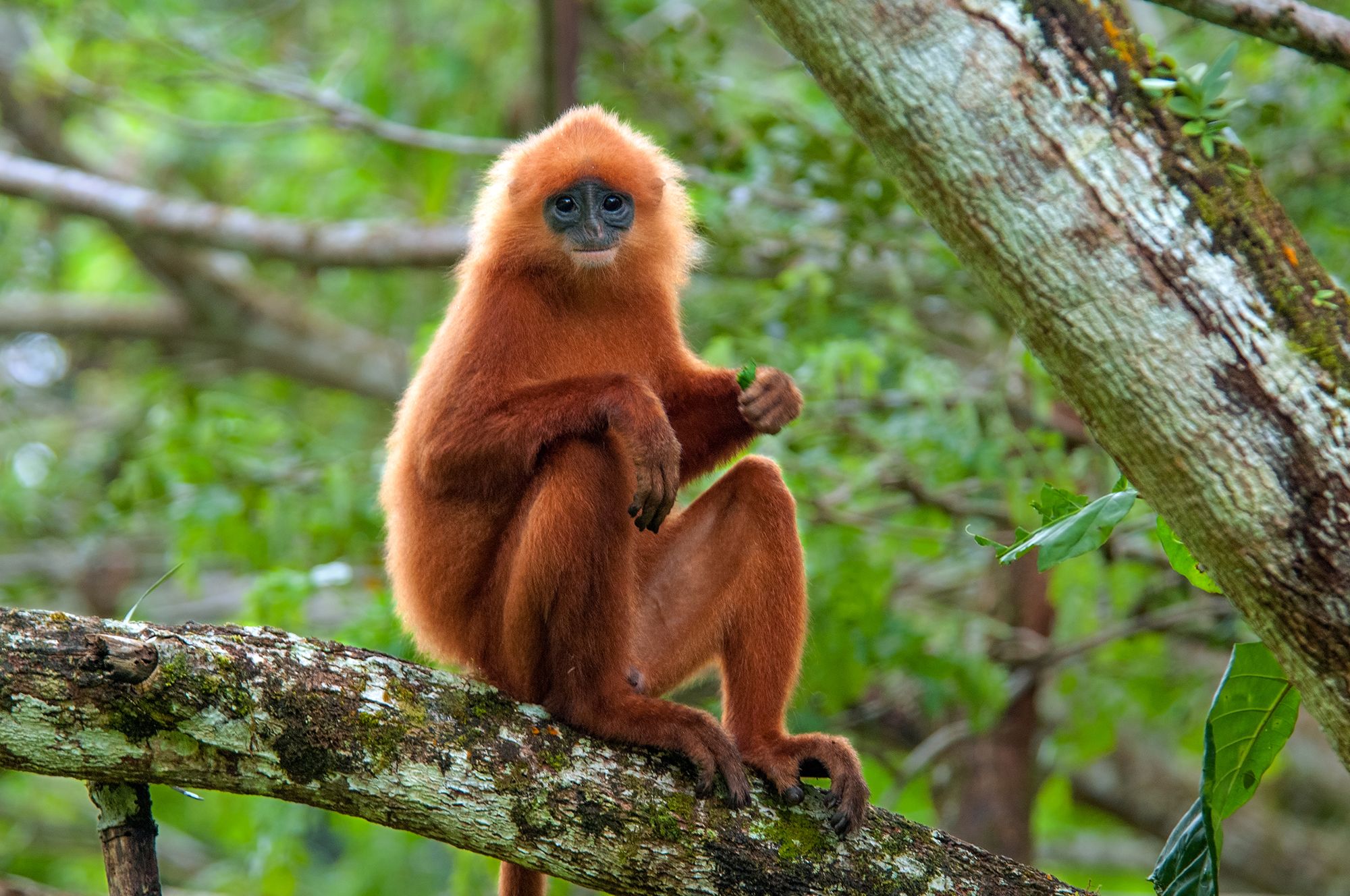 Searching the jungle at night

When the darkness falls, our guide Mike leads us on a night drive. Standing in the back of a pickup truck, we follow the beam of Mike’s spotlight, as it dances across the solid wall of jungle. Soon we spot a three-striped palm civet munching on fruit high up in the canopy. Next, Mike points out a slow loris looking down at us with its cartoonishly large eyes.

We concentrate so hard on the canopy that we almost miss our first wildcat — the dainty Sunda leopard cat sitting on a log by the side of the road. It is smaller and more delicate than I expected. It appears to be snoozing peacefully, but only until an unwary rodent or a frog venture out on the road within its field of view. 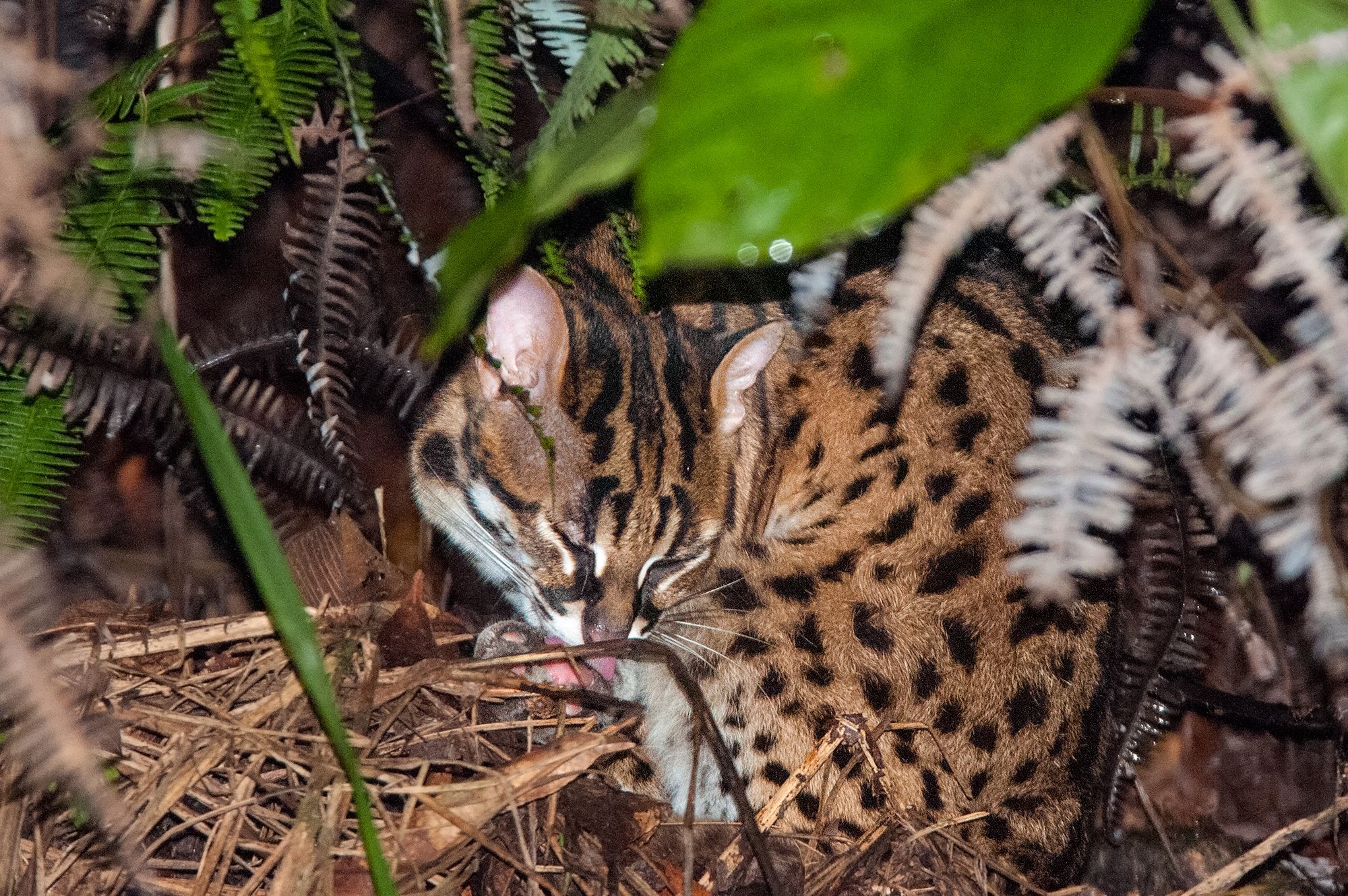 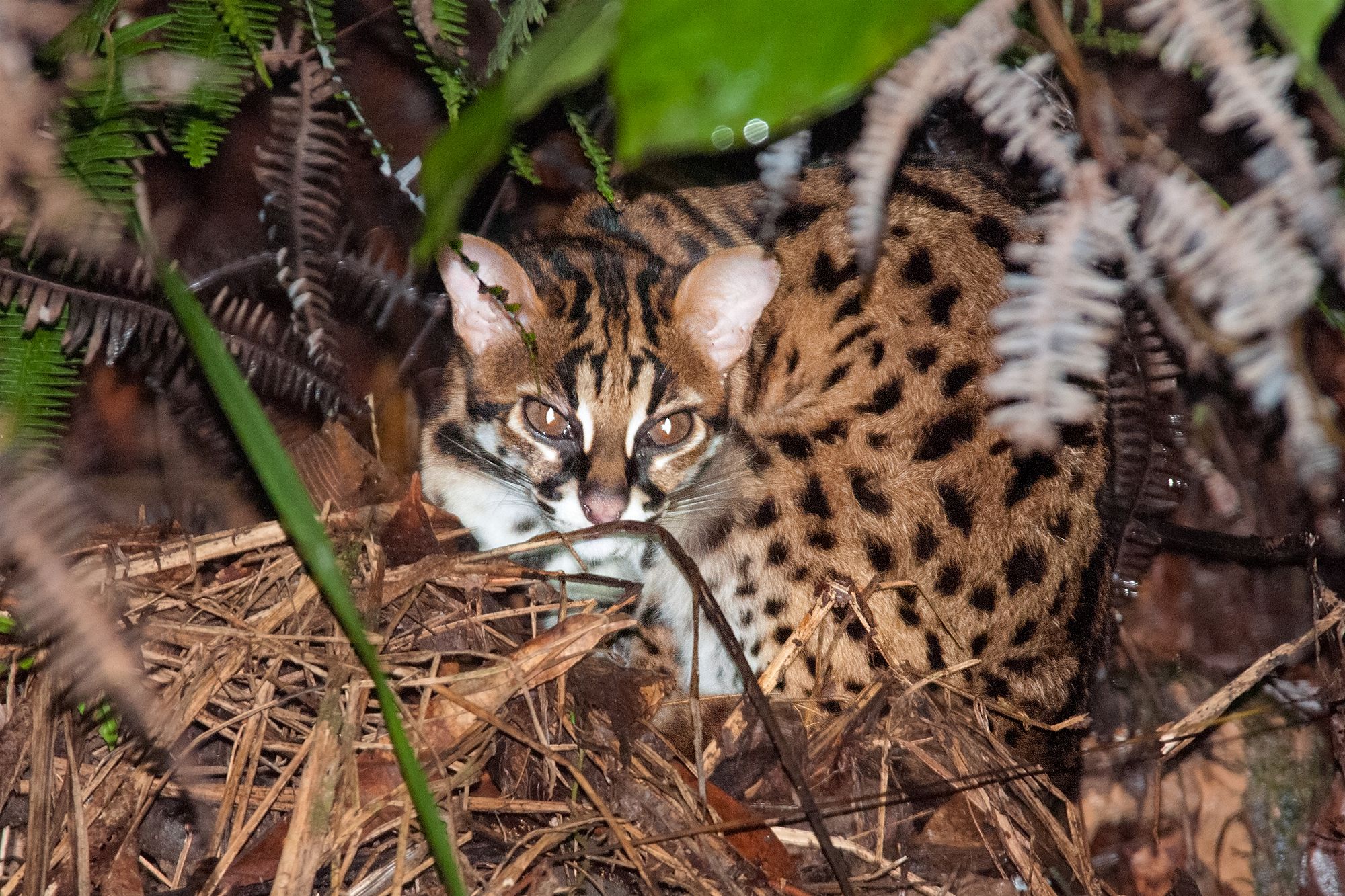 On our approach, the cat decides to move into a more concealed location in the roadside vegetation. But the grass is wet, and it spends the next 10 minutes fastidiously cleaning its fur from the droplets of water it collected during its short walk.

Searching the jungle at dawn

The next morning, we get off to an early start. It is still dark and refreshingly cool when we load into the truck for a pre-dawn drive to the canopy tower to watch the sun rise over the valley. Except that, in the middle of the rainy season, instead of a sunrise we get what Mike calls “a misty ambiance.” From the top of the tower, the ambiance looks incredibly atmospheric. Layers of thick fluffy mist hang above the treetops, forming a sea of clouds in the valley below. 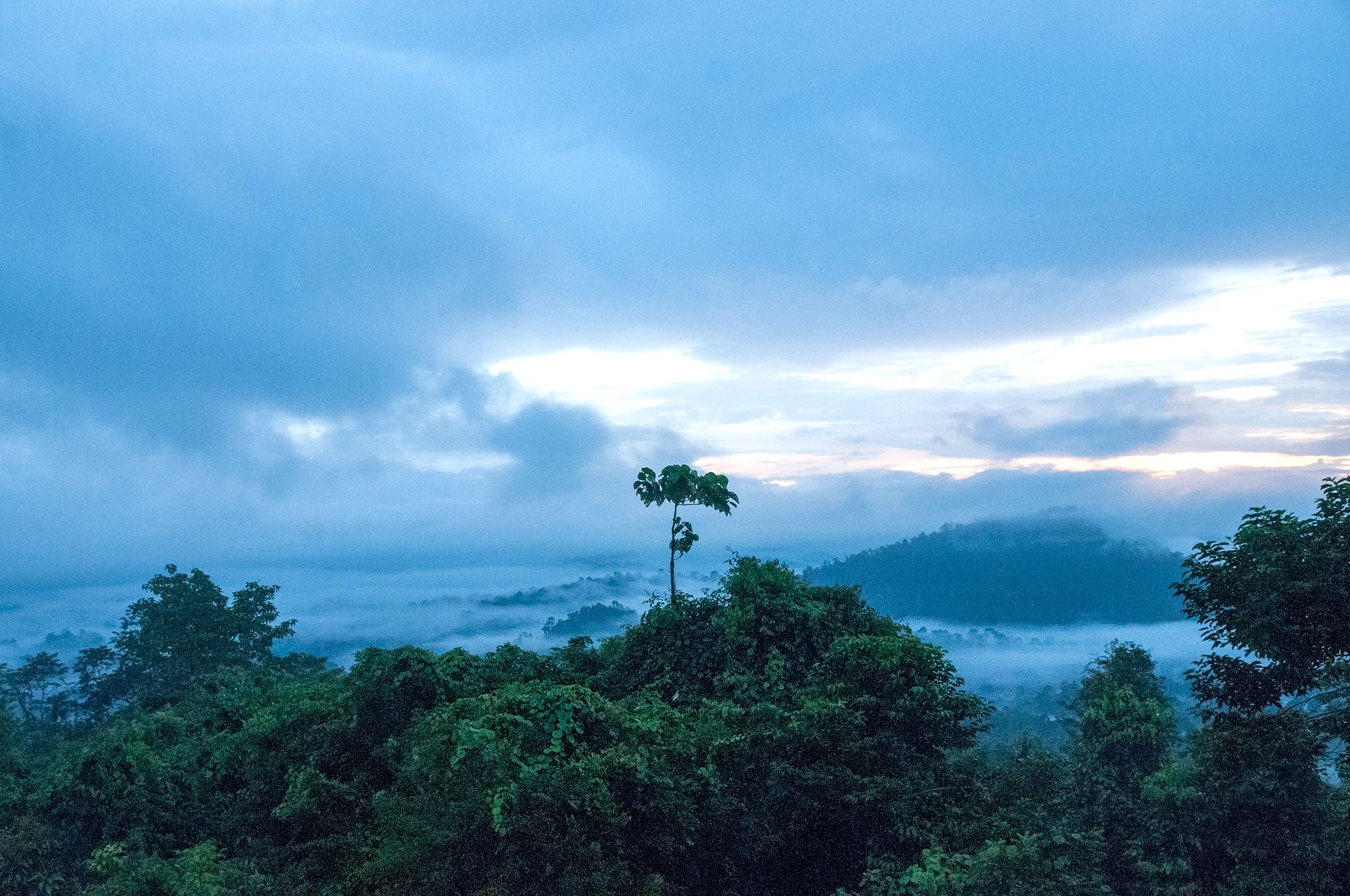 “Look! What is this?” cries out one of my companions suddenly, pointing at an animal that looks suspiciously like a clouded leopard crossing the trail below. We hold our collective breath as we peer through the darkness trying to get a better look at the animal. Long body, feline gate… Is it? “Nah, palm civet”, comes Mike’s nonchalant response, dousing our hopes of a once-in-a-lifetime sighting. “A clouded leopard always curls its tail up when it walks. This was clearly a civet.”

Searching the jungle on foot

One night, we go on a night walk before the drive. Trudging up and down the muddy, leech-infested trails in the pitch-black darkness of the overcast night, we get a better sense of the cats’ world. The night is quiet, the air is fresh after the late afternoon rain, and every surface in the forest is covered with a layer of precipitation that will evaporate in the morning, condensing into a thick layer of mist.

The light of our head torches brings snapshots of the night’s inhabitants momentarily into existence: sleeping lizards clinging to wet leaves, a mouse deer snoozing in the thickets, a rare pen-tailed shrew scurrying in the undergrowth, but no more cats. 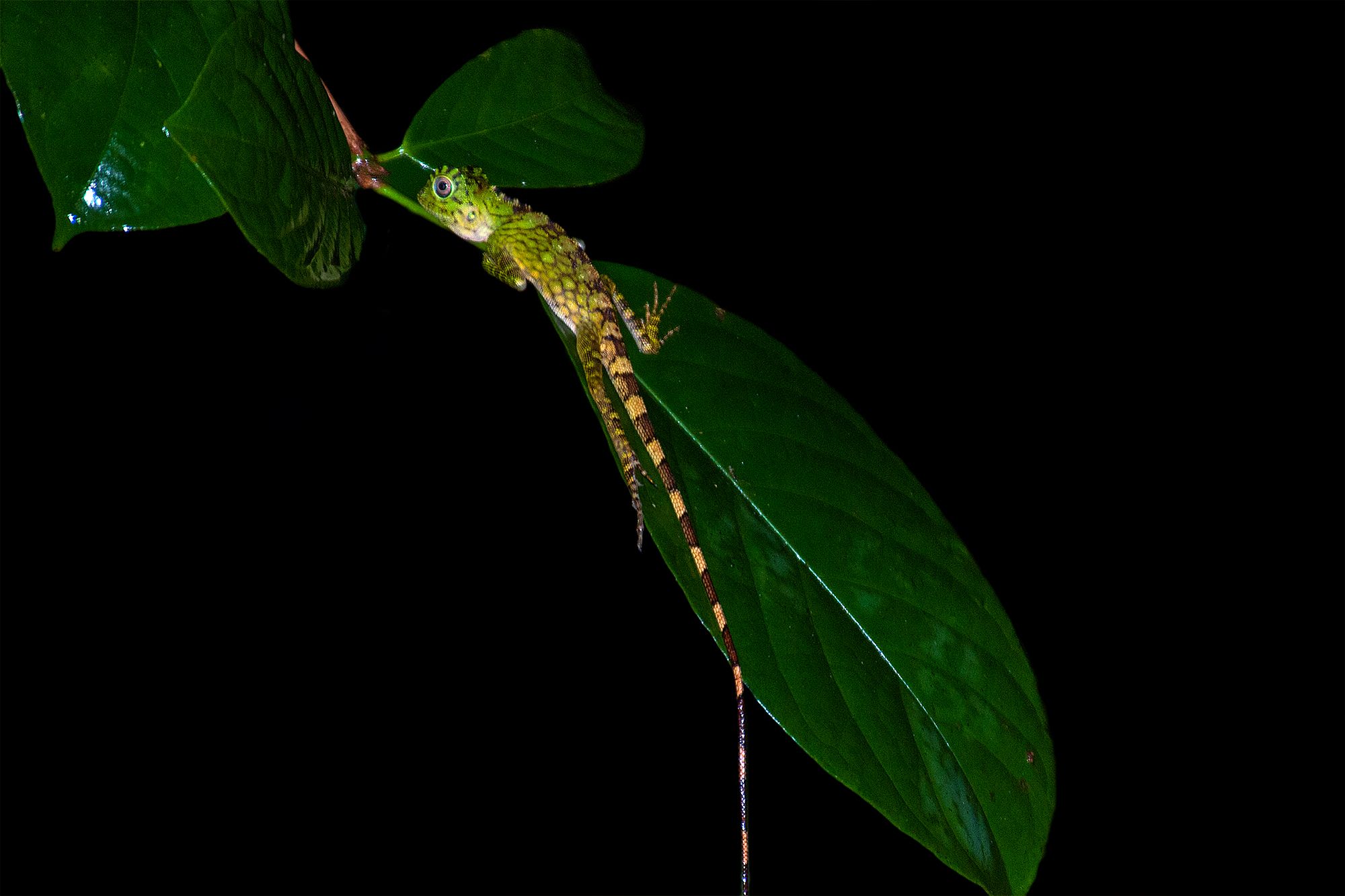 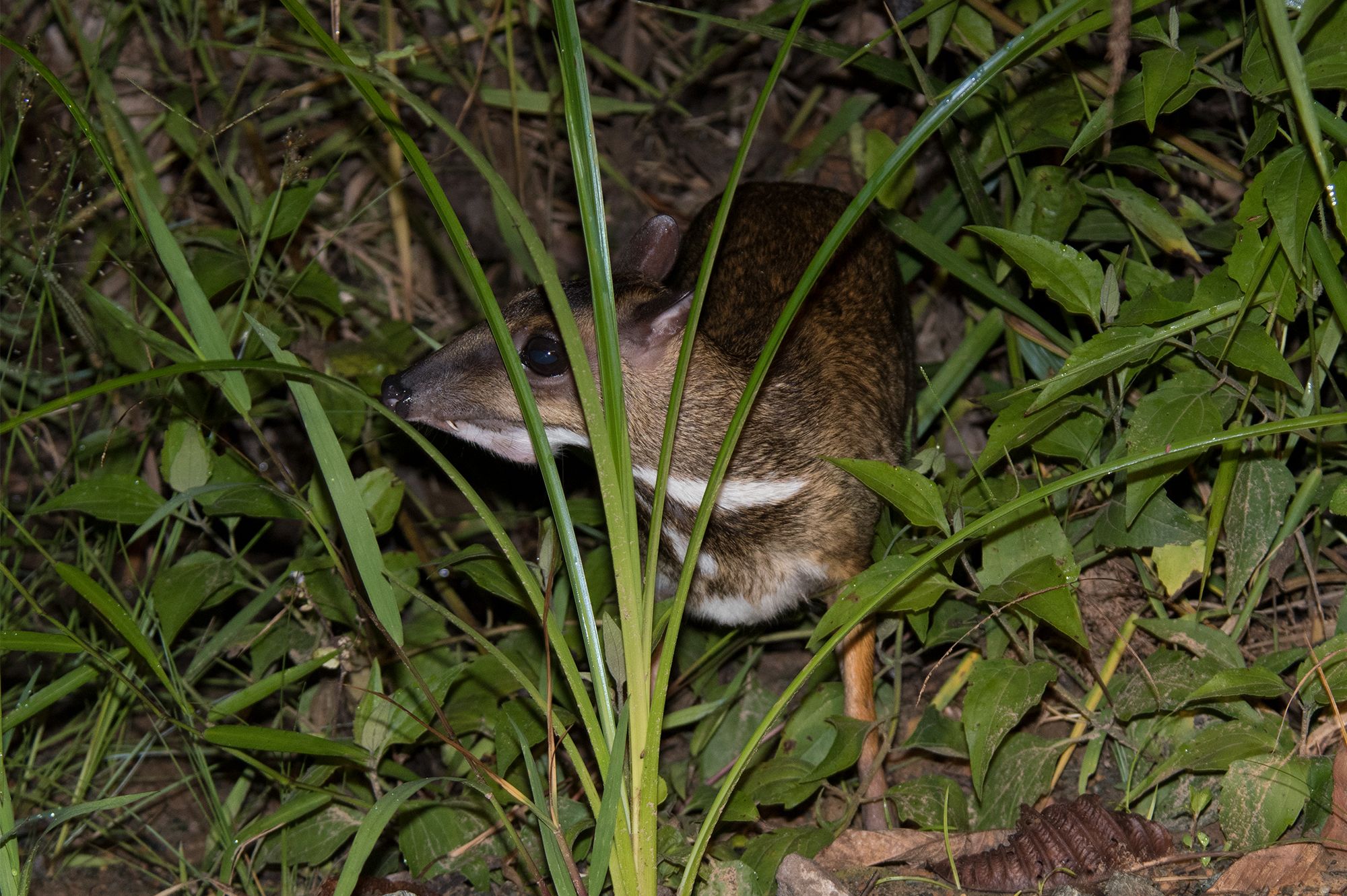 Not all is well in the jungle paradise

On our last night drive in the valley, we push on beyond the access gate in an attempt to cover more ground. Suddenly, the stillness of the night is broken by the revving of an engine and the glare of bright head lights approaching from around the bend. Concerned, we wait to see who it is. Only the rangers are allowed to drive on this road at night, and all the rangers are back at the field center.

Minutes later, we are blinded by the powerful spotlights mounted on the roof of a mud-encrusted 4WD truck flying past us without slowing down. There are no number plates on the truck. “Poachers!” Mike curses in outrage and disgust. It feels like a crime against humanity to see poachers inside Danum Valley. It makes me sick to my stomach. We turn around and chase after them back towards the gate.

Our chase is short-lived, however. A few minutes later the poachers’ truck speeds threateningly past us in the opposite direction. They realized they had nowhere to go, now that they have been seen and decided to make a run for it.

Are protected areas safe for wildlife?

We feel no relief at fouling their plans, only the bitter disappointment of realizing that the wildlife in the Valley is not as safe as we used to think. Danum Valley is unique among Borneo’s protected areas in that it has never been altered by the hand of man. There is no record of human settlement in the area prior to its protection.

Yet now, the Valley is more accessible than ever. The access road has opened up the area not only to the scientists and the wildlife watchers but also to the hunters and the trappers. Does our desire to explore and study the remote corners of the world bring more harm than good to these places?

Sabah government has ambitious plans to extend its network of protected areas to 30% of its entire surface area by 2050. But without enforcing protection, the legal status alone is not enough to safeguard the wildlife inside these areas. Without extending financial benefits to the local community and establishing anti-poaching patrols, we may end up with protected forests that fail to protect the wildlife.

NarrativeMy Quest Is To See All Species of Wild Cats in Their Natural Habitat. Here’s What I Saw in Tibet.
Tagged
National Parks Wildlife
What did you think of this story?
Meh
Good
Awesome