I step out of the car into complete darkness and immediately feel the chill of the Tibetan Plateau. The car thermometer shows 6 degrees, but it is probably closer to zero, factoring in the windchill. Here, on the Ruoergai grassland, in the remote northern tip of China’s Sichuan province, at 3600 meters above the sea level, the wind seems to be a constant presence.

To my right, the imposing shape of an abandoned quarry towers over the grassland. Beyond it, the landscape dissolves into the night. I scan the area with a powerful spotlight and immediately spot two bright green dots — an animal’s eyes, reflecting back at me from halfway up the face of the quarry.

‘Pallas’s cat!’ exclaims Sid, my guide on the plateau. The cold and the wind immediately forgotten, I hold the light glued to the spot, while Sid hurries to set up the scope and trains it on the shining eyes. Once it is focused, Sid motions for me to have a look.

The sight takes my breath away. A beautiful face of a Pallas’s cat appears to be inches away, its small pink nose sharply outlined against the silvery grey color of its face, its dense fur all fluffed up against the cold of the night. 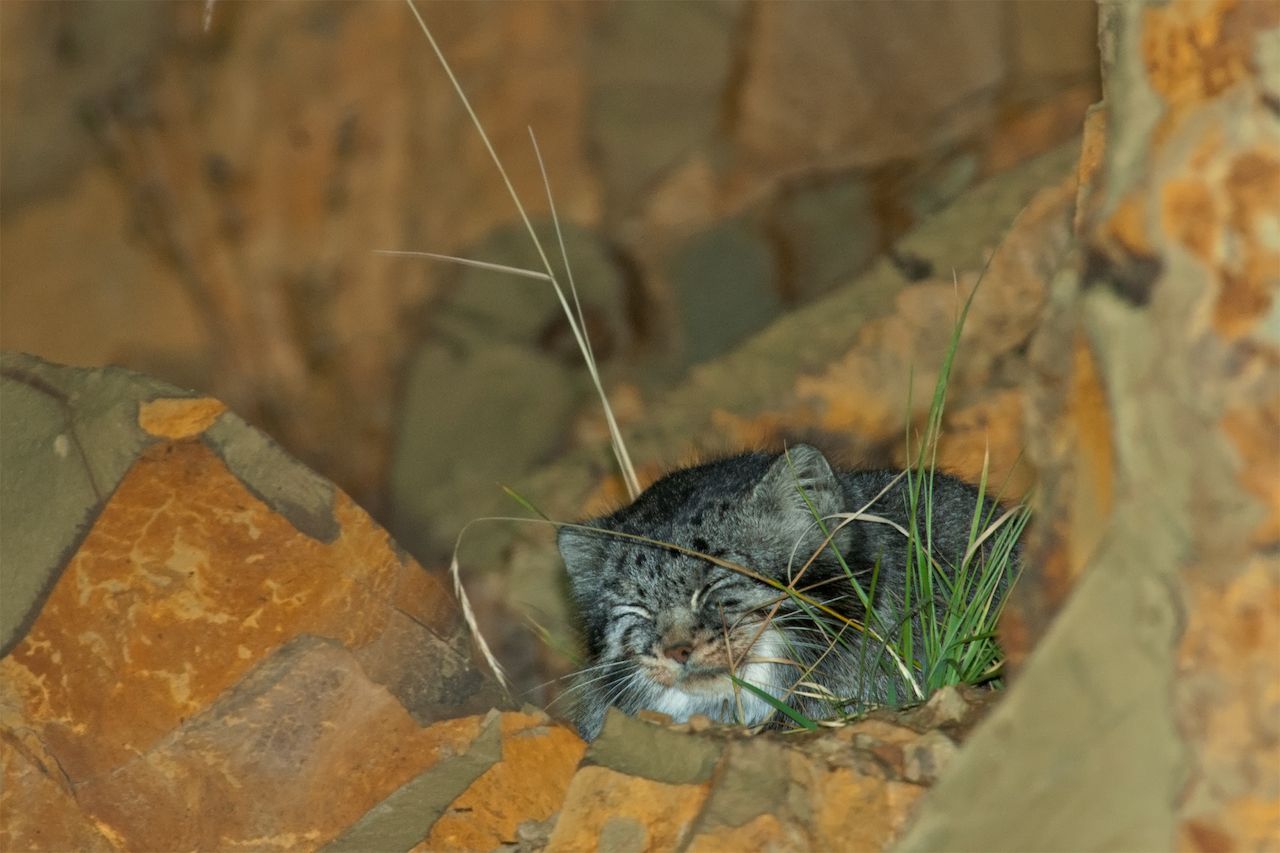 A few years ago, I set myself on an ambitious quest to see all 40 species of wild cats in their natural habitat. That’s 40 instances of sheer luck, of being in exactly the right place at exactly the right time. So, here I am, standing on the roof of the world, looking at one of the most beautiful and most unusual members of the feline family.

Cautiously, we make our way to the face of the quarry, huffing and puffing in the rarefied air. The cat is snugly curled up in a small crevice and doesn’t seem to mind our presence. Pallas’s cats are masters of camouflage; they rely on their ability to remain motionless to avoid detection. Perhaps it thinks we can’t see it.

Grateful for the opportunity of such a close encounter, we don’t want to push the friendship and after taking a few photographs slowly return to the car.

Our next challenge is to find the ghost. At least, that’s what it feels like. Most cats are rare, of course, but some are much more elusive than others. The Chinese Mountain cat, in particular, is so rarely seen in the wild, that not much is known about its ecology, behavior, or even the exact distribution range. How do you find a cat that no one ever sees?

Enter Sid Francis, the expat birder and wildlife guide, who has, against all odds, found the Chinese Mountain cats, as well as Pallas’s cats at his birding sites on the Ruoergai grassland.

We head down the quarry road. Despite the increasingly cold temperature, I keep my window completely rolled down, so I can spotlight out of the car as we drive along.

Within minutes I pick up another eye-shine off the road — two burning dots against the blackness of the night. There is no time to set up the scope, so we examine the animal through a pair of binoculars. Unbelievably, it is a Chinese Mountain cat hunting on the grassland. It pauses to look at us briefly and then turns back to its unseen prey, following it deeper into the grassland until it disappears into the night. 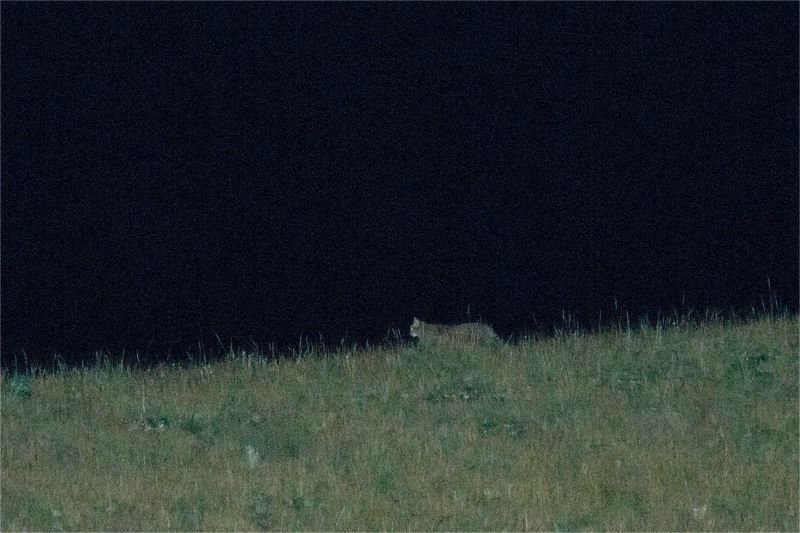 The next morning, I wake up to a gloomy sky and drizzling rain. ‘We probably won’t see much wildlife in this weather’, muses Sid and suggests a visit to the nearby town of Langmusi, which is home to two large Tibetan monasteries.

‘Nearby’ by Tibetan standards turns out to be 86 kilometers away, which means plenty of opportunities for sightseeing. The road meanders across the vast landscape of the Ruoergai Wetland National Nature Reserve that sprawls over 2,600 square kilometers on the Eastern edge of the Tibetan plateau. This harsh and remote region is considered to be the largest high-altitude peat marsh in the world and is a major source of water for two of China’s biggest rivers: The Yangtze and the Yellow River. 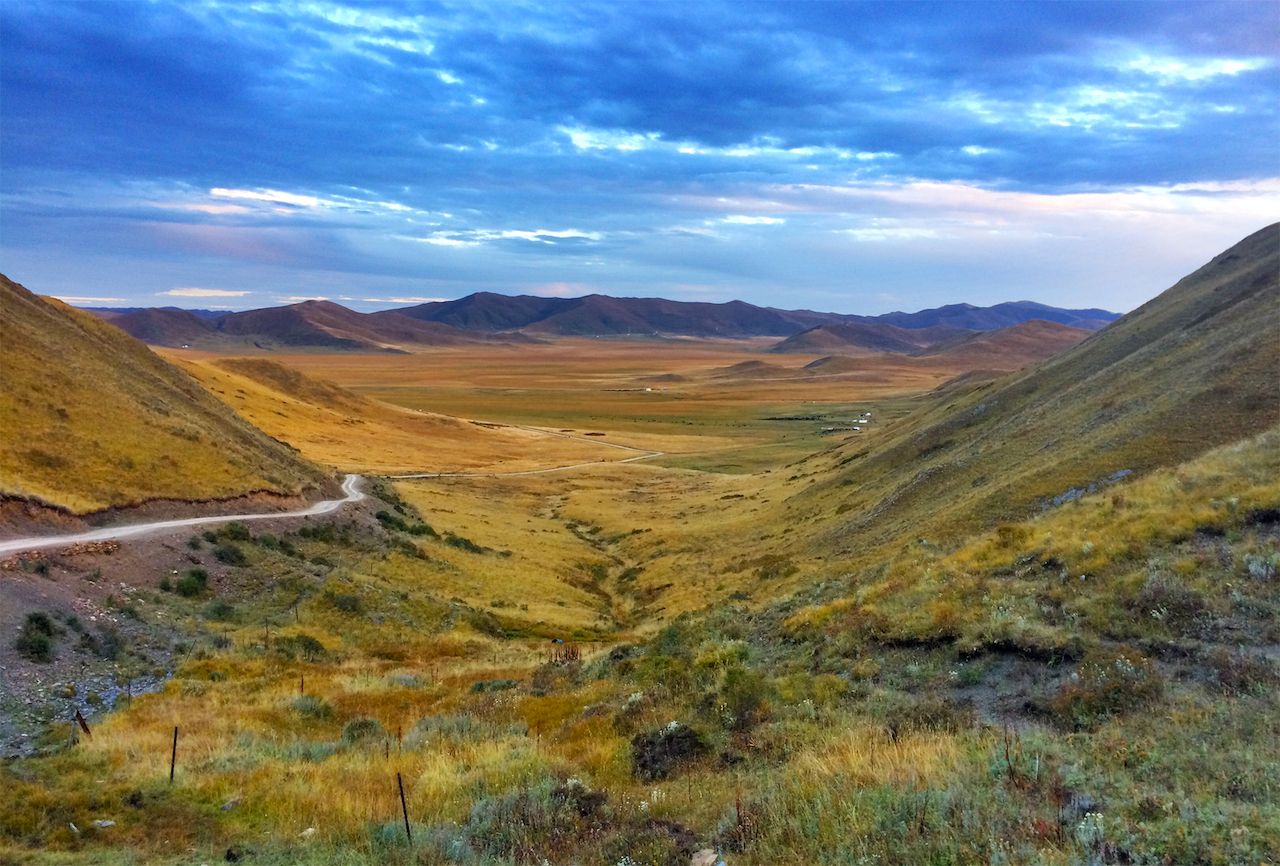 We travel through the endless succession of yellow-hued meadows and rugged hills interspersed with greener, wetter patches of marshes and bogs. White nomads’ tents with smoky chimneys grow like mushrooms on the sides of the road, surrounded by the obligatory herds of domestic yak and protected by the menacing Tibetan mastiffs. The smell of burning yak dung hangs in the air, mixed with the pungent scent of the animals themselves.

By the time we arrive in Langmusi the rain had stopped and the sun is fighting its way through a thick layer of clouds. Encircled by forest-covered mountains and bookended by two white-washed Tibetan monasteries the town is inhabited primarily by Amdo Tibetans and Hui Muslims. 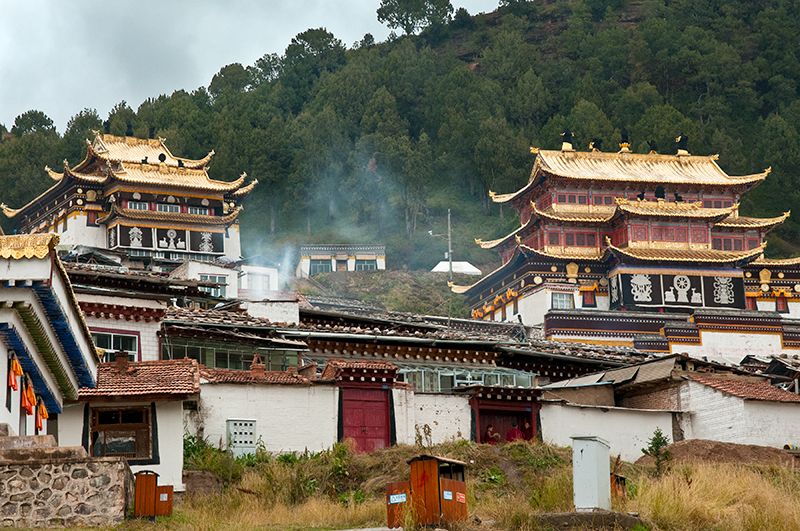 My first impression of Langmusi is that of a Tibetan Hogwarts. There are as many young novice monks on its narrow twisting streets as there are plain-clothed locals. I half expect them to pull out their wands and conjure up a ghostly Patronus.

We stop for lunch at a Muslim noodle shop, and while we wait for our meals, two young monks wrapped in dark burgundy robes walk in and take a table by the wood burning stove. A Muslim serving girl, hair tucked in underneath a headscarf, takes their order. Another table is occupied by a Han Chinese family, making their way through a large helping of noodles. The two of us add some exotic flavor to the ethnic diversity of the clientele.

Return to the quarry

After dark, we return to the quarry and find the Pallas’s cat sleeping in the same crevice as the night before. Sid spots another pair of feline eyes shining from the darkness on the slope of the neighboring hill. Surely this can’t be another Pallas’s cat. Cats do not like company. Sid peers through the scope and bursts out: “The Chinese Mountain cat!”

I can barely make out the shape of an animal concealed in a thick patch of grass, but I have learned to trust Sid and, without questions, I hurry after him up the slope. Despite the hurrying, however, our progress is painfully slow.

At this altitude, even a slight incline in topography feels like a mountaineering challenge. My lungs are starting to struggle to get enough air. The ground underneath our feet is peppered with broken rocks ranging in size from small pebbles to baseball-sized rugged lumps. The rocks are concealed underneath a thick carpet of wild oats — an obnoxious plant with its entire reproductive strategy being based on the ability of its seeds to burrow into the hide of a passing animal to hitch a ride away from the parent plant.

As we slowly make our way up the hill gulping air, tripping over unseen rocks and assailed by sharp seeds drilling themselves into our feet and ankles, we know all too well that at any moment the cat can get up and leave. Eventually, it does. Helplessly, we watch it walk away. As it reaches the crest of the hill, almost out of reach of Sid’s powerful torch, it stands out against the black sky like a ghostly apparition, before disappearing out of view.

Having climbed so far, in very relative terms, we are reluctant to give up. We labor up to the crest of the hill and scan the grassland below. Distant eye shine tells us that the cat is circling back to the quarry. We follow it again, struggling to keep up.

The next time we spot it, it is sitting contentedly on a pile of rocks mere few meters away from the Pallas’s cat’s layer. Shivering underneath all my clothing, I feel envious of its thick winter coat. Unlike me, the cat is completely at home on the cold, windswept plateau. 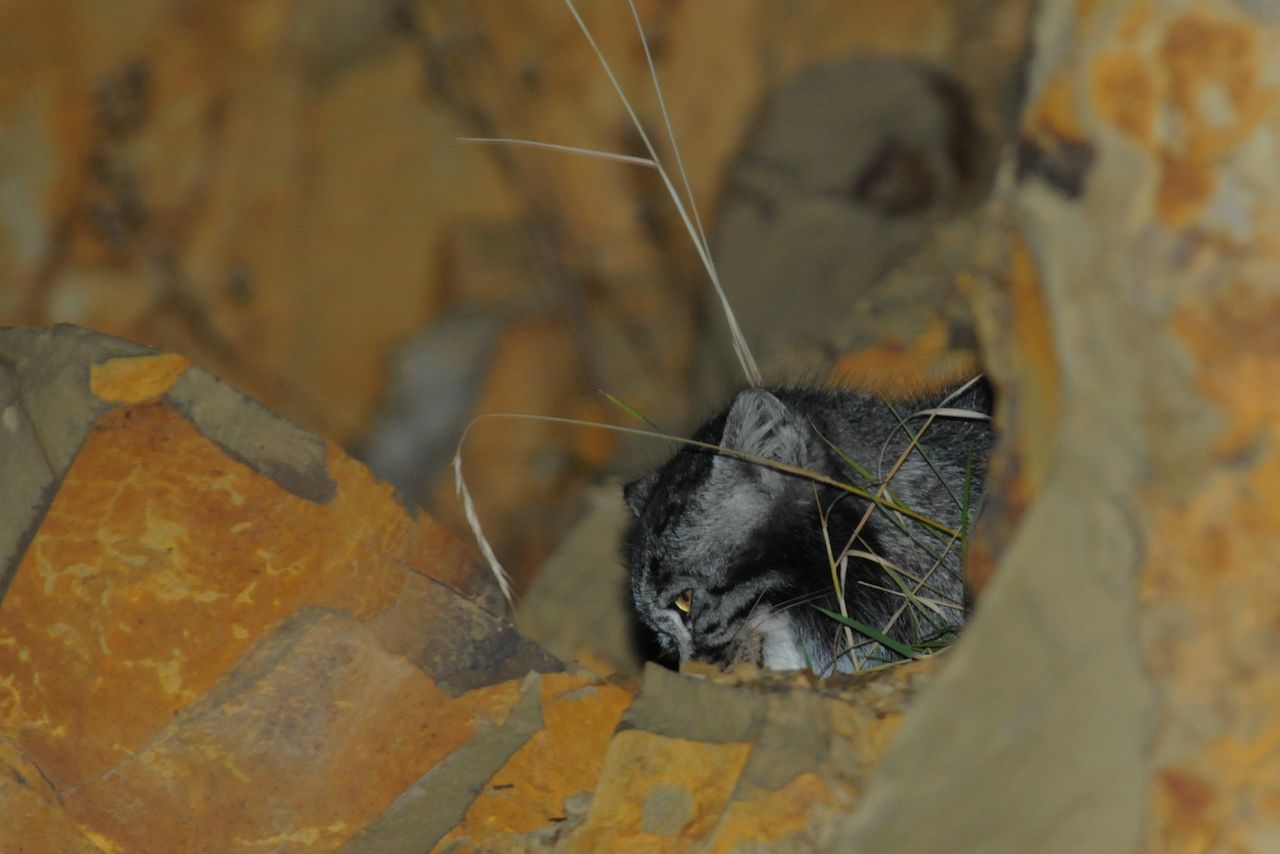 We watch the cat through the scope for what seems like an eternity and I feel a profound sense of gratitude for this moment in time that means so much to me. If I could find the Chinese Mountain cat, the species that has not even been photographed in the wild until only a decade ago, then perhaps my quest is not that impossible after all.

How To Experience Tibet Without the Permit

More and More Tibetans Are Lighting Themselves on Fire. Here's Why

Alexandra David-Néel: The Prima Donna Who Snuck Into Tibet in 1912 To Meet the Dalai Lama

On the Creeping Commoditization of Tibet

Life on the Tibetan Border