In a French bay near Normandy, a tiny group of islands called the Bailiwick of Guernsey dot the southern end of the English Channel. As rich in history and culture as they are in fresh seafood and sandy beaches, these secluded isles entice with outdoor pursuits and timeworn seaside towns. Although geographically closer to France, the Bailiwick’s regent is the Queen of the United Kingdom, but it has its own government, currency, and a distinct way of life melded from both nations.

The main island of Guernsey — from which you can access even smaller, more tranquil islands — has striking cliffs and low-lying lands leading to pristine golden beaches. All the islands make this a uniquely beautiful archipelago that has so far escaped the Instagram hordes. Here are the best things to do there.

Explore the highs and lows of Guernsey’s south coast cliffs. 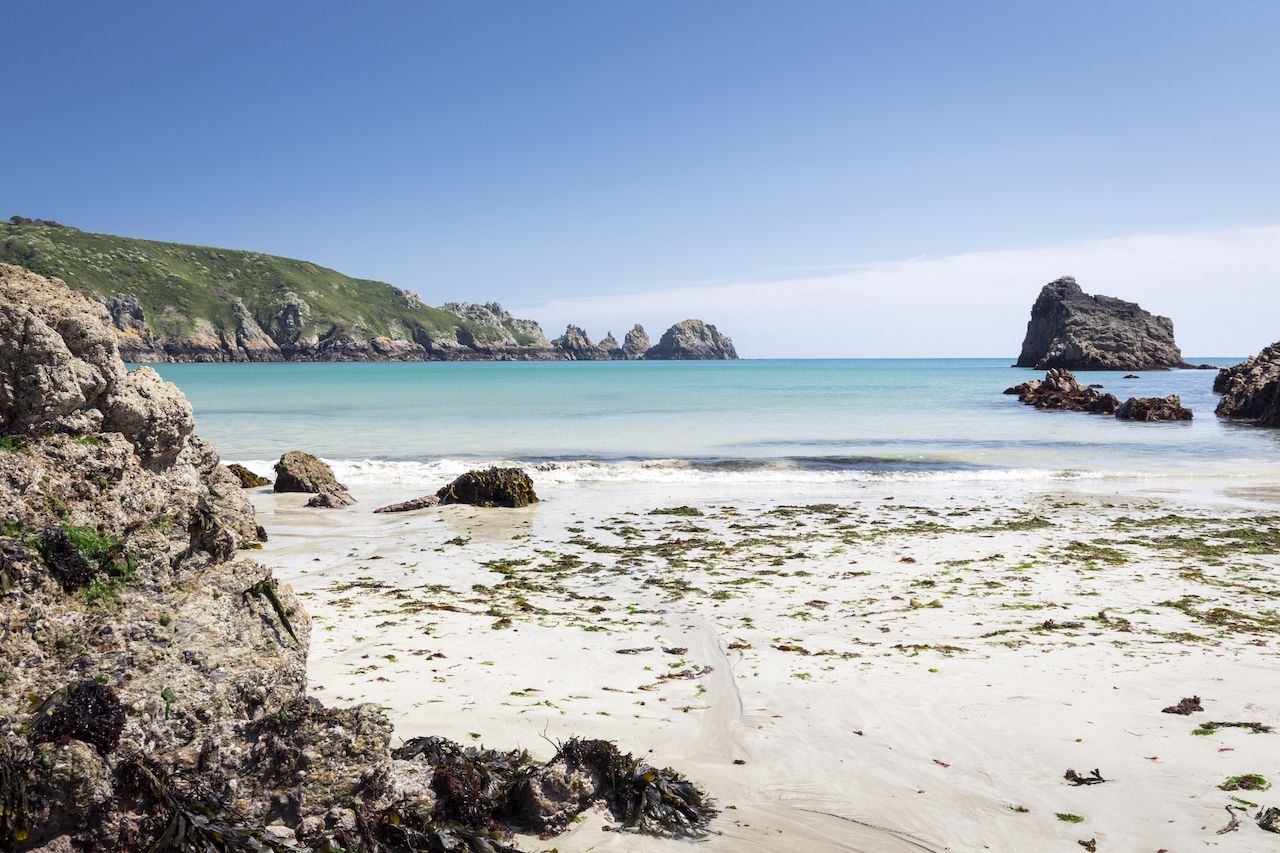 Starting from the main town of Saint Peters Port and heading southwest, you’ll find thousands of steps linked by miles of meandering footpaths leading through verdant forestry by the sea. It’s a manageable hike for those of all ages. For every rise in elevation, the south coast cliffs reveal a stunning coastline that has been the muse of famed artists, including French impressionist painter Pierre-Auguste Renoir.

You could walk the trails in a day from dawn to dusk, but the real fun comes from taking the time to explore the nooks and crannies. Descents almost always lead to pebble-strewn coves, towered over by immense granite rock faces. Beaches like Fermain and Petit Bot come complete with cozy cafes serving hot food and chilled ale. Tucked amongst the undulating folds of rock are also deep caverns like the Creux Mahie. Fisherman’s piers line the coast and make for great crystal-clear swim spots where you likely won’t see another soul.

Go coasteering along the south. 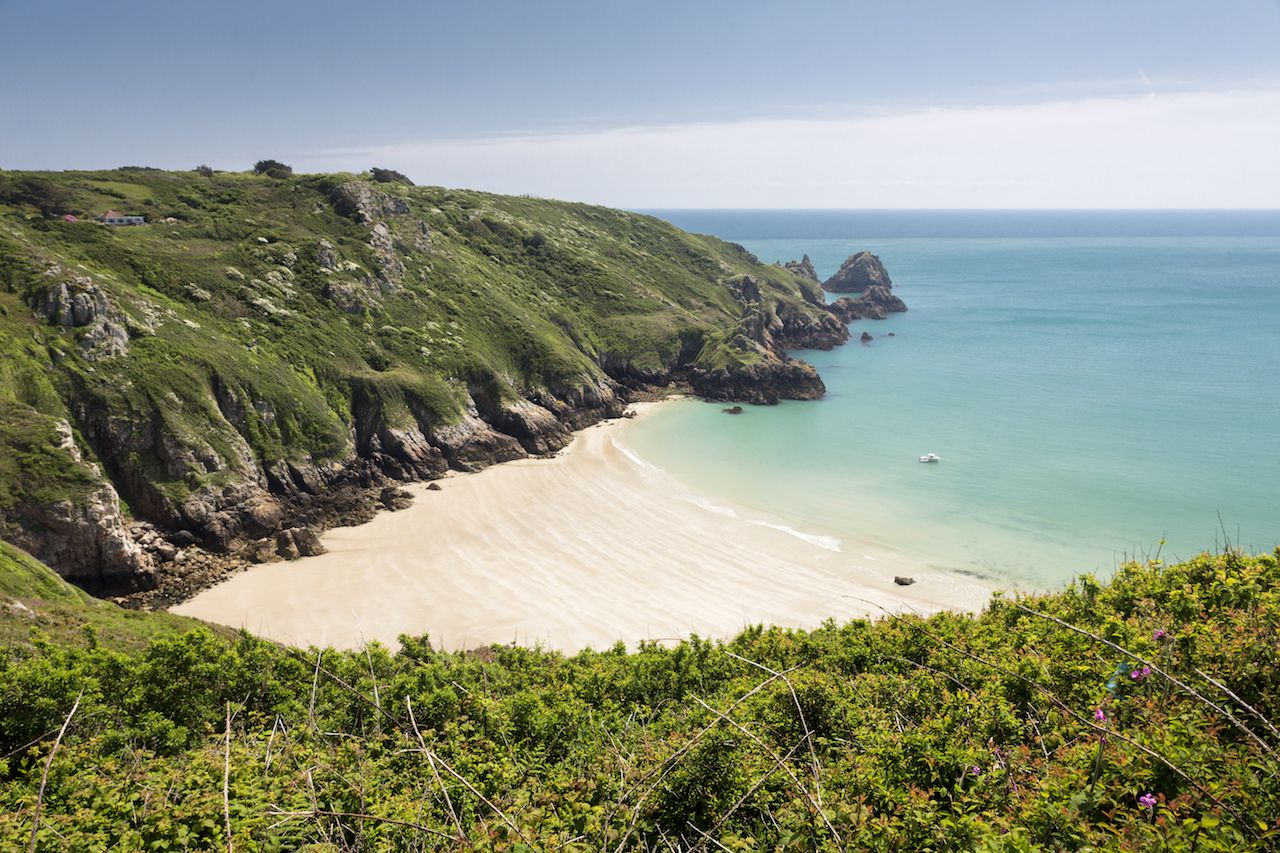 Especially at low tide, much of the south is exemplary for coasteering access to otherwise inaccessible bays. Coasteering involves working your way along a coastline, either scrambling over rocks, hugging cliffs, or even by wading or swimming in the water. For local children and adults alike, cliff-climbing is an enjoyable summer pastime. But even the youngest scramblers know that going too high would be dangerous, thanks to loose rocks. Most of the interesting features are near the shoreline anyway — including caves, huge rock pools full of life, and private coves to call your own for a day.

Should you find yourself at an impasse thanks to a shear wall, the only option in moving forward — getting wet — would be chilly during winter. While the currents on this side of the island are much weaker than the north, rock scramblers should always know and watch out for the powerful tide. Having one of the largest tidal changes in the world, this part of the ocean moves from high to low extremely rapidly.

Beach hop around the northwest. 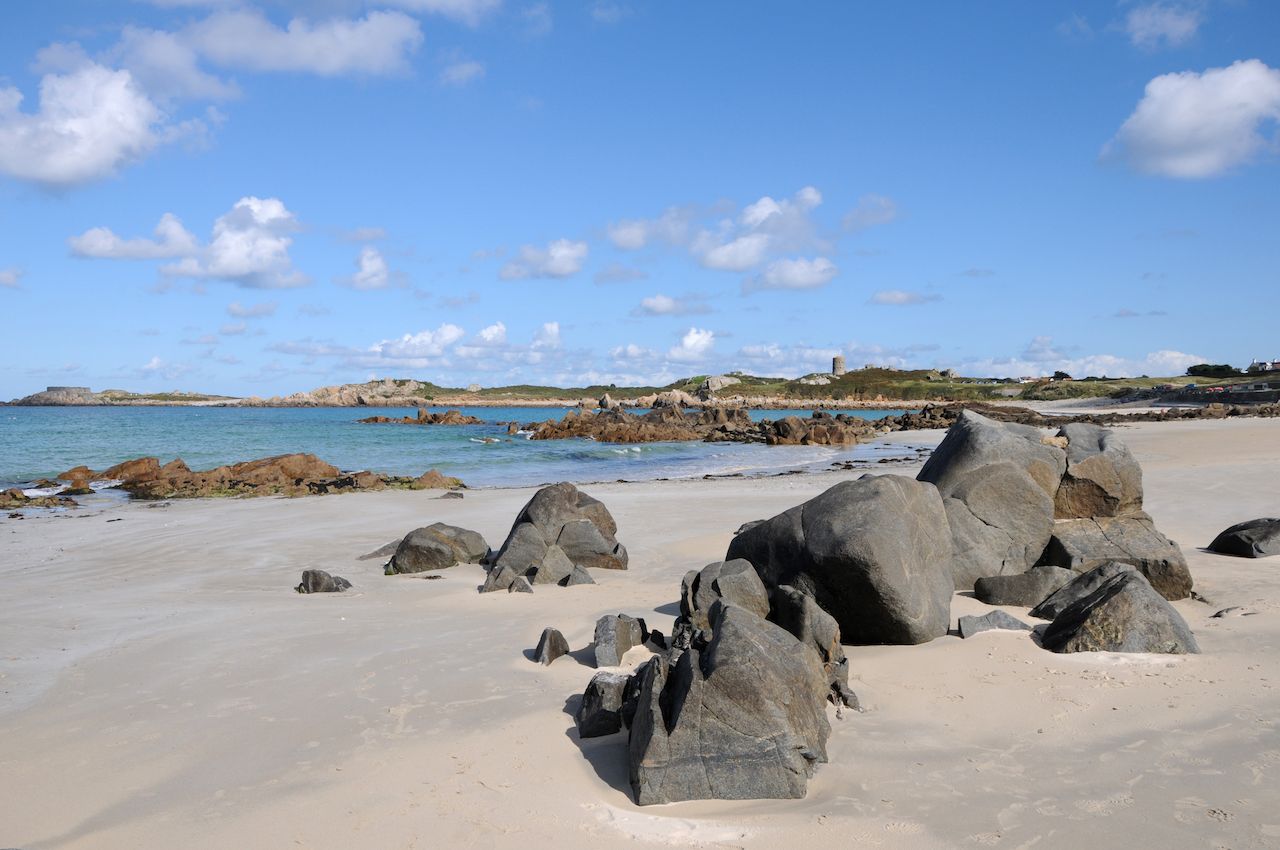 You can find easier hiking experiences in Guernsey’s northern flatlands. For a full day of exploring, start at the northeast bay in Bordeaux where you can watch the sunrise over the other islands of the Bailiwick. Following the coast north, you’ll stumble upon many medieval forts and World War II bunkers intact and ready for exploring. The rocky landscape eventually gives way to a 650-foot stretch of soft sands called Lancress, the perfect stop for picnicking or ordering lunch at one of the beachside cafes.

All of this adventure can be completed using little paths next to the ocean and roadside, which locals call “pavements.” Continuing to follow the coastal pavements, now heading southwest, you’ll wind your way through numerous tranquil beaches, communities of traditional cottage dwellers, and little fishing ports with vibrant boats bobbing in the water or resting haphazardly on the sand — a goldmine of photo possibilities.

Eventually, after a full day of exploring, you’ll make your way to Cobo Bay on the west coast. At the tiny town’s store, you can purchase a disposable grill and food for barbecuing on the beach or satiate your hunger with the best of British fish and chips — both of which can be found right on the shore. Either way, cross the road to sit on the sands and enjoy dinner as you watch the sun melt back into the waves. If you’re not tired after all of that, find Guernsey locals aplenty crammed into the island-famous Rockmount Pub for a pint of local Rocquettes cider.

Fish on the ormering tide. 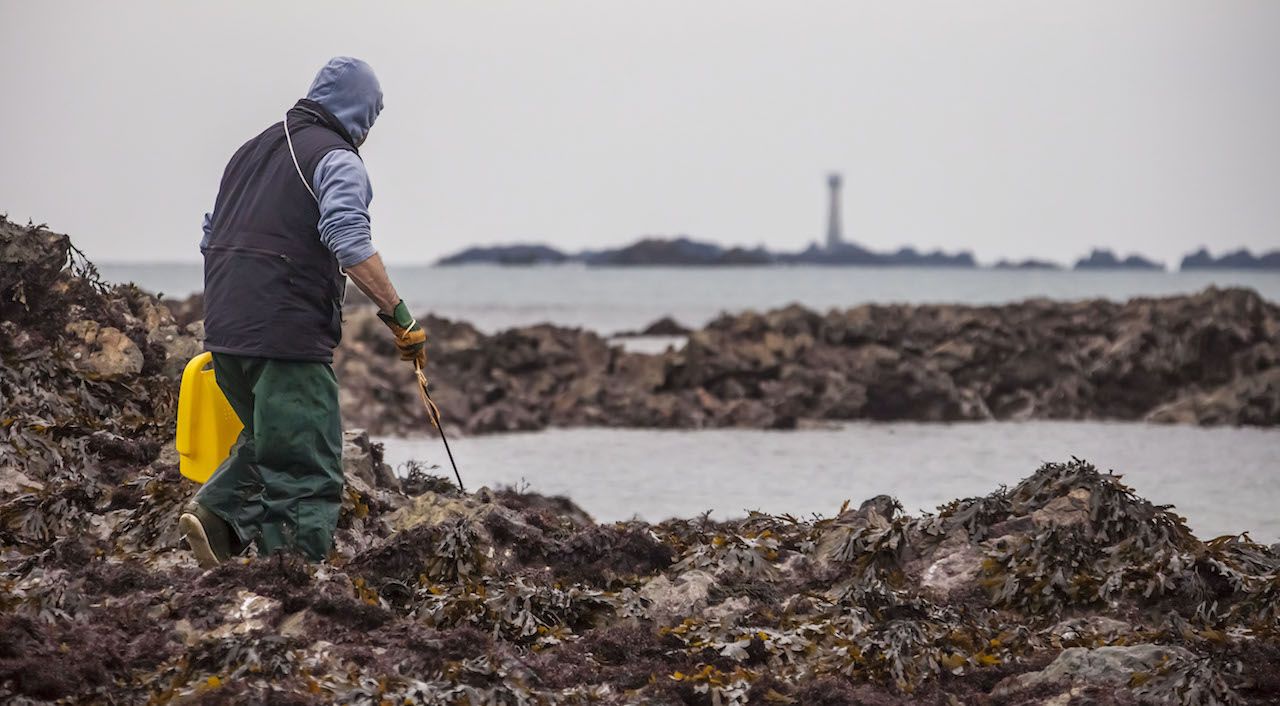 It’s a local fishing tradition that occurs only a few times a year when the epic thirty-three-foot tidal range reaches its peak. Local Guernsey folk scour the island’s low tide mark for a rather ugly looking mollusk that tastes a lot better than it looks. The fist-sized ormer suctions itself to the bottom of rocks and can only be pried away with a long steel hook that looks a lot like a crowbar.

Your perfect Guernsey meal at the end of a hard day of fishing would start with bean jar, a rich bean stew usually accompanied by Guernsey buttered crusty bread, followed by an ormer casserole. The meaty ormer is first fried and then bathed in a creamy onion gravy before being served on mashed potatoes. That’s all topped off by a piece of the toasted local delicacy, gâche mêlaïe, or sweet fruit bread, perhaps smothered in local raspberry jam.

At first glance, this grassroots music festival may seem a tad intimidating. After all, it’s organized by the island’s burly, leather-vest-wearing, motorcycle club members. But, in truth, the June event is a spectacular weekend-long arts extravaganza organized by the people for the people. Its location on the edge of the south coast cliffs of Pleinmont is touted as the most breathtaking in the world, and attendees are given the option of waking up to these incredible views by camping in the neighboring field. 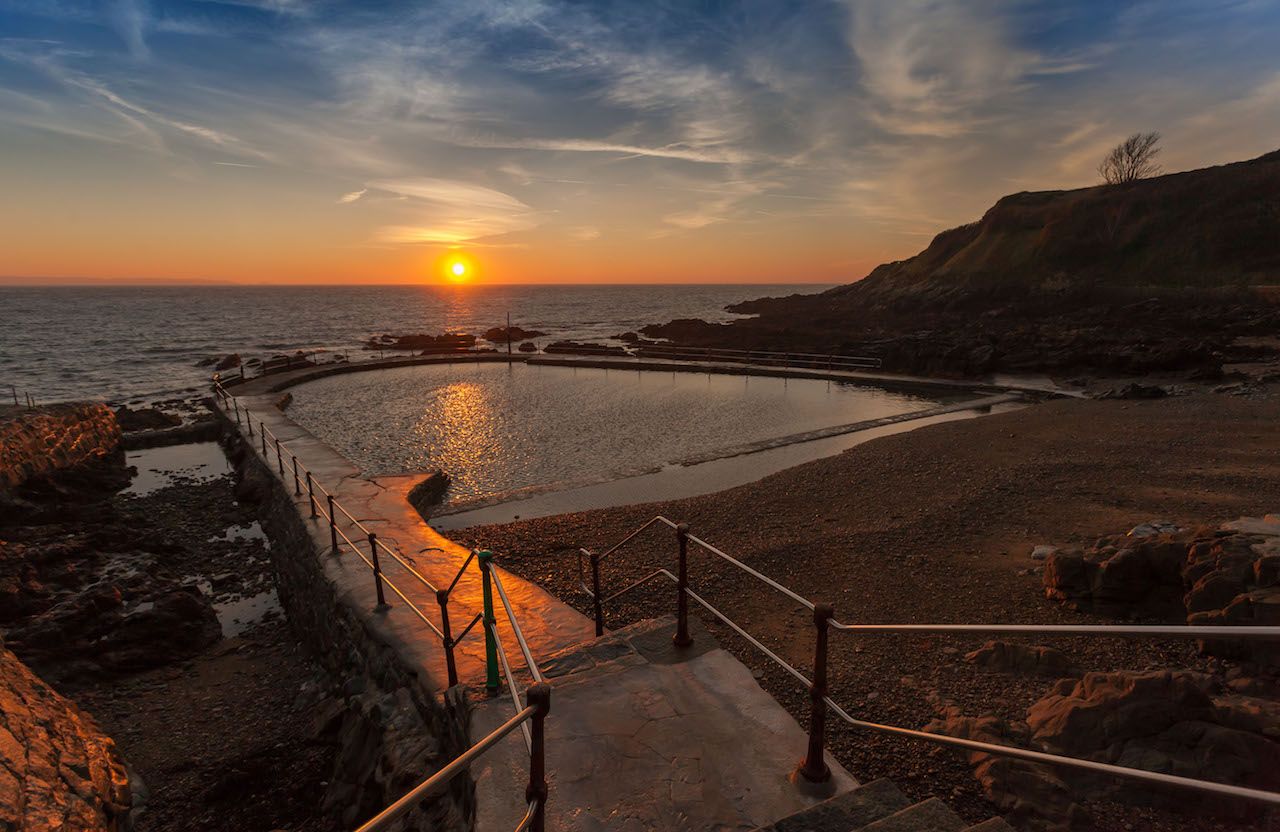 The La Valette pools are two man-made pools crafted into the coastal rocks and refreshed at high tide. They’ve been a Guernsey “must” for decades. Even French author Victor Hugo swam in these very pools in the 1800s. His house, where he wrote Les Miserables, is less than a mile up the hill, still as he left it and accepting visitors 150 years later. For a real summer morning treat, get to the bathing pools for a dawn dip and witness the sun exploding into life over medieval Castle Cornet. 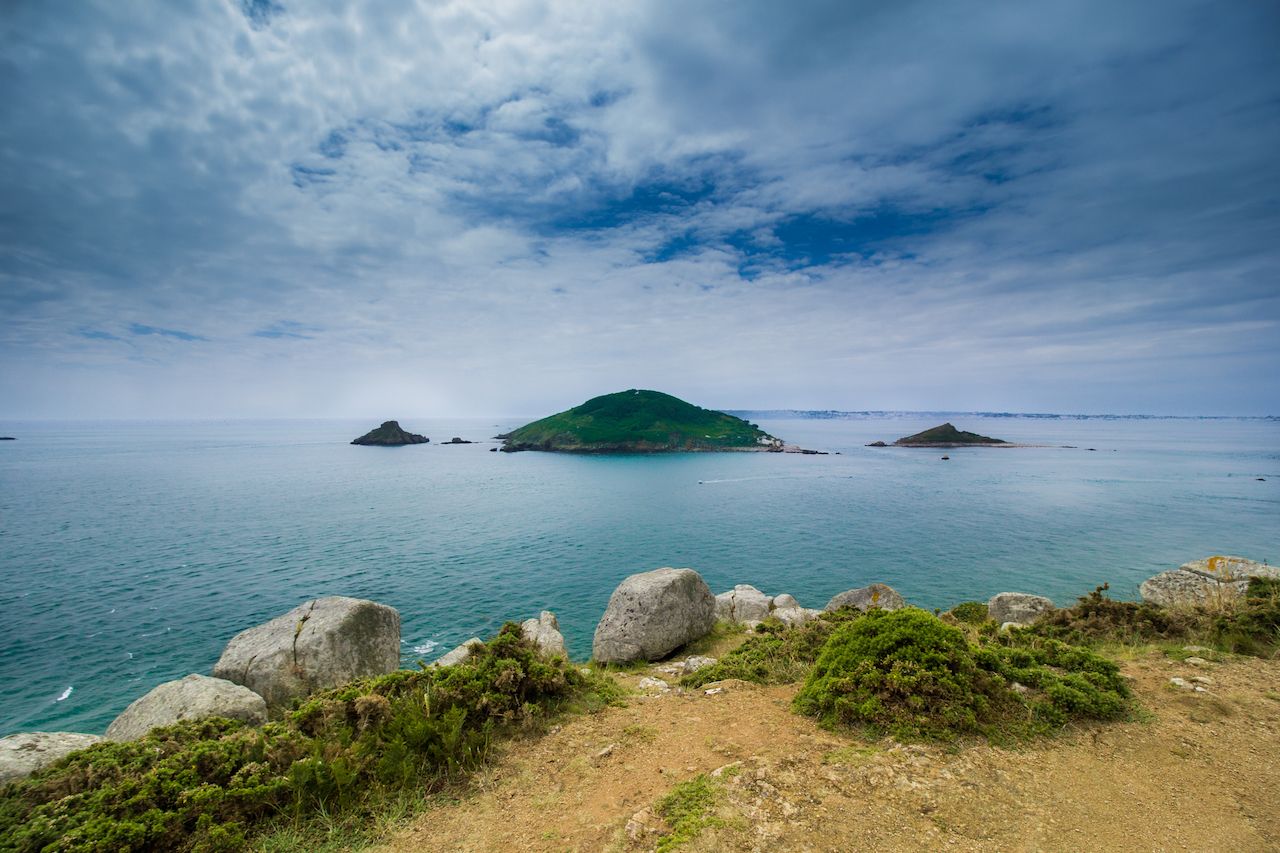 Although there’s enough on the island of Guernsey to keep you busy for over a week, there’s also a whole bailiwick of beautiful islands well worth your time. The best way to access their natural wonders is by spending a night or two camping. On the tiny isle of Herm, the Seagull campsite is set atop a 130-foot cliff with commanding views over the often-raging ocean towards Sark island, which has its own cliff-top campground. Sark’s La Valette campsite looks out over an endless sea and has the added benefit of being on the world’s first “dark sky island,” making it an incredible spot for stargazing. If easy access to a beach is what you’re after, head to the Saye Campsite on Alderney Island, located just across the road from faultless Saye Beach.

Exploring the carless island of Herm. 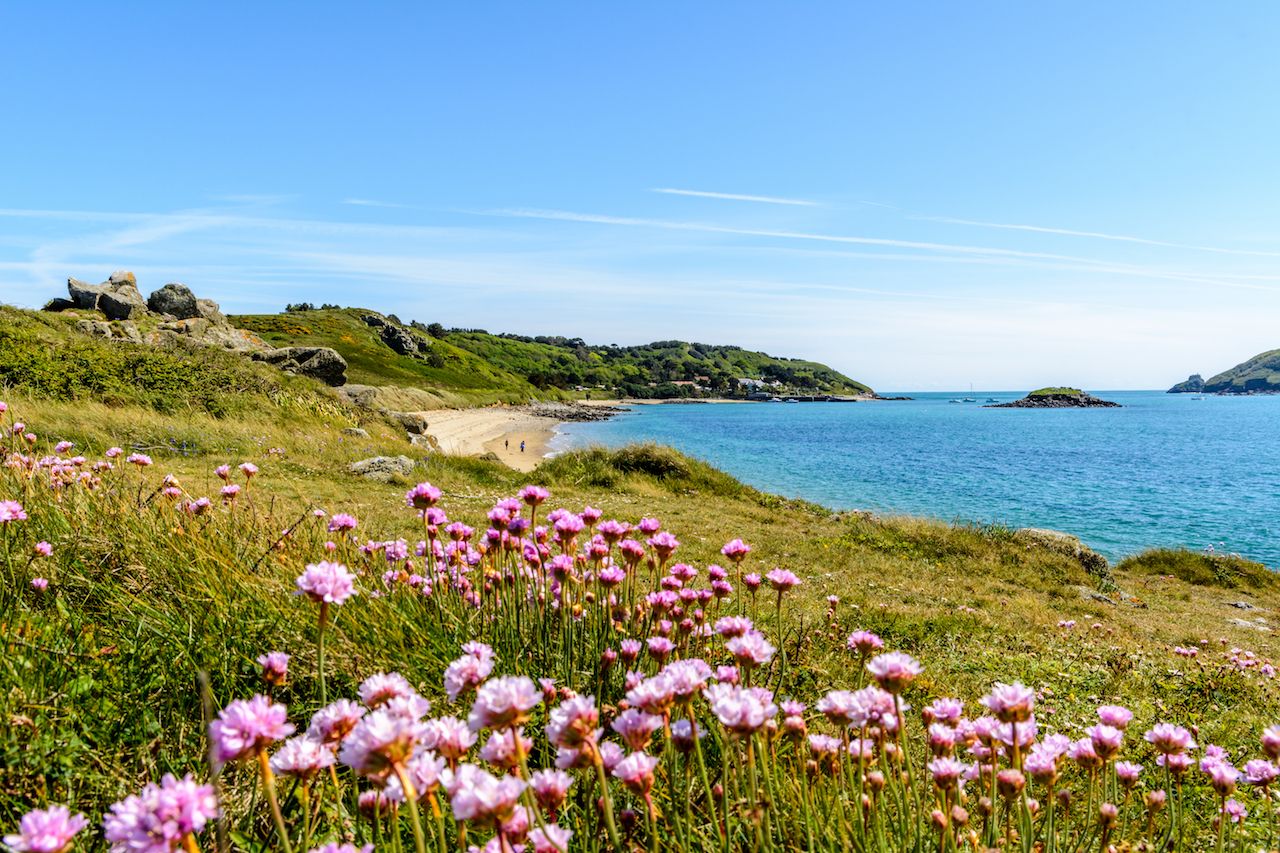 The closest neighboring islet, Herm, is accessible with a regularly departing 40-minute ferry ride, often accompanied by dolphins breaching at the bow. This one-mile emerald droplet is almost entirely vehicle-free — apart from a farming quad and tractor — but can easily be circumnavigated on foot in about an hour. The terrain is a mixture of northern lowlands comprising popular spots like Shell Beach and Belvoir Bay, luscious green grass commons, brilliant white-sand dunes in the north, and 130-foot hilltops in the southeast. This slow-paced paradise isle, with its lack of pollution or population, is a top summer choice for many Guernsey locals — yet, even on its busiest of days, you can find a private patch of sand.

Go back in time on a tiny island. 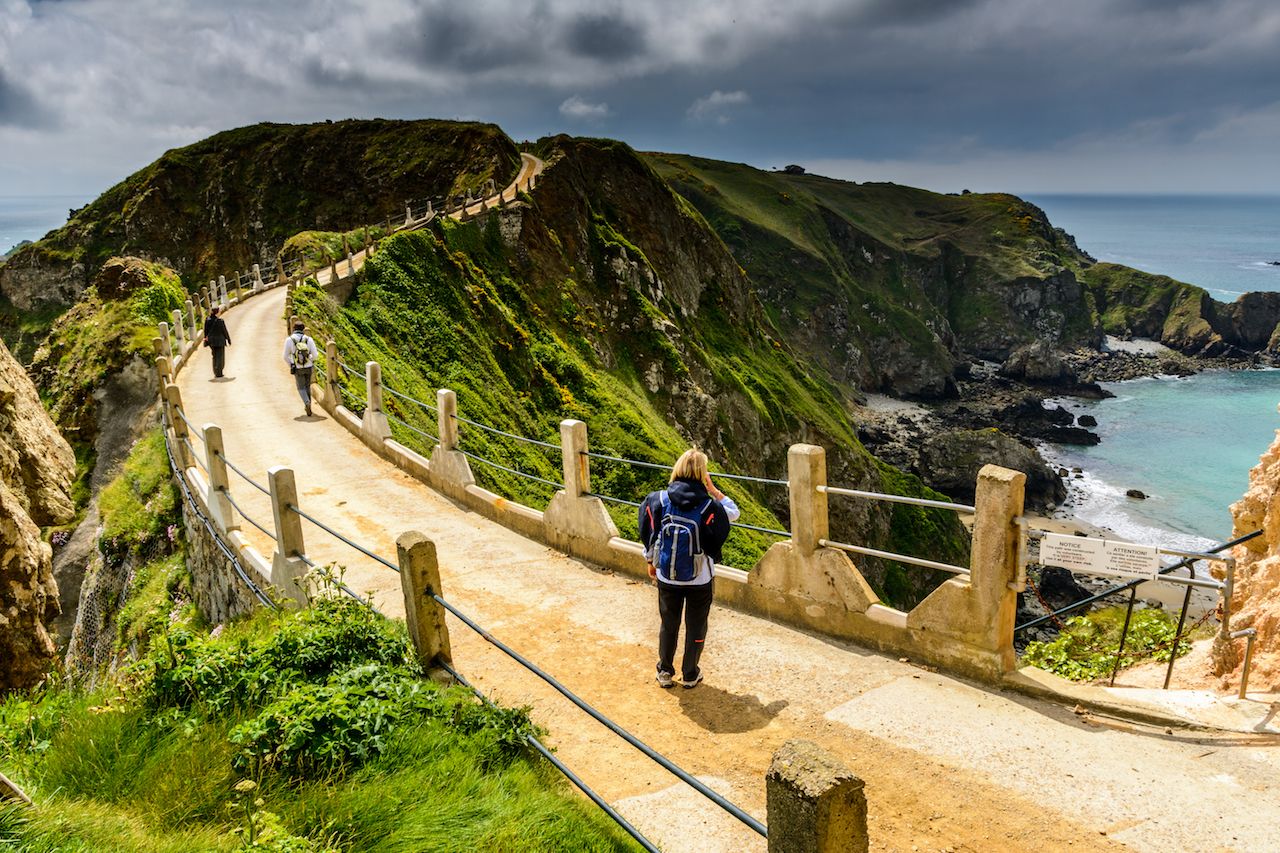 Forty minutes after departing Guernsey on the ferry, you’ll likely be wondering how you’re going to penetrate the apparently impregnable island looming ahead. Eventually, the ship sails around the all-encompassing cliffs and into a small natural harbor where visitors are granted access to the land that time forgot. Very little has changed on Sark over the past hundred years. Its quaint village is an epicenter of snug cottages that sparsely scatter into a rolling countryside topped with clumps of fairytale forests. The surrounding cliffs have gems of their own that you have to climb to reach, such as the impressive Gouliout Caves, Derrible Bay, or the Venus Pools — a natural pond of seawater deep enough to swim in. If you don’t want to hike, you can rent a bicycle in town. Like Herm, you’ll find no cars on Sark. Here, the horse and cart still rules supreme, functioning as the island’s taxi service.

Slow down on laid-back Alderney. 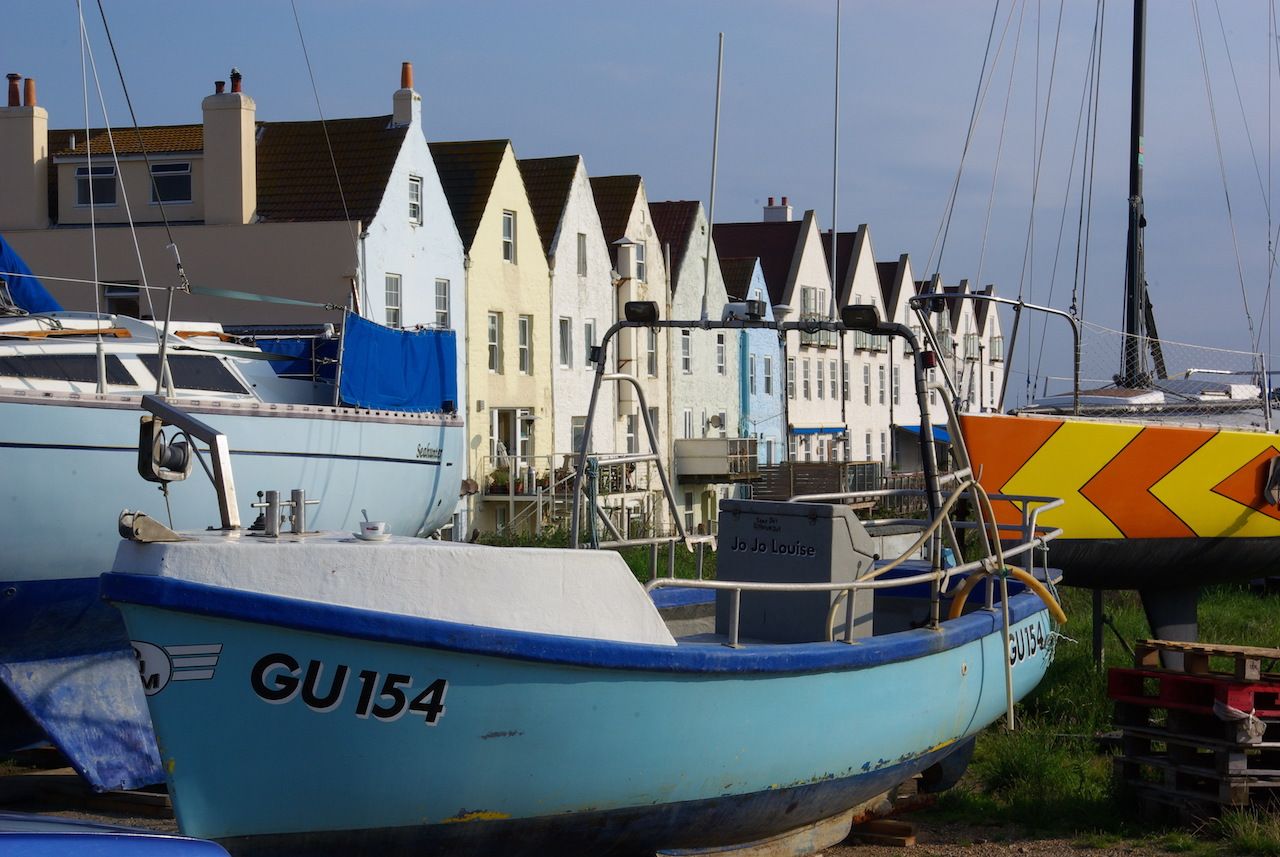 The second largest island in the Bailiwick is a world onto its own, best described with one word: whimsical. It’s where cobbled streets are flanked by colorful traditional shop fronts below townhouse dwellings. The only port in town almost always seems deserted until you open the door to one of its taverns, where you’ll find characters as colorful as some of the homes outside. With nearly five pubs and taverns per square mile, there’s little chance of running dry on Alderney — but you’ll rarely find a party on this sleepy island. To see it at its craziest, visit during mid-August for Alderney Week, a rambunctious carnival of music and frivolities that has been filling the town to the brim for 70 years.

Trip PlanningThe most amazing islands in Italy you’ve never heard of
Tagged
Beaches and Islands Trip Planning England, United Kingdom
What did you think of this story?
Meh
Good
Awesome

The best Airbnbs in Manchester, from a luxury yacht to a renovated bank vault

How to construct the perfect English breakfast with just 7 foods