Bermuda may be best known for its pink beaches, turquoise waters, tropical climate, and dangerously strong rum swizzles, but the British Territory has one more selling point hidden underground.

About two million years ago, most of the planet’s oceans froze in the early stages of the Pleistocene era. With more water frozen in ice, the sea levels dropped, and the above-ground part of Bermuda was a lot larger than it is today. During that period, rainwater slowly seeped into the earth, eventually dissolving and eroding the rock enough to form caves.

Of course, sea levels always rise when an ice age ends, and many of the best Bermuda caves are now underwater (and excellent sites for avid scuba divers to explore).

But you can still explore many of the best Bermuda caves on land; it’s truly like entering another world. Bermuda’s caves have inspired the creative minds of famous authors like Mark Twain and Jim Henson, who based his idea for the 1990’s TV show Fraggle Rock on a visit to Bermuda’s Crystal Caves.

With around 150 caves on the island, travelers can visit a few at their leisure or book guided tours to learn about the geology and development of stalagmites, stalactites, columns, and other formations. 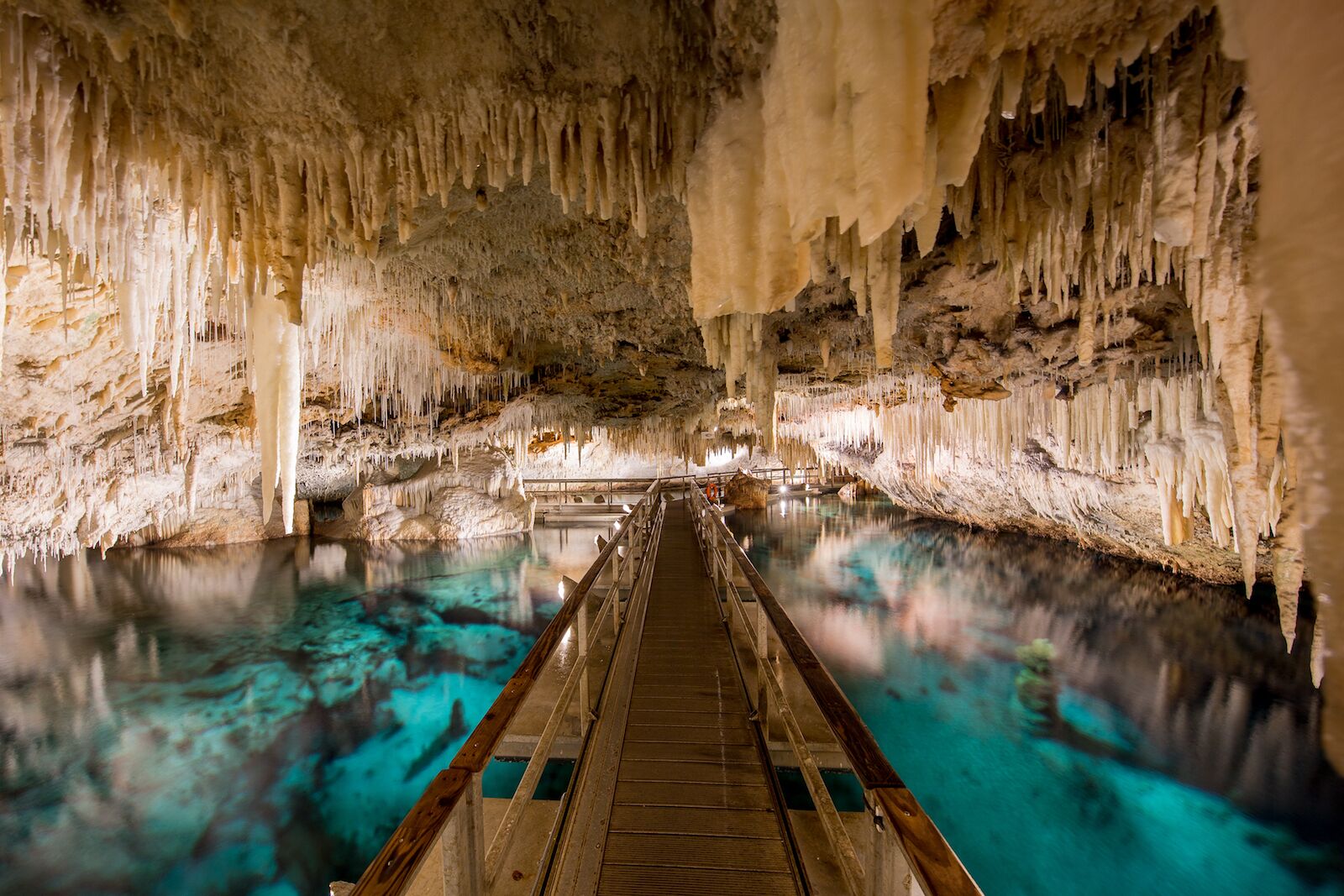 The most well-known cave in Bermuda is Crystal Cave, although it’s actually two caves — Fantasy Cave is steps away, but people refer to the area as “Crystal Caves.” These Bermuda caves slowly formed to create the underground natural wonder over millions of years. And they’re simply stunning. The same turquoise water that laps the island’s pink-sand beaches extends into its caves, where pearl-colored stalactites hang over the clear underground lake.

Tours begin with a descent into the cave, so you’ll need to be able to manage up and down 81 steps. The steps can be a little wet and slippery, so listen to the guides when they tell you to take it slowly. As you move through the caves, your guide will share stories about the caves’ accidental discovery by two young boys in 1907. The kids were playing cricket when they lost their ball, and when they found it in the grass, they noticed a slight breeze rustling the blades. They soon located a small crack in the ground, and upon further exploration, it was clear they had found something magnificent.

Tours of Crystal and Fantasy caves run daily from 9 AM to 5 PM. Ticket prices start at $24 for adults and $10 for kids.

On Harrington Sound Road in Hamilton Parish, near the Crystal Caves, is Leamington Cave, with several rooms with stalagmites and formations. The caves are known for their saffron-colored formations caused by iron oxide seeping through the rock.

However, when it comes to visiting, things get tricky. The cave’s property used to house a restaurant, but it closed nearly 20 years ago, shuttering access to the cave. However, a local couple recently bought the land and occasionally host public events and dinners. Check with your hotel concierge while you’re there to see if any events are happening during your stay. 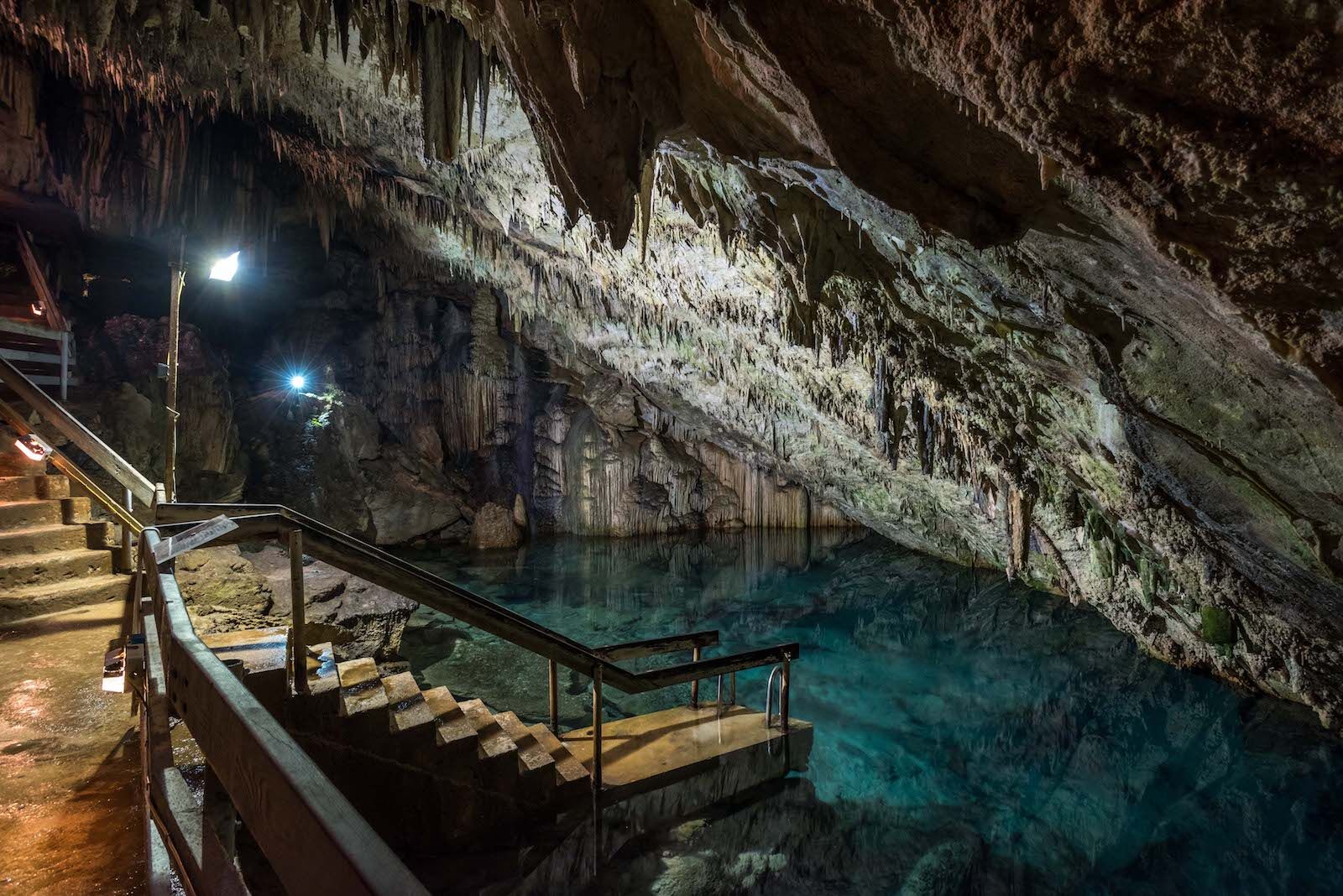 The subterranean lake is nearly 30 feet deep, with clear water surrounded by hanging crystalline, mineral-packed dripstone. You can even take a dip, cooling off in the water beneath the stalactites and stalagmites. Unfortunately, this one is only open to guests of the on-property hotel, Grotto Bay Beach Resort, so consider booking a night there if exploring Bermuda caves is the top item on your vacation agenda. 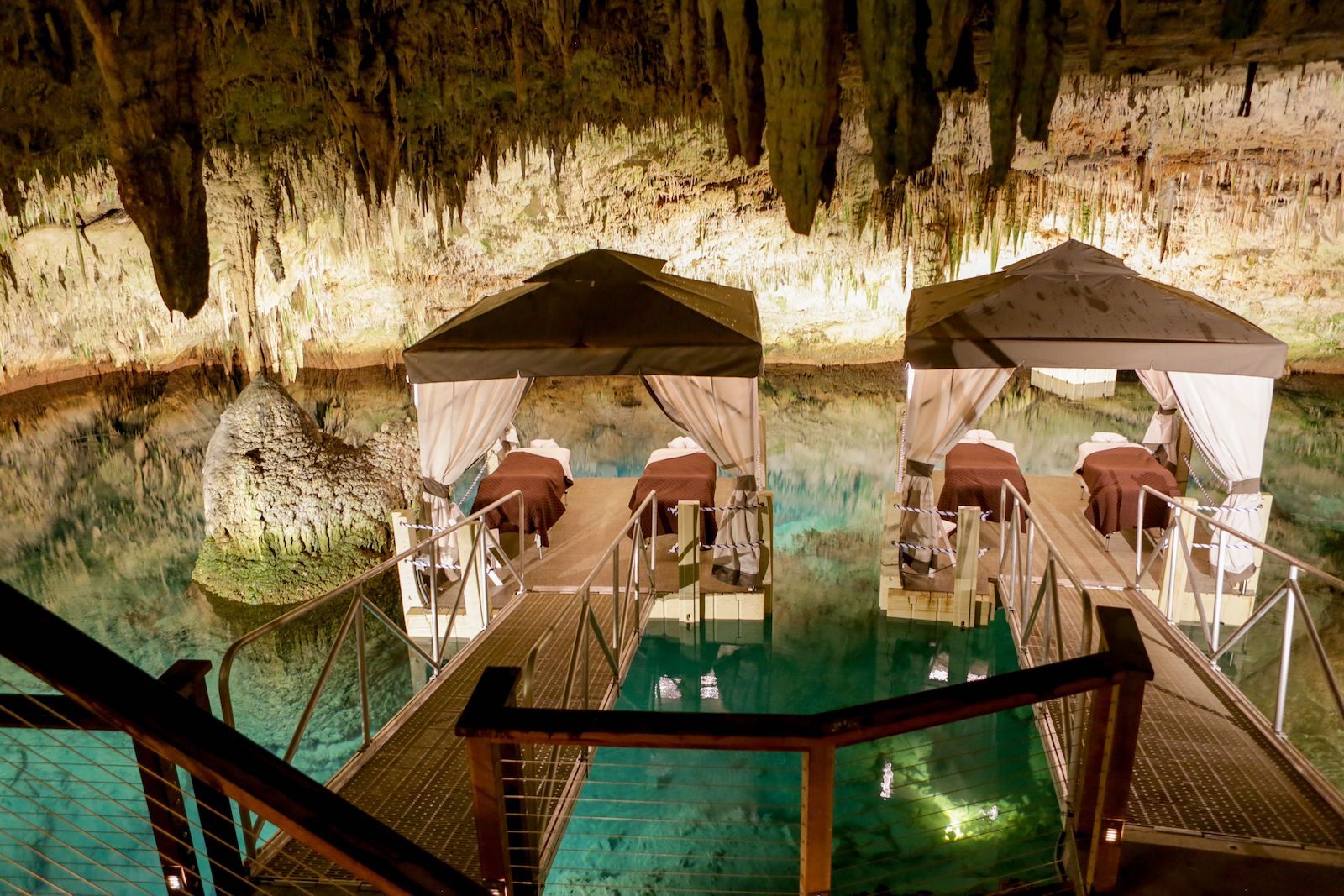 In an interesting use of natural space, Grotto Bay Beach Resort turned Prospero’s Cave into a spa where guests can get massages, facials, body wraps, and more on a floating platform within the cave. In addition to background music, you’ll enjoy the soft sounds of water dripping and echoing. There’s also an indoor lounge area a bit removed from the treatment platforms where you can relax before and after treatments.

Unlike Cathedral Cave, you don’t need to be a hotel guest to visit, but you do need to make a spa appointment. Try to book as far as possible in advance to ensure space in the cave is available — otherwise, you’ll have an outdoor massage on the hotel’s tropical grounds.

The Spittal Pond Reserve is in Bermuda’s Smith’s Parish area and is the largest protected area on the island at 64 acres. Since the nature preserve covers the rocky coastline, it should come as no surprise that there’s a cave system hidden below the surface. Jeffrey’s Cave is named for a slave (named Jeffrey) who hid in the Cave for over a month before escaping the island by ship. You can’t go into the cave, but you can peer down into the entrance — it’s amazing to think someone was able to safely scramble down and hide in it for so long.

5. The caves at Blue Hole Park

One of the easiest caves to find is Causeway Cave in Blue Hole Park, part of the Walsingham Nature Reserve (known locally as Tom Moore’s Jungle). The reserve has several wet and dry caves in addition to bright blue lagoons, wildlife, and lush flora. Blue Hole Park has several caves open to guests, including Causeway Cave, which is free to enter (and near the smaller of the park’s two eponymous blue lakes).

There are a few other caves in the area as well, some of which have open roofs or collapsed walls and are viewable from above ground. Ask for directions (there are many paths and ways to get from Point A to Point B) to Walsingham Cave, a large cave with an underground swimming area. You may want to bring a flashlight as the cave is quite dark inside.

Where to sleep and eat in Bermuda

Aside from Grotto Bay Beach Resort, a good choice for exploring the island is The Loren at Pink Beach, a luxury boutique hotel in the central part of the island. Rooms have ocean views and the beach access is fantastic.

The Loren’s Pink Beach Club is a lovely outdoor restaurant on the water with sustainable seafood; make a reservation regardless of whether you’re staying at the hotel. If you visit Blue Hole Park, you may want to swing by The Swizzle Inn Pub and Restaurant. It’s the oldest pub in Bermuda and famous for – as the name may suggest – rum swizzles. And near St. George is the old-school White Horse Pub & Restaurant on the water. It’s a low-key place for a local beer or great cocktail, but it’s near the cruise ship terminal, so expect a crowd if there’s a large ship in port.

Everything You Need To Know About Visiting Bermuda This Summer