While nomadic communities of yurt-living, horse-riding sheep herders are still thriving in the most remote valleys of Kyrgyzstan, the capital city shows a different facet of this little-known nation. Built from scratch during the Soviet era, Bishkek is packed with a well-preserved collection of modernist concrete experiments. Although the country gained independence from the USSR in 1991, the ferro-concrete modernist buildings and architectural oddities that have characterized the Soviet era can still be admired today in all their brutal glory. Here are 14 of the most unique ones. 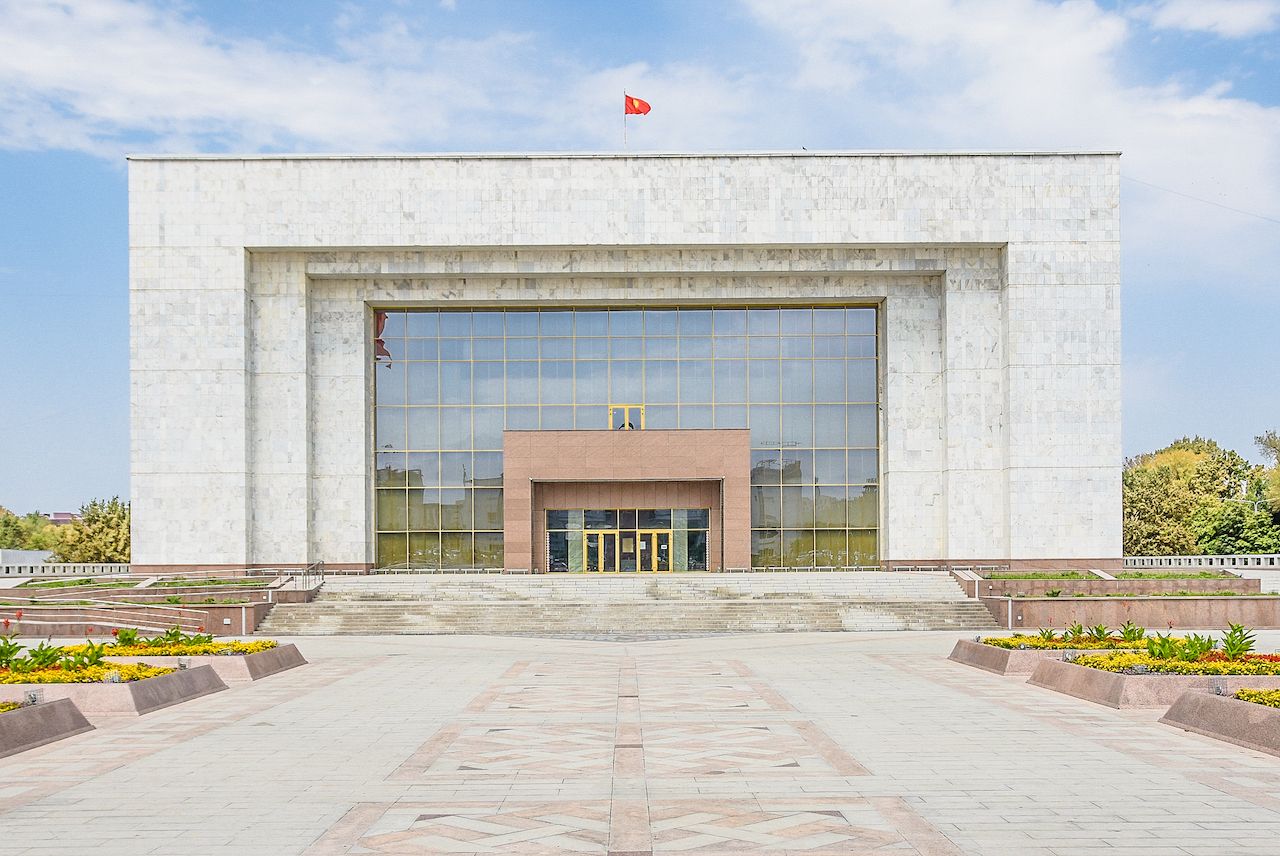 Marking the heart of the city, Bishkek’s State History Museum is a fine example of neo brutalist architecture. Formerly known as the Lenin Museum, the structure was far from welcome when construction began. Many local architects and planners were opposed to placing a museum dedicated to the Russian revolutionary in the middle of the city, but after accusing them of anti-communism, Moscow prevailed and started the project. A large statue of Lenin was standing in front of the entrance until 2003 when it was moved to a less-visible location behind the museum. Completed in 1984, the cubic white building hosts a large collection of socialist realist art, including bizarre murals. At the time of writing, the museum is closed for renovation, with the reopening date still unknown. 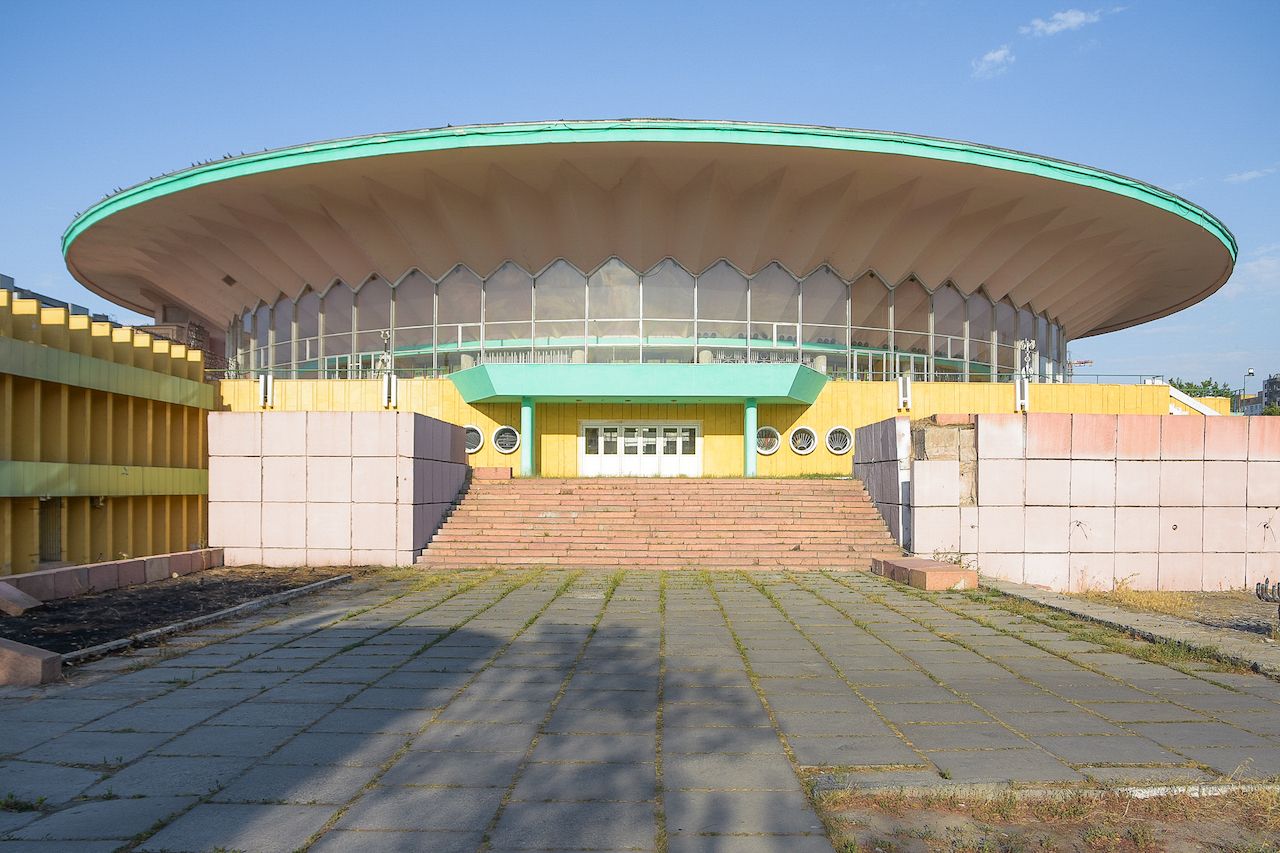 Built in 1976, the Bishkek Circus looks like a giant flying saucer that just landed in the northeastern part of the city. Before the Russian Revolution, acrobats, clowns, and stuntmen were mostly performing for the entertainment of the aristocracy, but after 1917, circuses were nationalized and made accessible to the general public. Buildings similar to this one — like the Kazakh State Circus in Almaty or the Kharkiv State Circus in Ukraine — started appearing in all the major cities of the USSR, playing an important role in the propagation of culture in Soviet times. This bright yellow and green specimen is no exception, although a decade ago it received an unusual amount of international attention for all the wrong reasons: In 2009, a brown bear killed the circus administrator during the rehearsal of the popular “ice-skating bears” show. 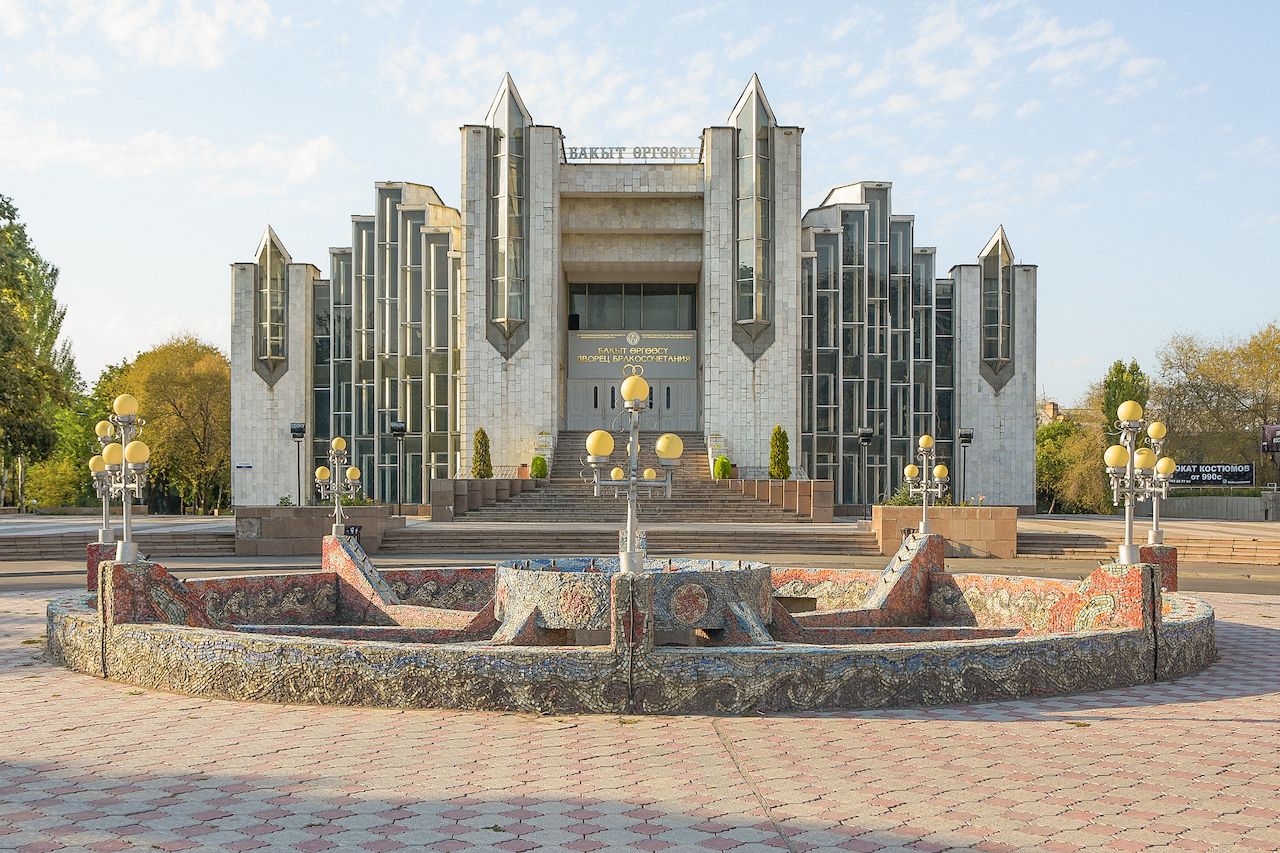 The teachings of Karl Marx were pretty clear when it came to faith (“religion is the opiate of the masses!”), and the USSR was quick to decide churches had no place within its borders. Shutting down places of worship, however, didn’t mean that people could not have a grandiose palace to get married in. Together with museums of atheism, state-run wedding palaces started appearing in every major Soviet city. This 1987 marble-clad structure — with its sharp angles, tall windows, and futuristic shape — still hosts ceremonies today. 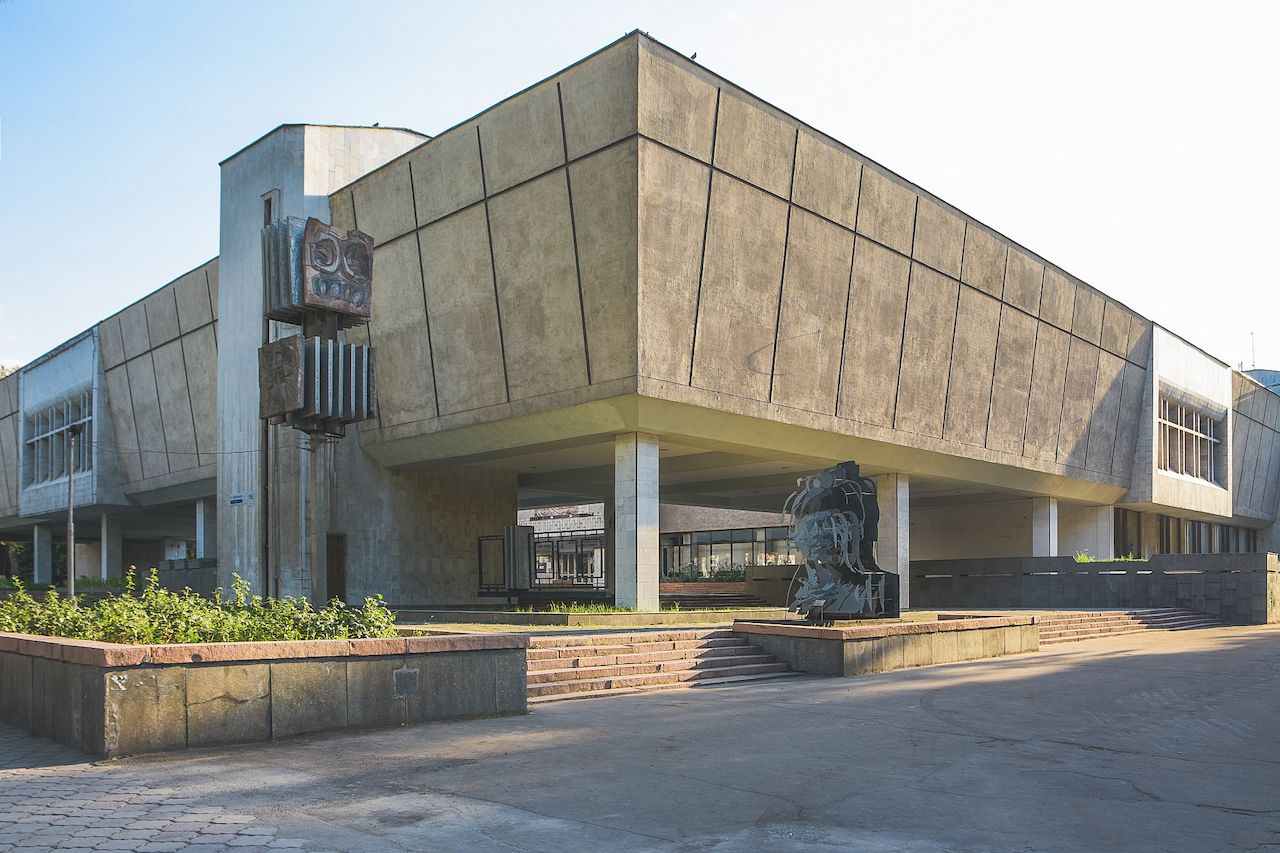 In the process of renovating the city in the 1970s, new spaces were devoted to both high and popular culture. The State Museum of Fine Arts, completed in 1974, was one of the three major cultural institutions, together with the Lenin and the Frunze museums that opened in that period. Its unpolished surfaces will satisfy fans of raw concrete structures. The Fine Art Museum is still active, displaying a large collection of paintings, sculptures, and rugs. 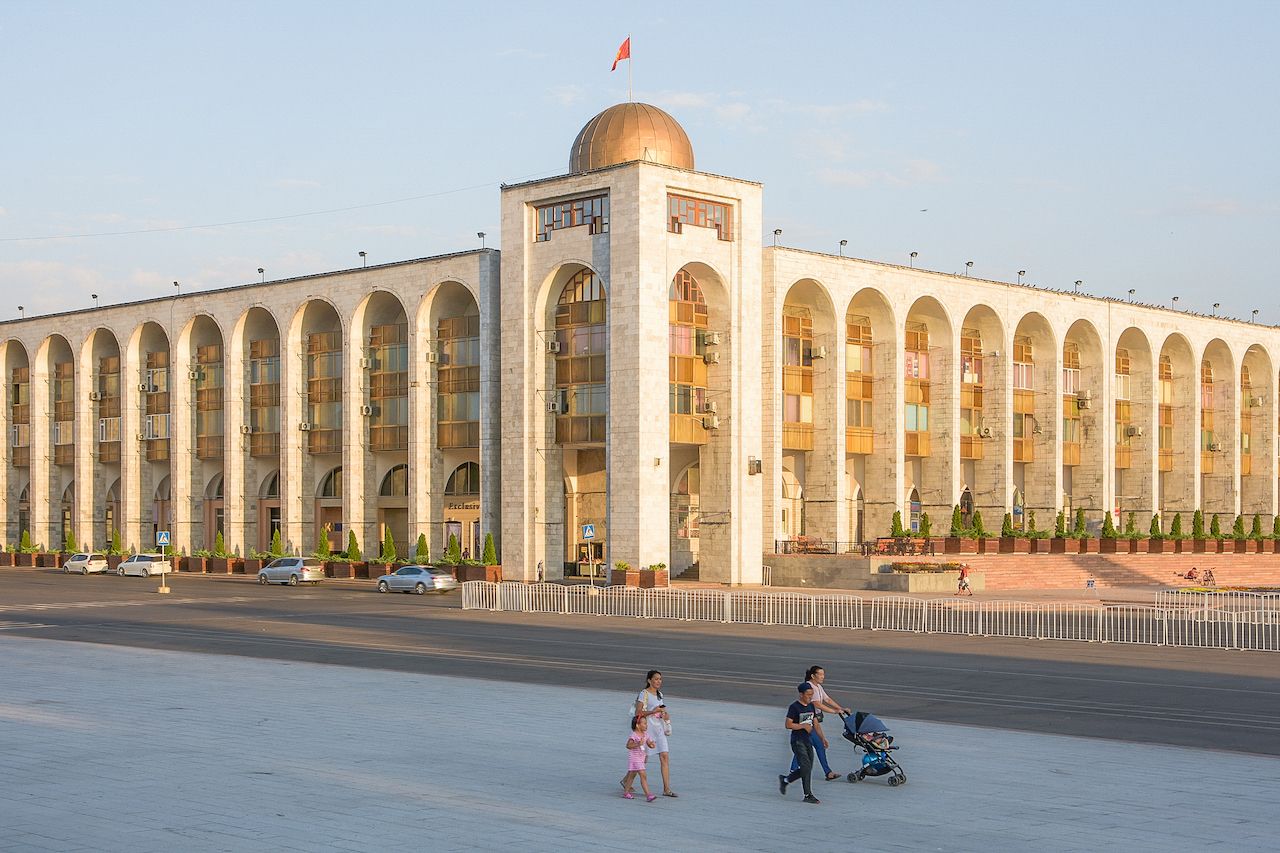 In 1926, the city changed its name from Pishpek to Frunze (until 1991 when it was renamed Bishkek) to honor Kyrgyzstan-born Bolshevik commander Mikhail Frunze. As Frunze was developing into a proper socialist city in the 1960s, Soviet urban planners agreed that it was missing one essential feature: a public square worthy of its name. The Old Square characterized by a statue of Marx and Engels had been used for official ceremonies, but the Usubaliev government (1961-1985) desired something grander.

Ala-Too square was one of the most ambitious projects that was undertaken at the time, changing radically the shape of the city. It was designed to overlook the Tien Shan mountains and include two new buildings, the Lenin Museum and the White House. Unfortunately there was an issue: It was too big and empty. It was impossible to fill during national celebrations, which did not reflect well on the government, and it was becoming the perfect space for protesters to gather and voice their political concerns. When Bakiyev became president in 2005, fountains, memorials, fences, and flowerbeds appeared on Ala-Too, making the square protest-proof. 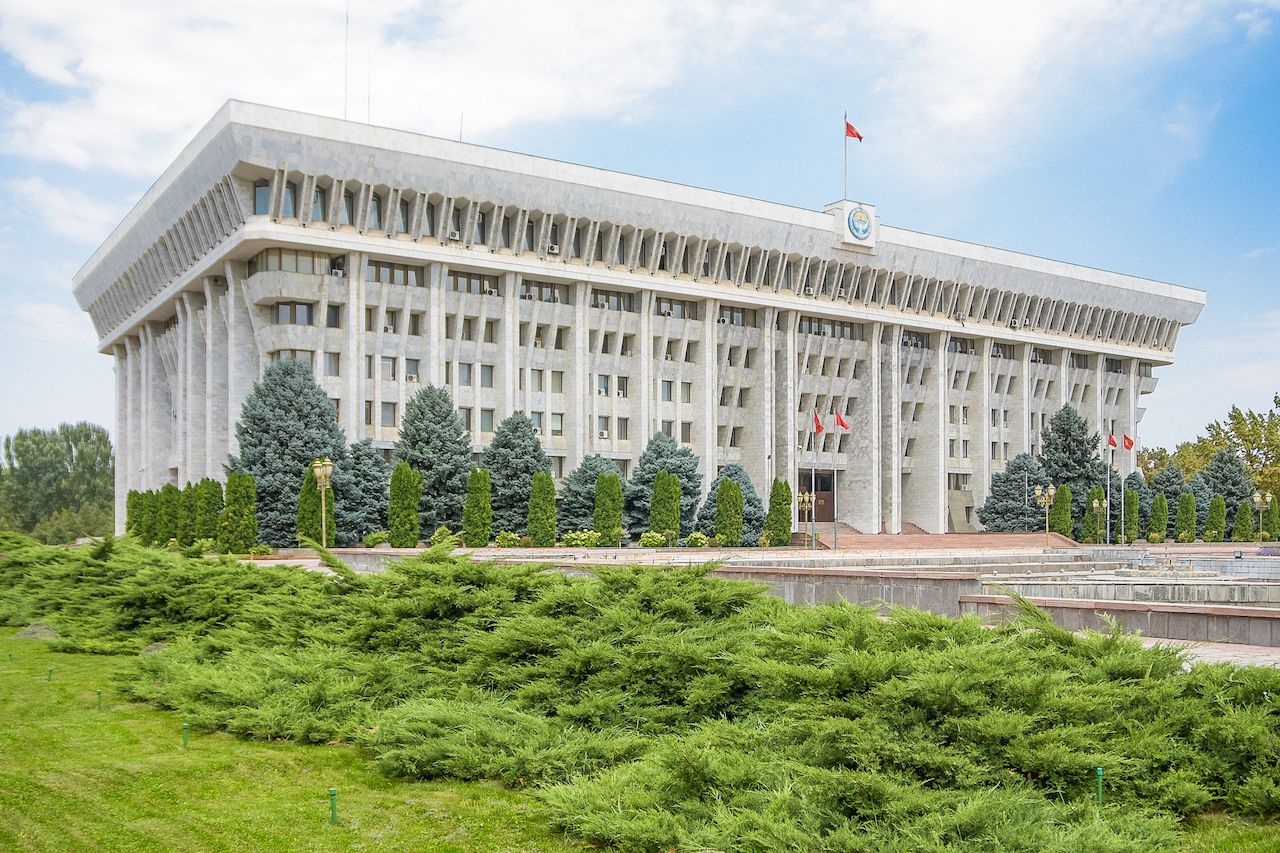 Bishkek’s Presidential Palace, better known as the White House, sits steps away from the History Museum on Ala-Too square. Built in a neoclassical style inspired by Stalinist architecture between 1977 and 1984, it housed the Central Committee of the Communist Party. The recent history of this building is as dark as you’d expect such a dystopian structure to be. In both 2005 and 2010, it was the site of violent anti-government riots. 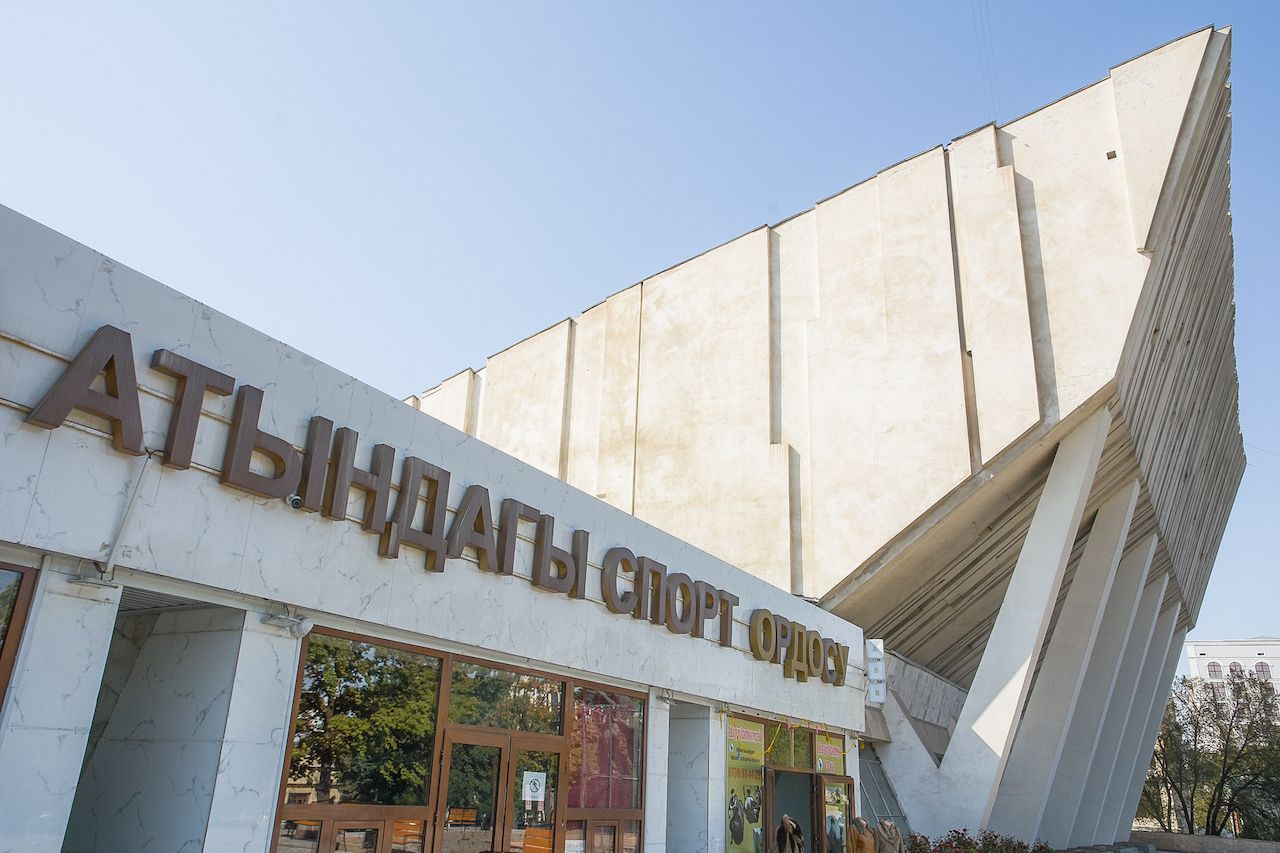 The 1974 Sports Palace, with its oblique, angular shape offered a space for leisure in growing Frunze. In front of the complex is the massive statue of local hero Baatyr Kaba Uulu Kozhomkul, known in the national mythology for its impressive strength. The statue placed at the entrance of the palace portrays the man carrying a horse on its back. 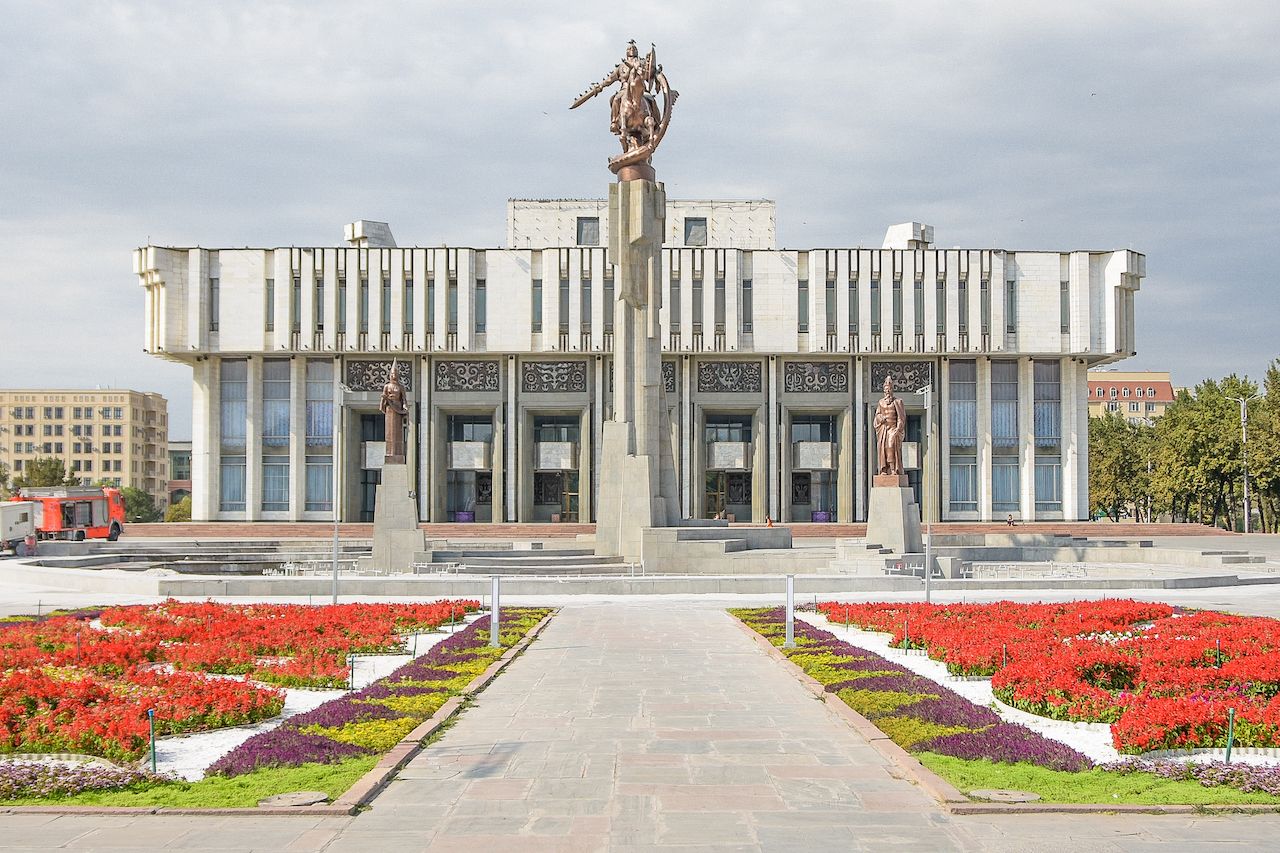 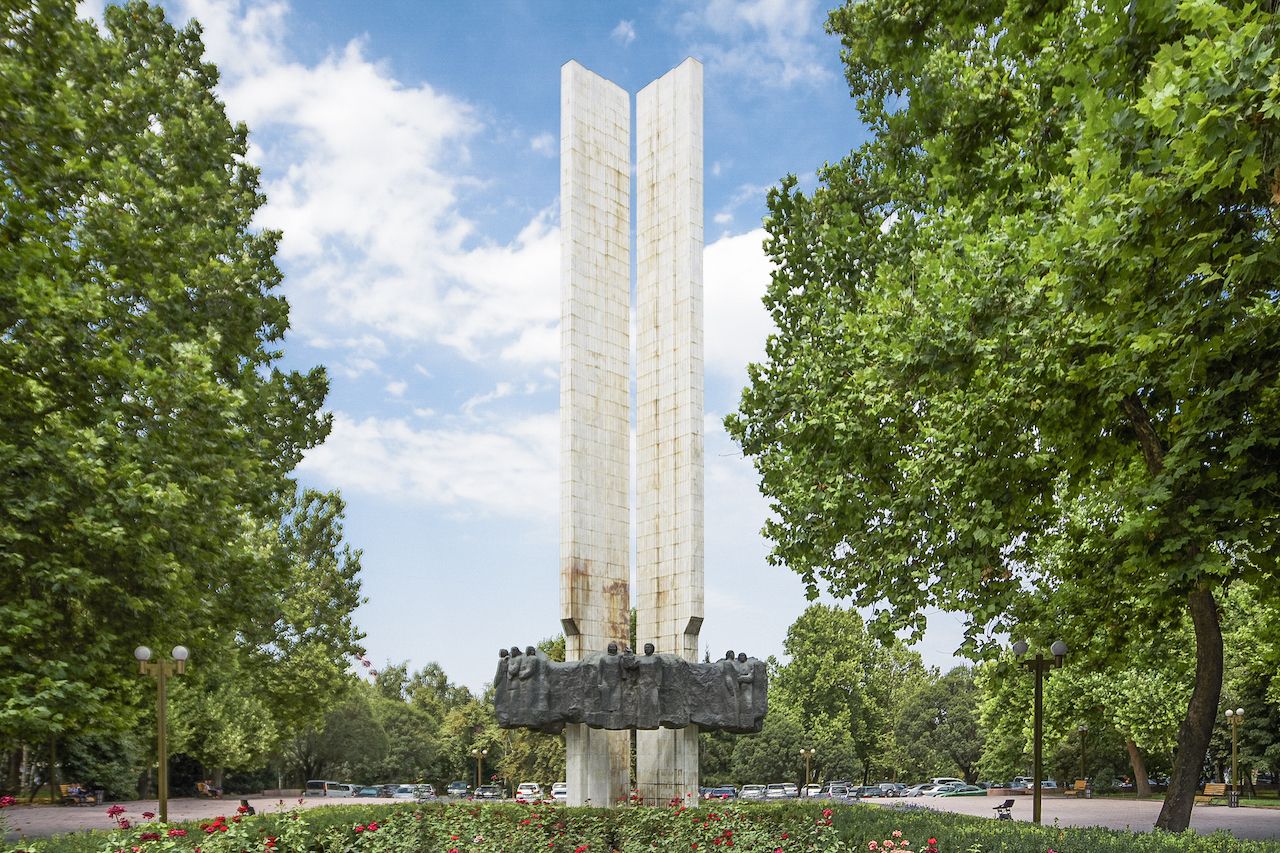 The white marble monument erected in 1974 to celebrate the 100th anniversary of Kyrgyzstan’s “friendship” with Russia rises high towards the sky between the White House and the National History Museum. Before 1874, Kyrgyzstan was under the control of the Khanate of Kokand, but by the end of the 19th century, the Russian Empire had successfully occupied and annexed the territory. Four decades of Tsarist rule resulted in the 1916 Central Asian uprising, one of Kyrgyzstan’s bloodiest revolts still remembered 100 years later. Surrounding the two towering pylons is a ring of Kyrgyz and Russian people symbolicaly united forever. 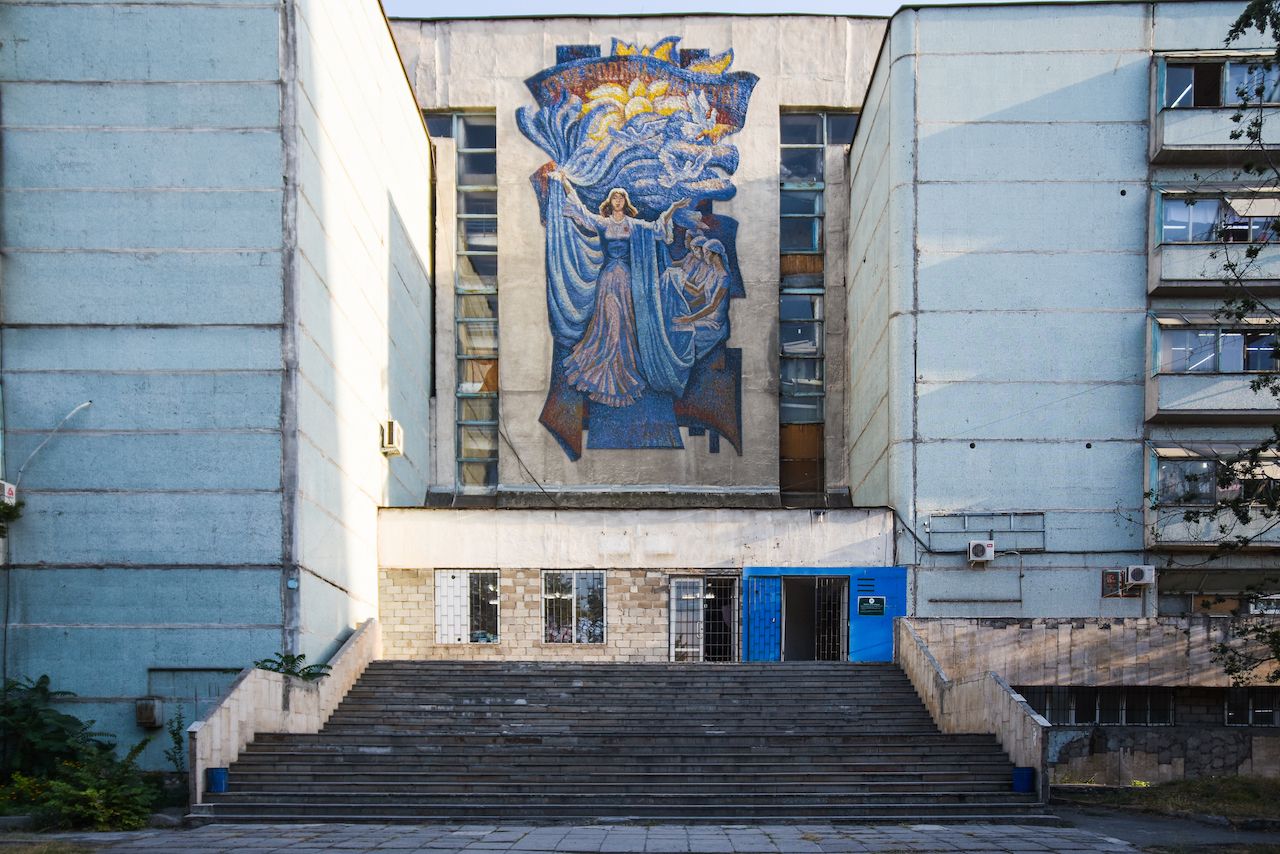 Murals and mosaics have played an important role in the development of Soviet culture since the 1930s. Monumentalist art decorating the walls of residential blocks, government buildings, and factories colored the cities of the 15 republics. Public artworks of this kind are often associated with propaganda because of their use of positive, inspiring messages meant to reinforce the communist ideology, but not all compositions are ideology-inspired. The mosaic in the picture is found at the entrance of a large textile factory on Jibek Jolu, one of the most trafficked streets in Bishkek. The writing at the top says, “Our work is for you, Motherland!” 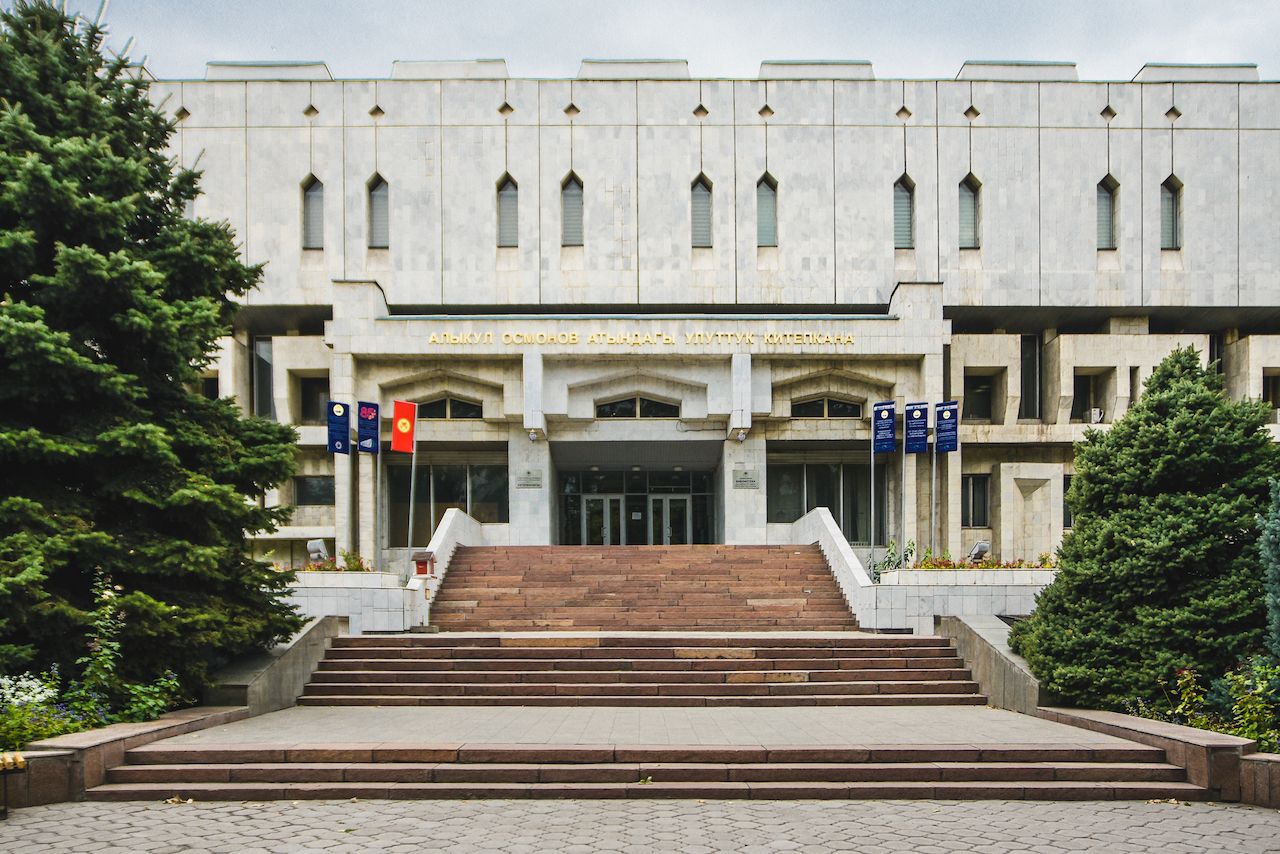 The Kyrgyz National Library is among the more imposing buildings in central Bishkek. A National Library has existed in Kyrgyzstan since the summer of 1934; however, it was only in 1984 that it moved into the current building. The cultural institution was known as the Lenin Library until independence in 1991. 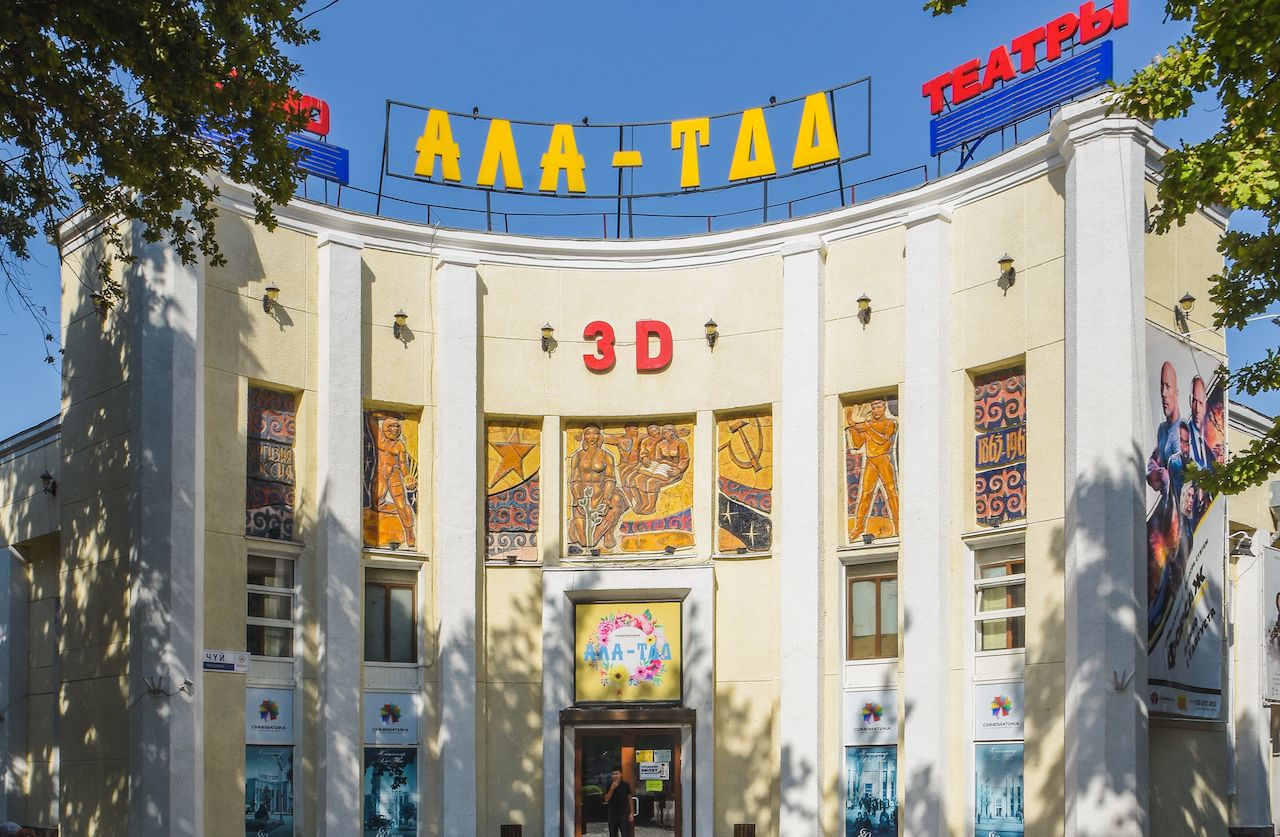 Another cultural landmark in the Kyrgyz capital is the Ala-Too Cinema, the oldest movie theater in Kyrgyzstan built in the early 1960s. While the concave facade still presents bas-relief Soviet sculptures, the cinema has recently been updated with recent technologies such as digital 3D projections. 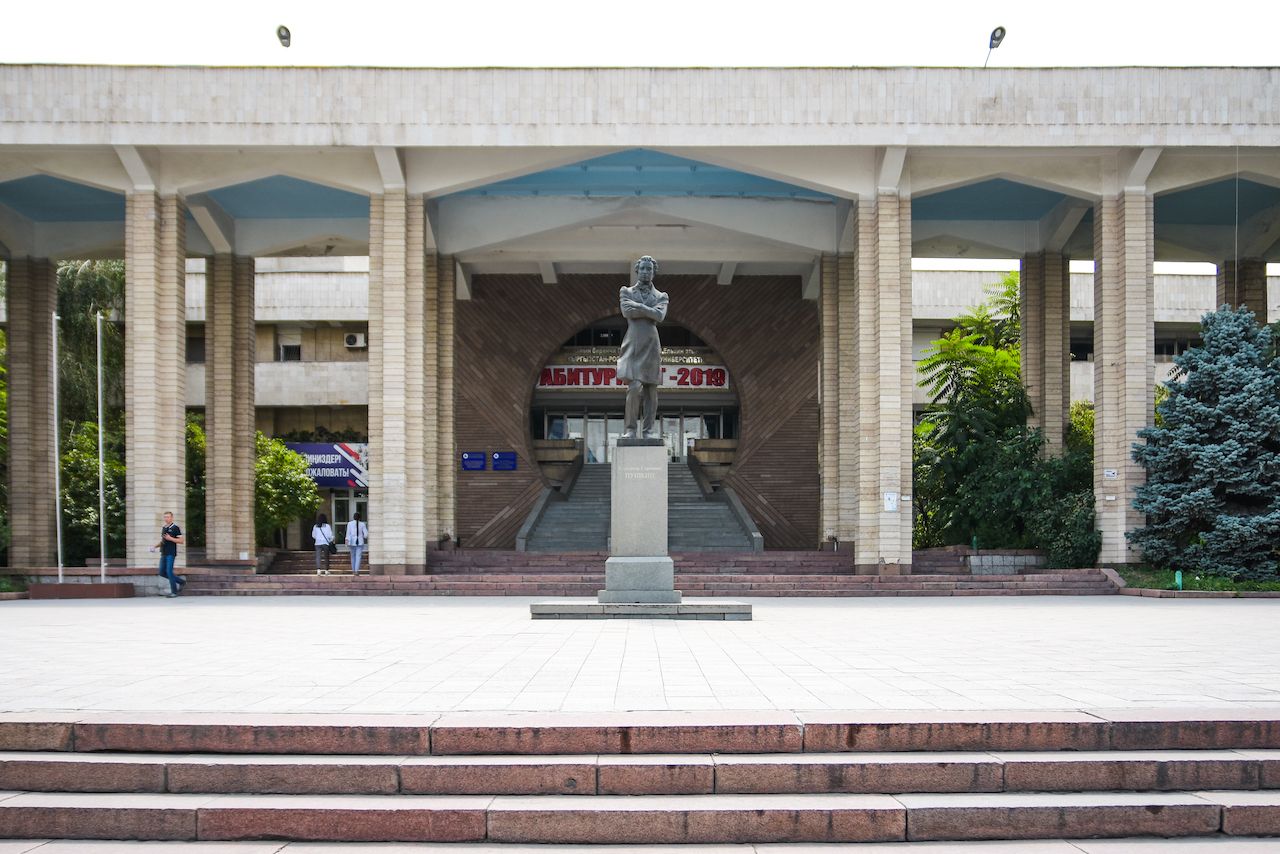 Founded in 1993 and named after Boris Yeltsin, the first President of the Russian Federation, the Slavic University of Bishkek is the result of the continued cooperation between Russia and the Kyrgyz Republic after the fall of the USSR. The University opened after the Warsaw Treaty of Friendship, Cooperation, and Mutual Assistance between the Kyrgyz Republic and the Russian Federation was signed in 1992 and established itself in the 1986 building.

14. “Fathers of the Nation” Monument 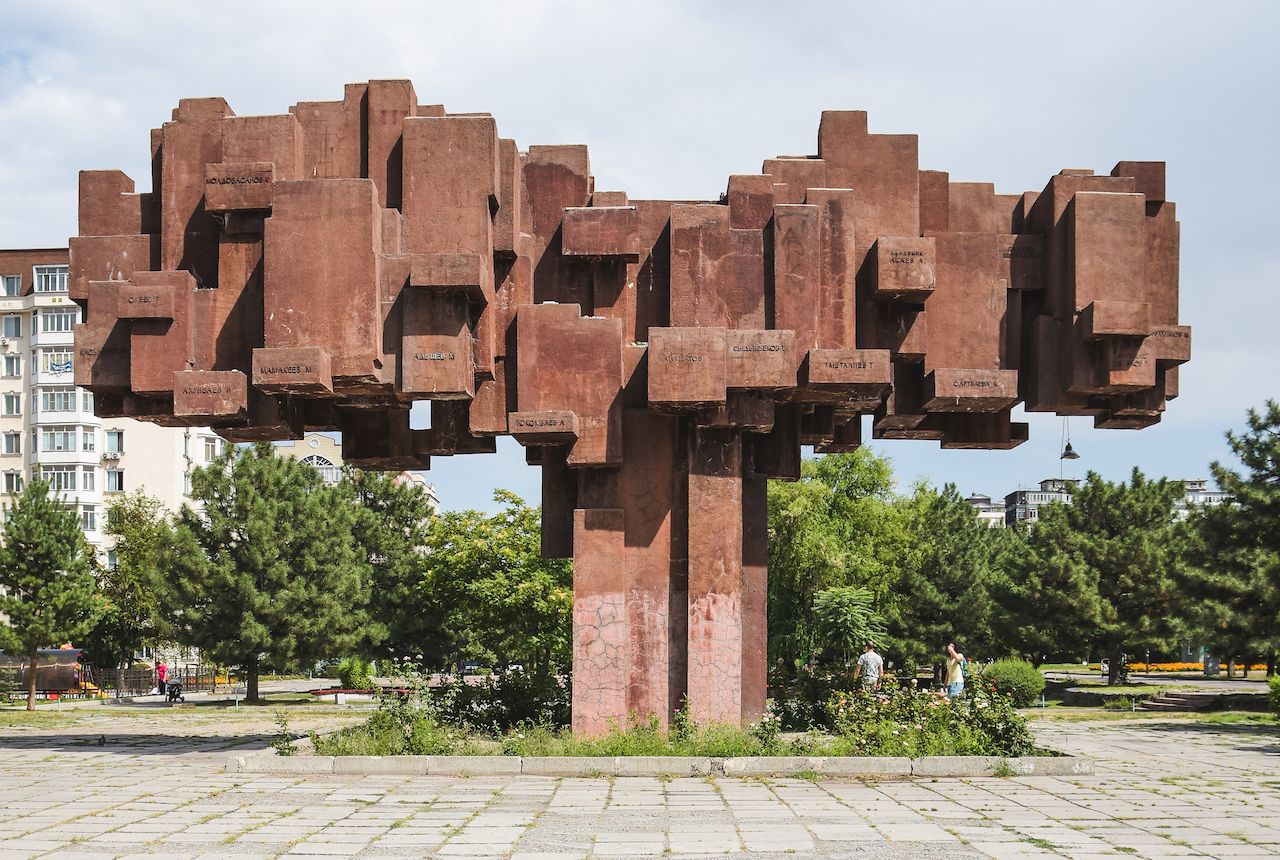 Built in 1995 by Turgunbay Sadykov as a tribute to some of the most prominent figures of Bishkek’s intelligentsia, the “Fathers of the Nation” monument originally included a series of life-size sculptures of artists, scientists, and politicians that have left a mark in the country’s history. The sculptures, however, started to mysteriously disappear shortly after the monument was uncovered — allegedly to be sold as scrap metal — so the artist decided to remove all the statues permanently and leave the metal, hammer-shaped structure as is.

Where: Turusbekova Street (behind the Philharmonic)