Known as yurts in the Stans and gers in Mongolia, the movable homes of Central Asian nomads are becoming a more and more popular form of accommodation for both backpackers traveling along the ancient Silk Road routes and tourists looking for alternative forms of accommodation in Western countries. Thanks to the success of community-based tourism programs in Kyrgyzstan and the loosening of visa regulations in once hard-to-access countries like Uzbekistan or Tajikistan, reaching remote camps to experience a lifestyle that has characterized this corner of the world for millennia is now easier than ever.

Portable and easy to assemble, traditional yurts are built of felt and waterproof skins covering a structure made of bent wooden poles. While simple in appearance, these circular tents offer great protection from the fierce climate of the steppe, shielding against the heavy winds that blow unhindered in the barren flats and offering enough insulation to resist extreme temperatures.

The roots of the yurt 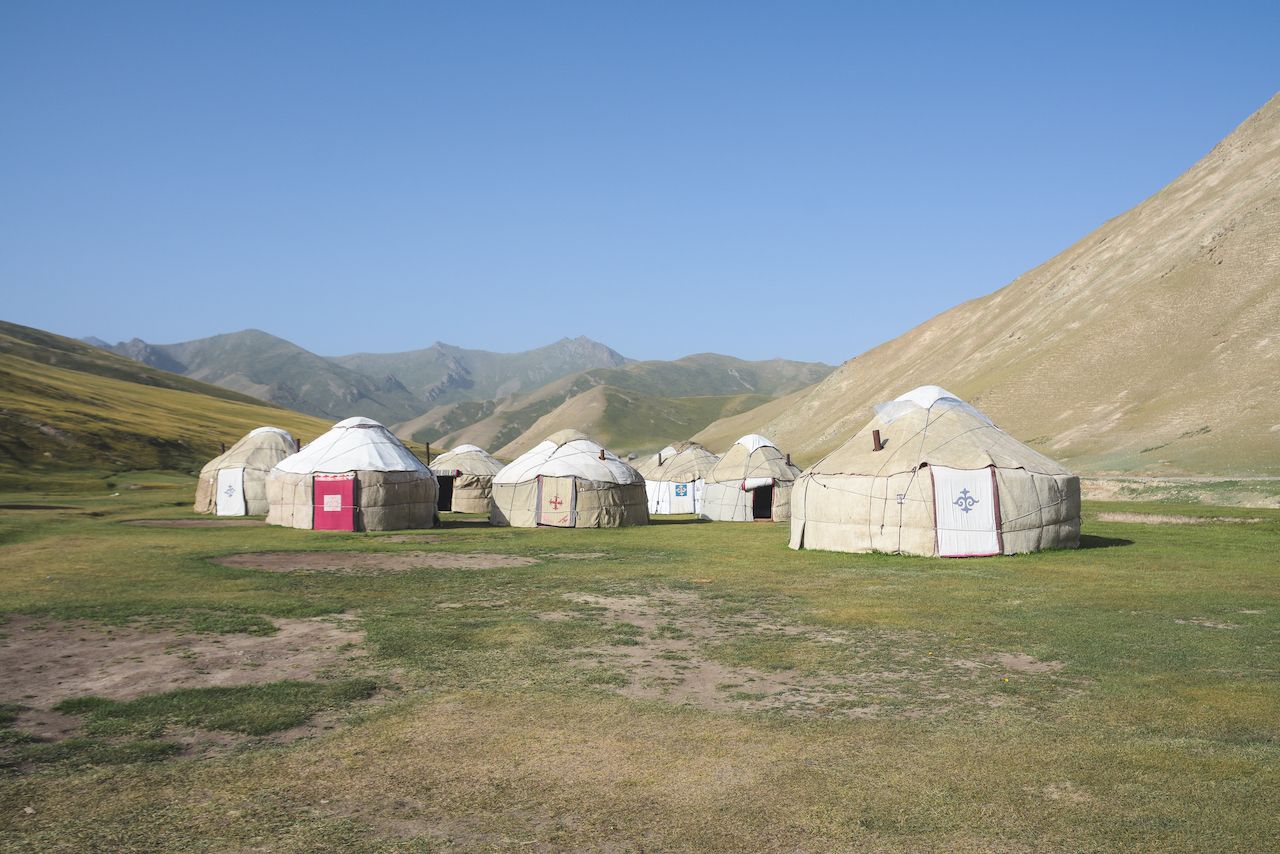 It’s not by chance that the nomad’s dwelling is most often associated with Mongolian culture. The word ger in Mongolian means “home,” and still today over 50 percent of the population of Mongolia lives in the tent that has become a national symbol, carrying forward a tradition that is thought to have existed since at least 600 BC. This said, borders and nomadism don’t go well together, and it would be reductive to refer to the iconic structure as a strictly Mongolian phenomenon.

Long before Marco Polo would describe the gers he shared with Mongols during his travels between 1274 and 1291, Herodotus had already written about the yurts used by Scythians living in the regions surrounding the Caspian and Black seas in 440 BC. While nomadic groups in Europe and Asia had adopted yurt-like structures that could be easily transferred from one place to the next one, their propagation is primarily linked to the conquests of Gengis Khan and his successors. By reaching Turkey and Europe in the 13th century, the Mongols exported a lifestyle that became popular among nomadic tribes of Central Asia, the Middle East, and Eastern Europe. 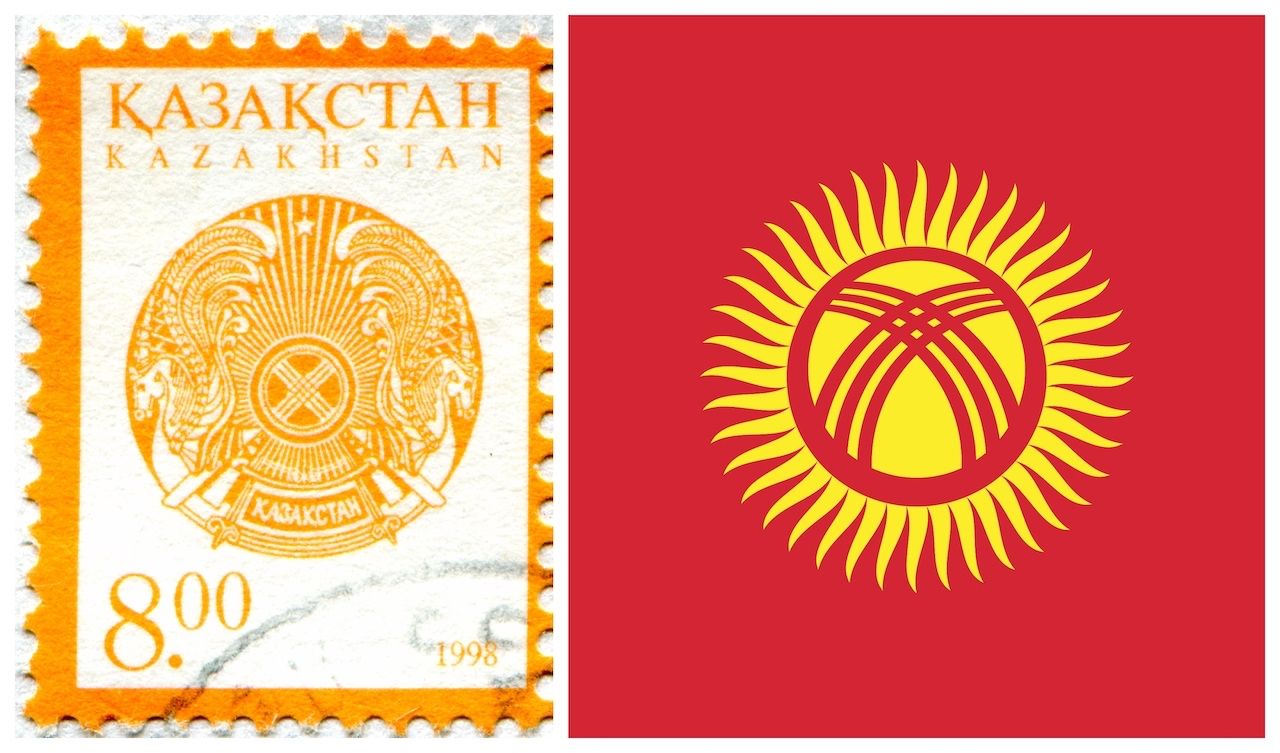 Until not too long ago, yurts could be found in Iran, Turkey, and rural parts of Hungary. It is in the Stans of Central Asia, however, that these movable homes have rooted themselves and acquired iconic status. Today they can be found in remote jailoos, the summer highland pastures where herders take their animals during the warm summer months. The yurt’s shanyrak — the wooden crown that holds the poles together from the top of the roof — appears on both Kyrgyzstan’s flag and Kazakhstan’s national emblem.

A simple and efficient build 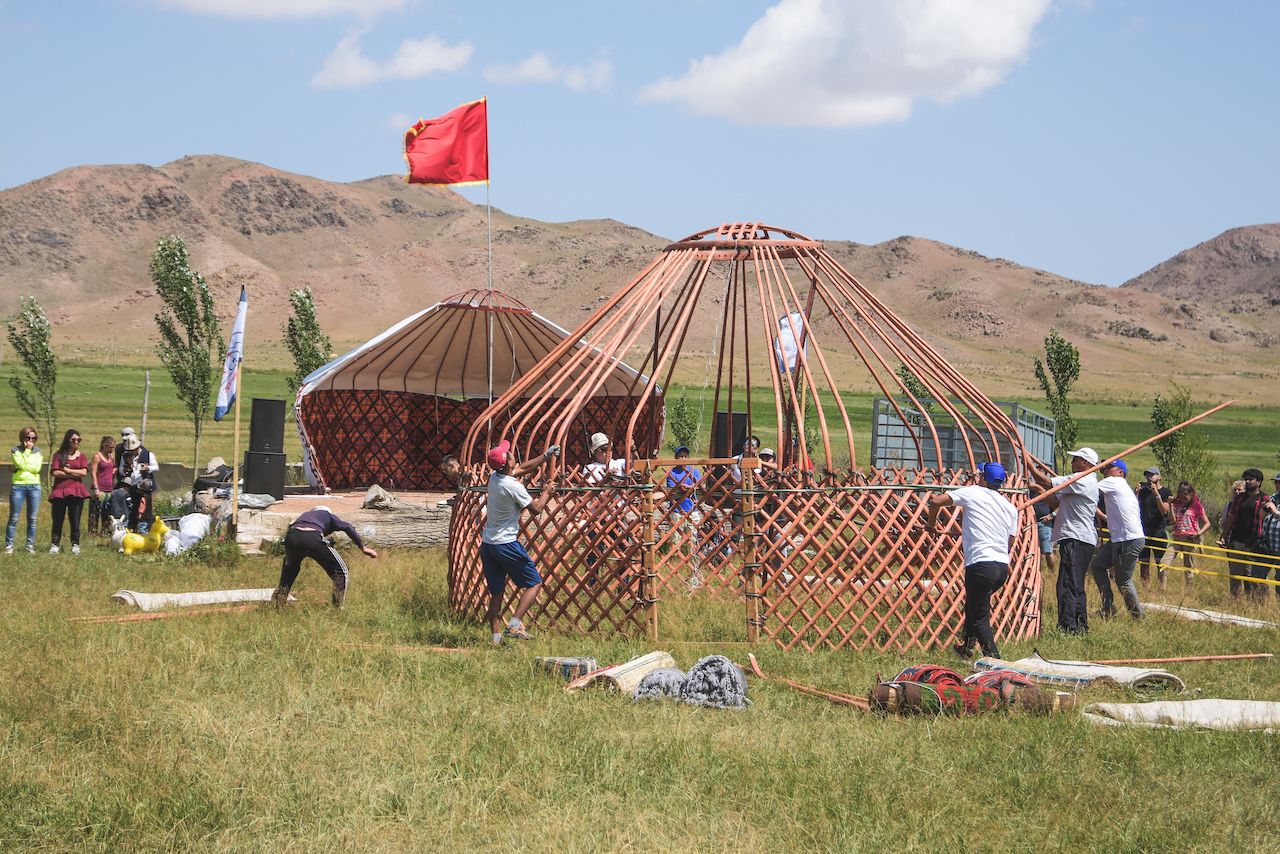 Setting up a yurt can take up to eight hours depending on its size. However, the speed record for yurt building belongs to the Kyrgyz team that participated at the 2018 World Nomad Games — they took only seven minutes and 46 seconds to build their tent.

The first step in building a yurt is setting up the circular structure on which the roof will be mounted. Although metal yurts exist today, in most cases the lattice is still made with a series of criss-crossed, light wooden poles that collapse into each other and can be transported in a cinch. 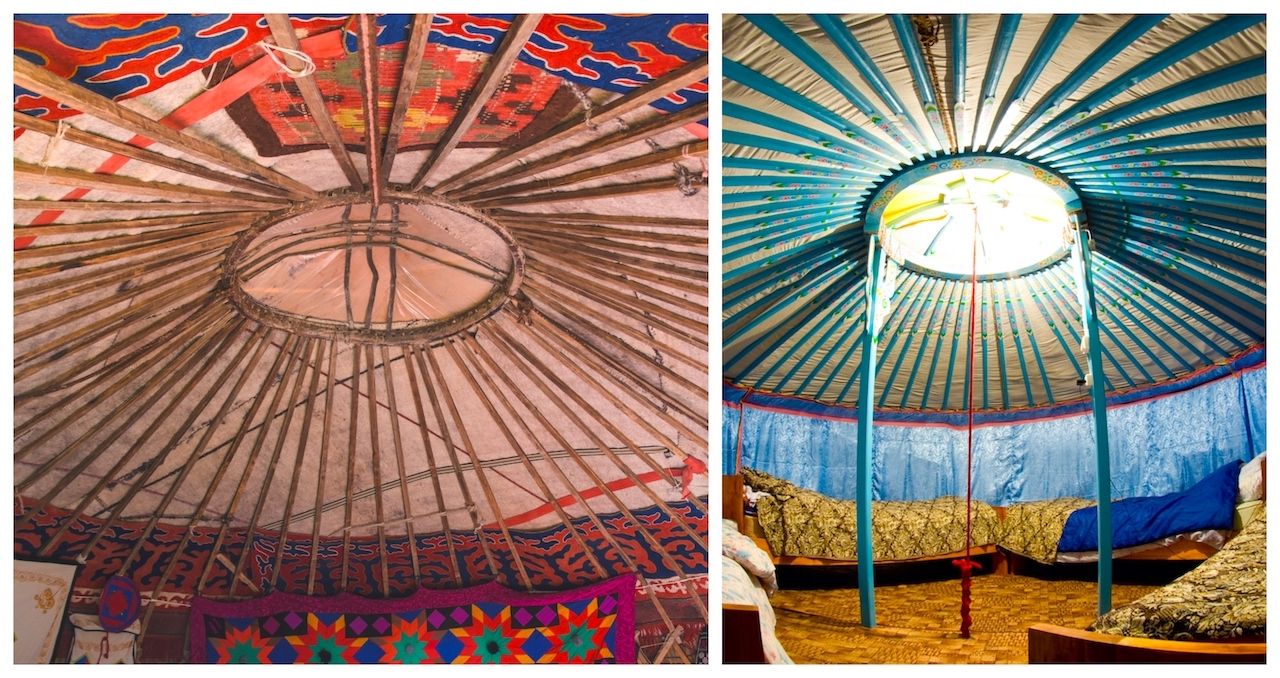 Left to right: Interior ceiling structure of a yurt versus that of a ger (Photo: Angelo Zinna + withGod/Shutterstock)

Once the lattice is set up and secured with the help of leather ropes, the roof is placed on top. There is a slight difference between the roofs of Mongolian gers and Central Asian yurts. In the first, the roof is made of perfectly straight poles, known as uni, while in the second they are bent to form part of the walls. Because of this, Mongolian gers tend to be lower in height than their Central Asian counterparts.

The crown is attached to three poles then balanced on the lattice and fastened with ropes. Once the crown is stable, up to 100 additional poles are added to complete the skeleton of the yurt. Finally, layers of fabric are placed on the outside to provide insulation and protection against the elements.

When complete, the interior of the yurt can be decorated with carpets and minimal furniture. A stove usually keeps the room warm, and the crown can be left open for ventilation. Most yurts are designed to sleep a family of four to five people, but larger structures capable of hosting up to eight people exist as well.

Where to find yurt camps 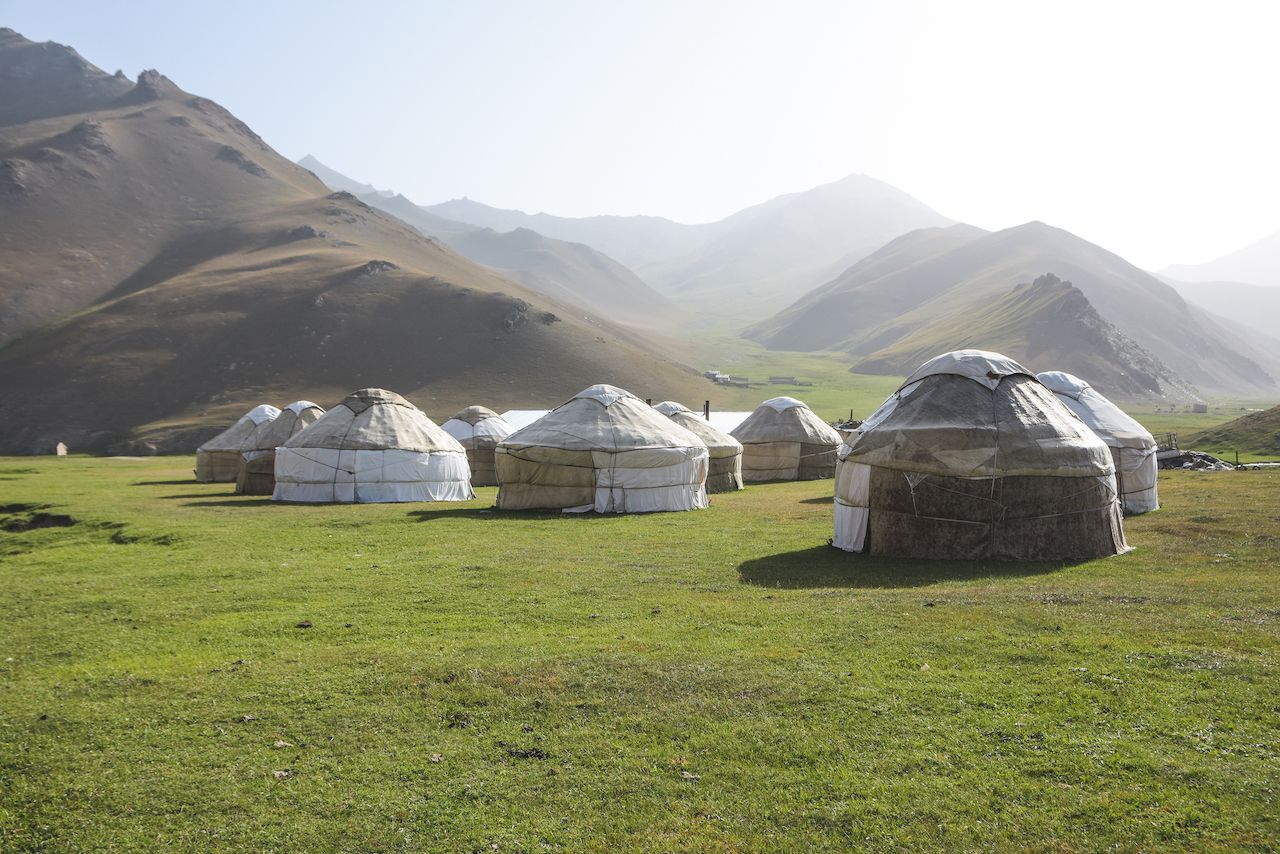 Yurt camps can be found all over Central Asia, with the biggest concentration being in Mongolia and Kyrgyzstan. They vary in size, but most often camps that host tourists are family-managed businesses where up to 10 tents are reserved for visitors while the rest are used by the locals. Most are only open in the summer months, with some exceptions for low-altitude camps near bigger cities.

Although yurt camps are normally found in some of the most remote corners of the world, getting there is fairly simple if you plan ahead. In Kyrgyzstan, the Community Based Tourism Association can help you find camps to break up multi-day hiking adventures, while in Mongolia ger stays are an essential part of any Gobi Desert tour. Some rental gers are even available on Airbnb.

Among the most incredible destinations for yurt camping in Kyrgyzstan are Song Kul lake, a jailoo positioned on the shores of an alpine lake at an altitude of 10,000 feet; Tash Rabat, where camps surround a 15th-century caravanserai; and the Valley of Flowers, near Jeti Oguz. Sleeping in a yurt is also possible in Kazakhstan, Tajikistan, and Uzbekistan.

The Kyrgyz village of Kyzyl-Too is a great place to go if you want to learn more about the craft of yurt building. This sleepy town on the southern shore of Issyk-Kul lake is known as the Kyrgyz capital of yurt-making, and it is possible to participate in workshops and learn all the tricks of the trade.