Even though gaming has become a $300 billion industry, it still feels most at home in a basement.

Not to confuse the Space gaming center with the concrete walls under your parents’ living room. But the world’s largest gaming center — an 80,000 square foot facility with a bar, cafe, and full-scale performance venue that opened in late 2021 — still sits underground. Its subterranean locale, a floor below street level on Stockholm’s Sergel’s Square, is more cool than counterculture, though. Because this state-of-the art facility is bringing gaming into the family-friendly mainstream. 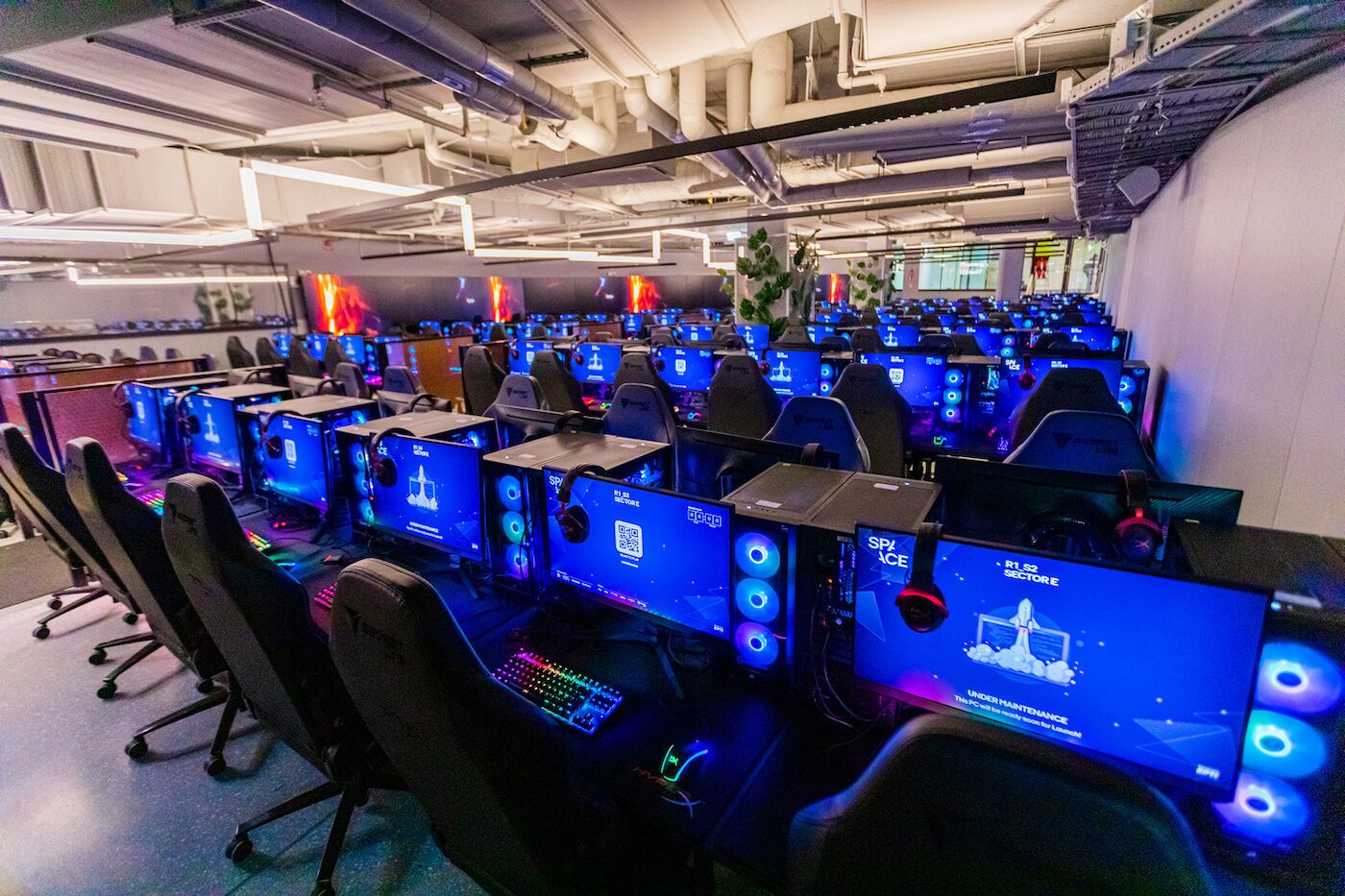 Fat Cat’s Asian Brasserie isn’t exactly the signage one would expect to announce the world’s largest gaming center. But step under the sign of Space’s attached restaurant, and through its ornate decor, and you’ll find yourself at the Space gaming center’s front desk.

Meander down a staircase beyond the reception area, and you’re dropped in a space-age setting that feels more like a futuristic version of NASA’s Mission Control Center than anything involving video games.

This “basement” begins with a fern-filled cafe, which serves as a waiting area for the sliding glass cylindrical portal to 400 high-speed gaming consoles. How fancy are these things? The portal only allows one person at a time through its double-locking gateway, and is equipped with a scale under the floor that tracks a member’s weight as they enter and exit. Just in case someone tried to hide a graphics card under their shirt. 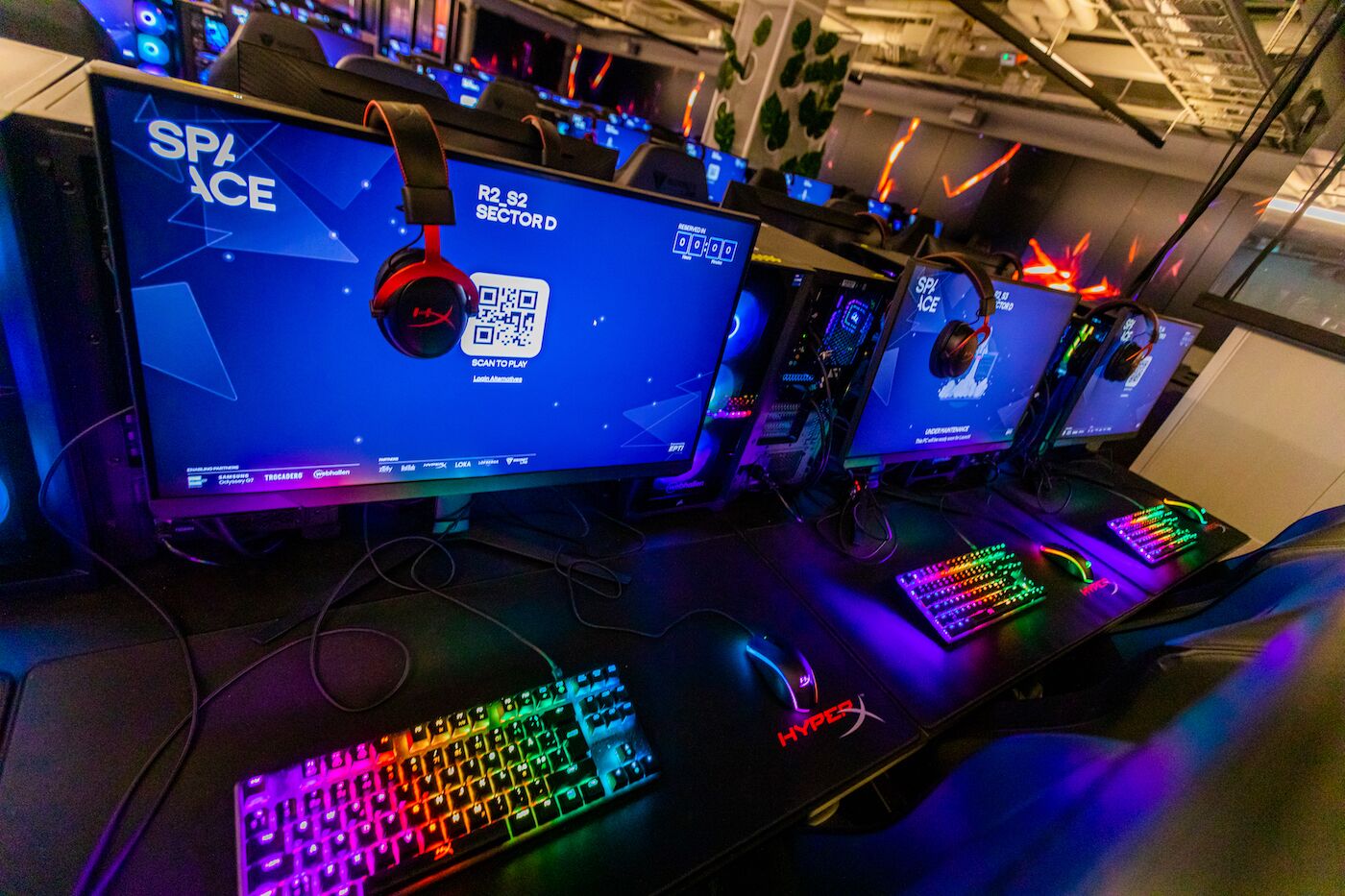 Once cleared, guests step into a sea of computer consoles, bathed in electric blue light and glittering with rainbow LED keyboards. And while the lighting is still dim, the ceilings are high and bright, showcasing exposed wiring that gives slight nods to the inside of a submarine.

Rows of gaming consoles line the sprawling main floor, equipped with a G force 380 Navidea Generation 11 i7 processor and what Space’s IT consultant Robert Rydberg calls “the holy grail of graphics cards.”

“Put it this way,” he laughs as he tries to put the specs in layman’s terms. “There’s no way I could ever have this kind of setup at home.”

Rydberg is a lifelong gamer, who along with other members has found a home at Space. Between the members and game-savvy staff, it has quickly become a gathering place — like the Internet Cafes of the pre-smart phone era — boasting about 85 percent occupancy since it opened.

“I have sat at home for 10 years and I have never met any other gamers until now,” says Rydberg, “The gamer community is very accepting of anyone, which is counterintuitive to what you hear about trolls and toxic people.”

That toxicity may well be a result of the anonymity playing at home affords. Because in person, Space is quiet and Scandinavian polite, with little but the soft clicking of keys and mouses heard above the whirring fans of the gaming consoles.

“Space is a social hub,” says Space CEO Asa Caap, “It’s not just for gamers, but for parents with their kids, they’ve been our most frequent visitors. And it’s the only sport where men and women can really compete equally.”

Caap, who is female, says one of Space’s aims is to make gaming more accessible and open to women, eliminating the toxic language and sexist environment some associate with the digital world. The center has strict house rules, prohibiting disrespectful language, bullying, and any pornographic material. Members — who shell out about $5 an hour for the right to play at the world’s biggest gaming center — are banned for life if they stray from the guidelines. Space also employs several women Game Masters — a combination tech support/rules police — giving the place an aura of female authority.

Space even tries to keep the overall noise down, so players don’t start yelling profanities at each other like they might over a headset.

“The only screaming here is happy screaming,” Rydberg says.

The biggest challenge, he says, hasn’t been getting people through the doors or to behave, but rather getting enough games set up on the consoles. Because each console requires a separate license for every game, scoring hundreds of them at once is a logistical headache. Though he says Space has reached large-scale partnerships with both Microsoft and EA Sports to help get more content onto the consoles. 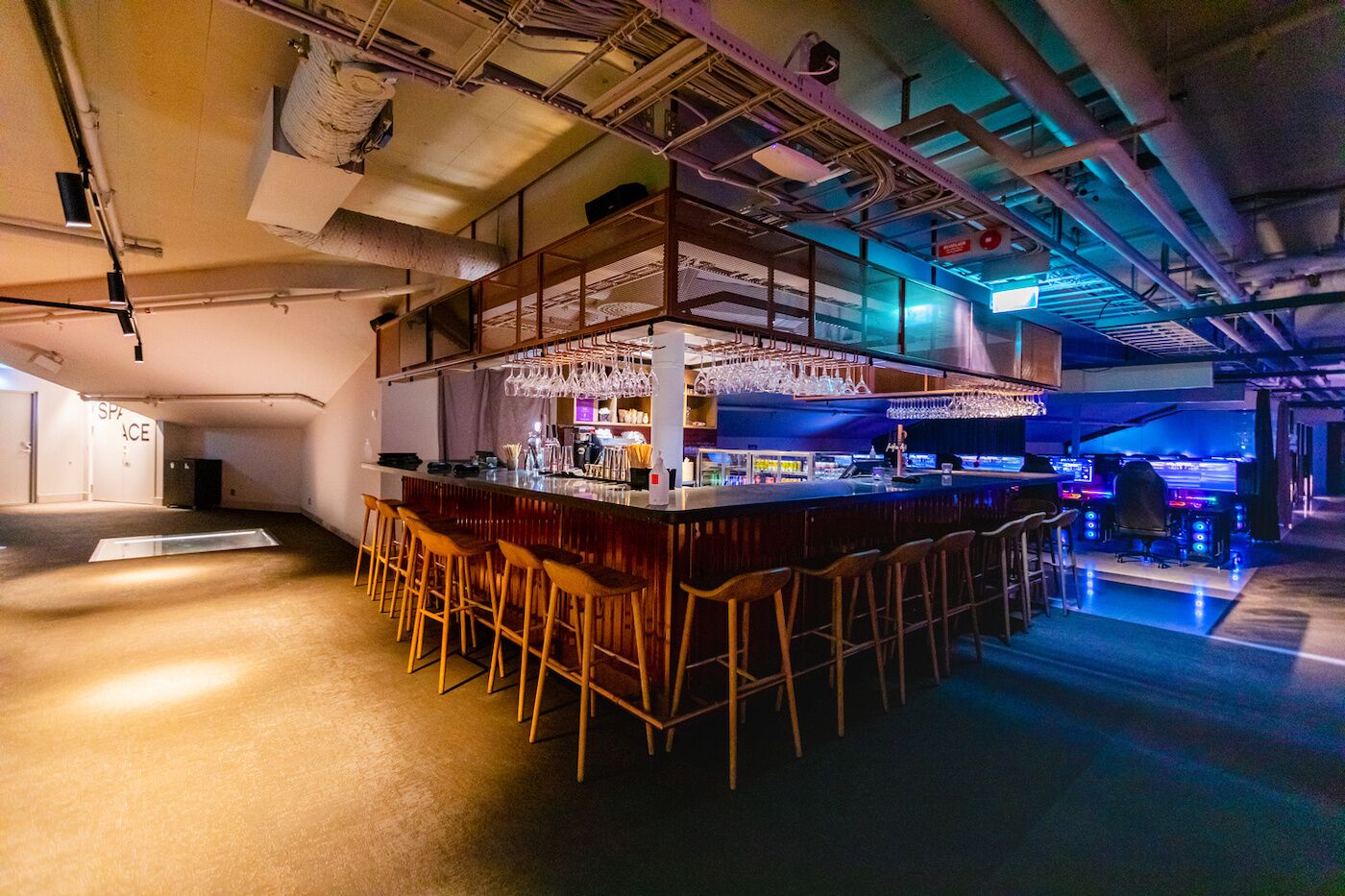 Space isn’t just a high-tech rec room to hang out and play video games, though. A level down from the main gaming center sits Space’s bar, a 20-and-over area set in an old underground rock club where the likes of U2 once performed. Part of the dance floor still remains preserved under glass.

“This is popular on the weekends,” Caap says. “You could even come here for dates.”

The bar is the only place where booze is allowed at the computers, though Caap says spilling hasn’t been an issue as of yet.

Downstairs, on the same level as the bar, is also Space’s “Boot Camp” rooms — essentially practice facilities for Esports teams so they can play in close proximity. Anyone can rent them, though, so if you prefer playing with your buddies in a small office, the option is there. 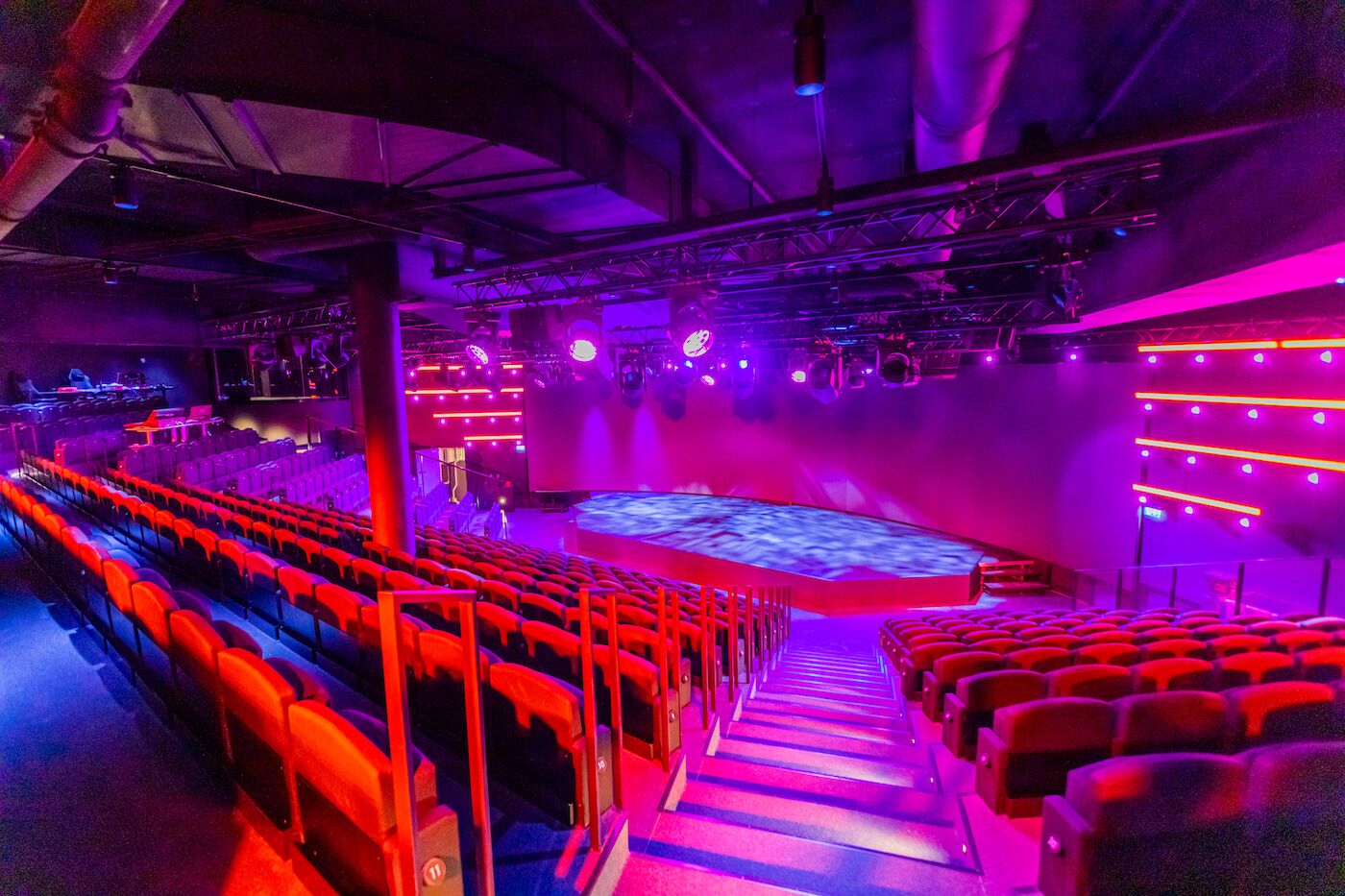 The downstairs bar serves double duty as the concession stand for Space’s Esports arena, a 450-seat theater with standing room for 200, a 1,000-square-foot screen, and a press box. It’s the largest dedicated standing Esports arena in the world, and while it can also host concerts, Caap says thus far it’s been most popular for corporate events.

Above the gaming center, Space is also home to the brand-new Avicii museum, a long-term exhibit about the late EDM star fully endorsed by his family. 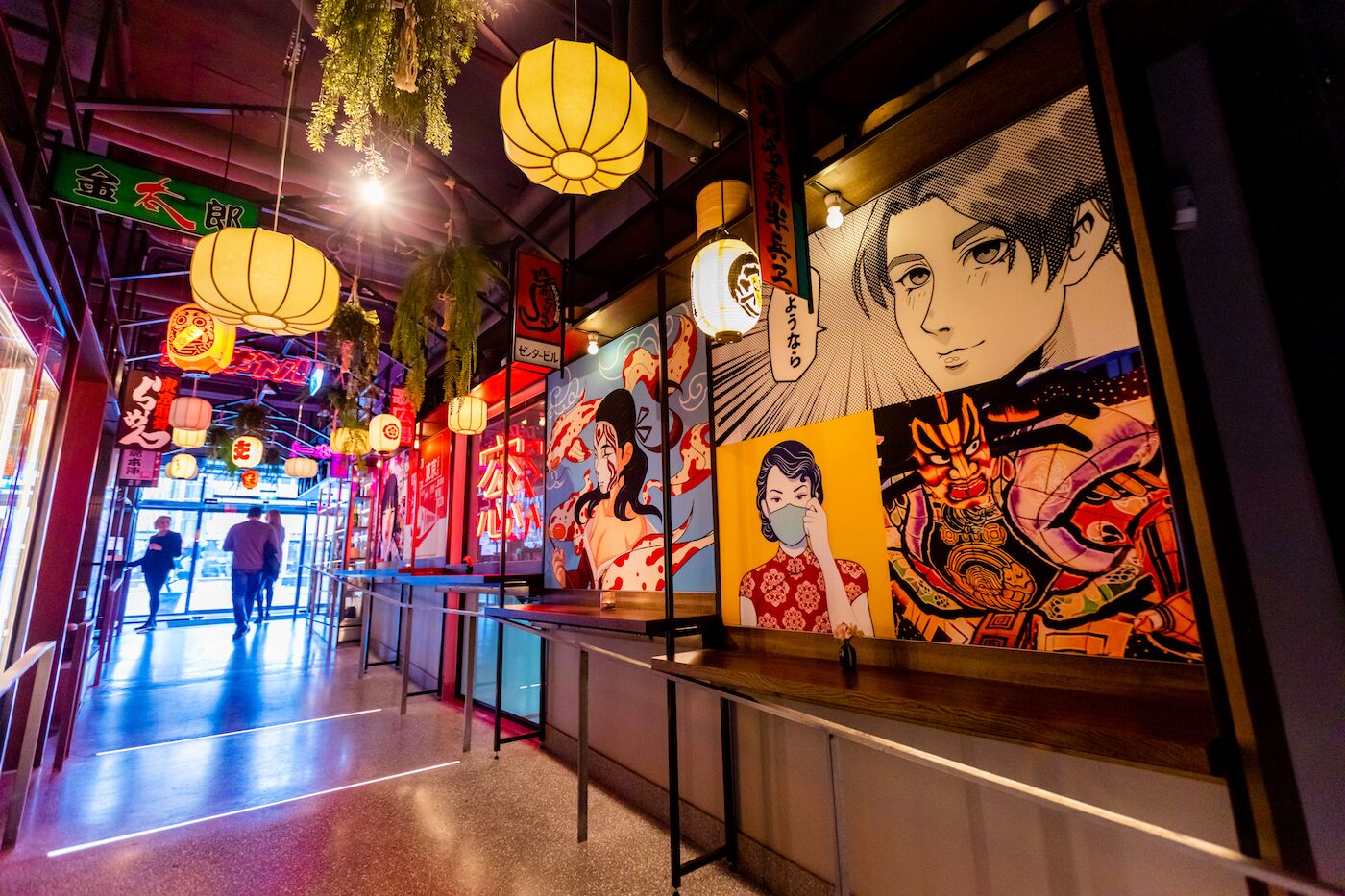 Space’s top floors are devoted to a co-working space and art installation area, which on the day we visited was occupied by Milakji, a pastel wonderland billed as Stockholm’s first Selfie Museum.

All of it – from the art to the sushi to the common-area conference rooms — feels incredibly mainstream, and announces that while gaming may still be in the basement, it’s far from underground.

“We’re trying to bring gaming out of the subculture and into the main culture, and not have to be hidden,” says Caas, who worked in liquor before coming to gaming. “It’s letting parents play with their gamer kids and get to understand them better, and, really, blending the two worlds.”

Art + ArchitectureThis 20-Story Hotel in Swedish Lapland Is the World’s Tallest Wooden Building
Tagged
Culture Entertainment
What did you think of this story?
Meh
Good
Awesome

8 Things You Need To Know Before Visiting Stockholm

A Budget Guide To Stockholm