The spices used in a dish can say a lot about a meal. They can give a clue to the cook’s background or the part of the world that the recipe comes from. A good spice mix can also, obviously, pump up the flavors. The best spice mixes tell a story — regardless of whether you know exactly what’s inside or not.

These 13 popular spice mixes from around the world do just that. Many of the blends below will vary in proportions and ingredients depending on the brand or cook, but listed are the most common.

Berbere is word derived from the Semetic Amharic language of Eastern Africa that means pepper or hot. Whether or not the spice blend, which is common in Ethiopia and Eritrea, is actually spicy depends on who’s blend you’re using, however. Regardless of if the berbere mix brings the heat, one thing is universal: berbere spice goes well with just about everything. The complex mix adds a flavor boost to stews and dishes like dor wot. It’s used for both meat and vegetables, both as a marinade and a spice for after the food is prepared. When mixed with oil and alcohol, it results in a condiment paste called awaze. 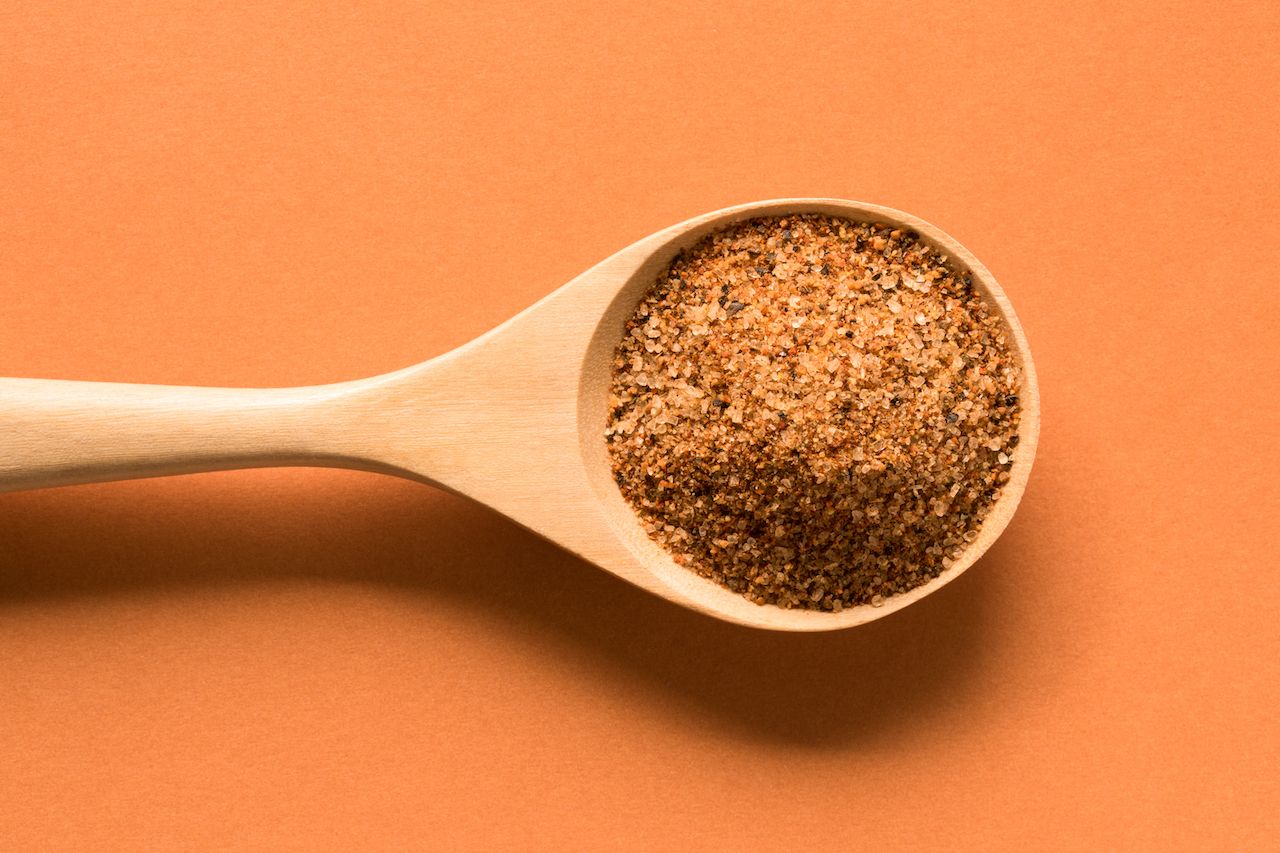 New Orleans, and Louisiana as a whole, has a well-earned reputation for being the home of some of the best food in the country. And while you can find a diversity of dishes and cooking styles with a Louisiana spin, it doesn’t get more regional than Cajun.

The word Cajun comes from les Acadiens, who were the French colonists in the northeastern part of Canada then known as Acadia. They were forced out by the British in the mid 1700s, and many went to Louisiana, which was a French territory at the time. The cooking traditions of these displaced Acadiens were adapted to the ingredients that were available in the region, along with the cooking traditions, recipes, and ingredients used by Indigenous peoples, African-Americans, Germans, and Italians.

Cajun spices can be used on just about everything, from slow-cooked barbecue to fish to vegetables. Cajun cooking isn’t to be confused with Creole — when it comes to food, the most obvious difference between the two is that Creole recipes typically have tomatoes while Cajun recipes do not.

First things first: chili powder and chile powder are not the same. The latter is dried chiles that are crushed into a powder, while the former is a mix of powdered chiles and other spices that is named after chili con carne. Popular in Mexico and Texas, chili con carne is a meat stew, and chili powder imitates the flavors. Recipes for the spice mixture, just like for the dish it’s named after, vary — including when it comes to the types of chiles used, which is the key component for how spicy the mix itself is.

Chinese five spice is an easy spice blend to remember. The five refers to what’s in the mix: Sichuan peppercorns, cinnamon, fennel, star anise, and cloves. That said, like all spice mixes, there is variation depending on who makes it. Some Chinese five spice blends might even have more than five spices. Regardless, it’s a versatile mixture in Chinese and Taiwanese cooking that’s commonly used for meats, marinades, and stews, but tastes just as good mixed into cocktails. 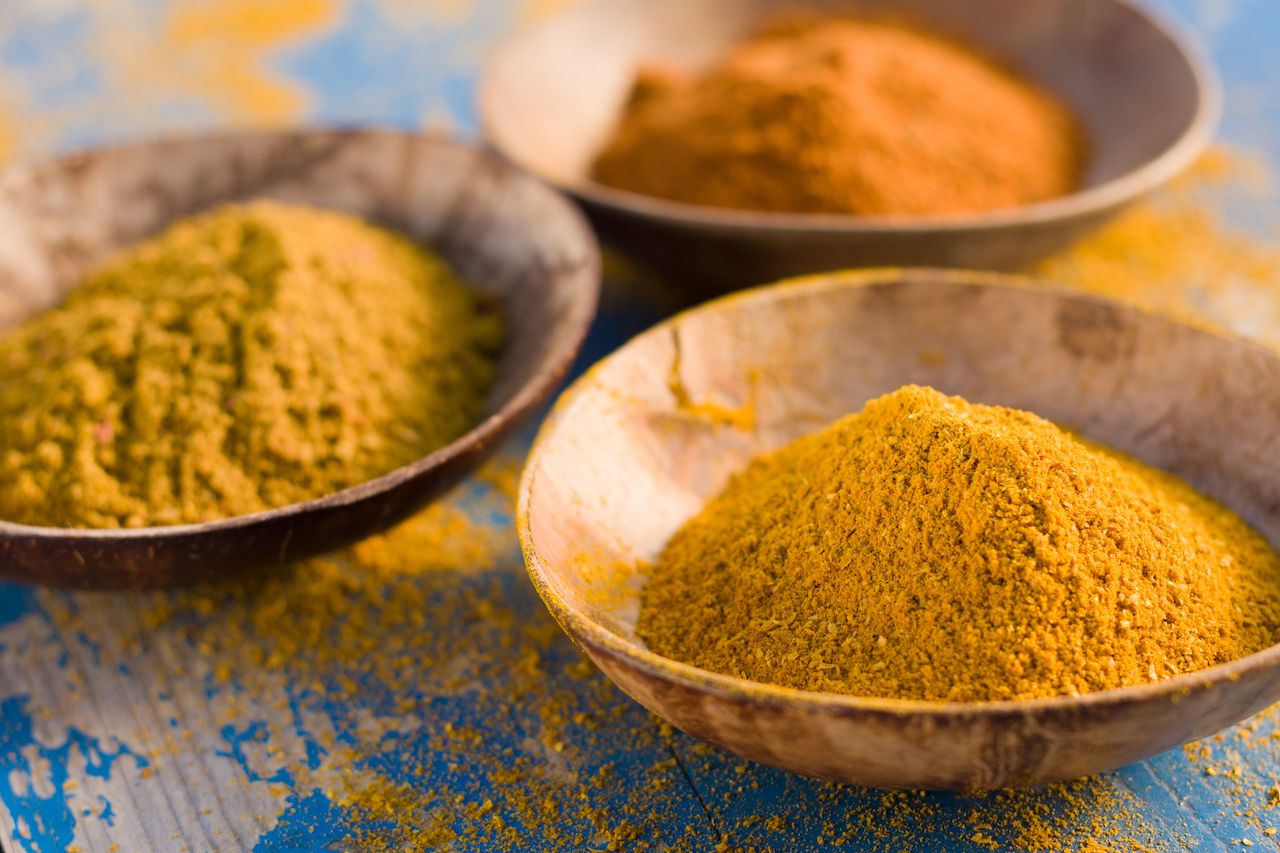 Curry can mean different things to different people. The word goes back to British colonists in India, who used it to describe a variety of different dishes. In the Western world, mixes of the spices commonly used in Indian cooking took the name of the dishes that the British put under the blanket “curry” category (in India, there is no curry powder, but instead garam masala, which means warming spices in Hindi).

What’s included in the mix will change depending on which country’s curry the curry spice mix is based around. That could mean turmeric-heavy curry powders from Jamaica or a green curry from Thailand. There’s a wide world of curries to try, and exposing yourself to the flavors through curry powder is just the start.

According to one legend in the New Yorker, a Queens man named David Gussin invented the everything bagel in the 1980s after he dumped the spices at the bottom of the oven he was cleaning onto the next day’s bagel rather then throwing the spices out. However, a man named Seth Godin claims he was making everything bagels back in 1977. It doesn’t matter who decided to throw common bagel toppings all together, though. Today, everything bagel seasoning is for more than just bagels. It also goes well on eggs, when used as a dry rub for chicken, or mixed into fry batter.

There are two types hawaij (pronounced “huh-why-adge”): savory and sweet. The name for this Yemeni spice blend simply means “mixture” in Arabic. Meats, vegetable dishes, and stews get the savory blend, while baked desserts and drinks like coffee get the aromatic sweet blend. As with berbere and ras el hanout, the exact proportions and ingredients in hawaij — savory or sweet — comes down to who, or what brand, is doing the mixing. 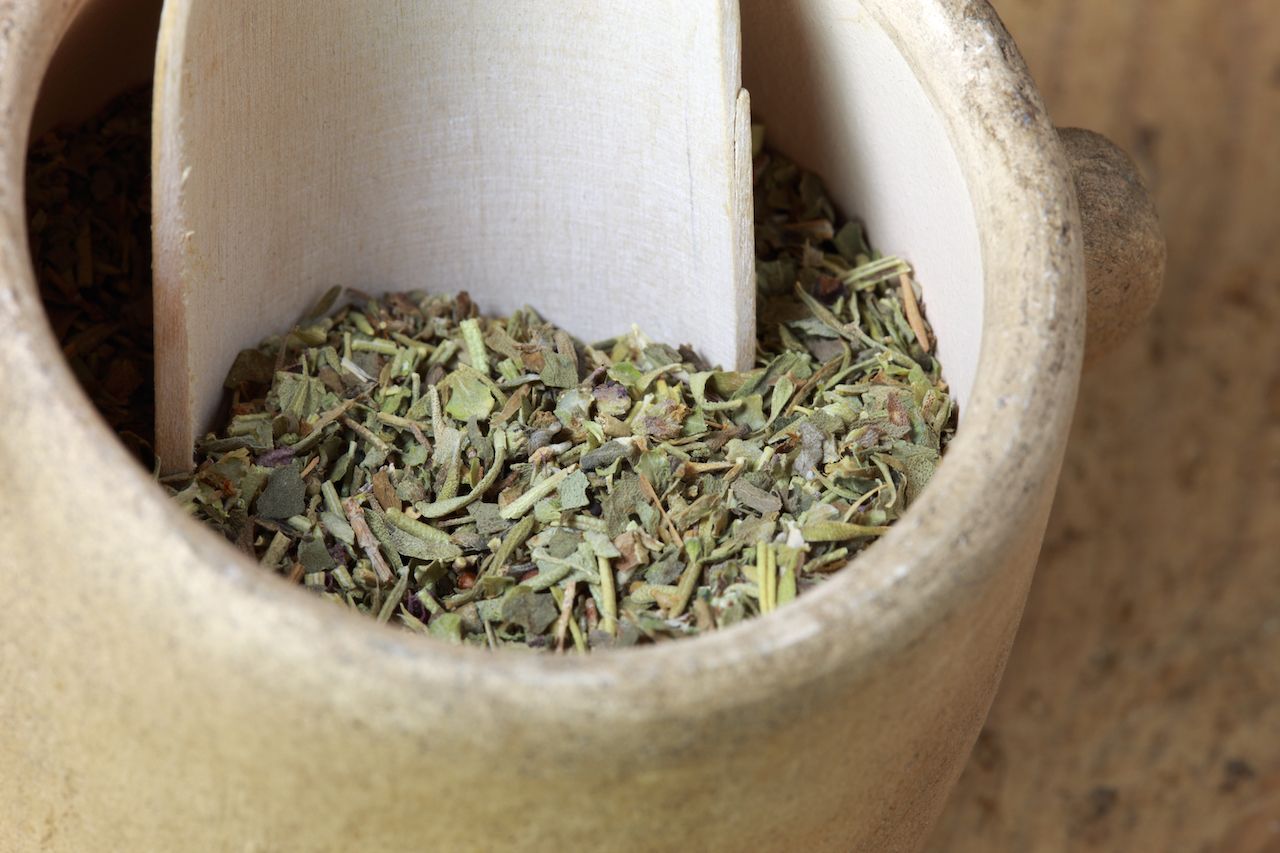 This spice mix comes from Provence, France, which borders the Mediterranean near Italy. Herbes de Provence simply means herbs from Provence, and the spice blend is used on a number of dishes made in the region. Julia Child was a fan and gets credit for helping to formalize and popularize the mix of spices and herbs. If you’re a fan of following a Mediterranean diet that’s big on fish, chicken, cheeses, olives, and vegetables, then this is one spice mix you’ll want to always have on hand.

Jamaican jerk is one of the oldest styles of barbecue. It borrows cooking techniques and styles from formerly enslaved people from Africa were taken to the island as well as traditions from the Taíno, who were part of the Indigenous Arawak Caribbean peoples. Formerly enslaved people who escaped to Jamaica’s mountains, the Maroons, heavily influenced what we now know as jerk, according to Smithsonian Magazine. Jerk is meat that’s seasoned, smoked, and grilled with a wide variety of spices, alliums, herbs, and peppers.

There are few spice mixes that are as indicative of a particular time of year than pumpkin spice. From the start, pumpkin spice was associated with pumpkin pie — the 1798 book American Cookery has two pumpkin pie recipes that use what are now lumped together as pumpkin spice. According to Food & Wine, Thompson & Taylor Spice Co. came out with the first commercial, ready-to-use pumpkin spice blend in 1933, followed by McCormick & Company in 1934. It has never had pumpkin in it, of course, but is traditionally used to flavor pumpkin pie (and, later, pumpkin-pie-flavored things like pumpkin beers and pumpkin spice lattes). 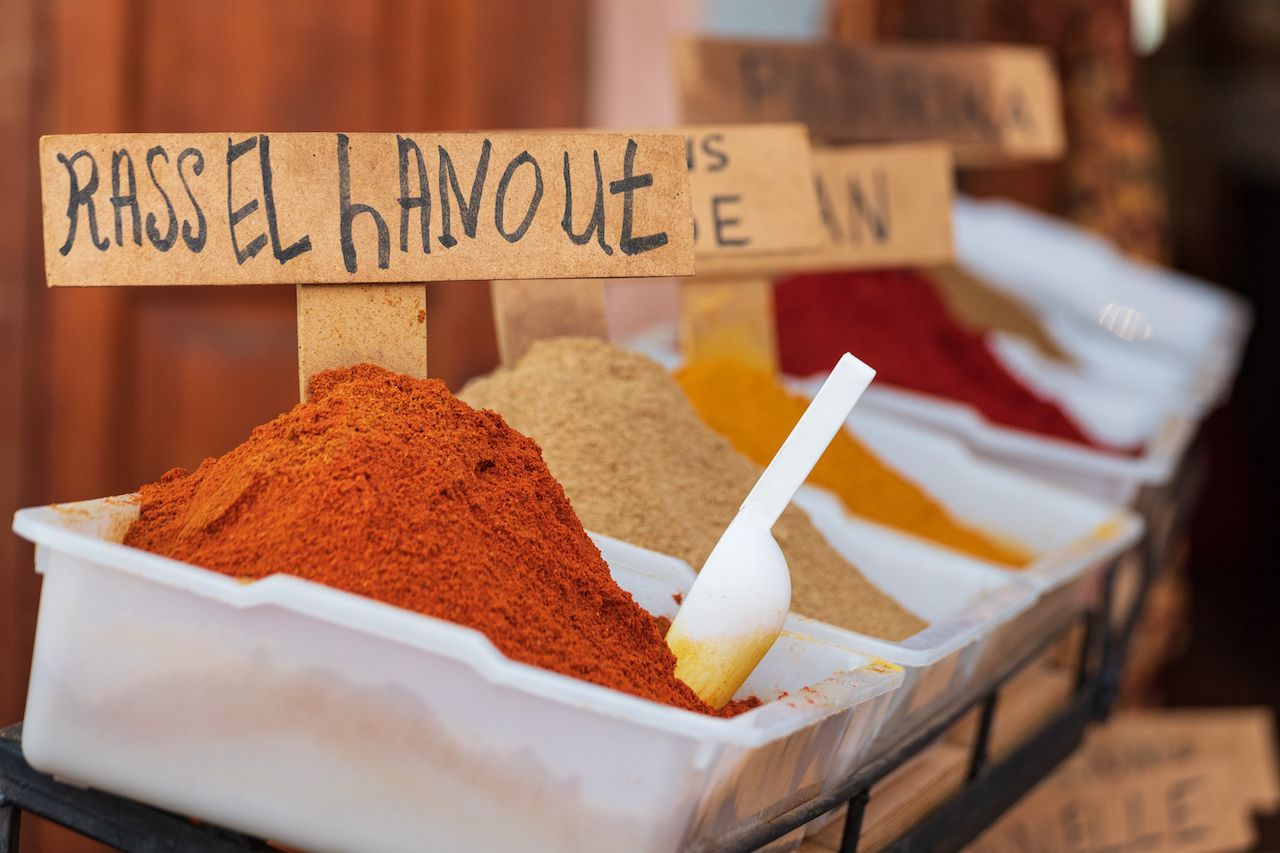 Like with berbere, ras el hanout can be a bit nebulous if you’re not familiar with the mix — primarily because there’s no one set ras el hanout. The mix comes from Morocco, Tunisia, and Algeria, and the Arabic name translates to “head of the shop” or “top shelf.” It’s blended by the store owner and can include dozens of different spices. Because of the variation, trying it out before committing is key. Still, you can count on ras el hanout for marinades and rubs.

Tajin isn’t some long held regional recipe. In fact, it has a pretty short history, according to the New York Times. The spice mix only dates back to 1985 when it was invented in Guadalajara, Mexico (and tajin wasn’t in the United States until 1993). It quickly took off and became a household name — or, as Mexican food historian Gustavo Arellano put it to the Times, “Tajín is a lifestyle.” The salty chile and citrus mixture brightens up fruits and vegetables like mango, corn, cucumber, and pineapple. Don’t feel limited to fresh fruits and veggies, though. Tajín is also good on popcorn and on the rim of a michelada.

There’s a wild herb related to mint called za’atar that grows in the Levant, but when you hear people talking about using za’atar in their cooking, they’re usually referring to the spice mixture of the same name. The combination of spices is tangy, nutty, and earthy. Specific recipes for the mix vary to match taste preferences, and za’atar is typically put on top of hummus or labneh. Pita breads are often toasted with oil and za’atar as well. In short, za’atar is one of those spices mixes that’s best to just put on anything and everything you feel like putting it on at that moment.

Food + DrinkFrom India To Thailand, a Guide To the World’s Curries
Tagged
Food + Drink
What did you think of this story?
Meh
Good
Awesome