Under normal circumstances, spring conjures images of melting snow, flower fields, and music festivals. In the bizarre and uncertain roller coaster of 2020, spring has mostly brought Zoom conferences, way too much Netflix, and staring longingly out your window. Our outdoor activity might be limited to our respective neighborhoods or, if we’re lucky, a nearby park, but that doesn’t mean nature is canceled. No, you can’t visit the tulip gardens in the Netherlands or the cherry blossoms in Japan this year, but remember — the coronavirus can’t make flowers wither or stop the rain from enriching the soil. Although humans are certainly getting less sunlight these days, perennial spring blooms are right on schedule. From the US to Indonesia, spring is still popping in these places around the world. And if there’s a silver lining to any of this, they’re more untouched by humans than ever. 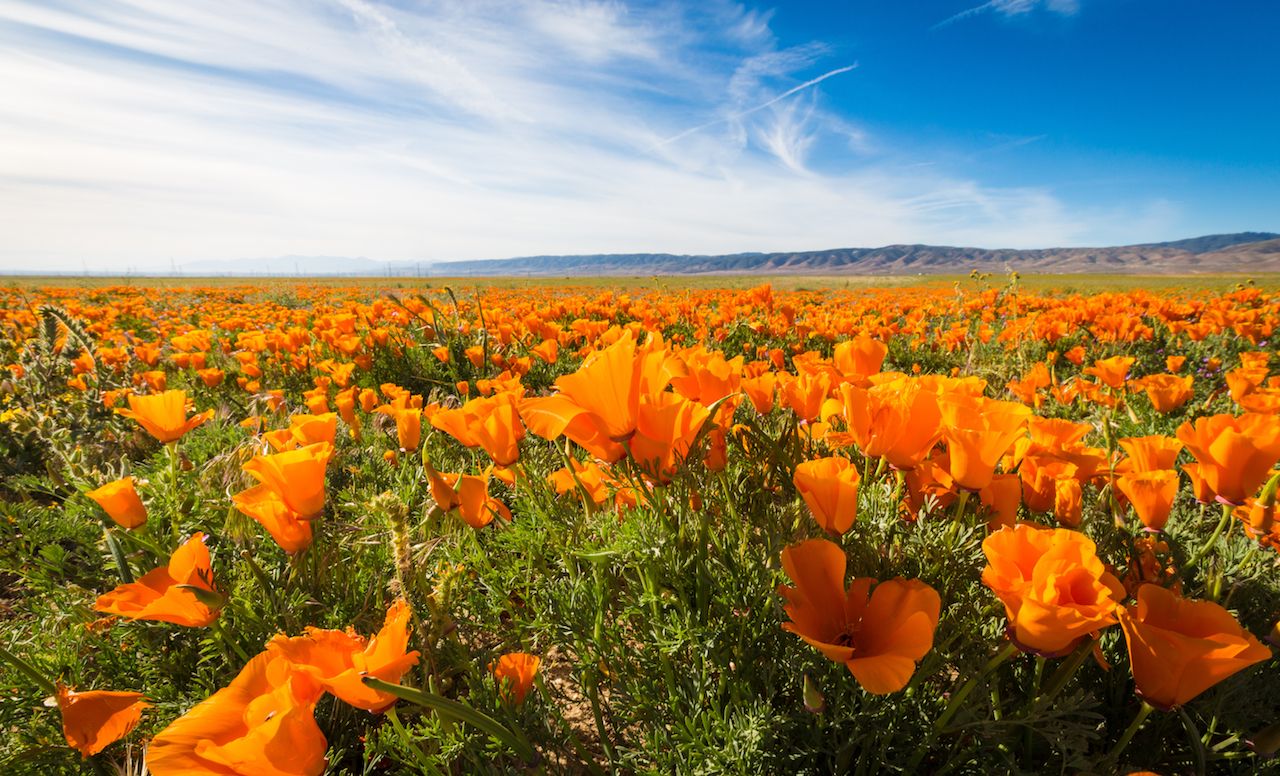 These days, we don’t need a massive super bloom to appreciate the color in our lives. California’s wildflowers might not be quite as sensational this year, but in this dreary era of lockdowns and social distancing, we’ll take what we can get. About 75 miles north of Los Angeles, you’ll find rolling hills covered in some of the country’s most beautiful poppies. The poppies typically open up around mid-morning and remain open until late afternoon, depending on the weather. The best way to see them is by walking the 0.7-mile trail winding around part of the Poppy Loop. The poppies are clearly the headliner here, but if you’re lucky, you might also spot some California aster, blue lupine, and desert pincushion.

The park remains open even amid the coronavirus crisis, so if you do choose to visit, make sure you distance yourself from other visitors. To enjoy the poppies more remotely, you can always check out the live poppy webcam. 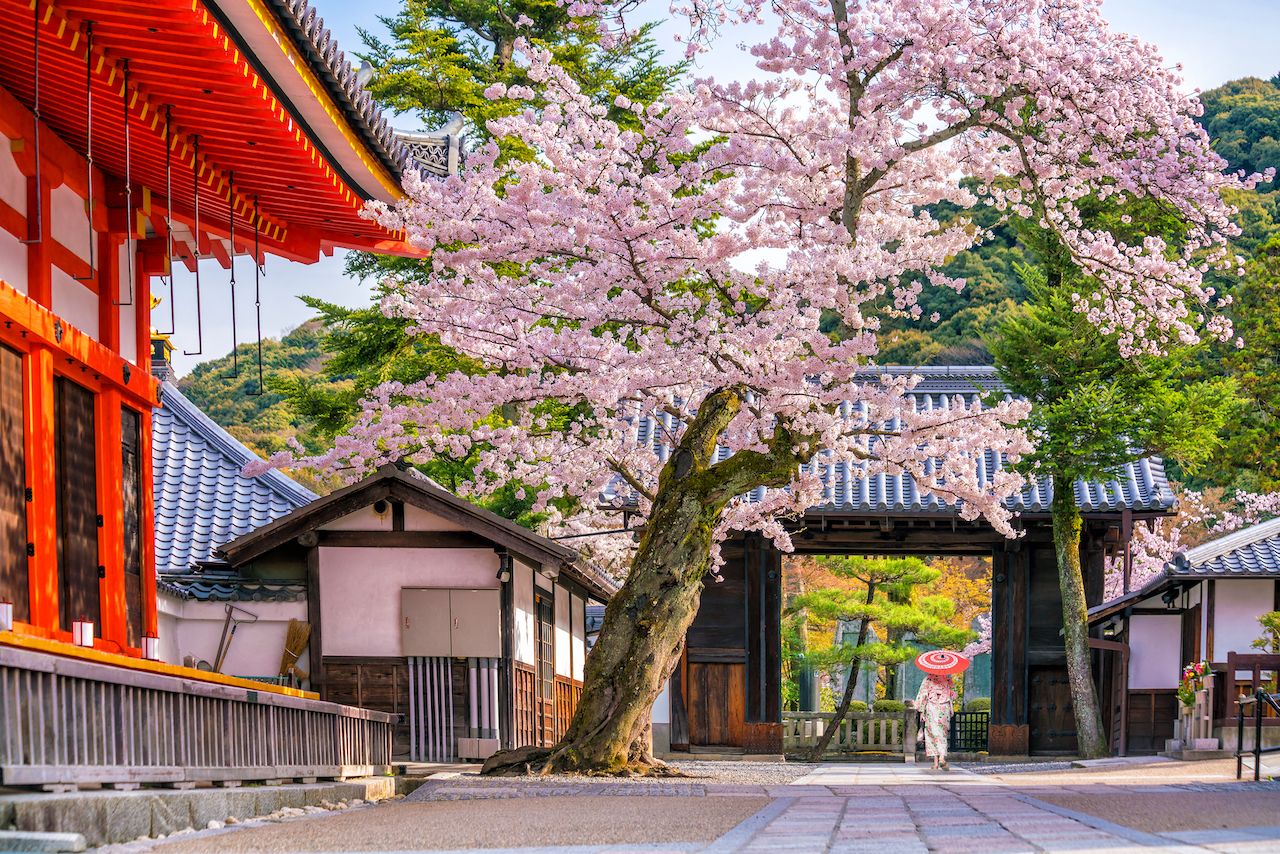 For many travelers, Japan is synonymous with cherry blossoms. For a few weeks each spring, the famous pink and white flowers bloom in Japan’s cities and across the countryside. And they’re not just popular among tourists. The Japanese even have a word dedicated to the custom of enjoying the beauty of the flowers — hanami. Special hanami parties and picnics are often held in springtime for the purpose of gathering to enjoy the blossoms. Kyoto is one of the best places to see the cherry blossoms en masse, usually starting in mid-March and peaking in the first half of April.

With its hundreds of cherry trees, the Philosopher’s Path between the Ginkaku-Ji and Nazenji Temples is one of the best places in Kyoto for viewing the blossoms. Maruyama-Koen Park is another excellent (and very popular) viewing spot as the blossoms are illuminated from dusk until midnight. 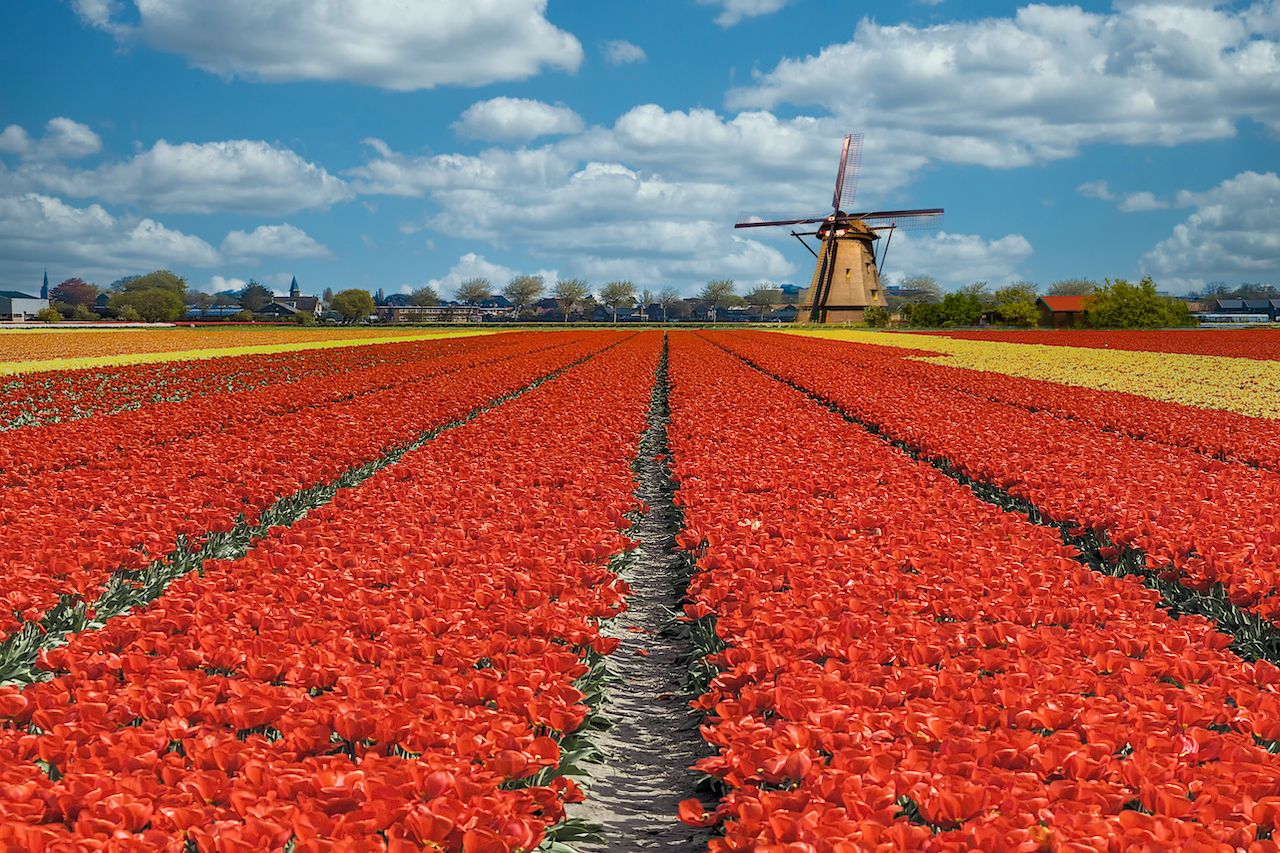 About 35 minutes southwest of Amsterdam, Lisse is considered the epicenter of the Netherlands’ bulb and flower production, exporting its flowers to hundreds of countries around the world. The sandy soil around Lisse makes it particularly conducive for flower growth, and as a result, the fields around the city bloom with color.

The Netherlands isn’t exporting many of its iconic tulips abroad this spring, as public flower festivals and displays are canceled, but that only means the country is keeping all the floral beauty for itself. Keukenhof Gardens, located in Lisse, is the largest flower park in the world with over seven million flower bulbs. Composed of four pavilions and multiple gardens, the park houses a wide collection of tulips, hyacinths, daffodils, orchids, roses, carnations, irises, lilies, and other flowers. 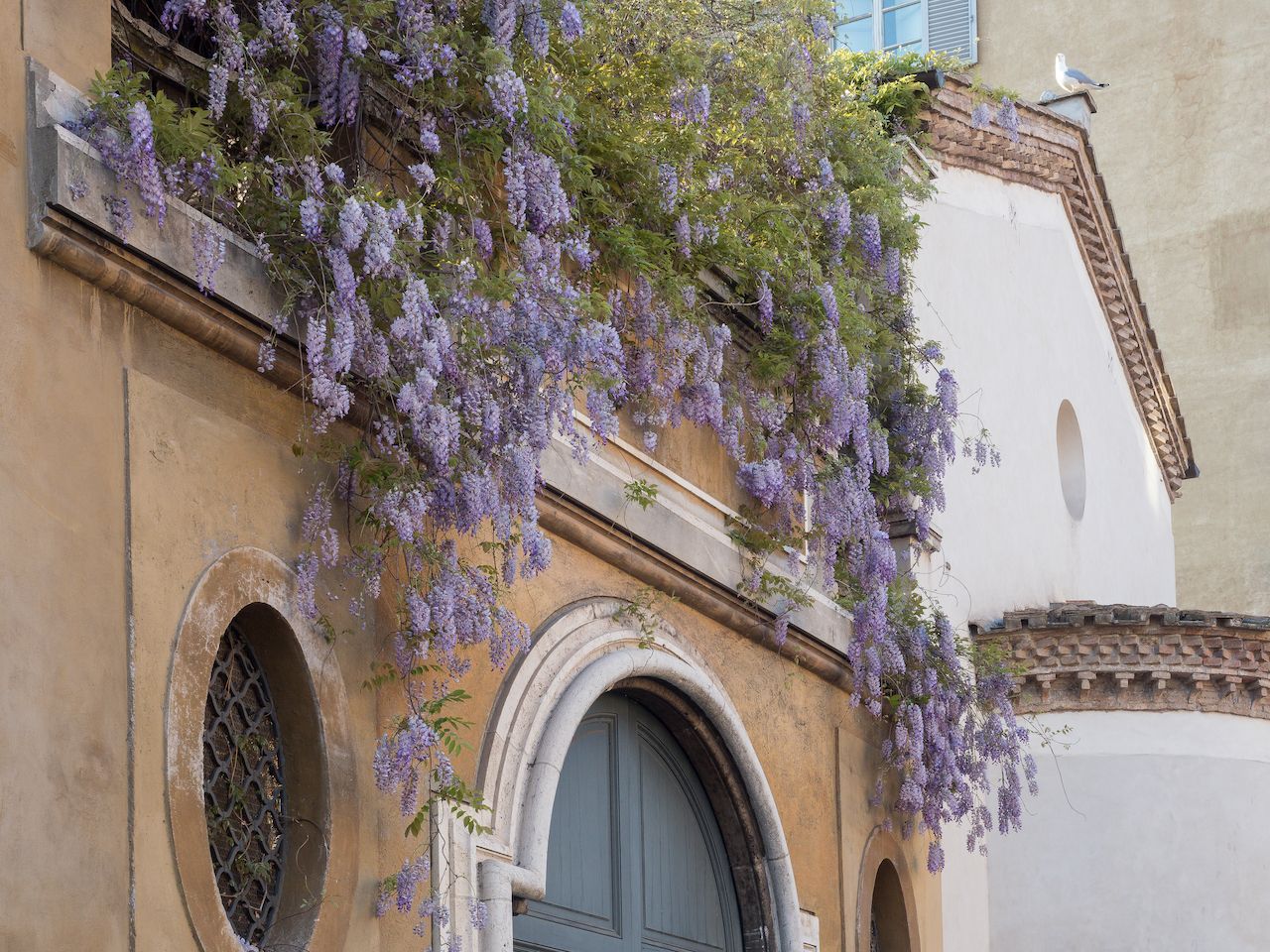 April is wisteria season in Rome. Unlike the tulip fields of the Netherlands or the wildflowers in California, you don’t have to venture out of the city to see it. Purple wisteria hangs from rooftops, graces the sides of ancient buildings, and forms canopies over courtyards all around the city. Although the plant is native to China, Japan, and South Korea, it’s become as synonymous with spring in Rome as the cherry blossoms in Japan.

The Villa Celimontana park on the Caelian Hill is one of the best places to see Rome’s wisteria, as well as the Roseto Comunale garden, Via Margutta, and occasionally even the Roman Forum. Since the colors are so striking, you could probably just wander aimlessly around the city without any real risk of missing the blooms. 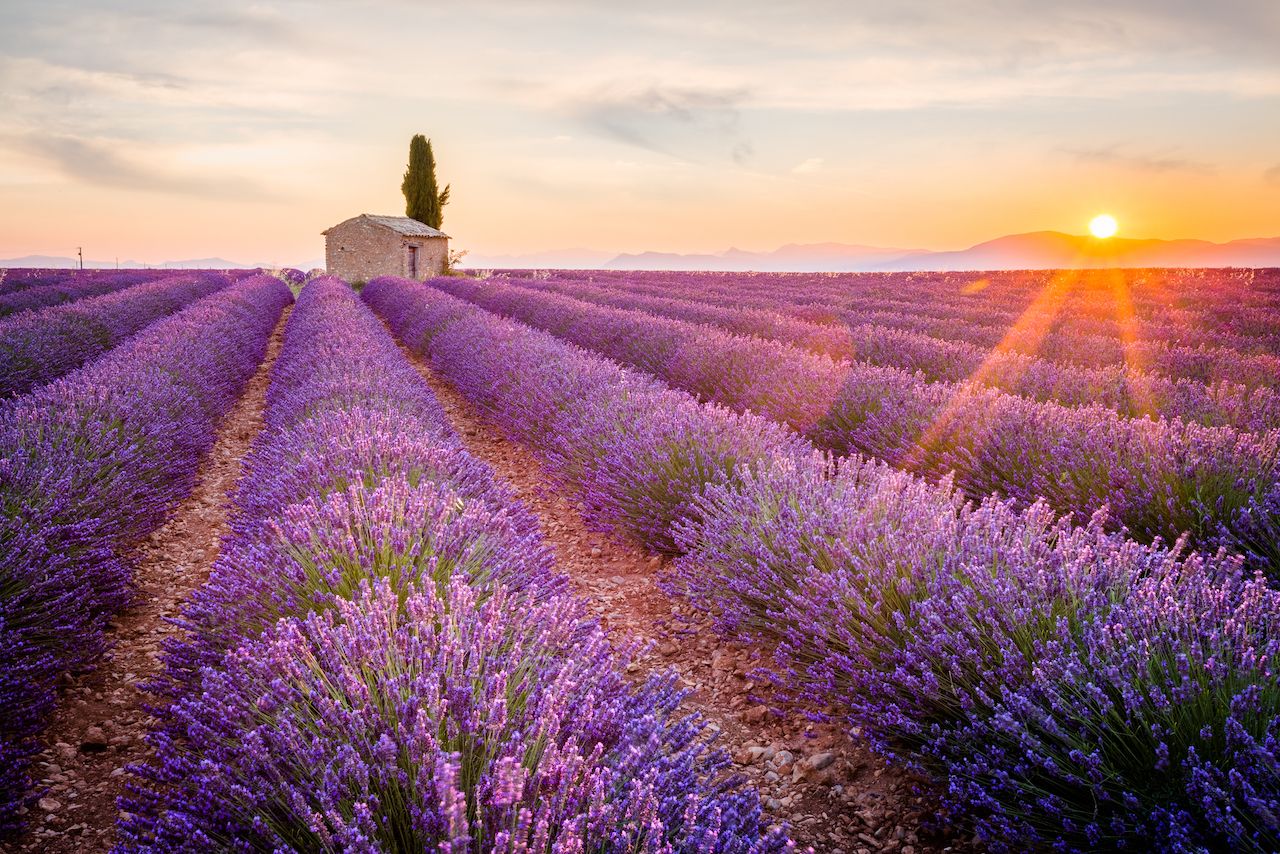 Whether it’s because the color isn’t often found in nature, or because it carries a regal air, there’s something special about purple flowers. Provence, a region in southeast France, is home to one of the most stunning collections of purple in the natural world with its abundant fields of lavender. Nothing signals the death of winter more triumphantly than the blooming of lavender in Provence, often as early as May.

There is no shortage of lavender fields in the region, primarily around the village of Valensole. The village’s pastel houses are rivaled only by the colorful flowers in neighborhood gardens, and in the surrounding fields. Saint-Croix-du-Verdon, a village on the other end of the Valensole Plateau, has similarly striking fields overlooking the Lake of Sainte-Croix. 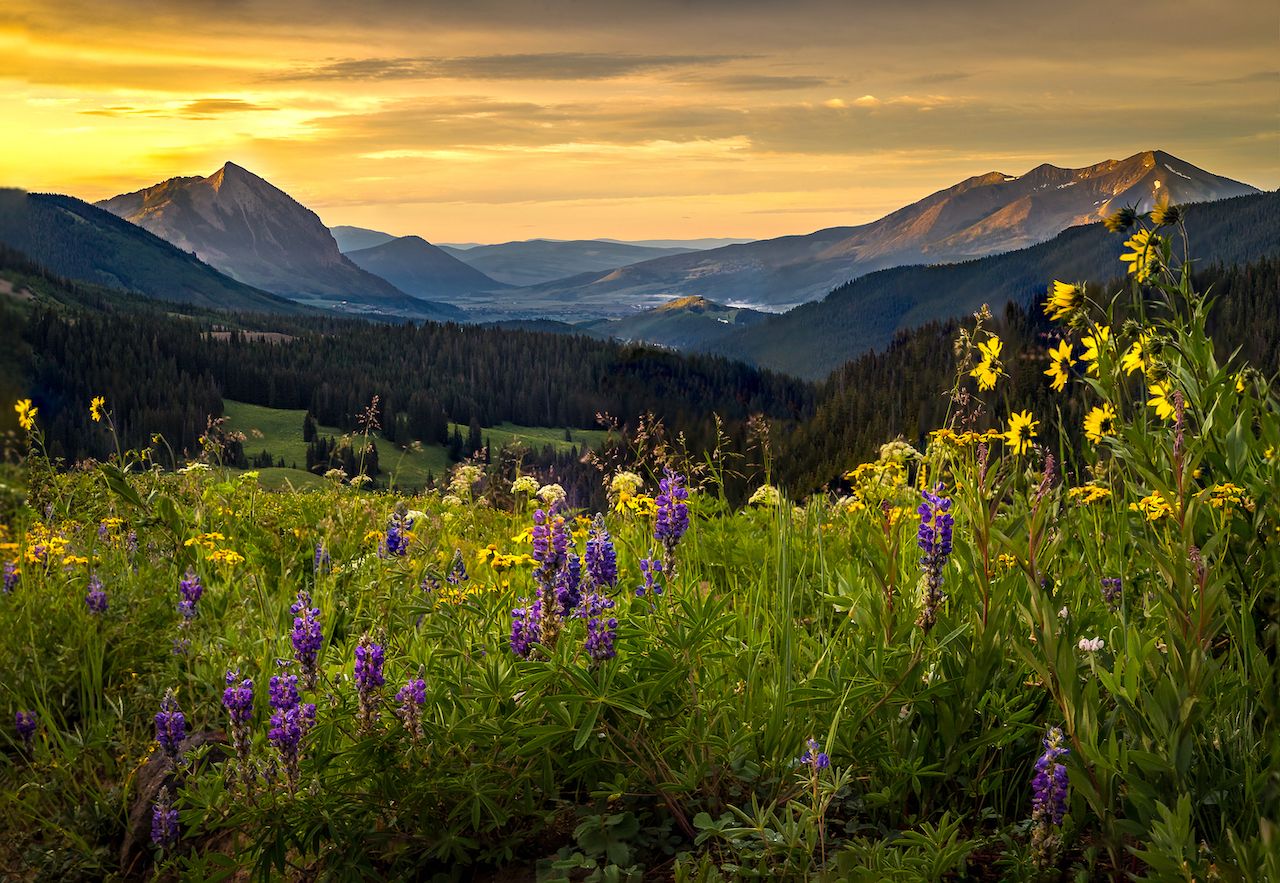 People handle winter in Colorado a lot better than they do in the rest of the country. That’s partly thanks to the ski resorts and partly because Coloradoans seem to have an inhuman tolerance for the cold. But even Colorado natives look forward to the coming of spring because the state sees some of the best wildflower blooms in the country once the weather warms up.

Crested Butte, about four hours southwest of Denver in the West Elk mountains, is home to some of the most colorful flower displays you could hope for. In the spring and summer, the town of just under 2,000 residents is bustling with visitors eager for a glimpse of the pink, gold, and orange wildflowers (and later in the summer, sunflowers). Officially titled the “Wildflower Capital of Colorado,” it’s no surprise there are several wildflower trails through the nearby hillsides, offering views of purple fringe, elephantella, blue columbine, sneezeweed, and alpine sunflowers. 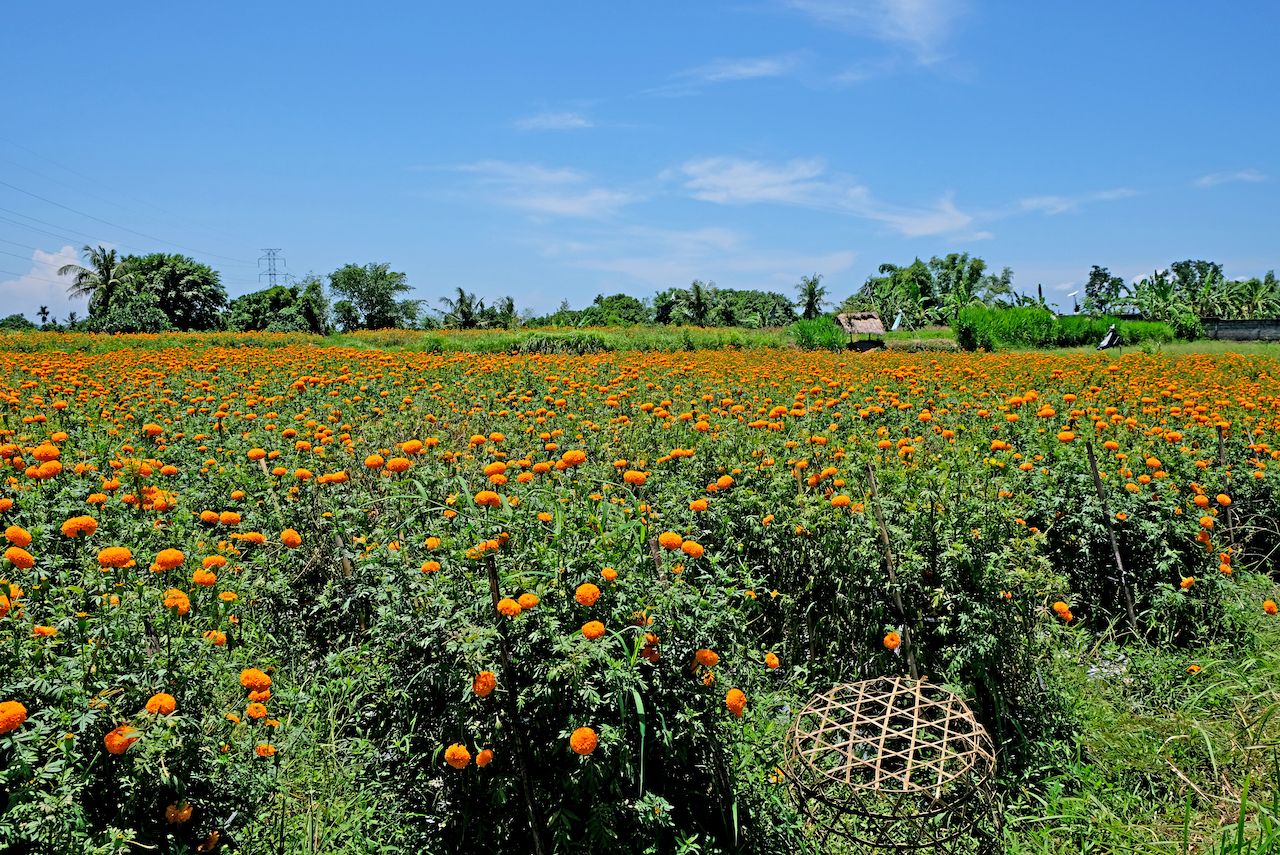 Bali is famous as a destination for digital nomads and Instagram influencers, but the island’s flowers often take a backseat to its beaches and rice fields. This is unfortunate because Bali is home to some of Asia’s most beautiful marigold fields. Known as taman gemitir by locals, marigolds figure prominently in religious rituals at temples and festivals, making the Petang Marigold Field an incredibly important site.

The marigold field is located just outside Petang village, along the route between Kintamani and Bedugul. Since farmers usually harvest the flowers at the beginning of each month, it’s best to visit in the middle of the month. In addition to the flowers themselves, the field is located along a mountainous road, so you’ll also be treated to some incredible views of the surrounding countryside.

The 11 hardest, most dangerous mountains to climb in the world
For the perfect day of hiking and Colombian coffee, head to Jardín
California said to stay close to home, and that turned out to be a great thing
How to make the most of New River Gorge, America’s epic new national park
More Brazilians are giving up meat, and that’s great news for the planet